Welcome to the Wild West: Beginning the Pacific Crest Trail

“I think this log opens,” Peanut Butter said, tugging at the fallen log near the monument straddling the US and Canada.
“I can see why they’re replacing the monument. Look! The front of this one is falling off! I’m pretty sure it wasn’t designed to do that.”
“I found the log book! Someone is offering to do favors in exchange for…pants?”
“Well, no champagne? I think I’m going to go pee in Canada.” We may or may not have all gone and peed into Canada…but no one crossed the border!
After 30 minutes of poking around in the bushes and searching for hidden panels, Kylie, Nightwatch, PB, and I gave up. The champagne must have been found by an earlier group. Oh well, maybe there will be another bottle at the Mexican border. We’ll just have to hike 2,650 miles to find out. But, that isn’t how this trip started.

Getting to the West Coast

After three hours of sleep and a six hour flight, we arrived in Seattle. We gazed out the windows in wonder as we flew over Mt. Rainier, which is this huge, looming ghost squatting on the horizon, and couldn’t believe the amount of snow! The landscape changes from dry, sandy slopes speckled with spruce trees, to snow-capped mountains running water every which way. The east coast is nothing like this. We have officially made it to the Wild West.
The plane landed and we struggled through navigating public transportation; taking the light rail to an alien REI filled with bright, clean gear, and sales reps who didn’t have time for grungy hikers in their tidy lives, and just barely made it onto a bus that would lead us to our Trail Angel. After jumping on and nearly breaking the change machine by stuffing all of my quarters in it at once in a panic (the bus had already started to move and I hadn’t paid our fare), we waited in bumper-to-bumper traffic, backpacks balanced precariously on our laps for two hours, finally making it through Seattle to our stop. Ryan, magical Trail Angel Ryan, was waiting there to sweep us away to giant burritos and strange new customs.

Pot is legal in Washington. It is not legal on most of the east coast. Out here, drivers pause for every pedestrian, even those who aren’t on sidewalks. They also tend to smoke a fair amount of pot while driving. The SUV wound smoothly through traffic at a slow, relaxed pace, puffing out smoke like some ancient steam engine, and we continued our crawl through the outskirts of Seattle.
After nearly 24 hours of travel, we had made it to Ryan’s. We ambled out to the back yard, pitched our tent, and got our first night of sleep on a foreign coast. We awoke at six the next morning (which is a leisurely 9 am back home) and commenced the five and a half hour drive to Hart’s Pass. The SUV wound its way through the mountains, which seemed to grow before our very eyes and become craggier with every bend in the road. The lakes were bluer than the sky. I’ve never seen land like this before!

As soon as we made it to the pass, it was like we had entered Wonderland. Indian paintbrush, purple lupine, and columbine blanketed the mountain slopes. Our feet kicked up gentle plumes of dust, caking our legs as we followed the curvature of the mountain. 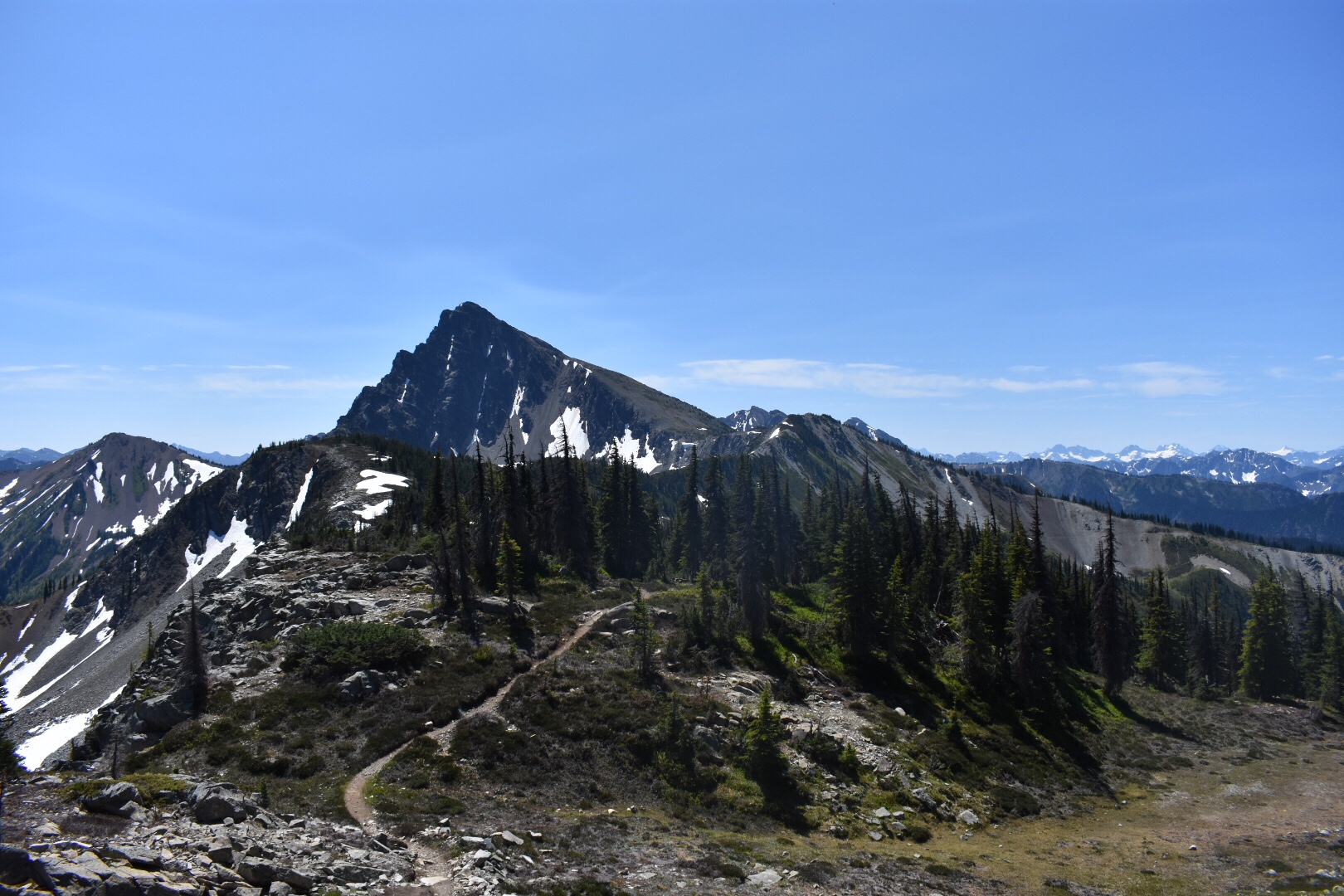 The first few days were magical and pretty typical of starting a new hike, but thankfully without any mishaps. We just finished hiking the Appalachian Trail, so we were feeling like backpacking pros. I hadn’t melted a pair of underwear yet, or cross-threaded a brand new stove like on the AT (stories for another time), and our packs had the perfect amount of food in them. Then, we tagged the border, had our champagne hunt, and went back to having weird stuff happen. We spent a day glissading, swimming in alpine ponds, and having snowball fights in 75 degree weather. It was perfect. We gazed up and the tops of the mountains, searching for new wildlife. Finally, we spotted three mountain goats on top of a ridge line. We stopped, ooohed and ahhhd over them, taking pictures of the funny, fluffy creatures, and continued on. Apparently, so did the goats.

They followed us back to our camp and, after we had been conked out for a few hours, snuck in to eat our gear. I woke with a start at 1 a.m. to a munching near my head and had to play tug-of-war with a goat that was trying to eat my backpack from under the rain fly of the tent! It sounded like some huge, monstrous creature because the hard-packed dirt acted like a drum, but finally, the creature thundered off.

The next morning, my partner PB and I got up to check the damage. Everything was fine, except for our trekking poles. The goats had devoured the straps in their search for salt, and we were left holding slime-covered handles with wet, torn straps that slapped against our wrists. Beware the wildlife, my friends. Keep your gear close, and keep your poles closer. I love it out here. 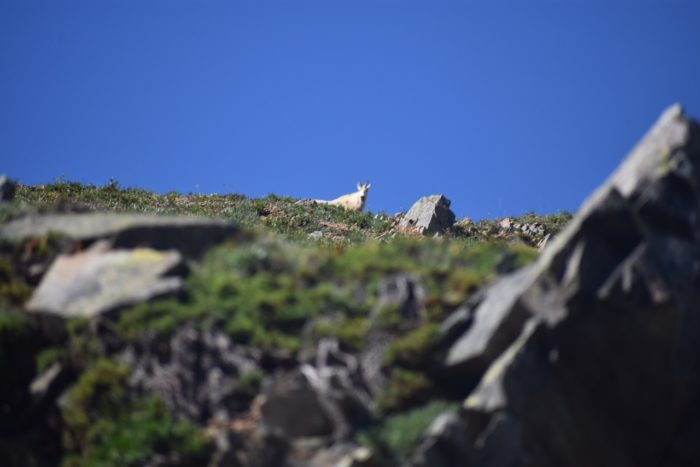