What Worked and What Didn’t

Here’s a short list of gear that performed better or worse than I expected on the PCT. I couldn’t hike the entire trail due to fires and closures, but I did cover enough distance to put these items through their paces. Including detours and resupplies, here are my approximate SOBO 2021 mileages.

This is the first time I’ve closely tracked hiking-boot mileage, and the boots lasted longer than expected. I thought they’d last 800~1000 miles, but they ended up being capable of 1200 miles. I began WA/OR with a new pair but started southern California using a pair with about 400 miles on them. 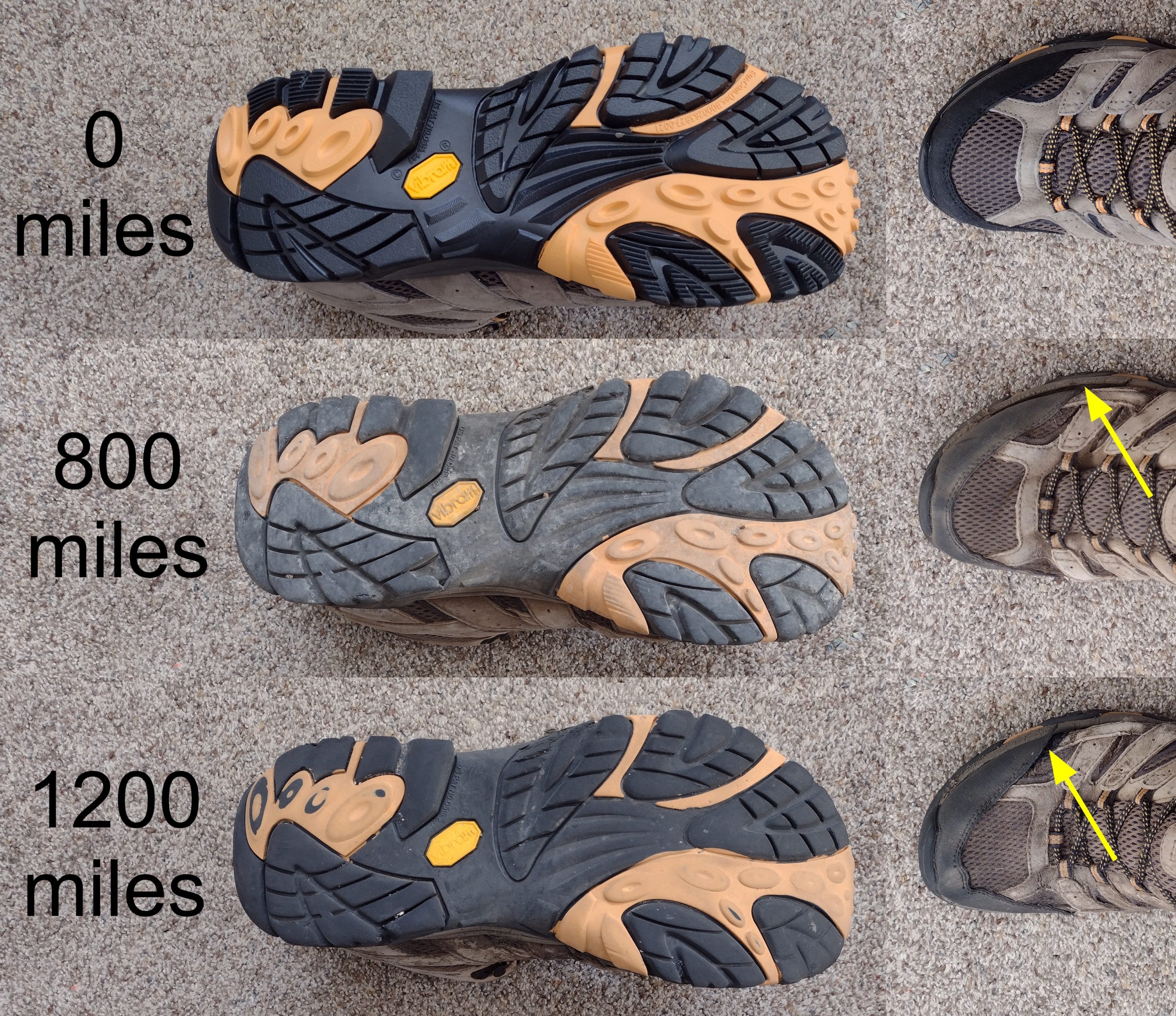 Why I use boots

I’ve only used trail-runners twice when hiking, and on both occasions, I lost a big toenail on my left foot. I shouldn’t draw conclusions from a sample size of two, but I don’t really want to experiment further. Losing a toenail is painful, and I’m in no hurry to do it again. Those shoes were up-sized correctly, broken-in, had plenty of mileage left, and I was using the standard lacing pattern. (If a running shoe makes the top of my foot go numb, I switch to bar-lacing.)

Both toe problems occurred during day-hikes involving a big descent, but I wasn’t aware that my feet were slipping forward inside my shoes. They were laced as tightly as usual and I’d clipped my toenails beforehand. And yet I still ended up losing a toenail.

So, apart from those two occasions, I’ve always used mid-cut boots for hiking. It’s possible the extra ankle support stops my feet slipping forward as much. I’ve heard that “a pound on the feet is worth five on the back”, but I was happy with the weight of the original Moab. I’ve been happy with the performance of the update too. The non-waterproof version dries faster when the inside inevitably gets wet.

Both of these sock brands were comfortable and durable – the socks I’ve tried in the past have been either/or, but rarely both. I covered more mileage than usual in my first few days on trail, and I still had fewer blisters than expected.

Whichever pair of socks I wasn’t wearing, I’d rinse, dry, and wear the following day. Using two different brands allows for potential problem locations (e.g. the toe seam) to be positioned slightly differently from one day to the next. Any time I had to wear the same pair for more than a day, I’d increase the number of days I wore the other pair accordingly. It’s not a perfect side-by-side comparison, but it’s close enough. I used the same socks for Washington, Oregon, and southern California. That equates to 800 miles per pair of socks. 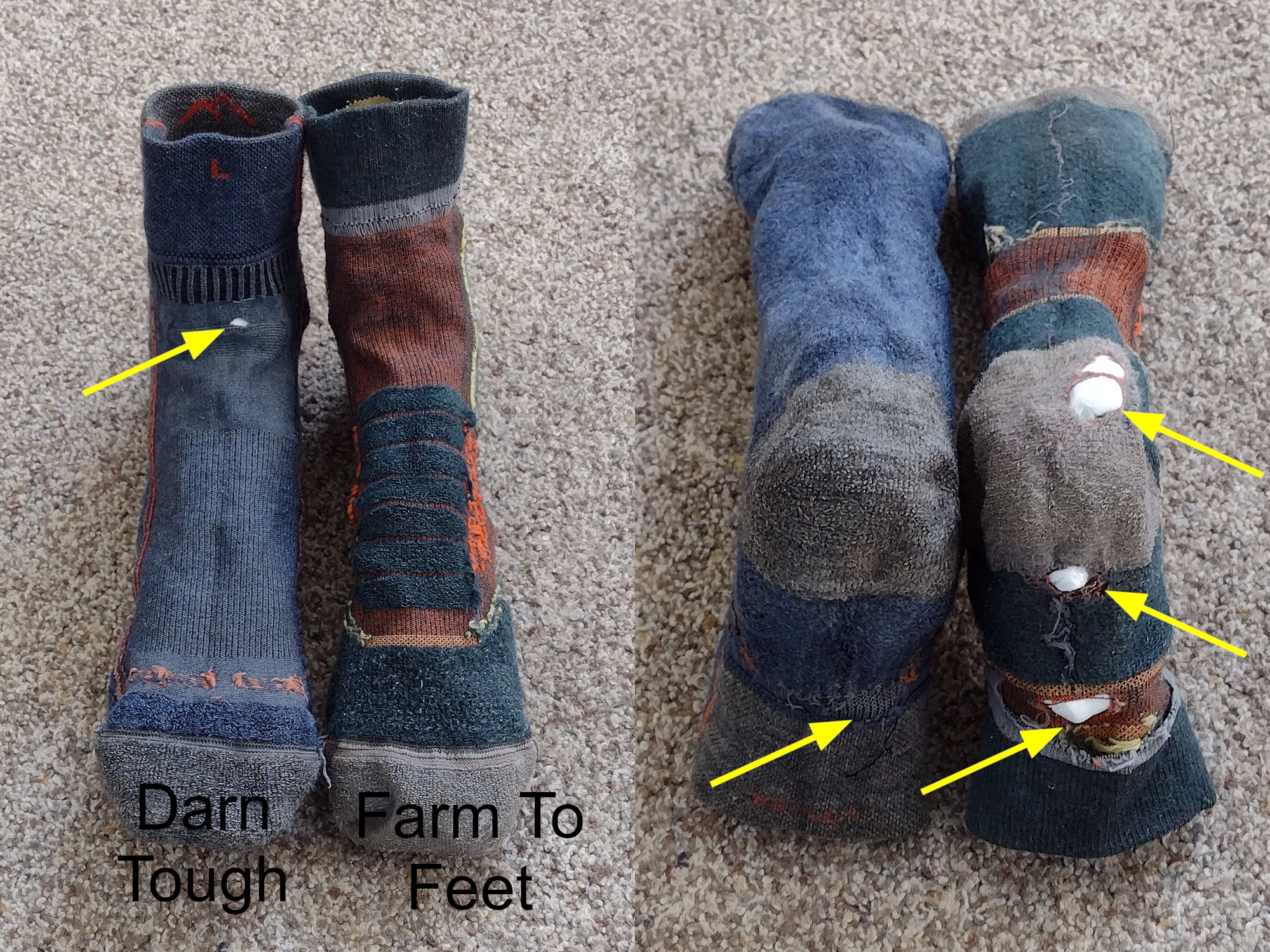 The socks, inside-out. (And filled with packing peanuts.)

The day I arrived at Campo, I lost one of my Darn Tough socks. It was windy, and I took them off to dry before getting on the bus. It’s possible the sock just blew away, but I think it’s more likely it actually ran away. The socks had been worn for five days without being rinsed, and judging by their smell, were teeming with bacterial life. The newly self-aware sock simply sensed an opportunity and made a break for it. So, if you’re in Campo, and you see a blue sock like the one in the picture above: beware. It’s Darn Tough and probably has a mean streak. Approach with caution.

Using Farout (Guthook) is much more convenient than navigating with a map and compass. I carried the GPSMAP64 as a backup device in case my phone died. Except in wet weather, when I used the Garmin rather than risk my phone.

In the desert, Farout was more than just convenient – it was invaluable. Specifically, its waypoint comments: a big thank-you to everyone who updated them. At the end of a very dry season, having up-to-date water-source information was vital. My only problem with the app is that I found a couple of minor bugs and no way to report them.

The GPSMAP64 has a tiny screen compared to a smartphone, and its “Trailhead Series – PCT” map costs $50. The map’s PCT track is out of date in many places (e.g. crossing the Suiattle River), but it does contain other details that are helpful. The Garmin becomes a useful secondary device with the addition of Halfmile’s GPS data. Recent re-routes of the PCT mean that Halfmile’s data is out of date in a small number of places (e.g. a windfarm north of Tehachapi).

The tent was a little over two years old when I started the PCT, and within two weeks of starting, its zipper began to fail. A few days later, it wore out completely.

“Come on in. The zipper’s broken.”

“Thanks! By the way, have you met our friends, the Ants?”

But, I hear you say, that’s not funny. And you’re right. Especially if you happen to be in Washington at the height of mosquito season. Without a functioning door, my tent was essentially just a heavy tarp. When I had to leave the trail, I also had to buy a new tent. 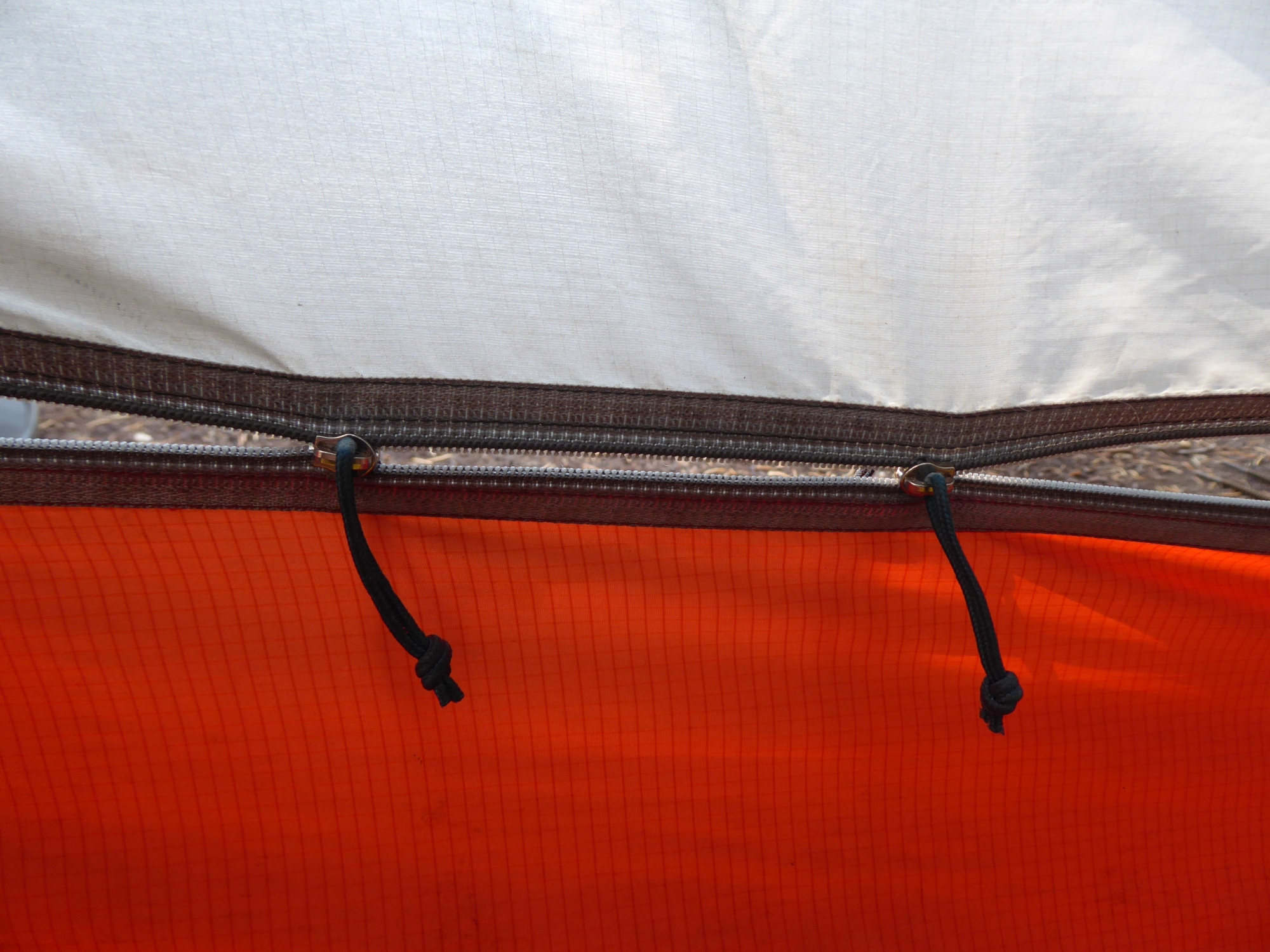 This is not what a closed tent door should look like.

Despite syringe back-flushing regularly, the flow rates of the Squeeze and the Mini dropped much faster than I expected. The Sawyer website states that the Mini has “longevity up to 100,000 gallons.” Mine lost most of its flow long before it had filtered 100 gallons. I’ll go into detail in my next post.