What’s in a Name? A Choose-Your-Own-Adventure History of Mt. Whitney

It’s a beautiful mountain. A spiritual place. A miracle of nature. The summit of Mt. Whitney is a confluence of so many different experiences. It’s the culmination of the John Muir Trail, it’s one of America’s most popular technical climbs, it’s a cherished detour of PCT hikers, and it’s also an important stop along native trade routes. But, despite all these different parts of its history, we almost forgot one other thing.

That’s right. Do y’all remember that one time we almost named one of America’s most beloved mountains after an alcoholic racist? It’s easy to forget. Who could blame us? After all, how else does one usually cope with a nightmare except by trying to squash it with the boot of time.

That’s right. In 1965, America almost decided to name Mt. Whitney after Winston Churchill. It’s a name that, as far as I can tell, may have been proposed by the U.S. Geological Survey itself, and I can’t imagine a historical figure with a more controversial legacy. You know? He was the prime minister who blundered through World War II and spent the better part of his life amassing a whole encyclopedia of racist, bigoted quotes that can’t really be contextualized or justified.

And yet, after he died in 1965, there was still a bizarre and jingoistic movement to rename Mt. Whitney after him. This movement apparently garnered enough attention to gain coverage in national newspapers. I guess I’m just having trouble imagining that: the highest peak in the continental U.S. Named for a guy who systematically subjugated and disparaged the people of India and other nations, and spoke openly about his belief in white supremacy. I get that times were different, but dang, it’s hard to imagine a sunrise hike to Mt. Churchill on the PCT, or ending a JMT hike at the Churchill portal. 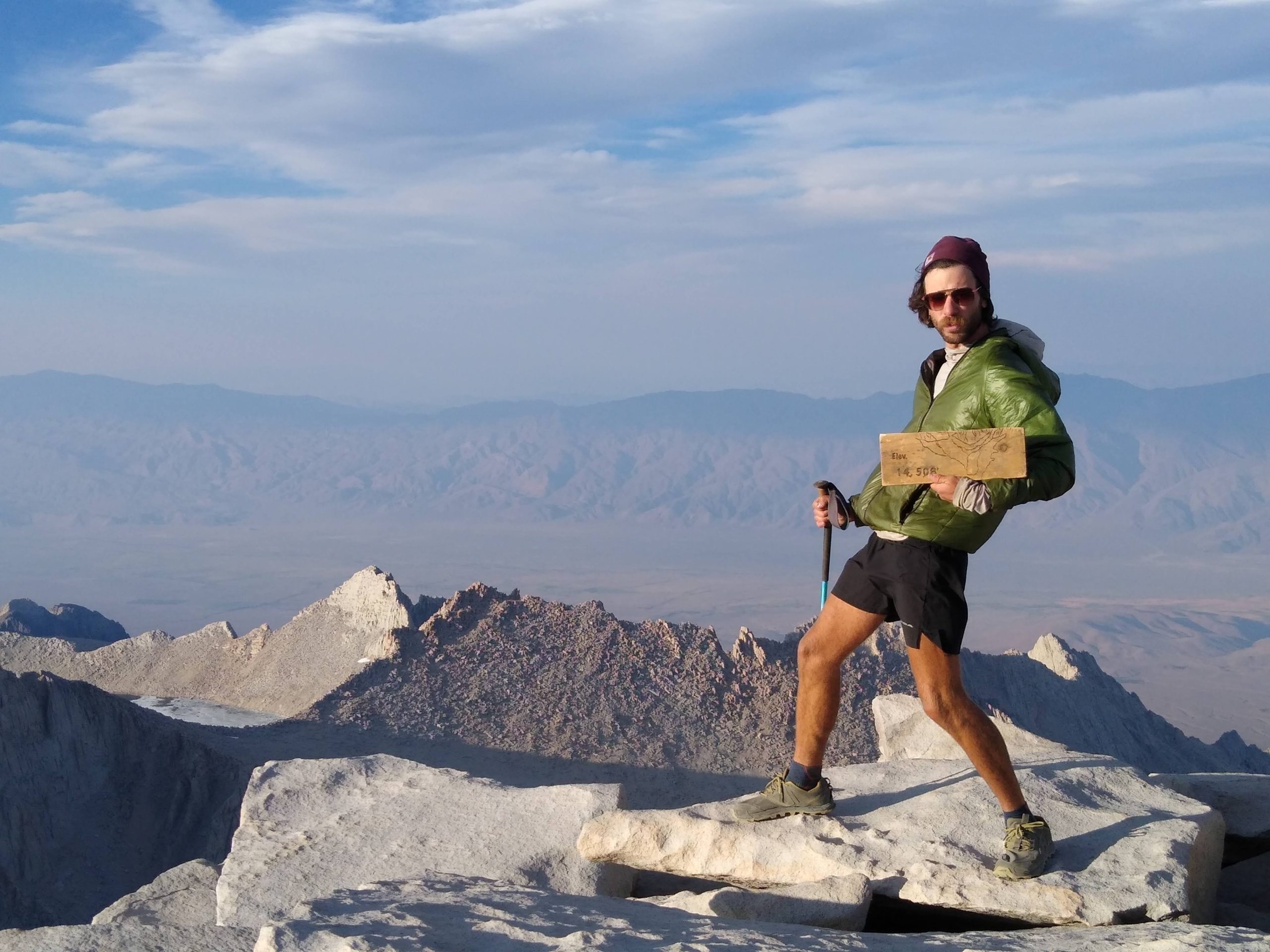 They’d have to change the little sign at the top too.

And listen, I’m not here to debate the merits of Churchill’s legacy, or how history’s opinions have shifted about him (here’s a great podcast that covers a lot of that), I just simply can’t imagine a worse way for America to go about naming its geological features.

And while we’re here, we may as well wonder, on a metaphysical level, what compels us to name geological features at all. Is it masculinity?  Tradition? Posterity? I don’t know. But I always wished we could’ve gotten a little more creative in our name game too, you know? I mean, how fun would it have been to do a sunrise hike to Mt. Don’t Forget to Call Your Mother? Or to camp at the summit of Pumpkin Spice Is Kinda Gross Mountain? 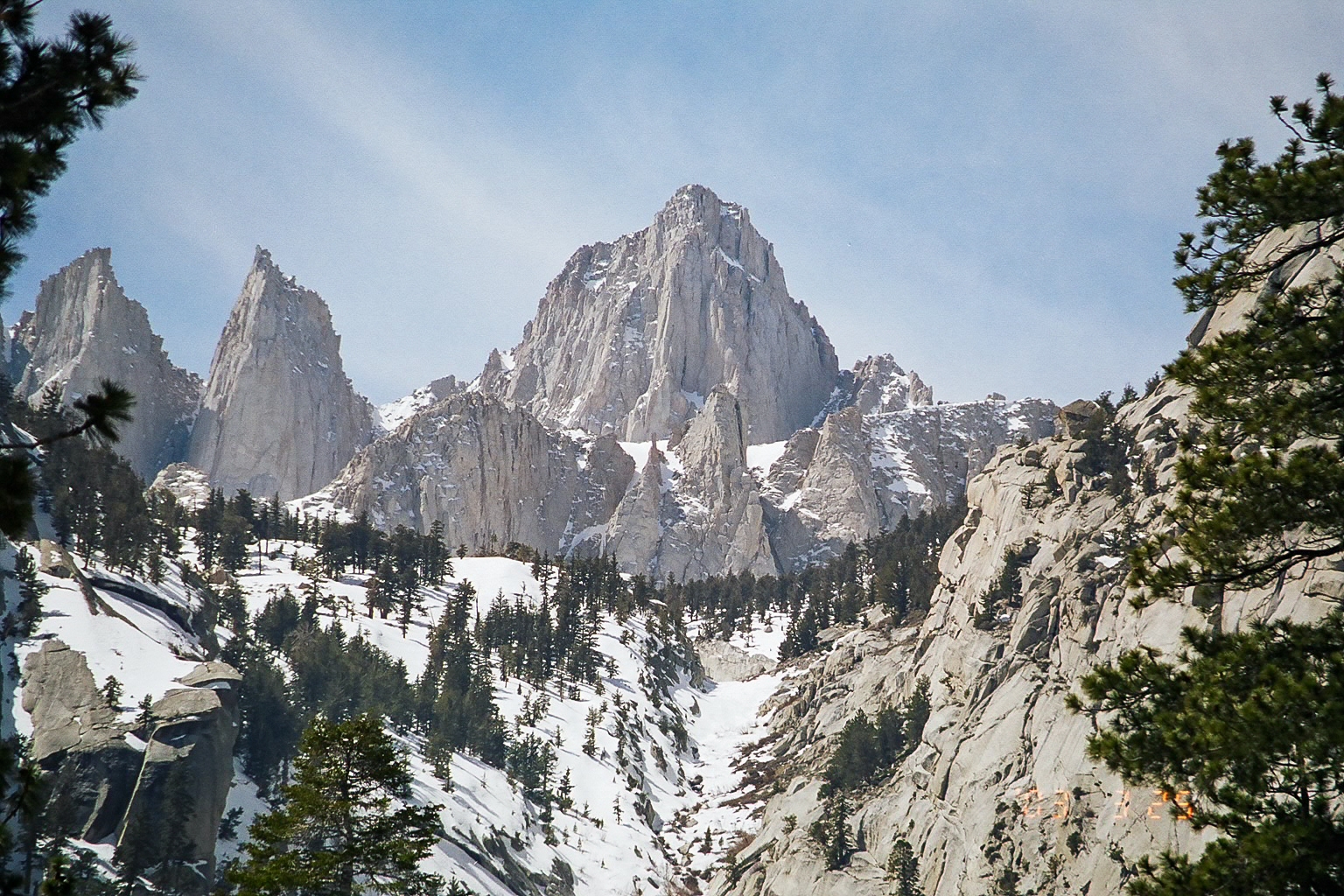 Because that’s the hill I am going to die on. Photo via Wikimedia Commons.

Although, as I came to find out, the name “Mt. Whitney” itself isn’t even close to the first name change the mountain has undergone.

To start, the first known name for Mt. Whitney is the Indigenous name Tumanguya, which means “old man” or “guardian spirit”, depending on which source or translation you consult. The word “Tumanguya” itself comes from either Northern Paiute or Shoshoni, two similar Numic languages which were both historically spoken in the region.

READ NEXT – Native Lands Along the Pacific Crest Trail.

The mountain is along one of many trade routes through the Sierras that native tribes of the area historically used, and its location forms part of what is known as The John Muir Trail, also referred to as the Nüümü Poyo, or “people’s trail.” The name Tumanguya is a great way of preserving the native peoples’ cultural and historical relationships to the Sierra, and it certainly doesn’t carry within it a bunch of controversial opinions on phrenology, women, or India.

But Whitney wasn’t even the first anglo name for the mountain. According to other accounts, the first residents of nearby Lone Pine, CA had informally called it Fisherman’s Peak for a number of years. “And just why did they call it Fisherman’s Peak?” you might be wondering. Well, buckle up, because you’re in for one hell of a humdinger:

As the story goes, apparently some of the locals in Lone Pine had climbed the mountain on a recent fishing trip. Then they got back to town and wanted to remember what a great fishing trip they’d just had. And what better way to commemorate such a nice fishing trip than to name a mountain after it? I sure can’t think of one. 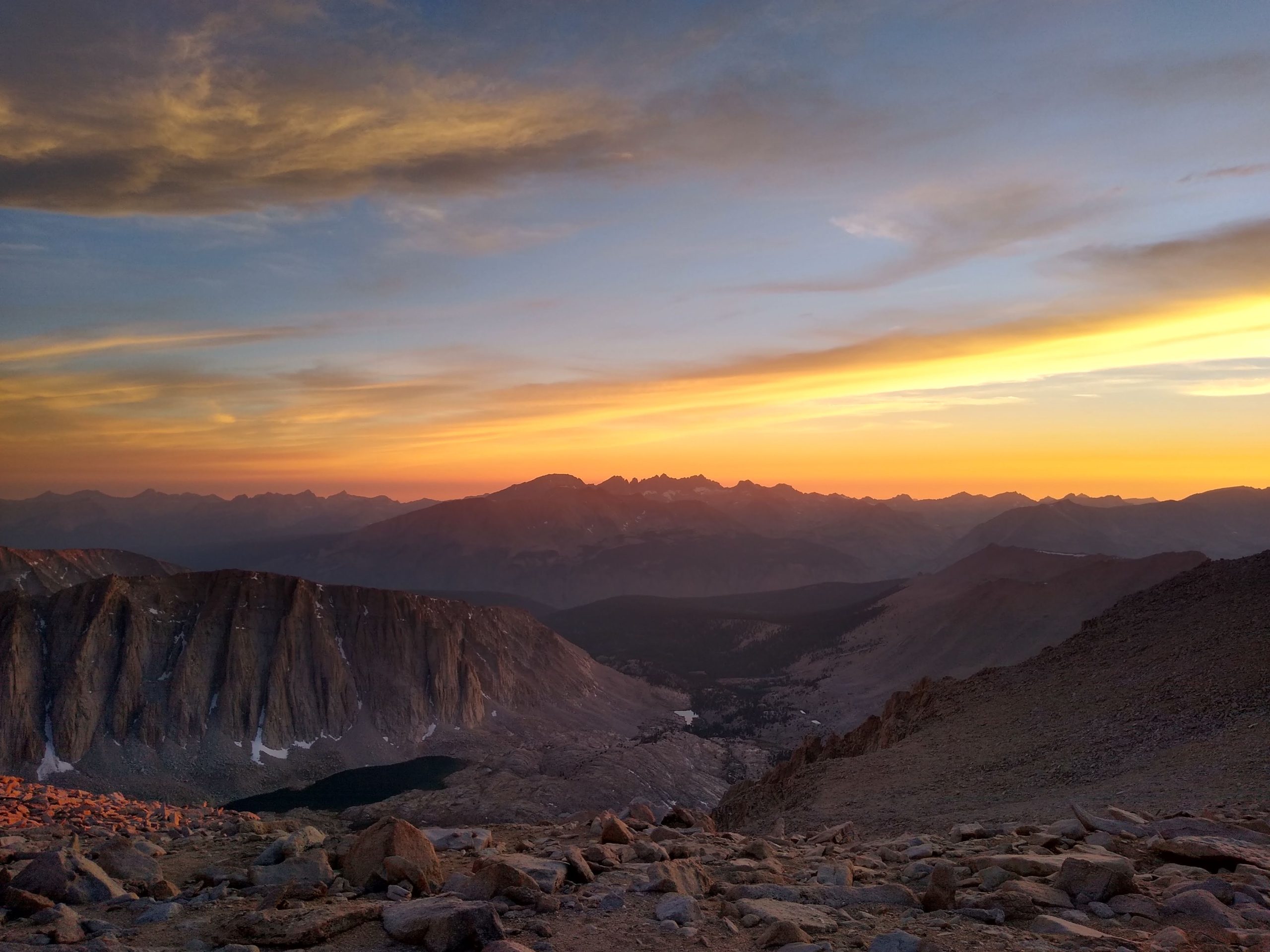 Sunset over Guitar Lake which was, as one might note, curiously bereft of fish. Coincidence?

History has its own way of working things out. Maybe it erases what it needs to erase. Maybe it preserves what it needs to preserve. Maybe it saves the conversations around naming things until they are the most poignant. All this being said, I am sad to report that unfortunately, by the time the locals of Lone Pine submitted their formal proposal to rename the mountain after their fishing trip, the USGS had already accepted the name of Whitney.

And who was Whitney anyway? Well, he was a few things. He was definitely what some might refer to as a coastal elite: Ivy League graduate, big tour and study abroad trip in Europe, intrepid explorer of the west, etc., etc. But, in short, he was California’s state geologist, and he was the leader of the geological survey party that first officially summited the mountain.

That’s about all that most folks probably know about him, which is fine because it feels like those are the only Big Facts. But I found it interesting to also learn about what his work as the state geologist actually included. You know how you have that friend who studied geology in college just because they wanted to get a job with an O&G conglomerate in Houston? That was essentially Whitney. He was basically being bankrolled by corporate and speculative interests in the state to find gold or, at the very least, natural resources that could be exploited for profit. This was based on his previous lucrative work surveying different parts of the midwest.

READ NEXT – How to Train for (and Hike) Mt. Whitney, the Tallest Peak in the Lower 48.

To his credit, Whitney ultimately rejected the state’s motives for funding his geological survey. Instead of contributing to the scientific record, he felt he was being pressured to only survey the parts of California that could be mined and drilled. And so, even if he was only being paid to conduct the survey in the name of profit, he also believed in the scientific importance of it. I guess that makes him a somewhat complex man. Although I always hate it when people only seem to develop moral backbones after they got rich being spineless.

But regardless, Whitney’s adherence to scientific method and devotion to carrying out a complete survey—even amid infertile and un-mine-able lands–ultimately led to the complete defunding of his survey in 1864. This was four years after his party had summited the mountain that was subsequently named for him. There is also evidence of his humility in accounts that say he never wanted a mountain to be named after him in the first place.

I understand that the cultural reasons for officially renaming Mt. McKinley to Denali in 2015 were a bit more pressing and self-evident than those surrounding the naming of Whitney. After all, it was the easiest and most obvious way for an American president to demonstrate that he was making meaningful moves towards repairing relationships with native tribes and people. McKinley probably couldn’t even have pointed to Alaska on a map, and only curried favor with white prospectors in Alaska who liked his policies surrounding the gold standard. This was over a century of common sense that had been politicized to a point that it entered the mainstream. And on the other hand, in California, Josiah Whitney at least summited the mountain that was named after him.

But I do find it interesting that there doesn’t seem to even be much debate or discourse around the renaming of Whitney. What factors into society’s complicity with a name? How do you decide which one to choose? Was the renaming of Denali simply just another symbolic act of political theater? And will we have to wait for similar theatrics to rename Whitney? (or any others, such as maybe Mt. Evans or the General Sherman in Sequoia)?*

Maybe I’m just reading too much into it, but it seems to me that each of these names, in their own ways, are similar acts of cultural imperialism. In each instance, there was already a name for these geological features long before the first surveyors and prospectors explored the area. And furthermore, would it make a difference, would the renaming debate be spicier if the Churchill proposal 55 years ago HAD gone through? Perhaps.

And besides, all this being said, it turns out that it’s unbelievably easy to submit an application to rename (or name!) a geological feature in this country. All you have to do is fill out a fantastically bureaucratic form on the USGS website and wait to hear back from them. So why not give back when you can?

*Although, clearly the 19th and 20th century American cognoscenti in charge of naming stuff had a massive soft spot for historical figures who carried out state-sponsored genocides. So that one may take a while. Regardless, I found it really interesting and intriguing to learn that The General Sherman Tree was also briefly referred to as the Karl Marx Tree. Can you imagine!