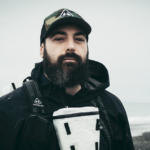 Why am I hiking the PCT?

I didn’t grow up camping, I went on some hikes growing up in New Hampshire but I didn’t know I was right next to the Appalachian Trail or that through hiking was something people did.

The first time I did something like backpacking was in Afghanistan in 2010. I was a Corporal in the Marines at the time, with my pack weighing about a hundred pounds not to mention the rifle, pistol, or ammo. There was nothing ultralight.

I was on a mountain overlooking the Kajaki Dam. We had some small buildings some people slept in but I preferred to sleep outside on a cot. The U.S. Marines were taking this outpost over from the Royal Marines so there were maybe a dozen of us hanging out. During the day we would “play shit-head for hot wets,” shit-head being a card game the Royal Marines played and the loser had to make everyone tea, the proper British way.

The interesting thing about this spot was that the Taliban had the surrounding area so the only way in and out was by helicopter. When one aircraft was shot down nearby we were in a no-fly zone for a while around the time I was supposed to leave. I didn’t have much to do besides play shit-head for hot wets.

Sleeping outside with an amazing view of Afghanistan was immensely peaceful. I know there were people nearby looking to shoot us or trying to shoot our aircraft down but standing on top of that mountain, sleeping under the stars, all stuck with me.

I wish I could say I came back and started backpacking but instead I finished out my time in the Marines and then went to college.

After college, I decided to move to Portland Oregon, and would kind of backpack along the way so I wouldn’t have to pay for hotels. My friend gave me a backpack and I bought a bunch of random supplies.

I stayed at a National Forest in Nebraska, which surprisingly there is one. My pack probably weighed 40-50 pounds. I had never thought to think about the weight of my back, I knew I could carry whatever fit in my pack.

Next, I was supposed to backpack in Yellowstone but it was going to be below freezing and raining or snowing. I knew I didn’t have the gear, I had enough to backpack in nice weather but no coat and my sleeping bag was a 30 or 40-degree bag. I could see the headline, “Idiot Marine freezes to death because he didn’t bring a coat,” so I skipped it and started my life in Portland.

Life took over for years, I did a few small trips but never got the right gear.

Like many in 2020, I got outside, I had to get outside for the sake of my mental health. I started with car camping. By the end of the hiking season in 2021 I was backpacking every weekend. Then in 2022, I was going every weekend and even did Timberline Trail and Wonderland trail. I was hooked and I went full ultralight. Due to my time in the Marines my back and knees are trashed so going ultralight helps a lot.

Backpacking has filled a void that the military left. In the military we were always doing things that were hard physically and mentally – we were always being pushed. After getting out you don’t have to do anything challenging. Now that I have been backpacking a bunch I see how much I need challenges in my life. It is a mental and physical challenge to pack a bag and survive, especially at a time when we can have anything delivered to our home at any time.

The military was a lot of type 2 fun, well also type 3, as a punishment we once had to low-crawl through sewage runoff. The type 3 fun I can do without but for years I was missing the type 2 fun, being out in the woods and having to solve a problem with just what’s in your bag.

Also, with going into the military and then college, I never had some of the experiences some of my peers did. I’ve had friends who traveled in their 20s or friends who went on backpacking trips like the PCT. I’ve never really had a time in my life where I could not work or go to school for months. This is the first time in my life that I will be without income purposely.

It’s almost my 7th year in Portland, I can’t believe I’ve been here this long – I get pretty anxious being anywhere more than 5 years – and I can thank the military for that. Still, I don’t know where I want to go next or if I will decide to “plant roots” in Portland. Hiking for months is a good way to avoid that question and hopefully reset.

So why, why am I hiking the PCT?

Like most of us, or all of us millennials, my mental health isn’t great. When I am on the trail I am my happiest, most of my worries are gone – it’s just like being back on that mountain in Afghanistan.