What a week! Each day seems like an eternity on the trail, packed with so many unusual experiences that it’s impossible to sum them all up.  But here are some of the high and low lights from our second week on the trail: 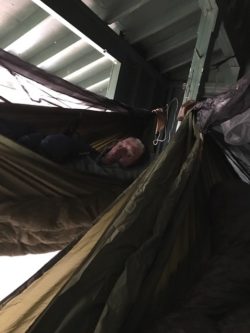 Day One – Pee-wee Herman: We took off from our rest stop in Carlisle with some trepidation since the forecast called for freezing temperatures and heavy winds that night.  After an “easy” 6-mile hike to the Darlington shelter (“easy” is relative when you’re carting a fully-loaded pack uphill) we decided to commit a trail “sin” by setting up our hammocks inside the shelter in an attempt to stay warm.  (Normally tents and hammocks aren’t allowed in shelters, but it’s early in the season and we didn’t expect it to be full.) We were joined by another hiker, an amiable scout leader out for a section hike, and later by Dylan Tonkin, a former thru-hiker who gave us some sage advice before retiring to his tent.  I layered on all my clothes, then spent a mostly-sleepless night shivering and listening to the wind roaring and howling outside. 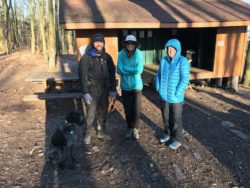 Luckily, I managed to succumb to a brief moment of unconsciousness right when the scout leader decided to warm himself up by less-than-savory means.  (Unfortunately, John was awake.)  The scout leader left the shelter early, thank god, but I think John was permanently scarred. 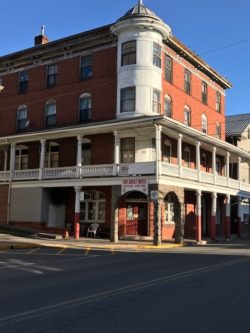 Day Two – The Doyle and Screaming Lights: Pennsylvania is famous for its rocks, and we had our first real taste of them during our 11.3 mile trek into Duncannon.  We had planned to go 16 miles, but all agreed that our knees and feet couldn’t take any more abuse so we stopped in Duncannon and searched for a place to stay. First we tried The Doyle, a dilapidated hotel-turned-hiker-hostel that has seen much better days (to put it nicely).  We had a hamburger in the bar, then decided to try our luck at the Stardust Motel instead.  We bummed a ride to the motel from Mary, one of the most famous “trail angels” on the AT (“trail angels” are people who generously donate their time helping hikers). The Stardust Motel was definitely on the sketchy side and featured a bathroom light that let out piercing shrieks when we turned it on.  Still, it didn’t seem too bad — until the people in the room next door started fighting in the middle of the night.  After listening to that for a couple of hours we decided we would have been better off in the woods. 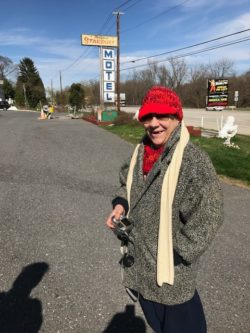 Day Three: We celebrated our departure from Duncannon by stocking up on stale raisins and beef jerky at a convenience store (expiration date 2014), then embarked on an arduous climb up a very steep hill above the town.  We were greeted at the top by a treacherous, boulder-strewn ridge. We managed to get through that, then experienced some badly-needed trail magic in the form of wonderfully cold water given to us by a day hiker in a parking lot.  Water has never tasted as good!  After that, we made it to the Peters Mountain shelter, where I managed to sleep through another noteworthy event: a nocturnal visit by some curious raccoons. Fortunately, they just sniffed around and left us alone. 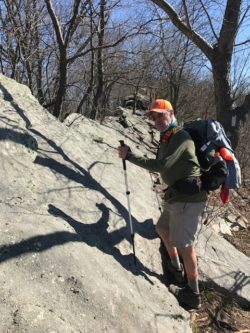 Day Four – 100 miles: We hit a couple of milestones this day — we made it one hundred miles past the Mason-Dixon line, and hiked our first 18-mile day. I have to say that our hiking partner, Linda Vance, is a total badass. We were all suffering by the end of 18 miles (to be honest, we were barely upright), but she hiked the entire distance on a swollen knee and never complained. I’m sure I wouldn’t have been half as stoic! 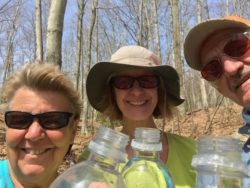 Our reward for completing that grueling march was Rausch Gap, a great little shelter in a gorgeous location. 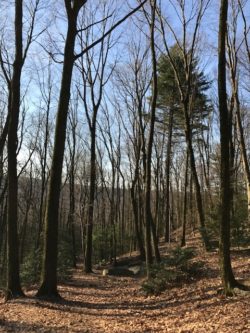 John and I set up our hammocks in an idyllic spot overlooking the mountains and spent a blissfully quiet night inhaling the glorious scent of hemlock trees — after the machine gun fire stopped.  (It turns out that the shelter is near the Fort Indian Town base and they were doing live-fire exercises that week). Despite sounding like a war zone, it was the best place we’ve camped yet. 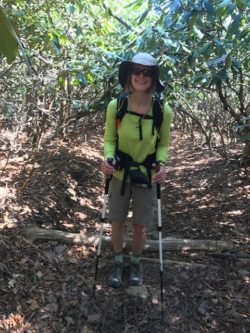 Day Five: The next day we departed the shelter to the sound of cannons and walked through Swatara State Park. The morning was fairly easy — a good thing given our mileage the previous day. But after strolling through rhododendron tunnels and admiring wildflowers, we began another serious climb over rocks. A southbound hiker told us he had “nothing good” to say about the section ahead, and he was right.  Suffice it to say that we gritted our teeth and endured it.  After nearly running out of water, and then seeing the sign at the William Penn shelter that said the ground around it was contaminated by human waste, we decided to go for broke and hike the final two miles into the town of Pine Grove to spend the night — a decision we didn’t regret, even though it meant a 15-mile day. 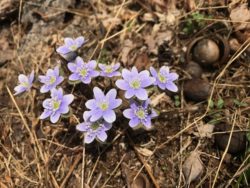 So after two days in town we have stocked up on food, done our laundry, eaten several good meals, and can almost walk without the infamous “hiker hobble.”  We are now ready to get back into the woods and face the the next section of the trail — the part where the “real” rocks supposedly begin.  Stay tuned… 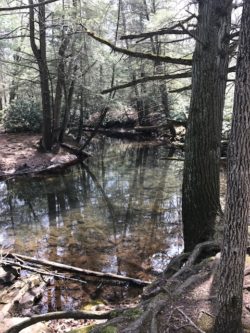