Running Across the Tracks

I packed up early on the morning of day 31 to continue my train track trek along the valley and make it to the other end of Nimpkish Lake. The grade ran along the eastern side of the valley so luckily I was in the shade until almost noon before I had to face the blazing sun. It was another 30+C day. 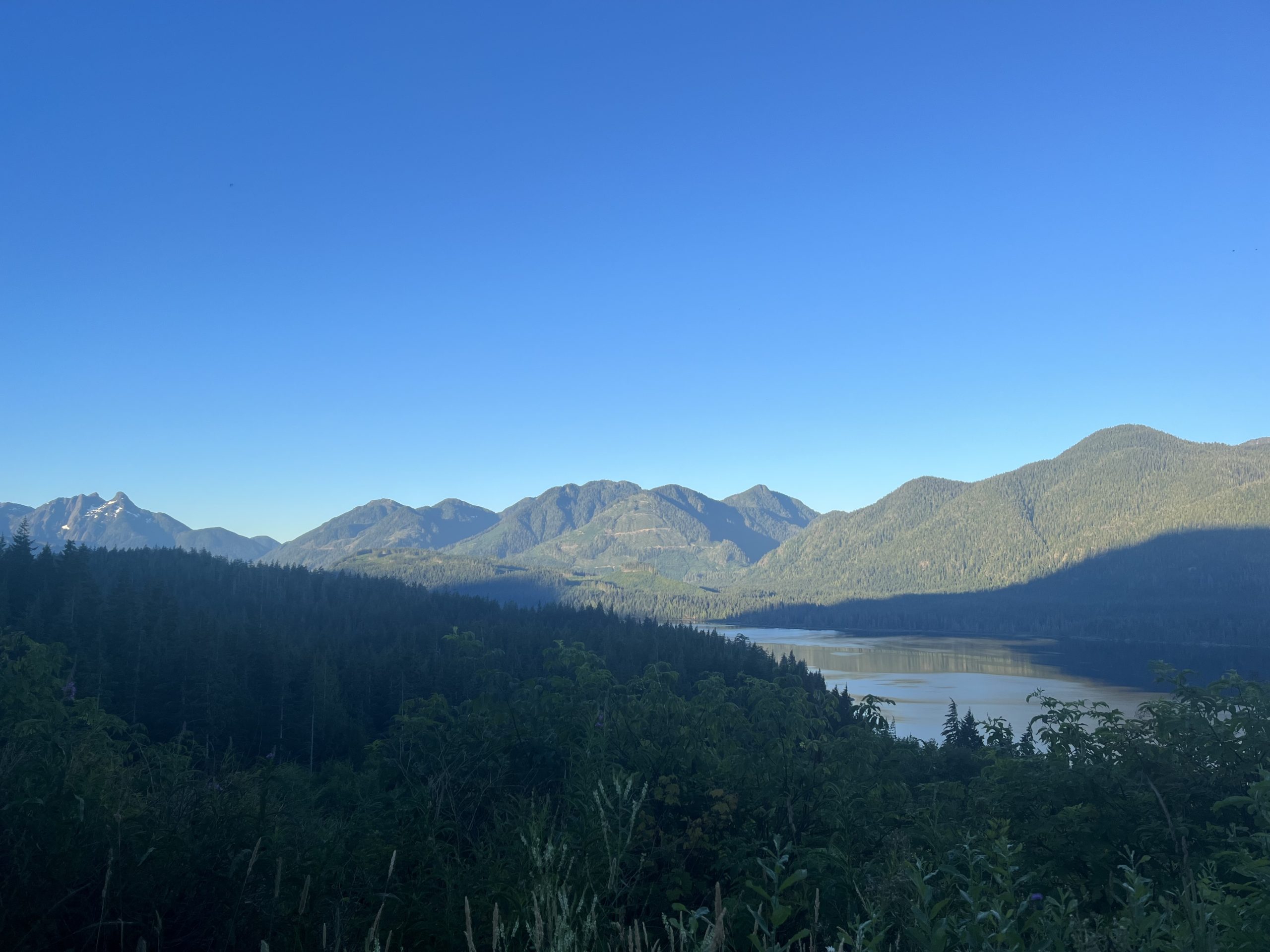 I’m on the shady side, yay

Along the railway grade, which sat just above the highway on the mountains rising up from the lake, I found some interesting artifacts. Old rusty nails, rings, strips of metal and clover-shaped parts littered the trail, left behind from the deconstruction of the tracks. Wooden ties lay in piles along the sides of the grade, emitting a pleasant dry woody smell. 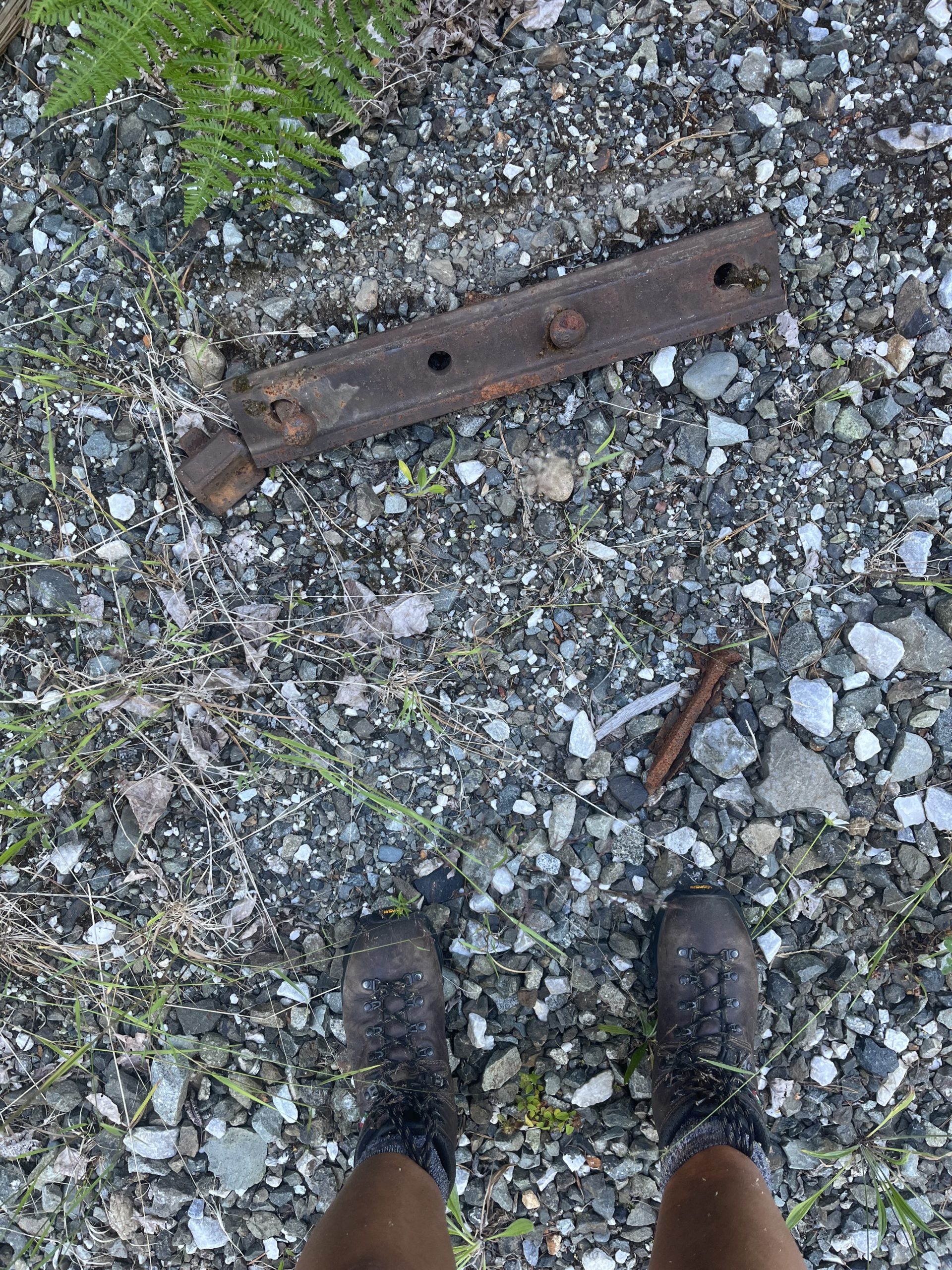 I also came across what seemed to be an abandoned rail car. At first I thought it was a bus, but then I realized it didn’t seem to be designed to run on wheels. 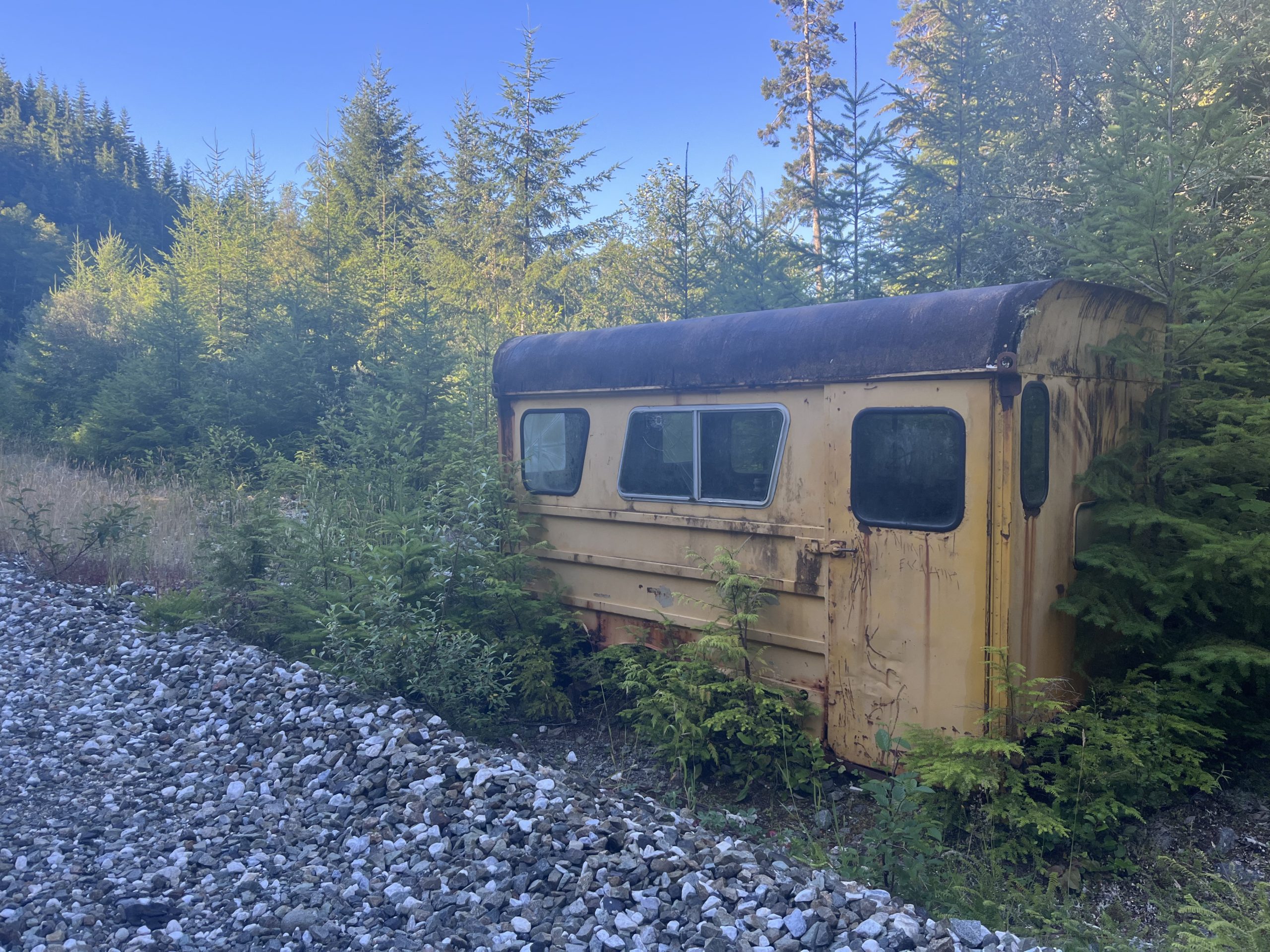 I was relieved to feel the heaviness of the day before lift a little, and I was able to be more at peace with the inevitable and numerous uncertainties that the day (and the future in general) presented. Though I had ample time to worry about the state of the green dotted trail turning west that marked the transition off of the grade as it veered to the east (on my map, green is single-track and yellow indicates the easier walking of roads, two-track and railway), I somehow was able to distance myself from the usual whirlwind of worry in my mind. It felt good to open up some space between me and the intensity of all the emotions spinning around in chaos. Finding the calm within the storm was unexpected, given the doom of the day before. But, finding myself in that calm, I tried to do what I could to keep myself there. Occupying my mind with positive mantras that kept time with the rhythm of my footsteps, trying to hang on to this break in the clouds and widen it, bit by bit.

I didn’t have a campsite planned for that day, but when I rounded the corner to cross the long bridge over the Nimpkish River at the north end of the lake, my decision was made. On the other side of the bridge was a nice sandy stretch of beach that looked irresistible, given the heat of the day and the blue expanse of the lake beckoning at its edge. 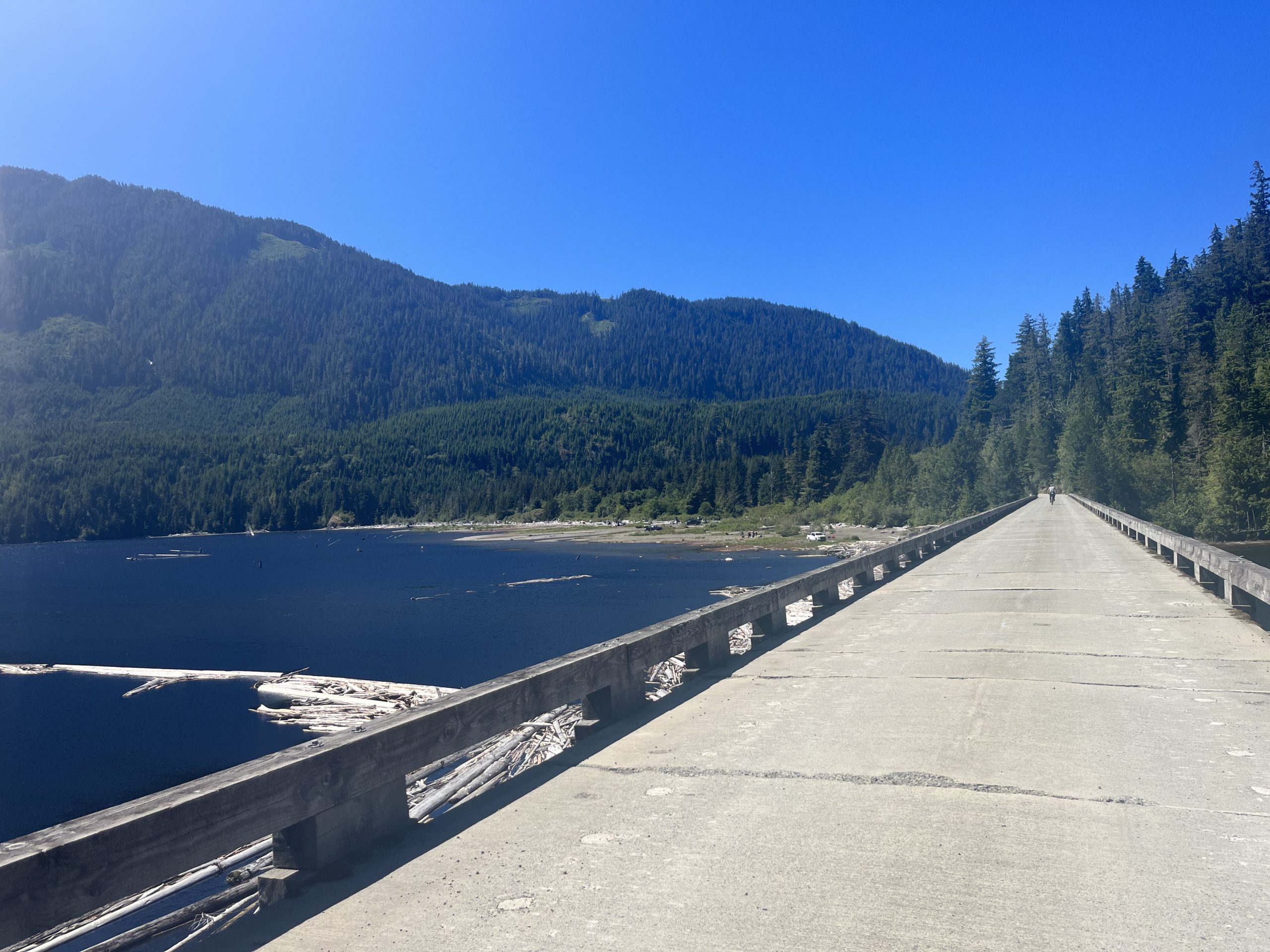 I joined the handful of campers and day trippers among the driftwood and settled in to a relaxing afternoon under the shade of a upturned stump, watching the sun slowly migrate across the sky, and feeling the warm afternoon winds puff by. Of course, I went for a dip in the clear refreshing water, letting the sun dry me off. 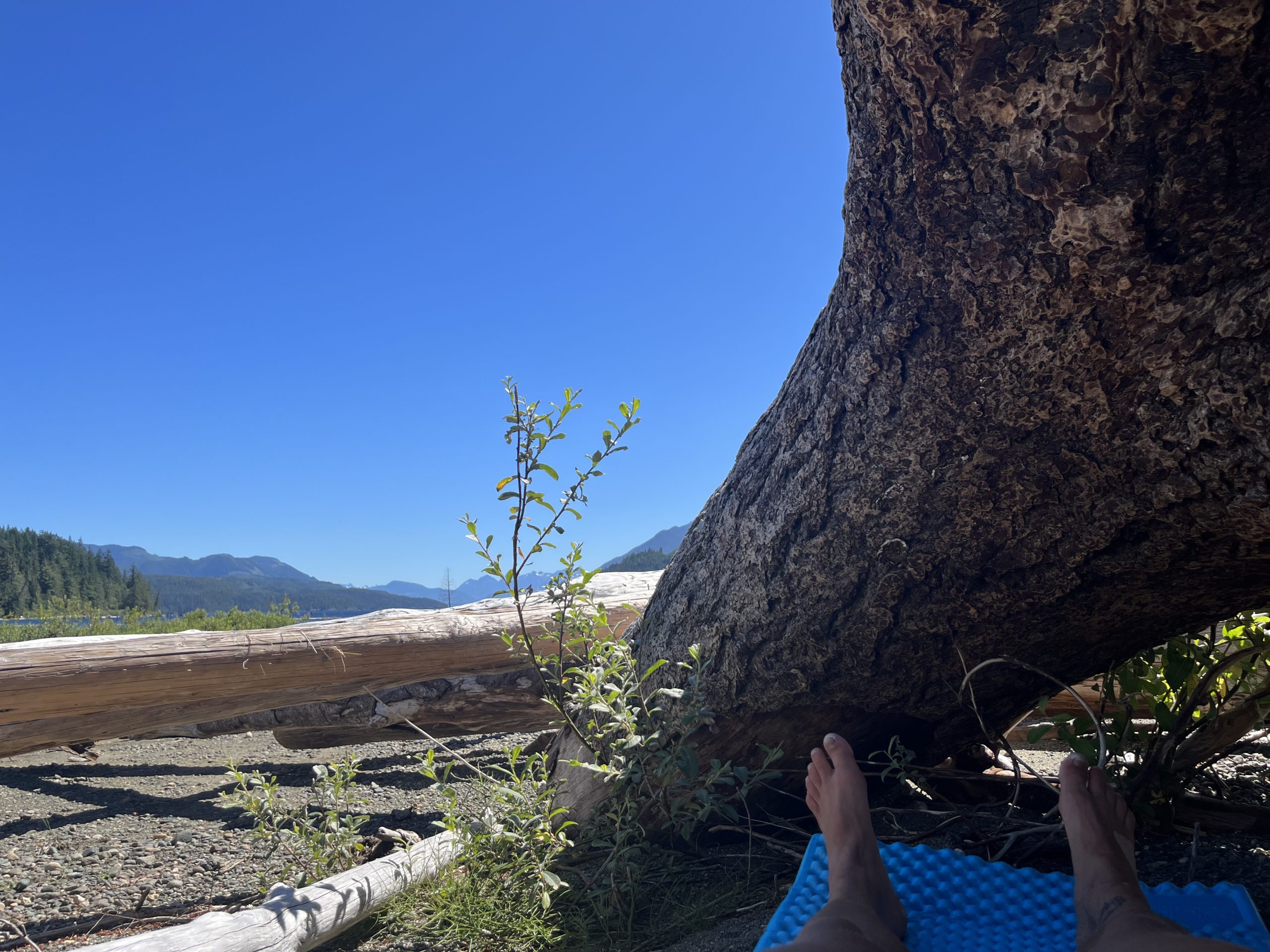 I watched an eagle and a seagull wheel around in the sky. The seagull reminded me that I was close to emerging on the coast. The last time I saw the ocean was in the Alberni Inlet back down in the southwest. Now I was farther north, about to meet the waters of the Queen Charlotte Strait before heading northwest along the North Coast trail to greet the open Pacific Ocean at Cape Scott. The upcoming change in geography and the prospect of encountering marine life such as grey and humpback whales, orcas, otters, and sea lions excited me.

I awoke to a foggy morning on day 32. As I began making my way into the forest on the short hike into Port McNeil, the fog hit the trees and fell to the ground. Even when it’s not raining from the sky, it can still rain from the trees. I guess it makes sense that they called this the rainforest. 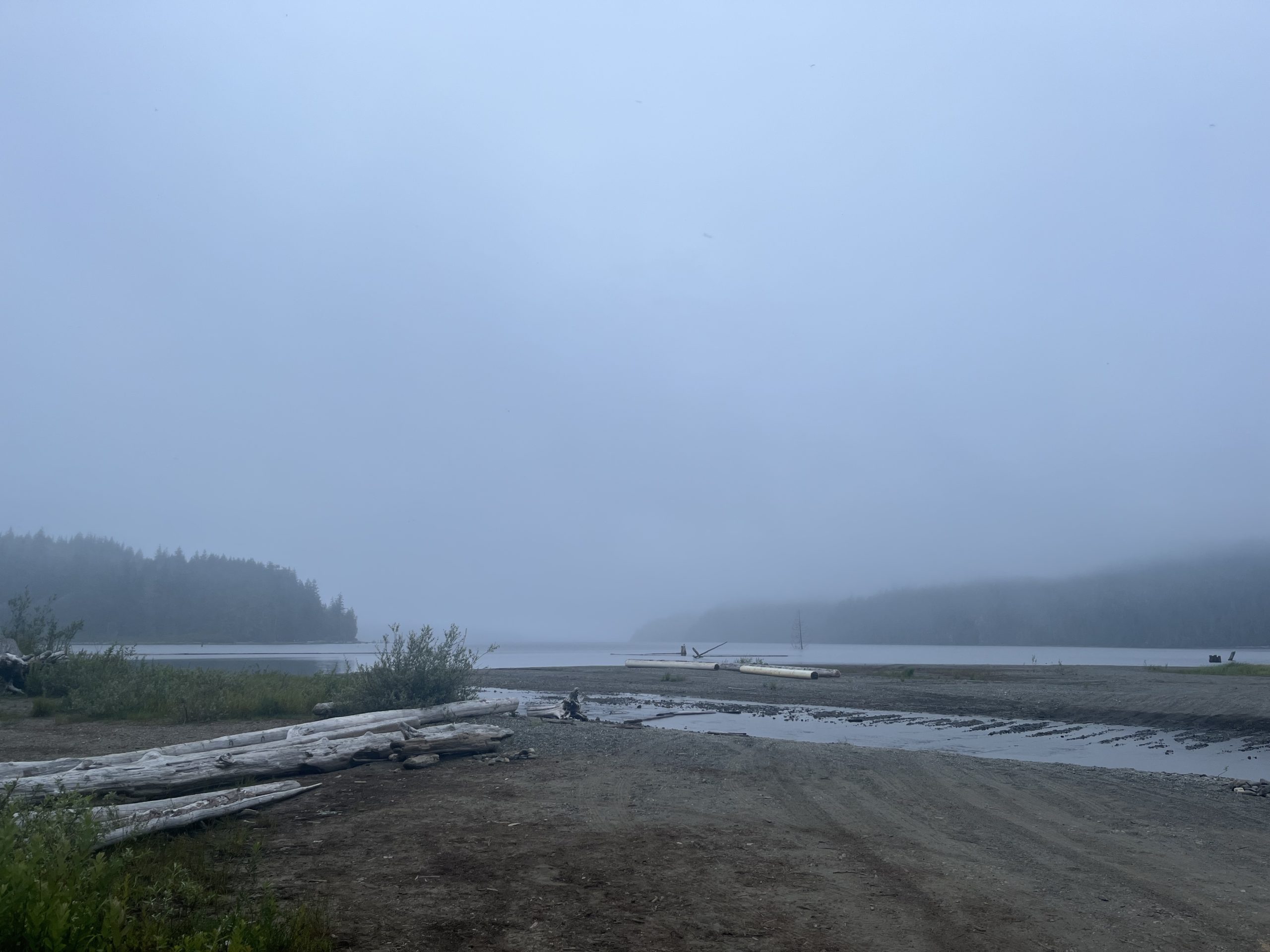 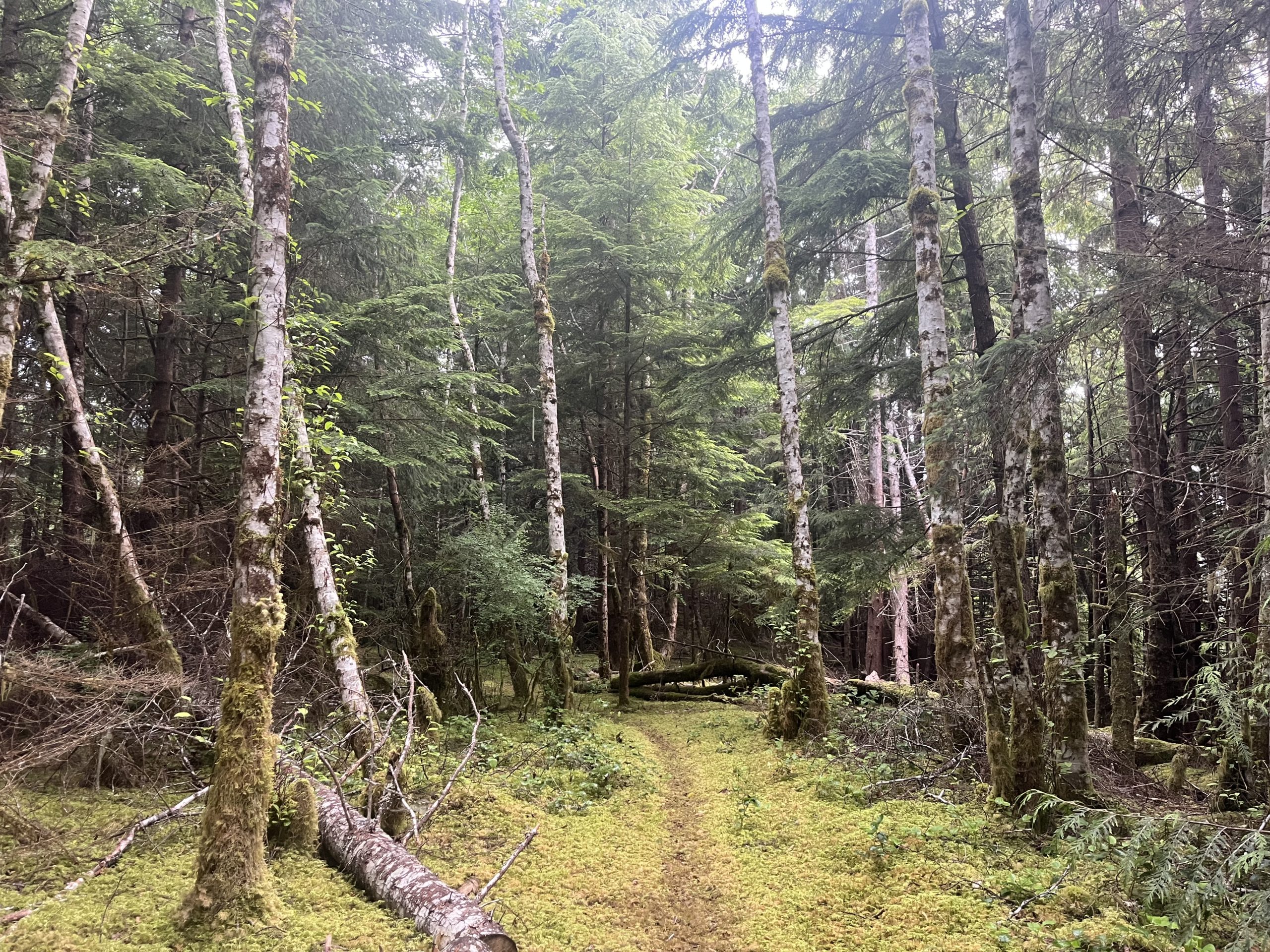 After taking care of some errands in town (food, charging the electronics, internet tasks, etc), I enjoyed some ice cream by the harbour. The cool breeze coming off the ocean actually prompted me to don a sweater. 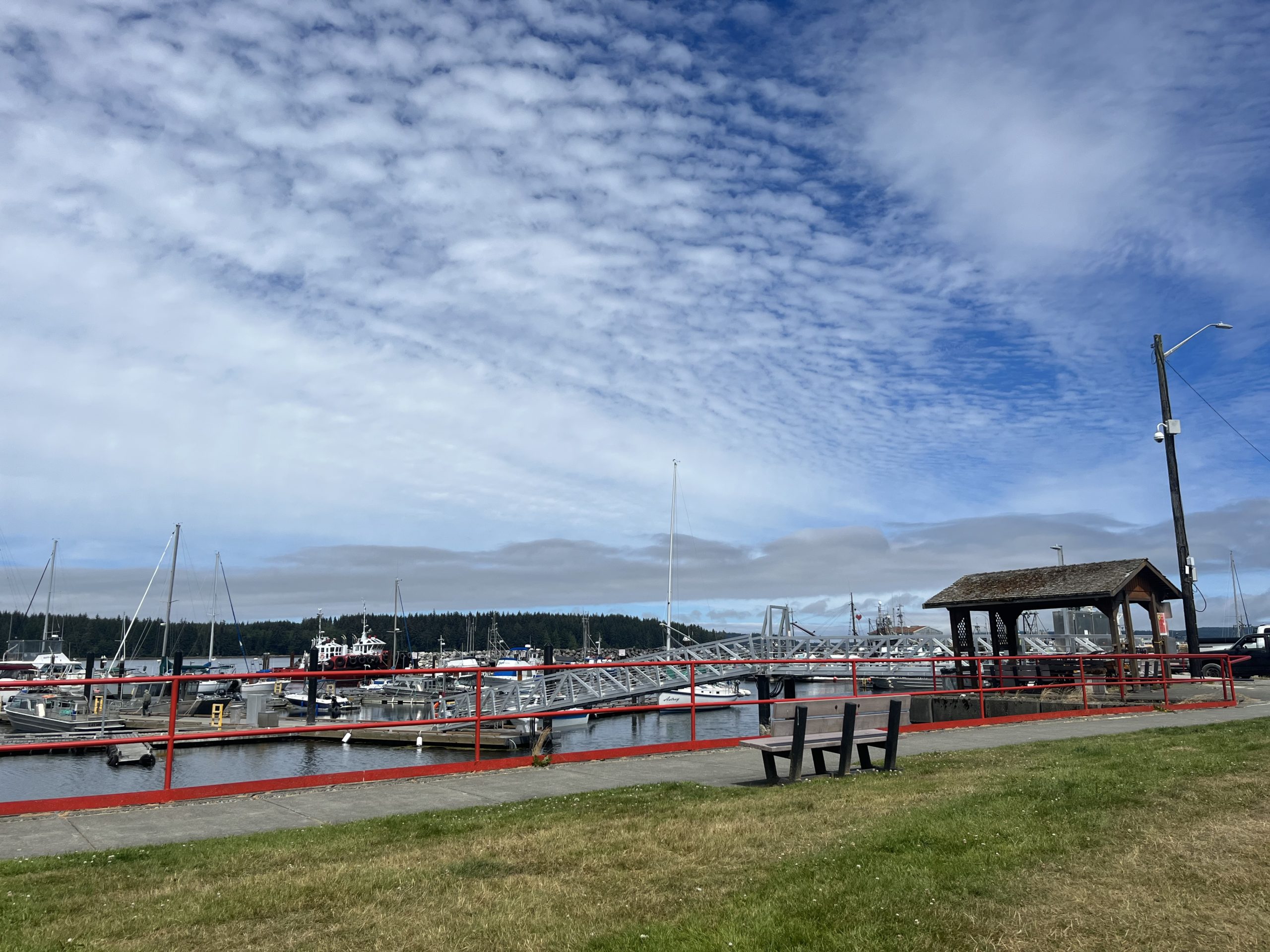 The port of Port McNeil

I also ogled at the World’s Largest Burl, a huge abnormally shaped growth harvested from a spruce tree in the forests northwest of town in the 70s. (The World’s Second Largest Burl is showcased on the highway a few kilometres away). 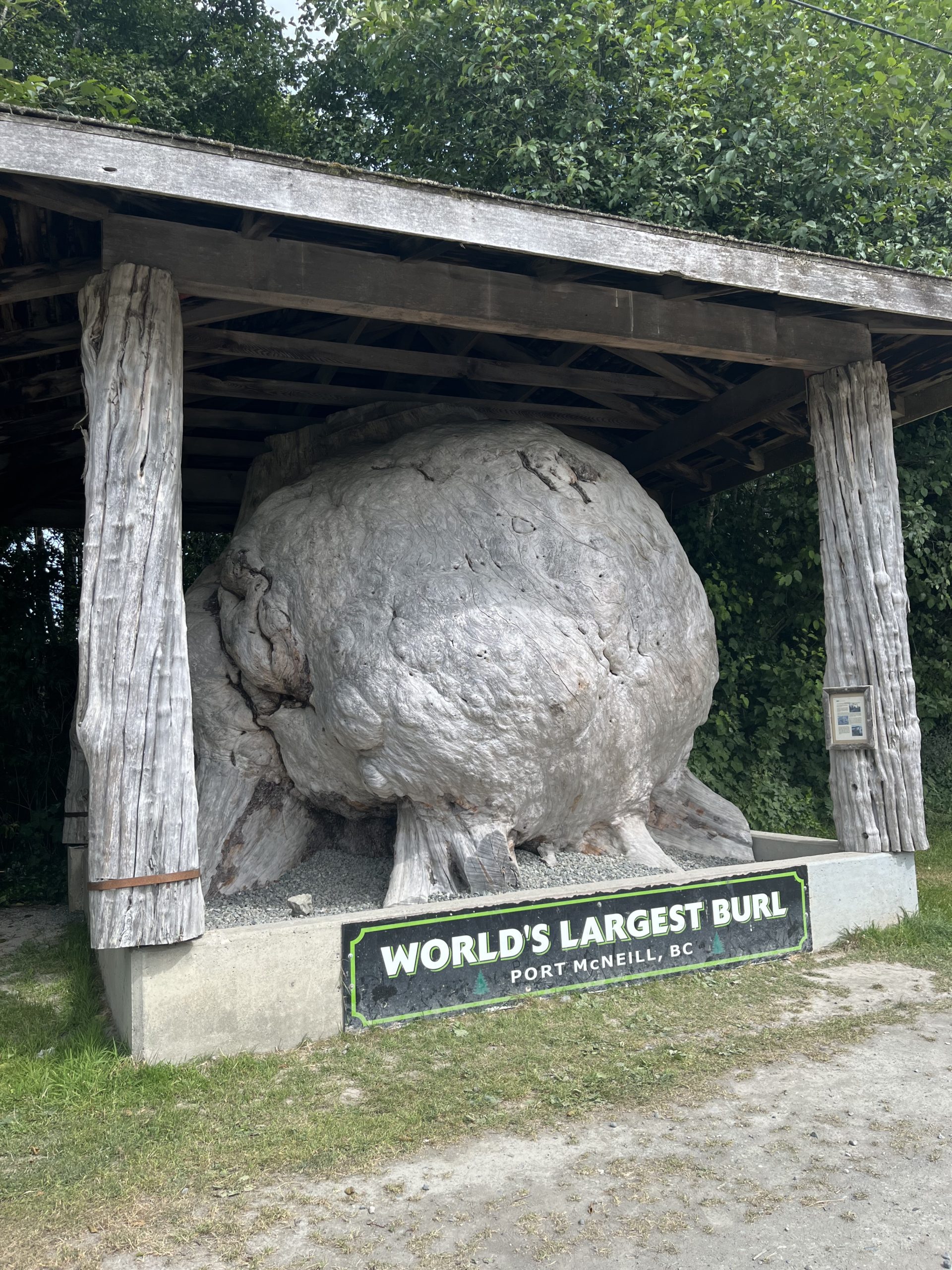 After that, I headed to Cluxewe Resort on the mouth of the Cluxewe river just outside of town, where I had booked two nights’ camping. I was now entering into the traditional territory of the Kwakiutl First Nation. ‘Cluxewe’ means ‘place of the changing river mouth’, or ‘place of refuge’ in the Kwakwaka’wakw language. 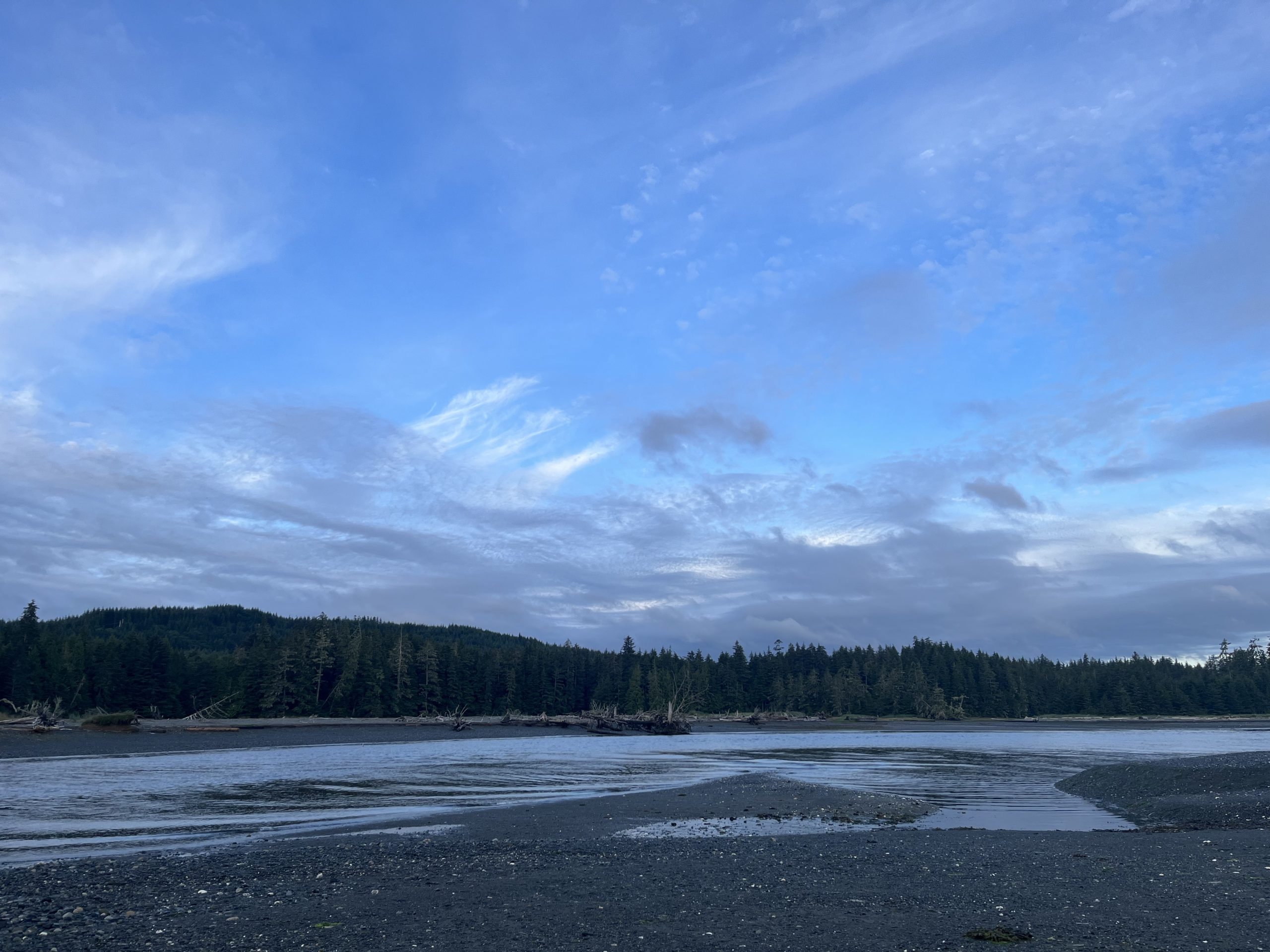 The mouth of the river at low tide

My tent site was located on the tip of a thin stretch of land with the ocean and a rocky beach on one side, and a wide grassy estuary on the other. It was beautiful. 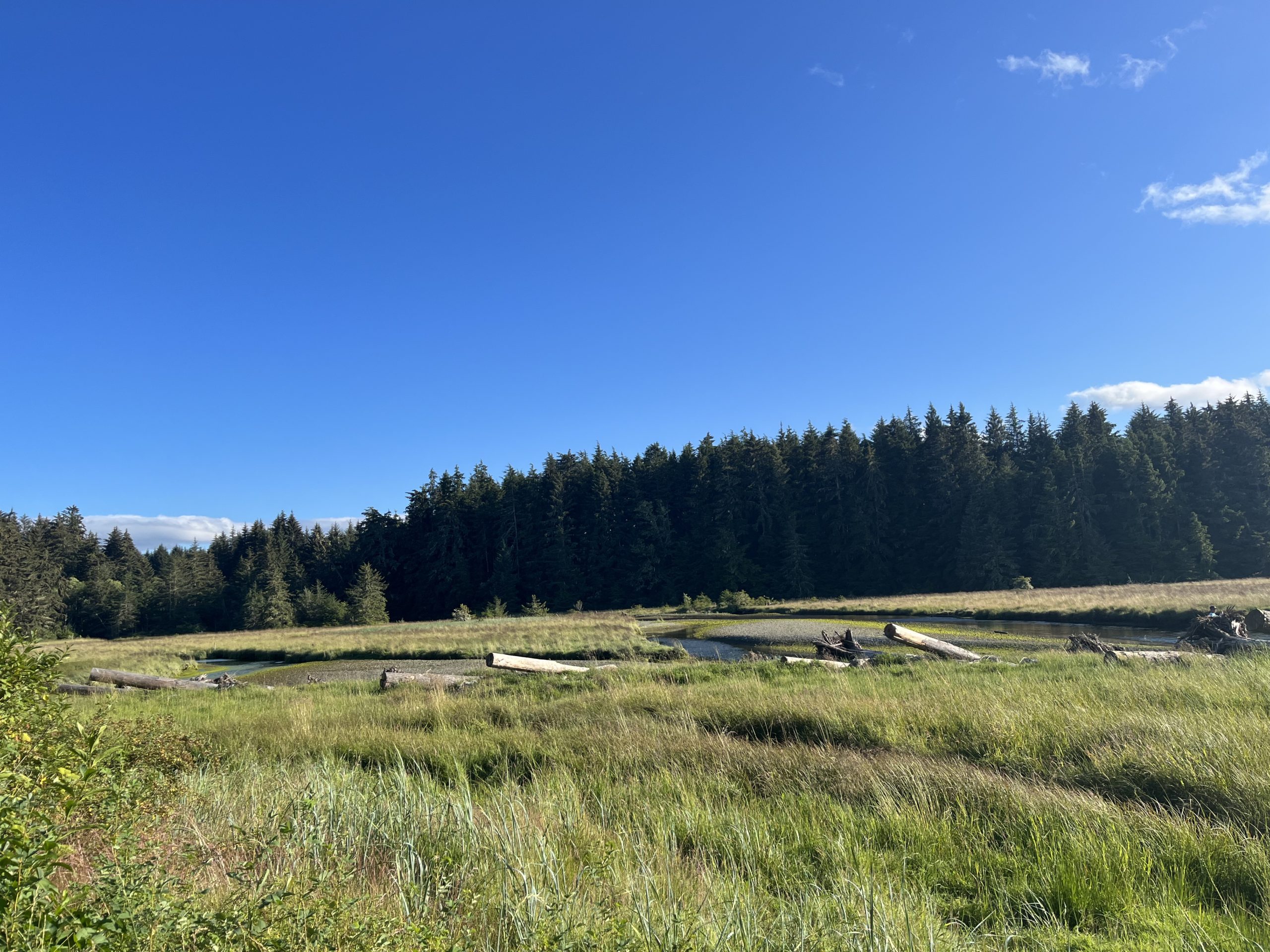 I was surprised to find quite a lot of people with their fishing rods casting just off shore. And then I noticed the fish, jumping out of the water everywhere, even only a few meters off shore! I asked a man set up near where I was watching what all the commotion was about, and he explained that they were going for the pink salmon (and possibly coho) that were amassing to head up the river when conditions turned favourable. We went on to have a really interesting conversation in which he recounted some stories from his time as a commercial fisherman working these same coastal waters. It sounded highly dangerous. 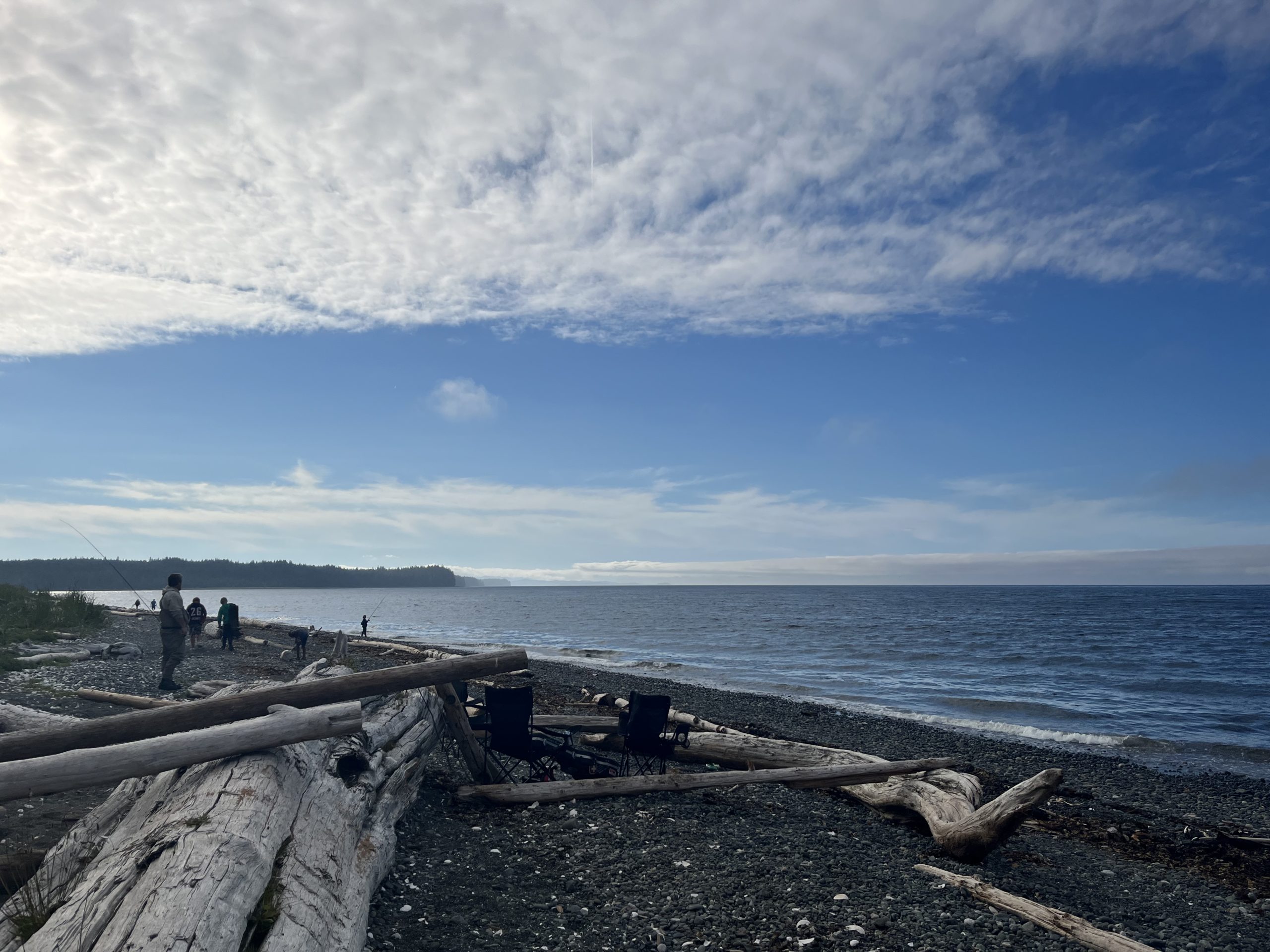 Fishing on the beach

It turned out we were campsite neighbours, and the fishing guy, Bill, invited me over to have fresh caught salmon for dinner with his family. I felt so blessed. The food was so fresh and the company was so pleasant. Way better than the sad trail mix munching alone in my tent I was going to indulge in instead. And the fact that I saw all the fish jumping in the water, my food source, that close up, made it that much cooler.

Another zero so soon? After 4 days of hiking, I took a day off at Cluxewe. I pretty much slept the day away, with the sounds of crashing waves weaving in and out of my consciousness. The cool breeze made it the perfect temperature for napping, both inside my tent and on some driftwood on the beach. I was wiped. I hoped the day of rest was enough to recharge for the long walk to Port Hardy coming up the next day. It was a beautiful spot to hang out though, and I enjoyed watching the sunset amidst the smell of campfires, with the white caps of the waves streaking across the deep blue of the water.