Pooping in the Woods: A Different Point of View

I have fairly extensive experience at pooping in the woods.  To be clear, my house has functioning toilets and I use them, but after over 10,000 miles of backpacking I know that on most trails you have to defecate outdoors, digging a hole to do so.

Almost any topic in the world of backpacking can give rise to controversy and disagreement, but a few hot topics are perennially debated.  Some aspects of pooping in the outdoors are “hot topics”, and of course I have my own biased views.   I think the best approach to these topics is to read or listen to different points of view and then form your own conclusions, and that’s why I’m sticking my neck and my views out here — sometimes a particular way of looking at a familiar topic can resonate, can “just make sense”, perhaps even introduce you to a new idea to consider.

And it’s an important topic.  Honest, I don’t tackle this out of a grade-school attempt at humor or because I’m all that fond of the topic.  Not knowing how to do a good job of defecating in the forest is one of those few things that can make people dislike backpacking, can driving them away from a wonderful, healthy, and enriching activity.   So I think it’s worth a little discussion.    Note that I’m not trying for a complete treatise on the topic, i.e., dig a hole in this environment, use the “smear” approach on rocks in other conditions, proper sanitation, etc etc.   If you’re approaching the topic with literally zero background, you can do an internet search and get a lot of details and ideas.  What I’m doing instead is to offer a slightly different take, and an emphasis on a few things that I consider to be ‘key’.

So first, let’s talk about, as the wicked witch said to Dorothy, “How to do it”.   As the witch also said, “These things must be done dellll-icately”.    The big piece of wisdom I have to share is “learn to squat”.

In many parts of the world, western toilets aren’t a given, and everyone learns to squat at an early age.  If I can bring gender into this discussion, women in our culture more often learn to do this, even for just day hiking or any “away from an actual toilet” situation.   But in the U.S., men often don’t.  We don’t need to.

Hence I sometimes see articles written with elaborate diagrams of how to hold on to or lean against rocks, trees, stumps, even incautiously immobile wild animals (seriously, that moose was just not going anywhere, and there wasn’t a tree in sight …).   I call these diagrams “the kama sutra of excretion”, and I suggest that you forget ‘em.  Just learn to squat.  Why?

First, it’s going to be easier to dig your hole.  And as I’ll touch on later, digging a good, deep hole is an obligation that you have, as well as to make sure that you think about where and how much water flows in springtime in the vicinity, and just generally about being a good LNT (“Leave No Trace”) steward.   If you’re fixed on finding that “just right” spot to dig a hole, your options for where to dig it are very limited.  If you’re comfortable doing an unsupported squat, you can dig the hole where the hole is easiest to dig.  And from having dug a lot of them, let me say that all too often you’ll run into a mass of roots and/or rocks that can make digging very difficult.  Hence it’s really excellent to have flexibility in picking your spot.

Consider also that if you’re camped at a commonly used campsite, you can be sure that many people have dug holes in the vicinity before you.  This really is not pirate treasure that you want to unearth.  And we humans are pattern-matching creatures; that spot that looks just perfect to you is all too likely to have looked perfect to others before you.  I will say that I have never dug down to inadvertently uncover someone else’s waste, but then … I squat.

Finally, sometimes the body isn’t entirely predictable in these matters.  It can happen that one moment you have no idea that you have to go, and then a moment later you realize “I’m going to have to dig a hole very soon!”   In these situations, you can’t be too picky about where you dig, and so — being able to squat is an important skill.       I’m not joking when I say that for me this is an essential and basic backcountry skill.

If you don’t know how to squat, it can be a tricky topic to search for on the internet.  I suggest this text: “How to use a squat toilet”.

Let me raise for a second time that I think you have a real obligation to dig a GOOD hole, a reasonably deep hole.    How deep?  Unfortunately, if you look up what others say on this topic you get different answers.  Some say “6 – 8 inches” or “at least 6 inches”, others say “4 – 6 inches”, and some argue that bacteria required to break down your leavings don’t function below 6 inches.   I expect that the truth varies somewhat depending on the terrain in which you’re hiking.

But practically speaking, a 6 inch hole is HARD to dig.  It’s time consuming, and I often get my hands dirty and fresh dirt compacted under my fingernails from pulling out rocks and breaking smaller roots.   Once in a great while you’ll encounter lovely soft, sandy soil with no rocks and roots and your hole will almost dig itself. Enjoy that when you encounter it, but in the real world it’s almost always going to be somewhat of a fight to get to that depth.

I suggest that you mark whatever sort of trowel or digging implement you carry so you can easily tell where the 6 inch mark is.  In my case, I know that the distance from the end of my little finger to the base of my hand is about 6 inches, and that’s a measuring tool that I always have with me.

Dig Your Hole Ahead of Time

Now let me tell you a secret that will help you to dig a better hole AND to limit the discomfort of bad weather or insects chomping on all of that exposed skin while you do your number two: dig your hole the night before.

This, my friends, is real trail wisdom, but it only works if your body is on a somewhat regular “in the morning” schedule.   By digging your hole in the afternoon/evening, you can take your time to pick out a good spot and to dig a really decent hole.  If you wait until you “have to go”, you’ll sometimes find that you’re in too much of a rush to dig as deep as you should.  As an aside, if that should happen to you an option is to just do your business, then dig a nearby hole and use sticks or whatever to transfer “your load” into the hole.   But it’s much nicer to dig the night before.  It’s also nice if you want to get an early start in the morning, and for me the early morning is typically the best part of the day to hike in.

Digging the night before is really wonderful when the bugs are fierce.  It just gives them a lot less time to zero in on you and call a thousand of their friends.  You stride quickly to where your hole is pre-dug, “drop trou” to quickly and efficiently evacuate, and by the time the bugs show up in force you can be wrapping up operations.   It’s also very nice in a cold rain or just anytime that conditions are unpleasant.

At the risk of this article running too long, I want to touch on just one more issue, and certainly the most contentious and controversial one: toilet paper.   Some people wipe up with smooth rocks, certain kinds of leaves, pine cones, snow, etc, and they feel that it’s just better to make do with natural materials.  These people have my respect.  I’ve used natural materials a time or two, but I prefer toilet paper, and I think that most people do.

There’s been a sort of movement to “pack it out”, meaning that you bag up your used toilet paper and carry it home with you, disposing of it in the garbage.   Poop-covered toilet paper is not something that most people like to carry, but one can learn to adequately package it so that it’s not a risk.

The real problem with this is, I think, that most people just won’t do it.  I suspect that it’s a campaign that’s doomed to fail.   Let’s instead take a moment to contemplate what it is we’re trying to accomplish. 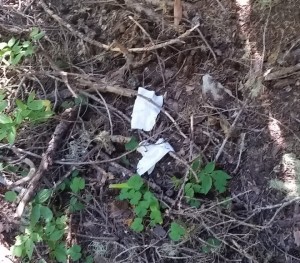 Toilet Paper left on the ground

If you’ve backpacked or even dayhiked a lot, you’ve no doubt come to places along the trail and likely found campsites where toilet paper is just strewn about on the ground.  It’s a terrible thing to see, and from such sights some folks have concluded that animals dig up the poop holes.

Perhaps that actually does happen, but I’ve never, ever seen evidence of it.  When I see toilet paper on the ground, it’s almost always in limited quantities, never shows any sign of excrement, and I never see signs of a dug-up hole.    At the risk of raising the ire of all of the female backpackers, my unscientific guess is that this isn’t from “#2”, but more often from women who use toilet paper when going “#1”.   I’m not saying that accounts for all toilet paper left on the surface of the ground, but if there were a way to verify this I’d be willing to bet a modest sum.

So if toilet paper on the surface has little to do with defecation, why should I carry my excrement-stained and thus very smelly toilet paper out with me?   My feeling is that IF the hole is dug to a decent depth, then — at least in the type of forest that I tend to hike in — it’s just fine if I push the used toilet paper deep down into the hole with a stick (breaking off the stick to leave the nasty end in the hole).

I’m sorry to be so graphic, but this is an important topic.   And I think that the idealistic “perfect” approach of “pack it out” is likely to just get in the way of educating people on a more pragmatic approach that more of us might actually follow.

So, to summarize my suggestions: Learn to squat to go “#2”.   If you use toilet paper to go “#1”, please do pack that out (or bury it well).  Consider digging your hole the night before if you’re on a morning schedule for #2.   In any event dig a GOOD hole.  Each and every time.