Evan Hansen will carry his canoe 300 miles across Minnesota to raise money and awareness for suicide prevention. Click here to donate to Portage for a Purpose.

When Evan “Sweet” Hansen thru-hiked the Appalachian Trail in 2018, he sometimes felt conflicted about devoting precious time and energy to that endeavor when he could have been using it to help others. This September, he’ll be taking on a different type of challenge: portaging a canoe over 300 miles across Minnesota to raise money and awareness for suicide prevention.

“We’ll see how far I can make my legs take me with this thru-hike… On paper, it doesn’t seem too bad compared to what I’ve done and what other hikers have done before,” Hansen told The Trek on Sunday.

He’s currently putting the finishing touches on his plans and gear. He begins his monthlong hike on September 1st. 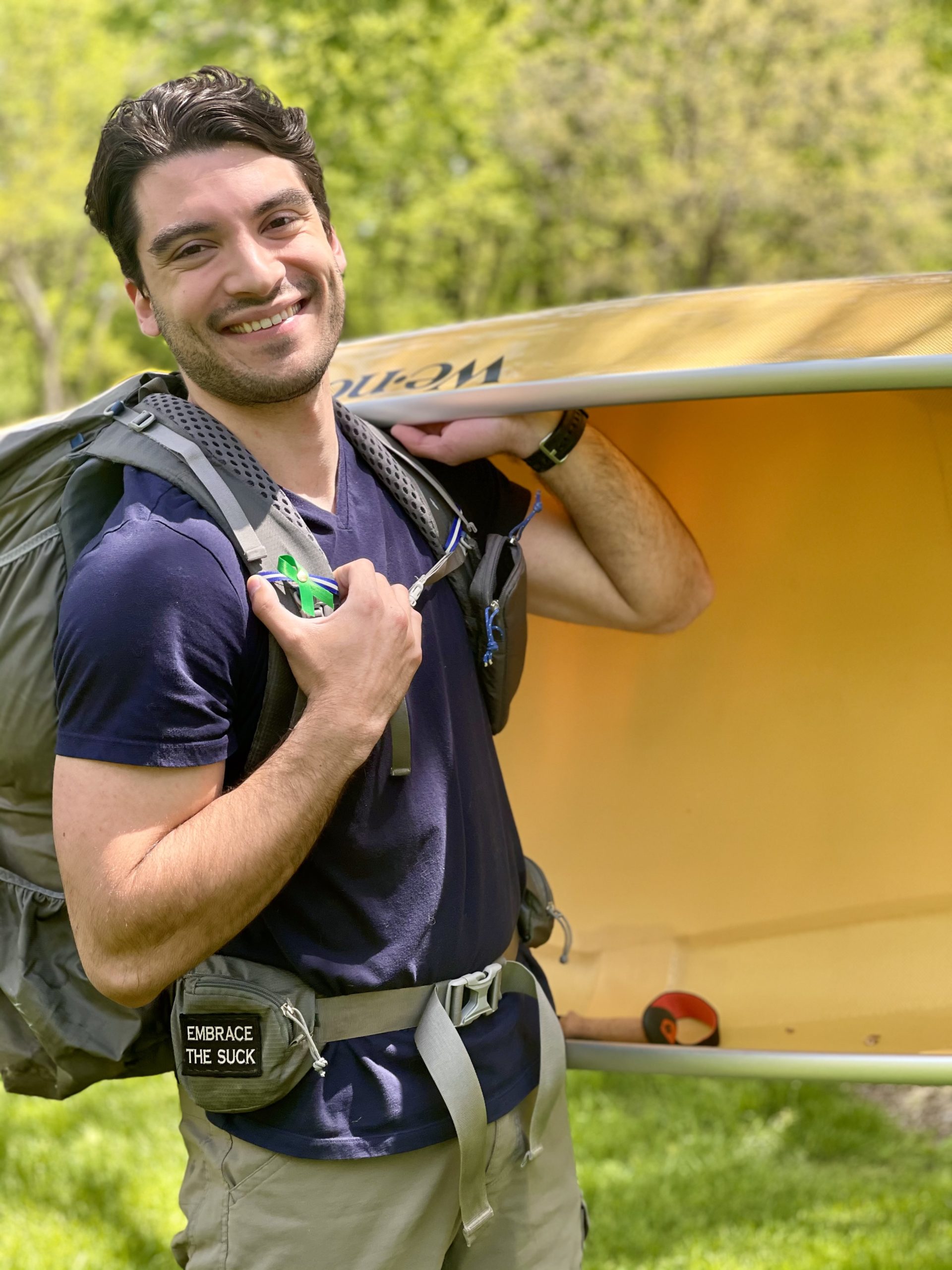 Hansen originally planned to thru-hike the Superior Hiking Trail (SHT), a 310-mile footpath across Minnesota from the Canadian border to Wisconsin. But severe drought and wildfires forced a ban on backcountry camping on the SHT.  So he pivoted.

“I had several backup plans, but the fires got so bad I think I’m on Plan F now.” But he says the last-minute itinerary change may be a blessing in disguise. Instead of hitting the SHT, Hansen will now be walking across southern Minnesota from roughly Sioux Falls to Winona, ending on a bridge across the Mississippi River at the Wisconsin state border.

The new route will almost exclusively follow roads. Not only will this make for easier walking, but it will put Hansen in contact with many more people than he’d have encountered on the SHT. The route also takes him directly through many of the southeast Minnesota communities he’s hoping to reach. “I think it’s actually going to be better for awareness than just being in the backcountry. It’s not going to be as photogenic, that’s for sure. But that’s not the reason why we’re doing this.”

Hansen has partnered with the Southeast Minnesota chapter of NAMI, the National Alliance on Mental Illness, for this hike. NAMI Portage for a Purpose will raise funds and awareness for NAMI Southeast Minnesota’s mental health services and suicide prevention awareness. 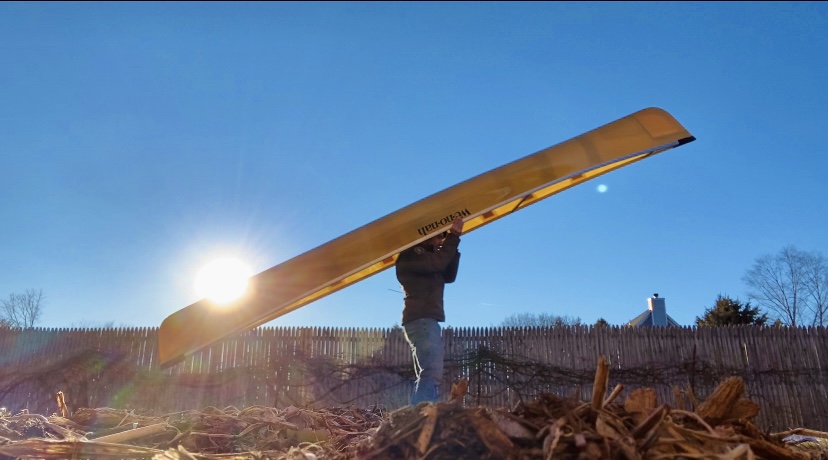 Hansen’s trek will be roughly 300 miles or about 100,000 rods. A rod is a unit of distance approximately equivalent to the length of a typical canoe, commonly used for measuring portage lengths. Portage for a Purpose aims to raise $100,000—one for every rod. Ideally, he hopes to hit the fundraising goal before he completes the hike at the end of September.

Hansen will be carrying a roughly 16-pound yellow canoe on his back throughout the trek. He hopes the spectacle will draw attention and generate conversations with passersby. “There’s really no good reason to portage a canoe along the Superior Hiking Trail or along southern Minnesota,” Hansen says with a laugh. “I’m doing something a little crazy to get some attention for a good cause.”

Donate to Portage for a Purpose

“I’m using the canoe because I feel that it represents the weight of mental illness that those who have completed suicide have carried, and also the weight of grief that their loved ones continue to bear.”

Hansen clarifies, however, that he’s not trying to take on the burden of those things himself. “That’s impossible for any one person to do. It’s more of an act of love and an act of empathy.”

The canoe also serves as a walking memorial to those lost to suicide. Hansen will write the names of individuals lost to suicide on the outside of the canoe. Anyone can add the name of a loved one to the canoe either in person or through his fundraiser’s online form. Hansen says Portage with a Purpose has already collected well over 100 names through signing events and online submissions.

Add a Loved One’s Name to the Canoe 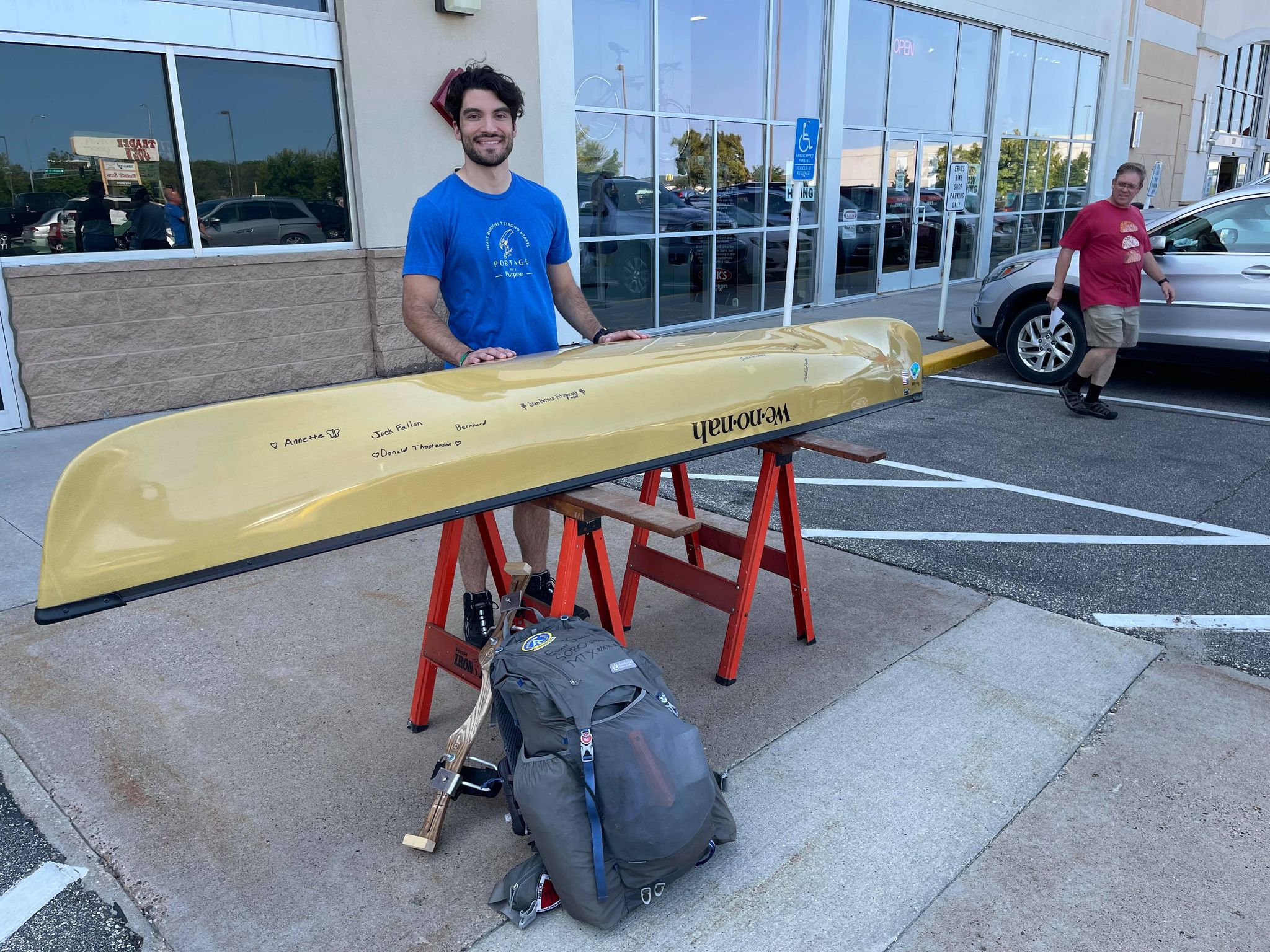 Hansen at a Portage for a Purpose canoe-signing event in Rochester, MN. Photo courtesy of Evan Hansen.

Among the names scrawled on the canoe are four people in Hansen’s world who died by suicide in 2019 and 2020. He’s used aliases—The Coworker, The Brother, The Angel, and The Hiker—to commemorate the four out of respect for their families’ privacy.

The Hiker, The Angel, The Brother, and The Coworker

They were a coworker, the brother of a good friend, a beloved community member, and a fellow AT hiker. All four losses left Hansen with a deep sense of sadness and depression, especially when he witnessed the ripple effect of suffering throughout their communities. In a series of posts on the Portage with a Purpose Facebook page, Hansen describes the feelings of shock, disbelief, grief, and powerlessness he felt with each death.

These four losses were Hansen’s primary motivation to take on the Portage with a Purpose. But he describes a fifth reason in another Facebook post. “A big reason why I am so steadfast in my endeavor is because I have been suicidal in my own thoughts and actions throughout my life… This journey is not only a way for me to show my love and support for those in the trenches of mental illness, but to practice what I’ve preached and stay strong in my own battles as well.”

Envisioning Portage with a Purpose

Hansen first envisioned the hike in 2019 and started planning in earnest in 2020. He reached out to the Superior Hiking Trail Association for permission and advice on portaging a canoe the entire length of the trail. Then he reached out to a connection at NAMI Southeast Minnesota to discuss a possible partnership. “I wasn’t just going to make a GoFundMe and just have people donate… I wanted it to go to an organization that I knew would do good.”

Hansen will, of course, be taking care of the actual hiking aspect of the fundraiser. He’ll also spearhead much of the content creation on the Portage with a Purpose Facebook page. NAMI Southeast Minnesota will also help with content creation and will manage the fundraising and donation aspect.

Hansen was already planning the trip for September when hiking conditions are ideal. Upon partnering with NAMI, he realized that September is also Suicide Prevention Awareness Month. “I said, ‘Oh, my gosh. That’s perfect.'”

Hansen has experience guiding trips in Minnesota’s Boundary Waters, frequently portaging canoes that weighed more than 80 pounds. The minimalist, 15-pound canoe he’ll be carrying next month feels feather-light in comparison. His experience thru-hiking the AT, plus a stint shaking down fellow hikers as an employee of Mountain Crossings Outfitter on the AT at Neel Gap, have prepared him well for the undertaking. 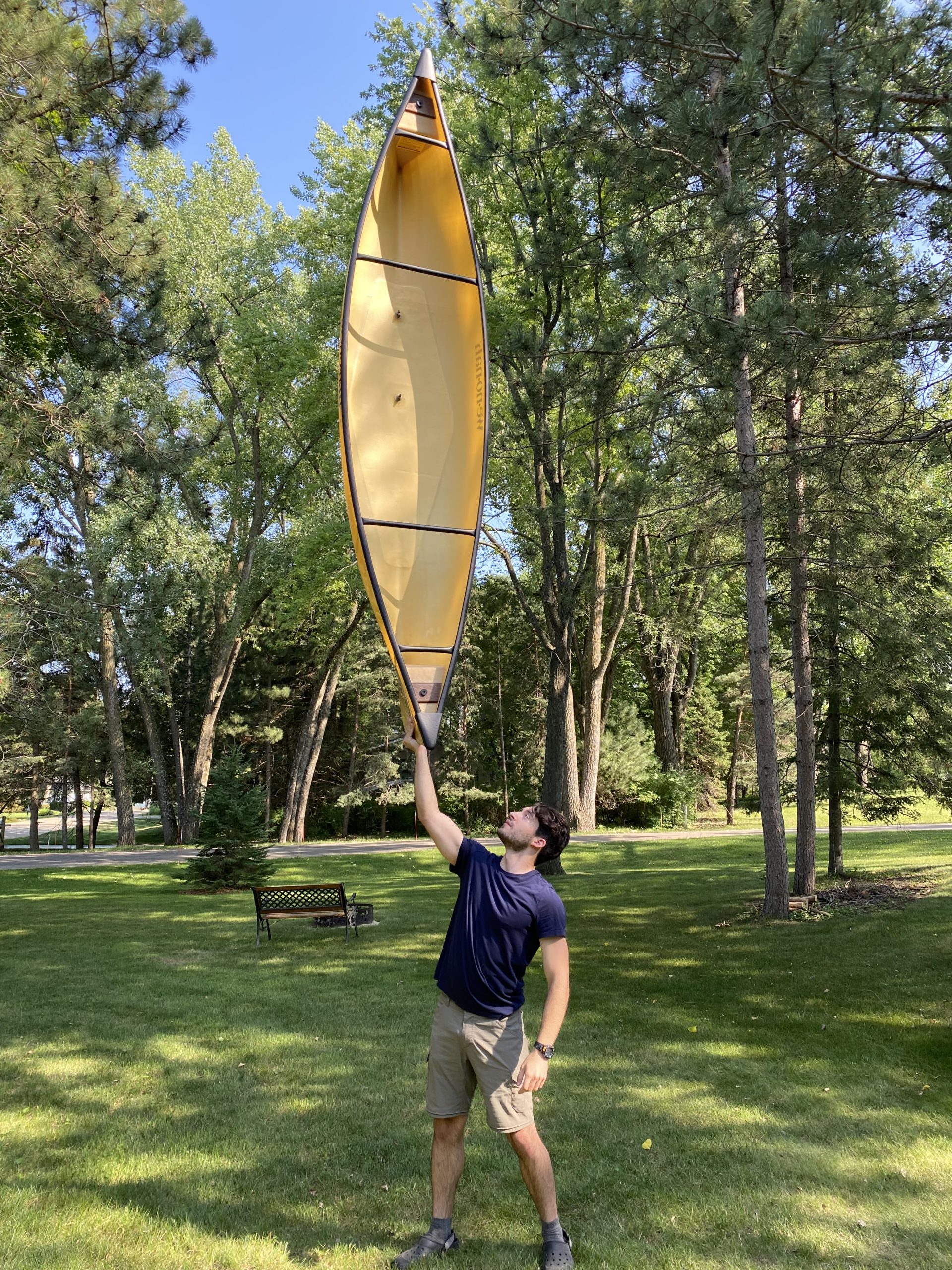 “I love shakedowns—that was my favorite part of Mountain Crossings… I’ve got some new gear. I’ve got some gear that was donated. I’ve got some old gear. It’s kind of a hodgepodge of different things, but… things are feeling ready.”

He’s managed to hone his base weight—canoe and all—to 40 pounds.

That’s heavy, but the relatively flat, open terrain of his planned route should compensate for the extra pounds. Even so, Hansen plans to take it slow—just 10 miles per day to start.

“It’s about the people.”

Although he’ll draw on his experience with the AT and Boundary Waters, the Portage for a Purpose will be a unique undertaking.

“I know this isn’t all-encompassing… but (on the AT) I came to the conclusion that when you turn towards the mountains, you turn your back on the ones you love. You can only face that one direction.” In contrast, this hike will force him to hone in on the community aspect.

“The mountains will always be there. But the Portage for a Purpose is about people.”

Donate to Portage for a Purpose‘

If you or a loved one are struggling with suicidal thoughts, call the National Suicide Prevention Lifeline at 800-273-8255.