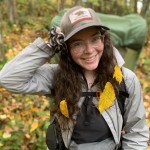 Pros and Cons of Hiking the MST Mountains Section in March

They say that if you are not certain which path to follow, it is time to make a list of pros and cons. In this case, this list serves as a practice of hindsight. Did we make the right decision to start the Mountains-to-Sea Trail in March in the mountains?

Pro: There is plenty of water.

Hiking through North Carolina’s mountain ranges in the Spring, there was fresh water streaming out of every mountainside. There were some places where it felt like we were rock hopping seasonal streams for miles. We each carried no more than a liter of water at a time. The waterfalls were rushing. There was no water stress for weeks this first month of the trail. It was a thru-hiker’s paradise.

Con: There is plenty of water.

Fording Deep Creek in the Great Smoky Mountains was our first defeat…and we encountered it about nine miles and 2500 ft. down the trail from the western terminus, Clingman’s Dome. The day prior, we slogged through inches of rain on the approach to the highest point on the Appalachian Trail (AT). We avoided the flash floods of which the National Park Service warned, but still had to deal with the aftermath further down our trail. As we departed from the AT and followed the Fork Ridge Trail, we could hear the rushing waters of Deep Creek nearly three miles away. It sounded bad. Full of anticipation and anxiety, we descended the gradual slope and climbed over a muddy, slick blowdown to the edge of a white water stream. We could see the bear cables of our tent site, #53, across the roiling pool that rushed into a series of rocky cascades. The rhododendron reached over each side of the creek creating a network of branches to trap hikers swept down the river. The brush was already too thick to hike upstream and the banks were too rocky downstream. Honestly, we were scared, and how embarrassing would it be to drown on the first day? I am certain there are hikers who could have and would have successfully forded Deep Creek at that moment, but it was not going to be us. We felt that there was no safe route to reach the other side and decided to turn back. 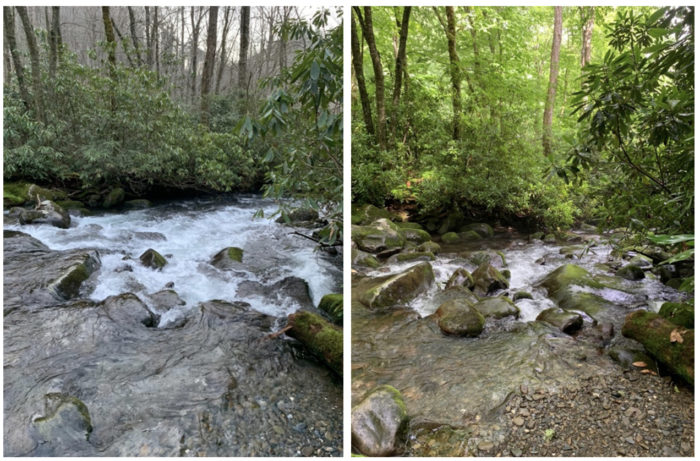 We felt vindicated in our decision to turn around when we saw the difference in water level on our return trip to finish those 19 miles in the Smoky’s that we skipped. The photo on the left was taken in March 2021 and the right was taken in July 2021.

Pro: It was beautiful and sunny for weeks.

For the first month of the trail, North Carolina graced us with beautiful weather. I could count on one hand the number of days that it rained. There were a few but not nearly as many as I expected for Spring in the mountains. The vast majority of the days, we hiked under the sun and clear, blue skies. It made for stunning vistas and quiet, peaceful nights.

Con: It was beautiful and sunny for weeks.

Though the streams were swollen, the leaf-covered forest floor around them was tinder-dry. One night in the Middle Prong Wilderness, we were camped in a tent site at the top of a rise near an open field. At 2 am I woke up to the smell of campfire. At first, I thought it was my sleeping bag emitting the smell from nights past, but when I poked my head out, the smell was stronger. I yelled out to my dad, and we crawled out of our tents to see thick smoke wafting between them. We had no idea what to do, where it was coming from, or if we were at risk. The forest service’s website had neither alerts of current fires or prescribed burns in the area, nor did they have an emergency number to call when smelling smoke in the middle of the night. I could not find any indication of a fire on the various online fire maps. I did the only thing a sleep-deprived, terrified hiker would do and called 911. The woman kindly listened to my situation, but all she could say was, “Uh, I think they’re doing prescribed burns over in Tennessee. I don’t know what to tell you?” With no answers, we attempted to get a few more hours of sleep and the smoke had mostly drifted away by the time we left camp the next morning. Maybe it was the prescribed burns after all. Weeks later as the mountains section came to completion, we met another eastbound MST hiker. One of her first questions: did you get caught in the forest fire? This is how we learned about spring fire season in western North Carolina. 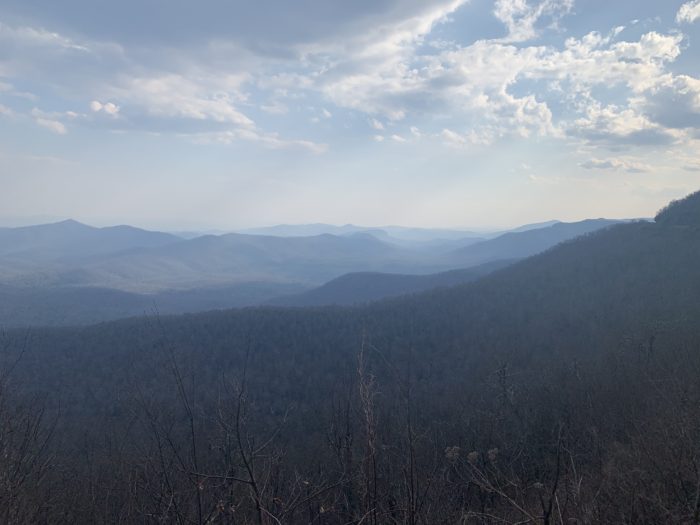 The smoky view from the Pisgah Inn during Spring fire season.

Our first day hiking out of Cherokee, NC, we began to follow the Blue Ridge Parkway (BRP). Although the Friends of the MST are constantly working to move more of the trail off the road, these first ten miles required us hikers to walk along the shoulder of the BRP with several side-trails that wove around the tunnels. We reached the entrance to the BRP just before 9 am to find the bridge blocked by a gate and a “road closed” sign. My dad shrugged before sliding around the gatepost, “I hope that’s only for vehicles!” The lack of traffic and crowds was marvelous. We walked side-by-side up the middle of the BRP. We had the overlooks and trails entirely to ourselves. We never had to worry that a tent site might be full. We only had company for one backcountry campsite in the entire section. All the other inconveniences and challenges were incomparable to this luxury.

While the lack of crowds and traffic made for a pleasant hike, the off-season did not come without logistical challenges. The camping was already limited in parts of the trail and the fact that many campgrounds had not yet opened for the season presented another difficulty. Several campgrounds, such as Mile High and Doughton Park, did not open until mid-late May. Others had only been open for a day when we arrived. The Pixie Inn in Linville, NC had opened a weekend prior when we hiked out of the Pisgah National Forest in late-April. We were both nervous to stealth camp, so we opted for longer mileage and the higher cost of staying in cabins for the first few nights. We made it work, but we certainly could not have started any earlier. 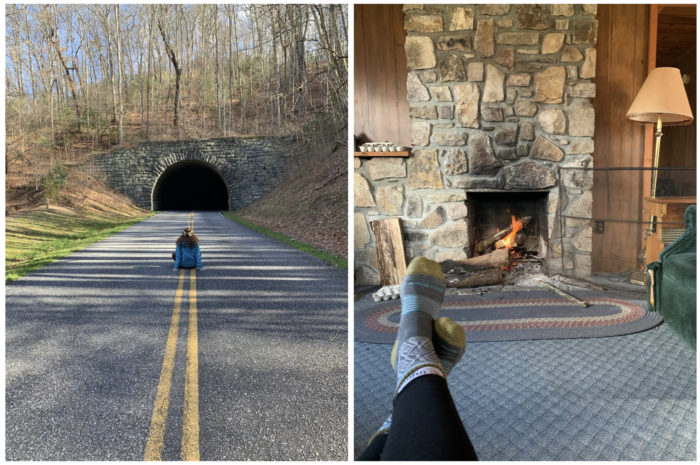 Left: Sitting in the road on a closed Blue Ridge Parkway. Right: Enjoying the fire a Mountaineers Restaurant and Fireside Cottages cabin in Maggie Valley, NC.

Pro: The hiking weather during the day was cool and comfortable.

While some of the mornings were cold, the days usually warmed to a comfortable 60°F. Some days required a light long-sleeve layer, and on others I could rock the sleeveless hiking dress. What we never encountered in the mountains in March or April was a long, uphill slog in blaring heat or humidity. Since we had enough layers, temperature control came easily.

Con: The hiking weather during the day was cool and comfortable.

When we left Maine, we thought we were heading to the heat of the South. What we soon realized was that the weather in coastal Maine at the end of winter was strikingly similar to the weather at high elevations in the North Carolina mountains. While midday onward was comfortable hiking weather, the nights and mornings were absolutely freezing—think 16°F and frozen boots.

Frozen icicles line the trail through the Nantahala National Forest.

In the end, the early start meant that we could finish the hike before the fiery late summer temperatures of the Coastal Plain. If I were to hike the MST again, I would consider starting at the beach in March and following the warm weather as it traveled west. And if I were to hike through North Carolina’s mountains again, say on the Appalachian Trail, I may wait until May 1st.

Hi, I’m Claire! But some folks know me as Marmot. I’m a thru-hiker and geographer. I’ve completed five thru-hikes so far, and when I’m not on trail I study the interactions between hikers and their environments. I hike for the people, the wildflowers, and surprisingly the food. Follow my blog for my takes on the trail, local histories, fun ecology facts, gourmet backpacking bites, and of course, the best coffee along the way.