I woke to an orange light filling the small shelter I slept in.  Stepping out I found myself sill in the clouds, but they were breaking up as the sun rose above the horizon just obscured by the final few hundred feet to the pass.  As more and more blue was filling the sky I decided it was time, á bientôt France – see ya again soon. 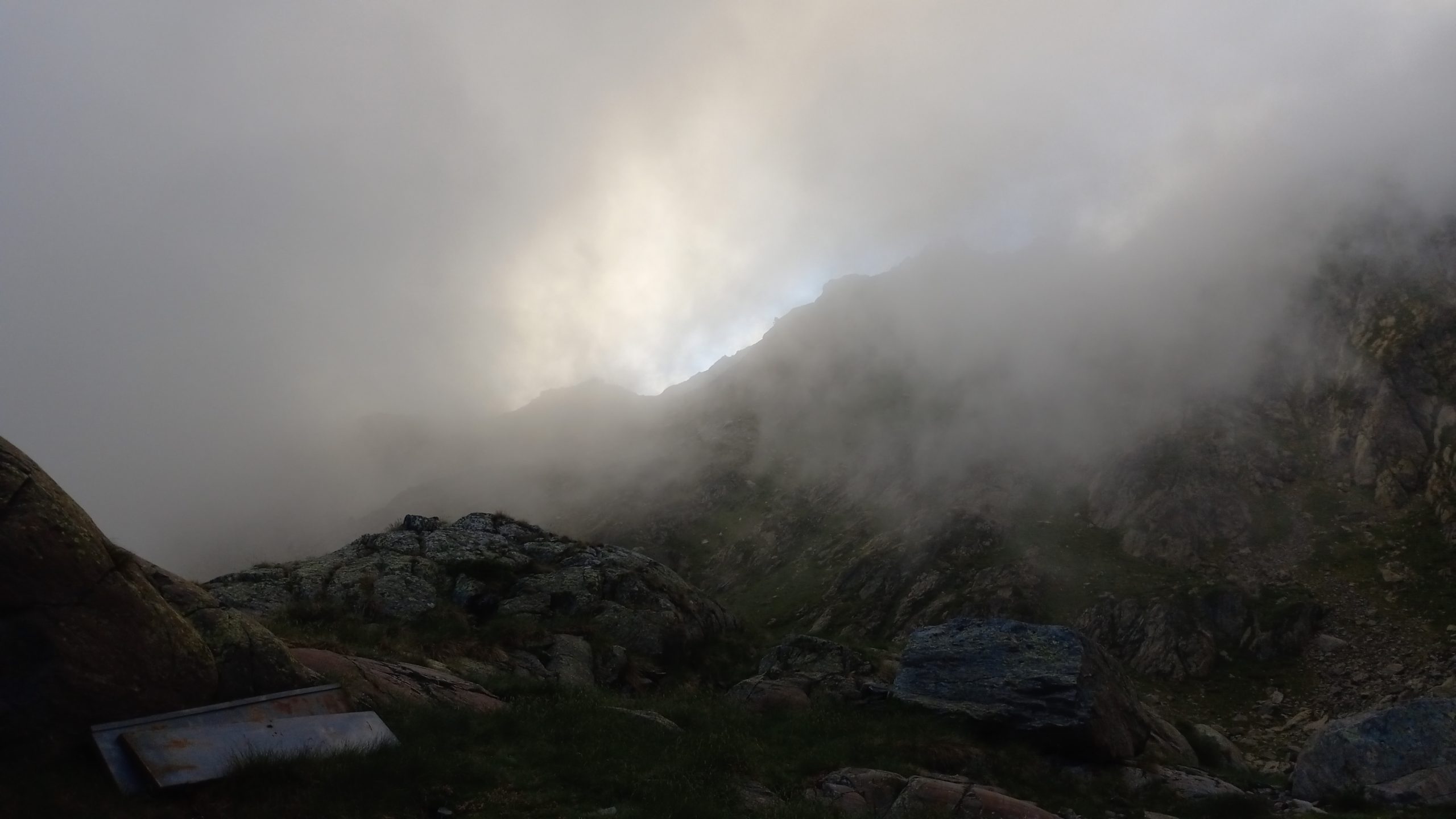 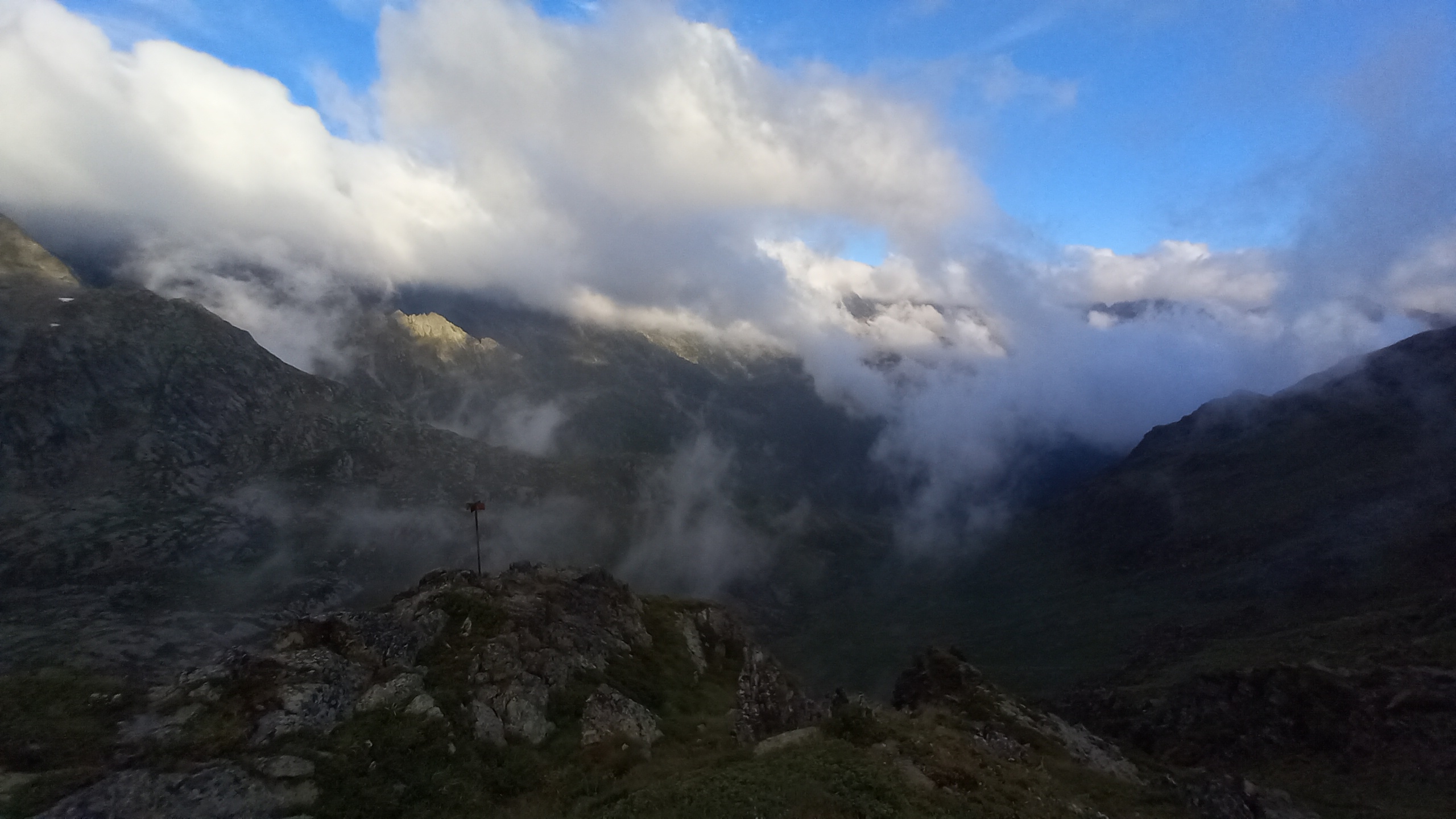 I climbed to the small gap in the jagged ridge, The Rats Pass and got my first full view of Andorra, a tiny soverign microstate tucked into the High Pyrenees.  From wikipedia-

Believed to have been created by Charlemagne, Andorra was ruled by the count of Urgell until 988, when it was transferred to the Roman Catholic Diocese of Urgell. The present principality was formed by a charter in 1278.  Andorra is the sixth-smallest state in Europe, with an area of 468 square kilometres (181 sq mi) and a population of approximately 79,034.

The view to the East and South was directly into another ski area that is a competition site for the Freeride World Tour, Ordino-Arcalis.  A nice, long pause on the pass, then down along the Western side of the slopes and past a couple calm lakes was a very pleasant way to start the morning. 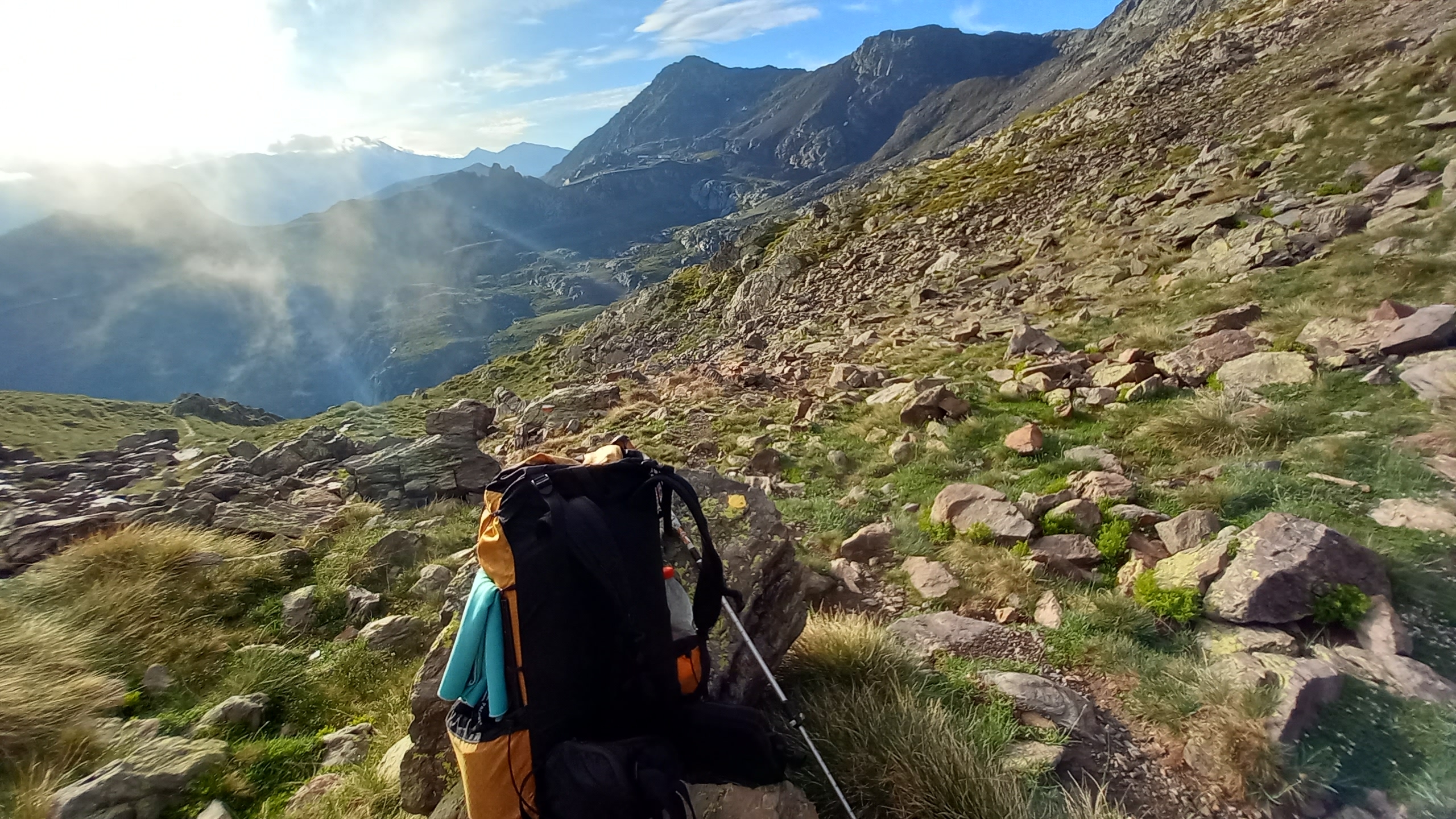 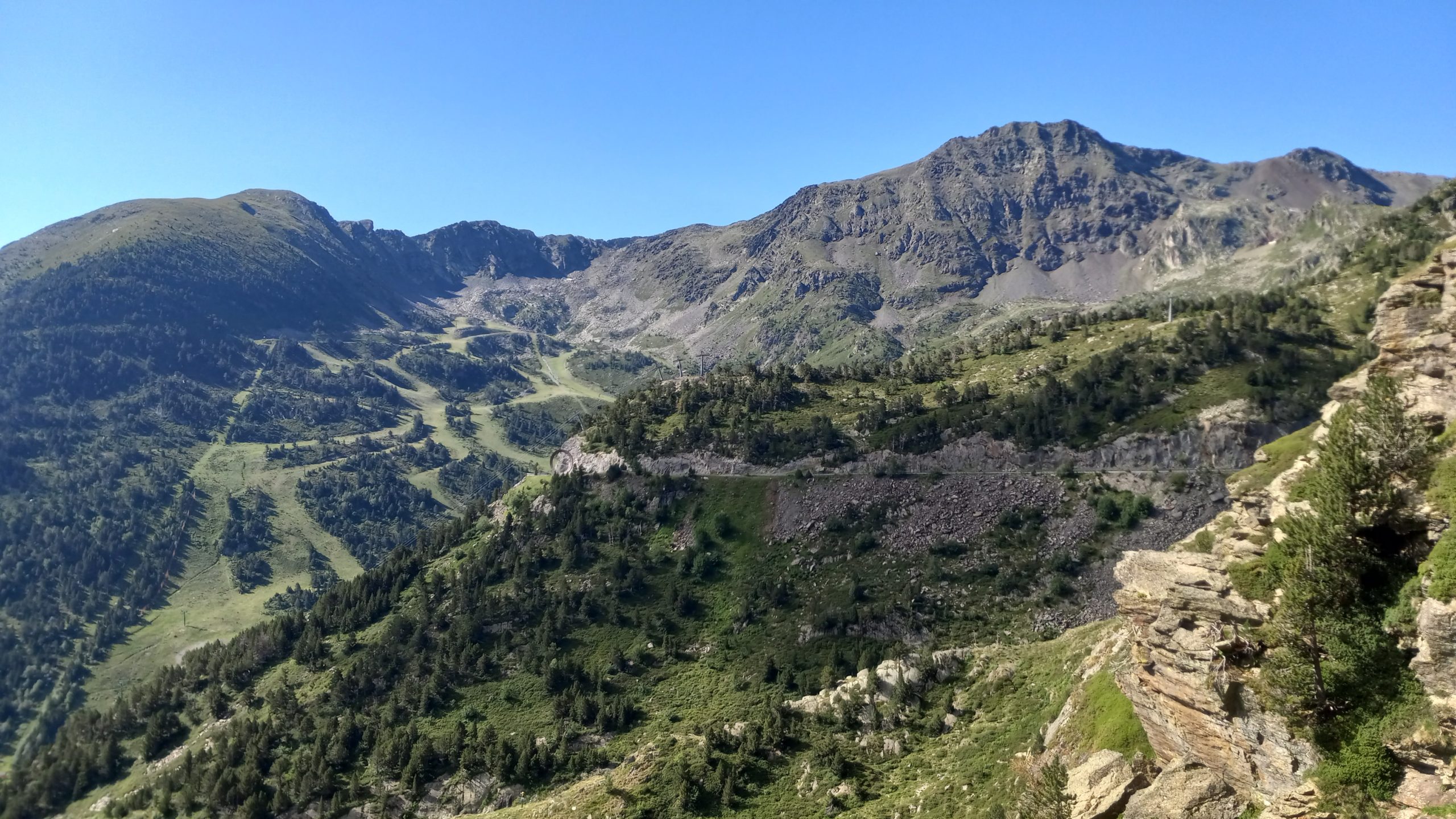 The trail led to a small hamlet called El Serrat where I was able to catch a bus for €.40 down deep into the valleys where the slightly larger towns are for some much needed town food and a resupply.  After topping off my tummy with a pint of ice cream it was time to head back up.

A little way up a dirt road from El Serrat was a manned chalet, the Refugi Borda de Sorteny.  It was very busy, when I tried to ask the host a logistical question and he understandably prioritized the paying customers rather than talk to me I took my leave and headed higher.

After a long meadow and a steep short climb along a stream the trail led into another small plateau where there was a small shepherd’s cabin occupied by a friendly young couple from Scotland.  They were ok with me setting up my tent on the leeward side of the cabin out of the steady wind, so we chatted as they got small cooking fire going and the sunset started glowing. 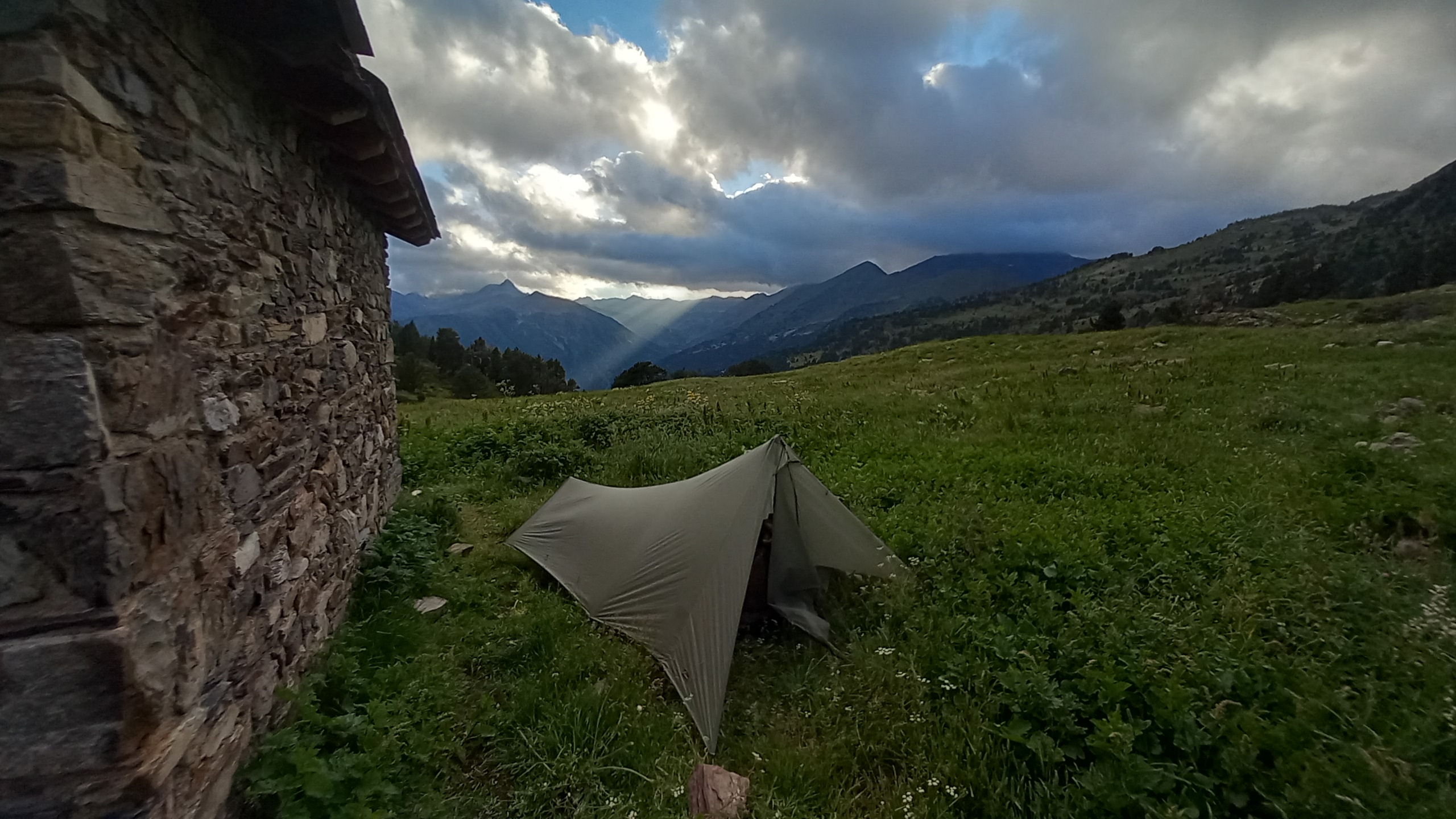 I got an early start to approach the pass to the East in the morning shade.  A good thing too because the environment turned mostly alpine with very little tree cover and after the Coll de Meners the trail stayed close to a high contour for most of the rest of the morning. 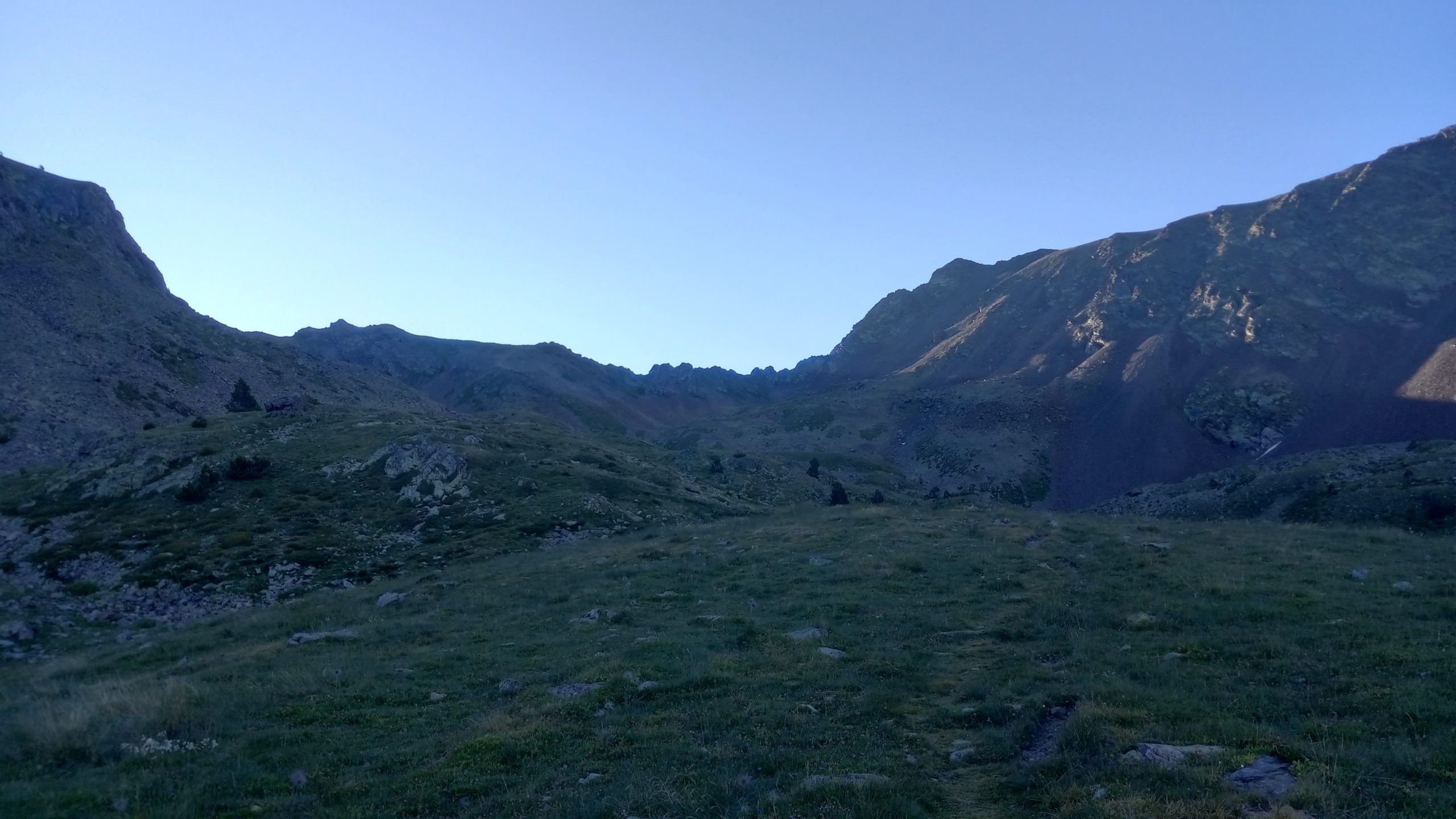 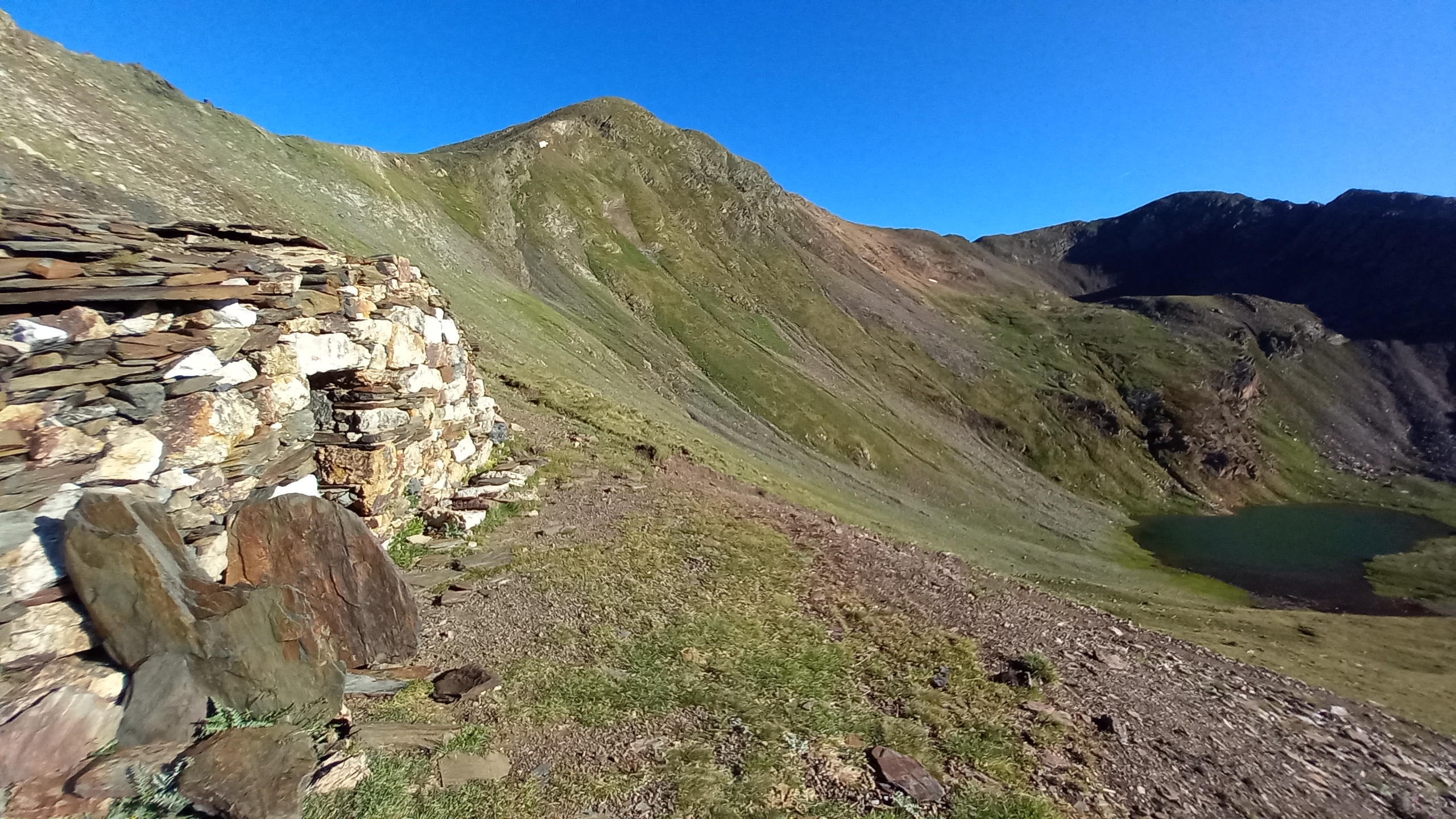 After cresting the pass the trail led down past a very well built stone emergency shelter, then a couple small lakes, then up a stream past pristine waterfalls to the very nice Refuge de Coms de Jan.  I paused for a while to eat second breakfast and do a little washing in the outflow of the small lake below.

Onward the path undullated over short steep false passes and along contours along the curved hillside.  Another refuge, the Refugi de Cabana Sorda, was timed perfectly for a lunch spot.  The view was a wide panorama of the valleys and surrounding peaks of Andorra.  Along past another stream cut valley and up a short climb was yet another refuge, the Refugi de Juclar. 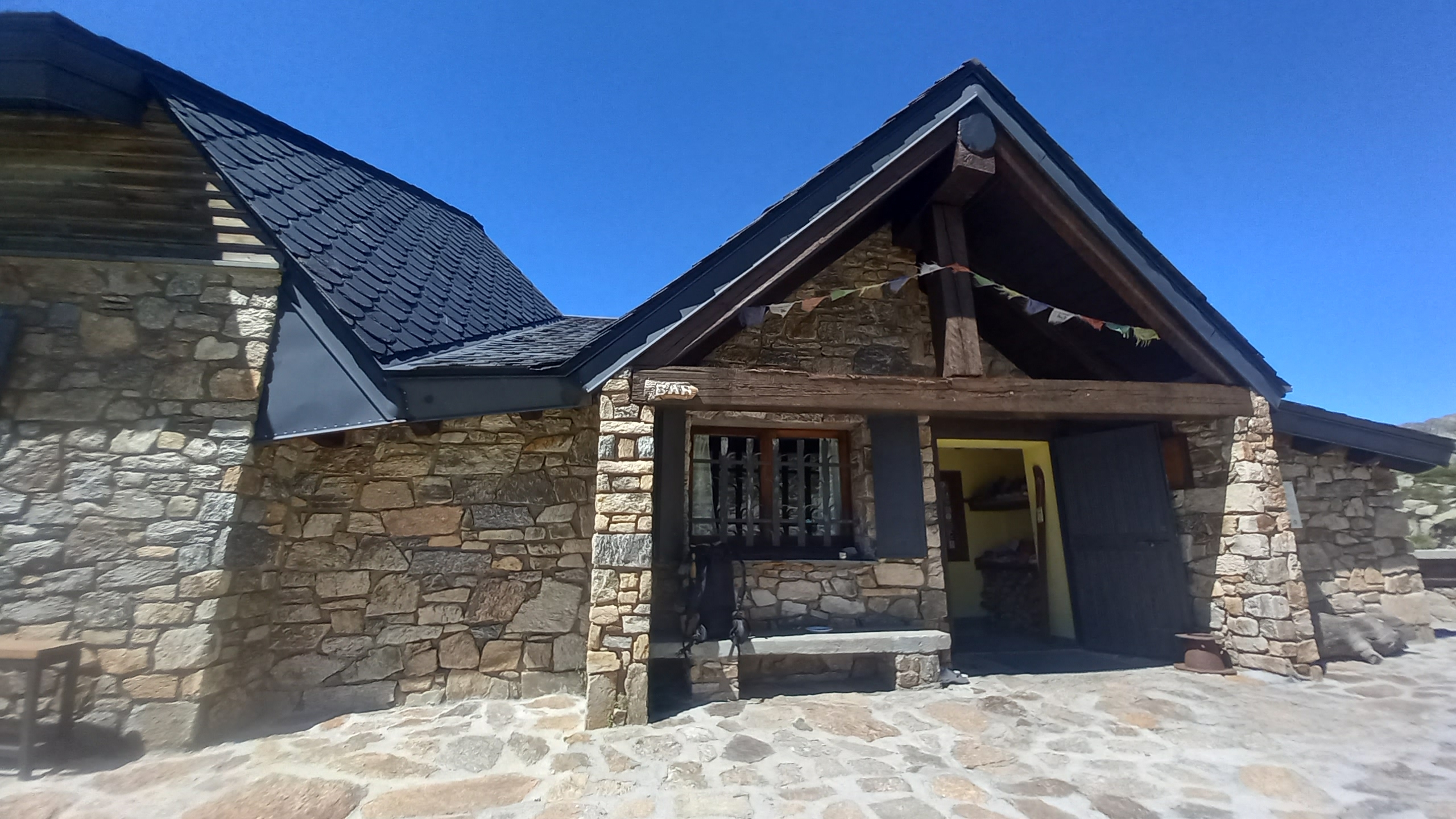 At this point it was hot and time for a midafternoon siesta.  This refuge felt like a special spot- good music, good vibes, Tibetian prayer flags fluttering, and a beautiful setting.  I had a short power nap in the shade, then enjoyed a couple glasses of good wine and an incredibly rich vegan brownie before heading out into the cooling afternoon air. 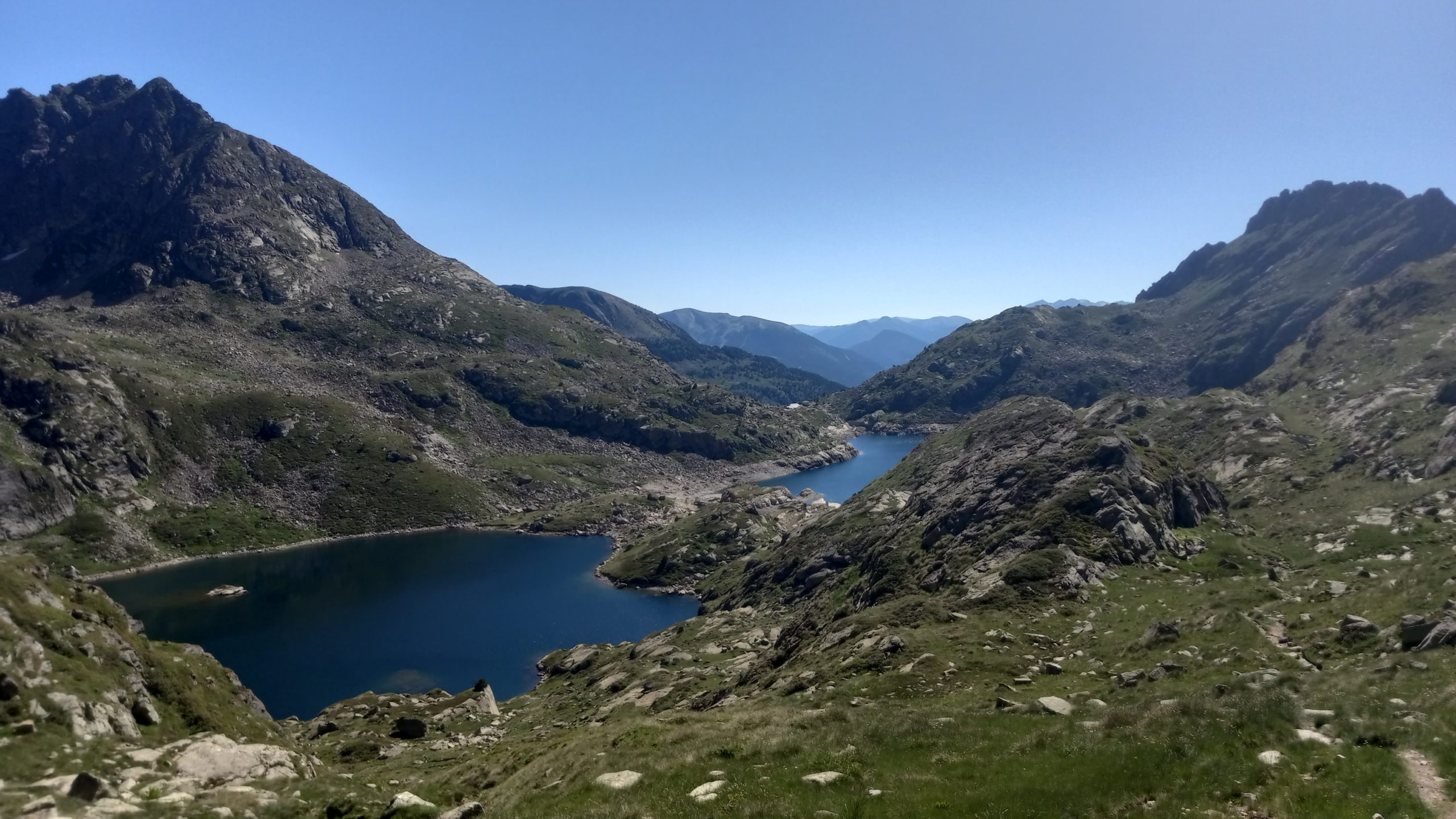 The trail led through boulder fields, first along a reservoir then a small lake just above it before climbing steeply for a while to the Collada de Juclar, the pass that was my exit from Andorra and rentry to France.  It was powerfully stunning on this pass with jagged neigboring ridges splitting in several directions, views on either side of lake-dotted valleys, all lit by the warm light of the late afternoon sun. 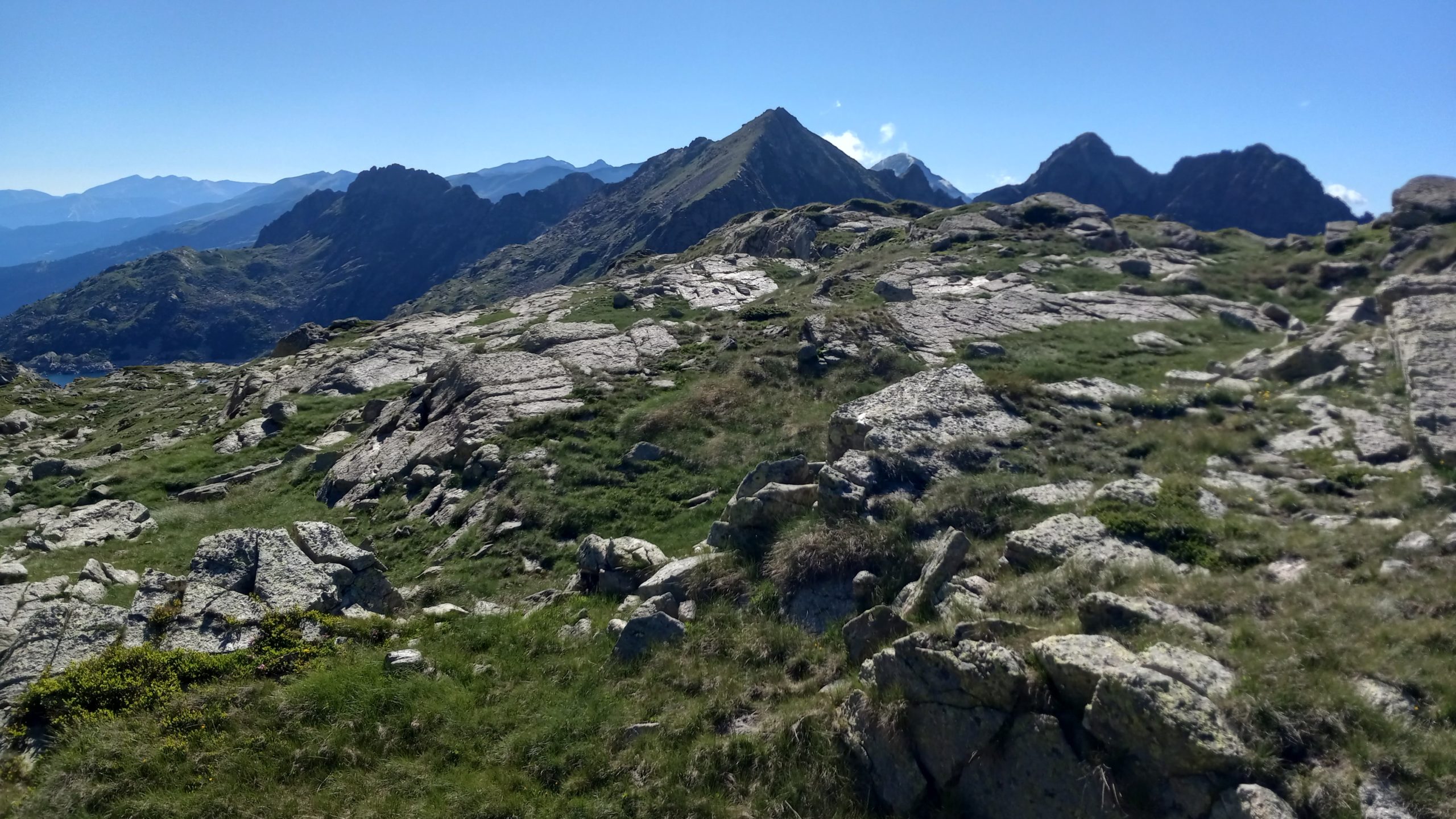 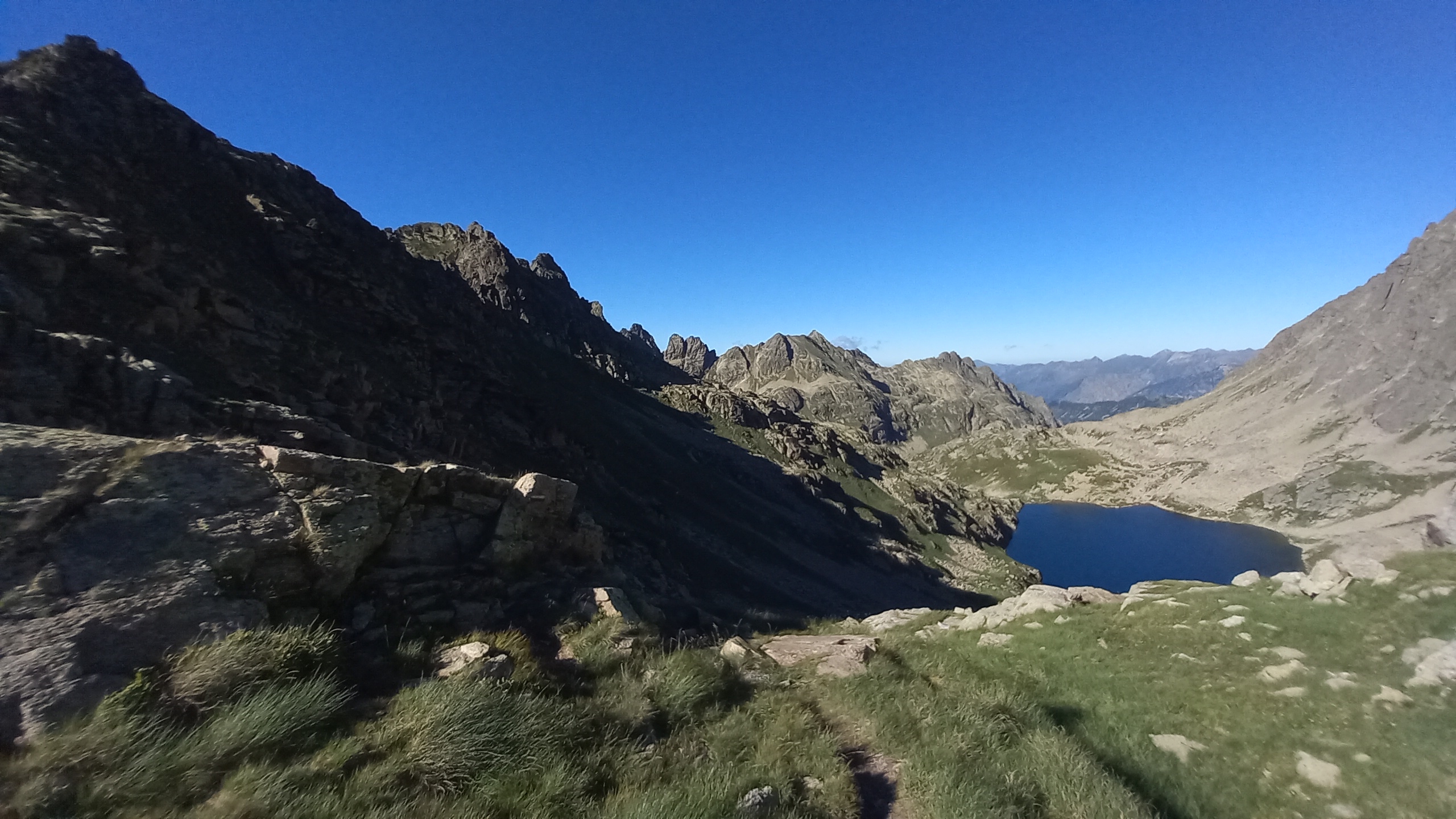 I took a long pause but because I had neglected bringing enough water to high camp I had to descend.  The first couple of lakes I passed had people camping on the good flat areas beside them, so continuing around the valley I found a short ridge between two lakes with perfect flat areas and large boulders to block the breeze.  The sunset grew very colorful as a thin mist formed and shapped into small clouds.

I had intended this to be a short day down to l’Hospitalet Près l’Andorre then a town day for laundry and blog writing, but it wasn’t meant to be.  I got into the small town a bit too early and didn’t get the ‘slow down and stay a while‘ feeling- wifi wasnt easy to find, there was a busy noisy road passing by, and eating/resupply options were limited to one cafe/tiny market and an expensive hotel restaurant.

So I had some coffee and filled my food bag with what I could find then headed back out.  From here to the end of the trail the HRP would mostly overlap with the GR10.  Out of town the trail climbed gradually for 5+ miles along an mine cart track/aquaduct/logging road/who knows what.  After turning into a valley and climbing more steeply for a while the trail eventaully leveled out near a large lake with the Refuge des Besines perched on the hillside above it. 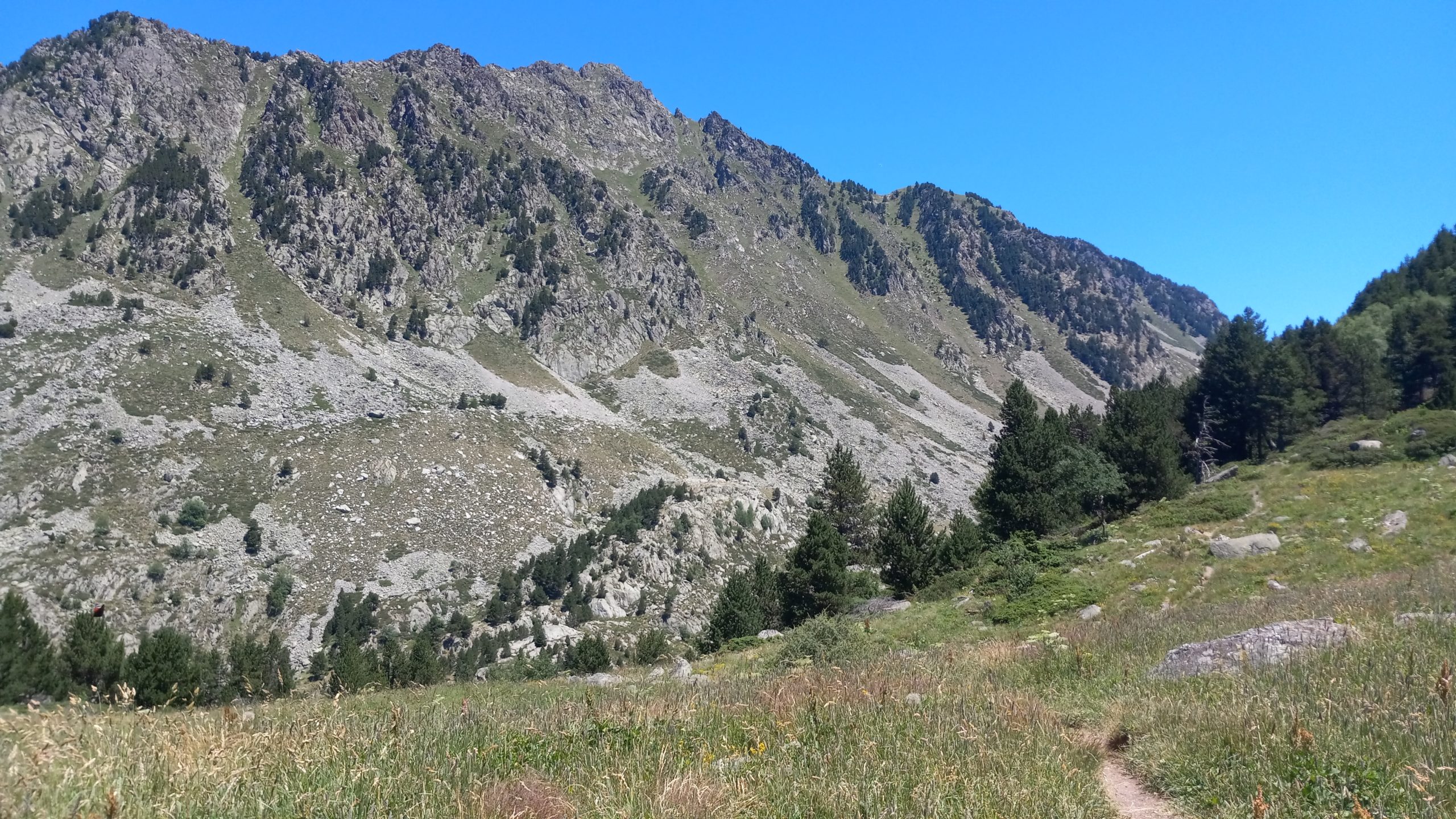 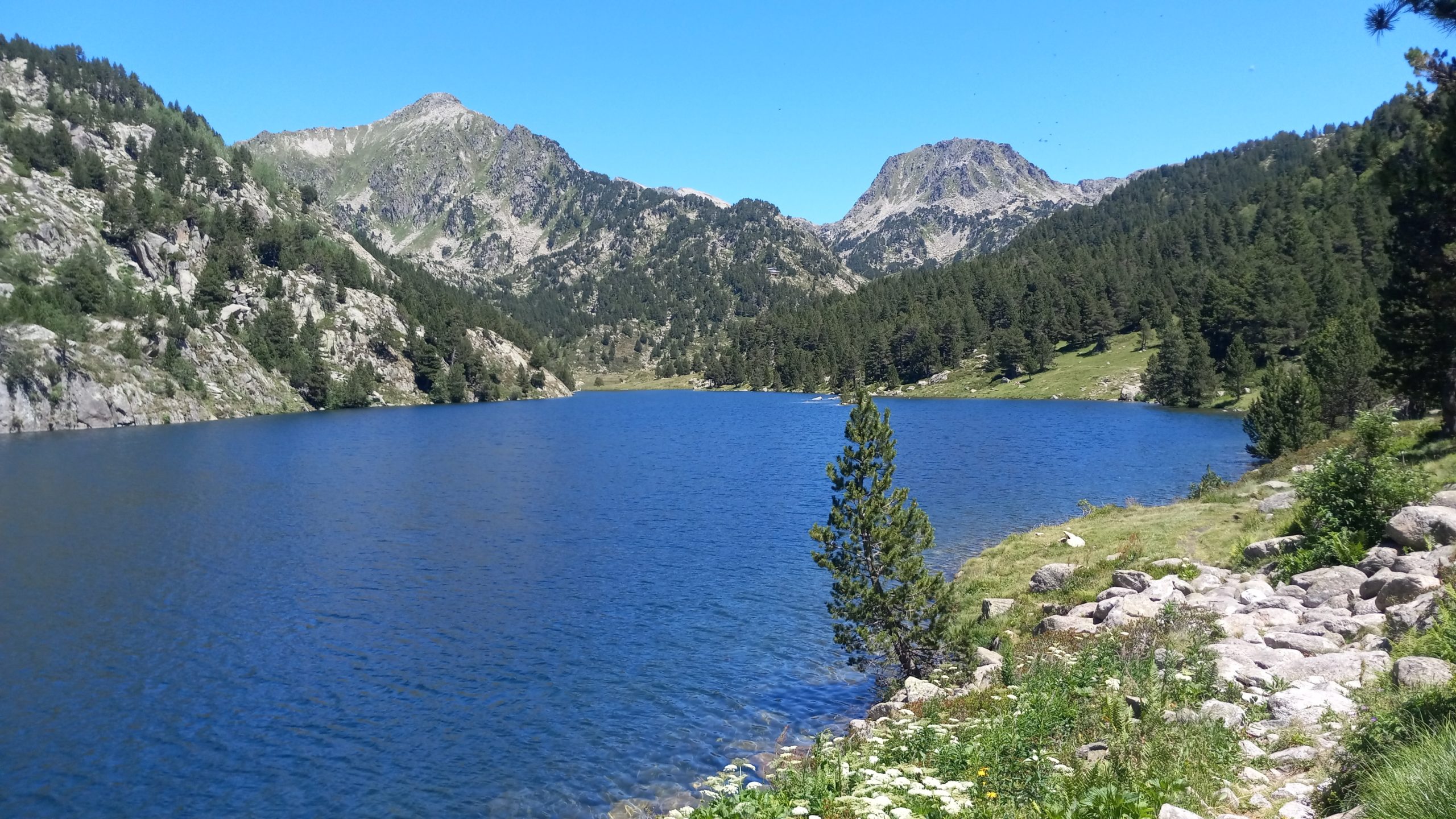 I had a couple glasses of sweet red wine, now almost routine during the mid afternoon siesta, then when a huge group of Spanish hikers showed up shouldered my sack and headed out and up another pass (Coll de la Coume DAngelo).  At the first waterpoint on the downhill side I met a German HRP hiker going the opposite way who warned me that Pic Carlit is very steep on loose sand and scree and it sees a lot of people during the day so be ready to wait for bottlenecked crowds.

Fair warning, so I decided to make a long evening and get as close to the mountain as I could in an effort to beat most of the masses with an early start.  It had been a long, hot day so the final couple thousand feet up werent easy and slowed me down considerably, but I reached the small alpine lakes at the base of the imposing peak just in time to watch as the final daylight climbed the switchbacks I would follow early the next morning. 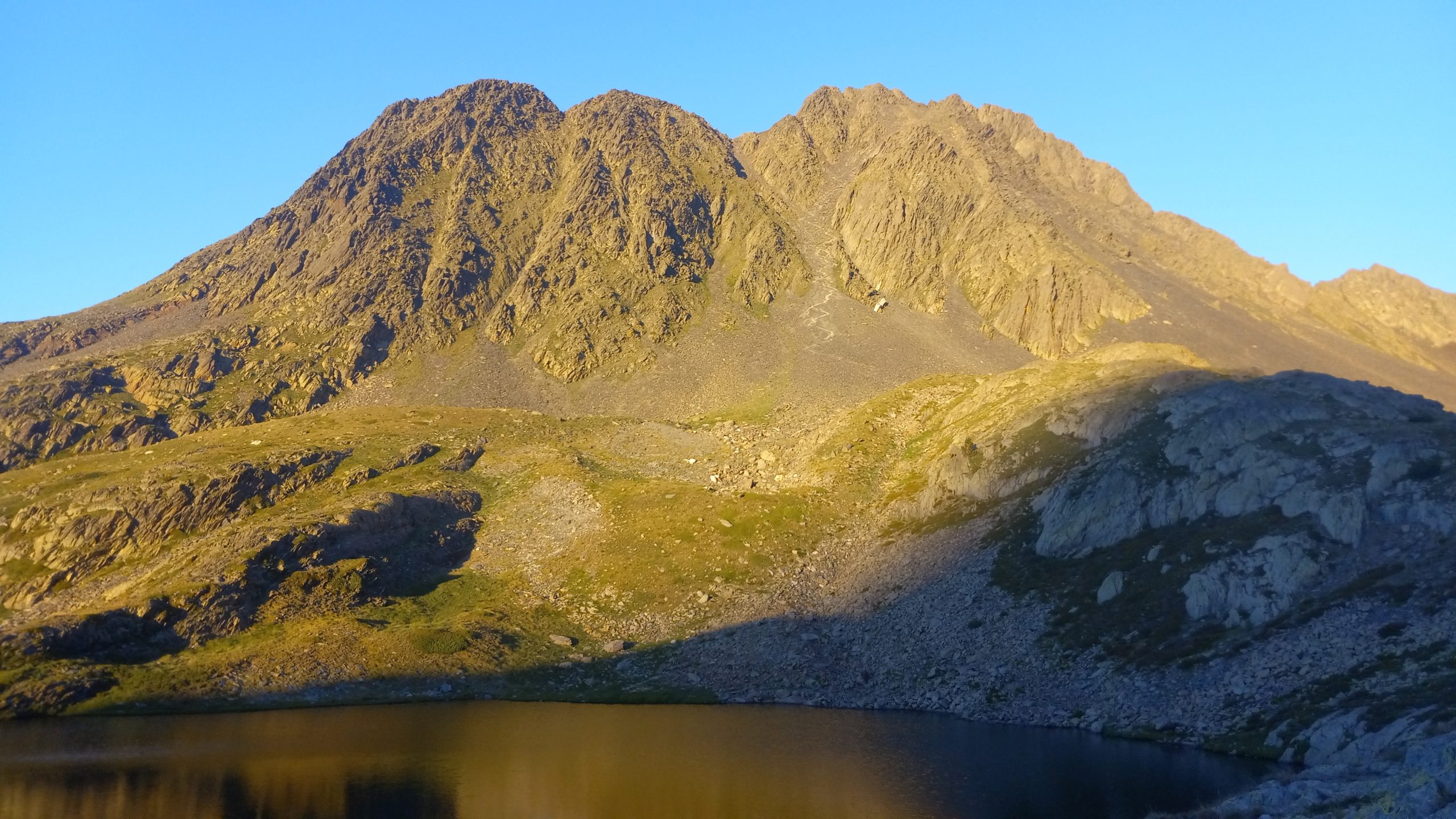 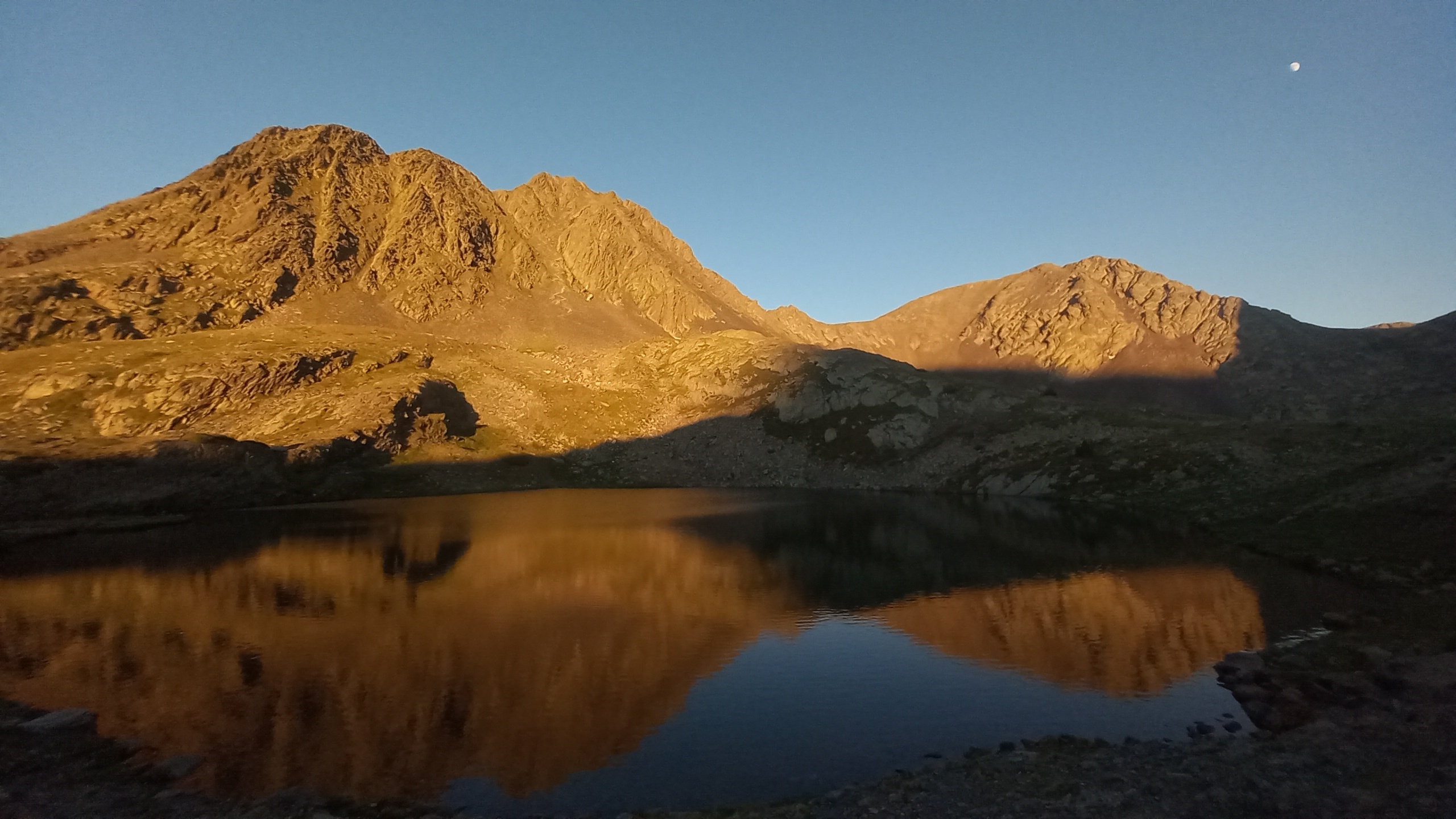 I set my alarm for 3.45 so that I could be on the move by 4.30.  Yup, it was to be a sunrise summit mostly or entirely done in darkness led only by the light of my headlamp.  Im not so sure it helped much to not be able to see the high consequence angle that grandually got higher and higher, but it did help maintain consentrated focus.  Even with that I did miss a switchback which quickly led to cliffed out scree danger and a sketchy descent that hald my palms practically dripping sweat when I stabilized back on the right path. 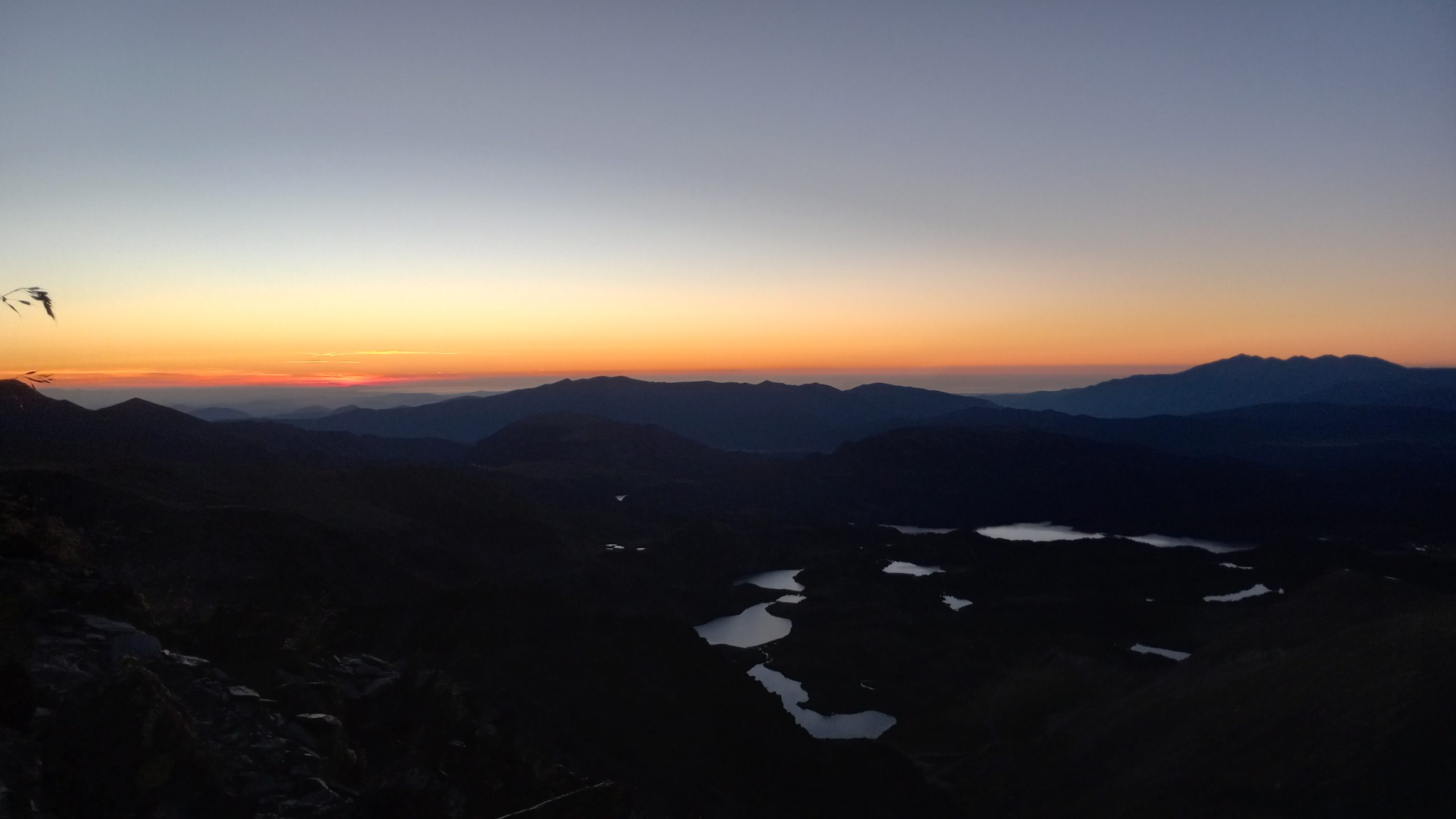 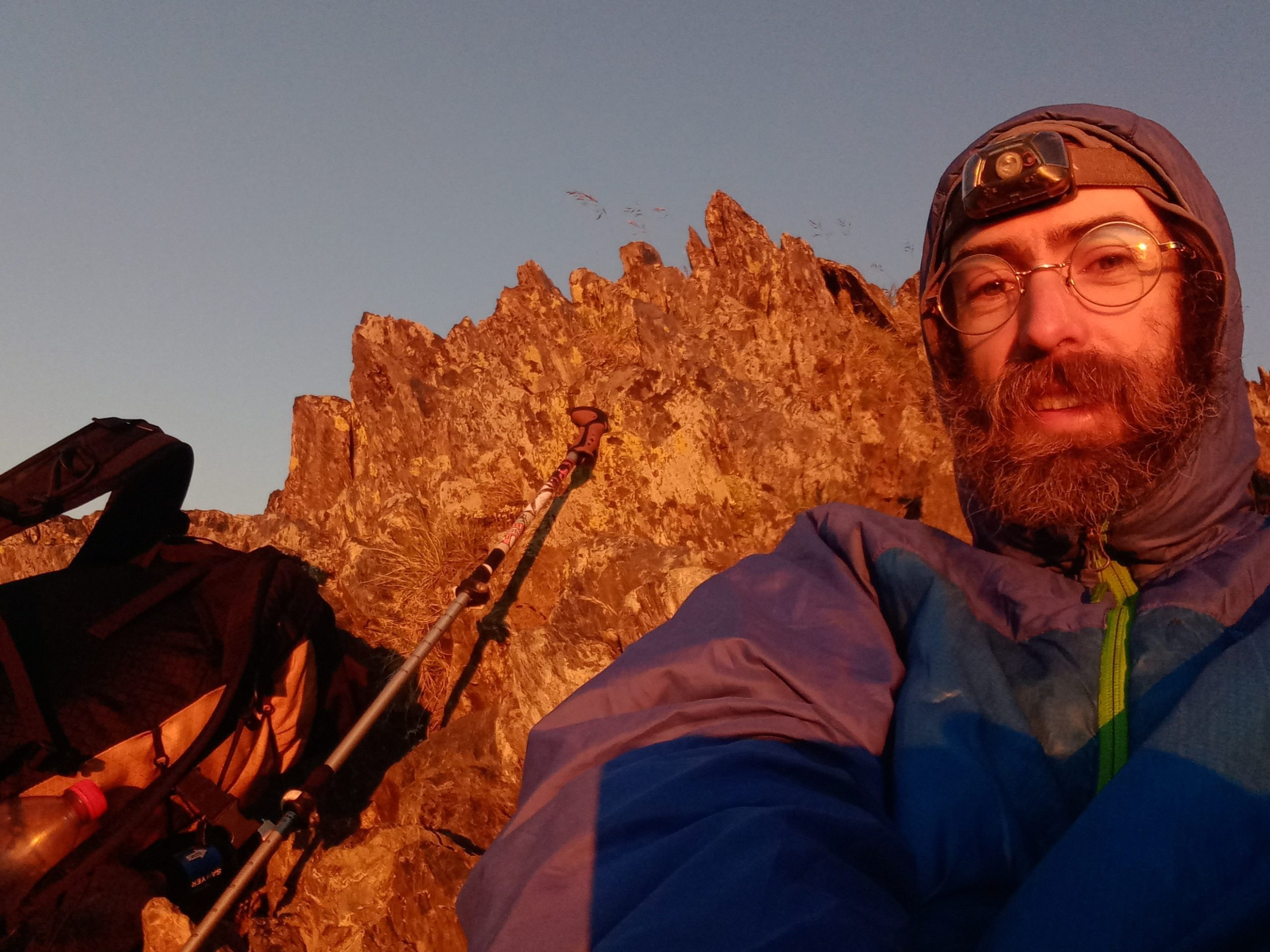 I got to the top just as the first light was coming to the far distant horizon.  As the light got stronger I realized that I was looking out over The Mediterranean!  What a thrilling feeling to see the distant water, my destination, after crossing such incredible and demanding terrain!  I stayed for a while, joined only by a couple other small groups that came up from the other side, until the orange alpine glow turned to gold then rose to fill the lake filled valley below.

A steep descent led to the bowl below and an area of crisscrossing trails connecting the many little lakes.  There were a lot of people in this area, clearly a popular high country destination.  After a long lunch pause at one of the cabins beside a lake I followed a dirt road across a small ski area and through a pine forest down to the wide valley below and the town of Bolquere.  Once again I had timed my resupply poorly, it was Sunday so everything is closed, so I spent the afternoon wandering the area looking (unsuccessfully) for wifi to write and ending up in a little camp area next to the church in the center of town. 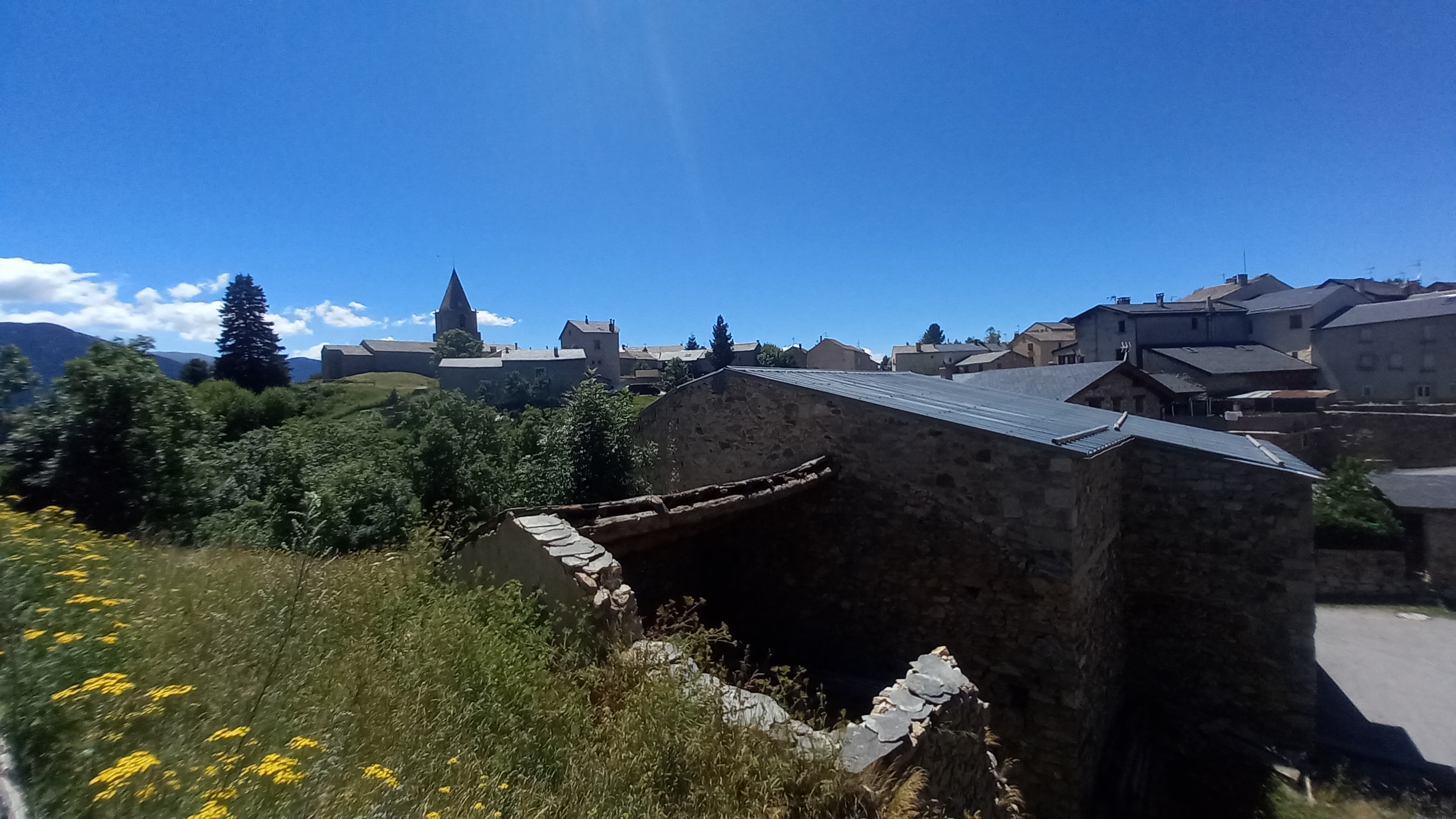 This day was a little confusing.  I was thinking it would be fun to go to Carcassonne (a castle some ways to the North) for Bastille Day, a national holiday that involves big firework shows.  So I set out to investigate transportation (a village a few K away had a train station) and lodging.  First I had to find wifi and passed through 3 small villages with no open restaurant or bar before finally finding one near the train station. 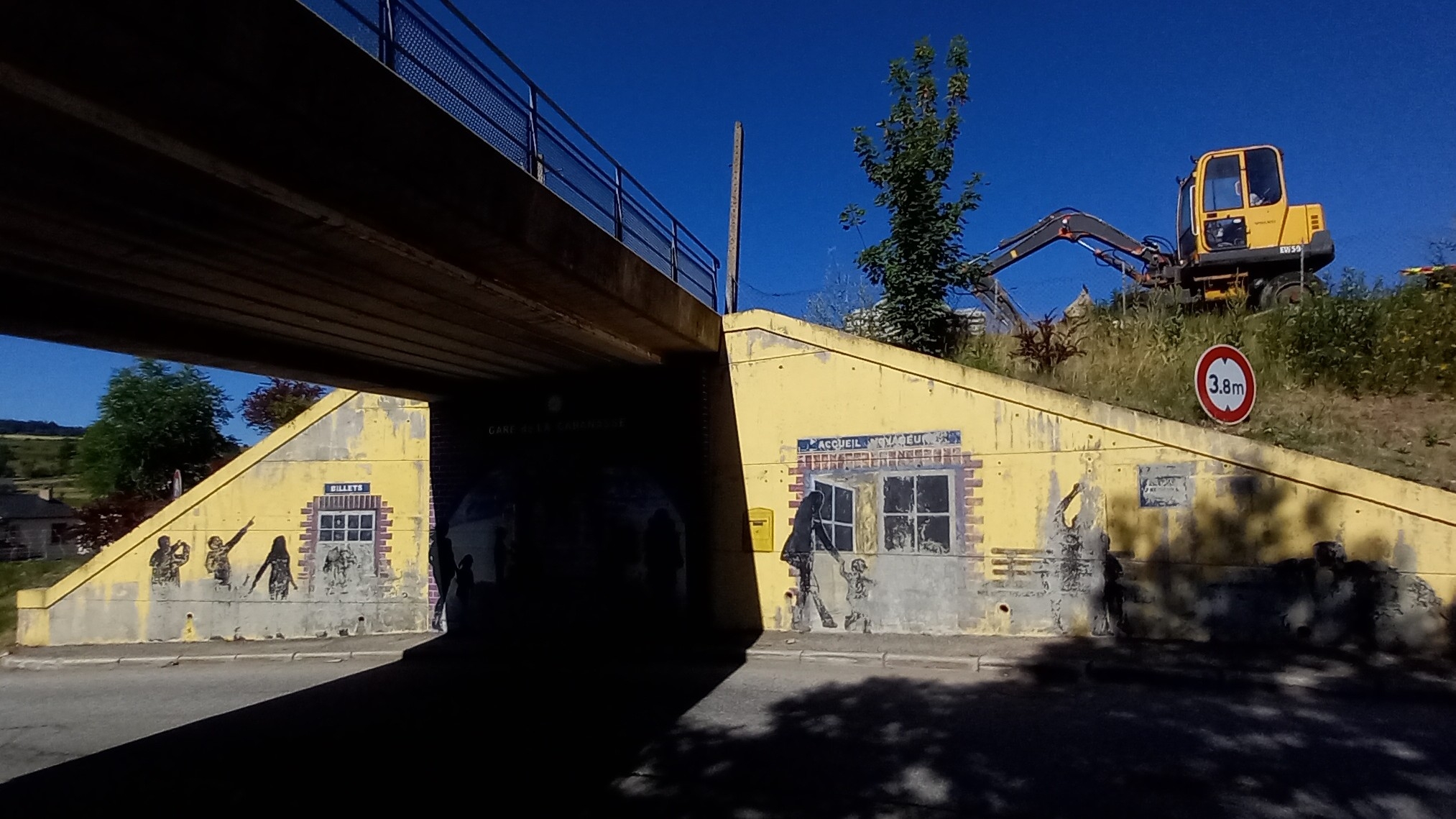 I realized that I was an extra day away from the holiday which would mean an extra day of town expenses so after mulling it over while munching on a menu de jour lunch I decided it was more prudent to just stay on trail.  I backtracked up the valley, past vast meadows and a cuddle puddle, before rejoining the HRP on the road to Eyne.  On the other side of this little town the trail became single track and led peacefully into a Nature Reserve and up along a stream through a cool forest to the plateaus in the narrowing valley up high. 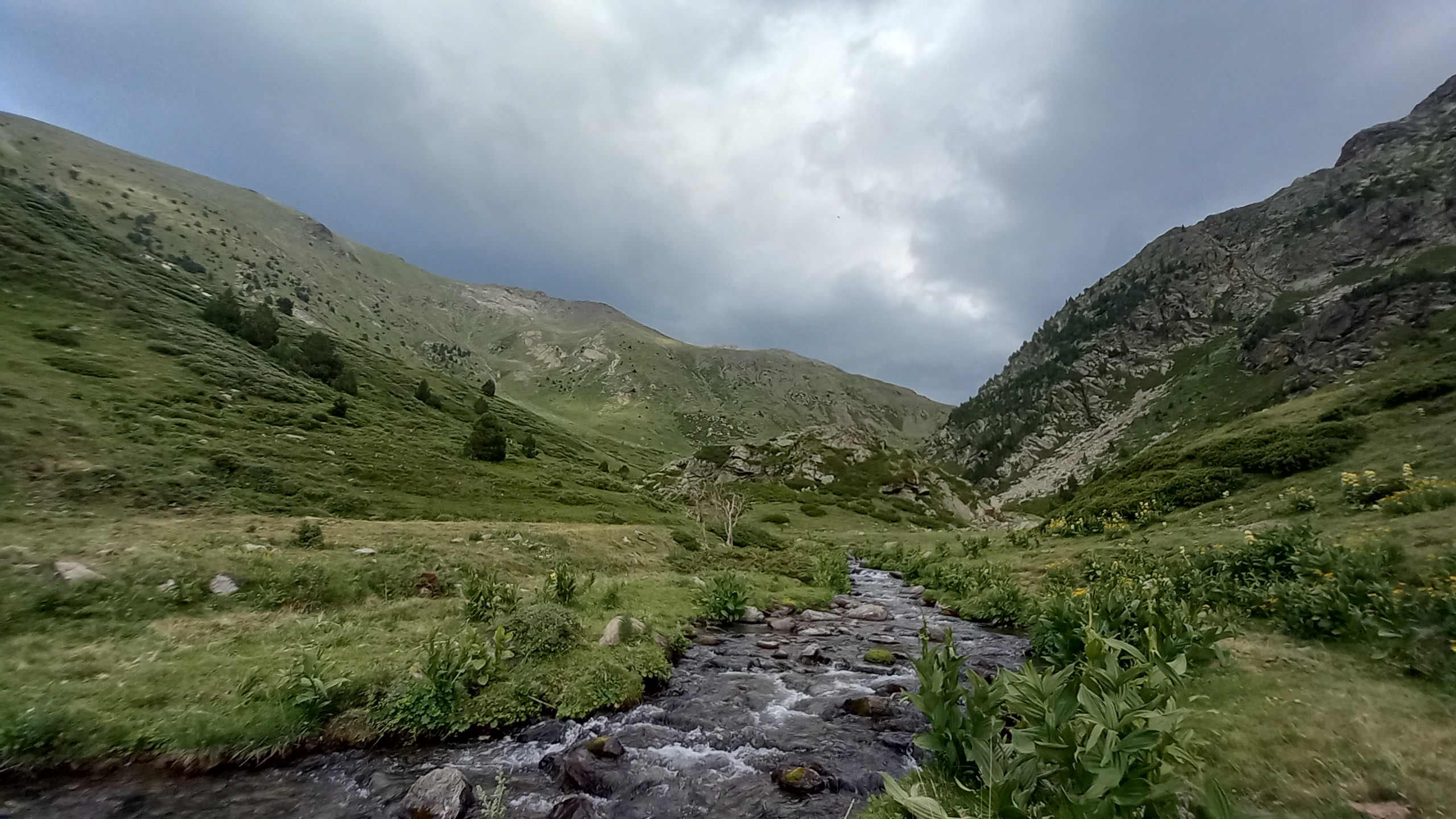 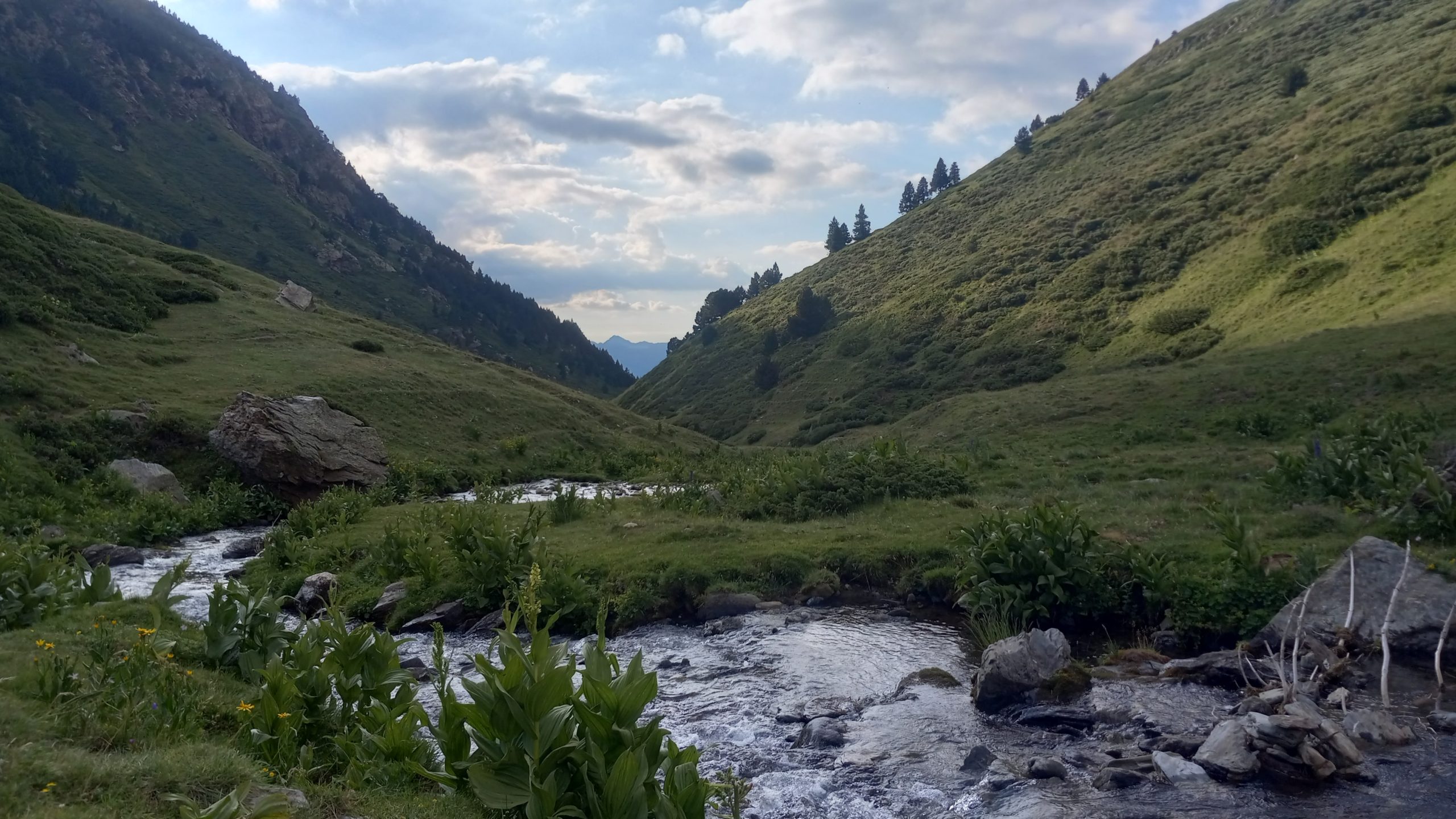 On one of these small plateaus I found an idyllic site near the stream, with a perfect view down the valley to Pic Carlit on the distant horizon.  I enjoyed another fine sunset and a calm, quiet evening of solitude, distant cowbells and the burbling stream being the reminders of a timeless presence.