By the time I woke up today, my mind was made up. I was quitting the Sierra High Route. I know you aren’t supposed to quit on a bad day, but yesterday didn’t feel bad. It felt dangerous. That’s how I am justifying my decision, at least. There were a few moments when my ego got in the way and I felt weak for quitting. I am supposed to be writing a blog about the Sierra High Route! I put it out there that I was going for the (unclaimed) fastest known time!

But these negative thoughts left after I fell into the ease of trail. No more sketchy climbing. No more route finding. No more straight uphill without switchbacks. No more worrying that my phone battery is going to die before I finish this section. With these downsides eliminated I settled into listening to Harry Potter and the Goblet of Fire and mindlessly meandering through miles. I don’t know where I am going to end up, but I’ve got food in my bag and trail ahead of me and that’s good enough for now. 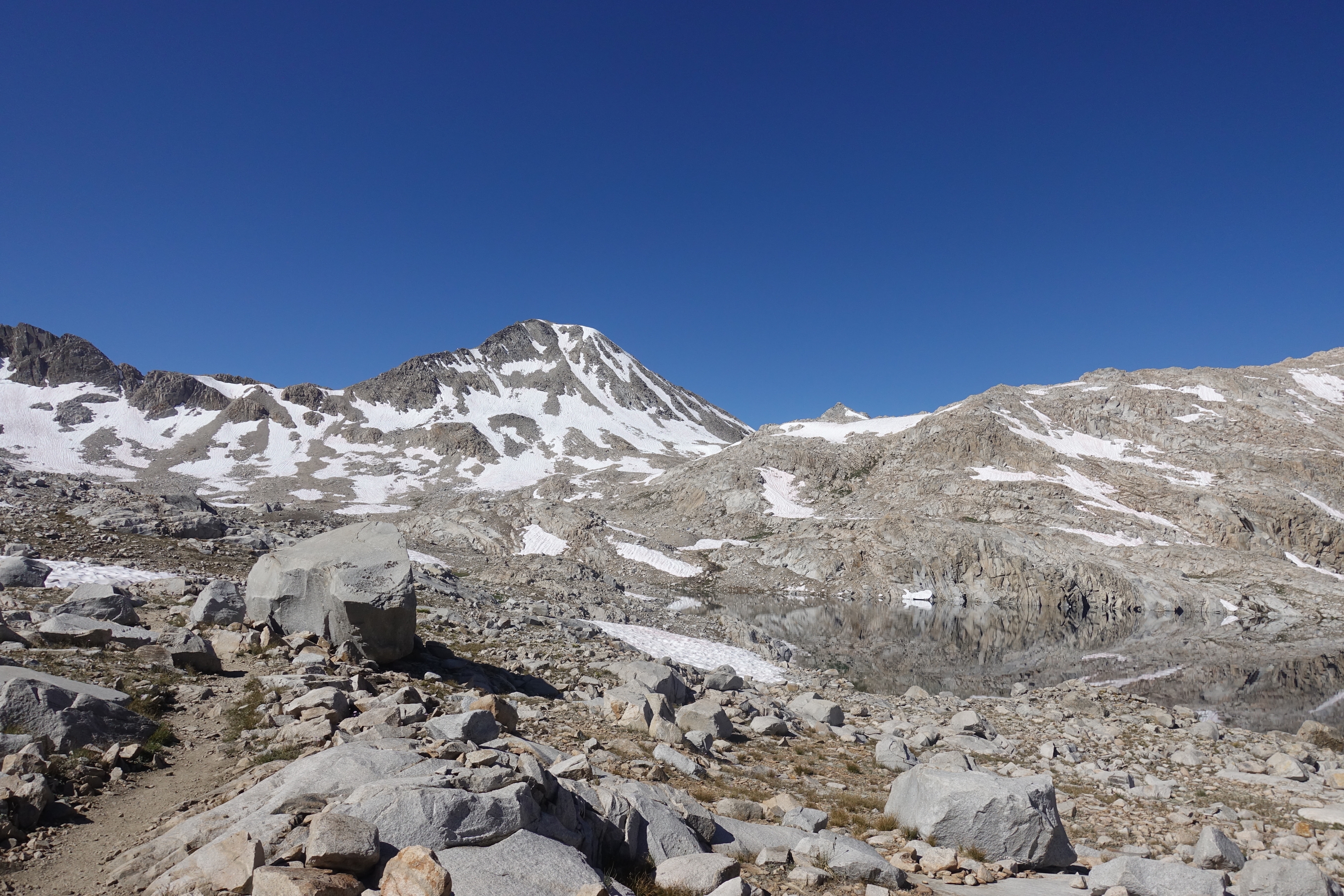 Though my mind was at ease, my legs were on fire. I didn’t bring enough sunscreen to use on my legs. I don’t remember ever putting sunscreen on my legs on previous trips. Maybe I just have a bad memory? Regardless of the past, my legs are currently fried. There was so much heat radiating off them last night that I had trouble sleeping.

Today I wore my leggings despite the heat just to keep them covered. I hate hiking in leggings. They get bunched up and make my legs overheat. Plus they prevent me from getting awesome tan lines.

I had 15 miles until I reached the top of Muir Pass with the beautiful Muir Hut. I tried not to look at Guthook and just hike. It was a nice change to run into people and chat while I hiked. 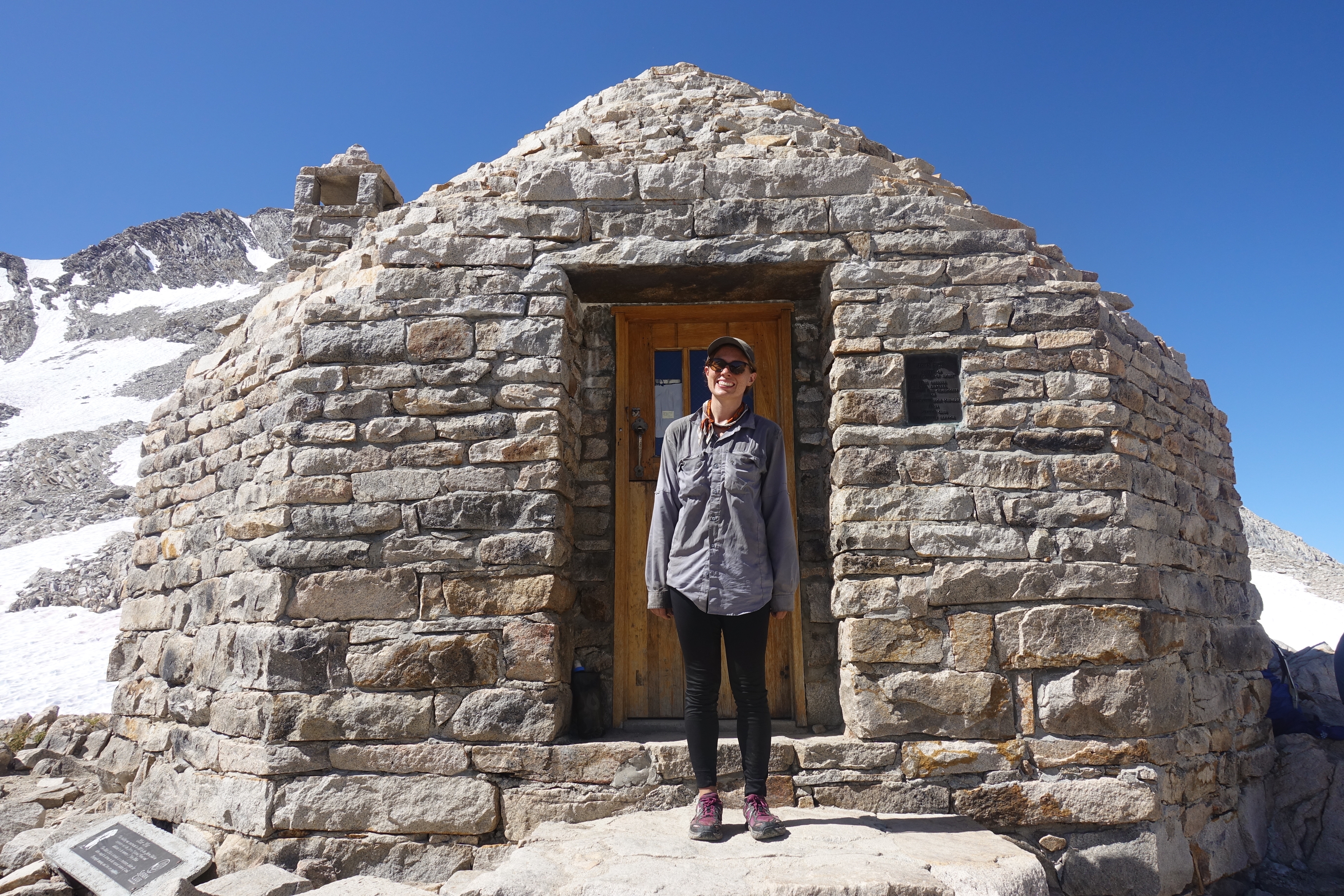 At Muir Hut with leggings on to cover my terrible sunburn.

At Muir Hut I stopped for a snack break. At the hut I ran into a PCT section hiker and an alleged PCT thru-hiker. Normally I would never question if someone was a thru-hiker or not, but this guy had gotten to Muir Hut the afternoon before and hadn’t left by 11 a.m. He said he was going NOBO and was planning on hiking the whole thing before the snow started despite it being late August. AND he said anyone that flip-flopped wasn’t a true thru-hiker. AND he was being rude to JMTers. Not cool, man. The section hiker and I told him off for that one. I was upset that such a lame dude was ruining my Muir Hut experience. 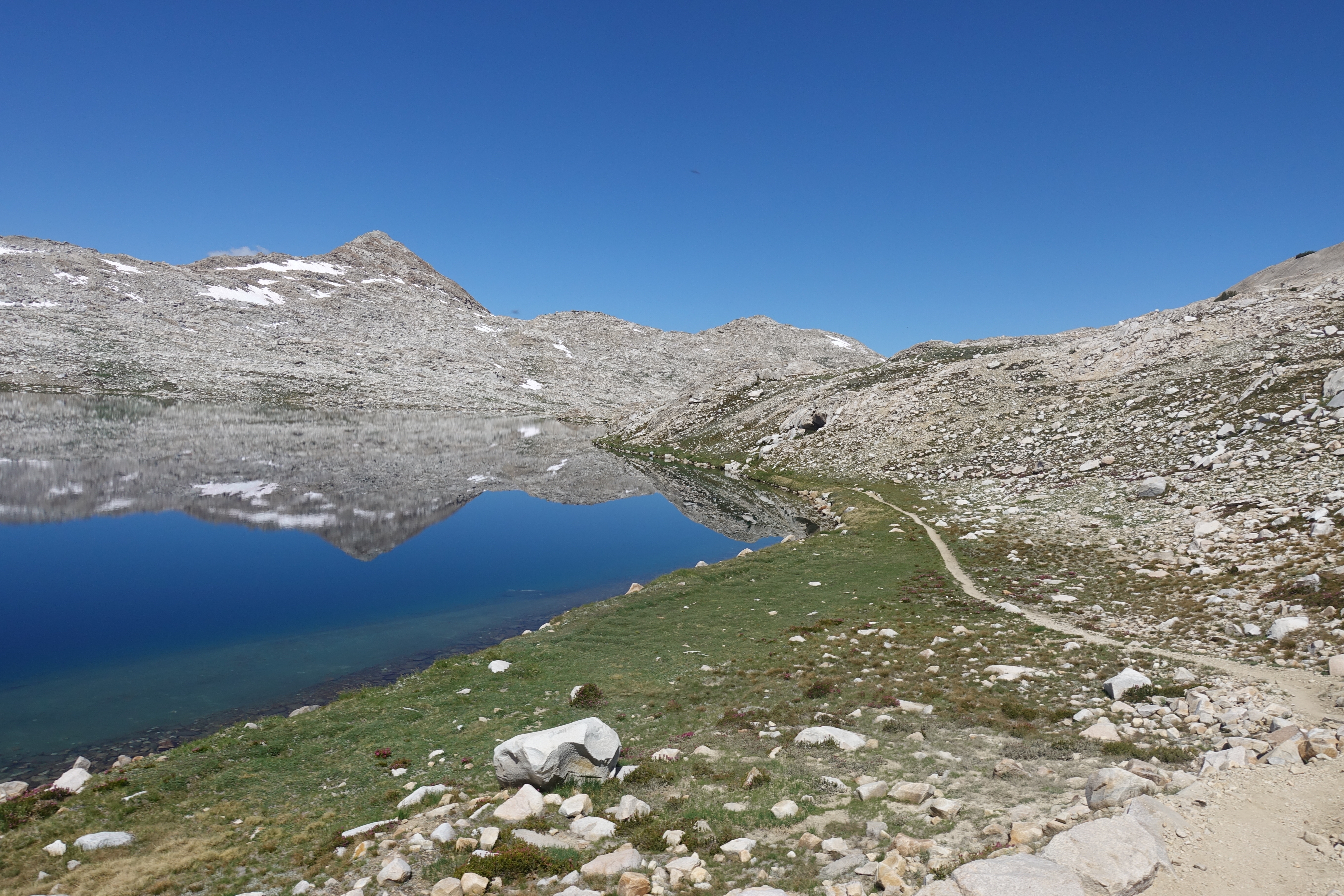 Descending the north side of Muir Pass.

If I was going to continue with the Sierra High Route, I would turn off somewhere after Muir Pass. But honestly, I didn’t even look at the map and I just kept hiking.

I ran into two SOBO JMTers as I was headed down the north side of Muir Pass. They pointed out a slightly off-trail waterfall and suggested I take a shower. It was magical. Like a baptism. A few miles later I took my first swim of the whole trip. I can’t believe it took me until day five! I skinny-dipped in Evolution Lake and then lizarded out on some rocks to dry.

I ended up hiking 24.5 miles and set up camp next to Piute Creek. I ate dinner with three SOBO JMTers, including Canadian Chris, who is hiking the JMT for the 13th time!

The best part of today wasn’t the swimming. Or the trail. Or the good company. Tonight there are so few mosquitoes that I am writing this blog post from outside my bivy. WITH. NO. BUG. NET.

No mosquitoes in sight.

PS. I spent a lot of time listening to Harry Potter today and I came up with these observations.