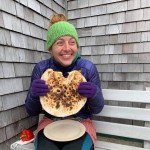 Reacting with Fear: A Woman’s Perspective on Solo Travel

Disclaimer: I am going to share ONE experience. Before you read this article know that my intention is not to complain or insult, but to share knowledge – to make people aware of how discouraging it can be when they react with fear in response to hearing that a woman is traveling alone.

Please know that not everyone reacted in a negative way! Many people were overwhelmingly positive and supportive.

Additionally, not all female hikers feel the same way I do. But, as a woman who has traveled many miles by herself – with no dog, no gun, and no partners in tow, I think this topic is worth discussion.

Negative reactions get old quick. And they make an impression.

I was utterly exhausted. Some friends and I had woken up at 4AM to catch the sunrise from Clingman’s Dome, the highest point on the Appalachian Trail. It was noon now. I was almost to Newfound Gap where I would hopefully hitch a ride into Gatlinburg for some real food and a shower.

I saw a parking lot in the distance. As I made my way to a large sitting rock by the parking lot, three people came into view. I caught the tail end of their conversation as I put my pack down some distance away.

“What a great adventure,” an old man said to young backpacker in a raspy, excited tone. “Those scout skills are coming in handy, huh?” the older man laughed with joy as if he had hiked the trail himself. After a few moments of back-and-forth, the old man and his female counterpart wished him luck and told him to have fun.

Minutes later, the backpacker vanished into the woods as is the way with those traveling the trail.

The couple looked at me. Now it was my turn.

Although I normally don’t enjoy being social with strangers, I was looking forward to this conversation. The couple seemed nice, and I was still on my new thru-hiker “high” from starting the trail. I wanted to share all the positivity the trail had shared with me by telling people about my experience so far. I wanted to rejoice in this journey with people who shared my same passion.

I was about to – so I thought.

Just as I thought they would, the couple approached me only a few minutes after the other hiker had left. The conversation was lovely. They were excited for my journey and incredibly supportive of the adventures that lay before me.

Until they asked where my hiking partners were.

This question was unfortunately not new to me. Disappointed in the fact that I was being faced with this inquiry yet again (why did people always assume I had a partner?), I proudly announced that I was hiking alone.

The woman looked shocked with wide eyes and her mouth slightly parted. The man appeared stern, with a distant, grave look in his eyes. Needless to say, the tone of our conversation took a drastic turn.

“All by yourself?” The woman asked. “You must be brave!” She said, seeming somewhat disingenuous.

Slightly annoyed at how shocked the two reacted, I chose my words carefully in an attempt to explain my perspective on how I always had a hard time understanding this concept. Solo hiking hadn’t ever seemed scary or intimidating to me in the slightest. How did that make me brave?

As the conversation moved forward, the couple seemed weary of my responses, continuing to reprimand me on how incredibly dangerous it was for me to hike by myself.

When the lecture subsided, I stood in silence. I was utterly disappointed that they had not met the excitement I anticipated entering the conversation.

Awkwardly, I excused myself, picked up my pack, and kept walking North. The couple didn’t tell me to have fun as I walked away. They told me to be safe.

The male backpacker’s conversation with the couple had been filled with such excitement; he seemed to inspire and awe the couple. I wanted to inspire people too. The other hiker and I were of similar ages; we were hiking the exact same trail.

Why had our two interactions been so different?

I could go on about how unfair I felt this was and provide more examples of similar conversations I had on trail, but I would much rather take these last few moments of your attention to elaborate on what I believe to be the root of reactions such as this.

It is my belief that (in most cases) confounded reactions are driven by the emotion of love mixed with a strong sense of fear. Love is the concern in their voice, while fear overtakes their thoughts and words.

These reactions, although understandable, felt negative in many cases, characterized by shock and concern with tones of confusion and disapproval. While I know better now, it would be a gross fabrication to say that negative tones from these conversations did not affect me in the beginning stages of my hike; I genuinely believed these words were rooted in hatred, ignorance, and disapproval.

In retrospect, I understand now that I shouldn’t have taken other peoples’ emotional qualms as seriously as I did – their emotions are theirs and theirs alone. Still, I am of the strong belief that people of all types should be met with encouragement when they’re up against a challenge. Not fear.

We as humans need to be mindful of how our words and body language are perceived, while still taking others’ opinions with a grain of salt and understanding. We are each different in culture, how we were raised, and the privileges we have received.

So open your mind, and silence your fear.
You may be surprised what a new perspective can do.

Read more about my travels on the Appalachian Trail on www.continuetheadventure.com/appalachiantrail

Updates on Appalachian Trail Closures Due to COVID-19

Updates on Pacific Crest Trail Closures Due to COVID-19

Backpacker Radio 64 | Erik Schlimmer on the Trans-Adirondack Route, Peakbagging in the Northeast, Toponyms, and Being a Professional Bird Catcher

My name is Rachel, but you may know me as Glacier-Swiss from my 2015 northbound thru-hike of the Appalachian Trail. I currently live in Costa Rica and work for an international trails focused non-profit. Before I decided to grow roots here in Central America, I spent a few years working seasonal and short-term jobs which has allowed me the unique experience of living and traveling many places. My perspectives have changed since I started writing for the trek in 2016, so I ask you dear reader, to empathize with my human experience. If you like what read here, you can also check out my personal website: www.continuetheadventure.com <3