White Mountain National Forest is a legendary bastion of ruggedness. Appalachian Trail thru-hikers almost unanimously regard the 100-mile section through the Whites as the hardest part of their 2,200-mile trek. But outside of thru-hikers, generations of adventurers have wandered into the Granite State’s high country in search of challenges to test their mettle and earn well-deserved bragging rights. In the nineteenth century, it became fashionable among Boston blue bloods to prove their manliness by summiting Mount Washington. In the years leading up to the first World War, the Harvard football team liked to send its players to the Whites so that the rocky, precipitous terrain and unforgiving weather might toughen them up during preseason. In 1957, the Appalachian Mountain Club (AMC) began recognizing hikers who summited all of the region’s 48 peaks above 4,000 feet.

Over time, the outdoor community upped the ante by challenging hikers to summit all those peaks between the winter solstice and the vernal equinox, and then upped it further still by challenging people to summit every peak during every month of the year (known among New Hampshire outdoorsmen as “Gridding”). And then one day in the early 1990’s, a man named Jon Burroughs, who had a habit of striking through the names of every trail he had hiked in his copy of the AMC’s White Mountain Guide with a red pen, found he had no more to cross off. Thus “red-lining,” arguably the greatest New Hampshire hiking challenge of all, was born. 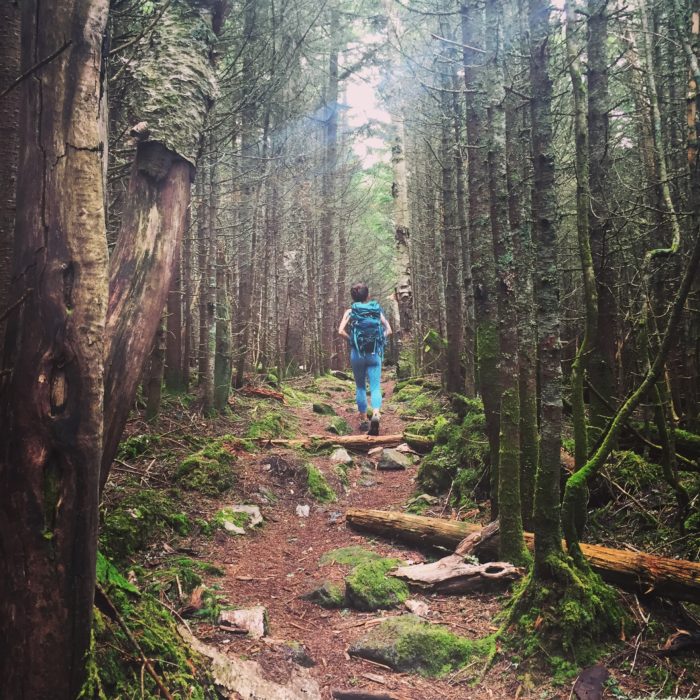 Although red-lining has been a “thing” for nearly three decades, it is a seldom-accomplished feat. At present, less than 50 people are verified as having done it. Given the shear popularity of hiking in my home state, this seemed to me a shockingly low number. But make no mistake—red-lining is not easy. In order to qualify, a hiker must walk the complete length of every single trail listed in a specific edition of the White Mountain Guide. Any edition may be used, though many seem to prefer the most recent to avoid encountering closed trails or missing out on new ones. There are over 1,400 miles of trail listed in the White Mountain Guide and red-liners can expect to log anywhere between 3,000 and 4,000 miles over the course of their pursuit. While navigation skills rarely factor into bagging the 4,000-footers, red-lining takes hikers into remote areas where few have tread, and people taking on this challenge must count on their skills with a map and compass. It also requires a tremendous time commitment, a willingness to drive long distances, and the courage to hike where few others have been.

Who breathes this rarefied mountain air? 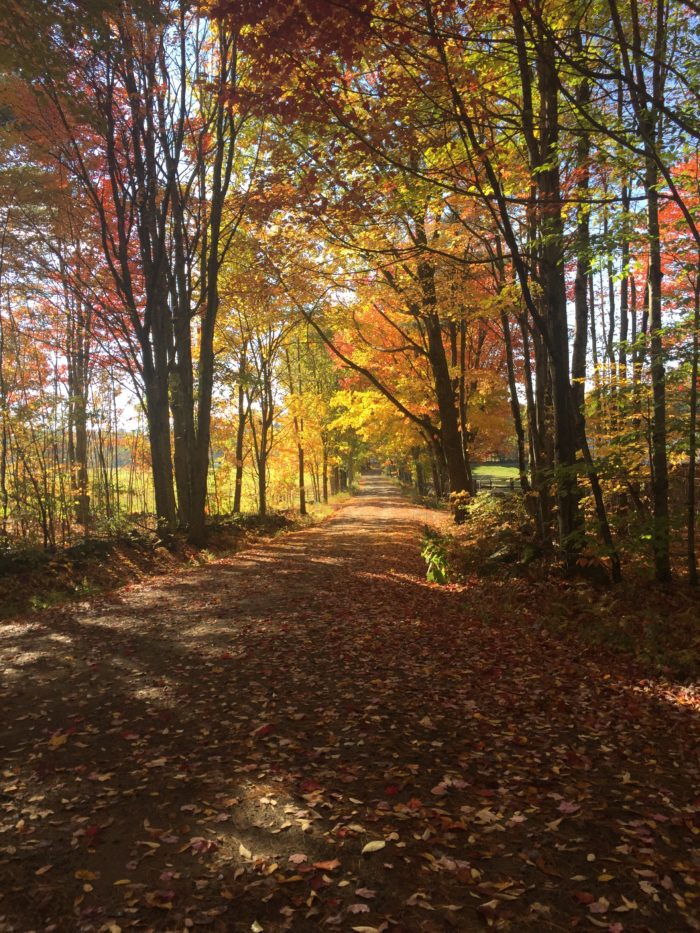 I got a sense of the kind of person who conquers a challenge so daunting one Tuesday afternoon in January when I travelled to the public library in Laconia to sit down and chat with Beth Zimmer, a middle school guidance counselor who, this fall, became the 43rd person to finish red-lining. When we corresponded via email prior to our meeting, she said that she was neither the first nor fastest person to have red-lined, and was therefore curious where I saw this article going. I mistook for self consciousness what was simply humility, for as soon as we shook hands I was struck by her air of calm self assuredness. She was instantly recognizable as a person who has spent her life being a total badass, and now possesses coolness and authority so self evident that she can downplay them all she likes. Although her petite stature, steady voice, and kind demeanor are qualities that should normally put a person at ease, I found myself slightly intimidated and a little tongue tied. Lucky for me, Beth was more than capable of carrying the conversation. 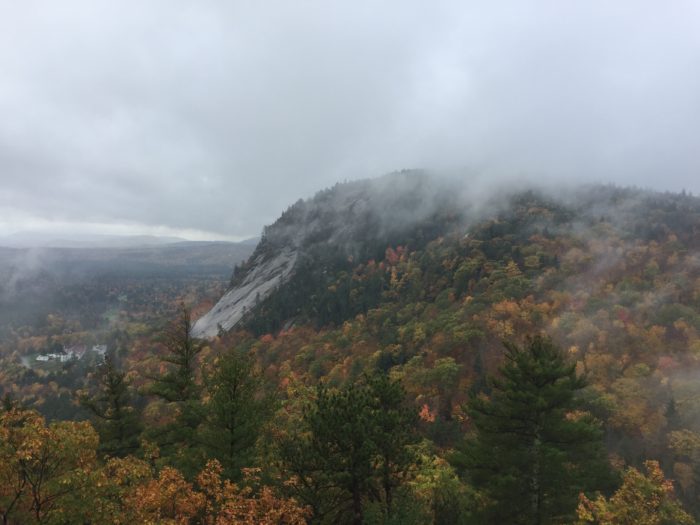 Beth characterized her path to red-lining as gradual, meandering, and deliberate only towards the end. A native of Massachusetts, she moved to New Hampshire in the mid-1980’s after living abroad. Though a lifelong lover of the outdoors, she favored the more action-packed sport of white-water kayaking when she was younger, and didn’t get into hiking until she was in her thirties. Over the years she summited all the 4,000 footers and helped her husband and friends knock peaks off their lists too. She became a trip leader for the AMC and led hikes throughout the White Mountains. When she first heard about red-lining several years ago, she learned there was a downloadable spreadsheet that allowed people to see how many of the trails they had already done. After decades of peak bagging, leading excursions, and exploring forgotten places, she figured she would at least have covered a majority, and was surprised to learn that she had actually only seen about 40% of the trails that the White Mountains have to offer. She likes to be realistic, and given the vast commitment of time, the difficulty and danger of certain trails, and the fact the she is “not 24 anymore,” she thought the prospect of bringing her percentage all the way to 100 was most likely out of reach.

Road to becoming a Red-Liner 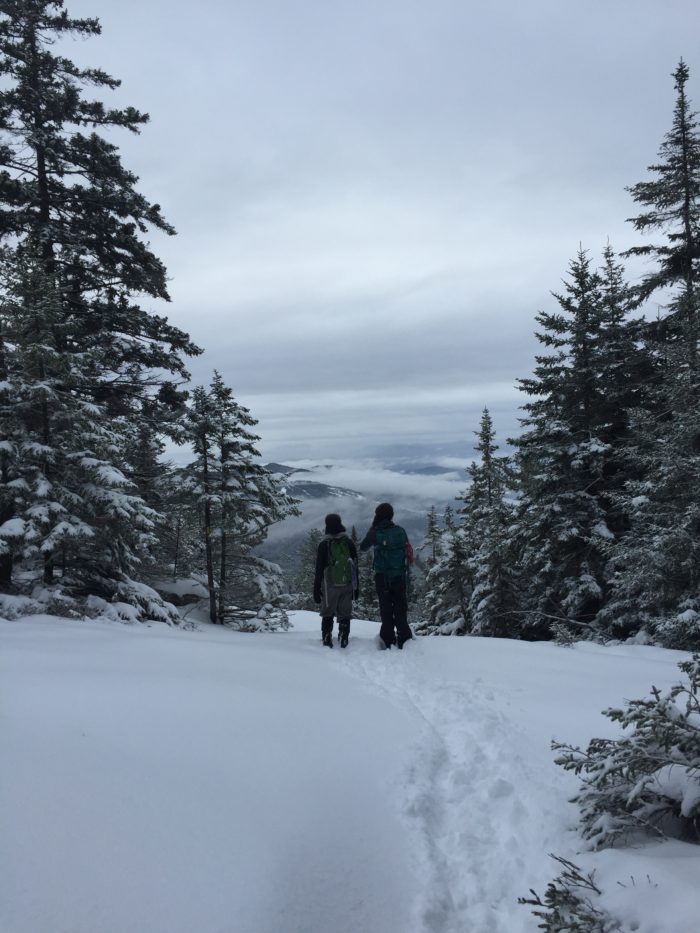 Nevertheless, she kept red-lining in the back of her mind and crossing off new trails became a priority among her usual backcountry pursuits. If she led a trip for the AMC that permitted easy access to a trail she had yet to hike, she hiked it. If friends were headed to a trail she had never been to before, she joined them. Sometimes she explored new places with her dog, sometimes with her husband, sometimes by herself. She started to take on more challenging trails, building confidence in both her strength and technical skills.

When she initially doubted her ability to red-line, Mount Washington’s notorious Huntington Ravine trail had come to mind. She eventually enlisted a friend who shared her steady approach to hiking difficult trails, and they made the trek without incident. She joined a Facebook group for aspiring red-liners to find helpful information, inspiration, and encouragement.

Out of curiosity, Beth returned to her spreadsheet and it showed that in just a few short years she had brought her original 40% to about 85%. “That’s when I knew I had it,” she says. There was no turning back. 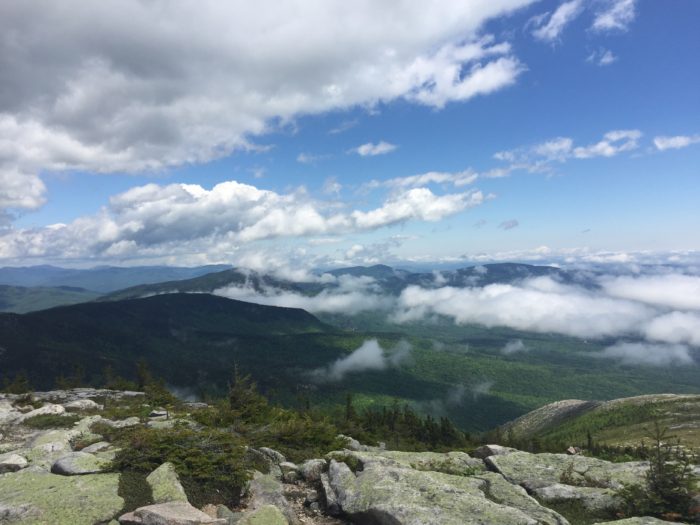 Beth may describe her completion of the 29th edition of the White Mountain Guide as something that, for the most part, she did pretty casually. Still though, it had to require significant determination, especially considering that not all trails reward hikers with a waterfall or spectacular views. Beth admitted she would be lying if she claimed that the pursuit of a goal—the thrill of the chase, if you will—held no appeal for her when it came to red-lining. Still, it was clear from listening to her talk that she genuinely loves hiking and the outdoors to the very bottom of her soul. When I asked what her favorite thing about red-lining was, she rhapsodized about boreal forests, alpine meadows, tiny flowers, moss that hangs from tree branches, scrubby pines, and granite slabs and boulders, intricate and beautiful and unique. Being in new places helped her see all of these things more vividly. “When I drive down my road, I pass the same stone wall, the same field, the same cows, and I don’t really see them,” she explained. Seeing something for the first time eliminates the tunnel vision that can accompany something too familiar. The novelty, she said, is what she misses most.

The next mountain(s) to climb 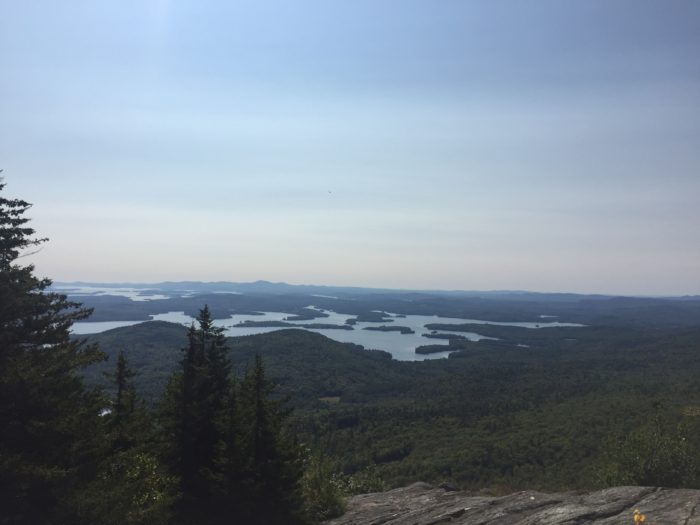 I asked Beth if she planned to revisit any of the places that she discovered through red-lining, to which she answered “of course.” Unsurprisingly, though, she is more eager to move on to new adventures. In the future, she plans to help guide AMC adventure trips outside the White Mountains, both in the US and abroad. She also wants to get back to exploring even more remote places that will challenge her well-honed map and compass skills. When I asked what was next, she rattled off about a half dozen places before saying “we’ll see, you only get so much time to do everything.”

So what does it take to red-line all of White Mountain National Forest? After talking to a red-liner, I gather it is a potent combination of physicality, drive, backcountry skill, courage and confidence, a thirst for adventure, and a deep love and appreciation for all of the beautiful gifts that the Whites have to bestow.

According to Beth, the advent of social media and the explosion in hiking’s popularity in general have to conspired to create a red-lining boom. A lot of people are now attempting to earn the coveted title (the Facebook group “White Mountains Red-lining” has over 800 members).

“Are we about to see the number of finishers get a lot bigger because of that?” I asked. Time will tell. 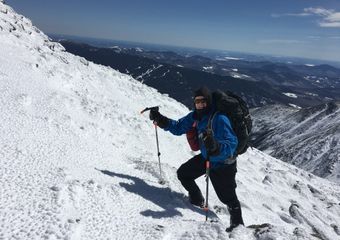 576 Summits: Gridding New Hampshire's 4,000-FootersNew Hampshire's White Mountains are home some of the most challenging and beautiful trails in the country. The trails are often little more than eroded rockslides, navigated by boulder hopping and lowering one's self off beleaguered tree trunks. And that's just in summer. Thanks…Read More