I had never heard of the company until my first long hike (Colorado Trail, 2015), but in 2018, for the first time, Altra surpassed Salomon to become the most popular brand of trail runners in The Trek’s annual Appalachian Trail surveys. More than twice as many chose Altra than the next highest brand, Salomon. Just two years earlier, respondents preferred Salomon two-to-one over Altra. 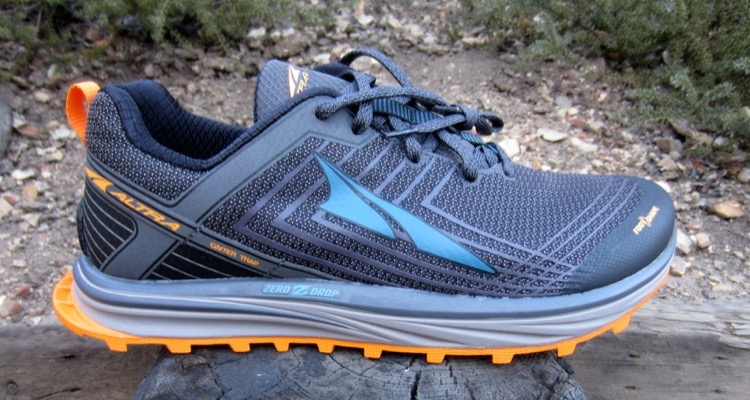 When Altra was bought in 2018 by outdoor-equipment behemoth VF Corporation (The North Face, Timberland, Smartwool, and many other brands), some fans worried what would become of their favorite shoes. So far, VF’s approach seems to be adding a slew of new models and continuing to update old standbys, while not tinkering too much with the shoes’ most salient features: A foot-shaped toe box and zero-drop platform.

The most popular model to date among thru-hikers, by a wide margin, is the Lone Peak, currently in its seventh iteration (version 4.0). First introduced in 2017, the Timp is a trail shoe that falls between the Lone Peak and the Hoka-style Olympus (now in version 3.5) in terms of cushioning. The second-generation Timp 1.5 features softer cushioning, a more flexible midsole, and a new upper intended to improve flexibility. 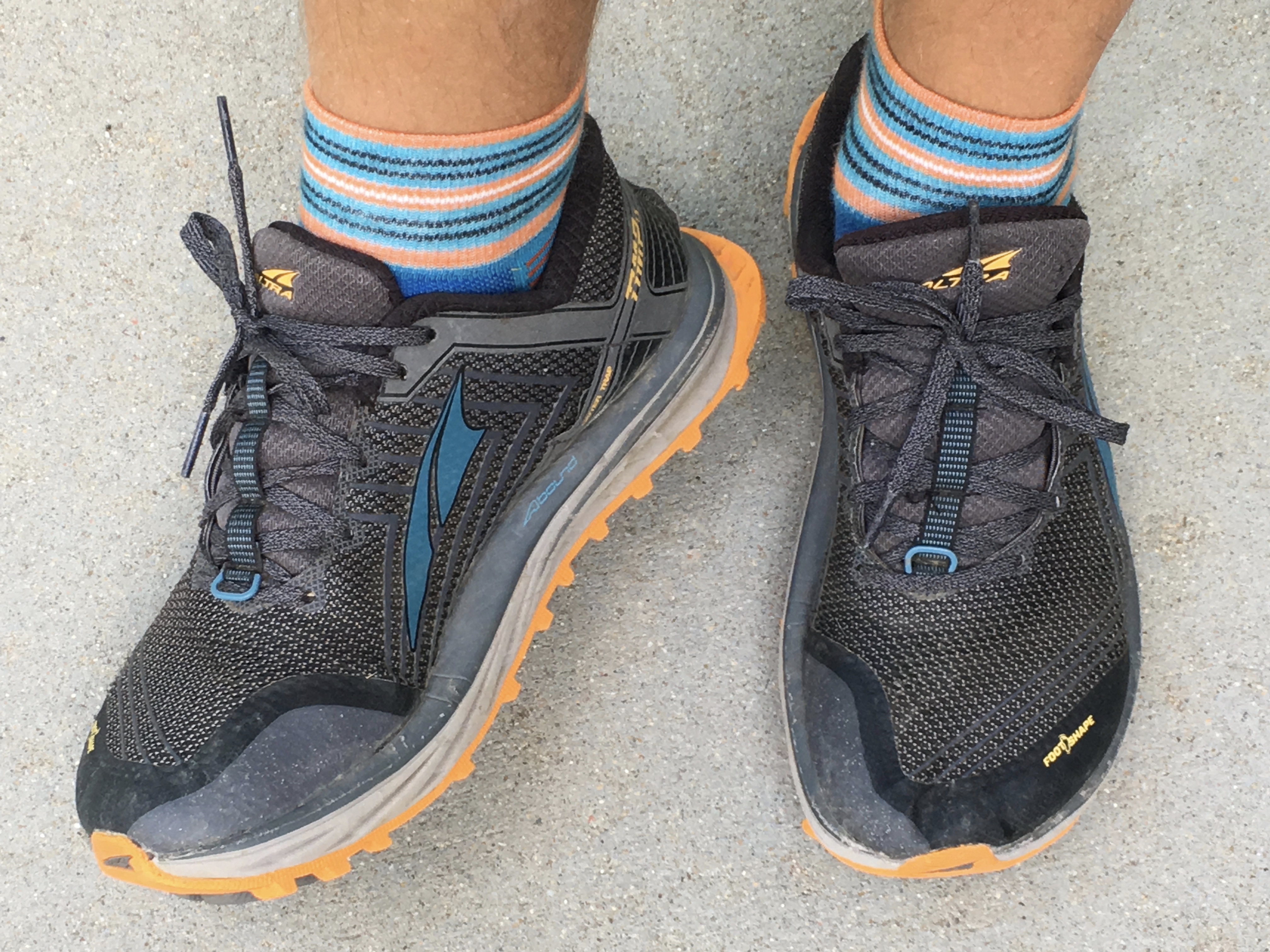 Zero-drop platform: The heels on most traditional running shoes are elevated between four and 12 mm above the forefoot. Taking a cue from the barefoot craze of a few years back, all Altras are zero drop—heel and toe on the same level, regardless of cushioning. The intention, in part, is to reduce the incidence of heel striking and altering stride so that feet strike beneath the hips, rather than in front. Runners or hikers who have not used zero-drop shoes should ease into them, as even a few millimeters of difference can cause calf or Achilles strain without acclimation.

Foot-shaped toe box: Altra gets credit for popularizing this concept, widely cited by long-distance hikers as the reason the shoes feel so comfortable. Skeletal structures in the feet tend to spread out over the course of five million steps (the estimate to complete the Appalachian Trail), in my case, permanently. Altras are designed with that in mind, versus traditional shoes with a narrowing at the toe. Though once ridiculed as “clown shoes,” Altras have become so popular among hikers that I haven’t heard a smart remark like that in years.

Gaiter traps: This detail that has endeared Altra to thru-hikers: Each pair features a bit of Velcro on the heel where thru-hiker favorite Dirty Girl or similar gaiters can be snugly attached, and some models (including the new Timp) feature places to attach gaiters on the side. Up front, there is a sturdy D-ring to secure gaiters. All this prevents gaiters from riding up and becoming useless. 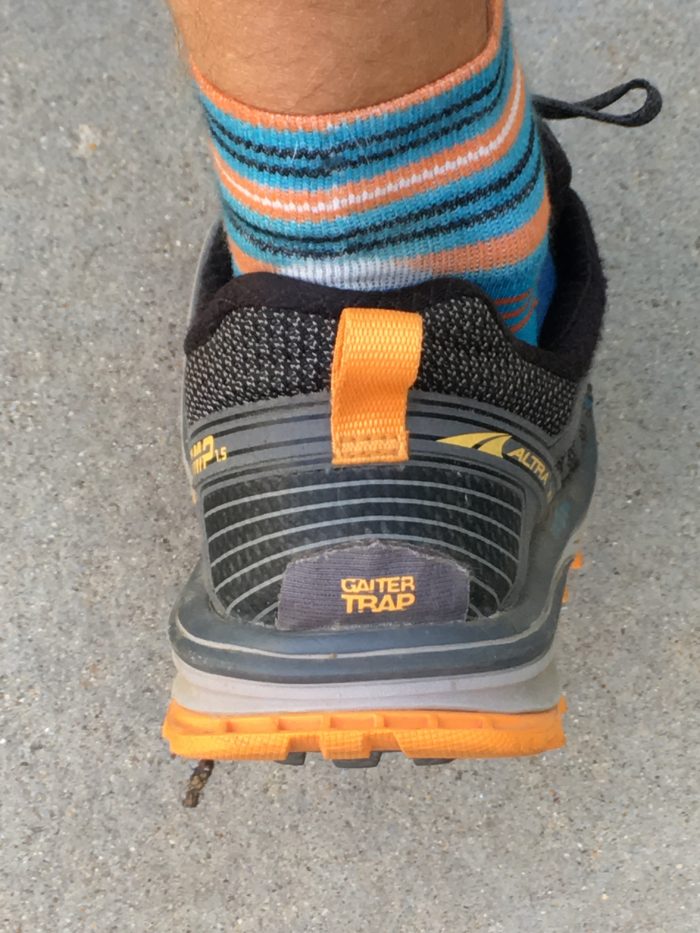 Altra has been out front on small, but important, details, like their patented gaiter trap.

Beefy outsole: Designed for mountain running or hiking, the Timp 1.5’s outsole is sturdy and grippy without being uncomfortably knobby. Lugs are set at a heel-facing angle from toe to midsole, and a toe-facing angle from heel to midsole, which give them plenty of traction for pushoff, even in mud, wet sand, or snow. 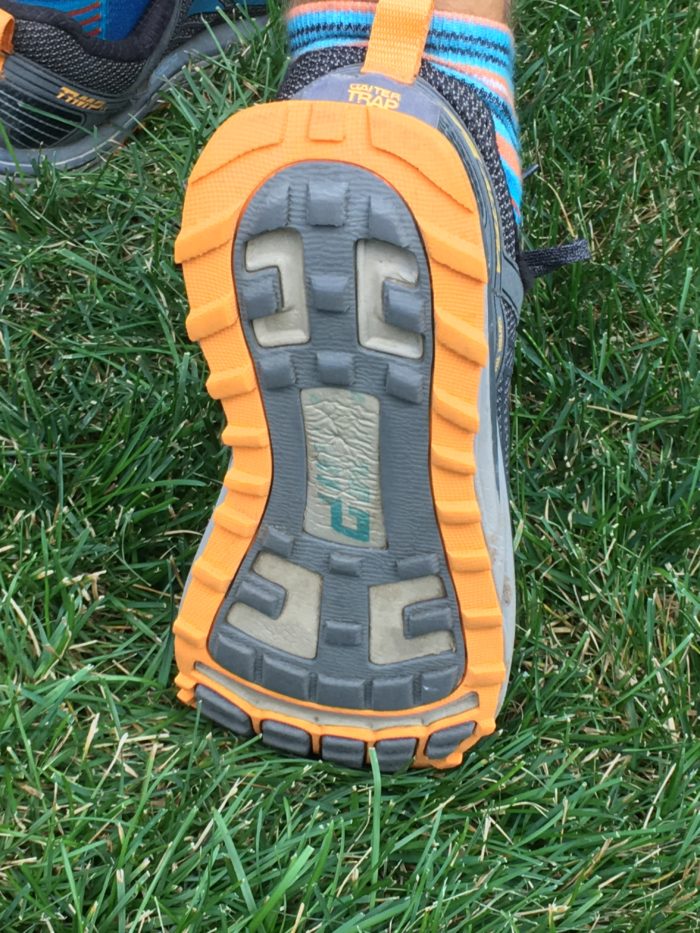 Reinforced toe cap: Intended to protect both toes and upper material, the Altra cap is a welcome feature for anyone who knows how easy it is to toe-jam a rock at the end of a long day, when legs are quivering with exhaustion. The toe cap hasn’t always lived up to its promise, due to the difficulty of attaching a piece of hard rubber to a curved surface, but with the Timp 1.5, Altra seems to have found the right formula. 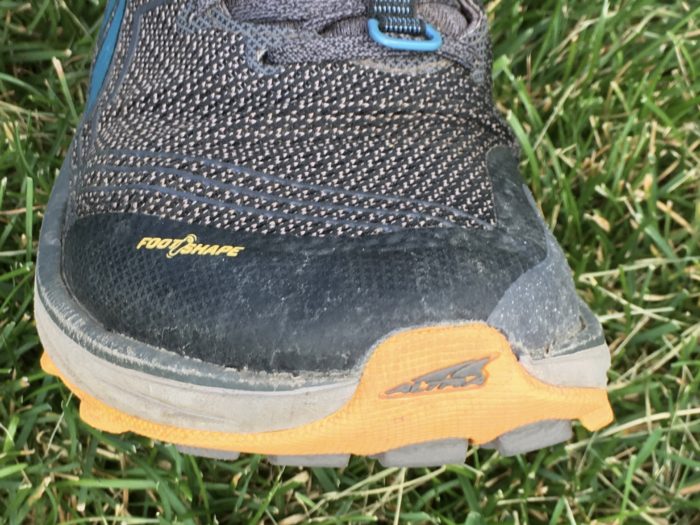 Past versions of Altra’s protective toe cap have separated from the shoe, but it’s well secured on the Timp 1.5. 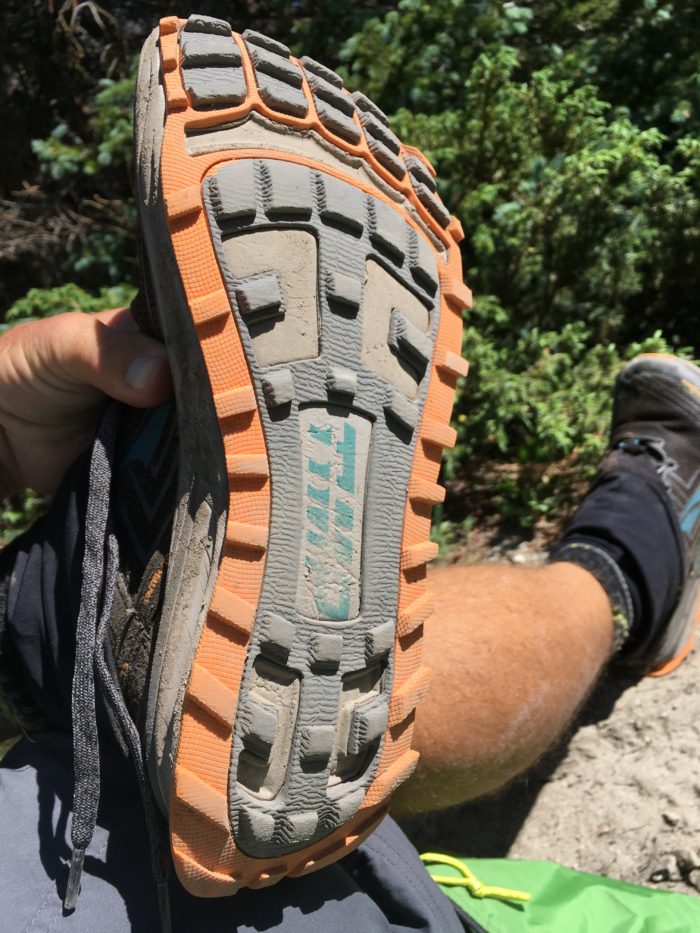 This may be the single biggest change between the Timp 1.5 and 1.0. The first version was so wide, and a tad long, that I needed to order at least a half-size smaller than my usual Altra size; even a full size smaller fit reasonably well, as long as I wasn’t wearing a thick sock. That roominess in the 1.0 was nice, in a way—I called them my bedroom slippers—but even at a half-size smaller, it felt slushy, making the shoe unsuitable for rougher mountain running, climbing and rock hopping; I rarely get blisters, but I did twice in the 1.0. The 1.5 has remedied that by narrowing the toe box and bringing the overall fit more into line with Altra’s other models; I wear my usual Altra size, 8.5 in the Timp 1.5, compared to a 7.5 or eight in version 1.0. 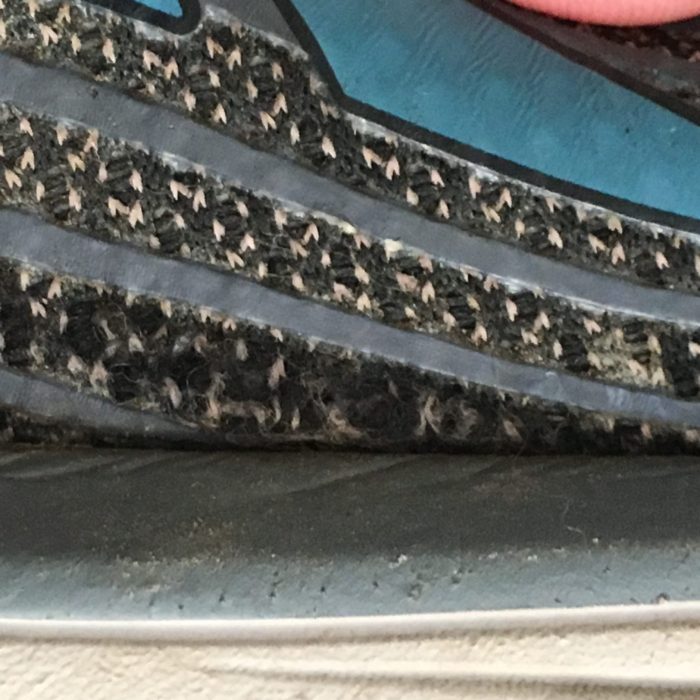 The beginning of a split where the upper meets the sole of the Timp 1.5, after about 250 miles of running and hiking on moderate terrain and one rugged trip up a mountain.

I started the AT in 2016 in Hoka One One Mafate Speeds, and switched them out after a whopping 861 miles only because of my ever-widening feet—my sesamoid bones and the balls of both feet burned painfully at the end of every day. I replaced them with Altra Olympus 2.5s, which instantly halted the pain, and I loved the cushy ride. The bummer was that I burned through four pairs of Altras the remaining 1,300 miles, less than half the miles per pair than I’d gotten out of the Hokas. The outside uppers split where they met the midsole under repeated use in rough terrain—Pennsylvania rocks; roots, boulders and ridiculously steep climbs in New Hampshire and Maine. And the Timp 1.5? By the time I’d run or hiked ~250 miles in moderate terrain and climbed 14,048-foot Mount Lindsey in Colorado, the right shoe had begun to split in the same spot.

That said, I’ve since put another 100 miles or so on the shoes in moderate terrain, and the split hasn’t gotten any worse. That leads me to believe that like the Olympus, the Timp 1.5 isn’t the best choice for grinding granite or ankle-torquing climbs, but that for more typical use it probably holds up as well as most shoes.  The soles on the Timp 1.5 hold up extremely well, and I’m pleased to note that the toe cap shows no sign of separation, unlike virtually every other pair I’ve had (except my beloved LP 2.5s). 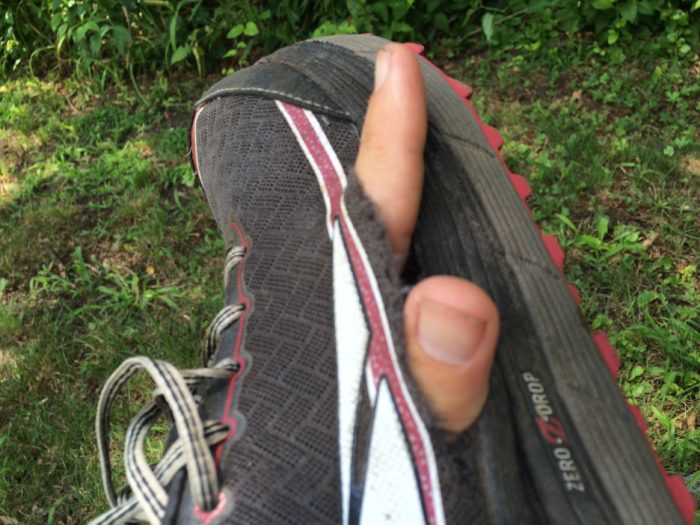 The Altra Olympus tended to split out after 300 miles (sometimes less) on rough Appalachian Trail terrain.

Durability note: I’m still wearing a pair of Lone Peak 2.5s from three or four years ago as street shoes. Even after well over 500 miles of running and uncounted hundreds of walking miles, the mesh uppers are still in perfect shape. It makes me wonder why the company doesn’t revert to that uber-tough, yet comfy and breathable, old-school mesh. 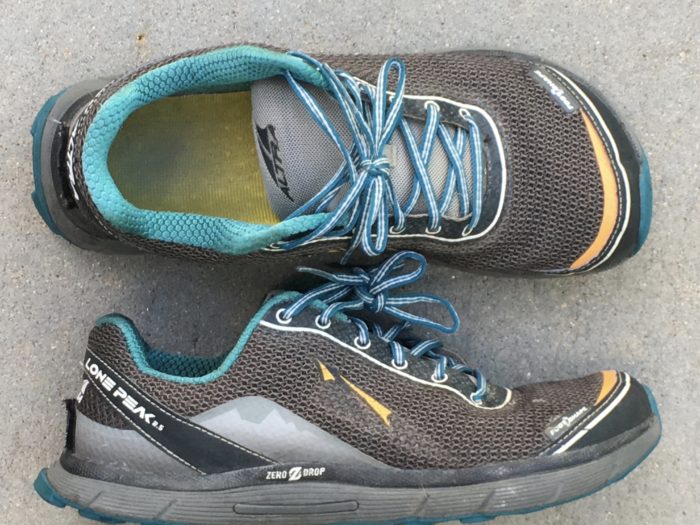 What happened to this ultra-durable material, used by Altra on its Lone Peak 2.5, circa 2015?

This, for me, is the greatest selling point for all the Altra models I’ve worn. They feel great on my wide, short, high-arched feet. The uppers are less restrictive and breathe better than any other brand I’ve worn over the years, from Hoka to Saucony to Asics. The Timp 1.5 is no different, though the fit is a little more snug up front. 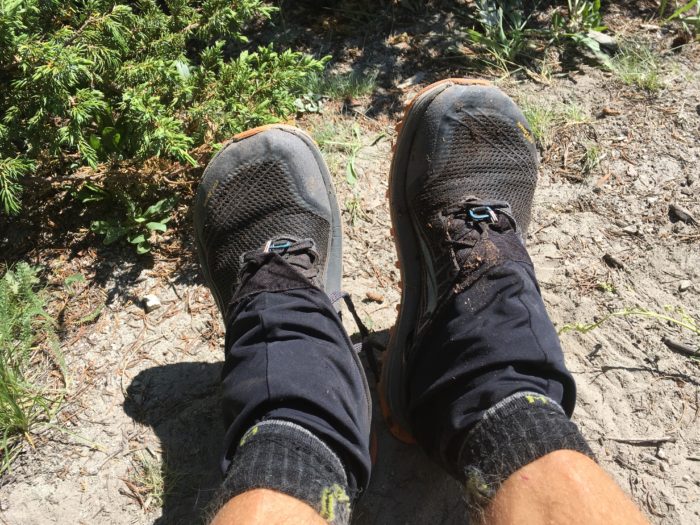 Roomy and comfy for anyone with a wider foot. Exceedingly breathable, the Timp 1.5 dries out fairly quickly after getting wet (unless you’re on the AT, where pretty much nothing dries quickly). Solid, durable sole that grips well, a firmly seated protective toe cap. Well thought-out perks like gaiter traps and attachments. Theoretically, zero-drop shoes should help develop a more natural gait. Nicely supportive—yet not restrictive—uppers.

Durability of the uppers appears to be an issue, especially in rough, steep, rocky terrain. The Timp 1.5 definitely doesn’t fit like its predecessor and some may miss the luxurious roominess of the 1.0. 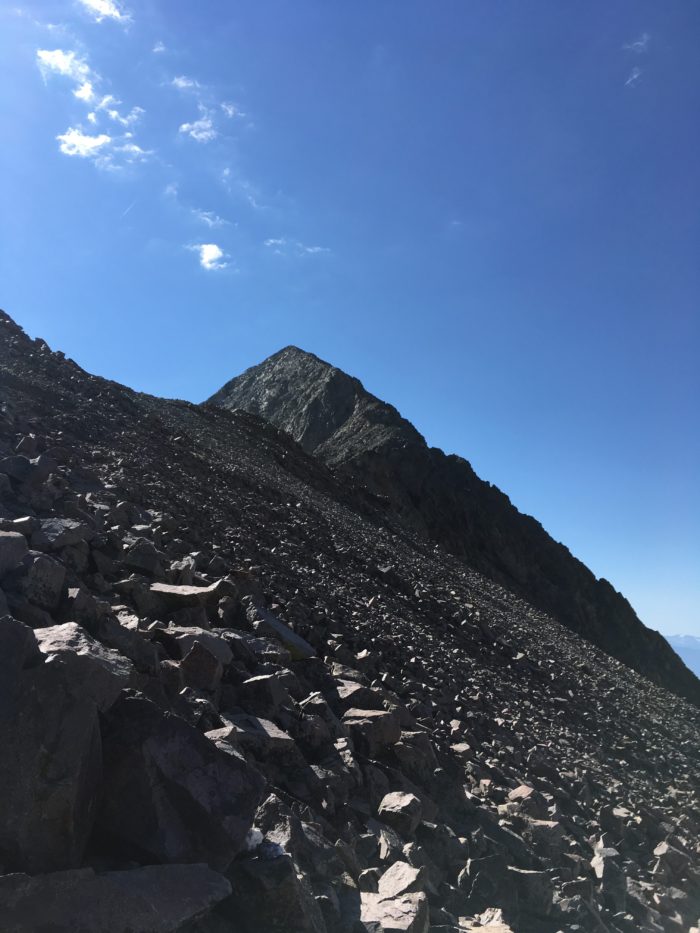 14,048-foot Mount Lindsey, Colorado. In terrain like this, the Timp 1.5 may not be the best choice. Clay Bonnyman Evans photo.

I’ll put it this way: I’ve seldom worn anything but Altras for running or hiking since first donning them during my 2016 AT hike (exception: a pair of La Sportivas for mountain climbing), and I plan to continue. I have a soft spot for the Olympus, but the stack height makes people with bendy ankles nervous (not an issue for me; knock on wood). And while thru-hikers love the Lone Peak—worn by half of Altra-wearing 2018 Trek survey respondents, compared to 11 percent for the Superior and eight percent the Olympus—the shoe offers less cushioning. The Timp 1.5 neatly splits the difference on cushion, nice if you’re going to be slogging over sharp rocks and roots for thousands of miles. I wish the uppers were more durable, but that’s probably the price to be paid for the admirable comfort. In sum, the Timp 1.5 is now my go-to unless I’m hiking or running in very rugged conditions.

This item was donated for purpose of review.