Gear Review: Counter Assault Bear Deterrent: How it Works, How to Use It

I have a pretty good idea how to review a book:

But I confess that when the good folk at Kalispell, Montana-based Counter Assault proposed that I review their bear-deterrent spray, I had a hard time imagining exactly how to go about it. I suppose the best way would be something like this: 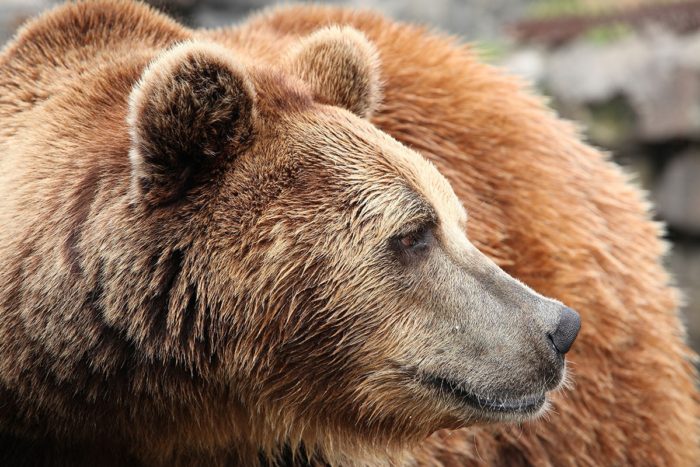 But when the product arrived, I saw the company had helpfully forestalled the need to find and irritate an actual bear by sending along a “practice” canister, which does not contain the real stuff, but which, in case you were wondering, you should not fire off in your house anyway.

The actual product, according to Counter Assault, registers a whopping 3 million on the famous Scoville Heat Unit scale. For comparison, plain old pepper spray—the kind you use to fend off solicitors—is a dinky 1 million SHU, and ghost peppers, the hottest thing humans actually eat, top out at a wimpy 300,000 SHU. 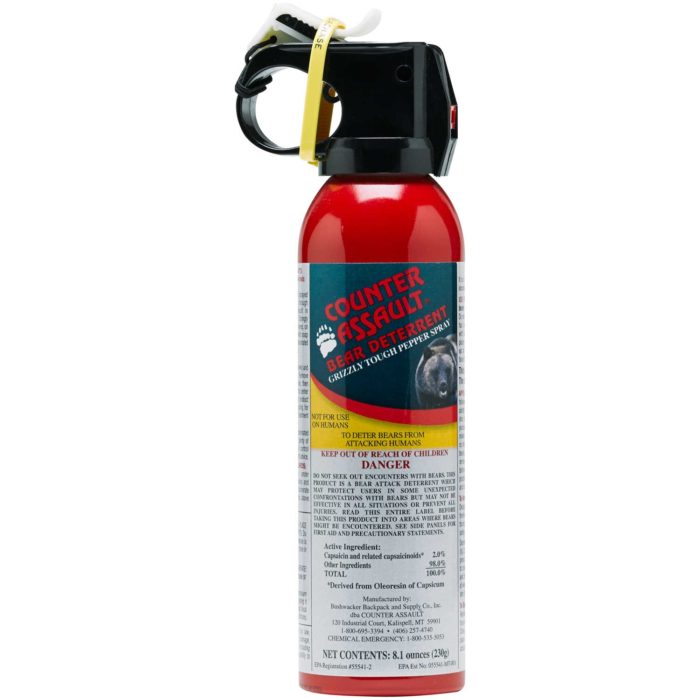 What It’s For (and Not For)

To get the best possible understanding of this product, its uses, and some of the science behind it, I called up Gary Moses, a product ambassador and bear-education specialist for Counter Assault.

Moses spent nearly 30 years working for the National Park Service in Glacier and Yellowstone, two popular parks with the most densely populated brown-bear (aka grizzly-bear) habitats. In 2008 he received the prestigious Harry Yount National Park Ranger Award, given annually to a single ranger who exemplifies the skills needed to protect resources and serve visitors. He is believed to have treated more bear-attack victims and investigated more bear attacks than anyone else in the continental US.

The product, Moses says, is intended for one, and only one, use: To lay down a “wall” of deterrent between you and an attacking bear.

“It is not repellent. Do not spray it on yourself or your children,” he says. “As a ranger, I’ve seen visitors spray their tent. It’s only to be used to spray in the face of an animal that is trying to cause harm.”

He is careful to say “animal,” because 3 million SCUs are enough make virtually any animal stop and think twice. Lion, dog, bear. And if (when?) some mad scientist resurrects a T-rex by extracting its blood from the DNA of a 67-million-year-old mosquito trapped in amber? Who knows? 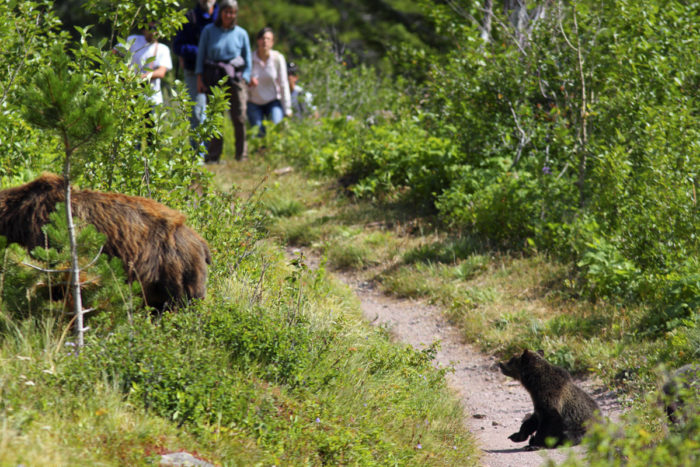 What do you call people who get this close to a grizzly bear mama with a cub? Lunch, maybe? Courtesy counterassault.com

He emphasizes that this is not “pepper spray,” a much-weaker (though still potent) product intended to deter humans. It typically comes in a small can and can be sprayed a maximum of six to 10 feet, he says.

This bear spray is not intended to be “aimed” at, say, the face of a charging bruin (or velociraptor), but rather to lay down what Moses calls a “hedgerow” as far as 40 feet in front of you, a bearier (sorry) into which your sharp-toothed assailant will charge until his eyes, nostrils, and tongue suddenly feel as if they’ve been set on fire.

A can of bear spray won’t do you much good stowed in your pack, or even a rear pocket, Moses says. Bears generally won’t park it while you hold up a hand, shrug off your pack, and rummage around for your spray.

“Always carry it attached to you or the exterior of your pack, where you can reach it,” he says. “A bear attack usually happens in a quick couple of seconds.”

In addition, Moses stresses the need for practice, which is why Counter Assault provides practice canisters. 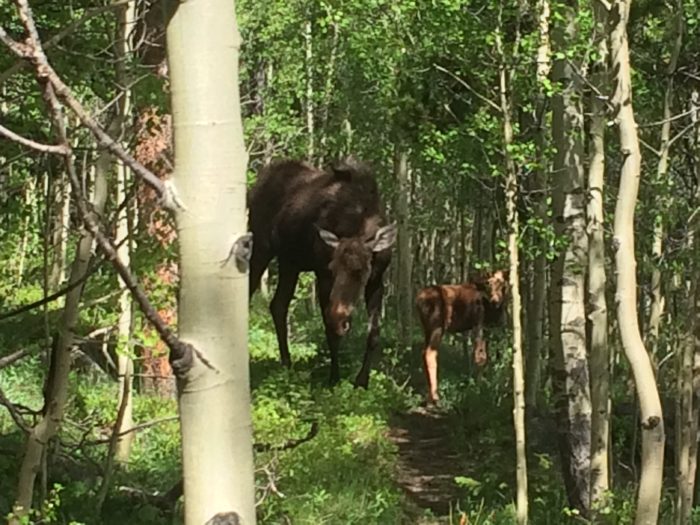 What do you call runners who get too close to a mama moose with a calf, like this one near Nederland, Colorado? Strawberry jam? Counter Assault bear spray also deters other large, (understandably) angry creatures, such as moose and (possibly) velociraptors. Clay Bonnyman Evans photo.

As far as effectiveness of bear spray in general, Moses points to a 2011 study, “Efficacy of Firearms for Bear Deterrence in Alaska,” published in the Journal of Wildlife Management, which found that spray is more effective than trying to fend off an attack with a firearm.

In an analysis of “incidents of bear-human conflict” involving 444 people and 367 bears (84 percent brown bears, 10 percent black bears, 2 percent polar bears, and 4 percent of unknown species), Tom Smith of Brigham Young University and three other researchers found that when a firearm was used, human injuries occurred in 56 percent of attacks, including 17 fatalities (and 25 dead bears).

Meanwhile, in a separate study of 72 bear attacks between 1985 and 2006, Smith found that, “Of all persons carrying sprays, 98% were uninjured by bears in close-range encounters. All bear-inflicted injuries associated with defensive spraying involved brown bears and were relatively minor.” And not a single bear was injured or killed.

Use a gun on a charging bear, and your chances are about 50/50 of getting hurt or killed. Use bear spray, and that drops to less than 50/1. 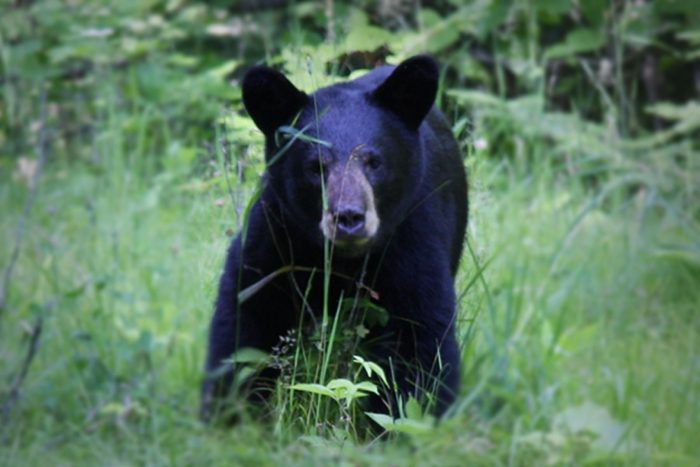 Moses notes that bear attacks have steadily declined in Glacier, from 2 to 3 people injured every summer in the early 1990s to an average of fewer than 0.5 per year in recent years. He can’t prove it with data, but believes the use of bear spray is a big factor in the change.

“Bears learn a negative experience with people. They are matriarchal; mom teaches her cubs everything. So the more spray is used in close encounters, the more bears learn to stay away, and they pass that along to the next generation,” he says. “If a bear is shot and killed, the learning ends if it dies.”

Moses says far too many backcountry users endanger themselves and bears with sloppy food storage. A bear hang is all but useless unless it is six to eight feet from the tree trunk and at least 10 feet off the ground.

But overall, he says, “bearanoia” is overblown when compared to the actual risk of bear attack. Research for a 2019 Trek story found that there had been no fatal bear attacks on any of the Triple Crown trails–ever.

Still, he points out that carrying bear spray, especially in grizzly country, may save you in the extremely unlikely event of a bear attack.

“It’s like putting on your seat belt,” he says. 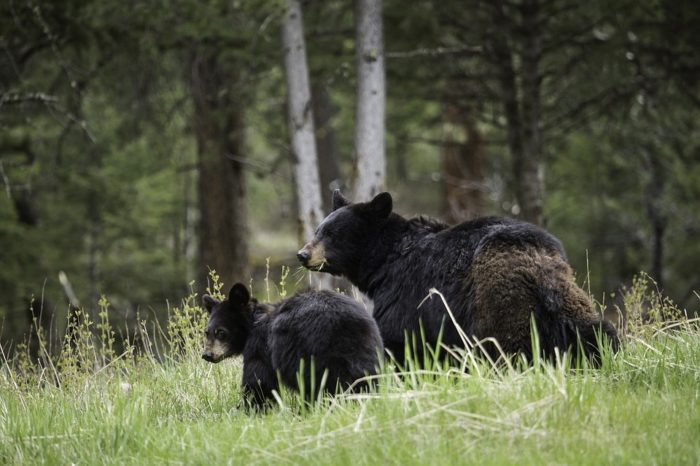 It was time to use the test canister.

I pulled the safety wedge from the handle and, grimacing like The Man With No Name from Clint Eastwood’s spaghetti Westerns, whipped it from my hip and gave one quick pull on the trigger. Alas, for reasons that I cannot adequately explain to you, dear reader (not to mention my wife and dog), I did this in my home office.

“Yipe!” Carmen shrieked at the sudden hiss and splat as the stream hit the back of my closet, leaping from the bed and skittering down the stairs like Scooby Doo.

“What did you do to her?” my wife barked from down the hall. “And what’s that smell?”

It may not have been the hellfire unleashed by pulling the trigger on a live can of Counter Assault, but it was still a pretty potent chemical blast. Of course, you are smarter than I, so I’m sure you won’t “try it just a little bit” inside the house.

Take two: I went out into an open field near our house and, as instructed, aimed it well in front of me, and with one hand, popped the safety wedge, aimed at the ground, and let it rip for a couple of seconds. Then I did it again and again and again, until it was empty. I confess I felt a little deflated, sort of like when you had fired off the last of your bottle rockets when you were a kid, but it was super easy to use and fired a good 30 feet (the practice canister has a range of 32 feet).

Easy to use: Very intuitive, safe, and requiring only one hand.

Range: Being able to build your bear wall 30 to 40 feet in front of you is comforting. You don’t want to let a bear get close to you, for many obvious reasons. For one thing, they kind of smell. I scooped up a tangle of bear hair just before Blood Mountain on the Appalachian Trail in 2016 and it was … pungent.

(Aside: Speaking of bear walls, I met a guy on the AT whose first trail name was Darkness. One day, as he and his trail family were crossing Watauga Dam in Tennessee–notorious for its bear activity, the ATC finally tore down the local shelter in 2019 after years of terrifying encounters–a mama bear and her cub were coming the other way. Mama charged, and his whole trail family turned and fled, screaming, precisely what you are not supposed to do. But he had the presence of mind to stop, raise his trekking poles, and shout. Mama pulled up short, wanting no part of this guy, turned around, and ran off. After that, Darkness became Bearwall, one of the best trail names I’ve ever heard.)

Deterrent power: I’ve eaten ghost peppers, and if this stuff is 10 times fierier, I believe it works; see study above. Also, having 8 or 9 seconds of spray time is a big plus.

Weight: For thru-hikers, even the smaller canister may seem like extra weight at 8.1 ounces.

Cost: For a product you may never use, this may feel like a burden on a stretched hiker budget.

Stupid people (admittedly not product’s fault): So I heard this one guy fired the practice canister in his house … what an idiot!

I’m adamantly non-bearanoid, being familiar with the statistics. That said, if you are heading into grizzly country, this is probably a pretty good reason to put an extra 8 or 10 ounces on your back, because you never know. It’s incredibly easy to use and designed well to prevent accidental release.