MSR’s Lightning Ascent snowshoes have been helping hikers navigate four-season conditions for years. Weighing in around four pounds, the Ascents are widely considered among the lightest and grippiest offerings on the market. The weight savings, aggressive multi-directional traction, and much-professed comfort of the Ascents hold a lot of appeal for long-distance hikers contemplating the possibility of deep snow. If you have to lug several pounds of traction and flotation along with you, you might as well make sure they’re the slickest, comfiest, most functional pounds you can get, right? As a true all-terrain snowshoe, I hoped the Ascents would keep my pack and me afloat (and firmly affixed to the slope) over miles of rugged and variable terrain. 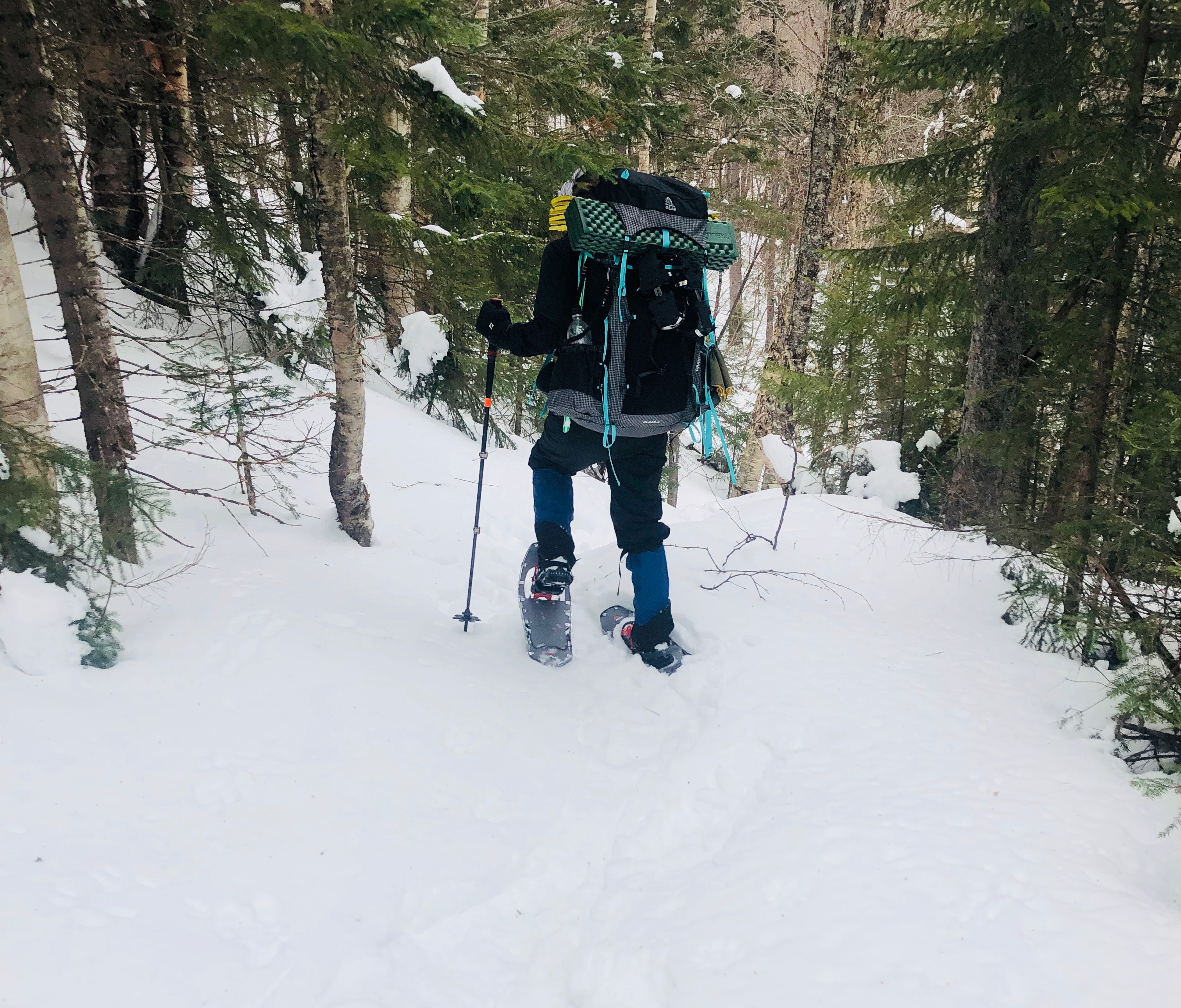 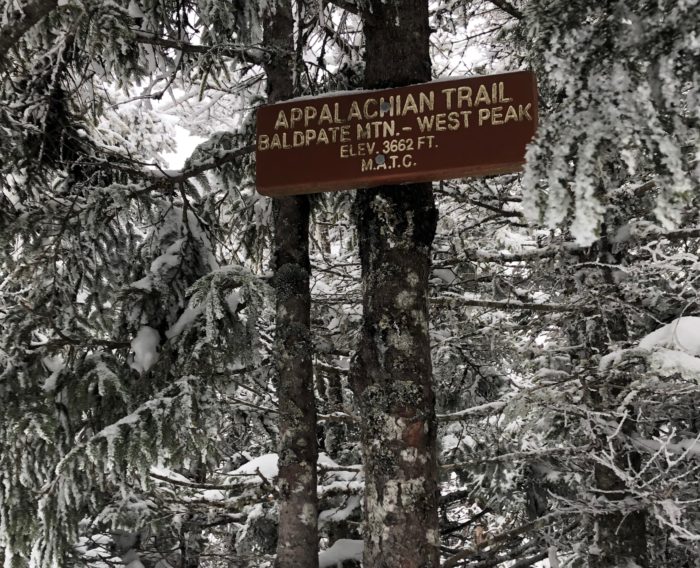 I used the Lightning™ Ascents to break trail in two to four feet of icy snow in Maine (Appalachian Trail near Grafton Notch). This was a multiday backcountry trip during which I sometimes carried the snowshoes strapped to my pack when not in use. Temperatures ranged from single digits to mid-20s Fahrenheit. I used the snowshoes to ascend and descend moderately steep slopes of up to about a 25% grade. 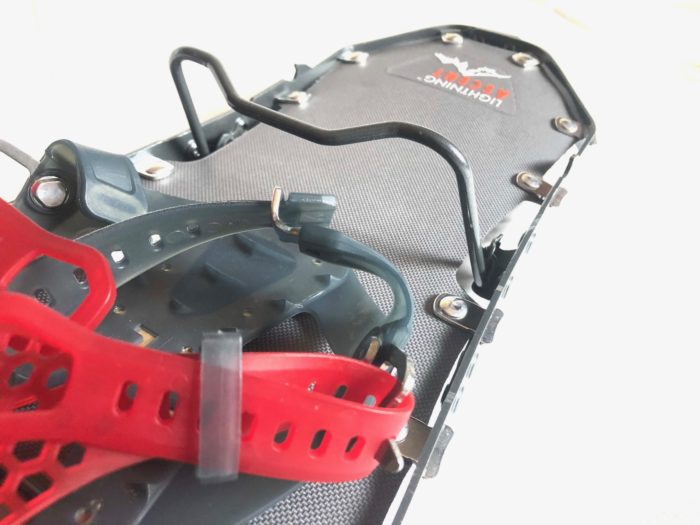 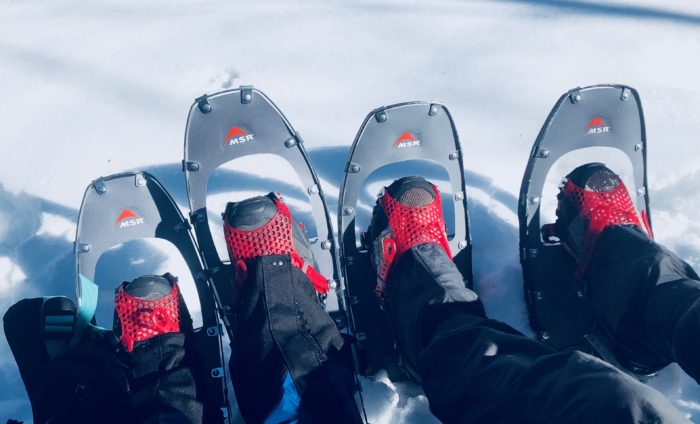 The Paragon™ binding system on these snowshoes is tough to rate, as it has both pros and cons. On the plus side, it effectively distributes weight over the whole foot, which is particularly important on rugged terrain when you want to be strapped in as tightly as possible while remaining comfortable. The attachment system is also pretty simple, and there are generally fewer ways that simple things can fail. These bindings continue to do their job even when temperatures are well below freezing and the straps are covered in snow and ice. Mercifully for me, I didn’t get a chance to test them down to their stated freeze limit of -18˚F.

The nylon decking on these snowshoes appears unsettlingly flimsy at first glance but is actually rock solid. I had some eek moments while navigating over sharp rocks and sticks with these on, but despite some pretty aggressive pokes, the decking held strong and appears no worse for the wear.

While we’re talking about durability, here’s a side note on caring for your snowshoes: the frames on the Lightning™ Ascents are made of aluminum, a huge plus as it’s lightweight and won’t rust. The crampons, however, are made of steel. No need to begrudge the added weight of steel in this instance—crampons ought to be beefy, considering their purpose—but you should be careful to dry them off before storing the snowshoes since wet steel will rust.

As a thru-hiker, it’s hard to consider any piece of gear that weighs over four pounds “lightweight,” but compared to most other comparable snowshoes, they really and truly are. It’s said that a pound on the feet is worth five pounds on your back in terms of energy expenditure, so it’s well worth shelling out to save weight in this department. If you’ll be on mixed terrain where it may sometimes be necessary to carry, rather than wear, your snowshoes, it’s doubly helpful to have a set that’s on the lighter side. 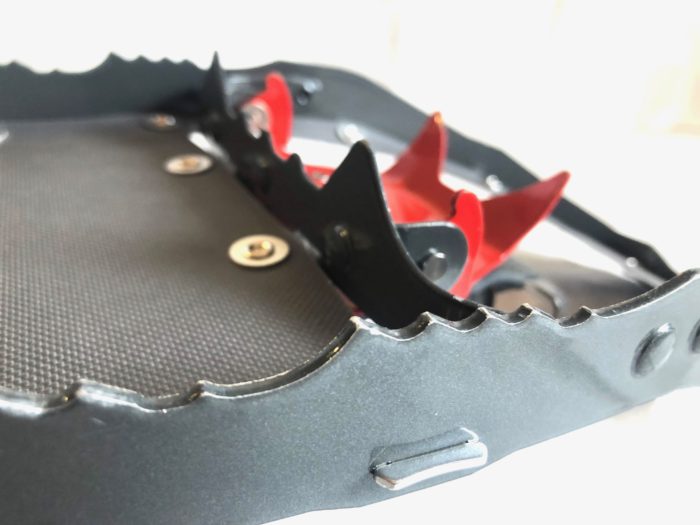 I was able to get up and down fairly steep sections of ice and slick snow with no trouble in the Ascents. The sizable front points dig in well, while the serrated frame and crossmembers provide additional grip and keep you firmly on your feet no matter how you’re oriented to the slope. I’ve heard stories of people using these successfully on very steep gradients, but I didn’t personally have a chance to test them beyond a 25%-ish grade.

I got the 22-inch version, which is rated up to 180 pounds. With my heavy winter pack, I pushed these right to their limit and had no trouble staying (mostly) on top of the snow. My partner also had the 22-inchers, and he blew right past the weight limit to 195 pounds, but even when taking the lead on unbroken trail he had no flotation problems. It’s worth noting that we’re talking about dense, icy Maine snow here. Your mileage may vary on fluffy Colorado powder.

If you’re worried about ending up between sizes, you could always get a pair of tails rather than sizing up. I like this option for backpackers because it offers the most versatility, and as we all know, pack weight can change dramatically from day to day. 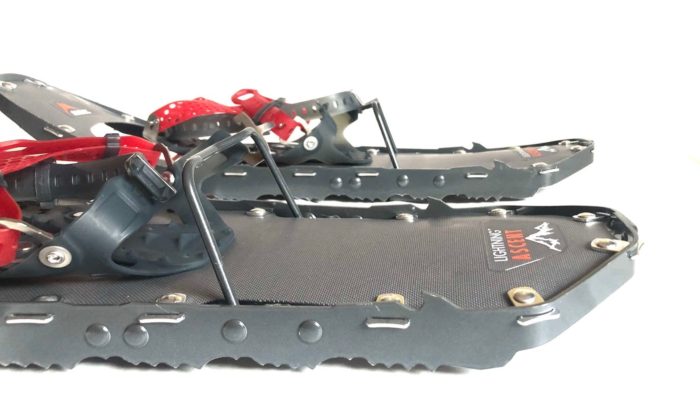 Finally, a practical application for high heels! The heel lift bars work as advertised, taking most of the strain off your calf muscles and vastly reducing the challenge of steep climbs. I love them. I used them all the time in Maine, trusting my full (and with my pack on, considerable) weight to them and never had them collapse on me. The best part is that they’re very easy to flip up and down. On variable terrain where you might be engaging/disengaging them frequently, this is a valuable saver of time and effort. My partner even mastered the art of knocking them down with a swift tap from his trekking poles—no bending required. It’s my sincere hope that they’ll continue to flip smoothly and easily as they age (and if they do stiffen up, I figure it’s nothing a healthy spritz of WD-40 won’t solve).

MSR’s Paragon binding system is comfortable, as noted above, but it’s not the easiest to adjust (particularly when wearing thick gloves or mittens). It’s tough to get the straps tight enough, and I ended up walking right out of my snowshoe several times before I finally learned to put some serious muscle into tightening the suckers down. User error? Probably, but let’s just say these bindings are conducive to potential mistakes. Ratchet-style bindings would be easier to secure, though they would provide less comfort and probably more potential ways to fail.

The narrowness of these snowshoes makes for a very natural, easy gait, but it also makes them a tad unstable. You might call this the waddle-wobble tradeoff. By wobble, I mean that one side of the snowshoe might sink in a bit more than the other on a given step, causing your foot to tilt. My ankles got a workout compensating for this instability, but I did get used to it in time.

Disclaimer: I have the ankle stability of a newborn foal taking its first steps, so this could skew my perception of the Ascents’ lateral stability. Fellow loose-ankled hikers: take note! The rest of you: your mileage may vary.

No need to elaborate much on this one: the Lightning™ Ascent snowshoes cost $320, and that’s a lot of cash. You get a lightweight, comfy, and reliable product for your money—it’s up to you to decide whether or not it’s worth the expense. 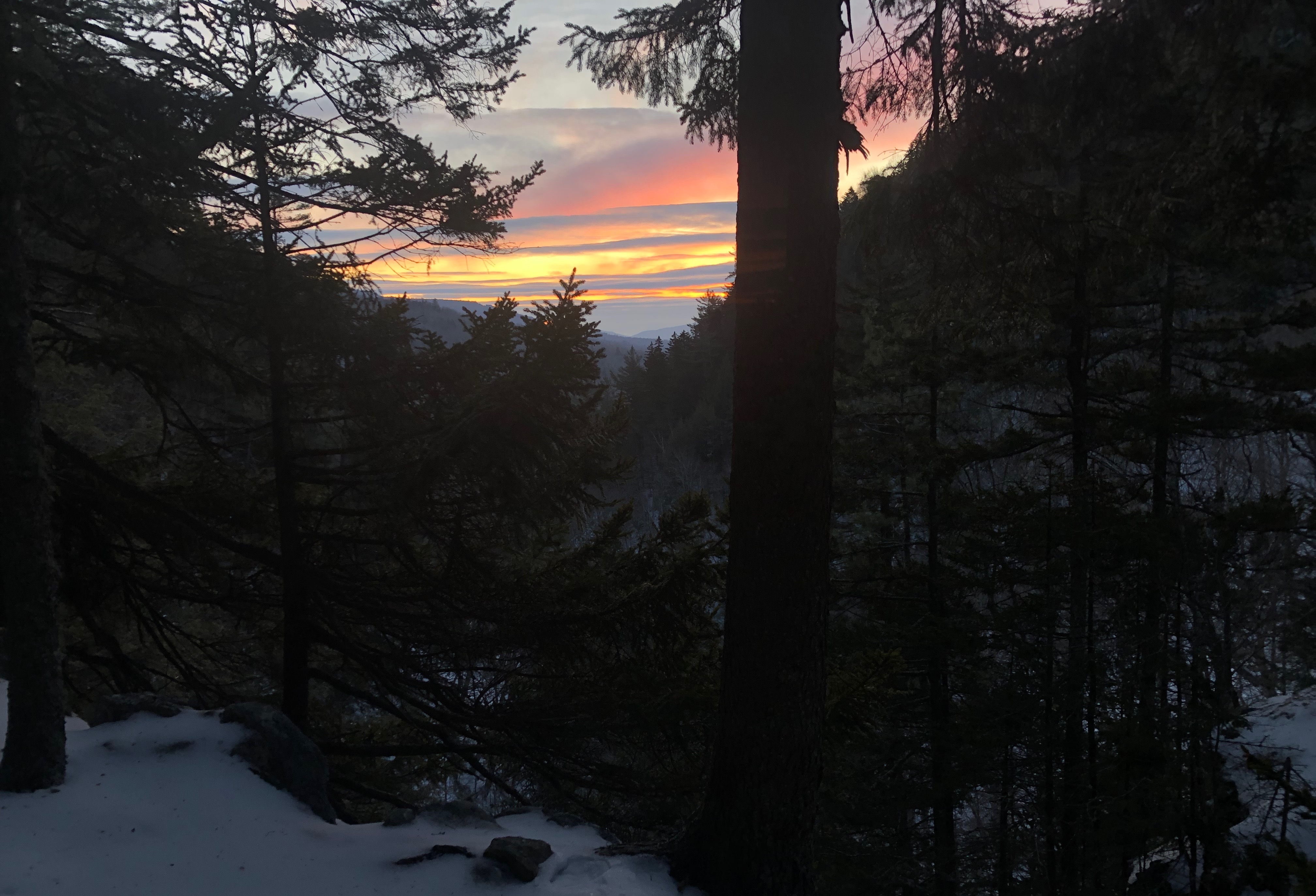 A snowy sunrise in Maine. A good set of snowshoes gives you access to unparalleled four-season beauty.

Snowshoeing doesn’t require a lot of skill: if you can walk under normal circumstances, you’ll probably do just fine in snowshoes, too. Still, it’s best to practice with your snowshoes before taking them out on an extended or difficult hike, as they can be a bit awkward. Even with narrow models, your gait will be slightly different and you’ll probably find yourself engaging muscles you don’t normally feel while hiking, such as your groin. Many snowshoe models also have hinged bindings that allow your foot to pivot independently of the main snowshoe deck—a feature that improves precision and traction, but definitely takes some getting used to.

How Do They Work?

Snowshoes are designed to keep you “afloat” on the snow by distributing your weight. Generally, bigger snowshoes will provide more flotation by distributing your weight over a larger area. If you weigh more or plan to carry a heavy pack, you’ll want more surface area in your snowshoe, and so on. Some snowshoes add surface area by lengthening, rather than widening, the snowshoe, which makes for a more natural gait. The tradeoff here is that narrow, long snowshoes sometimes lack the stability of wide ones.

Even the best snowshoes are heavy and awkward compared to regular footwear, so you’ll need at least six inches of snow on the ground (but probably more like 12) to make them worth your while. If you’ll be sticking to relatively flat trails, there are a multitude of basic and affordable options available. If you aim to tackle rugged, steep terrain, though, you’ll want a durable model with aggressive traction, heel lifters, and reliable bindings.

This product was donated for purpose of review