Jeff Vierling started Tailwind with the same thought that’s sprung innovations of all kinds over the years: while emptying his stomach contents into a trash can after finishing his first Leadville 100 (a 100-mile running race in Colorado through the Rocky Mountains), he thought, “There’s gotta be a better way.” With that thought in mind he and his wife, Jenny, developed Tailwind Nutrition, a powder specifically designed to combat the nutritional hurdles that endurance athletes face while competing. They are meant to meet the calorie, hydration, and electrolyte needs of people who exercise for a very, very long time. Their tagline—“All you need, all day. Really”—seems like an awfully tall order, but they’ve become something of a cult hit in the running community. I haven’t run a race that hasn’t offered Tailwind at aid stations in the past year. 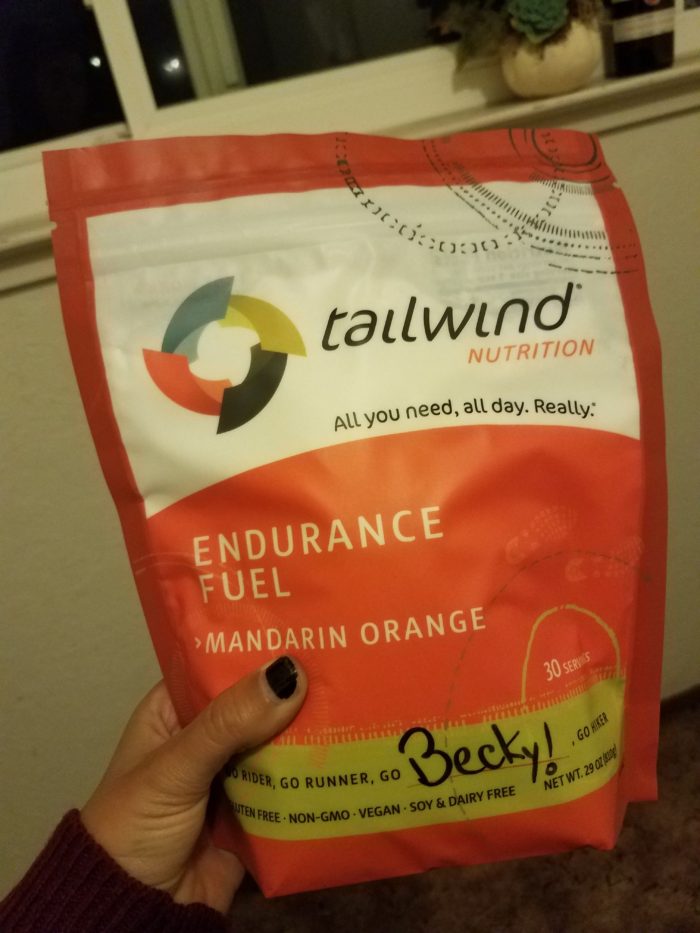 I am something of a nutritional imbecile when it comes to fueling during any of my (very amateur) athletic endeavors. I’ve done a lot of trial and error over the years (emphasis on error) that have resulted in my own chucking it in a trash can/port-a-potty/behind a tree in a neighbor’s lawn moments, but these days I have a shortlist of things I know I can eat before, during, or after a run that won’t result in a mad dash to the first aid station with a port-a-potty. I am very cautious about testing anything to add to it. Nevertheless, I was highly intrigued when Tailwind sent over an array of their powders to try, because I’ve only ever found endurance powders, gels, or chews I will tolerate, never one I liked.

I’m currently training for my first trail marathon and used these while running ten to 18 miles and hikes in late California summer (it was very hot). I was also interested in using the powders in a backpacking context, since thru-hikers struggle with losing buckets of sweat and caloric deficiencies too, so I brought some along on a trip on the Ohlone Wilderness Trail. Along with their regular endurance fuel, they also sent over samples of their recovery drinks, which I usually mixed in the car to drink on my way home after a long run or all-day hike. 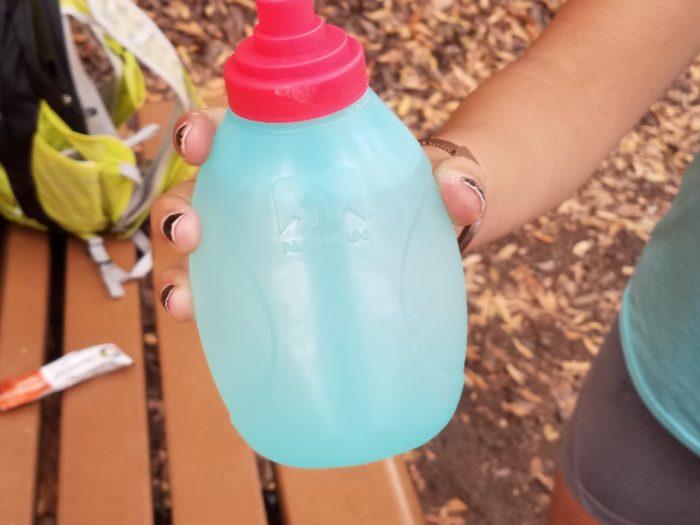 It is recommended to mix two to three scoops with 20-24 ounces of water, but I’ve found myself tweaking that based on what activity I was doing, the weather, or how I was feeling. It mixes together easily with a quick shake and leaves you with a clear drink that looks like water. A packet of the recovery powder is meant to be mixed with 16 ounces of water and consumed within a half hour of exercise. 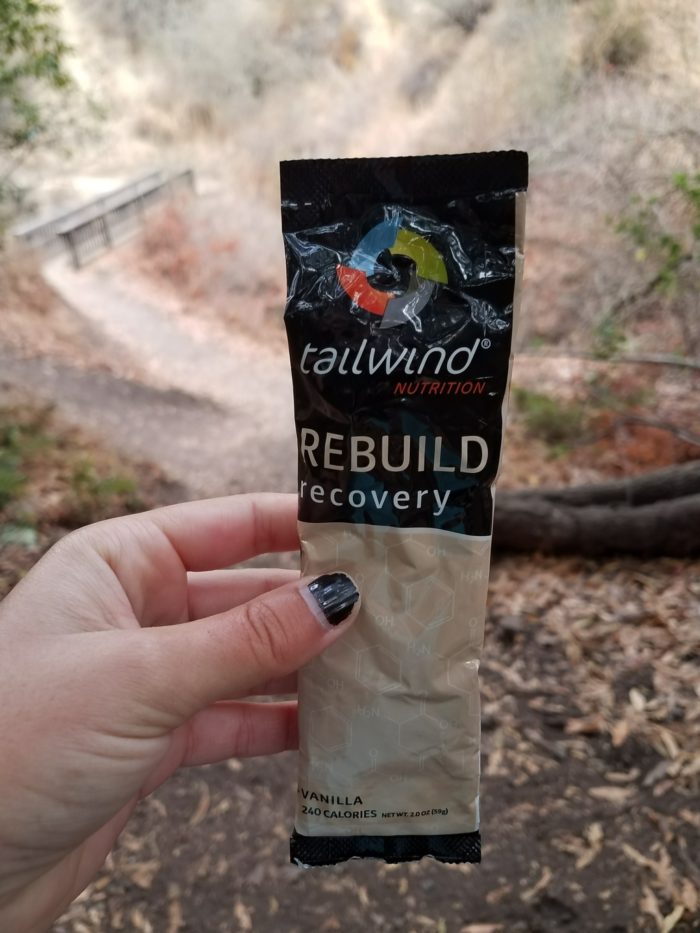 I was sent the entire array of flavors that Tailwind Nutrition offers, and found I preferred the orange and lemon flavors the most, which came as no surprise to me, since those are the flavors I prefer in most things. I also really liked the unflavored variety, which did make me feel like a sociopath, although it does have a very mildly sweet flavor. Not wanting to waste any of my water on a flavor I might end up not liking, I forced my brother to use flavors I generally avoid (berry, tropical, raspberry) so I could try a sip without commitment and found I didn’t have my usual objection to those flavors. Tailwind tastes more like flavored water than your average electrolyte drink, which meant that flavors I usually find overly sweet were far less unpleasant than I expected them to be. I also really liked the less syrupy texture while I was running; when my stomach starts raising objections during a run, putting anything sugary in my mouth makes me gag. I found Tailwind to be far more refreshing and easier to consume than other thick and sweet drink mixes or worse, choking down a gel.

I was even more nervous about the recovery drinks because I strongly dislike the taste of protein powder. I usually mix mine in a smoothie blended with lots of fruit that I use to disguise the chalky aftertaste that always seems to exist in any protein powder I tried. For the sake of review, I felt like I had to consume Tailwind’s recovery powder as recommended on the packaging, which involved mixing it with 16 ounces of water and shaking. Despite its ten grams of protein, it didn’t have any chalky aftertaste, and the power dissolved easily with a couple of shakes (no powder caught in the corners and no blender ball needed). Like the endurance fuel, it wasn’t as thick and syrupy as I expected and it’s easy to sip on.

After spending my entire running “career” in San Francisco, spending this summer in the much hotter San Jose had been a challenge, running-wise. After years of Karl the Fog shielding me, I was slowly coming to accept that summer meant slower runs that left me more drained afterward than a longer run in winter. While Tailwind doesn’t exactly make running in 90-degree heat any more pleasant, it does forestall the dreaded bonk and help me get calories during long summer runs when eating anything in the heat feels completely impossible. It also streamlines my fueling while running process, which used to involve tracking my miles so I could force down a gel at predetermined mile markers. While running a half marathon with my friend and frequent running partner, Alicia, this June, I instructed her to call me out any time I complained (apparently you’re a better runner when you keep yourself in a positive head space. Who knew?). The only two times she had to remind me to stay positive where the two times I stopped to force myself to gag down a gel. With Tailwind, I just sip frequently and without much thought, removing one constant and annoying train of thought I usually have while running.

For whatever reason, I sometimes have more adverse stomach issues while trying to digest whatever I consume immediately after a run (maybe it’s getting home and immediately demolishing five tacos? I can’t be sure.).  Sipping on the recovery drink on the way home has helped me bounce back from exercise sooner and help assuage some of the post-run hunger that leads to poor post-run eating decisions. 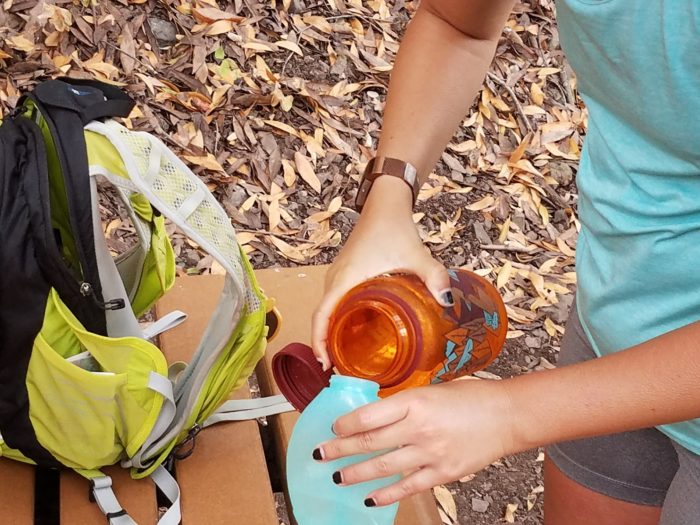 One of the huge convenience factors of Tailwind is how clean it leaves your water bottle once you finish drinking it. Backpackers could easily finish of a bottle of water mixed with Tailwind, refill it and use that water to cook your mac and cheese with zero added flavor. That includes their recovery drink, which somehow leaves no chocolate residue or sugary film of any kind. I usually carry a tiny plastic bottle in addition to my water bladder when running because I would never mix powders in something as impossible to clean as my hydration pack. But the drink rinses out easily, and I’ve found a couple of sips of clean water through the straw cleans it out immediately.

Electrolyte powders and recovery drinks are both things I know should be a regular part of my runs and backpacking trips, but are often not. Tailwind is tasty and convenient enough to change that and I’ve already planned to purchase more when the time comes. The added bonus is I’m far less likely to chuck it in a port-a-potty ever again, which, I gotta say, is a helluva added bonus.

Tailwind recently came out with a third recovery drink flavor, Coffee! Huge news for any fans of that delicious, life-giving miracle juice like, well, me.  It has a chocolate-y coffee flavor and I thought it tasted like java chocolate chip ice cream. I did think it lost the coffee flavor about halfway through and started tasting pretty similar to Tailwind’s Chocolate Rebuild, but given that I liked that flavor as well, that was a non-issue for me.

As you would expect, the flavor is different from Tailwind’s other rebuild flavors in that it has caffeine in it. I drank a serving after an early AM weekend run and tried to nap after (which was totally a test for the purposes of this review and not at all because I love me a post long run nap). My powers of nap are unimpeachable, particularly after the crack of dawn wake up call necessary to find trailhead parking on the weekends, but there was no nap to be had that day, so the caffeine is there and could definitely replace your cup of coffee on run before work days.

Since I don’t like drinking caffeine late in the day, I would probably never take this flavor backpacking where it would be consumed in the late afternoon at the earliest. I would (and will) use it on days where my morning run is followed by work, errands, or anything other than my beloved post long run nap.

All items were donated for purposes of review.