All About the Right to Roam and Hiking in Finland

Recently I bought a basic hardtail mountain bike. Part of the reason was that I wanted to regain the ability to simply turn away from the bike lane and onto any pathway or singletrack that I found alluring on my way to or from work. That I can do this is thanks to two main aspects: that my urban commute actually passes through a few differently sized patches of forest, and that Finland has one of the most comprehensive rulesets regarding the right to roam. 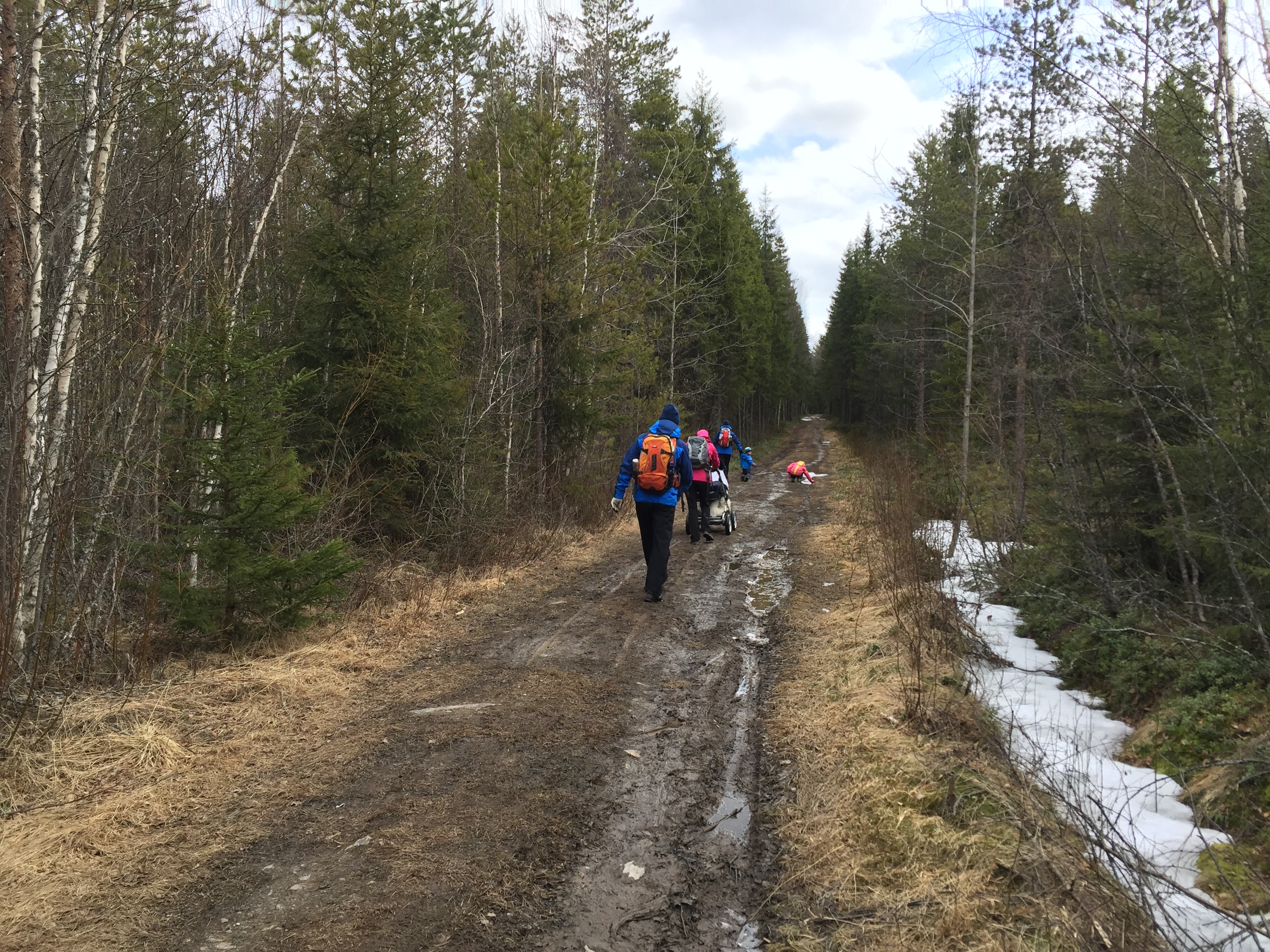 A typical Finnish outdoors activity is going out with the family along a nearby trail, and stopping for a lunch break before walking back again. The picture shows the grandparents with their child and grandchildren out on such a walk during early spring.

The Finnish version of right to roam is deeply ingrained in Finnish culture, and goes under the name of jokamiehenoikeudet, literally “the rights of every man.” The brief version is that everyone has the right to move by muscle power, including hiking, skiing, and biking, through almost any land. People are also allowed to pick berries and mushrooms, as well as to temporarily set up camp. The principles aren’t unheard of; they strongly resemble the Swedish version thanks to the shared history of the two countries, but they are unique enough that the Finnish public broadcaster YLE last year boosted a campaign to get them accepted as UNESCO Intangible Cultural Heritage. 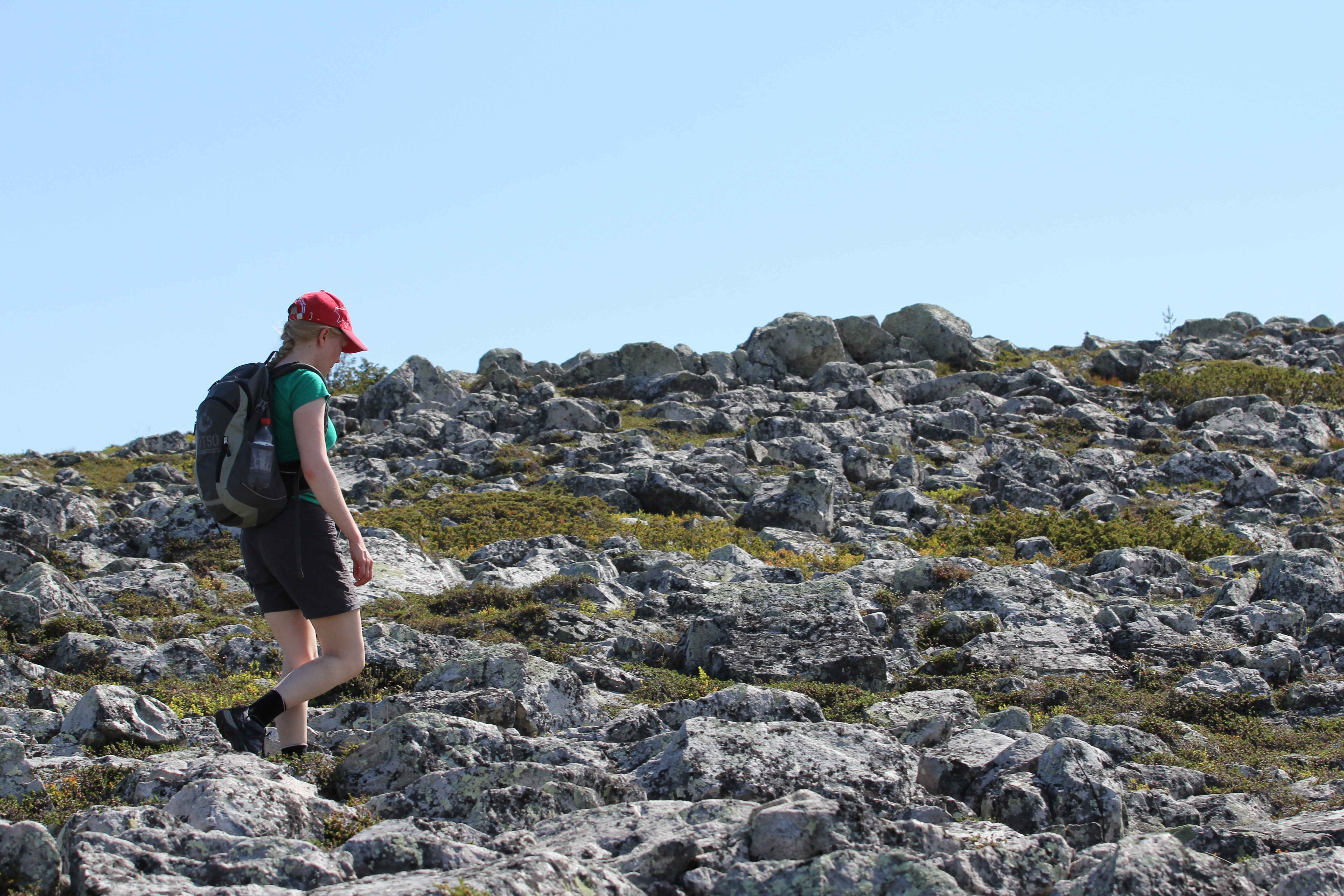 Some of the most stunning trails in Finland are found in the national parks, such as here on top of Mount Aakenustunturi in Pallas-Yllästunturi National Park just north of the 68th parallel.

However, a number of limitations are also in place. The most important principle is that the right to roam may never intrude on the livelihood of anyone, nor may it cause damage to property or cause disturbance. In practice this means that without permission of the landowner one can’t roam on agricultural land or through gardens, pitch camp too close to buildings, or collect firewood from the forest. Here it is important to note that in Finland individual plots of agricultural land usually are small and feature hikeable dirt tracks for agricultural vehicles, which means that any field can usually be circumvented with ease. Other prohibited activities include making fires outside of designated locations, and any use of motorized vehicles except on designated roads and tracks.

Hikers with experience from more well-traveled trails will immediately realize that this is a paradox as movement will lead to erosion, and as such the very use of the right to roam is bound to cause some damage to the surrounding countryside. How then can this system that looks good on paper be brought to work in real life? 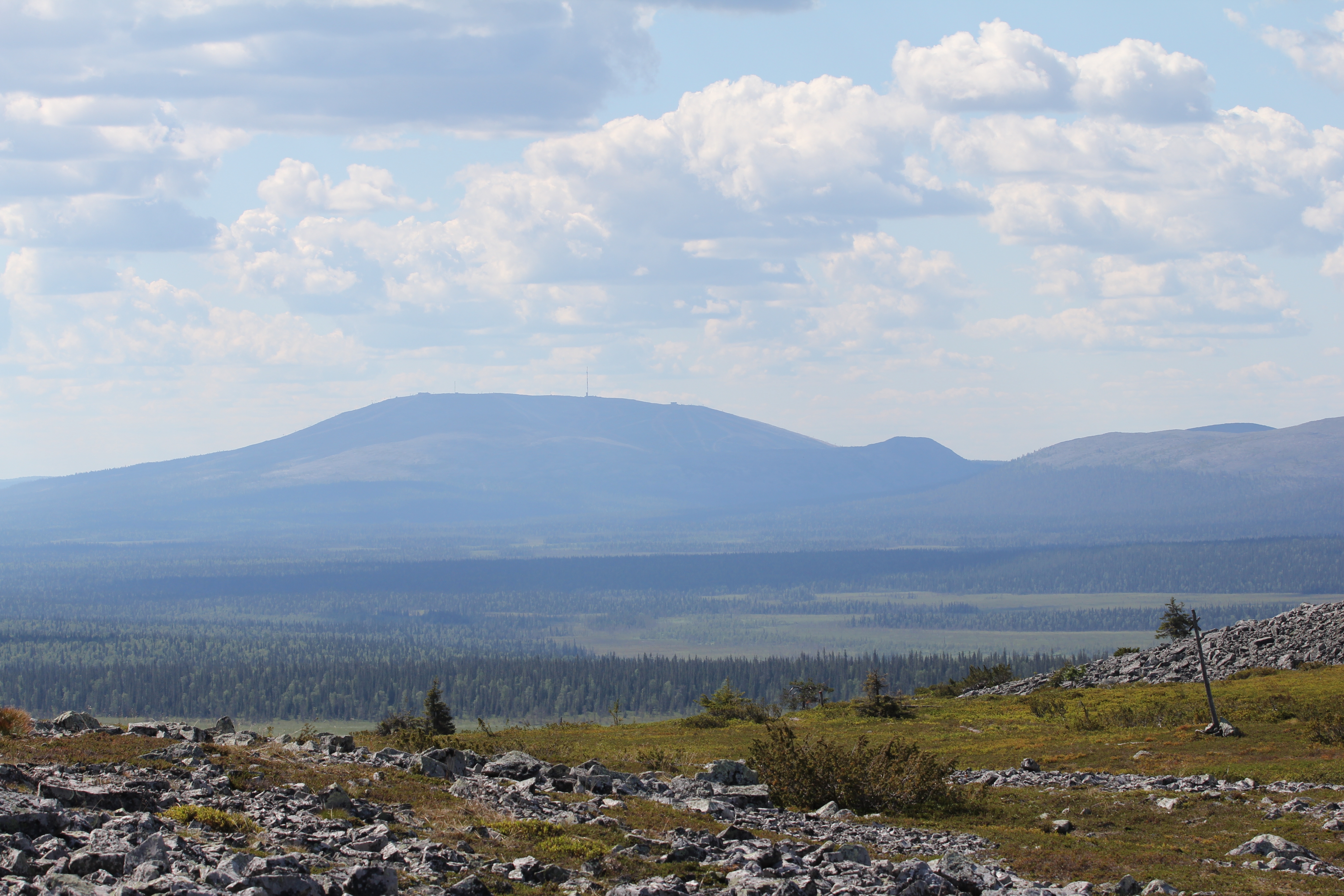 Another view from Mount Aakenustunturi.

The most important fact is that even considering that spending time outdoors is an extremely popular pastime in Finland, by unlocking all land for roaming the supply of possible trails to hike on vastly outstrips the demand. However, all trails aren’t created equal, and some trails will invariably prove more popular than others. To ensure that this doesn’t become a problem, the state (when on public land) or local communities and organizations have created and maintain a nationwide network of designated trails. These are usually rather short; the majority of trails in Finland are shorter than 30 miles, and feature only limited infrastructure. However, a few blazes and a laavu (the Finnish version of an Adirondack shelter) with a fire pit can go a long way in ensuring that people stay on existing trails and don’t litter or start forest fires. Volunteers often participate in maintaining these trails by performing smaller trail maintenance work, building causeways, and stocking up the fireplaces with firewood. 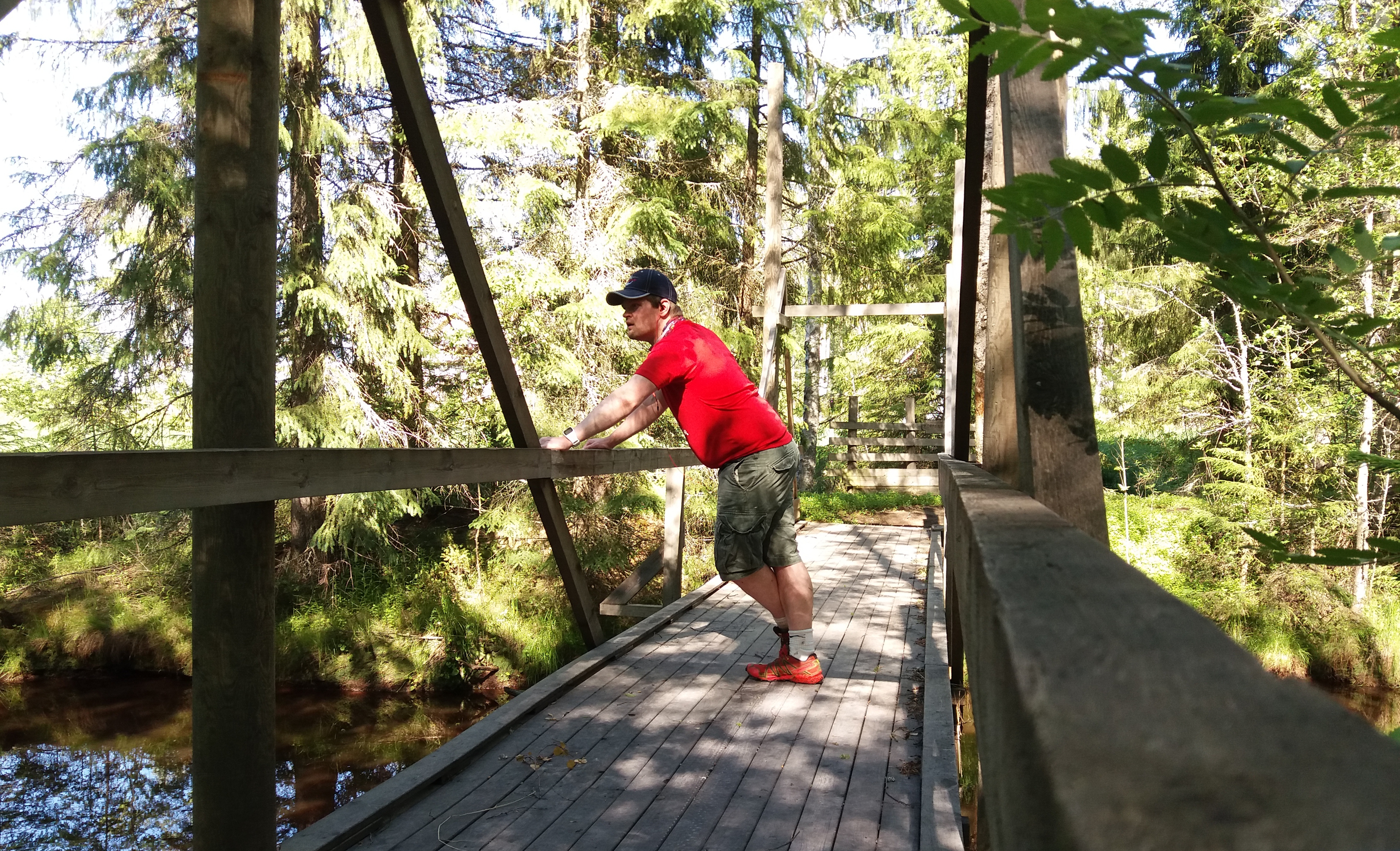 The author on a local trail. The small wooden bridge is typical of the light infrastructure that characterizes the many local trails managed by communities and volunteers.

The vast majority of hikes are day trips with the obligatory sausage being grilled over open fire, but the most popular destinations are the state-managed national parks and nature sites. The largest of these are found in the sparsely populated northern parts of the country, and are more heavily regulated to ensure that the wilderness doesn’t suffer from overuse. Still, the regulatory nature shouldn’t be overemphasized, as in most cases it is just a question of not allowing campsites and mountain bikes outside of designated areas. It is in these parks the few trails that have reached national fame are found, such as the Karhunkierros (the bear’s trail): a 50-mile point-to-point trail in the wilderness of Kuusamo close to the Russian border. 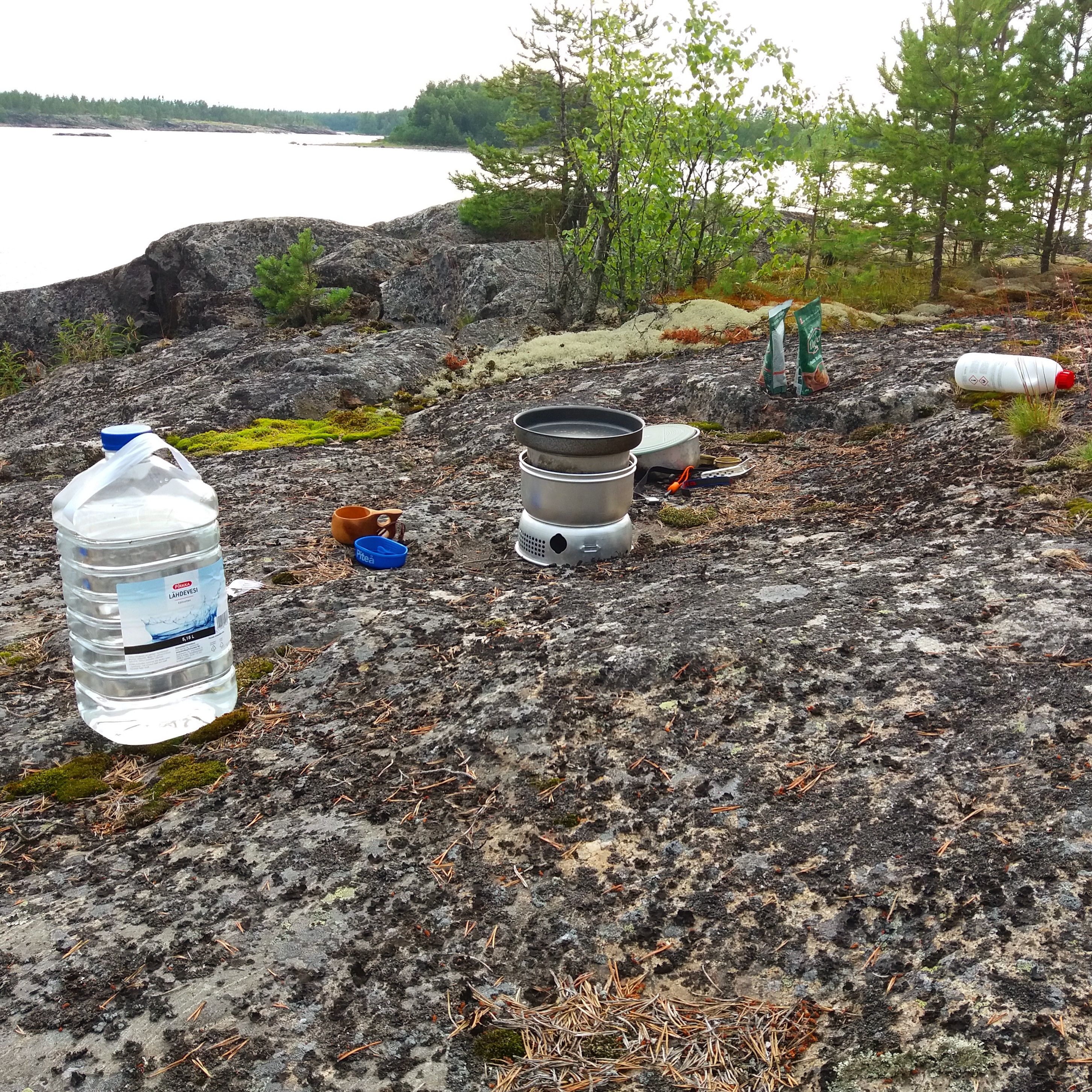 Preparing an evening meal in the light northern summer night while camping overnight on an uninhabited island.

Float fishing and ice fishing in most waters are covered under the right to roam, and by paying the national fisheries management fee, ranging from seven Euros for a day to 50 Euros for the whole year, you get the right to fish nationwide with a single rod. The one major exception is streams where trout and salmon rises. These are usually covered under stricter rules that include additional license fees, bag limits, and/or catch and release. Hunting rights are not covered under the right to roam system. Instead, hunting rights by default always belong to the landowner. Hunting is a relatively popular hobby in the countryside, and as most landowners own less than 50 acres it is common that villagers get together to form hunting clubs where the club lease the hunting rights for most surrounding land. Membership is then usually open to anyone living in the village or owning land in it, and members get the right to hunt on all land where the rights have been leased.

So how does the jokamiehenoikeudet system hold together? Surprisingly well. Most landowners are happy to accept the current system, though some criticism has been voiced that parts of the populace seem to believe the rights come without responsibilities. Part of why it works is undoubtedly that Finland until two generations ago was a rural country, but also that schools regularly bringing their pupils outdoors both for lessons as well as for other events. This means that many people still today have a basic understanding of how to behave in the forests, including concepts such as Leave No Trace—though no hiking culture is perfect in this regard. The system is ingrained in Finnish culture to the extent that many different stakeholders contribute to both spread the understanding of how the right to roam works, as well as what responsibilities we hikers have. Unfortunately, this very fact that might be the system’s biggest strength is also a significant weakness if the concept ever was to be exported. 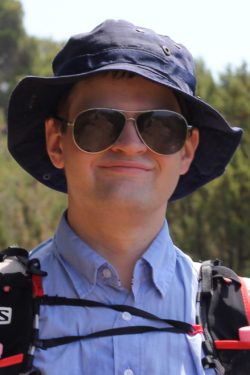 Robin Häggblom lives in a small coastal city in Finland, where he enjoys spending time in the outdoors in any number of ways. You can follow his wanderings at his Instagram account @outdoorsinostrobothnia.