Weeks ago I had suggested to some hiker friends that I might write a blog weighing in on discussions from social media regarding the Scott Jurek controversy. But today I’m like hell no, no more. Then of course, the cinematic interpretation of Bill Bryson’s bestselling book about the Appalachian Trail, A Walk in the Woods, was released this past week. The hikersphere, to my sensitivities, seems utterly saturated with these topics. However, I am completely confident that if you are reading this with any desire to hike the Appalachian Trail, for a day hike, weekend hike, longer section hike, or thru hike, you will absolutely be able to do so without knowing anything about Scott Jurek or Bill Bryson. So this week, I offer you seven frequently asked questions non hikers have asked me about the Appalachian Trail.

1) Do you carry a gun when you hike? I have a long and a short answer to this question. The long answer: If I did carry a gun I wouldn’t tell you, because I might have to shoot you and I’d want the element of surprise. I will say hikers don’t like extra weight and guns are extra pack weight. Concealed weapons, even with a permit, are not legal in all places along the trail. Although I would be willing to shoot somebody in self defense, I think being concealed by the woods (especially in the dark) is a distinct defensive advantage and the mountains are rich in large stones perfect for bashing some bad guy’s skull into a voiceless pulp. Of course, a stealthy retreat is an even easier way to escape being murdered by the innumerable packs of marauding bandits and sexually depraved prowlers who live in the National Park and Forest lands. The short answer: No. Hell no.

2) What about animals? There are wolves out there. And bears. You need a gun to defend yourself, don’t you? There are no wolves along the Appalachian Trail. There are black bears, who usually run away from people. To stave off the unlikely event of a bear attack, or at least the presence of curious bears in the perimeter of your bedroll, cook a comfortable distance from where you sleep and hang your food away from camp. Leave the shelter or campsite clean so the next hiker isn’t greeted by bears eating your garbage. As far as guns, I once hiked with a guy who confided in me he was carrying an old snub nosed revolver– loaded. At first I was comforted sharing a shelter with a one man security force, but then I began to worry about him discharging a firearm in the pitch darkness of the shelter. How would he see to shoot? And what if the gun discharged accidentally in a crowded shelter? And a tall man (like me) might be mistaken in the dark for a bear. So, I discovered that the presence of guns was no comfort among hikers. I asked my friend if he thought his pistol could stop a bear? He said it would scare one off– probably. Then after hiking for months I realized the most intrusive animal on the Appalachian Trail were the mice who lived in the trail shelters. Even if someone could shoot a tiny mouse in the blind darkness of a full capacity shelter without hitting another hiker, I’m still certain the occupants would turn on the shooter. So, yeah, hang your food bag and stop being a fraidy cat.

3) You ever see a bear out there? Yes. Eight or nine of them in a three day span along the Delaware River and into New Jersey during my 2011 hike.

4) Did one attack you? No. All but one of them ran away as soon as they saw me.

5) What happened to the one that didn’t run? That one weighed about five hundred or so pounds and ignored me while it dug around in a rotten stump, probably for grubs or something.

6) Were you scared? Yes. I didn’t shit my pants, but I could see that as a reasonable expression of awe in the presence of such a magnificent and formidable omnivore.

7) Do you you carry a knife? Yes. A very small one, good for opening packets of noodles or cutting cord for hanging that food bag. If I’m careful, I can clean my toenails with it too. 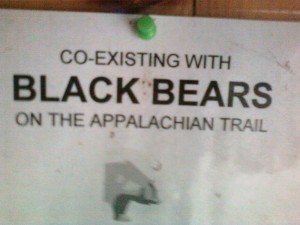 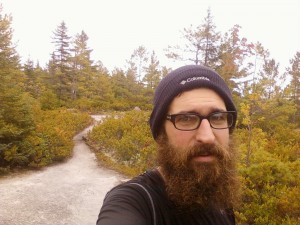