Seven Lessons Learned While Hiking The Appalachian Trail In Midwinter

The following is a guest post courtesy of Alex “Professor” Bentley. Alex is a junior at Wofford College pursuing a career in herpetolgy. From a young age he has been enthusiastic about the outdoors and photography. The documentary, “Flow”, is the culmination of these two passions.

Most Appalachian Trail thru-hikers put their trail time in during the spring, summer and fall. Less often do hikers venture out on long distance trips in the dead of winter, as we did this past January.

For an independent study through Wofford College Interim Matthew Aurednick, The Major (Chris Cinatl, my cousin), and I set out on a Virginia section of trail to make a documentary on the history and culture of the AT. I had a good deal of experience on the trail prior to January, however this experience was unlike any other I’d had on the trail before. Both through the making of the documentary, Flow: A Journey Through Culture and History on the Appalachian Trail, and hiking during the coldest part of the year, we faced novel challenges that inspired a great deal of growth and learning. The following list briefly describes some of the things we learned while on the trail.

1) There’s no shame in filling a two man tent with three large men.

Let’s be honest, when it’s dirt cold outside, you’ll do what you can to get all the warmth possible. Societal norms concerning guys sleeping together quickly fade with a desperation for staying warm. Putting three dudes in a small tent is energy efficient when it comes to generating and conserving heat!

2) Hiking can be more fun than camping!

“Moving on a brisk morning makes one feel less like a biological organism and more like a rusted lawn mower being fired up after a year of sitting in a shed.”

During the other three seasons of the year, I find camping to be delightful! Cool or warm evenings make sitting and talking around the camp fire pleasant, and comfortable sleeping is usually not hard to catch. However, this is not the case for winter camping. When it’s zero degrees and windy, all of a sudden one’s inclination to lounge around outside disappears. Leaving the sleeping bag in the morning is like ripping off a band aid. The concentration and stamina required to just lace up your boots each morning is comparable to doing yoga in briar patch. Moving on a brisk morning makes one feel less like a biological organism and more like a rusted lawn mower being fired up after a year of sitting in a shed.

On the flip side, once you do get moving it’s not all that bad! Hiking in the summer, sweating is simply unavoidable. However sweat is fairly easy to avoid in the winter. By layering, one is able to thermo-regulate and reach a comfortable state. Furthermore, the views are spectacular! Leafless trees make expansive, scenic views almost constantly available for your viewing pleasure. Plus, snow is just outright gorgeous.

Tip: get waterproof/neoprene socks to keep your feet from freezing while hiking through snow.

You’ve probably had someone at some point tell you to get your eyes off the ground while hiking so you can enjoy the scenery around you. I’m not saying to keep your eyes glued to the dirt, but winter reveled to me merit in looking down while hiking. There was often snow on the ground; in the snow were footprints and lots of them! I found immense enjoyment in identifying different animal tracks on the trail and following them. We saw everything from small mammal tracks, to bird tracks, to those of bobcat and bear. Sometimes we would follow rabbit or deer tracks for a mile or more on the trail! I realized that we weren’t the only ones using the footpath. This realization made me feel a deeper connection with other living constituents of the forest. 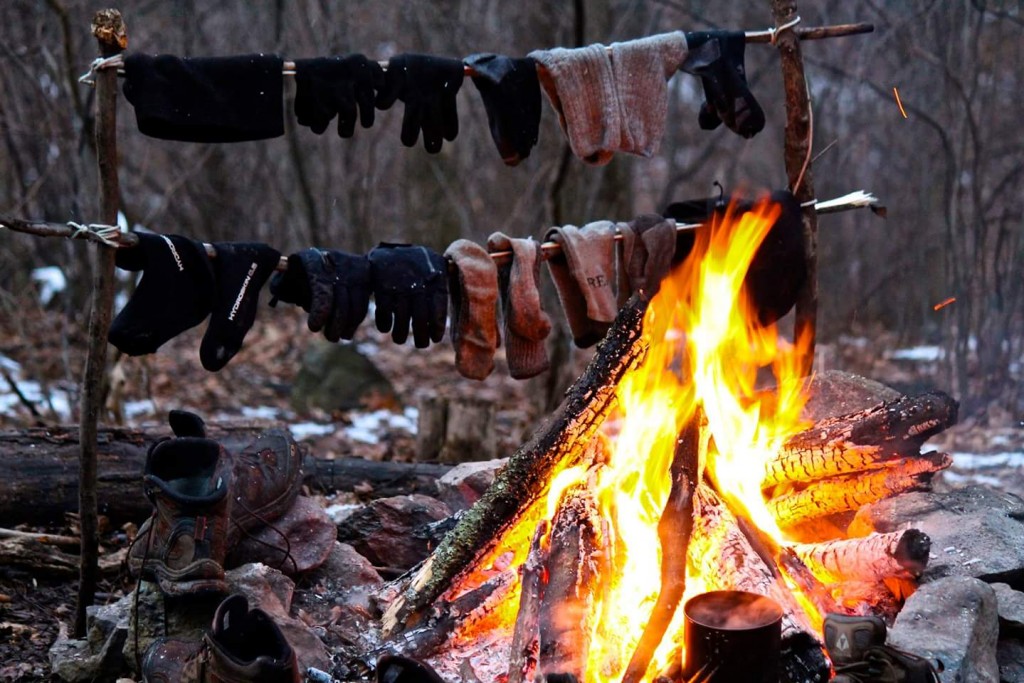 In a very primitive way, winter taught me how to adapt. Virtually every aspect of long distance hiking is different in the winter. While hiking one must constantly up-layer and down-layer to avoid sweating. While camping, one is either hugging the fire or in the fetal position at the bottom of the sleeping bag. Water is harder to find, and often times springs are frozen solid. Roads that might otherwise be relied upon to get to towns are many times closed because of bad weather, and the lack of other people on the trail can sometimes make you feel like you’re going stir crazy! One must find ways to cope with the physical implications of the cold and the mental side effects of the solitude.

The winter is harsh. It kicks your butt and doesn’t feel bad about doing so. The cruel nature of the season really pushed me to rely on other people more. Many people strongly promote the development of independence through the trail experience, and that certainly is an important part of the experience.

However winter also taught me the importance of being vulnerable and being able to ask for help. You simply can’t do everything by yourself, especially in winter. You rely on people for rides to town; for staying at hostels; and for mental and emotional support when you hit low points.

The community surrounding the AT is an aspect that sets the Trail apart from other trails. Accepting vulnerability encourages greater communal interaction and relations with other people. Through these interactions one invests themselves more fully in others and forms more meaningful relationships with people. During our trip we reached out to countless people for support, and through this I felt a greater connection with the trail community. Furthermore, it gave me hope for humanity in world seemingly plagued by malevolence.

One of the most unique characteristics of the Appalachian Trail is its culture. From customs such as trail names and trail magic, to the inexplicable graciousness one experiences on the AT, it’s a place like none other. Even though many aspects of the culture, like those just mentioned, have been a part of AT culture for years, the culture is not static.

Our hike this winter, as well as conversations with Kip Redick and others, helped me realize that the culture of the trail constantly changes. During thru hiker season, the trail is thick with hikers, but in the winter one rarely encounters other hikers. The culture becomes thinner. Solitude is far more prevalent than fireside stories with strangers. Trail magic becomes few and far between. One might say that the cultural component of human interaction becomes scarcer, while ones relationship with nature becomes accentuated.

Now don’t get me wrong! Culture doesn’t disappear, it just shifts a bit. You have to dig a little deeper and put forth more effort in seeking out cultural experiences, then you’ll see that it is still very much there.

7) Appreciation for the season of winter

The average person retreats to the warmth of the indoors during winter. I do too for the most part. But a long distance winter trip inescapably surrounds one in cold and seclusion. Personally, such a deep experience in winter fostered an intimate appreciation for the season. The isolation is beautiful in its own right, and I came to love the magic of the blissful snow. One finds affection for the winter in the same way one comes to adore the tough loving nanny. Despite the insensitive and frequent slaps on the wrist and harsh punishment she confers on you, she always comforts you and is there for you when you need it most. And in the end you become a better person.

Winter is the hard grading teacher. It’s the mother that doesn’t put up with your bulls**t. It’s the close friend that says suck it up. Winter breaks you down and builds you up. It is the mountain-top sunset after the grueling climb. Winter is the ache in your feet and the shiver down your spine as you stand front row before your favorite band. It is to grow, learn, humble yourself, fall down and get back up. It is a new frontier! And if nothing more than these, winter is ready for you, when you find you’re ready for it.

If you feel so inclined, grab a bowl of popcorn, find a comfortable position on the couch, and enjoy our documentary below!