Am I Maximizing My Lifespan? – Sierra High Route – Day 4

Cirque Pass: fun in name only

Woke up feeling good. Started the day with one easy mile on the JMT before turning right to go over Cirque Pass. Something about the name Cirque (which is fun to say and write) and the fact that Roper says “there are many ways to ascend” and “the High Route hiker will have little trouble following the gently angled slabs and gullies” helped me start my day out with confidence. This confidence was quickly crushed. 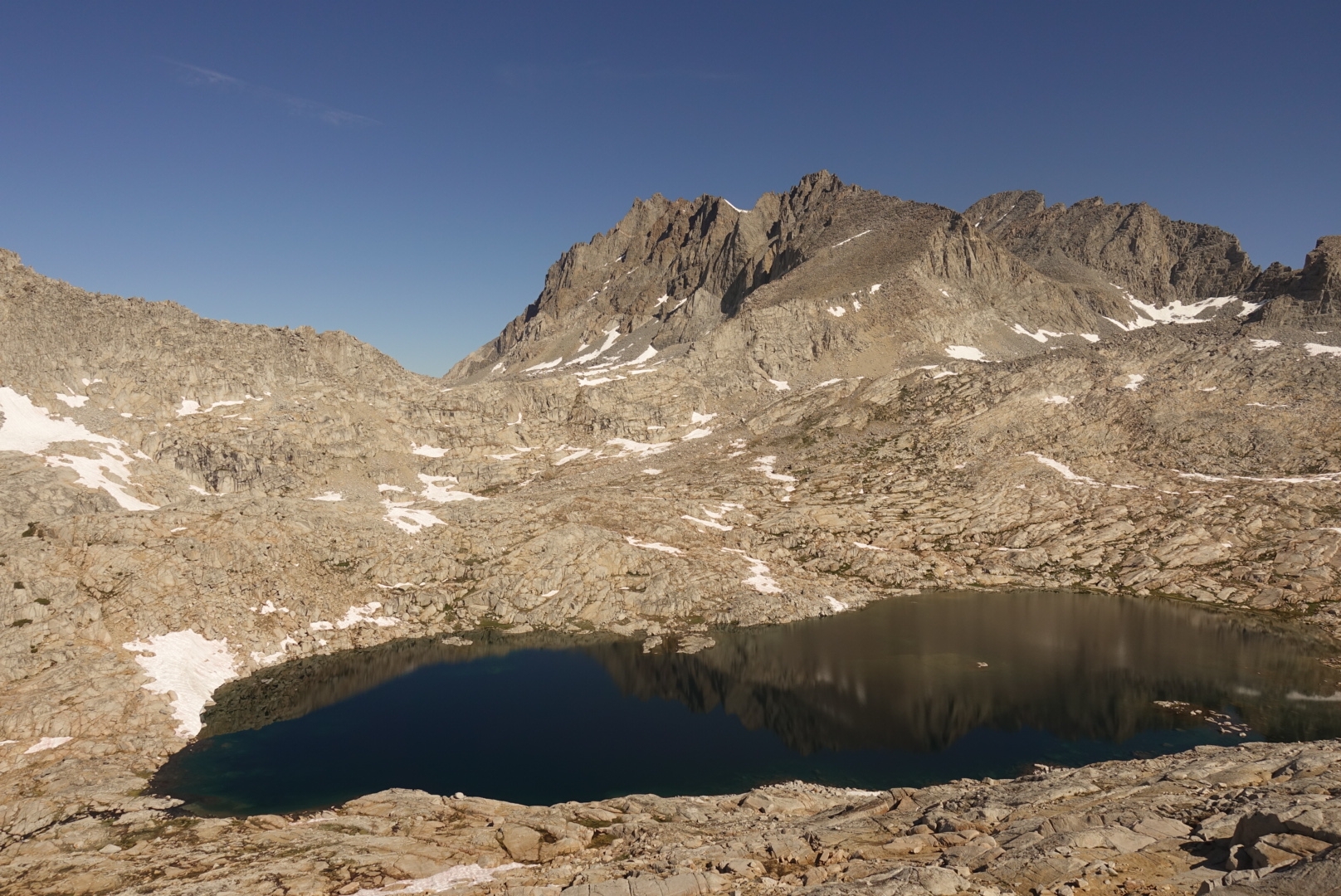 View from the top of Cirque Pass. Potluck Pass is the obvious one on the left.

It took me two hours to go one mile by crow to get to the top of Cirque Pass. I kept getting cliffed out and having to turn around. This was by far my hardest pass yet.

Potluck Pass: even worse than the last

Doesn’t the name “Potluck” sound welcoming, like a gathering of friends? Despite my time on Cirque, I regained my confidence and felt optimistic. Plus, according to Roper, “by looking around carefully…the hiker can avoid class 3 sections“.

It started out okay, but slowly all my options started getting sketchier. I started climbing more and more dangerous things. “I’ll just get over this bit and then it will be clear,” I rationalized to myself. I could see footprints, which meant that it was the correct way, right? (WRONG.) At some point I did a stem problem. I looked at my GPS and realized that I had aimed too far to the left and was actually on the way to summiting the peak near the pass, not to the pass itself. 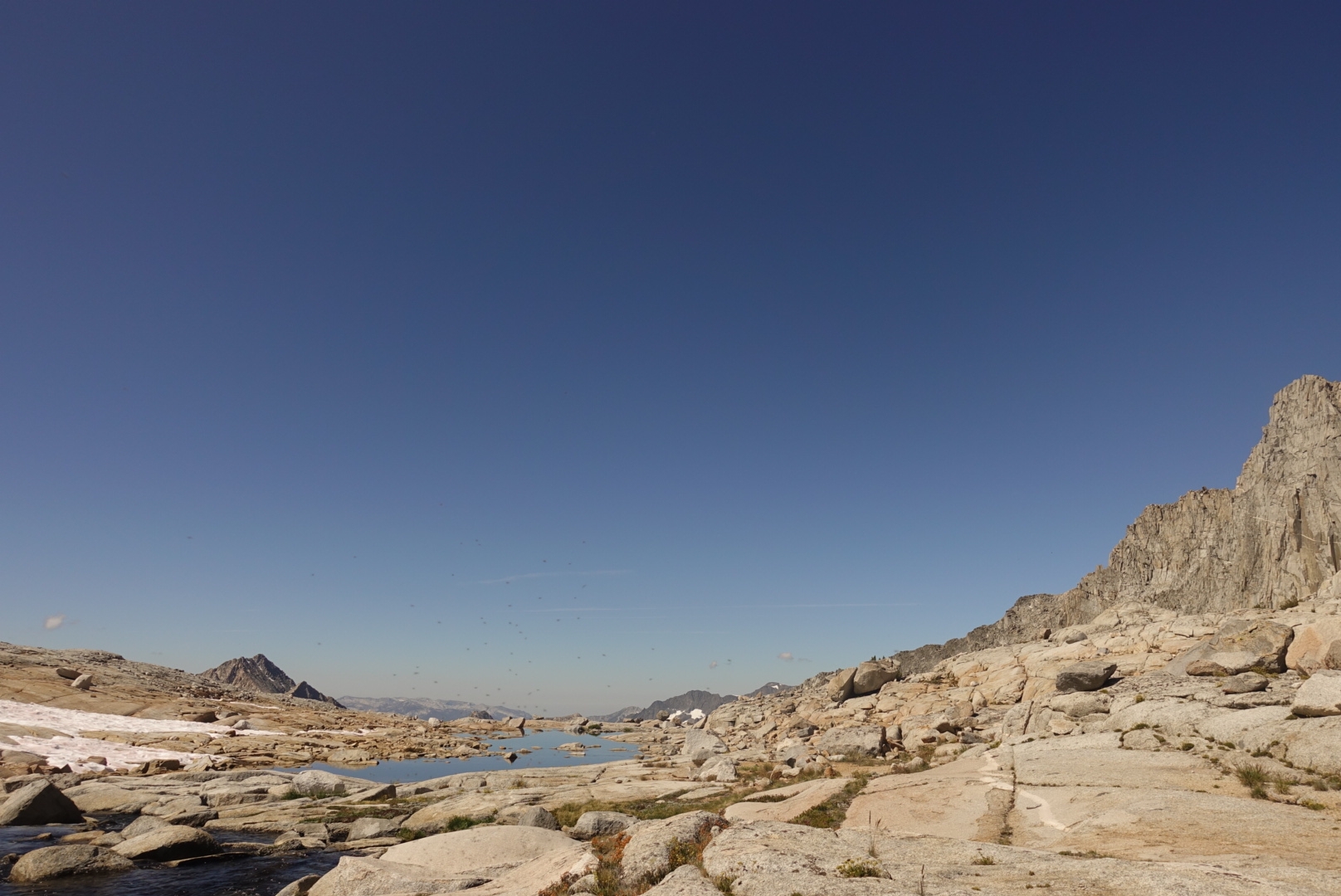 Looking back while starting the climb towards Potluck Pass

I found a rock to lean against to regroup. I knew that:

There was only one option. I had to go back. But there were two problems with descending: lots of scree and redoing sketchy climbing.

I did as much descending on my butt as possible. The scree was so steep that I lost control of my speed and had to aim for a rock to grab on to, but the rocks weren’t stable enough and I ended up causing a rock slide instead. Eventually I was able to dig my feet into the scree enough to slow and aim for an even larger rock that didn’t move when I artfully (hahaha…not) ran into it to stop myself.

When I was doing the down climbing, I remembered a line that Alex Honnold said in Free Solo about how he does not feel an obligation to “maximize lifespan”. When I was climbing down, I kept thinking “I do want to maximize my lifespan”.

After retracing my path down 100 feet or so, I aimed farther to the right and tried again. I was able to find a path that was much easier and reached the top of Potluck Pass. 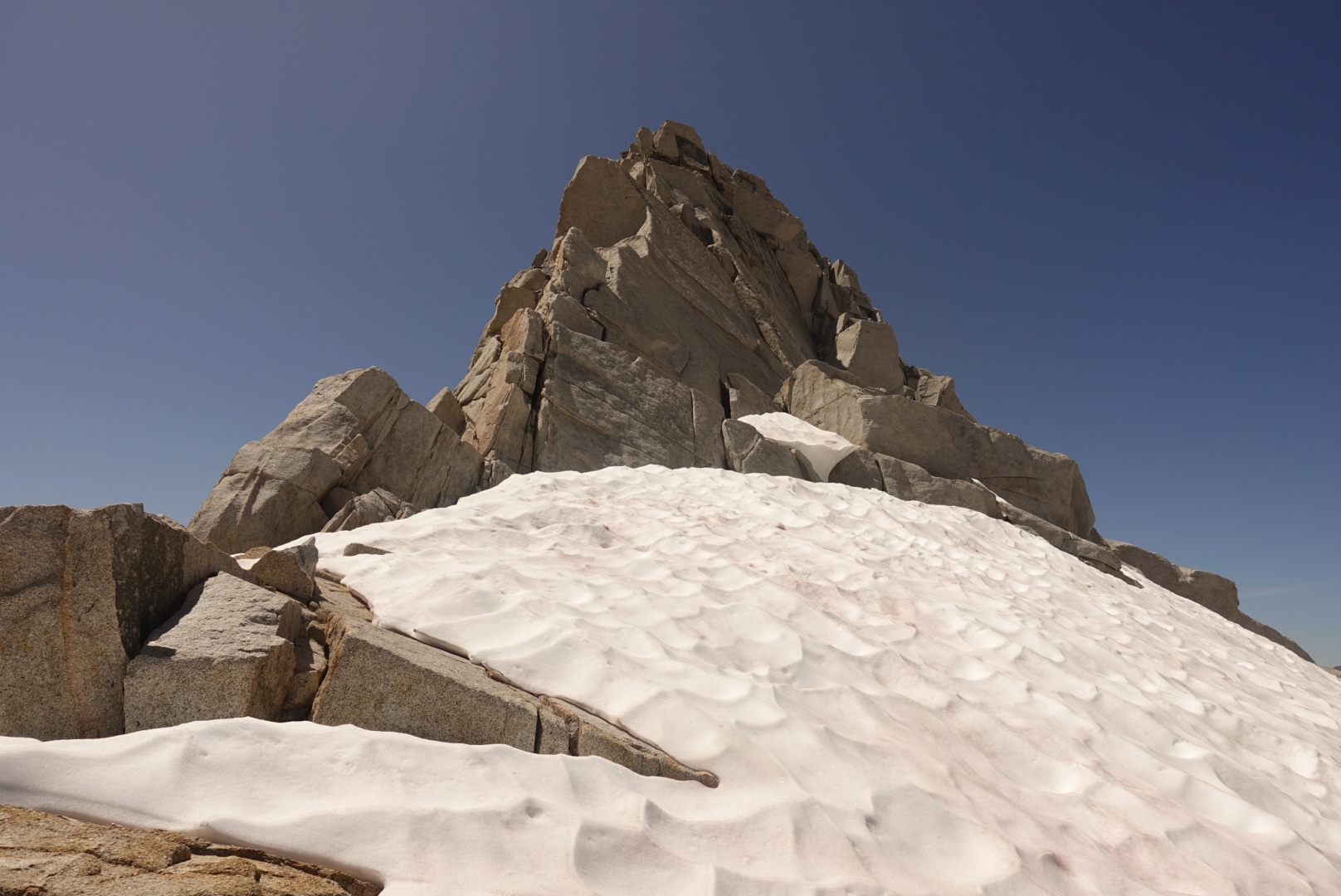 I didn’t freakout when I was doing the less-than-safe decent, but once I was at the top of the pass I kept thinking “What did I do that for?” That’s when I first started thinking about quitting the Sierra High Route.

When I hiked the PCT in 2017, I entered the Sierra in mid-June, when a lot of hikers were flip-flopping to avoid the snow and the swollen rivers. Though everyone in my group made it through with only minor injuries, I still think that going through then was one of the stupidest decisions of my life. I promised I would not put myself in so much danger again. So, why am I out here on the Sierra High Route??? 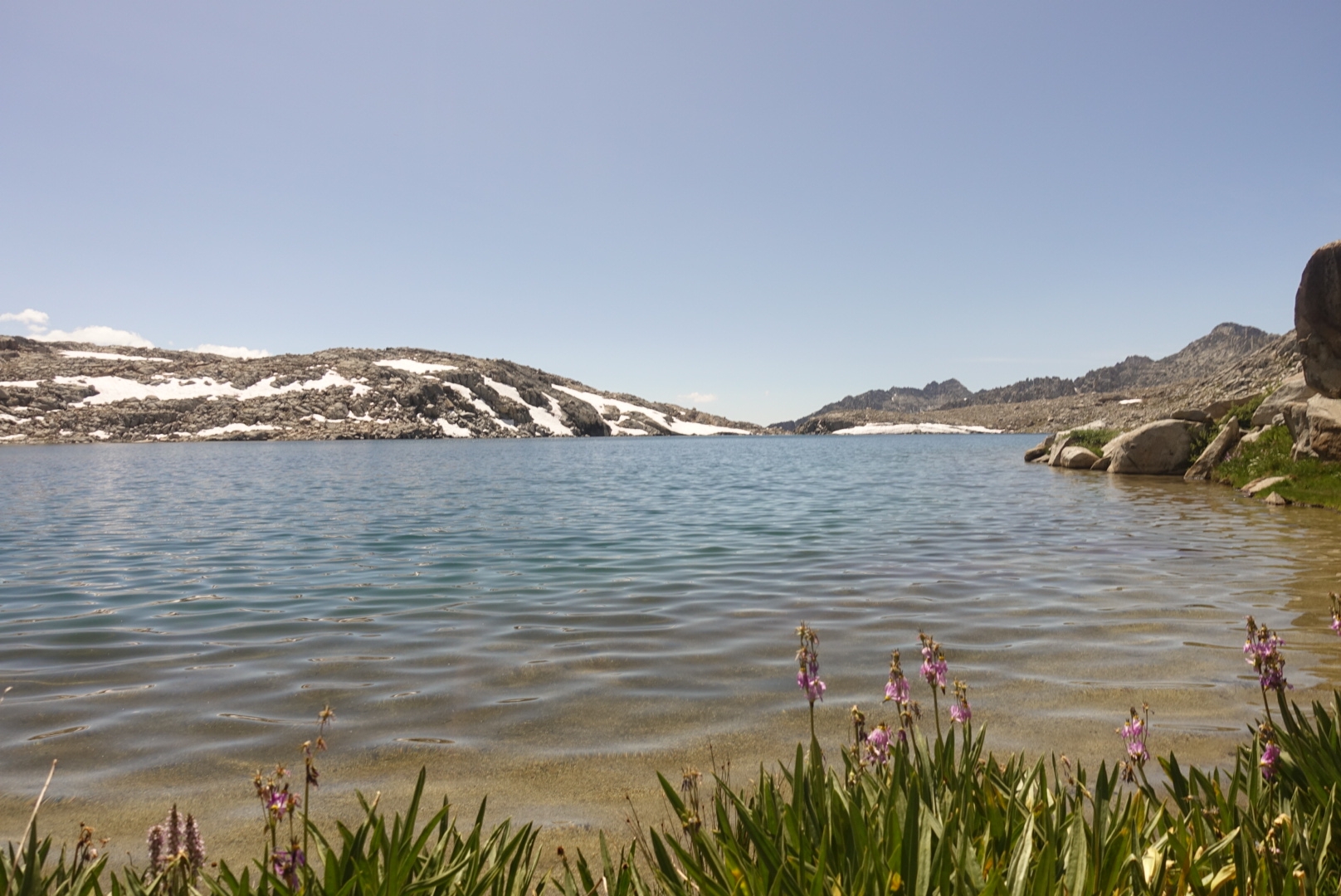 One of many beautiful lakes in the Palisade Basin

The Palisade Basin was a welcome relief. Some chill cross country travel around some beautiful lakes. Saw my first humans of the day: two guys skinny dipping in Lake Bennett. I decided to avoid them and circumnavigated around the other side of the lake. Look at me picking my own route!

The next goal, Knapsack Pass, is “only 200 feet above the level of the lake” according to Roper. I saw a pass looking thing on the other side of the lake easily summited it and congratulated myself on a great end to the day. Next I had to find the bishop pass trail and then I was good to go.

I pulled out my map, but nothing made sense. The lakes weren’t in the right place… The mountains weren’t in the right place… I pulled out my GPS, which was showing me quite far from Knapsack pass in the wrong direction. As I stood there puzzling, I saw a woman hiking towards me. She didn’t respond to my yells of “hello”, so I hiked over to intercept her. Turns out she was listening to very loud drumming.

Her name is KO and works on a trail crew, and is basically everything I find impressive. I asked her if she could help get me orientated. Turns out, I had not climbed Knapsack Pass. I mistook a teeny saddle for the pass and I was still in Palisade Basin, not Dusty Basin like I thought. I am glad that the instant that I got confused there was someone to help me. I know I could’ve figured it out on my own, but it was nice to talk it out with such a cool human.

So after thinking that I was done for the day, I looked up at the large pass looming above me and started my ascent. I tried to learn from my mistakes earlier in the day. I didn’t do anything (too) dangerous and turned around more often to find a better route. 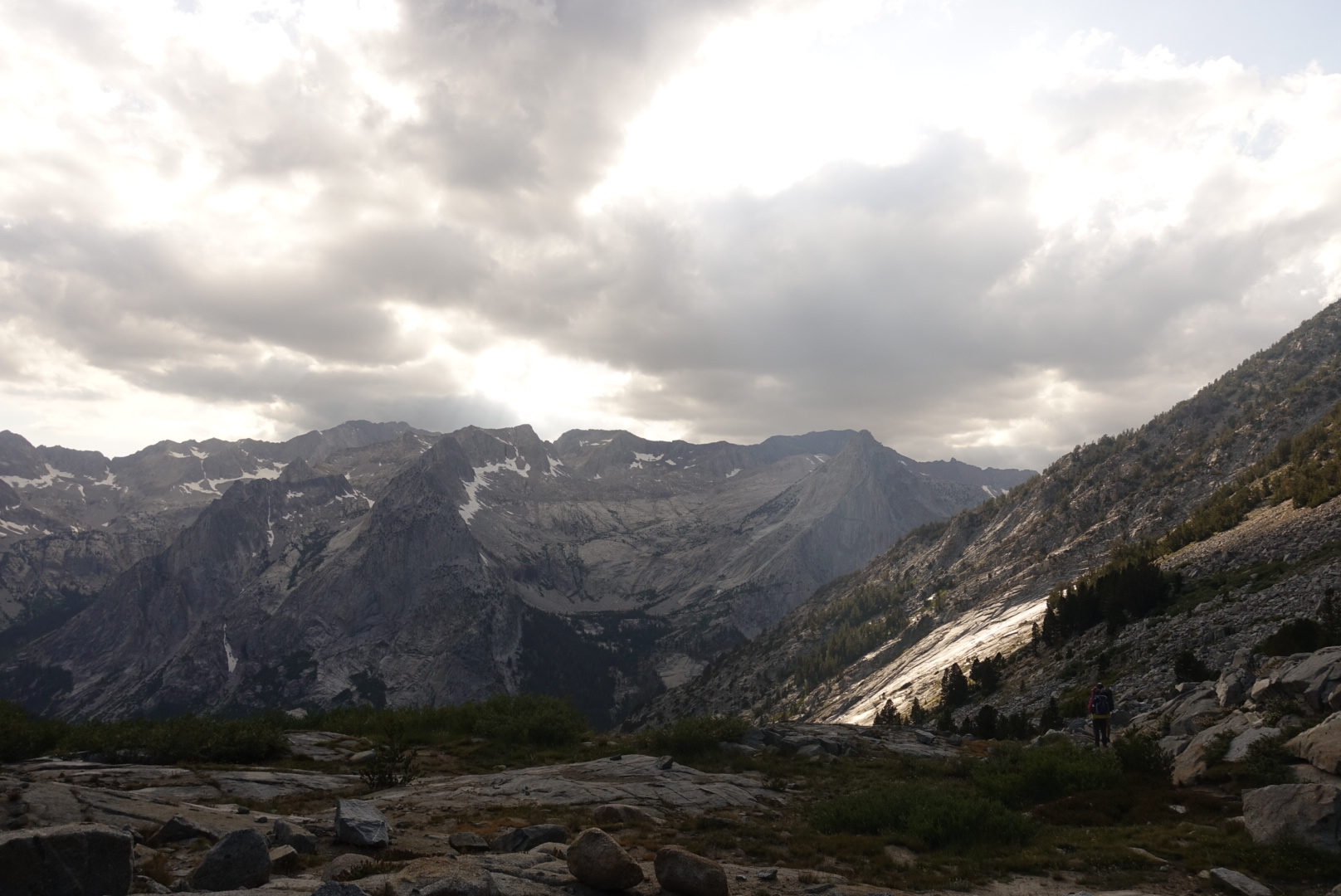 View from near the top of Knapsack Pass into Dusty Basin

I smiled at the top, I was done with the hard stuff for the day. Only some “straightforward class 2 route zigzags” downhill to trail left. Yet again, nothing was as easy as I thought it would be. The route finding was hard and took longer than I thought. I was tired. I was extremely sunburnt because I didn’t bring enough sunscreen to use on my legs. I wanted to be on trail.

I finally hit trail. I love trail. So predictable. So easy. I could finally put in my earbuds and zone out. I am currently listening to Harry Pottery book 4. Harry is about to face the Hungarian Horntail.

My body doesn’t feel great. I didn’t poop yesterday or today. Today I ate one oatmeal packet, one bar, miso soup, and ramen. Yet another day of under 1000 calories. I just don’t feel like eating. My tummy is rumbling while I hike, but I just can’t manage to want to eat. This is very different from every other trip where I eat constantly. I even gained weight on the PCT.

All the articles say that once you do the Sierra High Route you can’t go back to the JMT, but I love the JMT! It’s social! The trail is there for you! You don’t have to wonder if you are going the right way! You don’t have to backtrack!