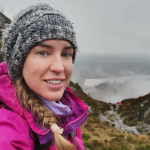 Sleeping with Giants in the Sierras

I’ve been fascinated, excited and scared of the High Sierras ever since I started planning my thru-hike of the Pacific Crest Trail. I read about snow conditions, snow equipment and the hazards involved with this section but I didn’t read much about the physicality of what I would actually be doing every day. I prepared myself for a high snow year by taking a snow skills course in Scotland and practising putting my tent up in the snow. I’ve been through countless pairs of gloves and clothing combinations in winter conditions in the UK to try and appease my raynaud hands and improve my ability to stay warm.

I was nervous for this Sierras section but soon realised I was better prepared then most and that this was a relatively low snow year. I entered the Sierras from Kennedy Meadows with my trail friends on 25th May, somewhat later than I had initially planned. This meant less snow would be around due to warmer temperatures but the snow that was left on the passes may give way to postholing which can be painful and extremely frustrating.

All perceived dangers aside, what I did not expect in the Sierras was to be constantly surrounded by the incredible beauty of huge snow capped mountains day after day and countless alpine lakes to break up the gravitas of the mountains. I know many people say this is a beautiful area but my British imagination was used to the lower lands of moors and Scottish munros. To walk every day over a high pass and be presented with even more mountains has blown my mind, I still don’t think it has sunk in. I previously imagined myself in the Sierras battling with snow and wind, struggling to find a comfortable space to camp. Yet there I was enjoying wonderful sunny weather while walking ontop of crisp snow and finding perfect spots for cowboy camping high up overlooking crystal clear alpine lakes.

The level of snow was just enough to challenge me yet never too much to make me feel unsafe. Peoples perception of risk on the mountains is a subjective concept, yes there are real dangers out there but some people are comfortable hiking alone in trainers and hiking poles while others prefer boots, crampons and an ice axe. I personally liked to use my ice axe as a walking pole with occasional use of microspikes on my trail running trainers. I have also enjoyed glisaiding down the other side of mountain passes using my ice axe as a paddle, brake or for steering. For me, the snow has been fun and I have been fortunate to share the traverses with some wonderful trail friends.

Something else I hadn’t read about or given much thought to was the increased elevation leading to some side effects on the body at altitude. Each pass is 9,000 – 13,000 feet high. We climb up and back down to the valley every day, often down to 8,000 feet. I’ve experienced fatigue, shortness of breath, dizziness and nausea. My symptoms are not uncommon amongst other hikers either. I’ve taken the Sierras easy when I’ve needed to, opting to choose a camp spot miles earlier than most of my group which has resulted in finding some wonderful isolated locations to sleep off the trail and away from the normal suggested spots. Sleeping above a crystal clear alpine lake, surrounded by giant snow capped mountains with the stars twinkling felt like a dream that I was yet to wake up from.

The mosquitoes had not yet horded as they were to do later in this section, so I was able to continue my streak of cow boy camping unaffected by the nuisance of bites. I also found myself walking with Pixar, a guy I had met at the start of the PCT that I continued to cross paths with ever since. Most of my group were ahead a few miles, seemingly unaffected by the change of altitude. Meanwhile we would often feel like the only people in the Sierras after not seeing anyone for hours. Such a contrast to the busier desert section where it would be harder to sleep away from other hikers.

Snow in sunshine without any urgency to cross is a complete joy as we took each day as it came. Most hikers preferred to cross over the passes early in the day to have firmer snow to walk on, Pixar and I didn’t stick to any early morning plans like this, despite attempts. I had lost my appetite, I wasn’t eating enough and had low energy levels so we made it up the passes at a time that was often late in the day. 1 mile took an hour over snow around 6pm heading up Muir Pass due to the difficulty of walking in soft deep snow. We called it a day on this occasion and scrambled up a rock face to find a snow free camping spot. We did make it up to Muir Pass early the next day to discover the rest of my trail friends had left a paper note for us in the Muir Hut.

We tackled the Sierra Nevada mountains in sections, this section finished in Vermillion Valley Resort where we were able to meet up with the rest of our trail friends and continued to walk together to Mammoth Lakes. Life moves on, more miles need to be covered leaving the high passes of the Sierras behind us as though it was just a dream.

Hello, I'm Emily, I love being outside in the mountains, hiking and wild camping. I also love sharing my experiences to help inspire others to do the same! I'll be thru-hiking the PCT this year, it's been a 9 year dream that has finally become reality. When i'm not thinking about hiking i'm thinking about Dim Sum which has been the focus of my career, I'm taking a break from Dim Sum while I thru-hike.