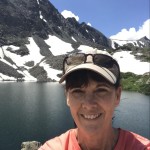 I had the bright idea that we could hike the Smoky Mountain National Park section of the AT straight through. Most Thru-hikers stop at Newfound Gap and take a shuttle into Gatlinburg to resupply. This way they can carry three or four days of food instead of seven. I decided I did not want to spend the time going to town, had sufficient resupply from the gas station in Fontana Village and was up for the challenge. And a challenge it was! 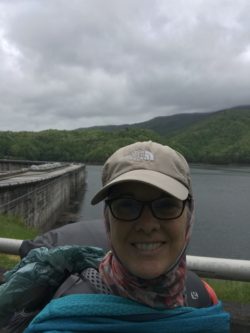 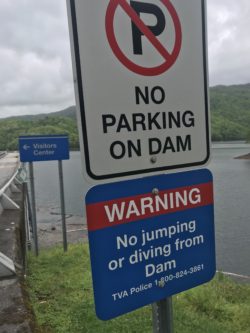 We started across Fontana Dam in dry weather but with overcast skies. As usual the beginning of the day was uphill. We passed a blue trail intersection, that we later learned was the offshoot to the Shuckstack fire tower. It is supposed to offer amazing views, but we were walking through a cold fog so there were no views to be had. In SMNP you are required to camp in (or near during Covid) the shelters or in a campsite called Birch Spring. By the time our group arrived at Mollies Ridge Shelter it was raining. I picked a space on the upper deck and put out my Tyvek ground cloth and my sleeping pad to save my place. I also laid out my sleeping bag so the down could loft up for better warmth. Then I crossed my fingers that the section hikers that could arrive and (per the rules) displace thru-hikers to the tenting area, would not show up. They didn’t. I spent a slightly sleepless, but dry, night listening to people squirm on their noisy sleeping pads and snore. 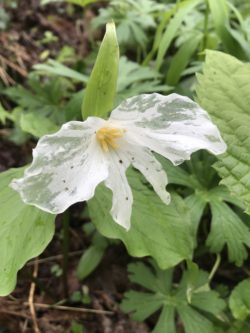 The next say our group hiked another 12 miles to Derrick Knob Shelter. That evening Guy Pilote, trail name Bimbo, shared his story with us. A former police officer and firefighter from Maine, Guy suffered a severe left hemisphere ischemic stroke after a short run in 2014. Despite his being a physically fit 49 year old, Guy’s family was told that the damage was severe and that he may never get back the ability to talk, use his right arm or even walk. 400 AT miles later, Guy has largely proven them wrong! He told his story and brought a bunch of trail toughened hikers to tears. He may have difficulty finding words but he has no trouble conveying his message. He is raising awareness and money for the Maine chapter of the Brain Injury Association of America as he hikes his way back home. Guy is just one of the outstanding people I have met so far on this trek. I will share another amazing story in my next blog. 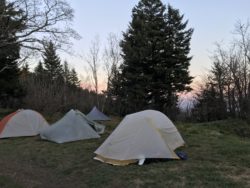 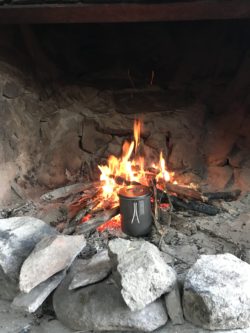 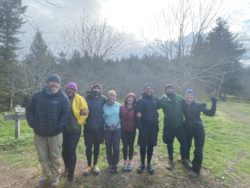 Since we had been averaging eight or nine mile days to this point, the Smokies proved challenging due to the distance between shelters and the fact that one was closed due to aggressive bear activity. DC decided he did not want to hike over Clingman’s Dome, the highest point on the AT,  and go 13 miles to Mt. Collins shelter. Instead we split from our group and hiked to Double Spring Gap shelter which was only 7.4 miles for the day. When we arrived there DC grabbed a spot in the shelter and I set up my tent. We were joined shortly by a Ridge Runner (trail name Jimmy Legs) who informed us that all the other spaces in the shelter were permitted for section hikers if they came. A few did, but there was room for everyone who wanted it. I spent the afternoon collecting firewood and keeping a fire going in the shelter fireplace. It was so nice to have some warmth especially in the early morning! It went down to the low 30s that night. The cold temps mean that you sleep with all of your battery powered things and your Sawyer water filter to keep it from freezing. Here is a list of everything that is inside my sleeping bag on cold nights: me, sleeping bag liner, sleeping bag stuff sack with my puffy in it (pillow), iPhone, Ankor Battery pack, Sawyer water filter with CNOC, headlamp, In-Reach GPS device, the clothes I wore that day to ‘dry’ them – or at least keep them from getting damper- along with gloves and my beanie for added warmth if necessary. I have a 15 degree down bag paired with a Thermarest Neo Air Xtherm pad and a liner. I was warm but only with the beanie on and the drawstring pulled tight around my face. The biggest issue with my sleep system is turning over without landing on top of something hard or making loud clunking noises. 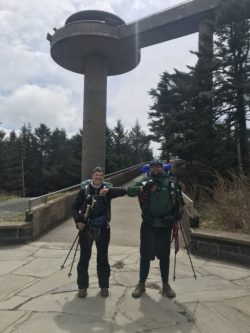 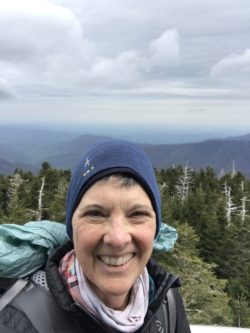 Clingman’s Dome has two significant milestones associated with it for thru hikers. First, it marks the 200th mile for NOBO hikers. Second, at 6612ft it is the highest point on the Appalachian Trail. From Double Spring Gap shelter we only had 2.8 miles to reach the summit. We managed to turn that into about 4 miles when we accidentally took the bypass trail and had to backtrack to the summit. For once the weather was cooperative and we had forever views. We celebrated, took pictures with other Thru hikers and answered a lot of questions thrown at us by the folks who had driven to the top of the mountain. Then we got back on the trail and headed for Ice Water Spring Shelter another 10.8 miles away.

Ice Water Spring shelter was crowded with thru hikers and reeked of weed. We decided to join some friends in setting up our tents uphill from the shelter. I went to the shelter to cook my dinner and was disappointed to witness the unfriendly welcome given to some section hikers who came in. All but one chose to tent even though their permits gave them priority for shelter space. Given that the thru hikers had taken over most of the space, were burning the ends of huge logs in the fireplace and otherwise showing little regard for the rules or their fellow hikers, who could blame them. 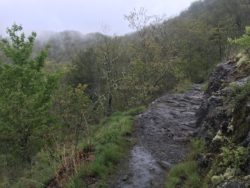 The closed shelter meant that a minimum 15 mile hike would be required to skip that one. It also meant that everyone intended to stop at Tri-corner Knob shelter as it was last in line before the closed Cosby Knob shelter. The weather was also forecast to continue to be wet and cold so shelter space would be at a premium. We arose early, ate a minimal breakfast and set out for Tri-corner knob shelter post haste. We arrived in plenty of time to capture a corner of the lower level. By hiker midnight (8pm) we were shoulder to shoulder with section and thru hikers alike as the rain pounded the metal roof. 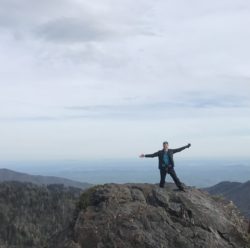 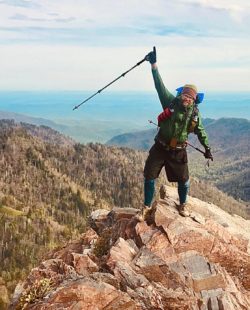 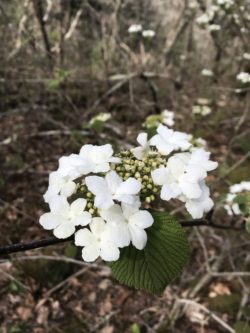 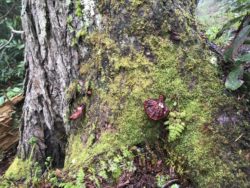 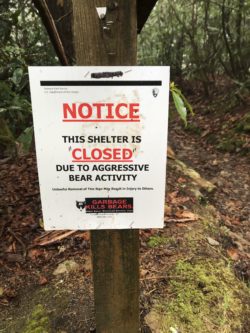 The next morning the rain became intermittent and then finally stopped. We set out on the longest day yet with full packs. We intended to complete 17 miles and get a shuttle into Newport, TN where I had made a reservation at a hotel.

The first stop, just past the shelter was Charlie’s Bunion. This rock formation makes for some dramatic poses if you are okay with heights. DC was way more comfortable then I was as you can see by our pictures!

Once again, the clouds surrounded us making a stop at the Mt. Cammerer fire tower less appealing. We chose to pass on the half mile blue access trail. The last few miles brought us down to lower elevations and clearing skies. We stripped off all our extra layers and exhausted but smiling met up with our shuttle driver. The Smokies were behind us. We had done 71 miles in six days in the highest elevations of the trail and in cold, wet weather carrying heavy packs. We were becoming thru-hikers!

I live in the Boulder, CO area where I enjoy hiking on our many Open Space trails. I live with my husband of 33 years in a too empty nest, since our daughters have flown the coop. One is studying fashion design and living the good life in Southern California and the other is attending Medical school in Philadelphia. I work PRN as an Ultrasound Tech which leaves me plenty of time to pursue my passions of traveling and enjoying nature - especially wildlife sightings. I will be going NOBO on the Appalachian Trail in 2020. (Make that 2021!) I hope to ‘celebrate’ my SIXTY FIRST birthday somewhere along the trail in late June. See you in the woods!