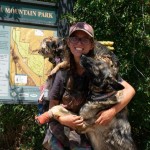 After our struggles in the Weminuches, conditions slowly improved on the way south…

After resupplying from our food cache, we hiked through Wolf Creek Ski area. While you don’t get to hike on the runs, like at Monarch and Copper Mountain, it is still fun to see the lifts and the views of the South San Juans are fantastic!

The trail drops down into the trees and most of the day is spent traversing around and on low ridges. However, I personally found many of the grassy knolls to be quite scenic, particularly close to Elwood Pass.

It was a bit creepy how quiet it was on the trail in that section as the trail was obviously well built for the most part. We did see 2 day hikers and 2 CDT NOBO hikers.

This was the crux of the segment as far as snow was concerned. The route climbed up under Montezuma and Summit Mountains before traversing across 3 basins. While there were many patches of snow, only a handful were particularly dangerous.

The views were fantastic and the basin hiking, though the south/uphill sides tended to be snowier for us.

The last uphill out of the last basin was especially snowy and steep. After making it over the top, we pushed on to Blue Lake and set up camp around 8 pm. A 22 mile day for the dogs!

That day we saw 2 pairs of CDT hikers and 2 NOBO section hikers.

After the big day before, we were all a bit slow. We set out pretty close behind some weekend backpackers who also camped by the lake. The walking was quite scenic with the interesting geography of the area. I don’t know how to adequately describe it other than giant, long barrow-like hills all in a row.

Around Trail Lake I had a nice discussion with a NOBO CDT hiker and later had another nice talk with a weekend backpacker. This was the first day in some time that the clouds built like rain or thunderstorms were coming.

The trail rolled over some rocky, alpine hills down to Dripping Lakes. After having Mac and cheese for lunch, we walked about 30 minutes down the hill and ended up camping at the lakes. The dogs were a bit sore and needed the afternoon off.

Fortunately, the lakes were a beautiful place to camp, save for the mosquitoes. I spent time reading and hanging out.

On this day I had a big hankering to get to Cumbres Pass and my resupply. We had a nice, solitary walk with great views back the way we came. We also saw lots of Elk.

The views from the prominent point before dropping down were lovely. Unfortunately, things warmed up quite a bit the closer we got to the pass. Since there were streams, I was finally able to use the Ruffwear Cool Coats I had been carrying on the dogs.

With a light back, thunderstorms rolling in, and food at the pass I had a good pace set. We got to Cumbres Pass around 1 or 2 pm. I hurriedly attempted to set up the tent before the storm, but was about 5 minutes to late. Everything got wet! In the character of the Rockies, the storm let up within 15-20 minutes. We would have been better off hiding under the umbrella.

Fortunately, I was able to dry everything, move to a more ideal campsite, and fetch the cache boxes. Just in time! Another thunderstorm rolled through.

The dogs finally started showing more wear and tear. Both dogs were mildly sore at times, though Skittles was the one who limped. Luckily, booties made a big difference for her and she also got a free ride a few times.

Prima has started to look a bit thin and doesn’t carry her pack anymore. I try to share my food with her when possible.

So far, food caching has been working really well. I haven’t had any problems finding them and they have been untouched.

The biggest complaint is that I’ve finally become hungry and it’s a bit disappointing to see the lack of food in the box.

Note: I’ll update with pictures after finishing the hike

Dogs and thru-hiking, what could possibly go wrong?