I love waking to a different, beautiful view at each campsite. This morning the rain fly had a little dew so we set it in the sun to dry. For breakfast, I had enough water for a matcha tea latte in addition to my daily oats. I am enjoying the butter powder I added to my oatmeal and will use it on future trips.

Similar to yesterday, the trail traveled up and down. However, all of us preferred today’s terrain. The ridges were open instead of thick with vegetation. I was fascinated by the forest, a mix of oak, pine, and an unfamiliar tree species. There were also ferns and many wildflowers. Jenessa found a patch of wild strawberries and picked six to share. At the top of our climb, we glimpsed Bear Butte in the distance! We stopped for lunch, excited by our progress. 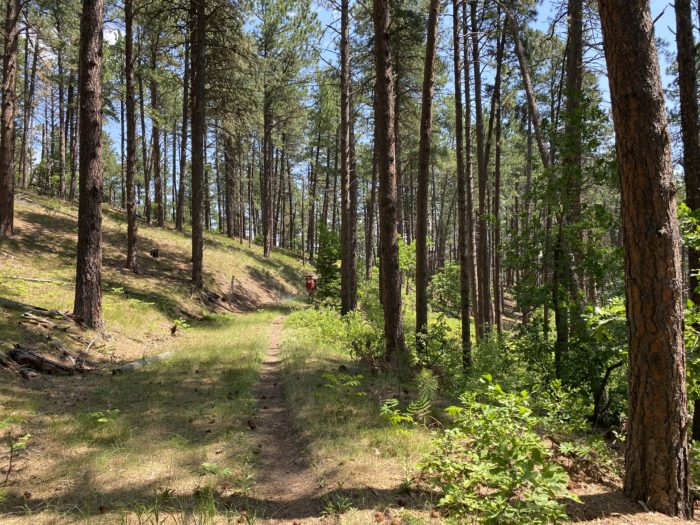 The trail dropped for the most part on our way to I-90, which we crossed via a tunnel. Alkali Creek was dry so we stopped at the campground to refill our containers from a water fountain. We also dumped our trash. Campgrounds sure make the trail luxurious! From there we continued on to BLM land and another hill climb far above I-90. Any progress we make today means a shorter final day! 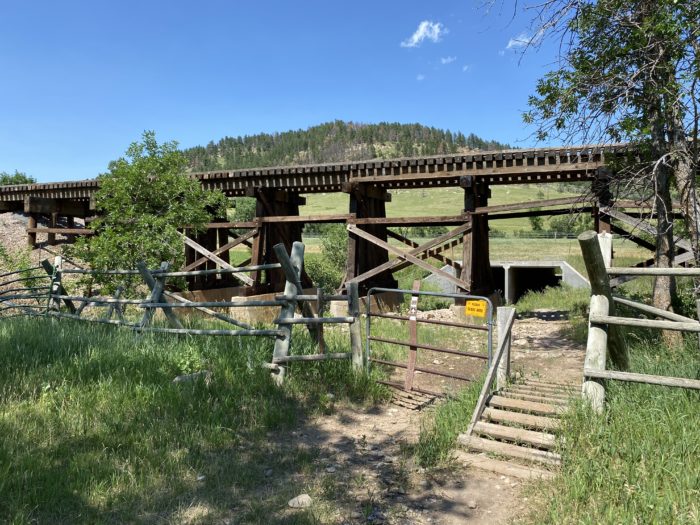 Eventually we stopped to make camp on a ridge overlooking Ft. Meade. I liked the view plus I saw a wild turkey in the spot, which is a good omen.

We placed our tents right next to the trail because on the Centennial so few people go by. Then a bicycle race of over 100 bikes sped by our camp over the course of the next hour. Ha ha, every day is an adventure on this trail! I had fun cheering people on as I organized camp and prepared dinner. Some of the riders conversed with us as well. A short time after the race finished, dark clouds appeared in the distance. We stowed our gear in the tent vestibules, then climbed inside. Thunder rolled, rain fell, and lightning lit the tent walls. It was over quickly.

Our final day on the trail! We got our earliest start of the trek, excited and eager to reach the butte before the hottest part of the day. After walking less than a mile through forest, we ran into a pair of thru-hikers, the first we saw on the trail. They asked us about the water situation at Elk Creek. I liked seeing other thru-hikers. I also enjoyed the next meadow where a bunch of dragonflies zoomed through the air, hopefully eating mosquitoes.

We took a tunnel under the next road and into the Ft. Meade recreation area, which was flat, easy walking across open grassland. Bear Butte tantalized us in the distance. A prairie dog community chattered as we hiked by and a deer bounced away, crossing under a fence. Soon there were a few gates to open and cattle in the distance. We descended into a valley then up to Bear Butte Lake. A mowed path through the grass circled around the lake. Our pace was faster than usual, fueled by excitement and the flattest stretches of the entire trail. A final road crossing took us into Bear Butte State park. I was happy to see a group of buffalo!

When we reached the visitor center parking lot, we ate half our lunch and filled our water bladders. It was not yet noon and there was a slight coolness to the breeze. We kept our backpacks on for the ascent, though Jenessa had threatened to leave hers in the car. (I keep telling her she’s a badass!) The butte trail rises 1,000 feet over 1.5 to 2 miles. It was easier than I envisioned due to a well-developed, switchback filled trail. I also thought we would be the only ones ascending in the heat of the day but there were many people. 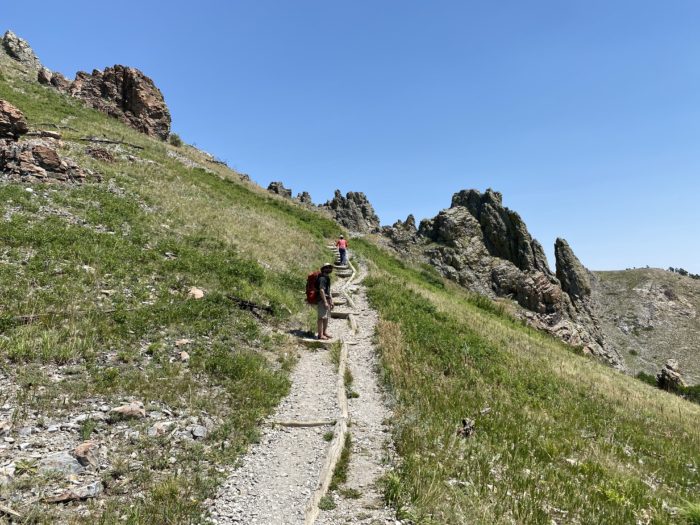 Shortly before 1 pm we reached the top, which turned out to be a large wooden platform. Yay, we walked 123 miles across South Dakota!!!! We celebrated by having the second half of our lunch in the shade of the only tree. Victory made it taste so good! It was my second completed thru-hike and the first for Jenessa and Mike. 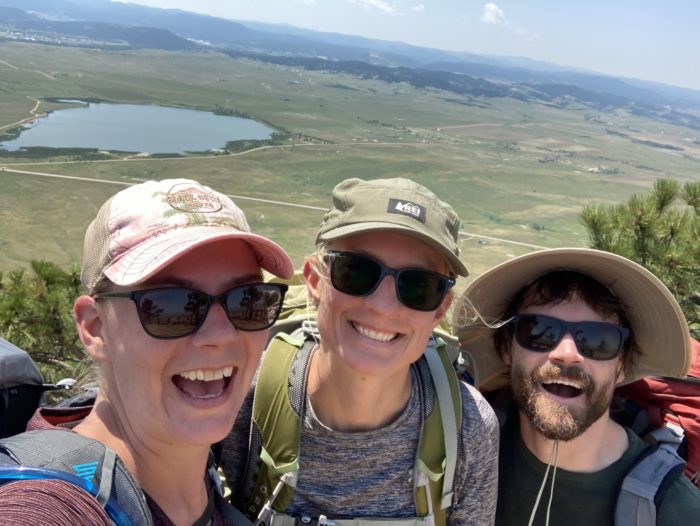 Once we descended the mountain, the first thing I did was put on my Teva sandals. We drove to Bear Butte Lake. Jenessa and Mike took a quick dip while I put on clean clothes. We snacked in the shade of a tree and played the card games Love Letter and Whist. In the early evening we got Indian food in Rapid City on our way to get my car.