Honoring Stronghold, and a Life Well Lived on the Appalachian Trail

By all accounts, Ronald “Stronghold” Sanchez Jr. was where he wanted to be: Hiking the Appalachian Trail and trying to put years of post-Iraq War trauma behind him.

“He was adventurous and he got out of his shell and we were so proud of that because for a while he was in darkness,” his sister, Brenda Sanchez Loera, told CNN. 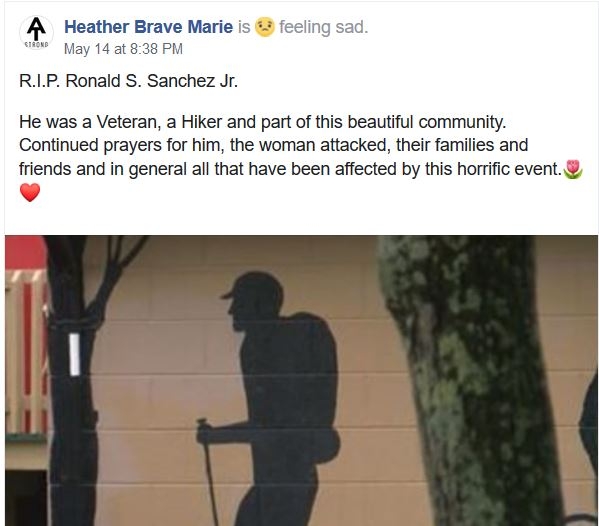 Sanchez, 43, who was given the trail name Stronghold because of his military background, served 16 years in the Army—with three tours in Iraq—and battled depression and post-traumatic stress disorder that confined him for years to his house in Oklahoma City.

Then the fog began lifting. He took up hiking. Bicycling. Horseback riding.

And this year, he began hiking the Appalachian Trail.

But that challenge didn’t come easy either. Knee and shoulder injuries from his Army service forced him off the trail twice.

‘‘If you get discouraged, it’s hard to come back from that,’’ Colin Gooder, who persuaded Stronghold to take a break and work for him at his Gooder Grove Adventure Hostel in North Carolina, told the Washington Post.

‘‘When I first started operating a hostel, there were a number of veterans that came through that were trying to heal wounds,’’ Gooder told the Post. ‘‘The trail helps them heal. Nature deserves all the credit for that.’’ 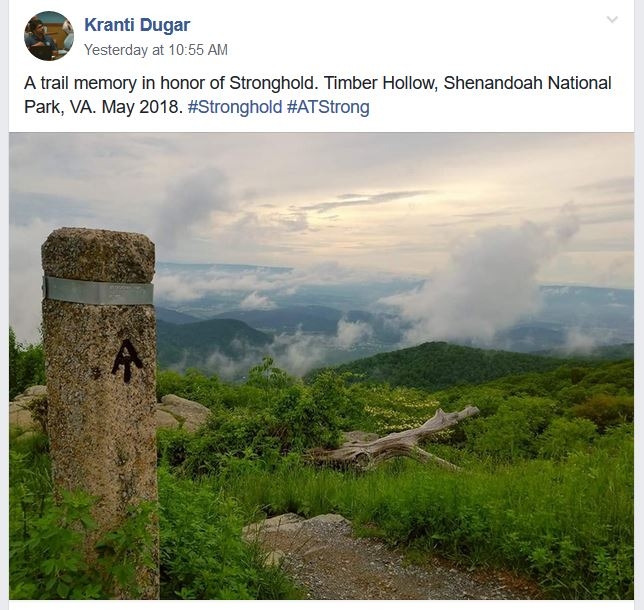 Stronghold, who died May 11 in a savage attack on the trail in Virginia, left an impression on those who met him.

“There was no sight better seen at the end of your day than Stronghold waiting at camp to greet everyone with a warm smile,” J. Hedges told The Trek in an email. “He was the real MVP. This world needs more people like Ron. … May his life live on through the love of everyone everywhere. He named my pup Fetch because no matter the day’s turmoil he always knew Fetch would be there to run a stick for him no matter how tired they where… he was a wonderful man.”

Fellow hiker Bob Walker posted on the Hiker Yearbook’s Facebook page: “He only had positive things to say about others and openly shared about the challenges he faced in his life. He freely spoke of his love for his girlfriend and her children and his hopes to do good things in this world. I have no real knowledge of how the attack transpired but I know in my gut that he must have thrown himself in front of the other injured hiker and taken the brunt of the attack. I’m sure that is something he would do.” 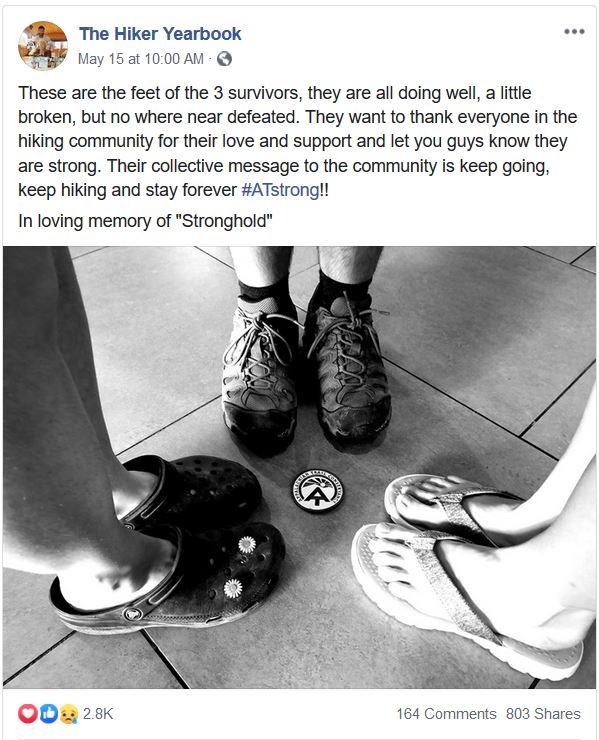 A woman injured in the attack and two other hikers who fled the attacker have not been identified.

In the aftermath of the tragedy, Facebook has been flooded with tributes. A memorial service was held May 16 at Trail Days in Damascus, VA.

“Took a day hike in my neck of the woods in memory of #stronghold, love, peace, and harmony to all! Made a fire in his memory #loveandbeloved,” Carla West Greer posted on Facebook.

Meanwhile, on the trail, thru-hikers are grappling with Stronghold’s death, but appear dedicated to finishing their hikes.

And perhaps that’s how Stronghold would have wanted it.