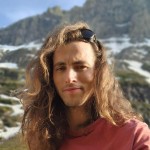 (This post is brought to you late, mostly unedited, straight from my personal blog. I was brought on a little late, so I need to catch everyone up. There are a few references to past adventures and posts that may require some context. You can check out my old adventures at jacktracyadventures.com, but from here on, I will be posting a majority of my content here.) Setting off from the Greensboro train station. (Featuring, grocery bag full of avacados and trail mix.)

A piece of sound advice for anyone traveling; don’t get the uber-spicy wings the night before you board a train for three days. I sat in that little closet restroom, my life essence being drained out of me as I braced my feet against the walls to keep myself from being thrown from the toilet seat, and I thought to myself, “man, this would be a silly place to die, were the train to derail right now. How embarrassing that would be.” And after several trips, “it would be a hilarious way to die, though.” The moral of the story is that eating excessively spicy foods the day before your train trip increases the probability of you dying an immodest death. Do with that information what you will.

So, yeah, three days on the train. Two transfers. The one in DC is already out of the way. Though, I’ll be writing this update over the three days, so Chicago will be out of the way soon enough. I’m just hoping the conductors continue to ignore the presence of the big, pointy ice axe strapped to the outside of my pack. I am constantly worried I’m going to turn and some idiot is going to bump me and impale themselves. Only happy thoughts on this journey. I blame a lack of sleep.

Speaking of happy thoughts, there is still a dumb, dumb, dumb amount of snow in Glacier National Park, or so I’ve heard. I haven’t actually checked the snow report in a few days, but last time I checked they had a 10 foot deep snowpack at 6,700 feet and the seasonal snowfall was 130% the average. I’m starting a bit early, about as early as you would possibly want to start, especially in these conditions, and alone, because that’s just how I roll, I guess. My wilderness EMT training that has all but evaporated from my brain cells probably won’t offer me much help if I’m buried alive by a snow shelf breaking off above me. I’ll be watching some avalanche readiness videos in my copious amounts of spare time.

Make Sure You See the Sights 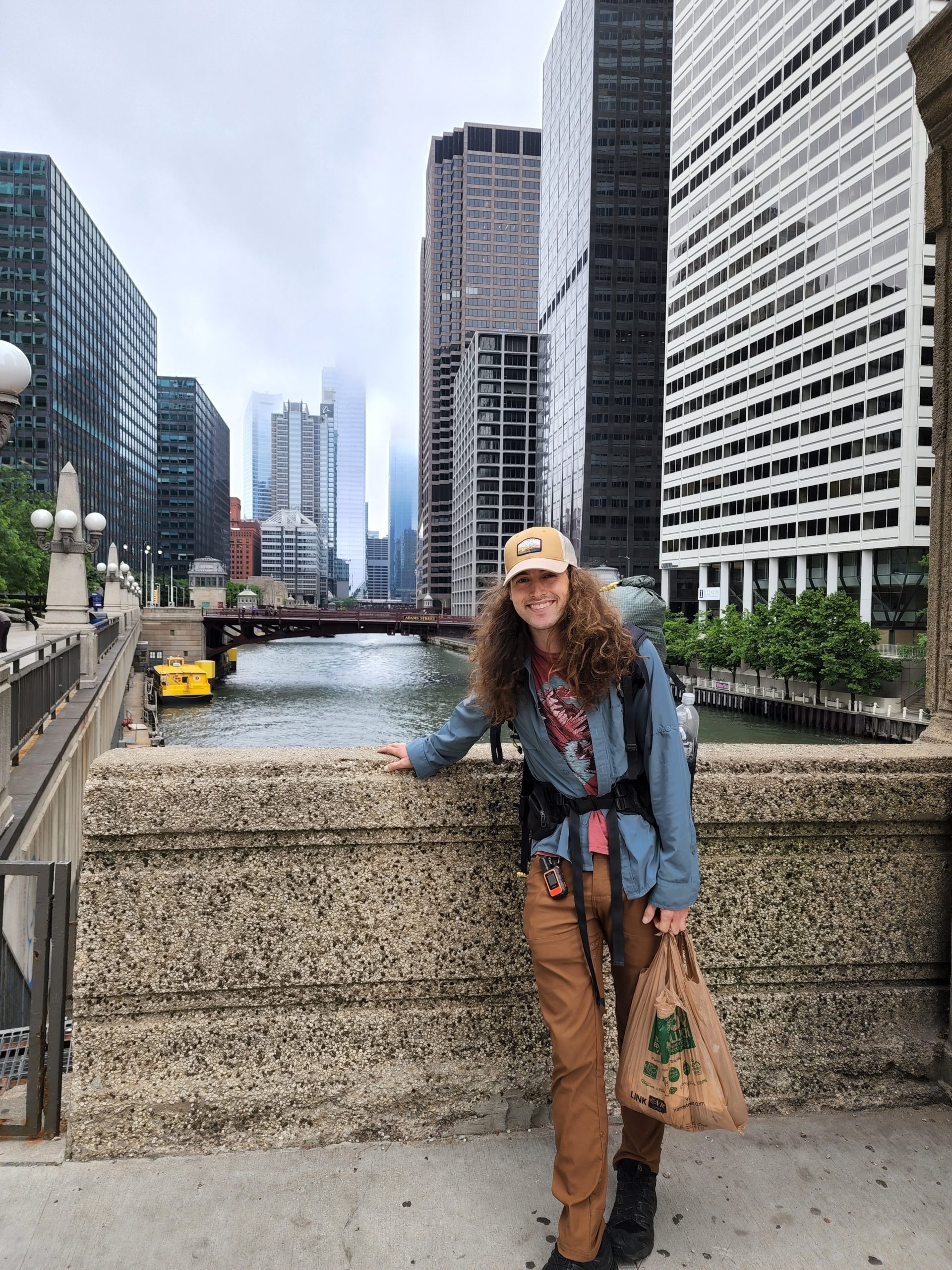 Seeing the sights in Chicago. (Featuring, grocery bag of avacados and trail mix.)

The transfer in Chicago had a six hour layover. My cousin Anna had just moved out there from Raleigh, so I took the opportunity to visit with her. As we walked back along the Chicago River I spotted a dirty mustached fellow walking amongst the terraced steps. That would be a rude description, but he sported a worn Hyperlight pack and a pair of Altras, so there was no doubt in my mind of this man’s purpose. He saw me as I saw him and he came towards me.

“Heading to Glacier?” I asked, already sure of the answer.

“I saw the pack and the ice axe and figured, ‘this guy isn’t here to visit Chicago,” he said.

“Altras and a dirty Hyperlight,” I told him. He nodded in understanding. “You on the train at two o’clock?” I asked.

Otherwise, train travel, way more comfortable than flying. Lots of foot space, 70% chance of getting your own seat, outlets in the wall, actual food and not just those dumb pretzel packets with 5 pretzels in them. I mean, only $8.50 for an IPA, what more could you ask for? Next time I’m springing for a sleeper car so I can pass the heck out. Last night, Jared my new train friend, and I were talking about the sleepers after a long day of sitting and talking about frugality and adventuring.

“Yes, among other reasons, Jared replied.

Our other new friend, JT, had a similar epiphany last night. This morning as he sat in the observation car, him and an old man were speaking about the trip.

“I love riding the train.” So said the old man. “I just get the best night sleep.”

JT’s response, which I can only imagine was dry as can be. “You have a sleeper car, don’t you?”

The old man did, of course.

At the time of writing this we are currently in North Dakota. It lacks trees, but the landscape is breathtakingly beautiful. Just rolling green hills as far as the eye can see. Every now and then I look out and wonder which hill I will claim for my hobbit burrow, a thought I have whenever I see a nice hill. A balanced thought, as all things should be. 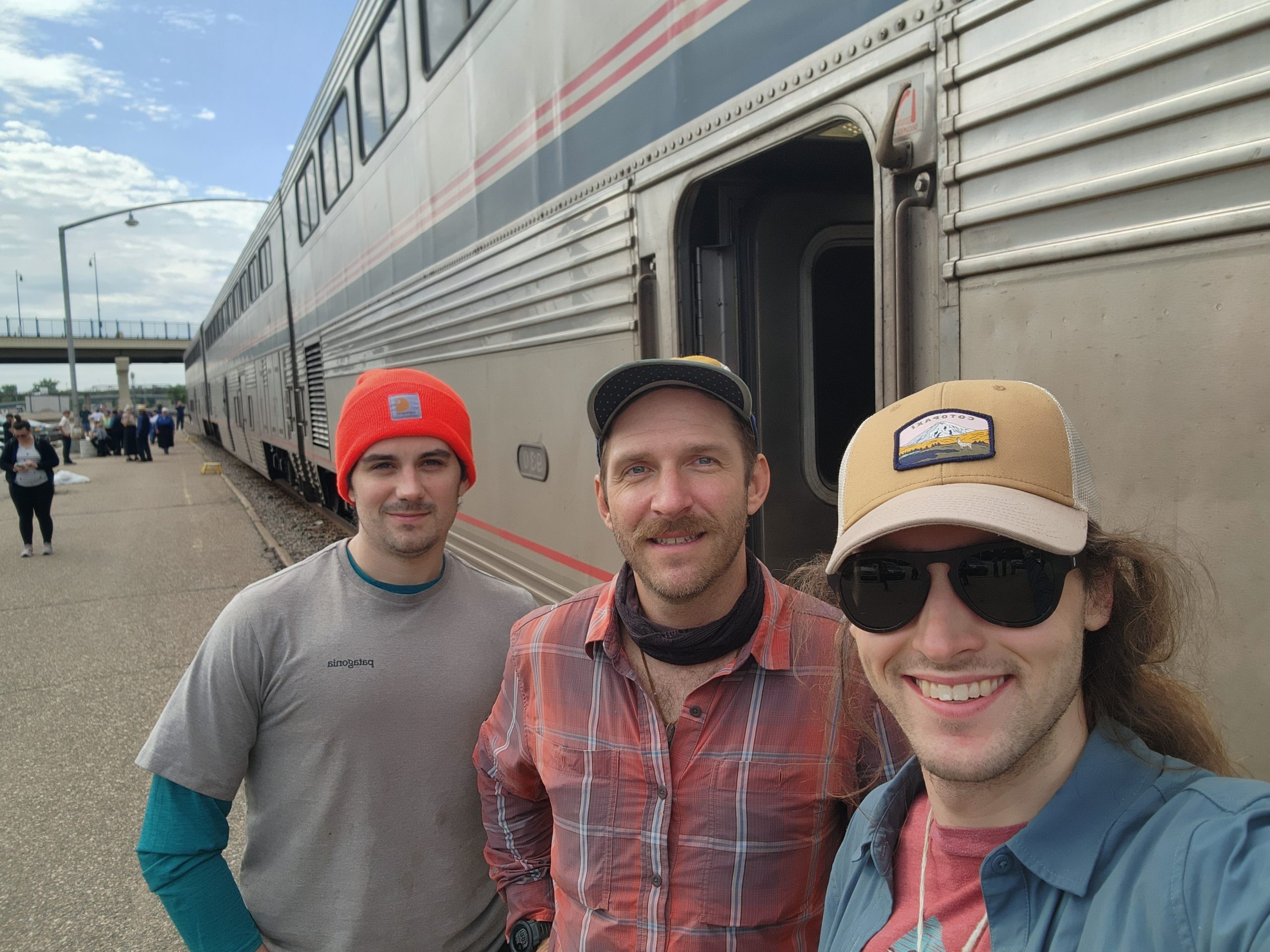 Get Some Work Done

This final leg of the journey is taking around 28 hours, Chicago to East Glacier. I’ve read about 200 pages of my book, started Stranger Things season 4, slept 5 hours, and emailed over a dozen companies about potential sponsorship opportunities. I’ve mostly been emailing gear companies. I can’t seem to find the email link for Mission Tortillas anywhere. A true shame.

Jared is a pretty interesting guy. He’s got a lot of travel stories that I have been enraptured by in our conversations. My favorite is hearing about hitch hiking down the Amazon river for a month and a half. He said he got stuck in a small village with some Germans and they ate nothing but sauce-less pasta and slightly overripe fruit for 2 weeks. All of this while on a 2 year trip hitchhiking across South America. To say that I have had new adventure ideas planted in my head…

You Are Almost There

In other news, weather says that Glacier National Park is about to get slammed with snow. Two feet over 7,000ft elevation and winds up to 60 mph. All on our start day. Jared and JT are heading south on the CDT, but we all planned on heading out to start walking on the 15th. We’ll see what the rangers have to say. They both are hoping for walk in permits, but with my itinerary already set and my permit approved, well, we’ll just see what happens. I only have 2 passes in the park where I rise over 4,500 feet. They do go up to 7,000, at least one of them does, but I can handle a slow slog through powder to do a 7 mile day. Another concern is river crossings, but again, we’ll just have to see what the rangers have to say when I go to get my permit. Supposedly, they remove bridges in the winter and have to reinstall them when the snow thaws.

I know I fell off on the blog posts last year, but have no fear. I plan to keep up with them both out on the PNT and on the TA later this year. I mean, absolutely no promises, but it’s fun to tell a story. Stay tuned and happy trails.

Just so everyone knows, there is a fully written 5,000 word conclusion post for the Hayduke. It is probably one of my more interesting stories and because of certain events I became doubtful of what I wanted to do with it. It definitely needs some editing, but at this point in time I still don’t know if I’m going to post it to the blog or send it to Outdoor Magazine or honestly just let it die and never touch it again. But it does exist, my self doubt prevented me from delivering it to you and for that I am sorry.

Hey! My name is Jack Tracy (24) and I'm a thru-hiker blogging for TheTrek. I've completed well in excess of 10k miles along the AT, PCT, CDT, HDT, MST, FT, and currently the Pacific Northwest Trail (PNT). My few joys in life are derived from science/fantasy fiction and walking really far for no discernable reason. I believe everyone has adventure in their hearts, and some of us see fit to bludgeon it to death with a stick. Others, choose to write.