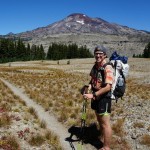 Woke up at trail angel Brenda’s house only to realize the power was still out from the storm the afternoon before. We had piled onto the couch with pillows and blankets galore, so the night went quick and comfortable.

We hung around until about 11, finishing up our laundry when the power finally kicked back on. Annie, Sheriff Woody’s girlfriend, gave us all a ride to the trailhead. Thunder boomed in the not far off distance, and we had a climb to 6000 feet to do. 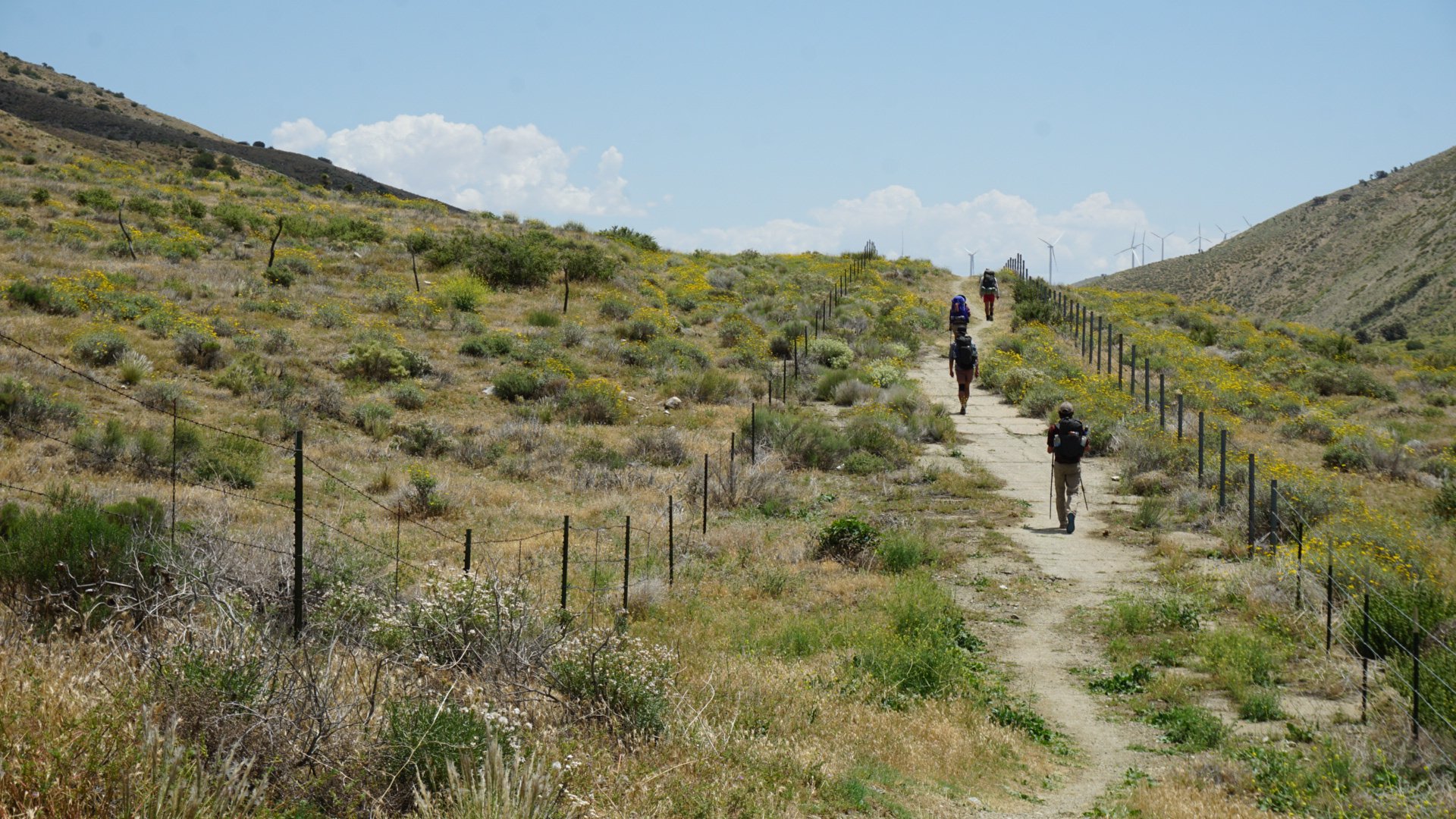 With a 32 pound pack filled with food and water, I climbed. My legs felt sluggish from the three days spent in town, but the climb went quick. In no time I was on the ridge, thunder on one side and bright sunshine on the other. After a quick debate we pushed forward into the storm. 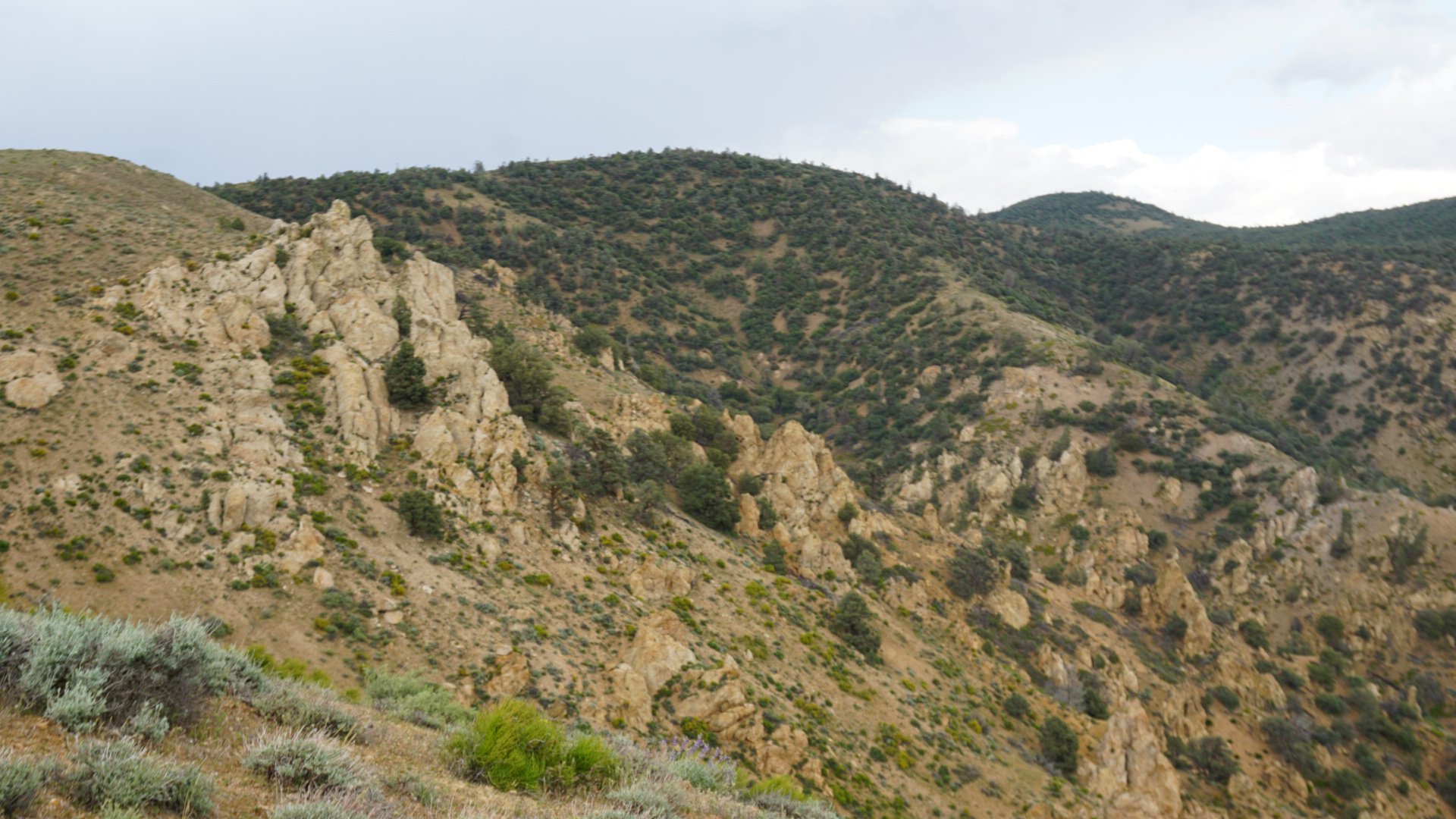 The ridge going into the storm.

Thankfully, no one was struck by lightning, and the rain mostly stayed on the ridge next to us. The day went fast, since we only went 14 miles. So when we rolled into our planned site at 5:30, our groggy town bodies decided to call it a day. 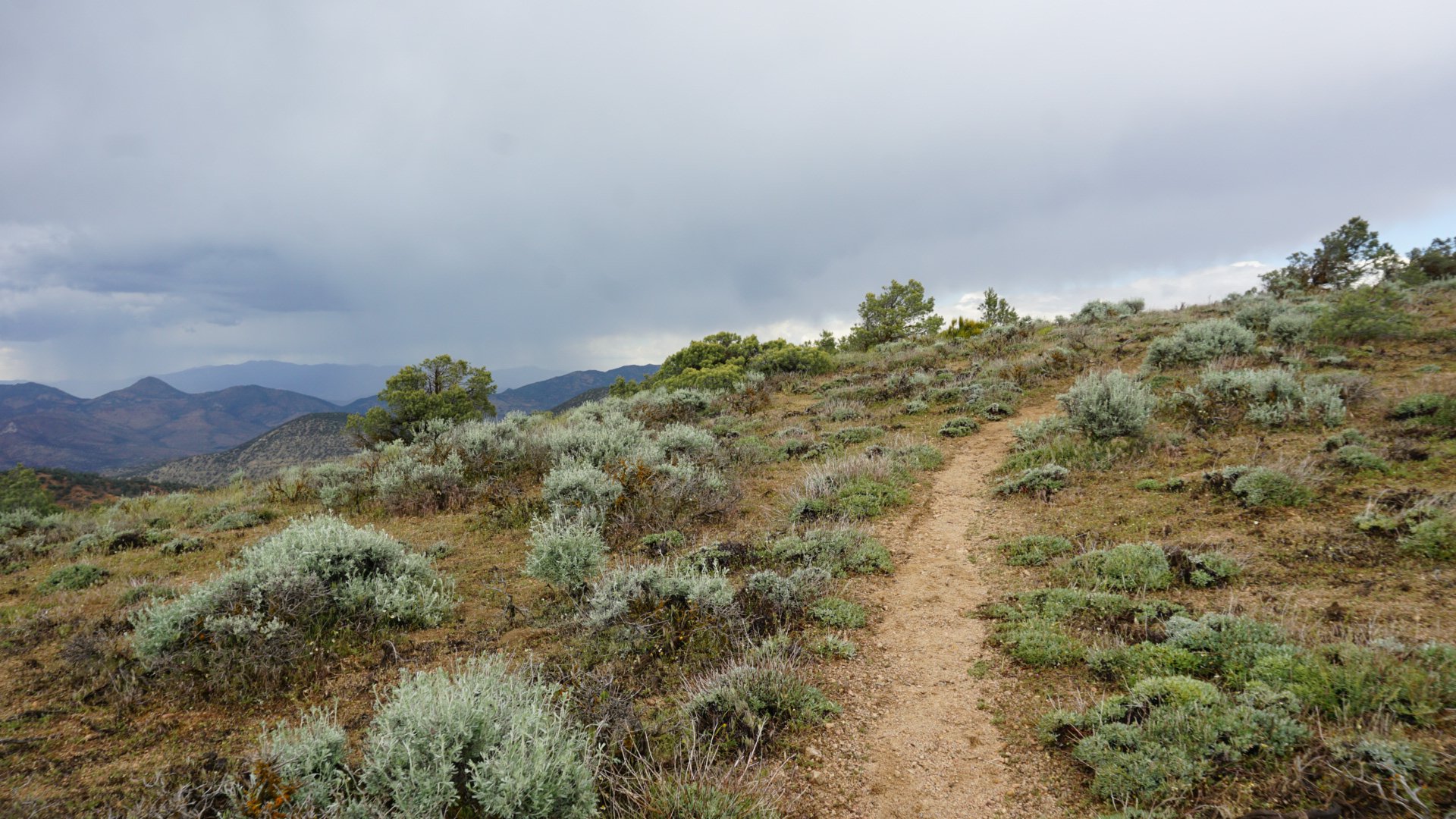 That wasn’t before I felt a sharp pain in the skin between my big toe and the one next to it, where my sandal strap lies. The dry skin I’d been nursing in tehachapi had cracked, and blood was slowly oozing out. It still hurt when I crawled into my tent, but I had hopes it would look better in the morning.

But it still hurt walking out of the tent. A throbbing pain kept me up most of the night, and I dreaded the coming morning walk. I layered large amounts of tape and love over my toe, and hoped for the best. 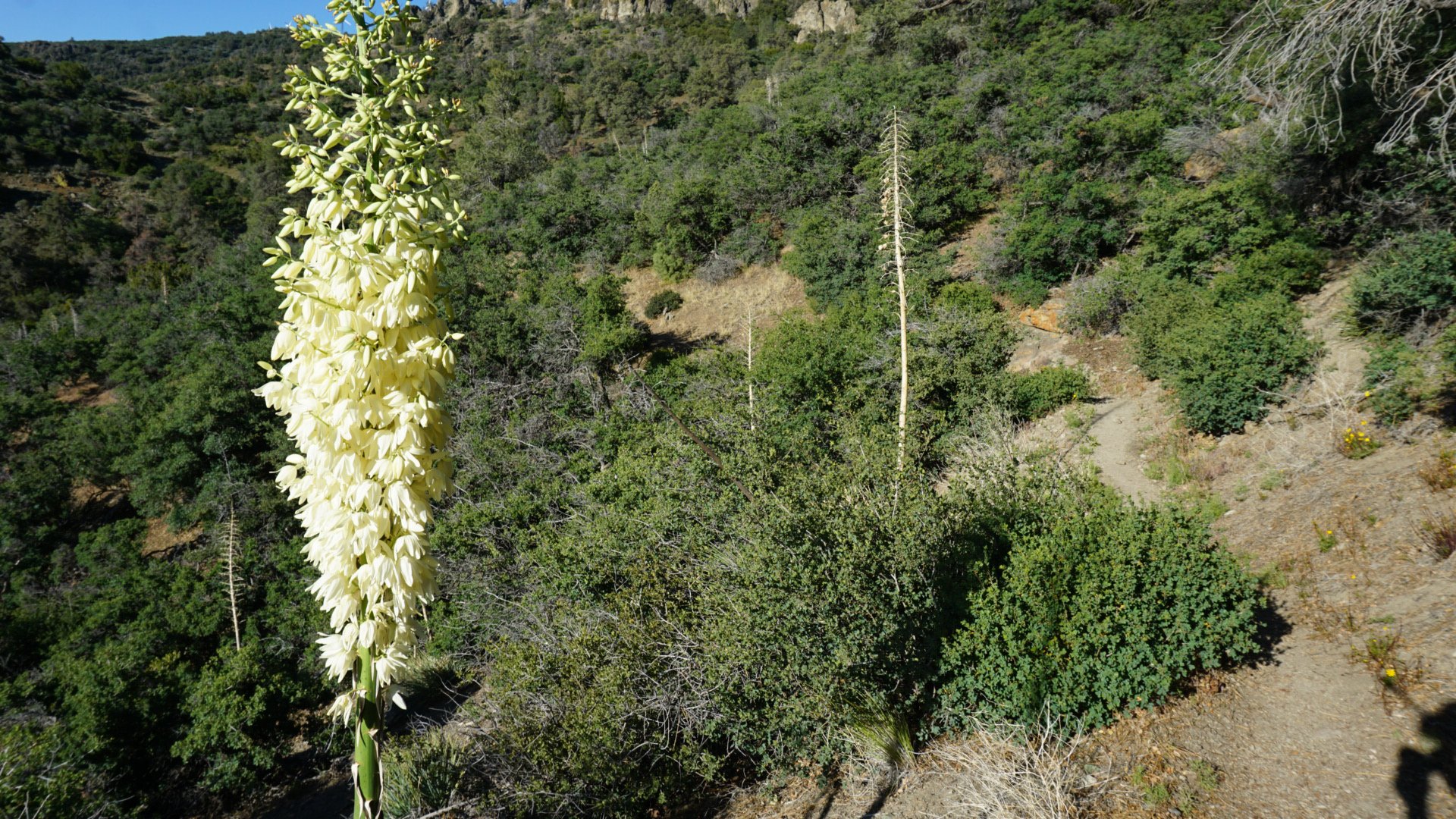 Not a bear, just a cool flower

The hobble was punctuated about 30 minutes in with a short bear encounter. I’d never seen a bear before, so this was pretty exciting. I was coming out of a ravine when I heard snapping down below. I looked down expecting to see a hiker, but saw a very large black bear.

I don’t think it noticed, as it kept ambling on, but it was cool nonetheless. I didn’t get a picture, since I didn’t want my first encounter to be a bad one. I kept walking on to the first water source. The path would wind through meadows and forest for most of the day. 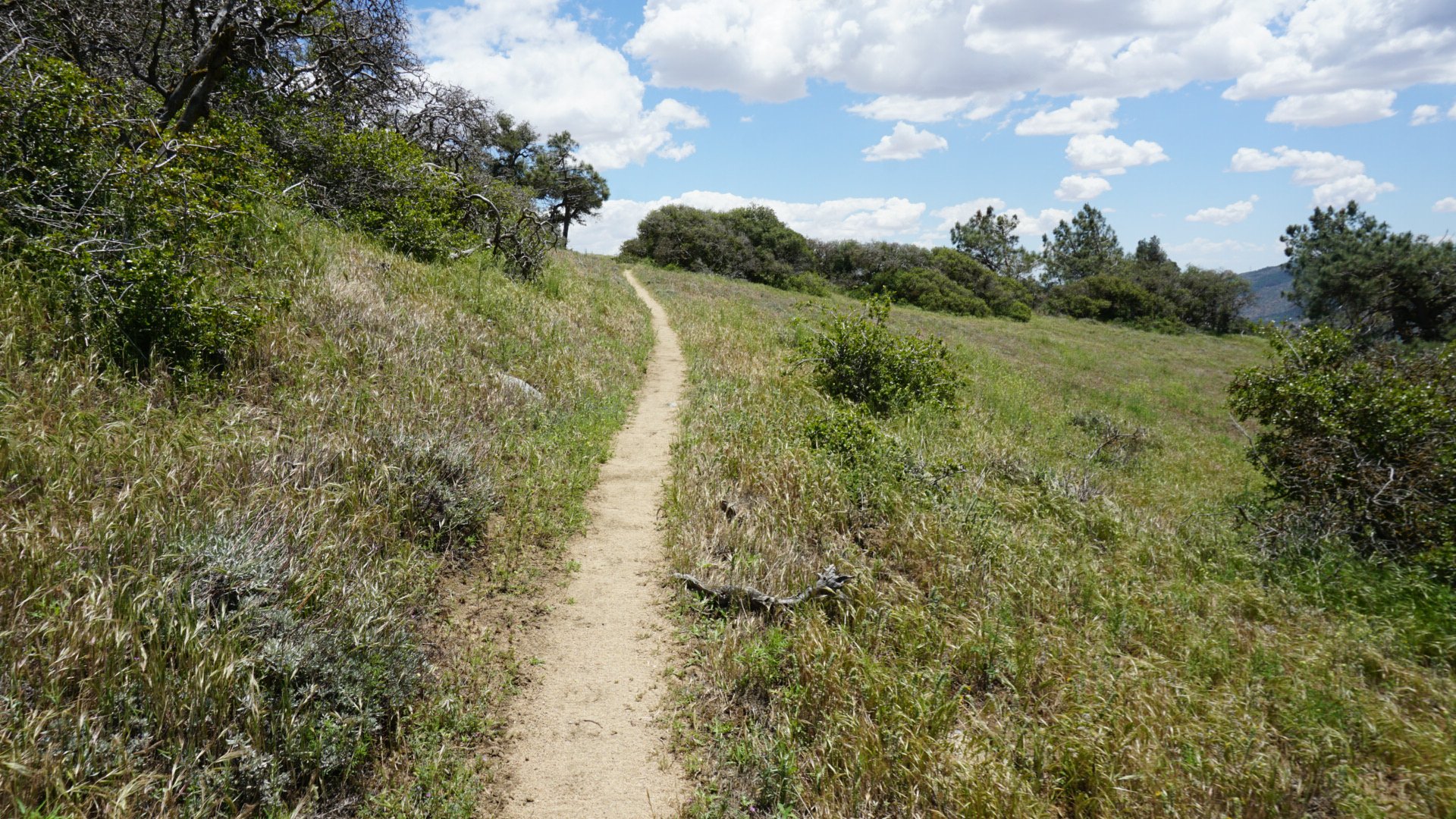 Meadows but no cows

We had an 18.5 mile waterless stretch, so I packed as much as I could carry. That turned out to be only 2 liters (and a fullwater gun) but I chugged over a liter at the source. Tragically this didn’t get me all the way to the next source, so the last 2 miles were spent specifically not thinking about cool water. 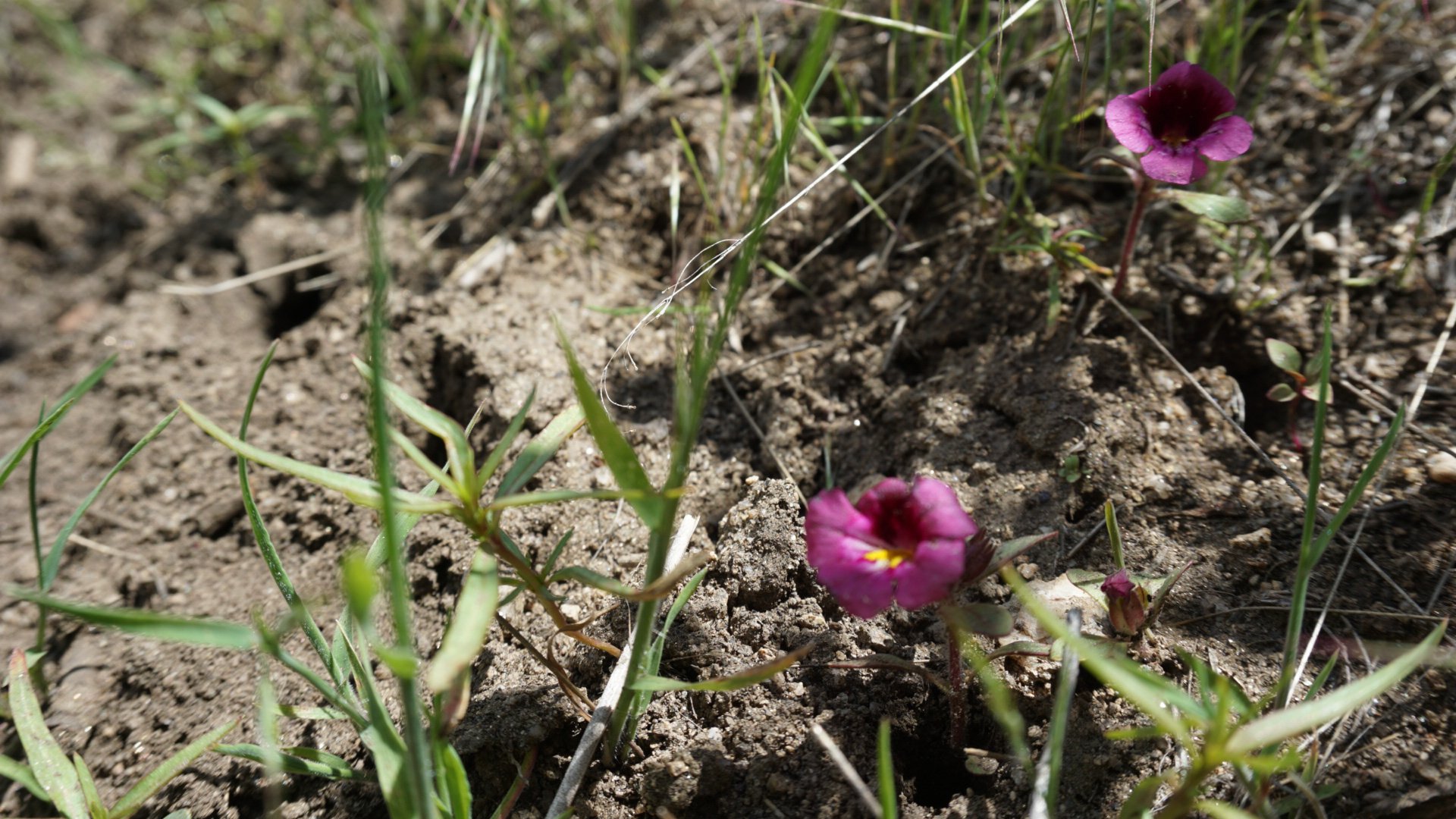 I popped ibuprofen like candy while walking, we call it “vitamin I” out here. It helped numb my aching toe, and carried me the 24 miles to camp. 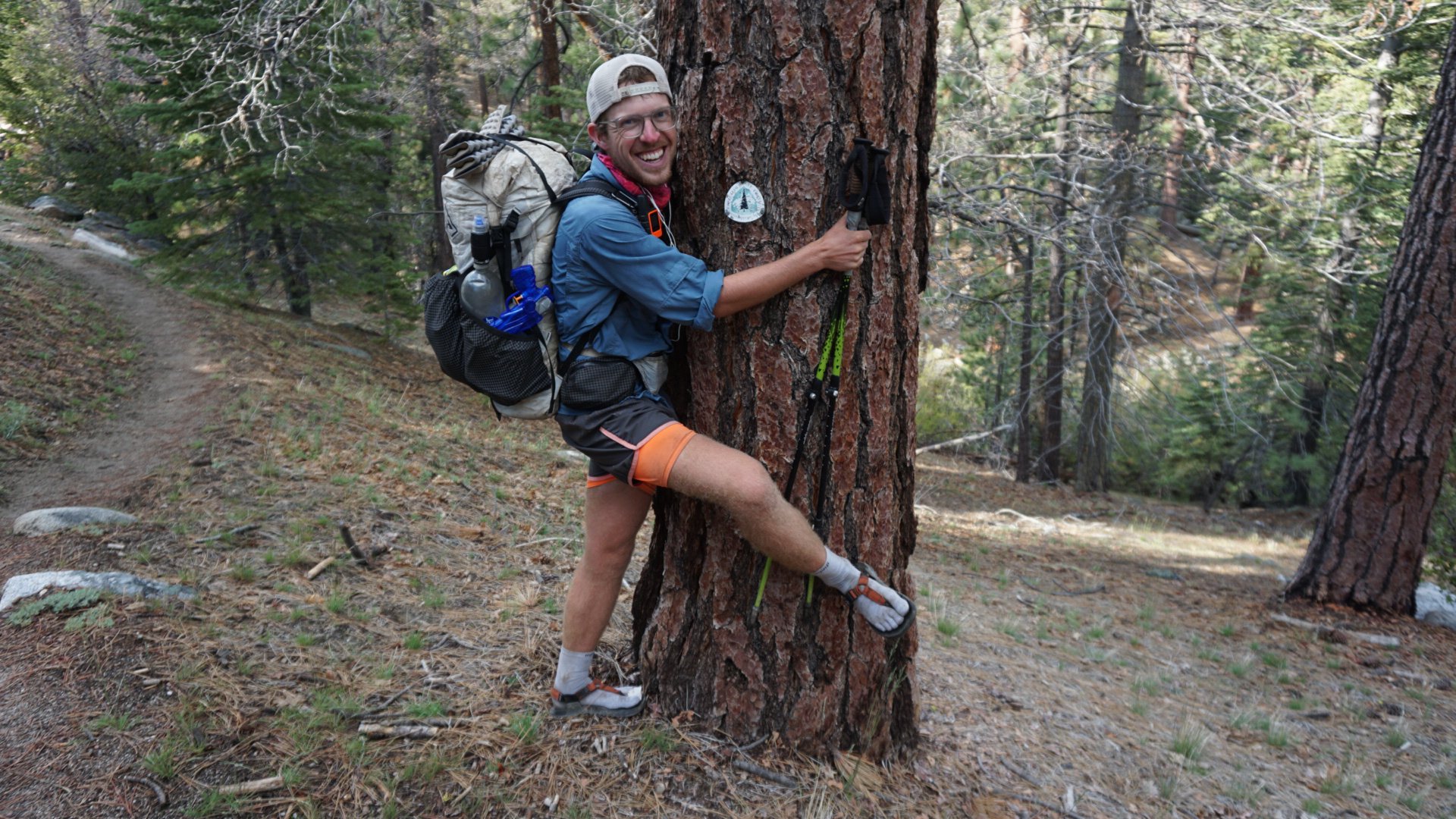 Loving the forests down here

The site was fantastic, a large open space surrounded by forest. I nursed my toe with antibiotic cream, and ate large amounts of sugar before crawling into my quilt. 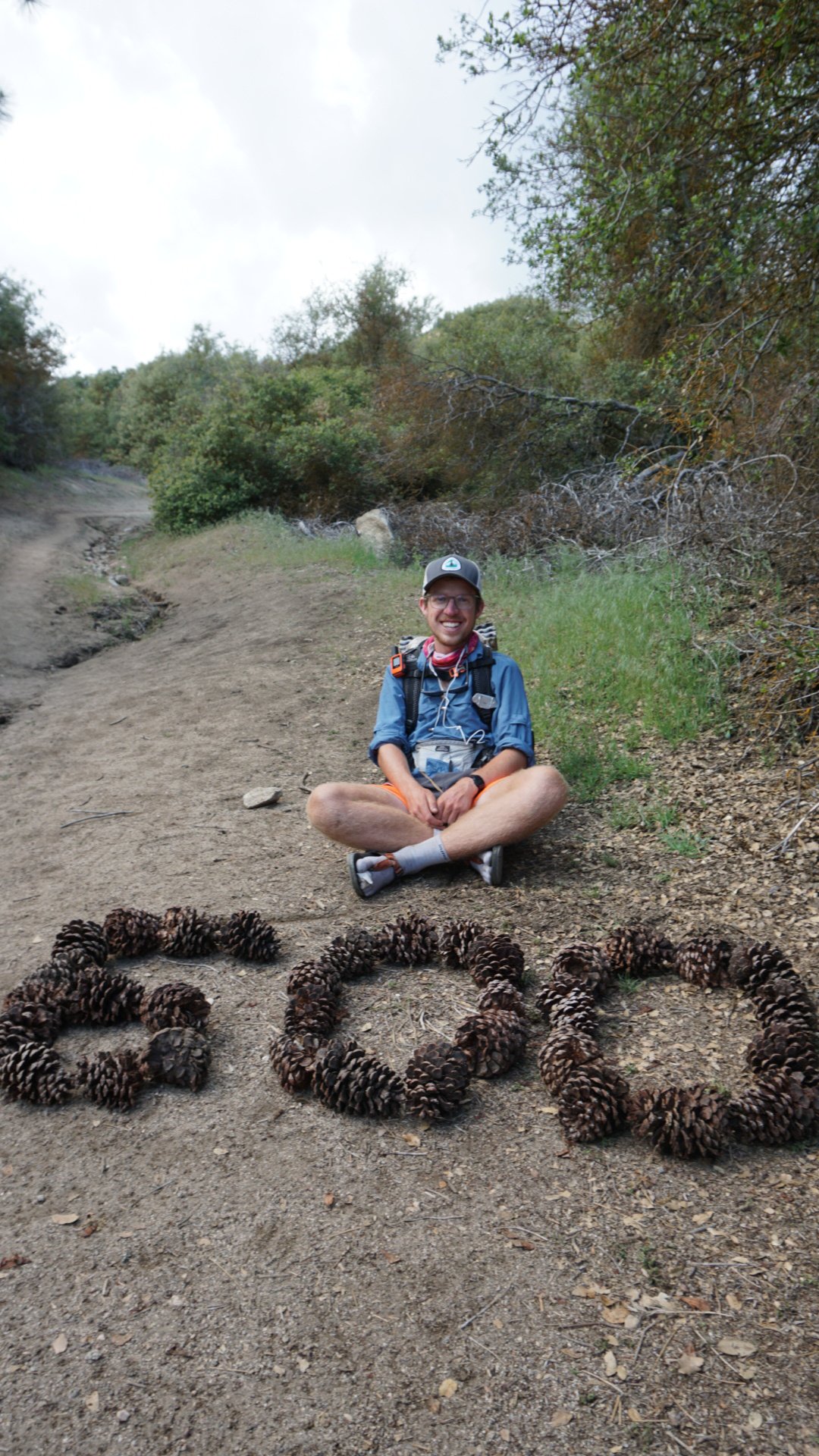 We woke up late to filtered sunlight. The night was beautiful, a starry sky framed by silhouetted trees. No bears were seen, but it felt like prime bear country. 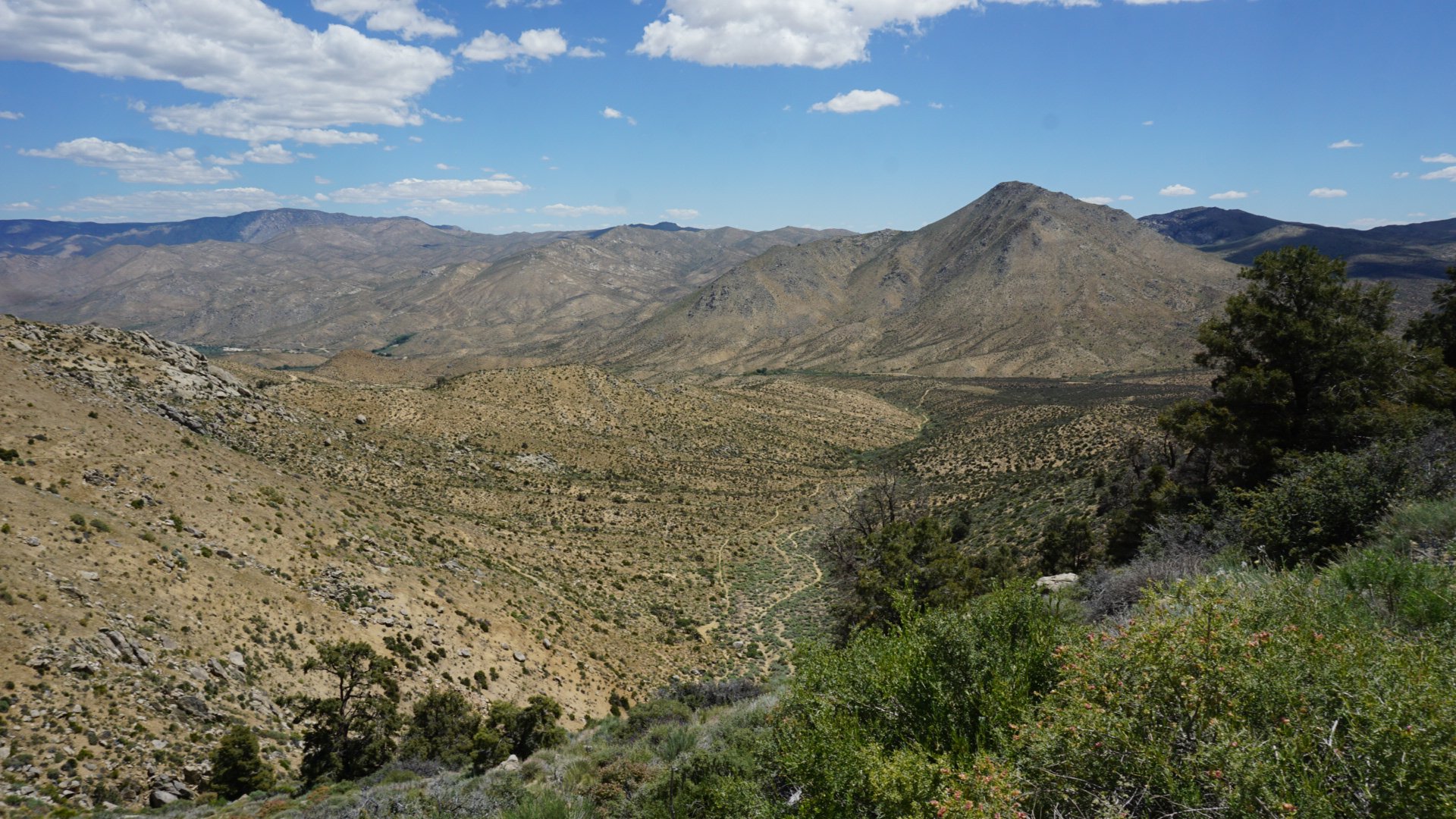 I spent some time getting my sore foot ready for the day while sipping a Starbucks instant white mocha. A quick antiseptic rub followed by large amounts of tape seemed to do the trick. It felt pretty bad for the first 2 miles, but by the time we hit the last water source for a while it felt almost back to normal. 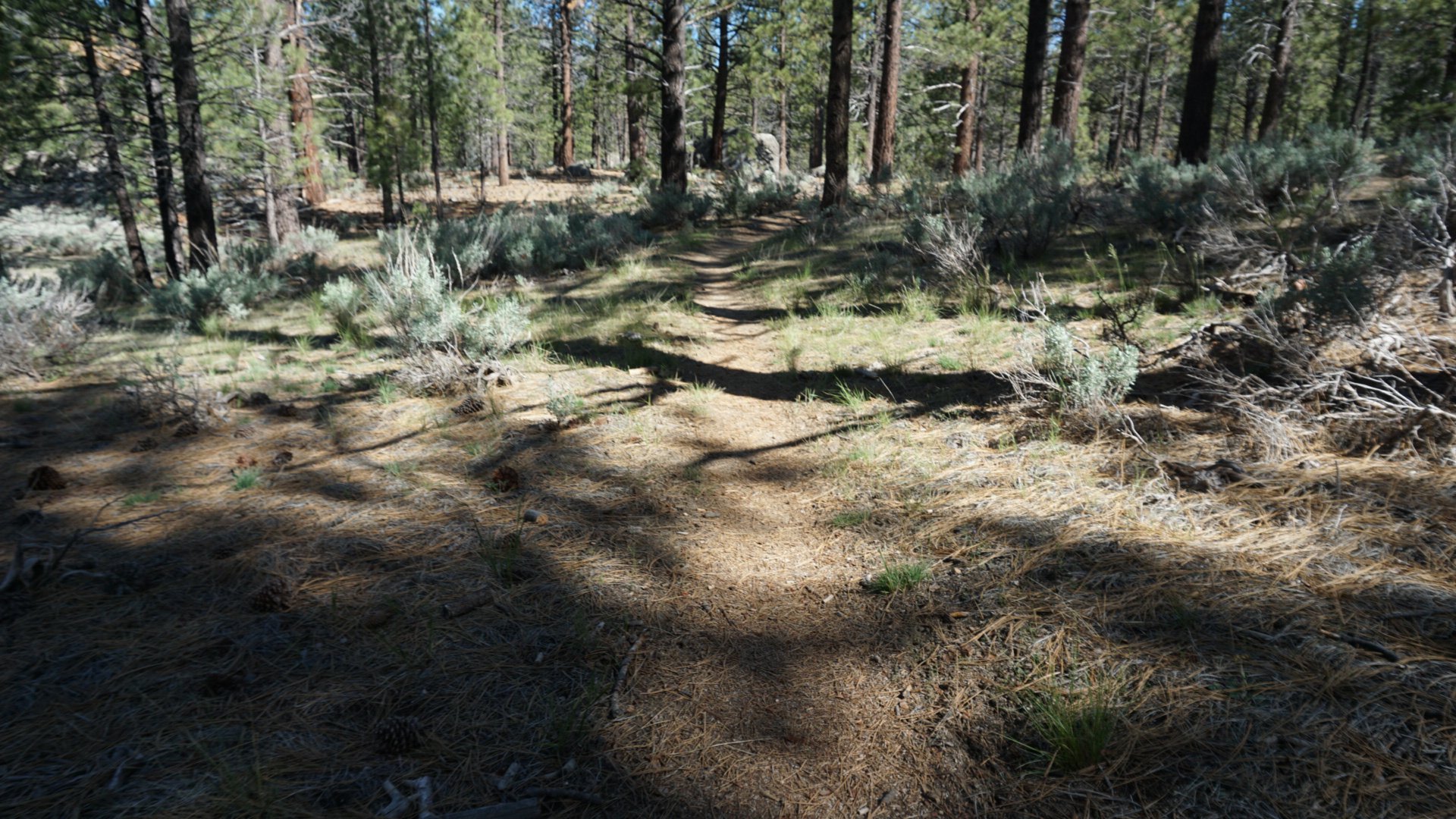 I picked up 3 liters at that source, as the carry would be a long one. Over 30 miles to the next non-cached source (caches are just stores of water left on trail by kind humans). It’s smart not to rely on these caches, as they may be empty. But we got some intel from hikers going the opposite direction that there was plenty of water at the next one. 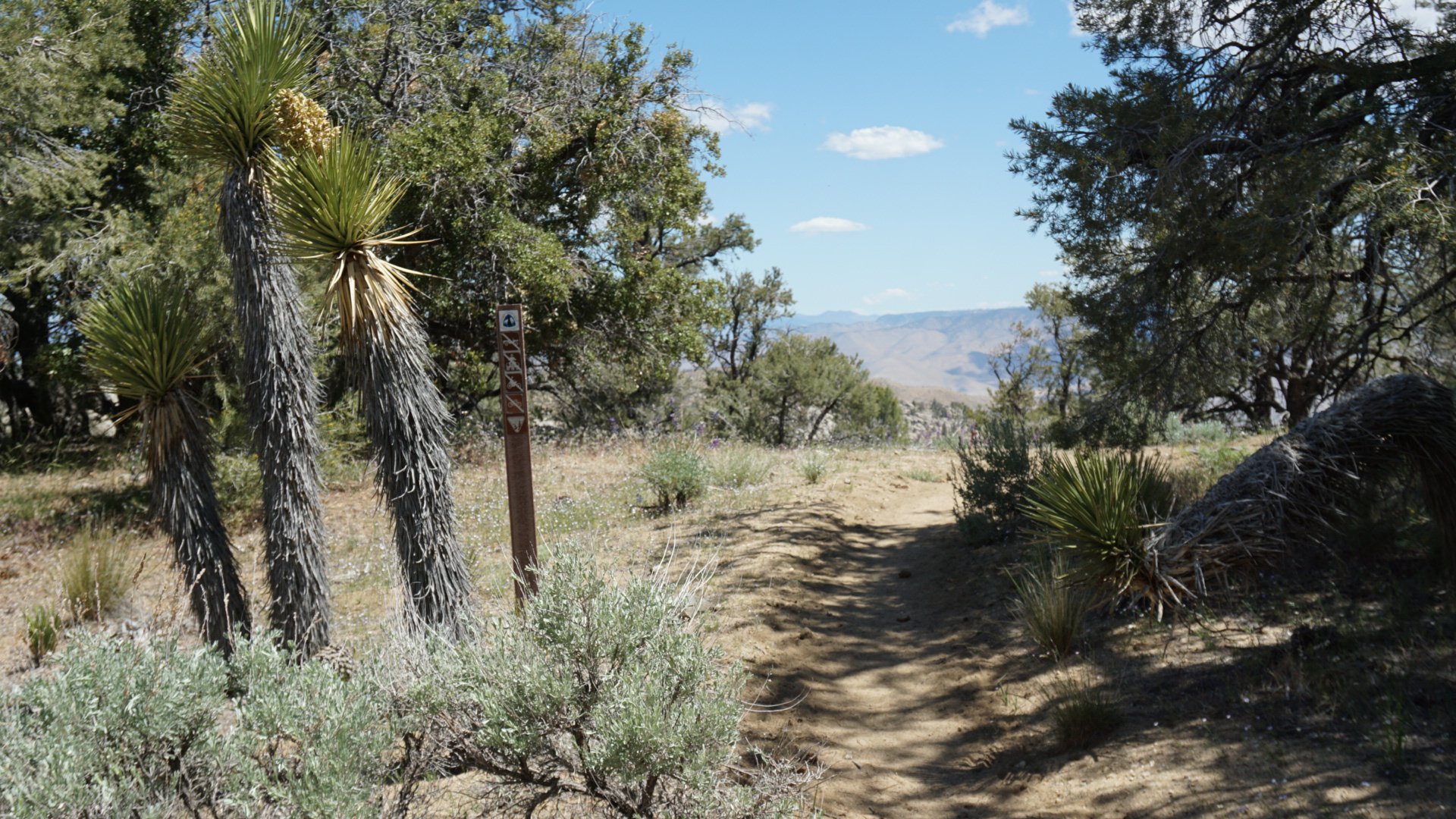 Onward I hiked, hobbled, and limped as the pain moved from one body part to the next. We came upon some trail magic and I downed a coke, which tasted like pure happiness and allowed my mind to slip from the aches and pains.

The rest of the morning went well, as I got a second wind and did some trail running as I went. I had one rattlesnake encounter, but they just slithered off into a bush as I neared. I think that makes 6 rattlesnakes for the trip, and I’m finally getting used to seeing them. 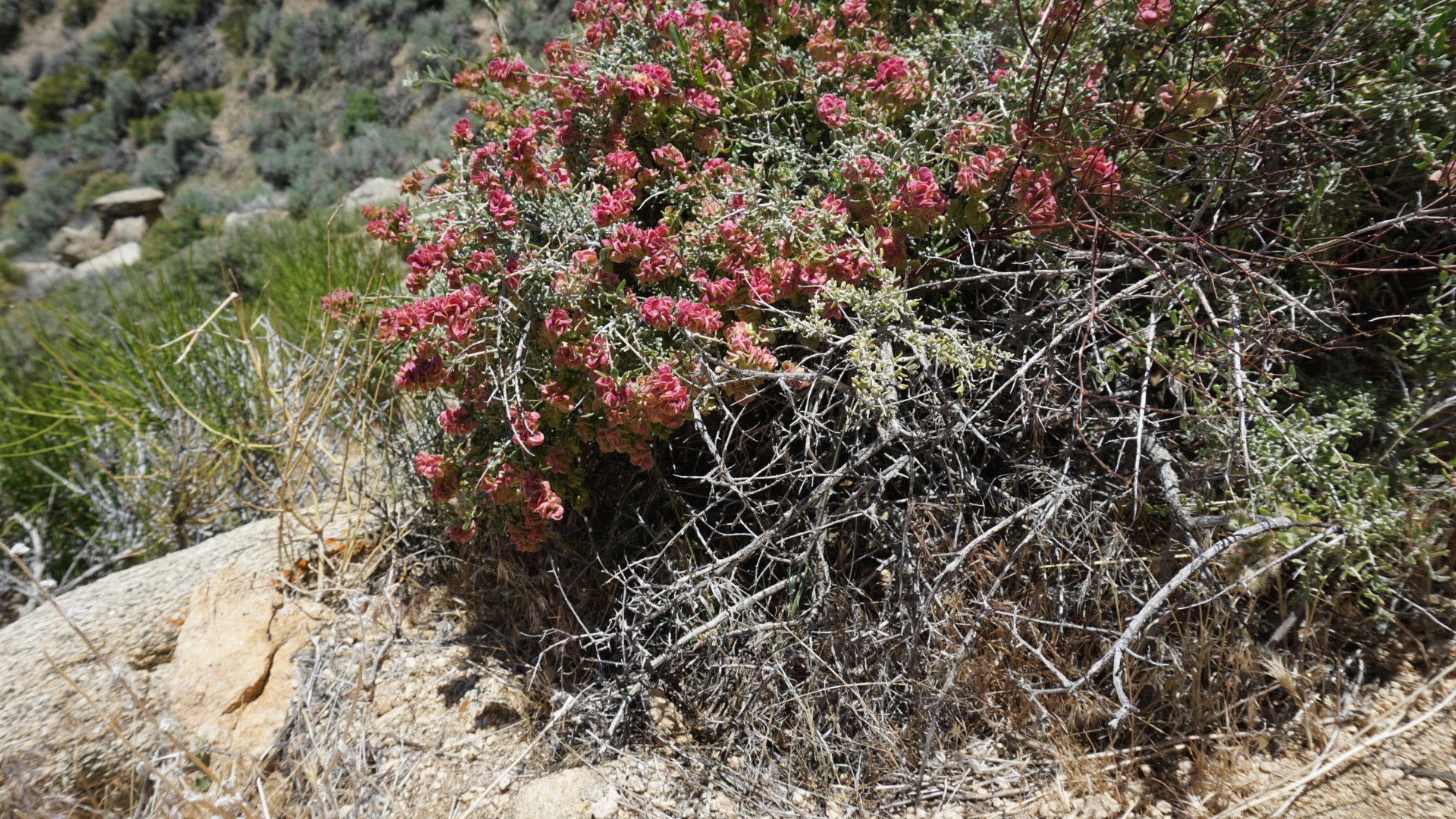 The cache was hot when I got there. Unbearably so. We put together a makeshift shelter for shade and rested and drank to our hearts’ content. We sat there for two hours, drying our gear of condensation and talking with fellow hikers. Some were getting off trail to sickness, and others were just getting on trail. 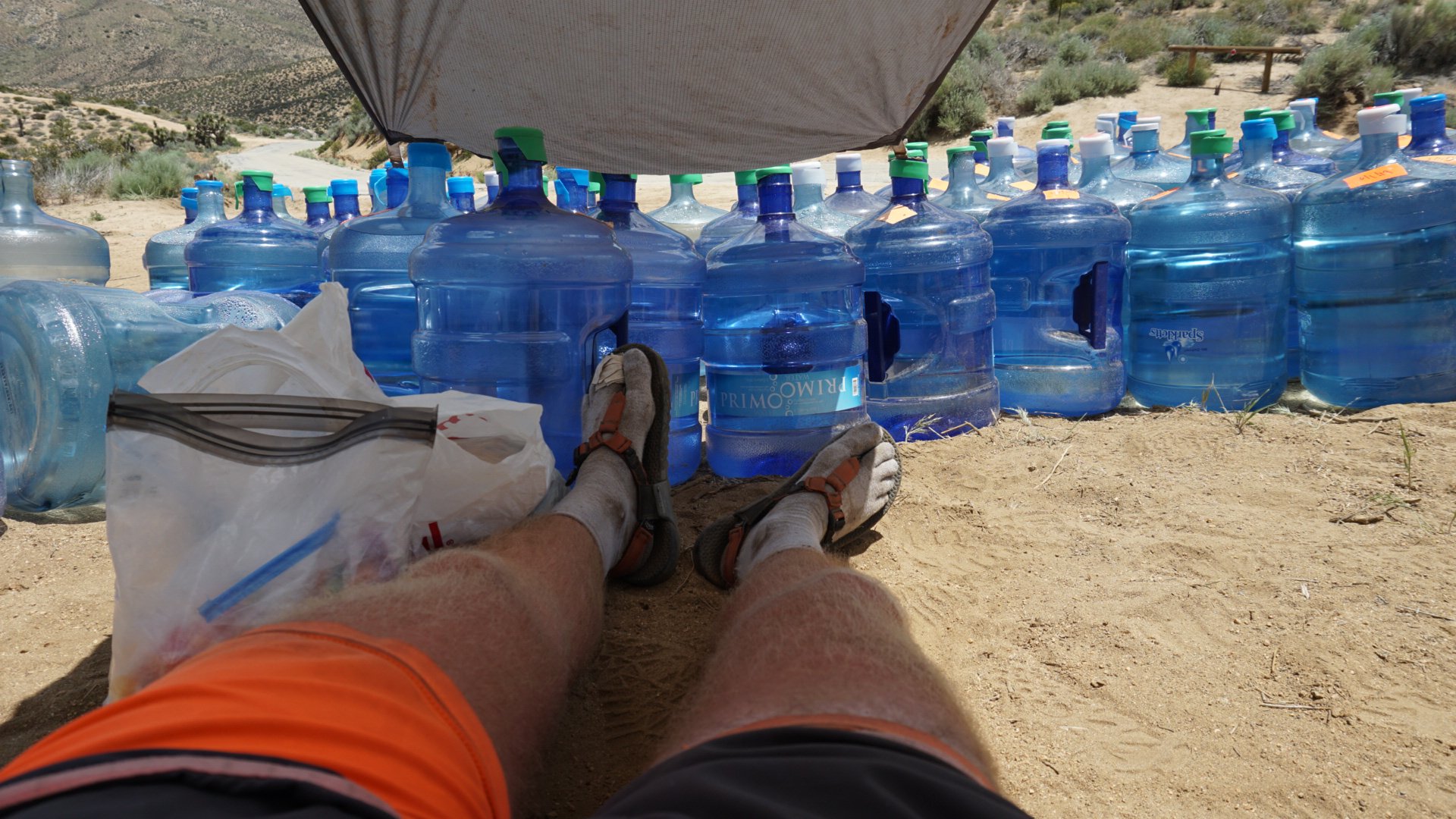 Resting by the cache (sorry for the foot pic, mom)

The rest of the day included a long and steep climb through Joshua trees and open cliffs, followed by another long climb to end the day. At the end of the first climb, a fire ant nipped my foot (yeah, the one with the bad toe) which sent me laughing. Not the kind of laugh that means joy, but the kind that wards off sobs of frustration. 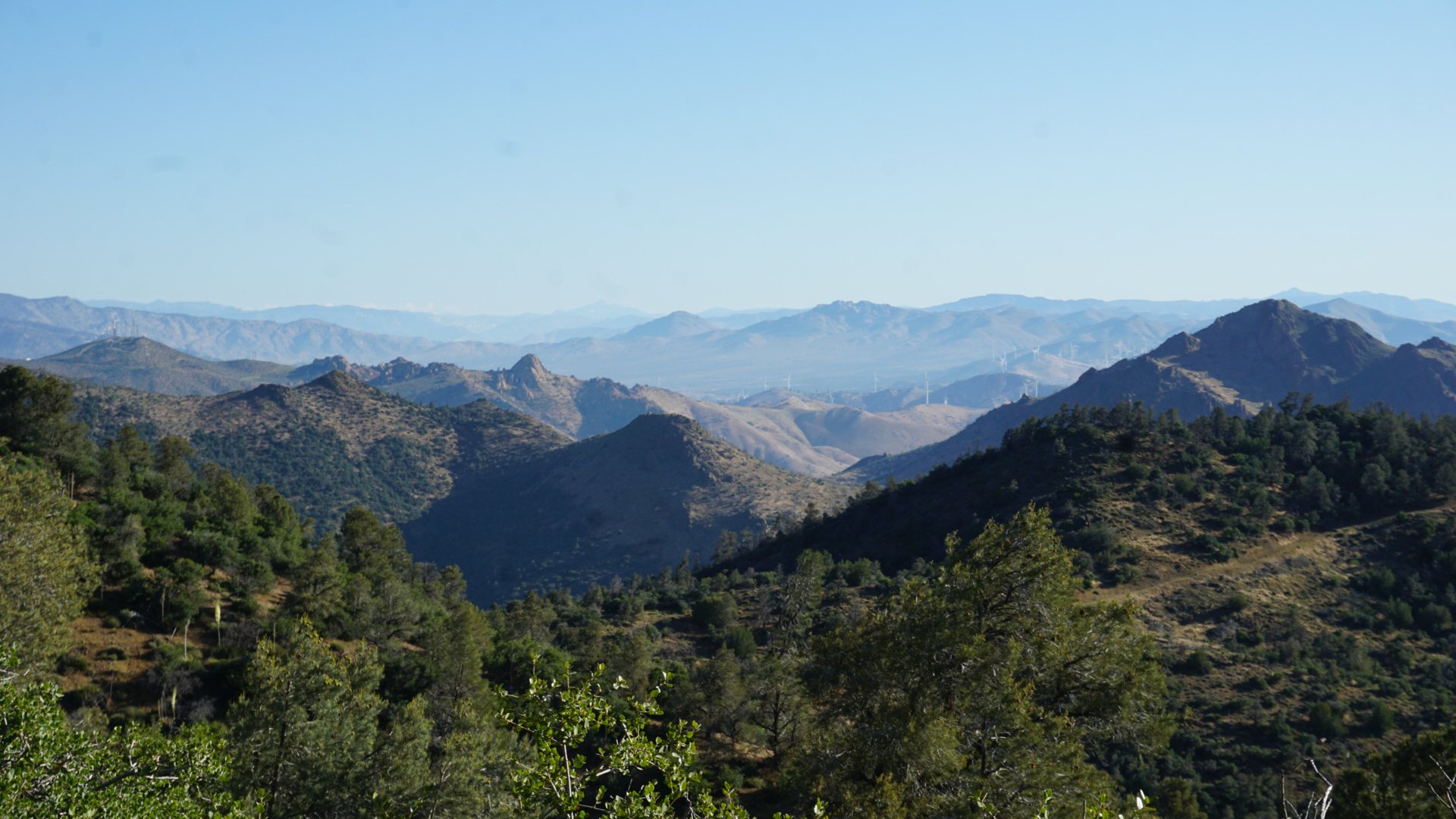 My view when the ant bit me

But at the end of it all, our crew set up our cow boy camps on the end of a ridge and enjoyed the best sunset I’ve seen on trail. 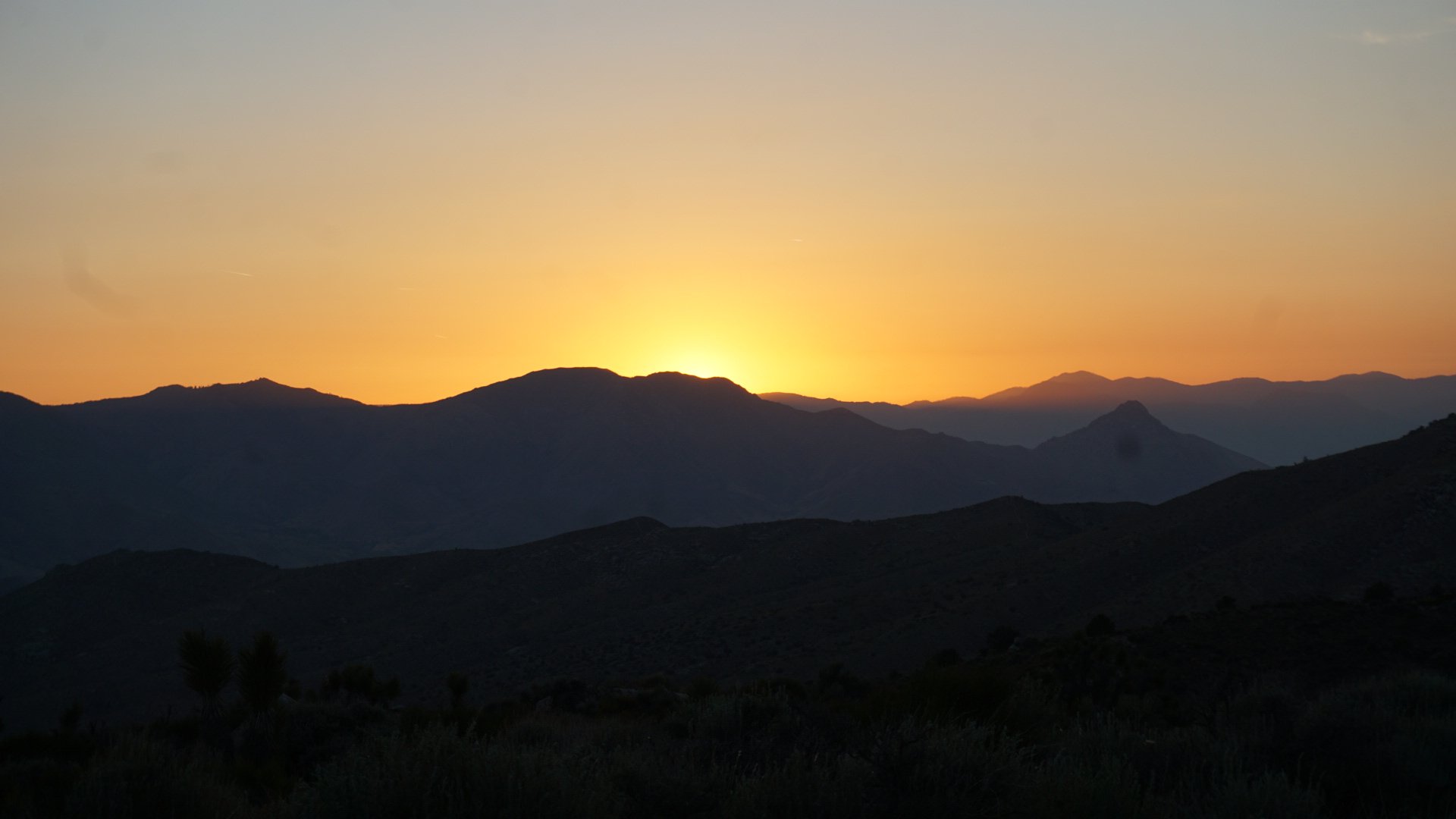 I gorged myself on food since we would be in town soon, and let my mind drift towards the peaceful calm that can only come after a challenging day.

Woke up around 5am and wasn’t ready to hike. I put on a movie I had downloaded in town (Captain Marvel) and turned off my brain. Thoughts of scorpions and tarantulas creeped around my brain all night, but nothing bugged me. 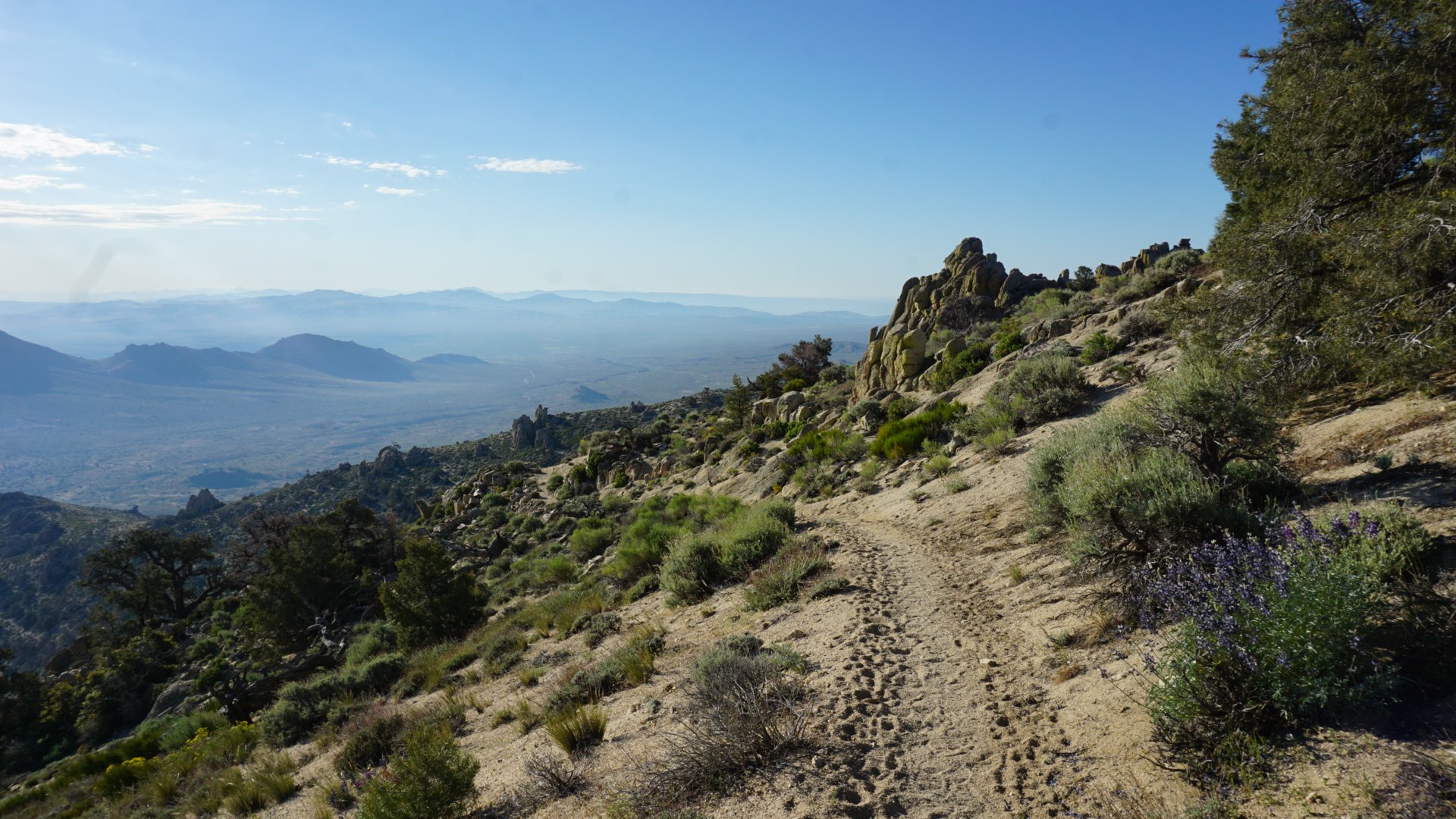 I was the last one out of camp again, by about 20 minutes. I had to nurse my foot again, and I was dreading the first few miles until it warmed up. It ended up not being too bad, which I was thankful for. I made it to the water cache at mile 630 and chugged 2 liters and took 3. Mild dehydration was the name of the game for most of this section.

The 2000 foot climb right after was weighed down with that water, but thankfully it was mostly shaded. I didn’t see anyone until the next water source 13 miles down the trail. It was nice, soaking in the views and allowing my mind to wander. 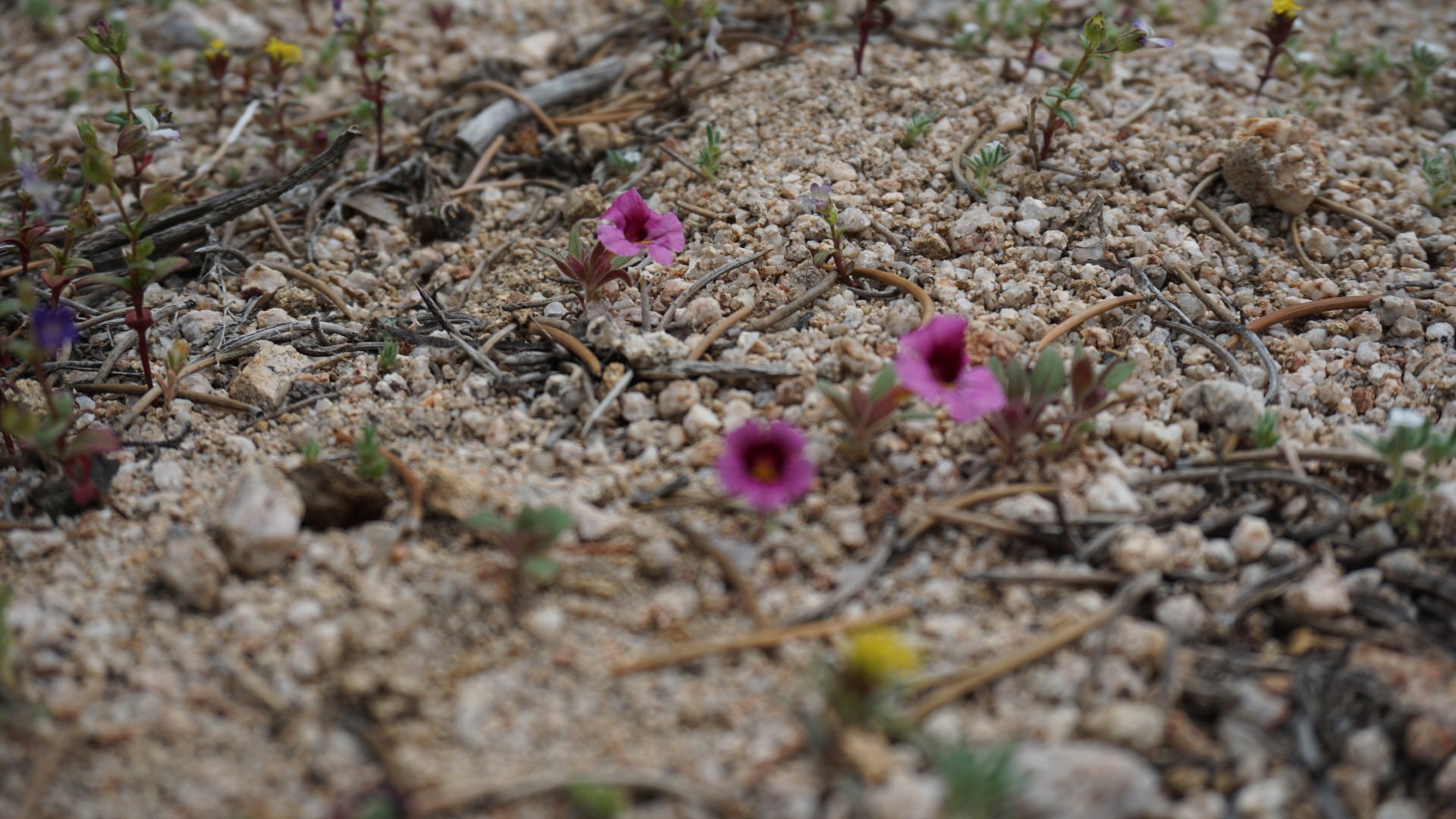 I rejoined my crew at the water source, a small seasonal stream. At this point I was about 7 ibuprofen deep to ward off the foot pain that’s been haunting me. They called my name as I neared the stream, and I smiled at how perfect my life had become. 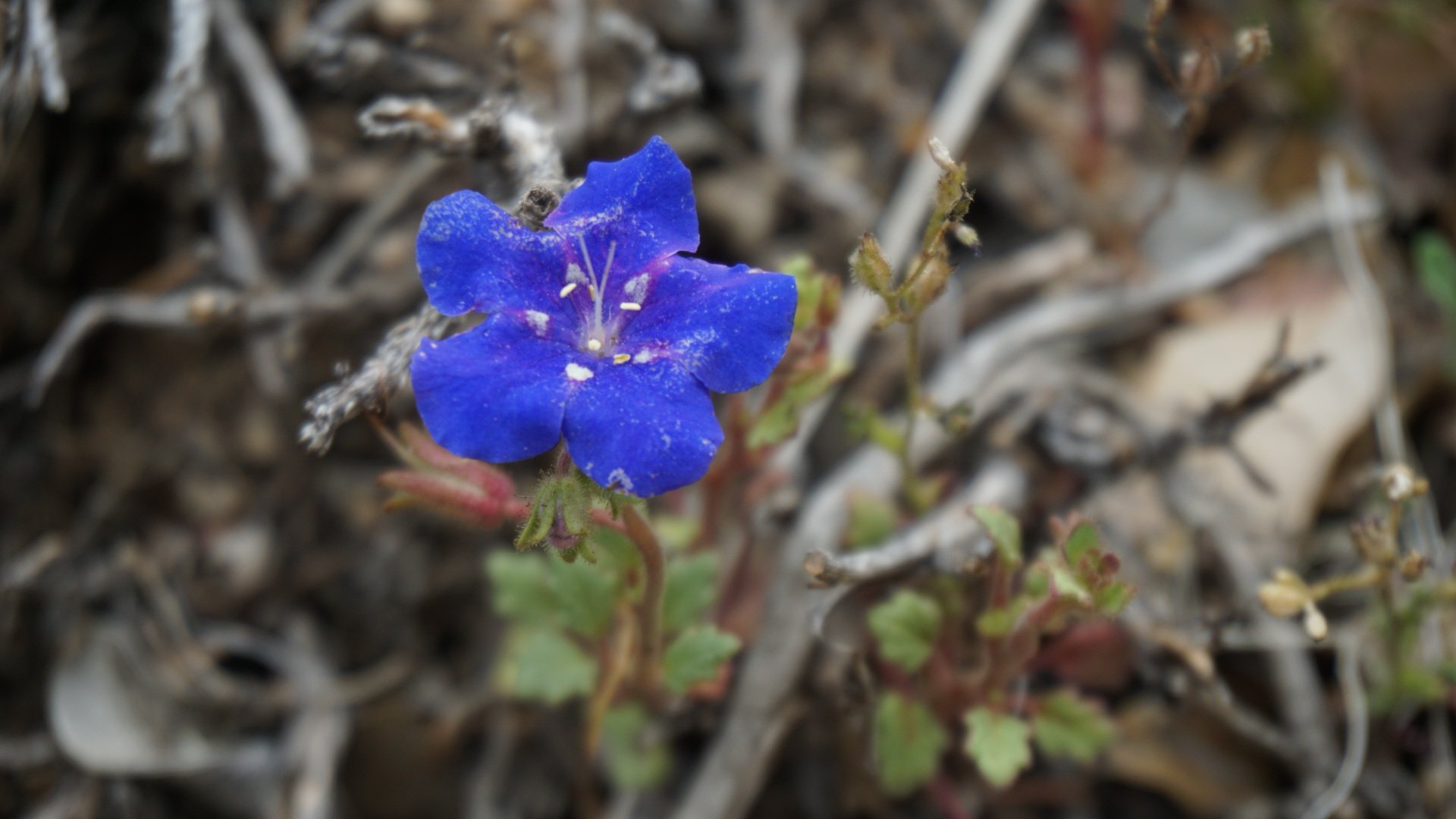 We pushed on, me taking up the rear. It would be a 2000 foot descent to Walker pass, the end of this section. Flowers were plentiful, and the miles went fast. When I rolled up to the campground (with toilets and everything) a group was just deciding to hitch into town. I didn’t want to pay for a hotel, and Pavlov was meeting her boyfriend here the next day. So we stayed despite the dark lightning clouds flashing in the distance. 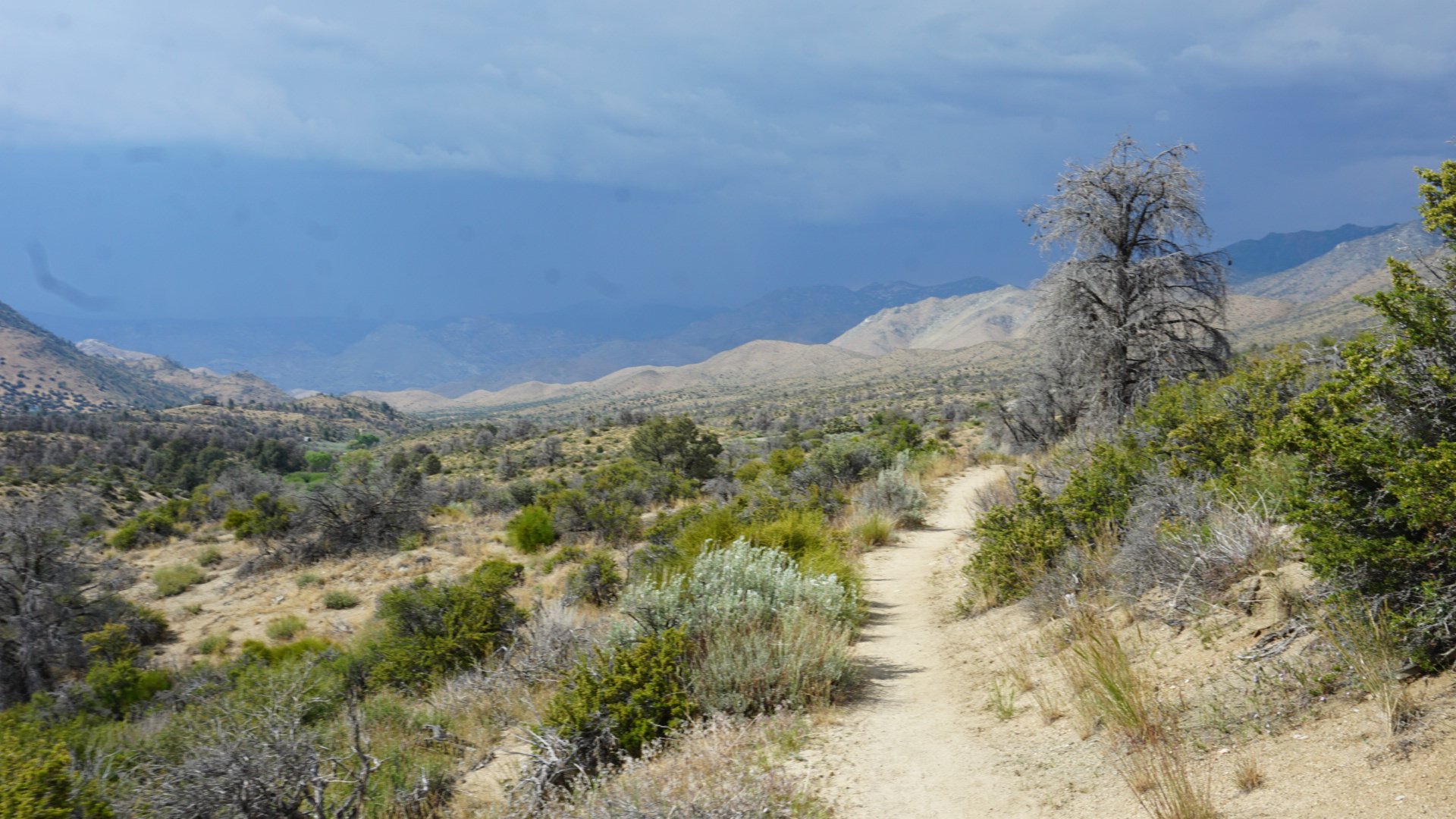 We quickly setup our tents in case the clouds came over us, in sheltered spots next to bushes. But as I was walking away, I heard the sound of a rattlesnake from the bush about 3 feet from my tent. I laughed at the audacity of it all. I didn’t want to be next to a den, so we moved our tents into a wide open area, with no threat of snakes. 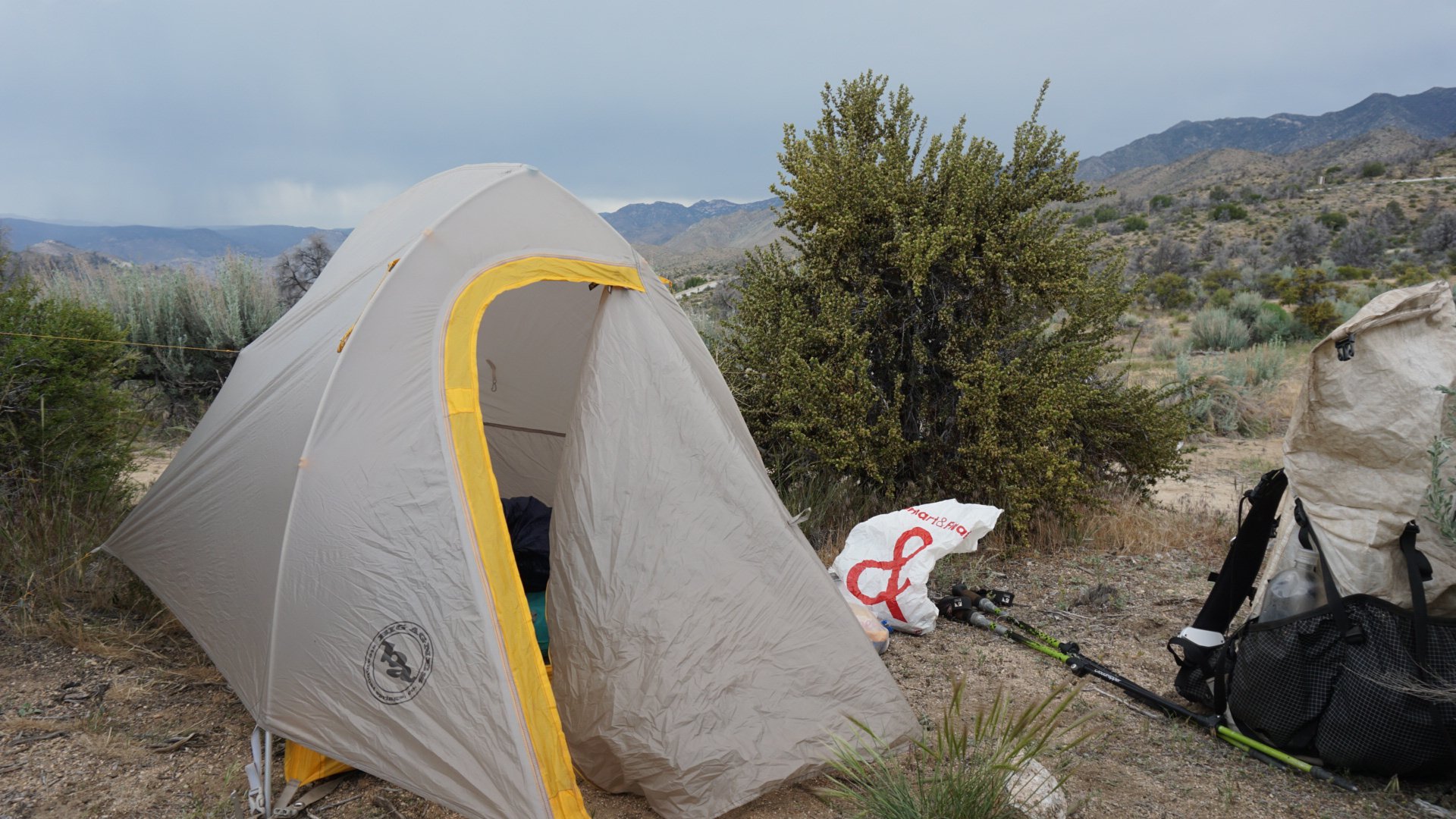 There’s a snake in that bush.

The clouds slowly cleared into a beautiful night, and trial magic came in the form of beers from Jim and ice cream from a cute German couple who come out here to hike every year. I fell asleep full of joy, ready to rest for a few days before possibly facing the sierras.

The next morning we were blessed with even more trail magic from Hobo Joe. We drank beers and hung out with about 25 other hikers who we pulled into our little vortex.

Our ride came at about 3PM, and took us to our little hotel in Lake Isabella. Not much has happened, other than eating, resupply, and resting.

I also picked up a pair of real shoes to replace my sandals going into the snowy sierras. I’m bummed that I won’t be doing the whole trail in them, but I’d rather not get frost bitten toes.

We leave on Sunday, to do the 50 mile stretch to Kennedy Meadows. We’ll grab our snow gear and push on to Lone Pine to reevaluate whether we want to skip ahead to avoid avalanches and creek crossings.