The Best Sunrise on the PCT

I woke up and packed my stuff up. We were leaving today! We all stood in line for the breakfast burritos we missed yesterday.

Grace and I left with Craig/Balto. We hiked 10 chill miles and made it to Jerry and Jim’s. I had a root beer and an apple. They’ve been doing trail magic for years!! Thank you for being a legendary stop on the PCT.

We then continued 10 more miles to the water cache. It was a lot of dead trees and sand. We took a break to eat and cool down within the 10 miles. At the cache I met some more nice NOBOs. They informed us that the horde of NOBOs is coming!

About when B-, Nemo, Mousetrap, and Roadrunner arrived at the cache the three of us were ready to continue 6 more miles to Six Horse Spring. This spring was the center of fear mongering for a bit. Hikers were saying it was so steep and you have to climb down to the spring. It was literally a few switchbacks. Not a bad walk at all.

When I arrived at the site I met squirrel! He has a Spotify playlist hikers have been adding to. We heard about him from Golden a few days ago and I wanted to get it from him!

It got dark pretty quick as Grace, Balto and I set up camp and cooked dinner. It was a nice spot.

It was so hot again today. It’s weird going from feeling great and doing 26 to feeling like death, and not wanting to hike more than 10 miles.

I hit the highest point of both Washington and Oregon! It was way easier getting up here than all of Washington. It still doesn’t make sense to me but here we are! 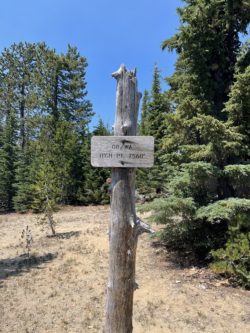 The water carry felt long today. 16 miles from camp to camp took me from 8:30am to 3pm. I could have made it the 24 to the cache but there was no reason to. Stopping at this lovely stream felt right. And my friends Nemo, Roadrunner, B- and Mousetrap were stopping here. The campsite was beautiful too. Huge red rocks towered over us.

I woke up earlier today and it’s a good thing I did because it was another hot one. It is still fairly smokey out but it’s better than last night. The first eight miles were beautiful and came easy. Catmando and Guinness caught up with me, and because I find hiking easier when I’m talking, I kept up with them.

We arrived at the water source and there were so many people there. The amount of NOBOs I’ve passed is crazy. It’s so good to see how many people have been enjoying the trail. We hung out there for a few hours as we only had 9 more miles to do today. I wish I treated Washington like this, I wish I took my time and enjoyed it more. I’m not going to make that mistake through the Sierra’s.

The rest of the day was another hot one. I was hiking fast just to get through this exposed flat section and arrived at the second water cache at around 3:30. I joined Meghan, Roadrunner, B-, and Mousetrap in making dinner before hiking the last half mile to camp. We are taking the Crater Lake Rim Alternate route and we are trying to see the sunrise over Crater Lake tomorrow. We figured the smoke from the fires would be more clear in the morning as well. Each day it seems to get smokey at 3pm and will stay that way until sometime in the evening.

It’s nice to be done hiking at about 6pm. I’m not too tired to write and I’m not taking away from my sleep. It has also been interesting to think so much about water and plan hiking around that. I want to give a HUGE thank you to Devilfish for taking care of the water caches through this section. It would be a long heavy water carry.

After setting up camp we made friends with the NOBOs across camp from us and hung out for the rest of the night.

I woke up at 3am after hearing B- and Nemo leave. I hiked the three miles to the rim and then climbed took spot in order to to watch the sunrise. I was joined by Num Num, Free For All, and Viewfinder. After the sun was up we hiked further and met up with everyone else after.

We hiked around the rim to the Cafe and got breakfast/lunch. I ate ice cream sandwich #1 here.

After eating we continue into Mazama village. Mousetrap got us a room. I have no idea how because we met our neighbor, Trish, who had booked months in advance. We showered, washed our clothes in the shower and started talking about dinner and our resupply.

I picked up one box, not knowing I had two and then we went to dinner. I had ice cream sandwich #2 and a pint of ice cream.

We hung out another neighbor, Joel, and his two dogs. He is running the 10K tomorrow. We hung out and drank beer with our new friends until it was time for bed.

I had some trouble with my second box, my name was written funny so they had it stored under “Dalog” and not Balog. Phew, glad that headache was resolved. Now I have contacts and solution. I organized my food and then it was soon time to go.

We had extra beer so Mousetrap, Roadrunner and I sat next to the spring that’s close and finished them. While we were hanging out we met Fallen Turtle, who hiked the AT several years ago and we talked with her for two hours. She asked if we jumped in the crater and we said the race disrupted those plans. She retorted that we NEEDED to go cliff jumping in crater lake and she and her husband would drive us. In the words of Mousetrap, “If you go to a place and it has a thing, you do that thing”. So we did the thing!

We hitched back with this family. The mother/wife had just run the marathon that morning. She’s actively running a marathon in every state. She said she wanted to hike the PCT and we were all encouraging her to.

After getting back, I ordered pizza which was not as good as the previous night. And then we met some NOBOs and played cards until 11:30pm. All worth it. Mazama Village was more than I imagined it to be!

The Best Backpacks for Thru-Hiking of 2022

The Best Thru-Hiking Tents of 2022

I've Been a Thru-Hiker Since 2013: Here's How Gear Has Changed