Day 40 arrived. It was the final stretch to reach the Cape Scott lighthouse, the northern endpoint of the VIT. I thought I would have been excited and eager to get going, to breeze through the final kilometers and find myself triumphantly skipping up the hill to the sight of the much anticipated landmark. But I woke up sore, lethargic and lazy. There was so little left to do, but I didn’t want to climb out of my cozy sleeping bag into the damp and foggy day to face it.

I had set myself up at Nels Bight precisely so that I could make my final two days up north go as smoothly as possible. The Cape, with its lighthouse, marked the northwest corner of the island – a little knob of land surrounded on three sides by ocean, connected to the greater body of the island by a narrow neck of sand. I was planning to day hike there, leaving my camp at Nels where it was to come back to that evening. There was no point in carrying all my gear north when I would have to backtrack and head the opposite direction – south – to get to the trailhead the next day.

I slowly got ready, packing my water and snacks into my pack’s detachable top-flap-turned-day-satchel. Finally extricating myself from my comfy cave, I crossed the blustery beach and plunged into the forest for the second last time.

The path to the lighthouse wound through the woods, connecting together patches of old plank road. It opened up into south-facing Guise Bay, which featured the lapping of calmer waters. Just behind the bay though, on the other side of the sandy bridge that led across to the Cape, the roaring of the ocean as it pounded the shore of north-facing Experiment Bight could be heard in the distance. 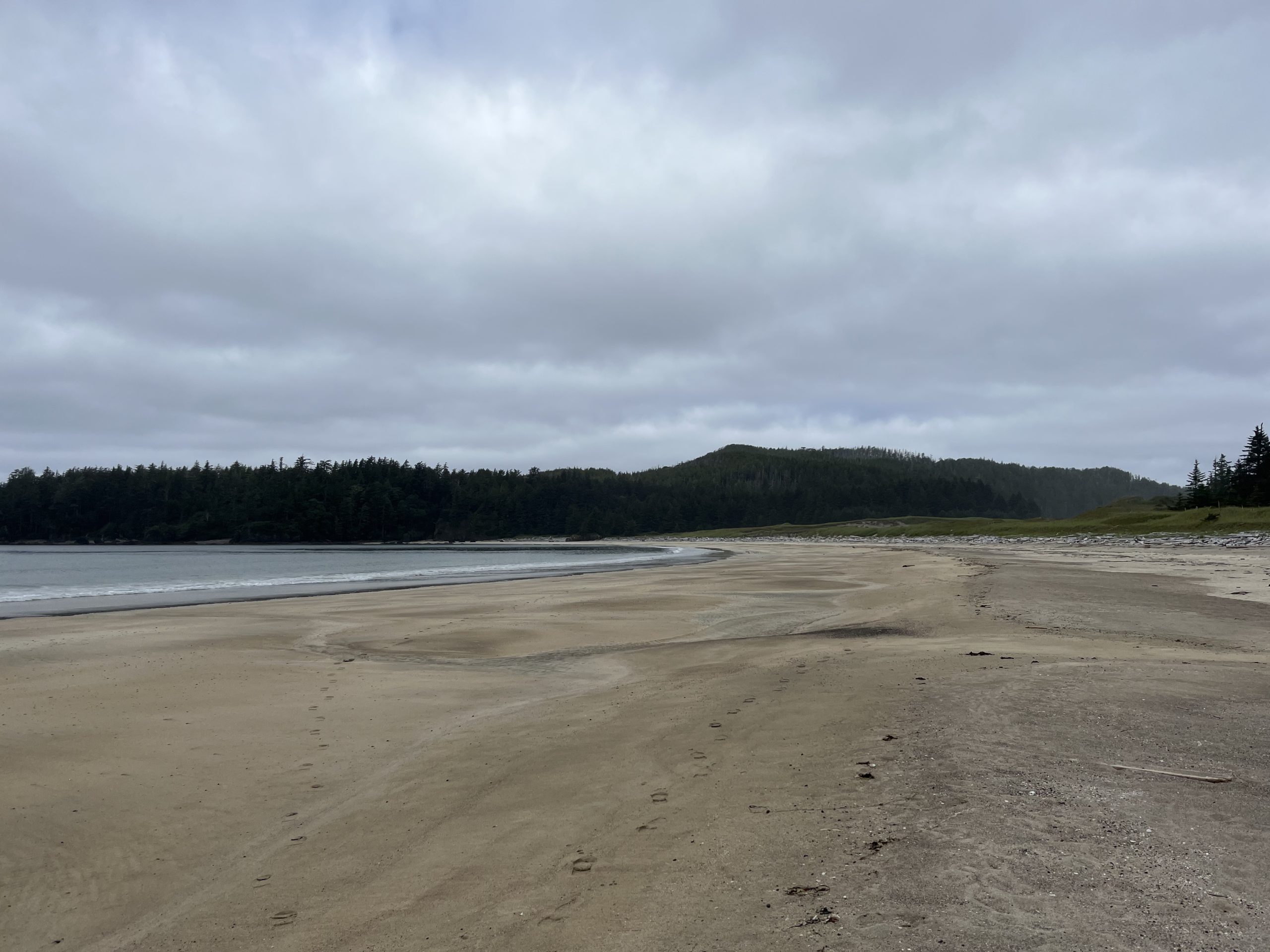 A short forest walk later, I arrived at the lighthouse. The blue and white buildings that housed the resident lighthouse keepers were scattered about a cleared patch of lawn, with the tower itself – not as tall as you might expect – standing in the middle of the compound. 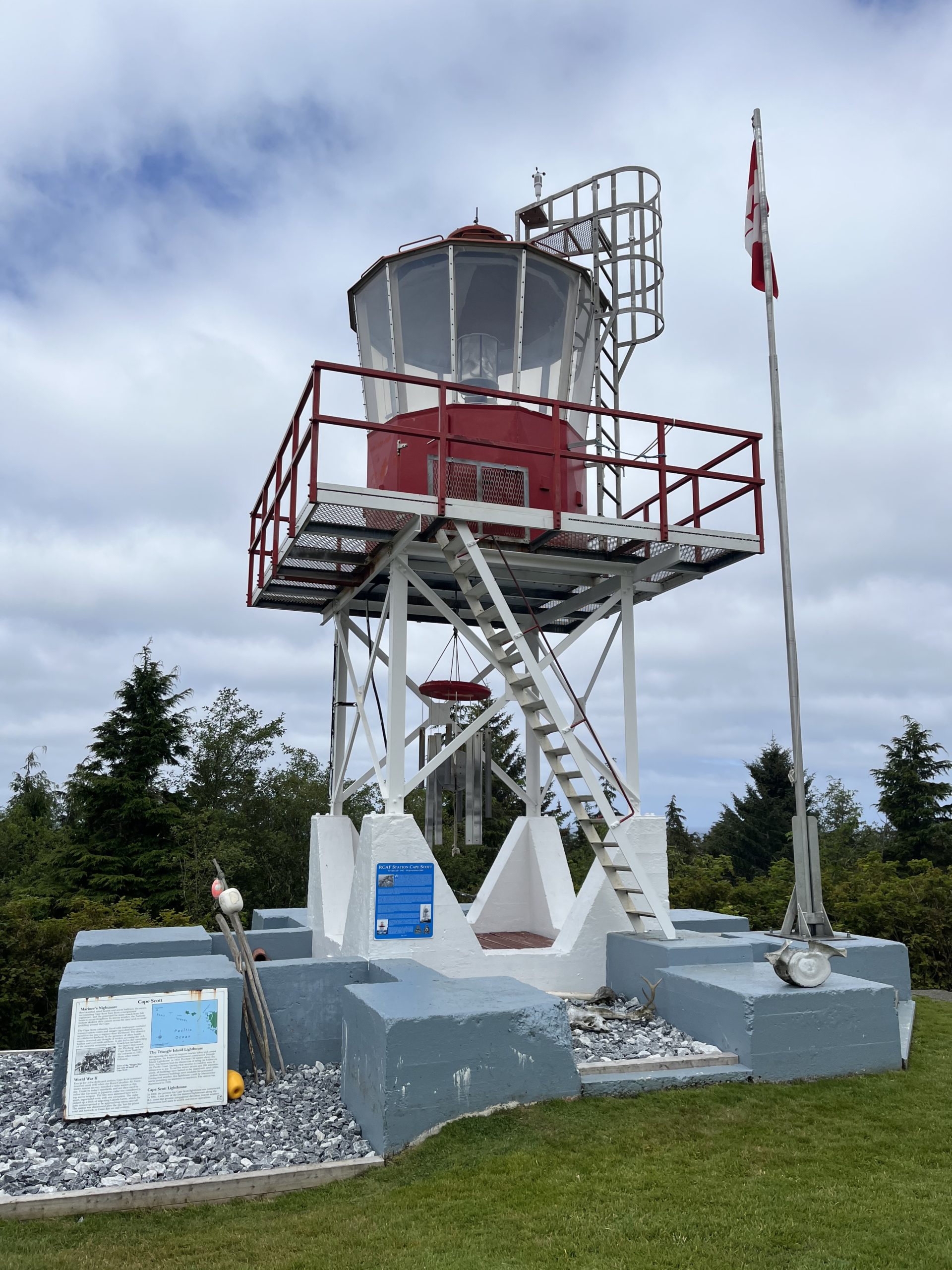 I climbed the stairs to sit by the light at the top, and gazed out across the open ocean. To the northwest, I could see Cox Island, a weather-battered, uninhabited place even farther out to sea. I sat there for a long while, just resting. I watched the spouts of a few whales puffing misty white out of the water in the distance. 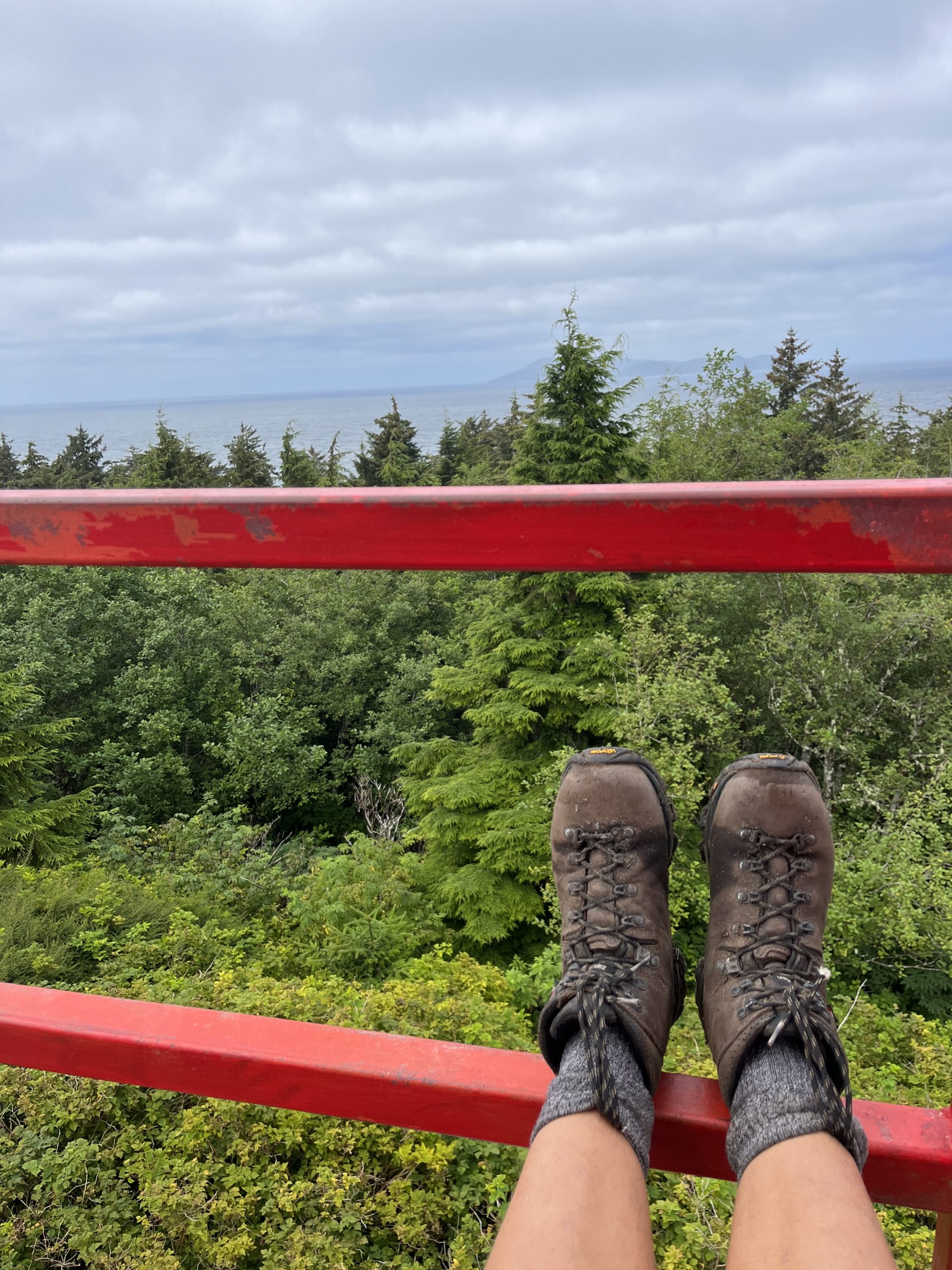 View from the Lighthouse

And that was it – I made it to the end of the trail. (Of course, it was not the end of my journey, as I still had a section to complete mid-island that I missed a few weeks back). There was nowhere farther to go, unless I wanted to jump in a boat and keep motoring on out into the open Pacific Ocean. There was nothing else to do but to turn around, once I had filled my bottles with the nice clear tap water free for hikers offered by the lighthouse staff. There was no place else to turn, but back to where I came from.

Cape Scott is a popular place for backpackers, and so the past few days I had been bumping into and having passing conversations with a few people I would camp next to or pass on the trail. It felt strange at first to be sharing the trail, and the experience of hiking it, with other people. But I soon grew to appreciate the mutual understanding that came with coming across other people who were carrying their food and shelter on their backs, trudging trails from one temporary home to the next. An ease of empathy flowed between us, as we immediately understood each others’ struggles and striving, just with a glance. I didn’t anticipate how validated I would feel by being around other people moving about in a similar way as me.

I walked from the lighthouse back to camp chatting with another hiker the whole way. It was my first time hiking with someone else, this far along in my journey. It was nice to let my mind wander away from the immediacy of the trail and into the interesting intricacies of another human being’s conversation.

I spent the rest of the day chilling at camp, and read my book while watching the sunset. Once again, I marvelled that such a place even existed in Canada, a country whose stereotype leaned more in the direction of winter wonderland. 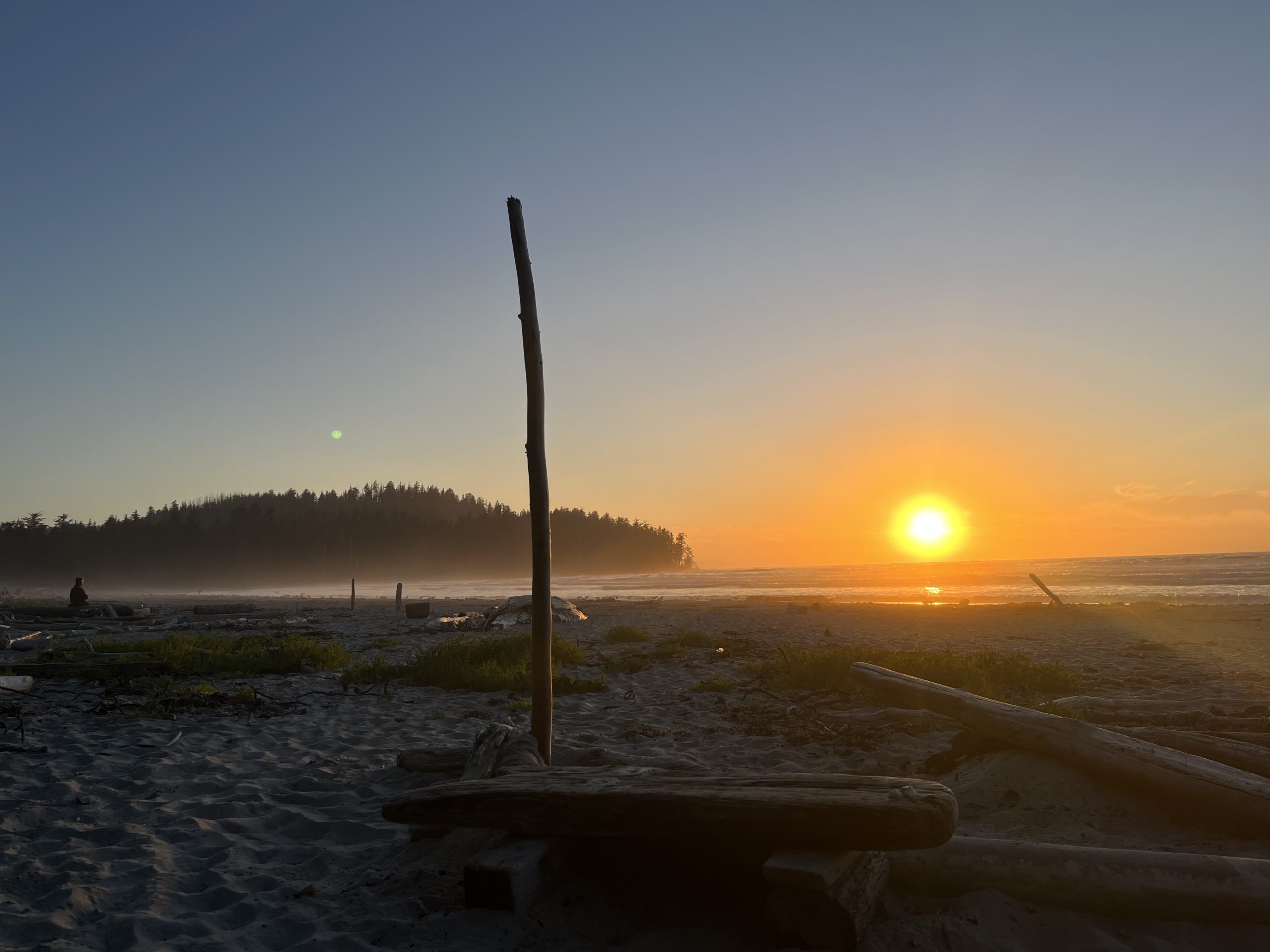 I started out as soon as it was light enough in the dense forest to see where I was going on the morning of day 41. I flew through the boardwalked bog, across Fisherman River, and past Eric Lake to find myself at the parking lot at the trailhead mid-morning. 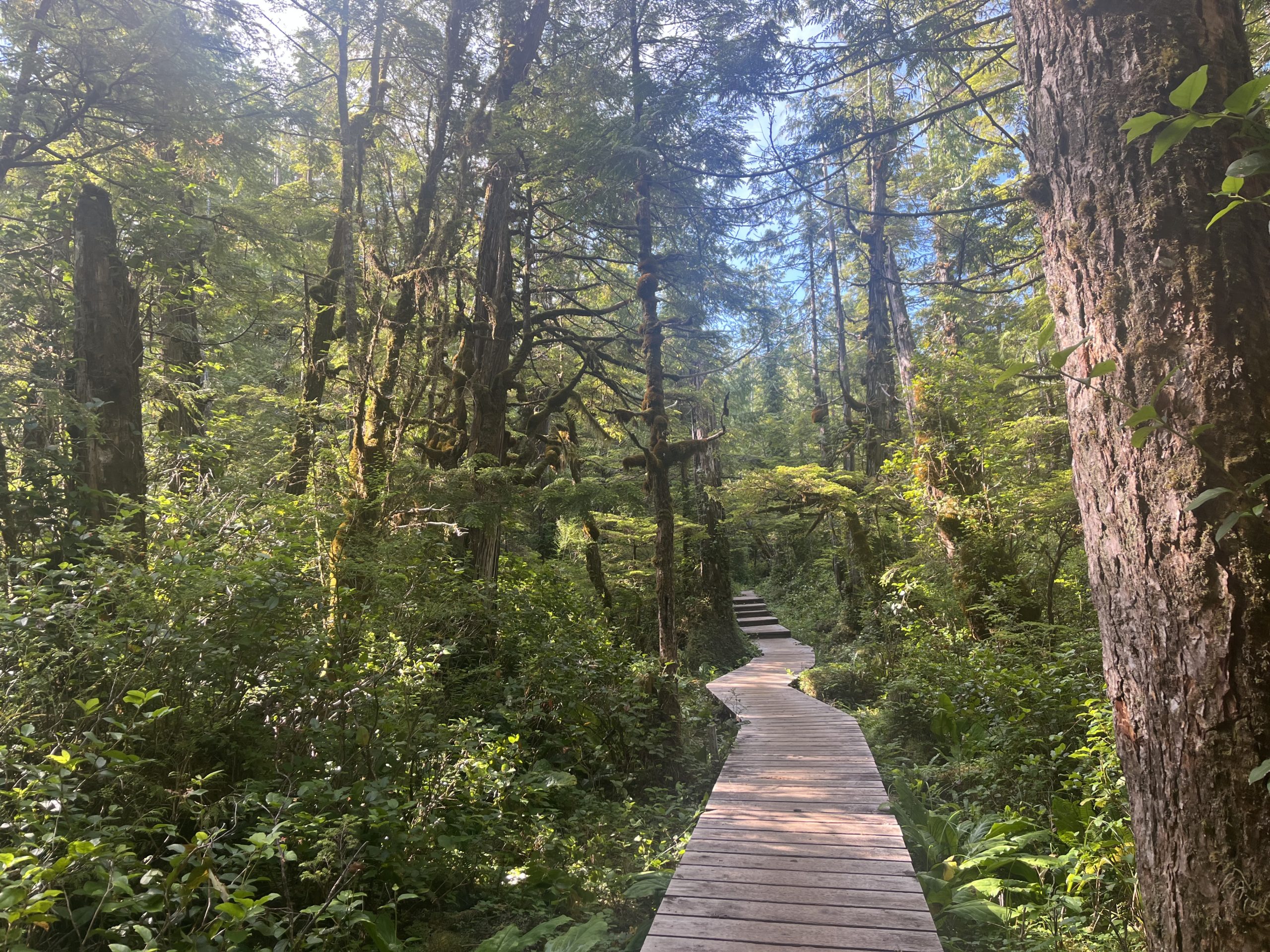 I was going to try and catch a ride down island to Courtenay, where I wanted to take a few zeros before embarking on my final 100ish kilometers in the North Vancouver Island Ranges.

While I was hanging out at a picnic table, a fellow hiker and camp-neighbour who was backpacking Cape Scott came out of the bush and we congratulated each other on finishing up. After disappearing back to his truck for a bit, Gord reappeared with fresh sandwiches and sodas for both of us to enjoy. My tastebuds rejoiced at the juicy tomato, the crispy lettuce, and the tangy mustard. Fresh food! I was in heaven, having survived on trail mix and minute rice for the past week. I was so grateful for the treat. 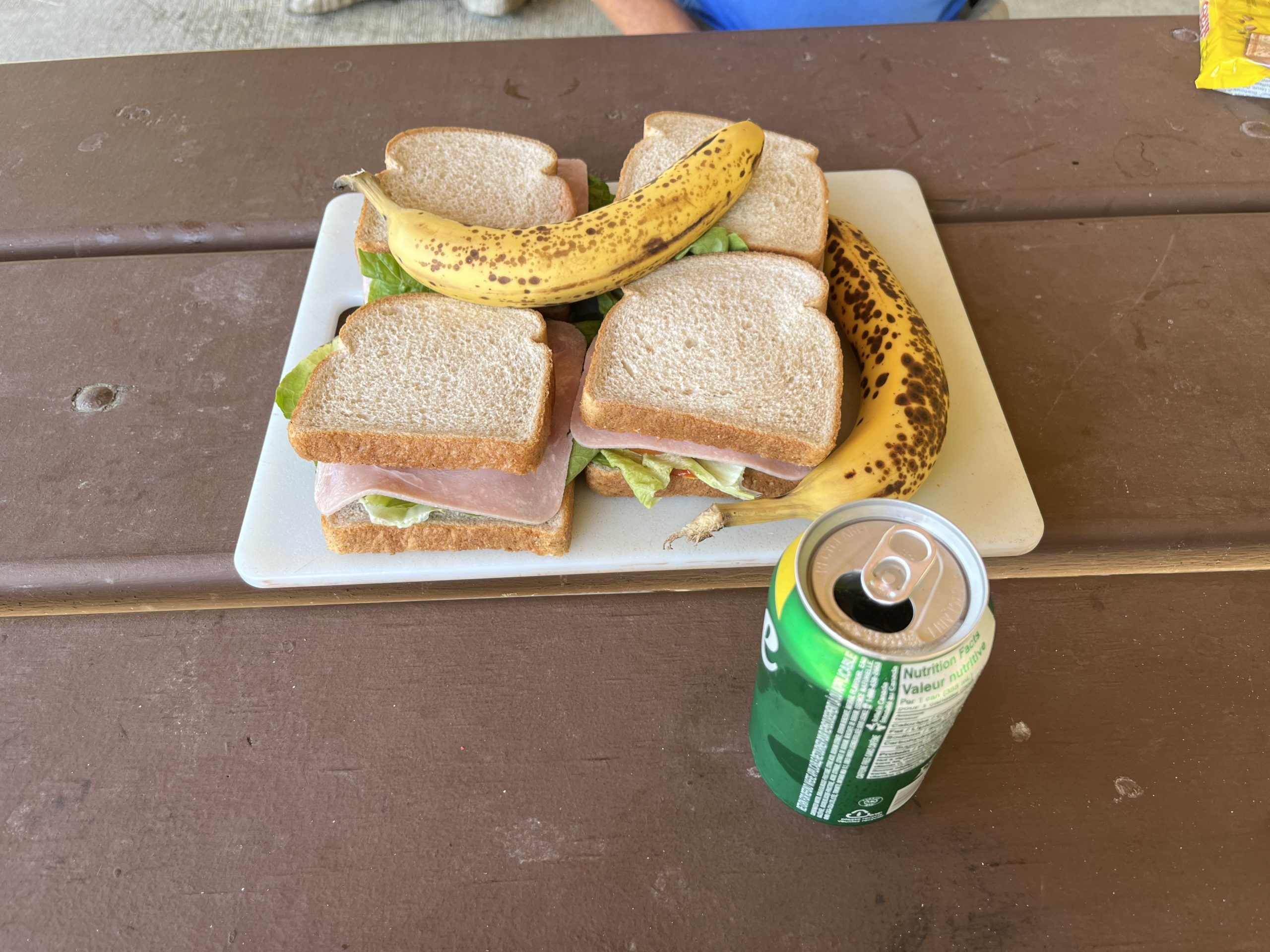 It didn’t take me long to find a hitch with some ladies I had met briefly out on the trail, who were passing by Courtenay on their way home. It was a fun ride of exchanging stories. We almost ran out of gas on the highway, and there was a nerve-wracking few minutes of running on empty before we were able to reach the next Co-op. So eager were we to get home that we hadn’t wanted to stop before it became an emergency!

I got dropped on the side of the highway, and a few minutes later, got picked up by my mom. I’m so grateful to have had the luxury of a mid-island home-base throughout my journey. I couldn’t have asked for a better arrangement – I’m so lucky to have such a supportive mom.

As soon as I unpacked, showered, and laundry-d, I went out to meet my boyfriend who was also visiting town. Though we had been satellite messaging and video-calling when we could, all that was nothing like seeing each other in person – I was so glad to finally reunite, after spending more than a month apart.

So what next? After 41 days of travel (with some zeros in between), I’ve hiked a lot of trail. I’ve been to both the southern and northern ends of the island, and seen a lot in between. But now, I have one final leg to complete, in order to connect it all together. The missing piece was going to be challenging, including the highest elevations of the entire trail. Far from regretting my decision to leave this part for last, I have realized more and more that it was the best decision to make. Over the past few weeks, my confidence has grown a lot, and I finally feel like I might know what I’m doing out there. I’m glad that I can have this confidence in the face of the challenges that this final section of trail has in store.

And so now I rest and prepare for the final push to the end. My finish line will not be Cape Scott, but an unremarkable section of highway. But that’s okay – it will still be mine to wrap into the story of my trek all the same.