The Iceland Traverse: North to South

Iceland is aptly known as the “land of ice and fire.” The island country is home to glaciers, volcanos, waterfalls, lava fields, hot springs, and black sand beaches. Its incredibly varied natural landscape also provides plenty of challenging, yet rewarding hikes. The Iceland Traverse is not one trail, but encompasses several routes going north-south or east-west across the country. This trail profile will highlight the longest north-to-south Iceland Traverse, an approximately 340-mile route beginning at the northernmost lighthouse of Hraunhafnartangi and ending at the southernmost lighthouse, Dyrhólaey.

Editor’s note: The CDC recommends that travellers avoid all non-essential international travel to Iceland at this time due to the pandemic. 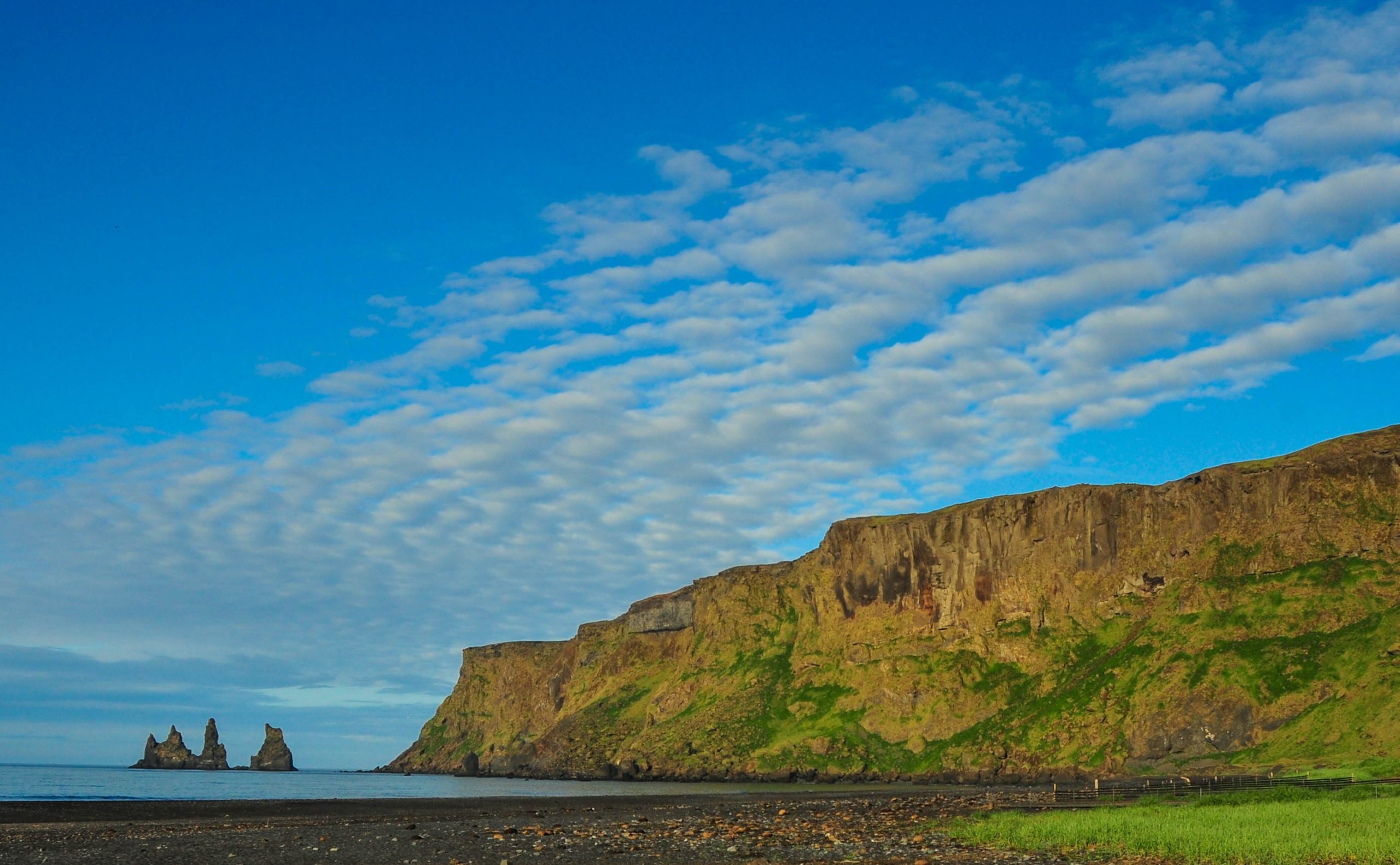 Near the southern terminus in Vík. Photo by Jack Gordon

The northern terminus of the traverse begins on the rocky coastline of the Melrakkaslétta peninsula, just south of the Arctic Ocean at Iceland’s northernmost lighthouse, Hraunhafnartangi. Hikers will then come upon Dettifoss, one of the highest volume waterfalls in Europe. After Dettifoss and Selfoss, another major waterfall on the Jökulsá á Fjöllum, the next major point is Lake Mývatn, known for its relentless midges in the summer season. After hiking around the lake, it’s up to the Odadahraun lava field and into the interior highlands. Once in the Dyngjufjöll Mountains, hikers will encounter the Askja Caldera and the deepest lake in Iceland, Öskjuvatn. 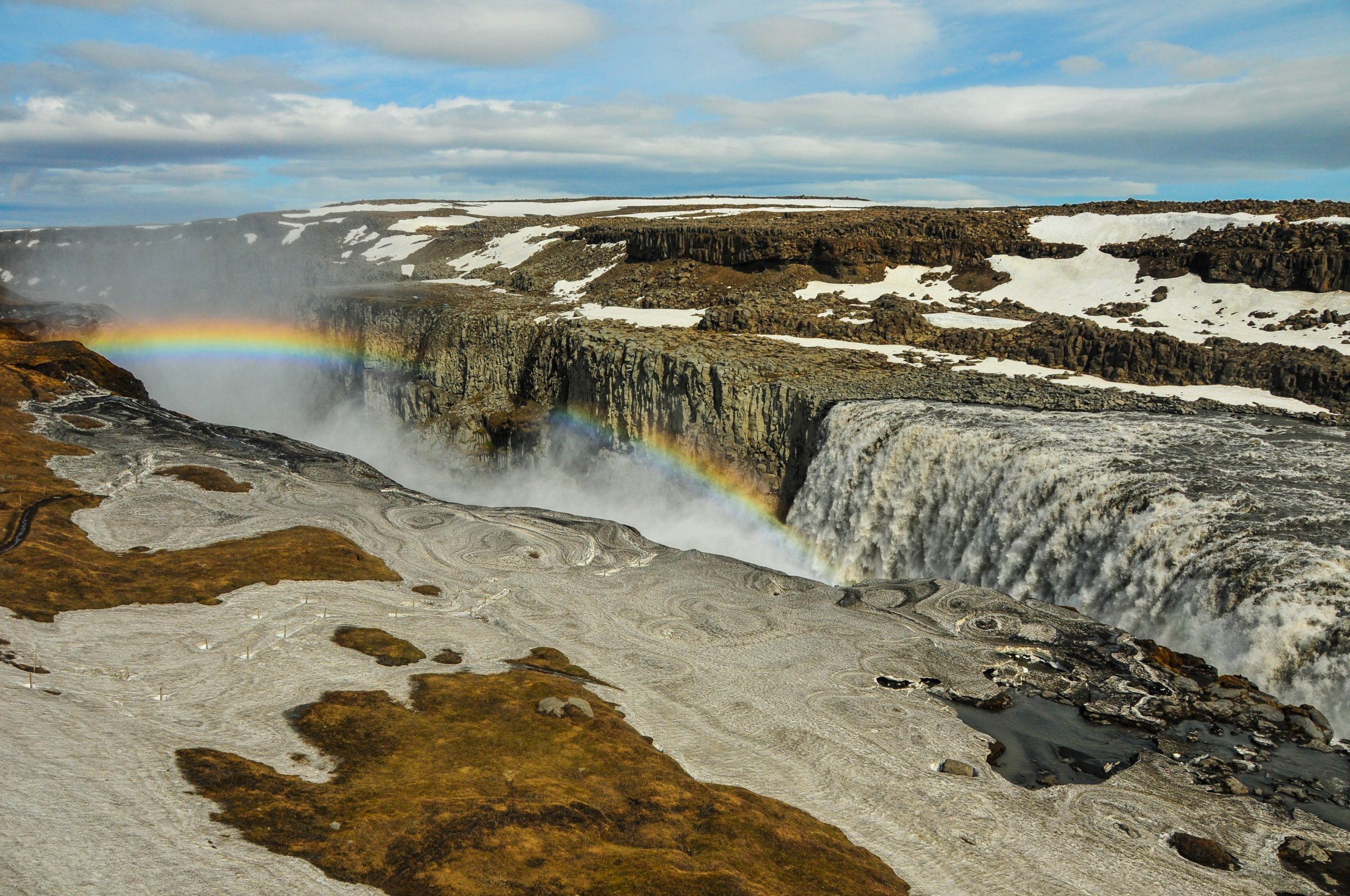 The highest point on the trek is about 3,700 feet in elevation, just beyond the northwestern corner of the Vatnajökull glacier and national park. For reference, the highest point in Iceland is Hvannadalshnjúkur, which is 6,900 feet and located in Vatnajökull National Park.

After hiking around the western edge of the Vatnajökull glacier and continuing through the volcanic ash-strewn interior landscape, the traverse connects with the popular 34-mile Laugavegur Trail in southern Iceland. In this section, hikers will enjoy the rhyolite mountains, dramatic valleys, and the chance to dip in the Landmannalaugar hot springs as they near the southern coastline. After coming upon the dramatic Skógafoss, hikers will have reached the final leg of their journey and head southeast on the Ring Road to the town of Vík and the southern terminus at the southernmost lighthouse in Iceland, Dyrhólaey. The entire traverse can be completed in approximately three weeks.

A close-up of Vatnajökull Glacier. Photo by Jack Gordon

Along the F-Roads of Iceland

Much of the hike follows F-roads, a series of narrow, gravel roads in the highlands. F-roads are open between June and August, and are only passable by foot, by bike, or in a 4×4 vehicle. There are no bridges over the rivers and a defined track may not always be found. However, yellow stakes and signs at intersections consistently mark the roads. The F-roads are generally easy to follow, despite being in an extremely remote area. However, paper maps can be useful in navigating across the country.

Mál og menning maps are a reliable and detailed option. For the most updated maps, Safetravel.is recommends purchasing them upon arrival in Reykjavik at the Penninn Eymundsson bookstore. A map of the entire country that includes all roads plus a map of the Laugavegur Trail should be sufficient, but more detailed maps of each area of the country are also available for purchase. There are also several free online maps to access at home for planning purposes before taking on the traverse.

There are also huts scattered throughout the highlands, but don’t expect to stay in one every night. Hikers are able to tent outside the huts if they’re full with tourists who have made reservations ahead of time. There may be dining areas and showers available for use and rangers are available to answer questions.

Hikers should plan to take on the traverse during the summer months since the highlands can be impassable and dangerous in the winter. The hiking season coincides with the duration that the F-roads are open, which is June through September. Not only are the temperatures warmer in the summer, but the days are incredibly long due to Iceland’s proximity to the northern hemisphere. On the summer solstice in June, Iceland sees over 21 hours of daylight.

Despite longer and (on average) warmer days, that does not mean that hikers won’t encounter inclement weather. Driving rain and high winds may be experienced in the barren and black desert section in the north. In higher elevations, hikers may face hail and possibly snow, even in the summer. If a life-threatening situation should arise, there are emergency shelters along the route that hikers can use. However, supplies inside the shelters should only be used in a life-or-death situation. Anyone attempting the traverse should prepare for cold temperatures, rain, hail, and harsh winds. In short, this is not a hike for beginners. 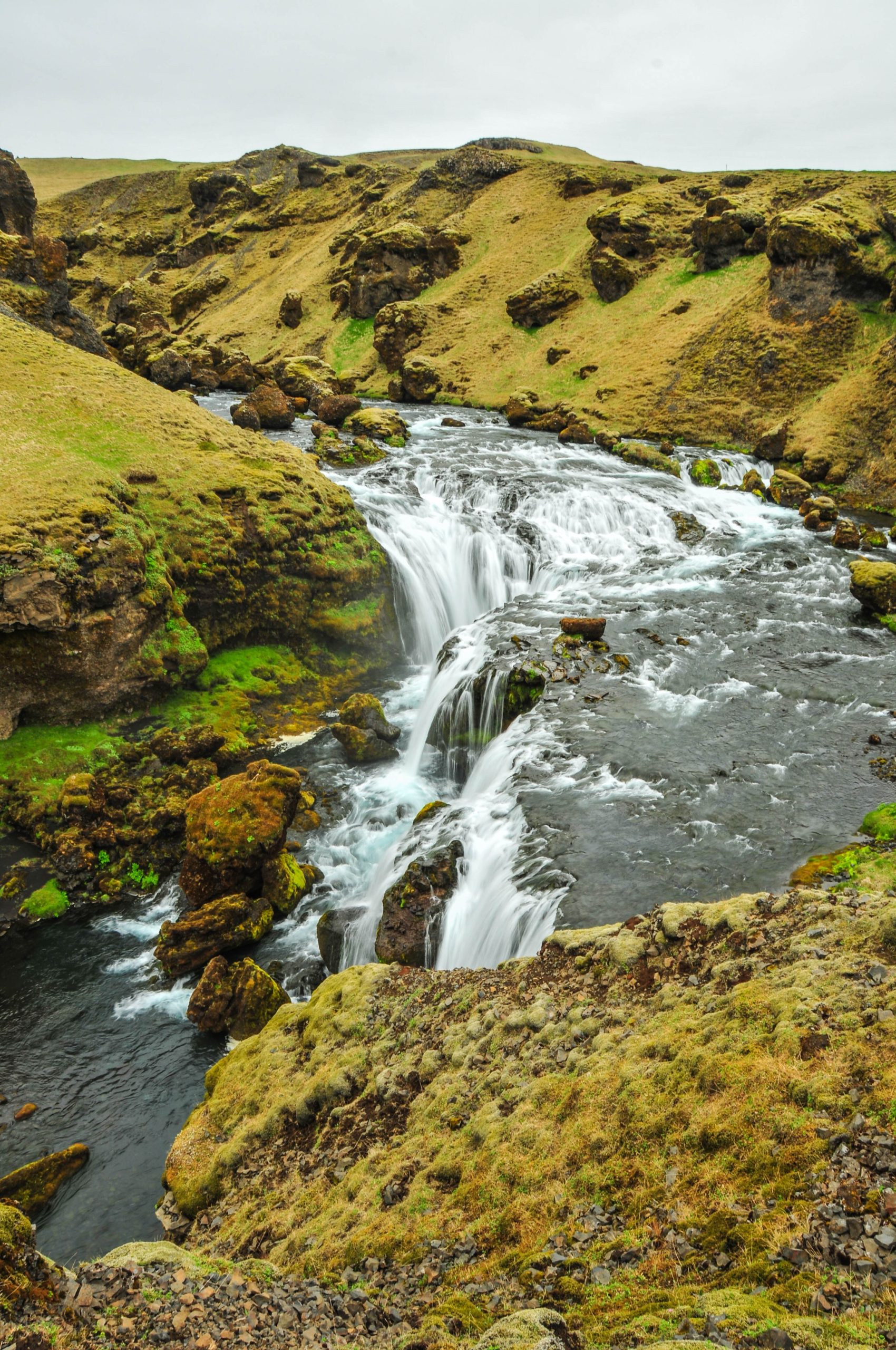 A smaller waterfall just above Skógafoss. Photo by Jack Gordon

Extreme caution should be taken at all river crossings as snowmelt can cause dangerous and even deadly conditions. Hikers should assess depth, width, and current strength at each and every crossing and whether turning around is the safest option.

A visit to the Icelandic Association for Search and Rescue (ICE-SAR) office in Reykjavík, Iceland’s capital, upon arrival can be helpful in determining not only river conditions but any closed roads or other dangers that may inhibit hiking plans. You can always find current conditions on ICE-SAR’s Safetravel website. It’s also best to register your trip online with Safetravel as well in case a search and rescue is necessary. 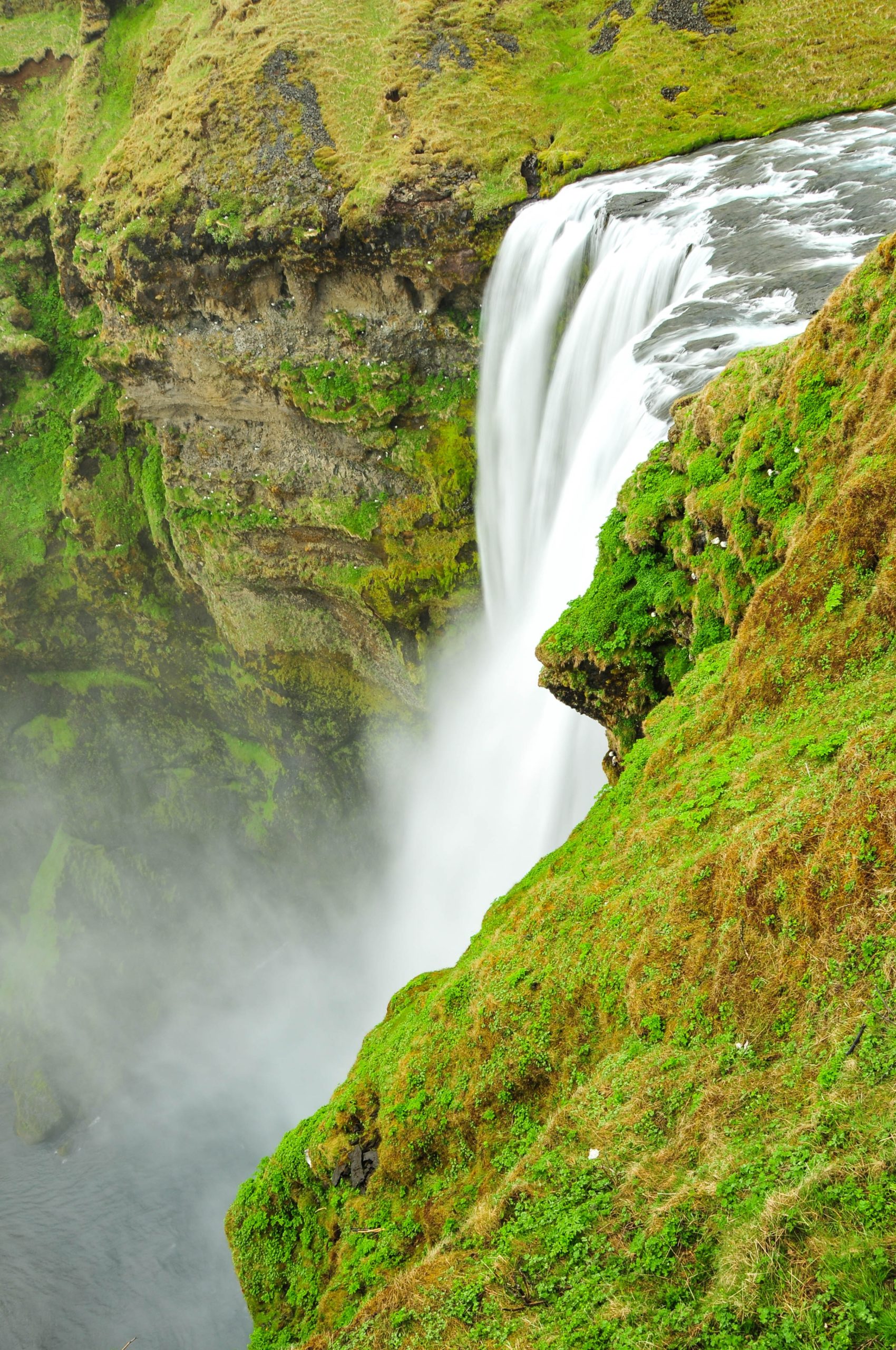 Getting To and From the Termini

The easiest and most convenient entry point into Iceland is by flying into Keflavík International Airport and taking a bus north to the capital and largest city, Reykjavík. Straetó, Iceland’s public bus system, has a direct route that runs daily between Reykjavík and Vík, the southern terminus of the traverse, on the #51 bus. The journey takes about 3 hours.

It’s a bit more challenging to get to and from the northern terminus at the Hraunhafnartangi lighthouse, which is about 6 miles from the town of Raufarhöfn. One option is to take the #57 public bus to Akureyri, a 6.5 hour journey from Reykjavík. Then, hikers can take a 1.5 hour bus trip to Husavík on the #79. There is no bus that goes to Raufarhöfn, so the remaining 90 miles will need to be covered by hitchhiking.

There are a few key pieces of gear that will be useful on a trek through Iceland: 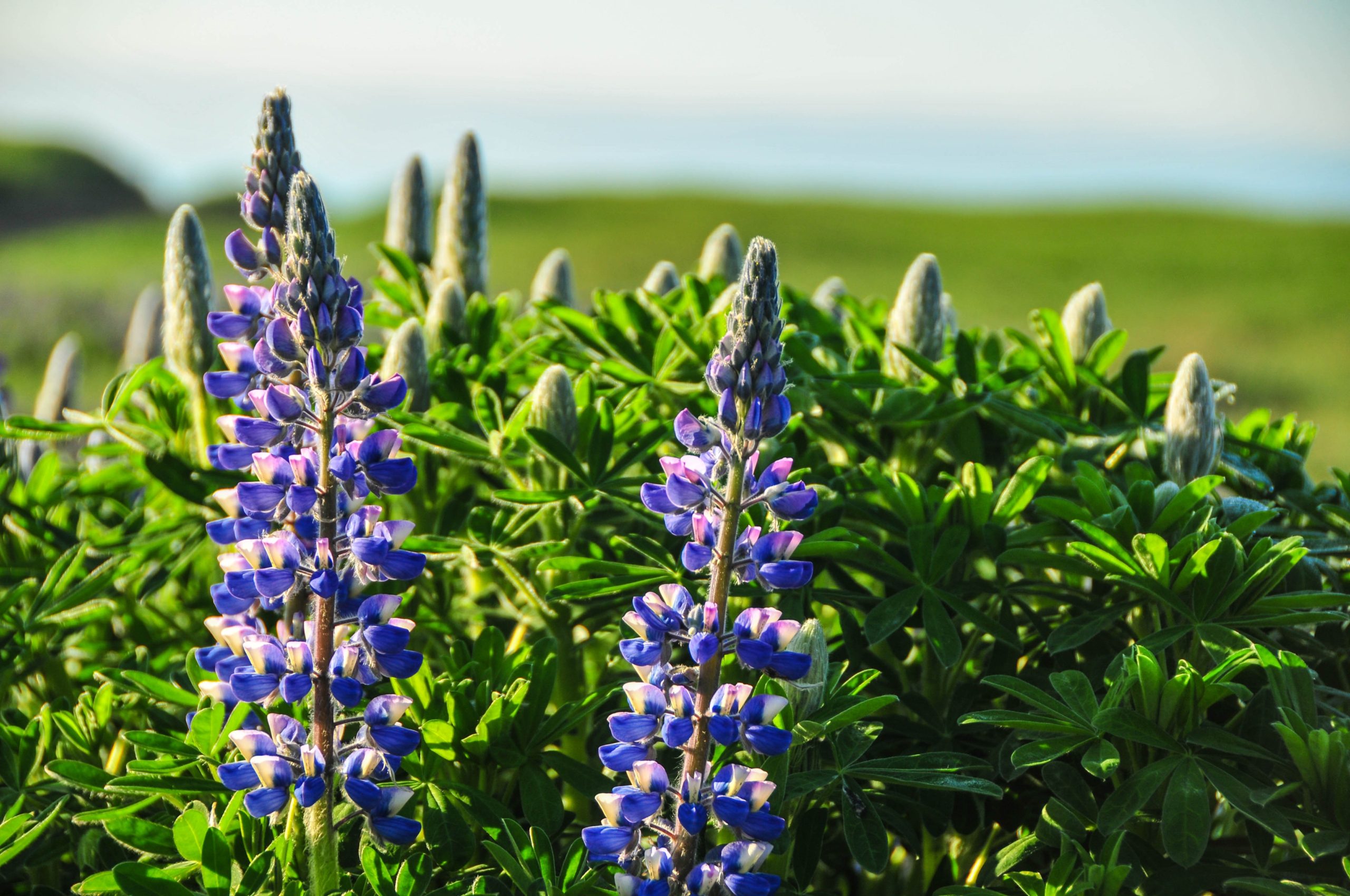 The only land mammal native to Iceland is the arctic fox, so there is no need to worry about dangerous wildlife encounters. Other non-native wild mammals include mink, mice, and rabbits. At the coastal beginning and end of the traverse, hikers will see variety of birds and possibly seal and whale sightings. It wouldn’t be a trip to Iceland without seeing sheep, which have endured the country’s harsh weather conditions for centuries. 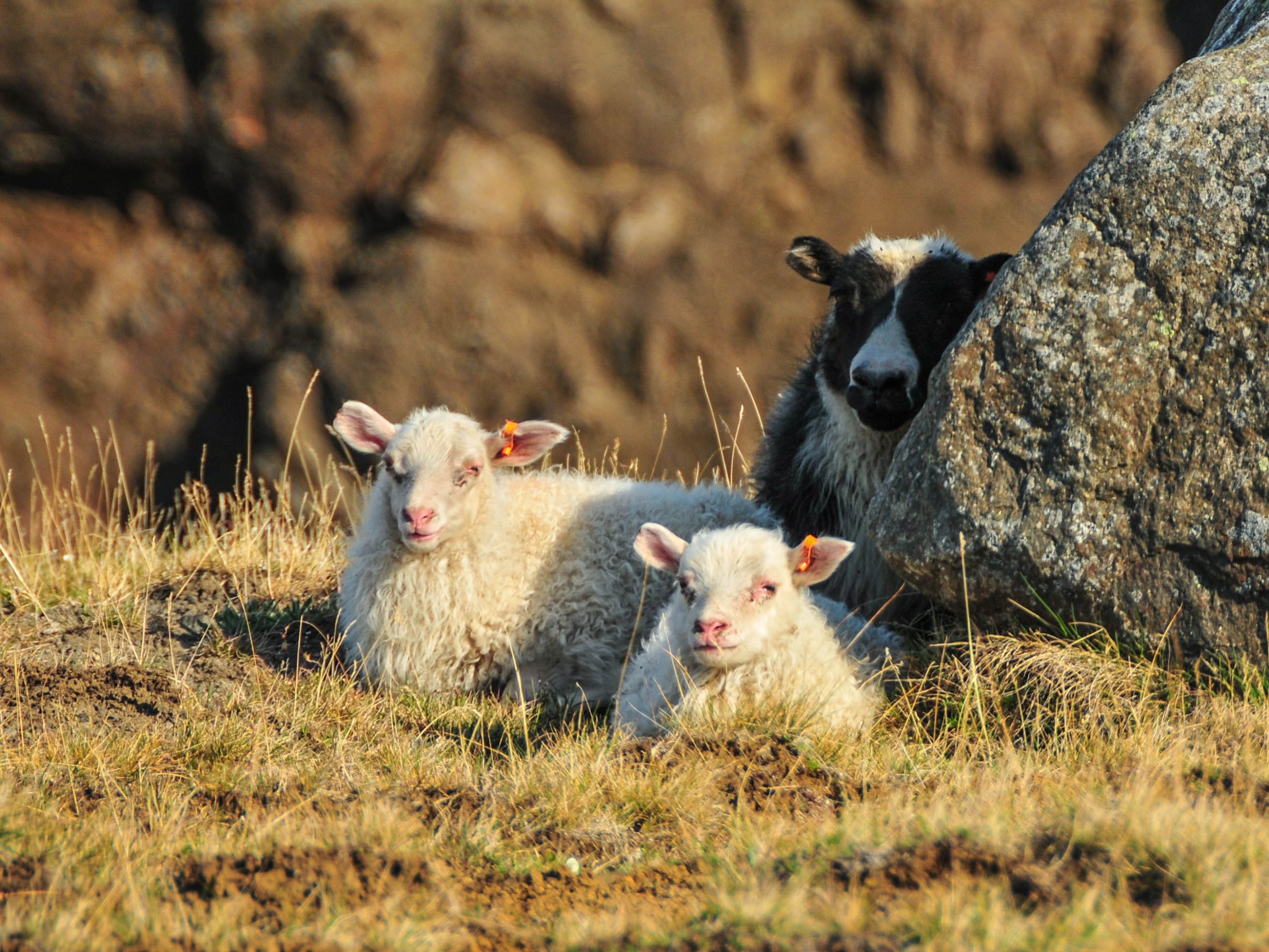 To Sum It Up

While the weather and landscape can at times be harsh, the Iceland Traverse is truly a hike like no other. While the hike is short in comparison to many more well-known trails, the tough demands of the north-south traverse from Hraunhafnartangi to Dyrhólaey will most certainly pay off with the reward of incredible natural beauty each and every day. Essential Considerations for International BackpackingEditor's note: This story was written prior to the outbreak of COVID-19 and therefore does not touch upon pandemic specific considerations.  You are strongly encouraged to do your own research regarding limitations for travel outside the United States. In the…Read More