We set the alarm for 5 am once again because we had 6.8 miles to get to the pass and we wanted to be traveling on crunchy snow. The mornings traverse was through nice dense greenery for a long time before we started to climb upward and we saw a record number of deer. (11!!!) 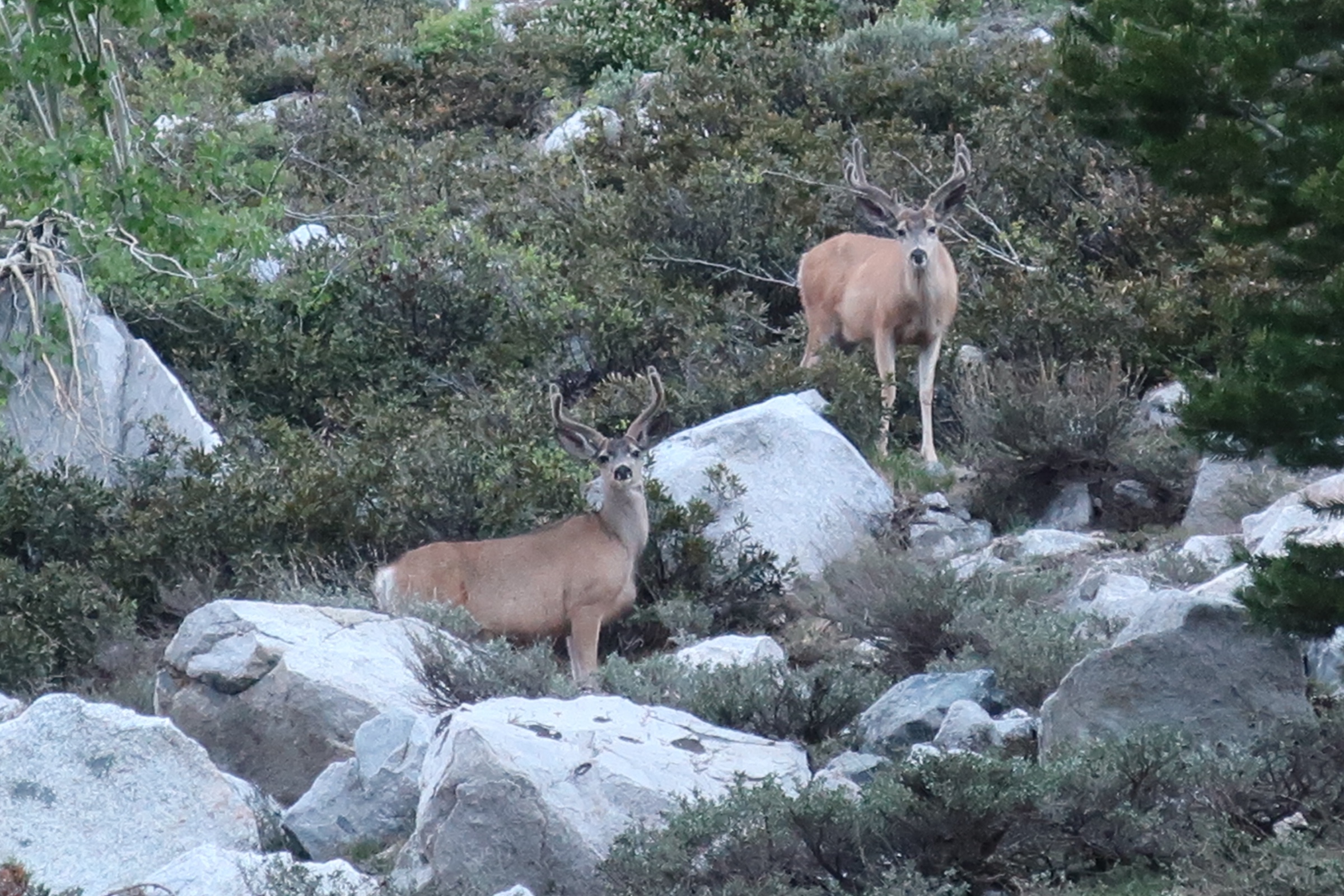 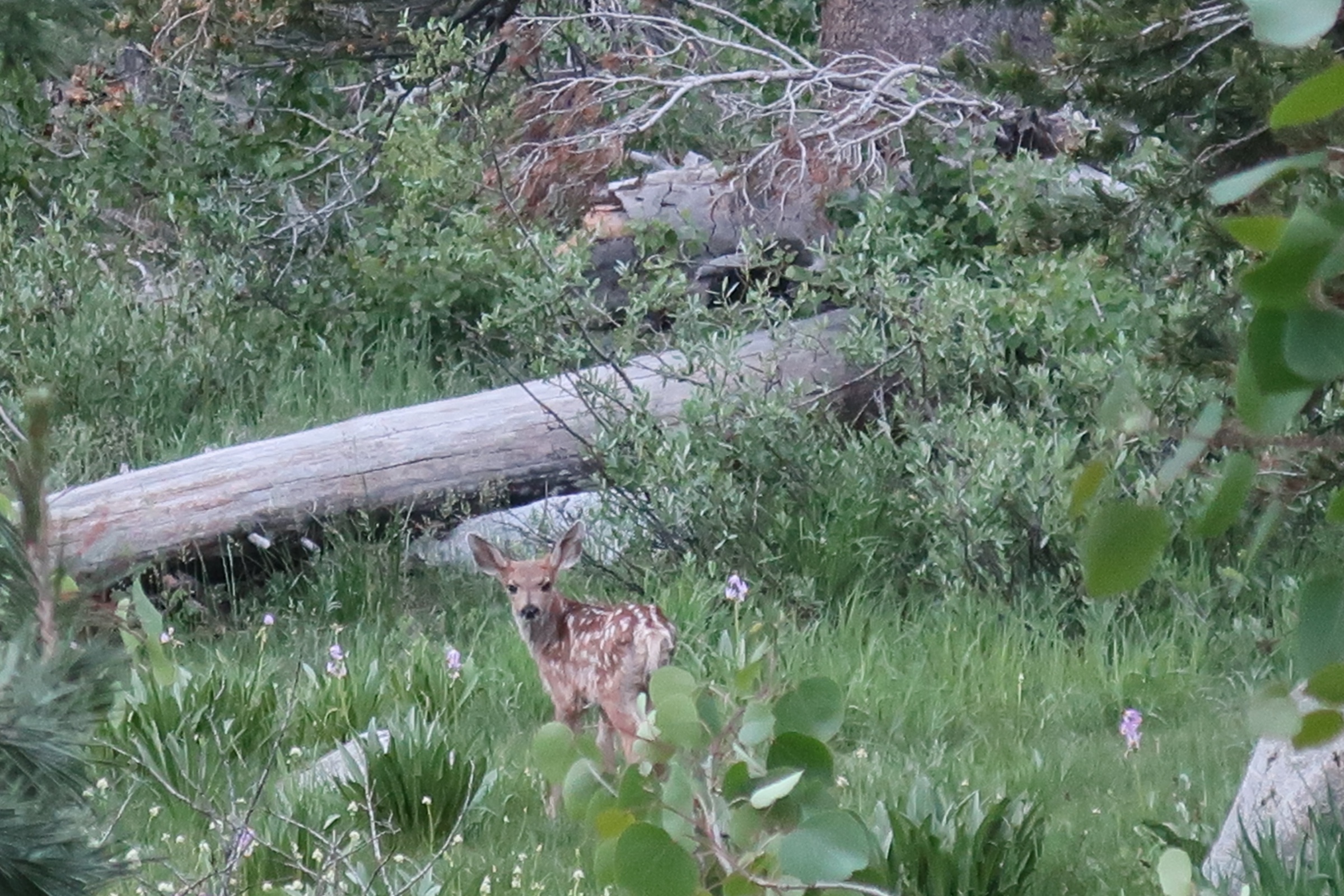 After climbing higher we finally hit snow and the real fun began. The final 4 miles to the top were all snow covered making for our longest snowy trek yet. It was pretty cool seeing the path through the snow etched out for us. We didn’t have to do any searching around and we could just go for it. 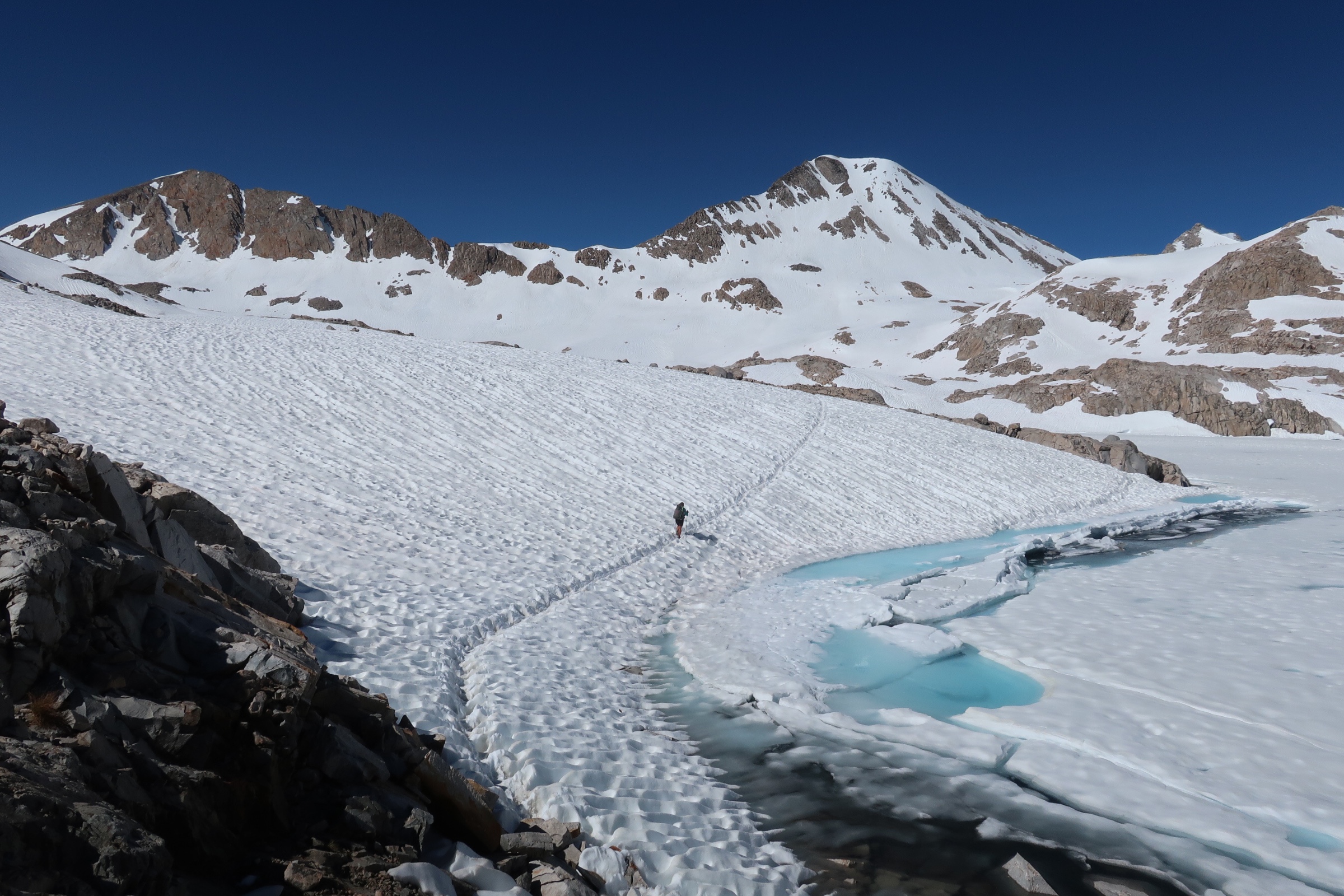 There were some steep parts but nothing scary. The snow was crunchy but starting to soften up to the perfect consistency for making safe steps through the snow. Everything was going great and before we knew it, Muir hut (a rock building built in 1931 sitting on the pass for hikers to use in case of inclement weather) was appearing over the horizon. 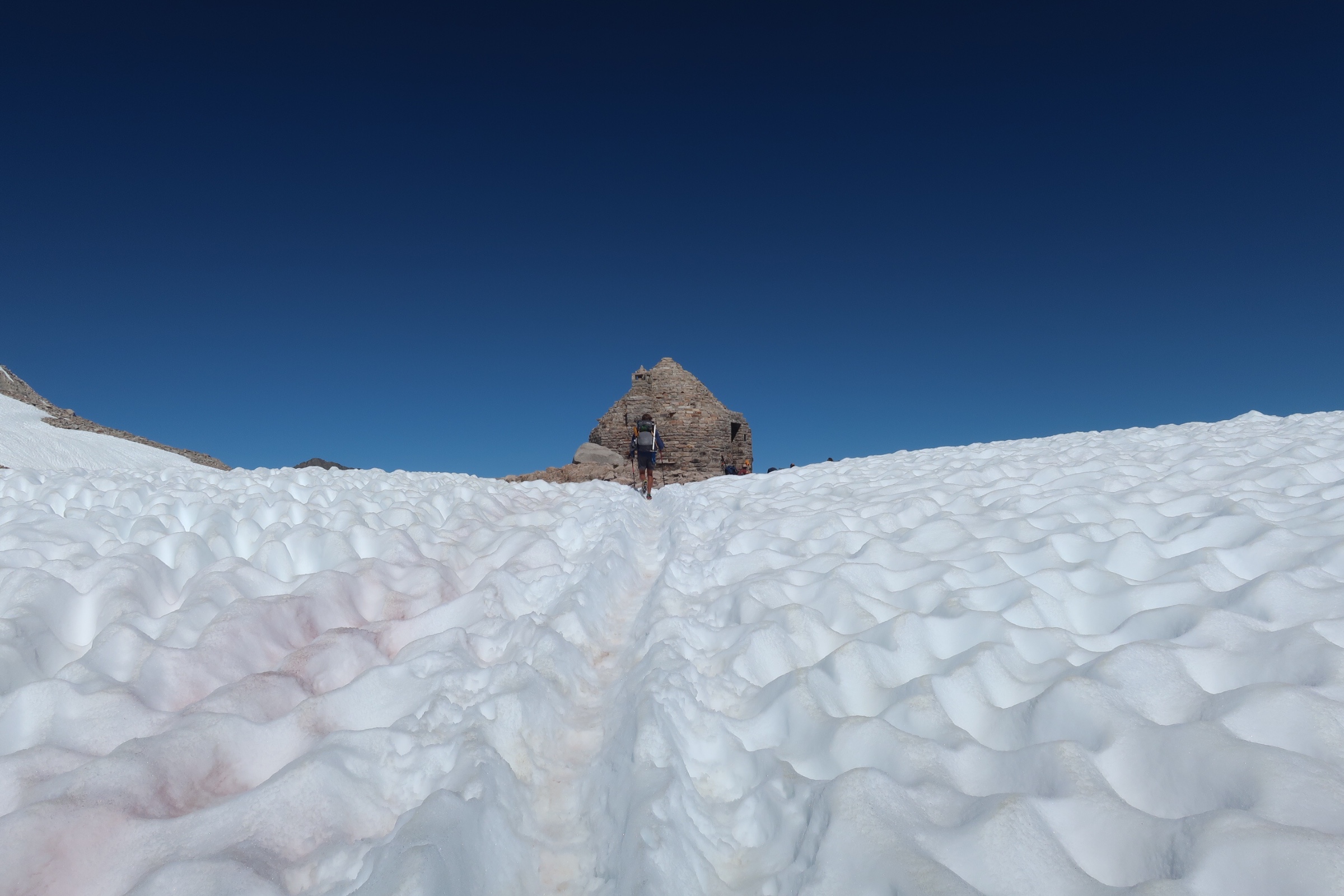 Cody and the Muir hut

We hit the top around 10am and were greeted by a crowd of other PCT’ers sitting at the top enjoying the views. We learned later that some of them had slept over night in the hut and we were semi-jealous of their experience. We sat and chatted, enjoyed some laughs, snapped a few pictures, and headed down the mountain. 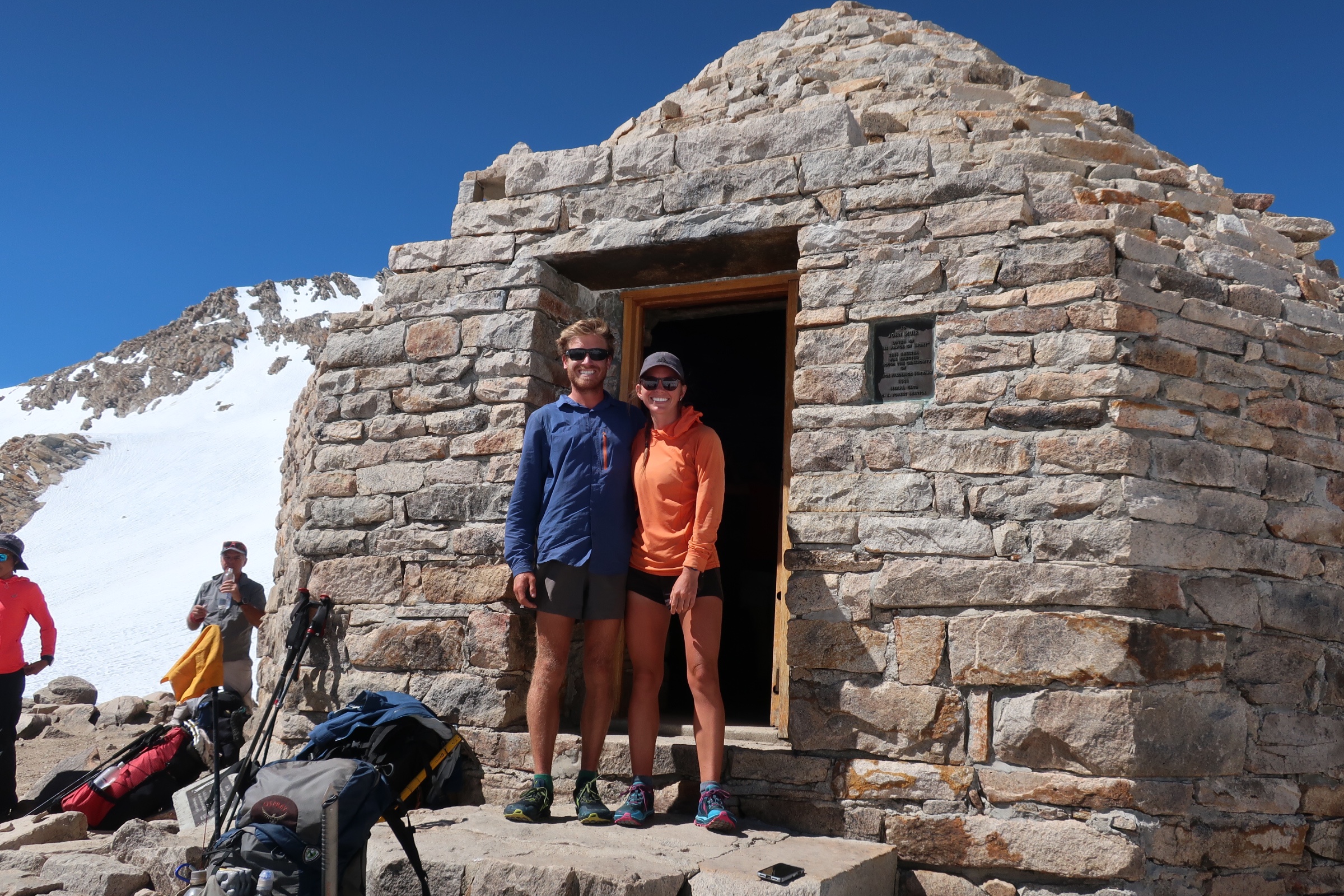 Two kids and a hut

There were another 4 miles or so of snow after the pass so we had a slippery descent. We made our way sliding through the snow and soppy ground, falling here and there and having a grand ol’ time. We walked around the mostly frozen Wanda Lake and actually walked right over top of it in some parts. 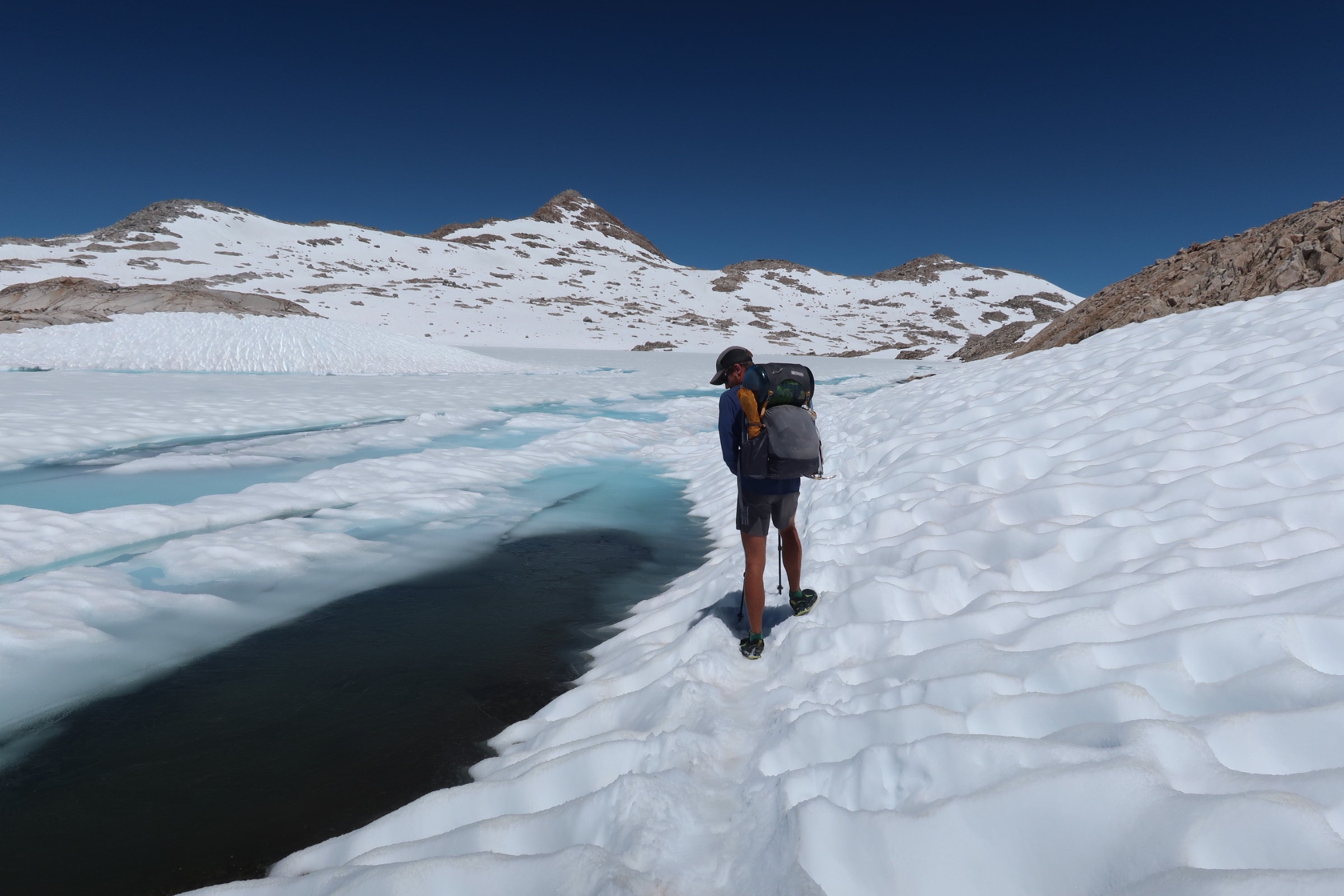 Cody deciding if he wants to take a dip

After what felt like ages, we finally made it back down onto solid/dry ground. What a glorious feeling! On our descents we are usually a little more carefree and reckless (some might say). We try to make up some lost time from the ascent and the snow’s usually slushy and in no way painful to fall into. So it all works out perfectly! 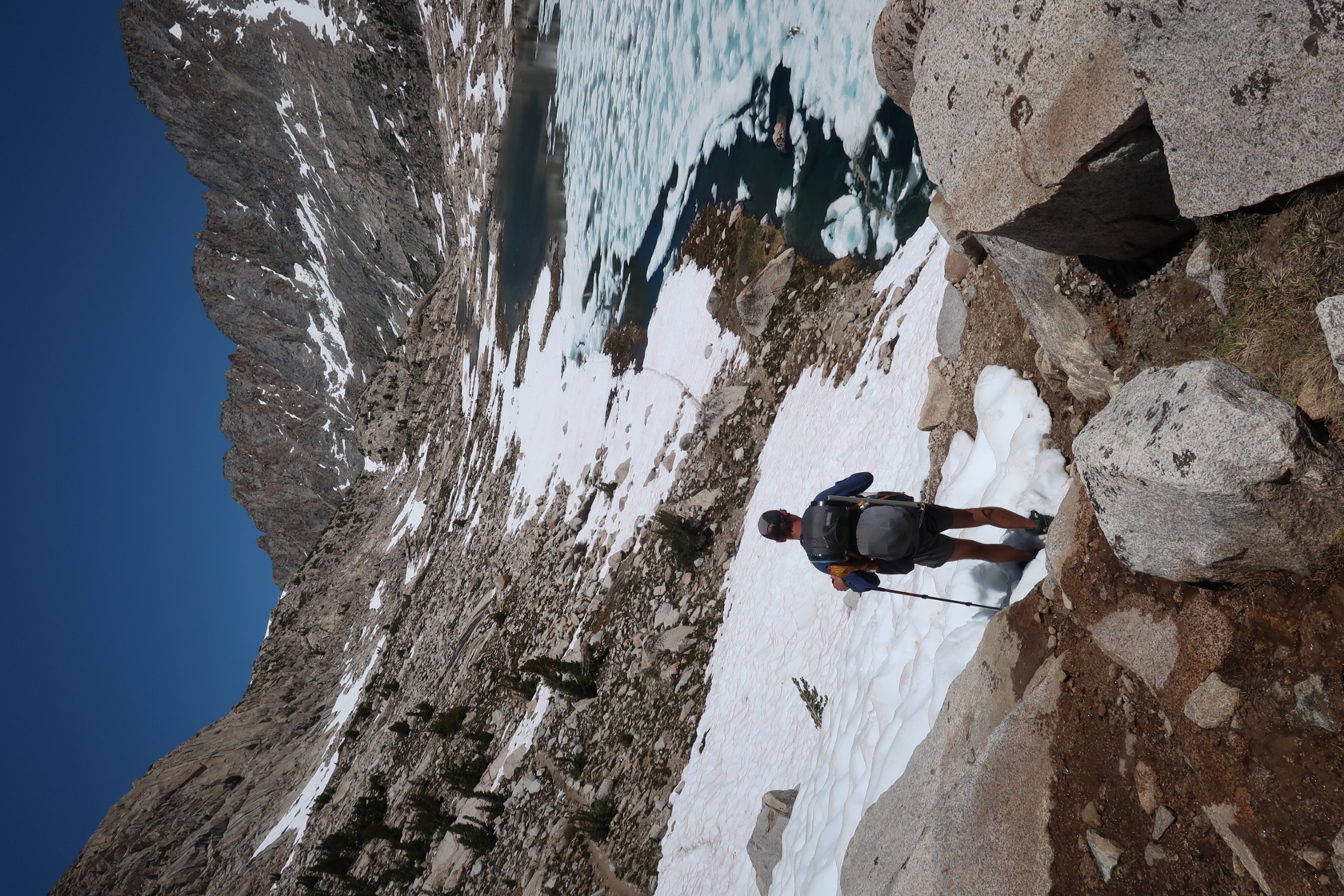 We sat on a rock overlooking Evolution Creek, took all of our shoes and socks off to dry out, and pulled out our lunches. Our feet get pretty gnarly after sitting in snow-sopped shoes for hours so it’s always nice to air out the dogs! We enjoyed listening to the water gushing through the creek and having the sun warm our pruned toes. Before we knew it, it was time to get moving again.

We crossed the creek just in time to wet our newly dried feet and stayed on wet trail for a large portion of the day. On our way down to Evolution Lake we had to cross many streams and we got lost several times when the trail disappeared into snow or water. 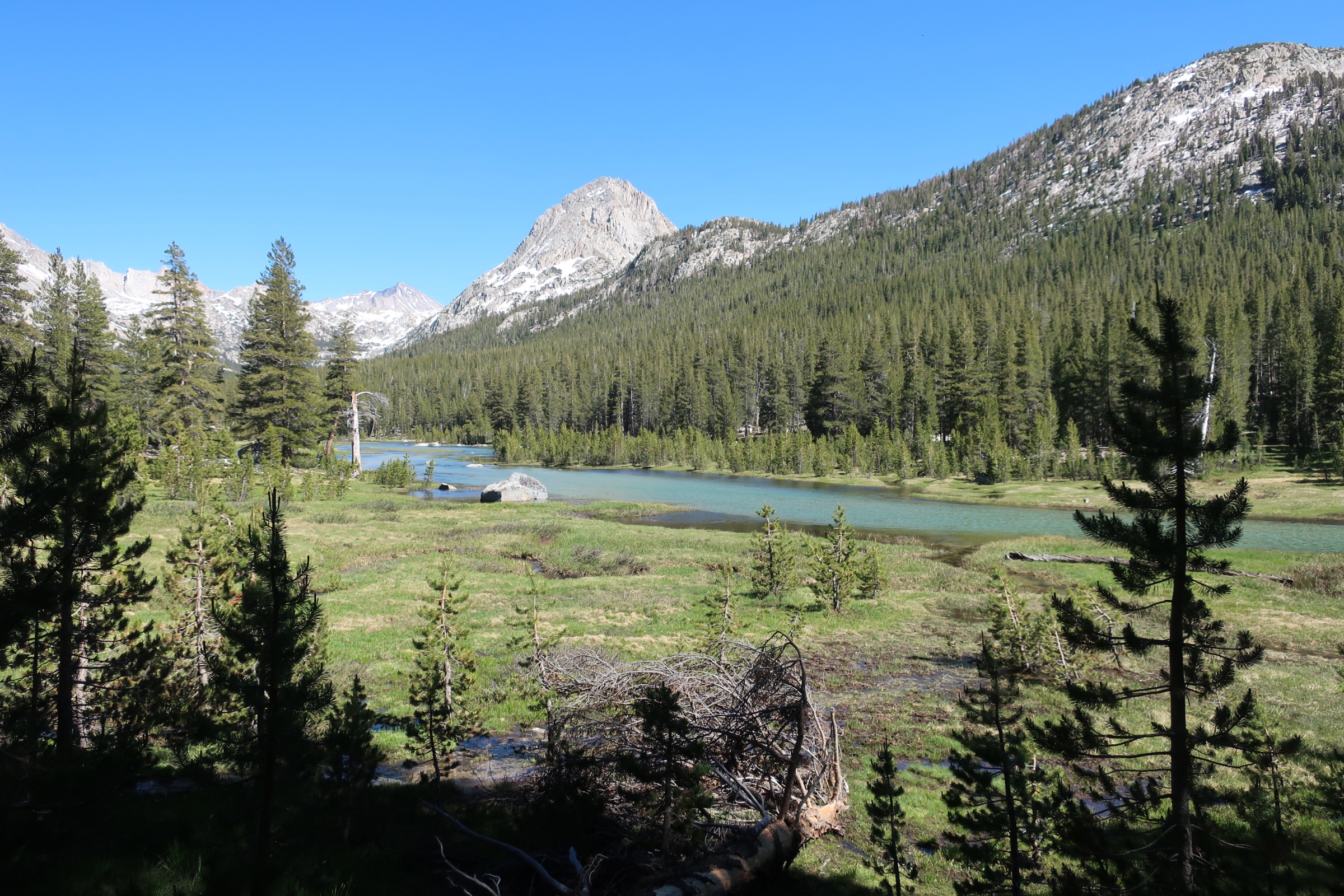 We made our way around the lake and were then free to cruise downhill snow-free for a long time. Our feet actually dried! It was miraculous to have so many miles of dry land in front of us! Until… Pretty much any time your feet dry out you can nearly guarantee there will be a water crossing coming up. And boy was there ever… the normal Evolution Creek crossing can be dangerous in normal years, and this is no normal year. We chose to take the trail marked “alternate” a safer choice during high water times. We were slopping around in a swampy meadow getting eaten alive by mosquitos when Nomad walked up. He chose to take the alternate route as well and we all ended up thoroughly confused as to where the trail was. We found the creek eventually (it was flowing slow and calmly as compared to where we would’ve crossed on the normal trail). Cody was the guinea pig and went first across. He lifted his pack over his head and carried it and it was a good thing too because the water hit him at his chest at the deepest part. Nomad crossed next a little down stream and was only in to about his hips. Cody came back to get my bag because if I would’ve tried to carry it across I’d have been swept away. I went over on my tippy toes and was belly deep. It was one heck of an “alternate” but you never really know what you’re going to get! 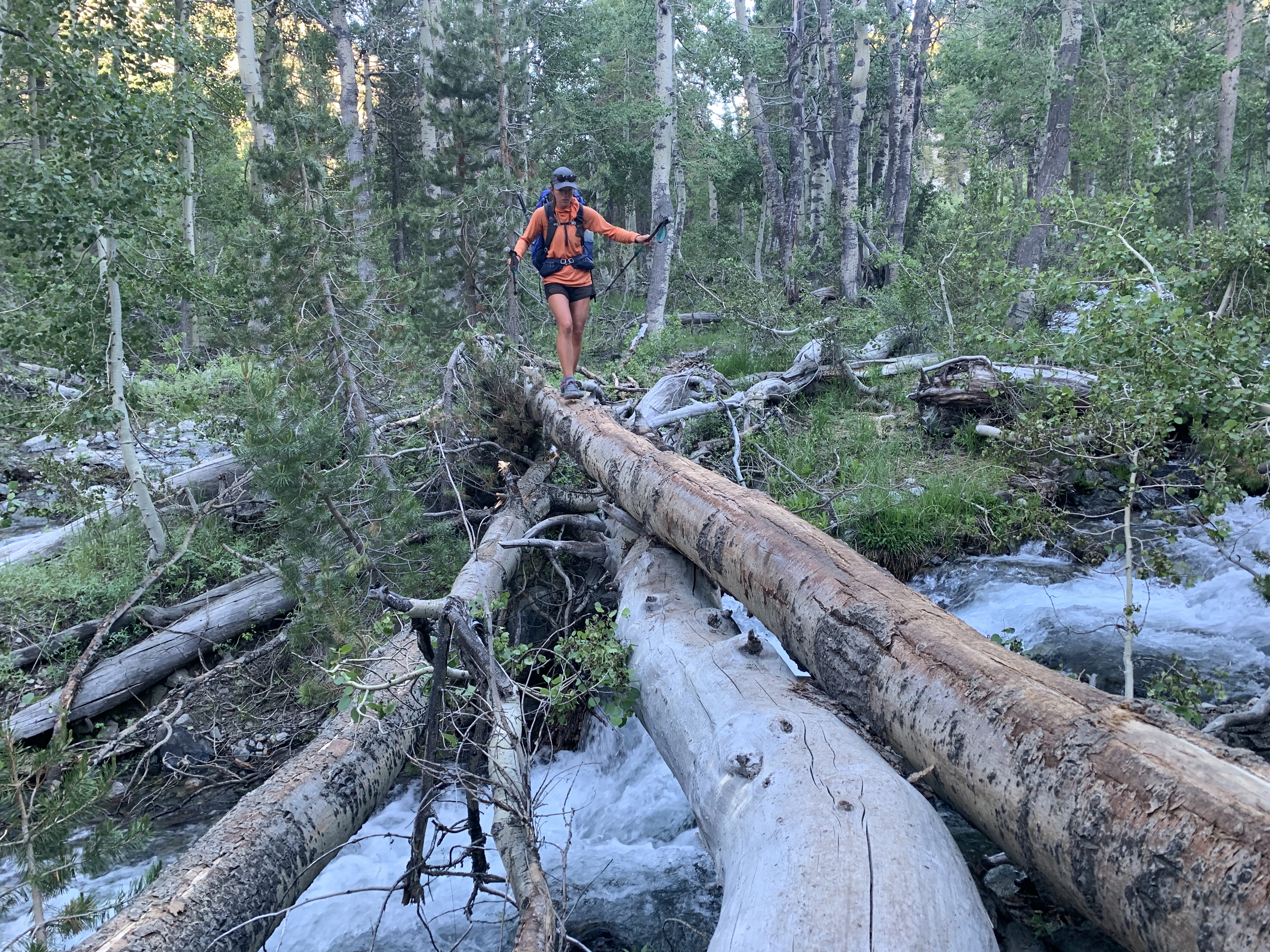 The rest of the day was easy as pie and we cruised through letting all of our clothes dry in the open air. When we arrived at our campsite around dinner time, the mosquitos were once again out to kill. Cody made our very first on-trail fire and smoked the mosquitos out. We decided we would 100% be buying some bug spray with Deet at our next town stop. 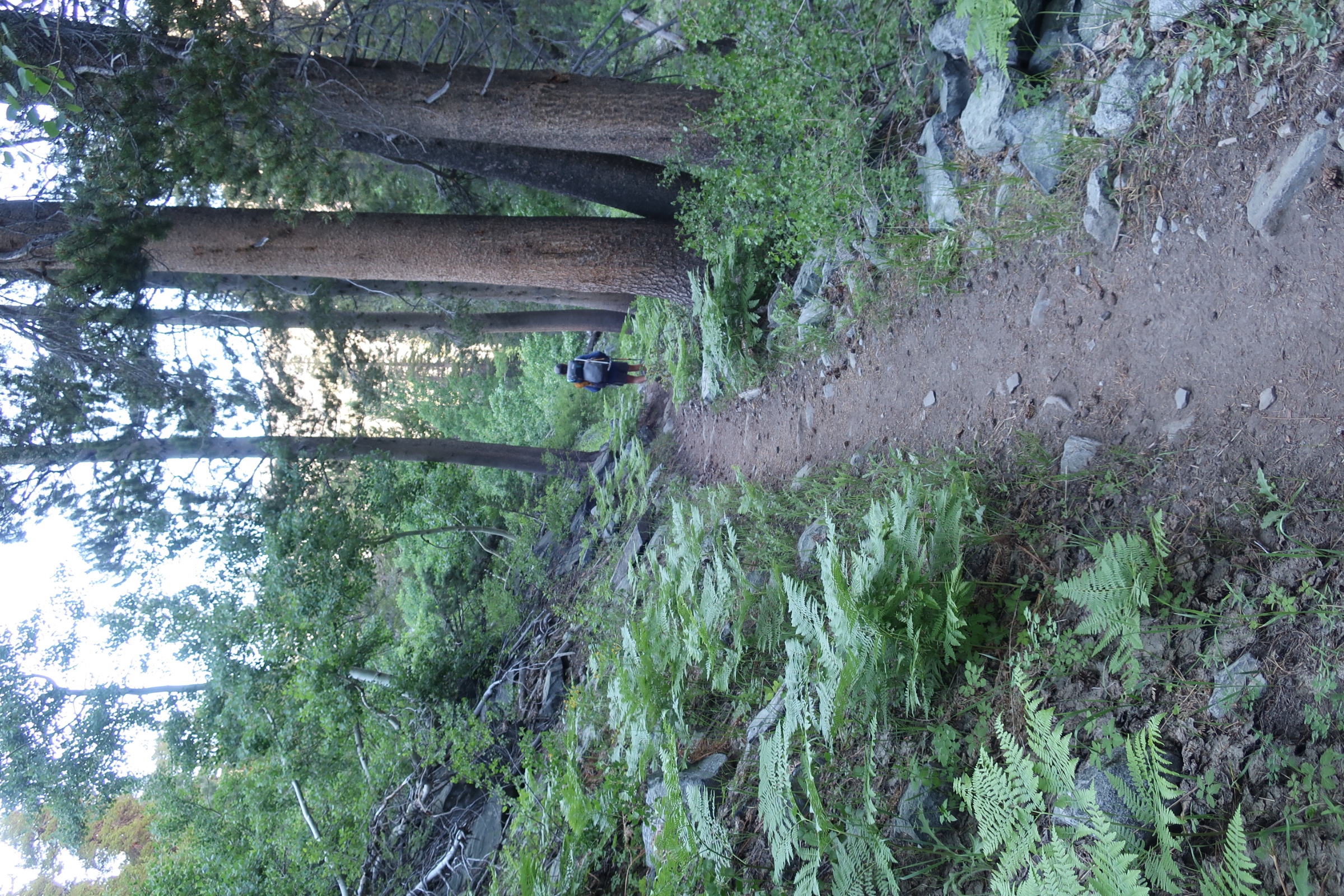 It was a fun and eventful day as most have been recently. There’s never really a dull moment and if there is, the mosquitos will be sure to liven things up. We have officially marked Muir Pass off the checklist leaving only Selden, Silver, and Donahue passes to be conquered. The Sierra’s are such a treat! 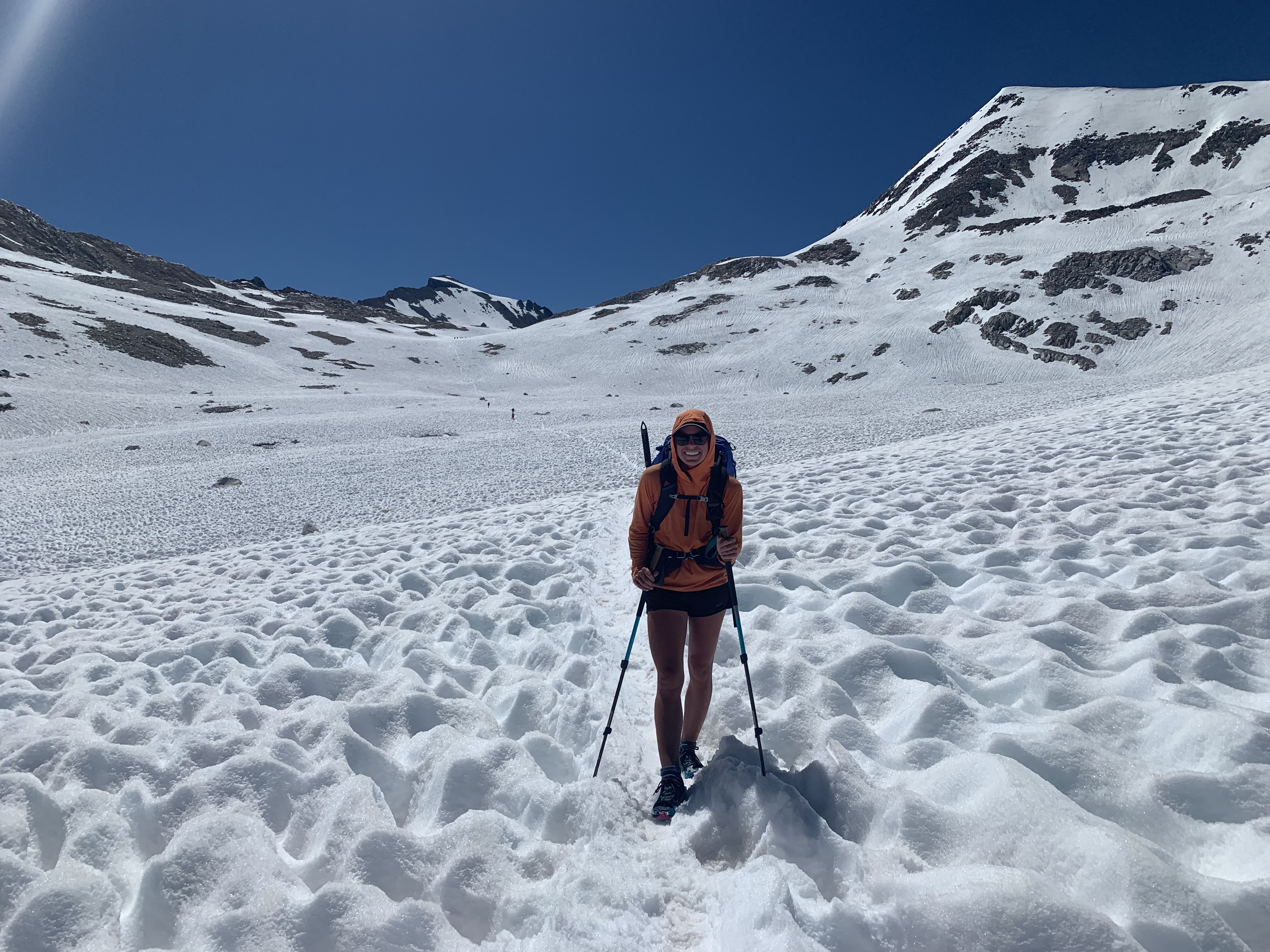