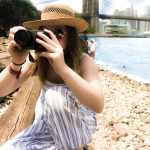 The Prairie State, Two Girls, and One Summer

Howdy! We started this journey walking the trails of Starved Rock State Park in Ottawa, Illinois. As we hiked, we came up with the idea to visit every single state park in Illinois. On one of the informational signs at Starved Rock we saw something about a fort at Matthiessen State Park that was only a mile away. We excitedly planned to go there next, and while we sat at the Starved Rock visitor’s center eating lunch we Googled the number of state parks in Illinois: 73. With this momentos lunch at Starved Rock, our journey began.

Starved Rock has a special place in our hearts, because it was the first park we’ve been to and where the idea of our journey was born. We went on a 6 mile hike full of trees, rocks, and waterfalls. This is one of the popular destination state parks, so there were a lot of people there compared to other parks. Other people aren’t really a bad thing on the trails, though, especially when they unknowingly walk right through a spider web, clearing it for you, not even pausing to ponder why Devin is awkwardly moving her body trying to get through it. The best part of the whole park revealed itself to us at the end of our hike, when we went to the visitor’s center for lunch. The food is so amazing that we came back again just for the food, and according to Devin they serve, “the world’s best cheeseburger.”

Matthiessen State Park is the hidden gem that resides in the shadow of Starved Rock. We wandered into the park (the start of our spontaneous journey) expecting to see another park, well, like Starved Rock. It is not like Starved Rock. There are some picnic areas, bathrooms, the fort that’s kind of just a small log building, and then the start of the trails. There are trails on either side of this canyon and this really cool staircase that takes you down to the bottom of the canyon. A bunch of people come in their bathing suits to go swimming by the waterfall. We were walking at the bottom of the canyon and we were struck by the beauty, but then we turned around and saw the bridge that goes across the canyon from below and it was, pardon the sappiness, magical. It was this feeling that has made Matthiessen State Park our favorite state park to date.

Buffalo Rock State Park is not the most spectacular state park. The river overlook over the Illinois River was pretty nice, but the “river bluff” area that was the whole point of the park was kind of a let down. I don’t really know why the bluff was an bluff and the overlook was an overlook, but regardless it wasn’t the best park but definitely not the worst.

We happened upon Illini State Park by following some signs off the highway on our way home from the first 3. There was a road through the forest which we took. On our drive we went to the memorial oak forest, which had oak trees planted for fallen veterans. The whole feel of the forest was incredible, linking nature and valor in a really meaningful way.

G. Stratton State Park was another of-the-highway adventure. This one, per Devin’s request, we were going to find solely on the signs posted along the streets. This proved a bad idea, and we had to pull out a gps to help us get there. It was still hard to get there. But, once we finally arrived at the park, we realized it was closed due to flooding. We parked our car, got stared at by the people congregated outside of the park’s entrance having a picnic or something, and left.

Howdy! We're Devin and Michelle aka The Park Core. We are not AT hikers but we ARE best friends who have made it our mission to visit all 73 state parks in our home state of Illinois. Our car rides between the parks are filled with (mostly) friendly chats and a whole lot of country music. The parks don't always have hiking (some of them have boundless disappointment) but we go on hikes at every park we can. Peace out girl scouts