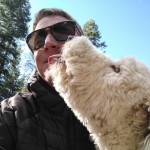 The Swiss Army Knife of Modern Thru Hikers: A Mobile Phone

I tried to write this post on the computer in the lobby of the Super 8 in Erwin, TN, but fate would not allow it. There I was typing away on a real keyboard when, BOOM: Blue screen of death. Denied.

One month into my journey and I’ve adapted to doing everything online via my mobile phone. And one fact remains: I really really hate virtual keyboards.

Technology is too good to leave it at home

This realization is one I kinda hate to admit: We’re out here in nature but end up relying on our mobile phones and apps for navigation, weather reports, photography, gear research, entertainment, and keeping up with others at home and along the trail. 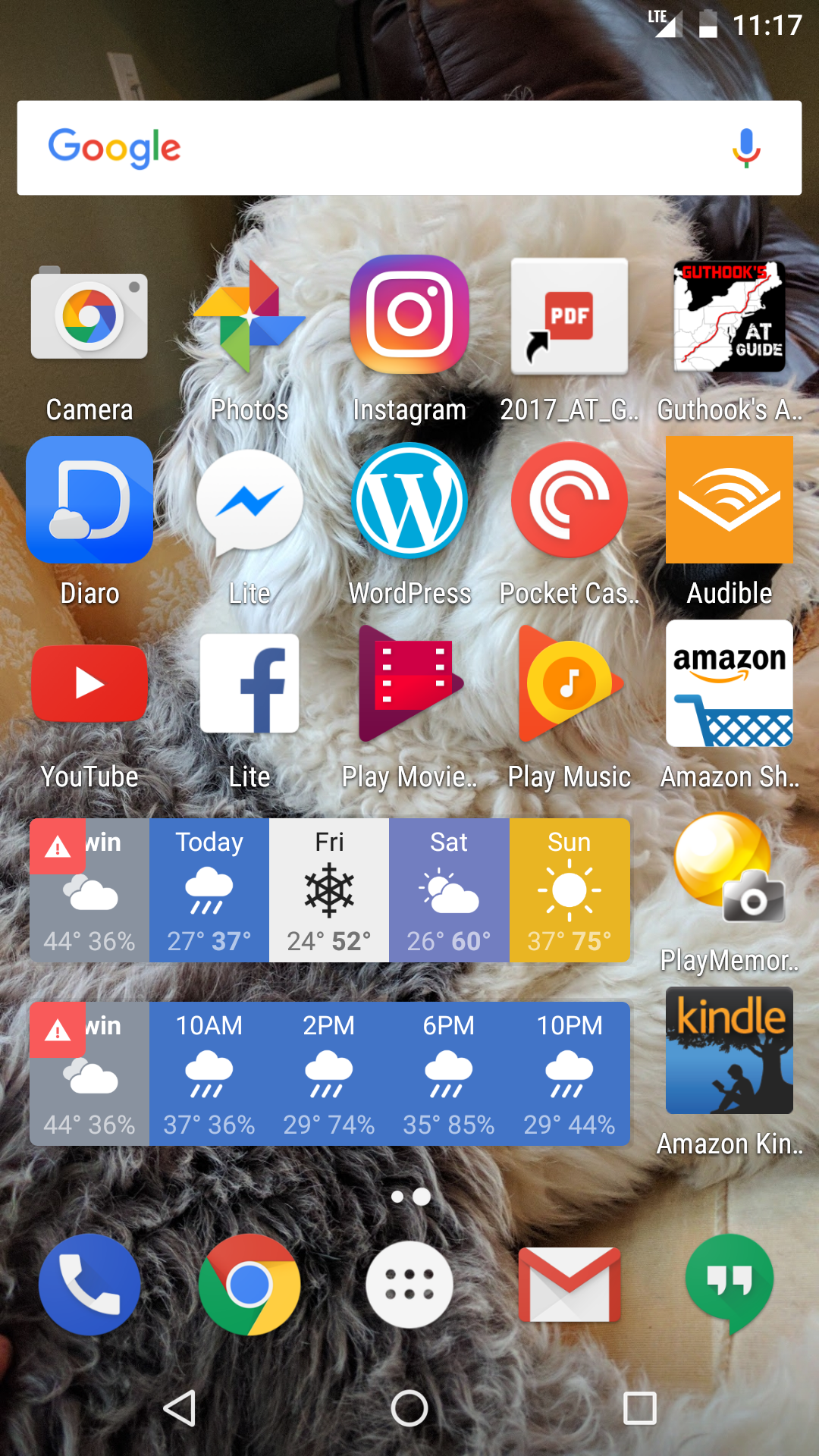 My current home screen with the apps I use the most

Navigate the trail with ease

Guthook’s AT Guide (available on Android and iOS) is outstanding on the trail. It crashes quite a bit, but is without a doubt the most important app on my phone. I should mention that it isn’t cheap: $60 for the entire Appalachian Trail.

I was able to download the maps and photos of waypoints ahead of my journey, so no mobile signal is required to use the app.  My phone spends most of the day in Airplane mode anyways, so without offline abilities, the usefulness of Guthook would severely deminish. 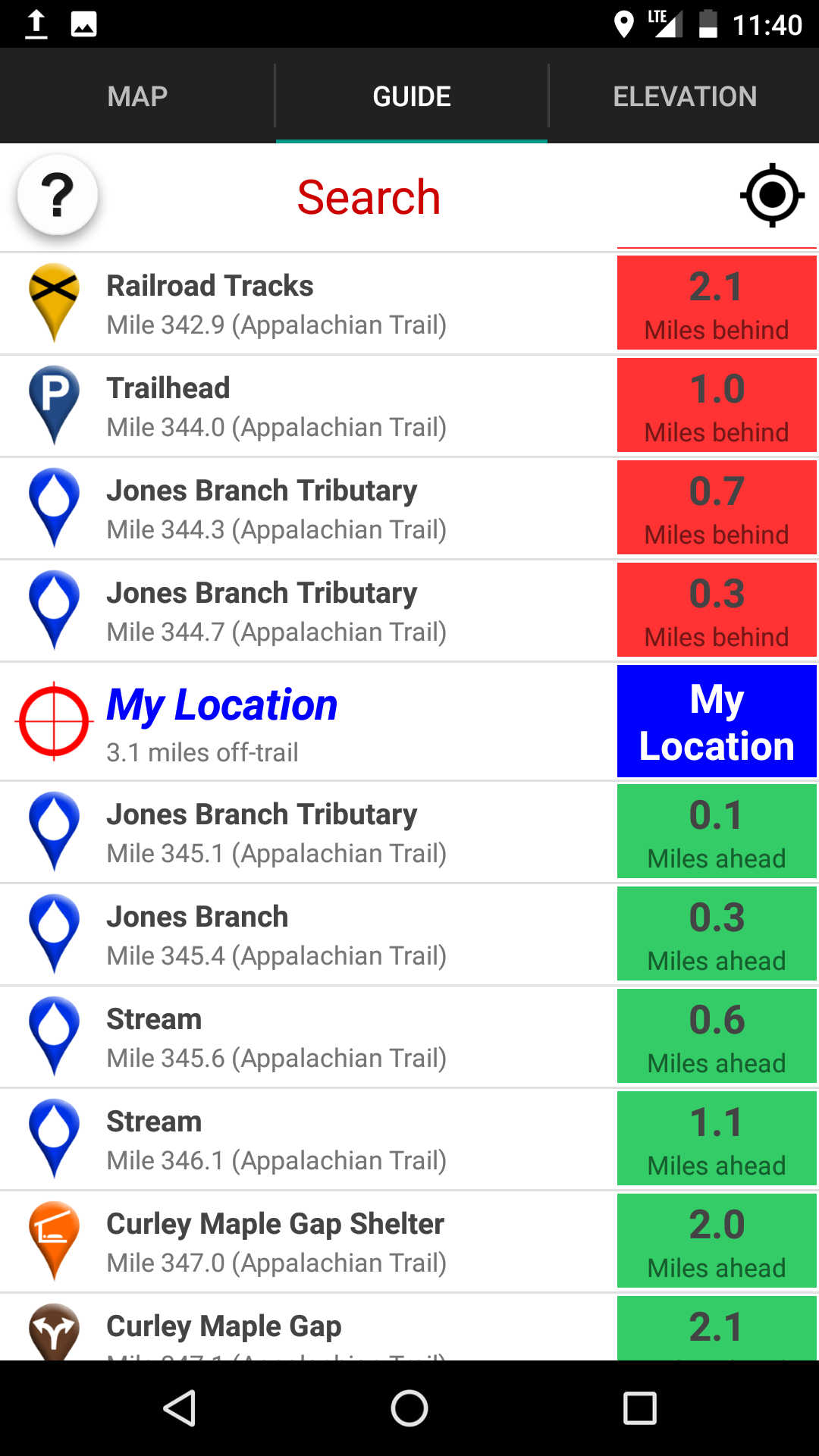 At a glance, I know where I am, where I was, and where I am going.

I use this instead of AWOL’s “The AT Guide” which is an 8oz book most thru hikers carry. I even picked one up the first week of my journey, but have since purchased and downloaded the PDF version. As good as Guthook is on the trail, it is missing a lot information about the towns along the trail, which AWOL’s guide covers very well. Hence, my need for the digital version at the very least.

I should also mention that most hikers rely solely on AWOL’s guide, physical or PDF, instead of Guthook. It does the job rather well, you just have to pay closer attention to landmarks along the way.  Best I can figure, the $60 price point for Guthook is too rich for most folks. It even made me hesitate before buying.

Grey skies are all too familiar by now

When I set out on this hike, there had been a couple weeks of rather pleasant weather in the southeast. By the time I hit the trail, things began to normalize a bit, meaning it got colder, wetter, and even snowier at times.  I went the first week without a dedicated weather app, but quickly learned that knowing the weather ahead of time is nearly as important as knowing how far you have to walk to get to the next shelter.

I now use Weather Timeline for Android. As you can see in the screen shot of my home screen, it dominates the bottom quarter of the real estate on my phone. I have 2 widgets: One that shows the forecast for the next couple days, and one that shows the forecast throughout the day. I have it set to update based on my current location every 3 hours, when my phone isn’t in airplane mode and I happen to have a signal. 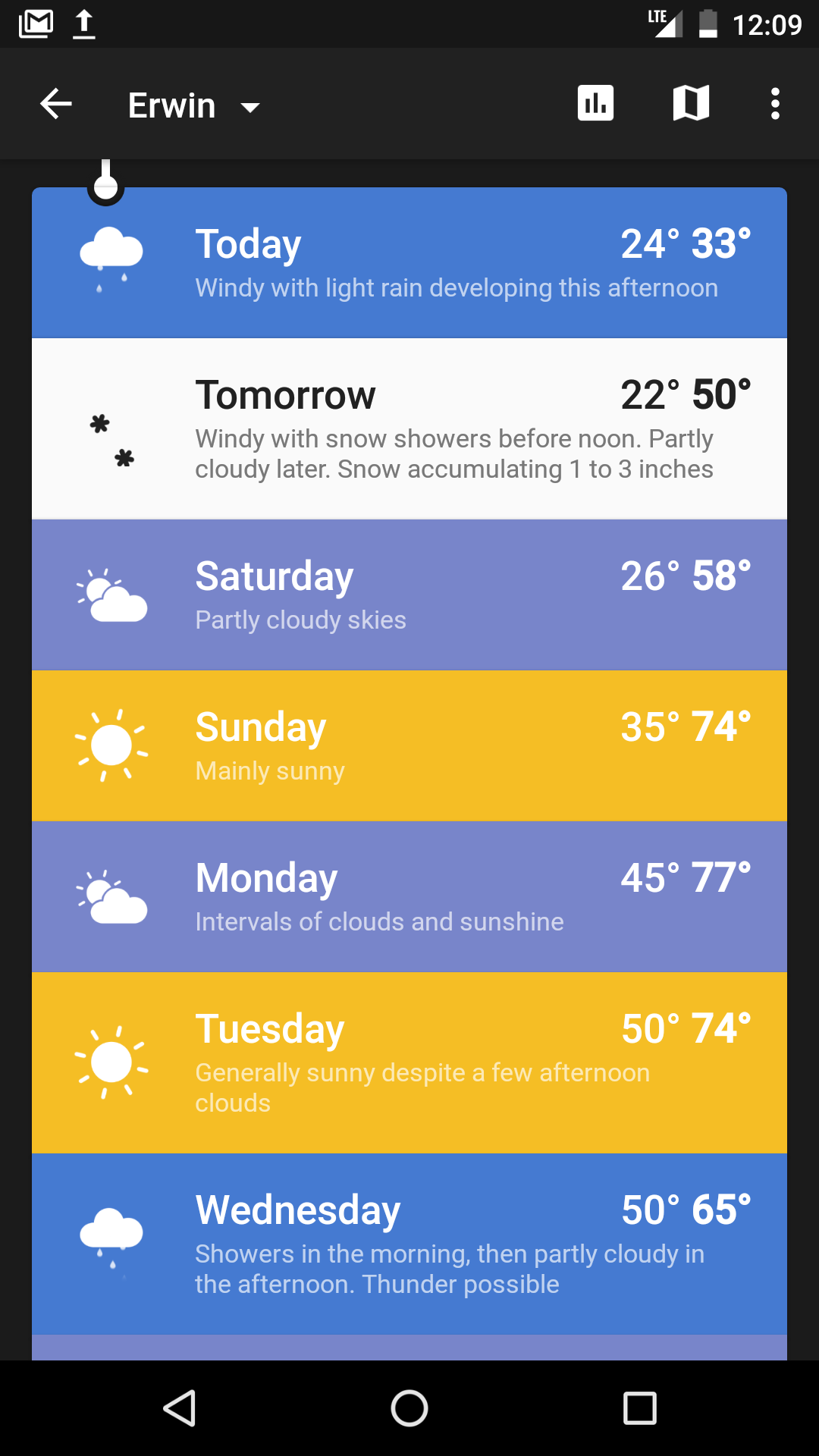 Hey look! The sun is going to come out for 2 days this week!

The app also has separate radar and graphs, but I normally just look at the hour to hour and day to day info. Snow is in the forecast for tonight and tomorrow morning, which is why I’m sitting in a hotel room right now, reluctantly.

A quick photo or video and syncing to the cloud

I started my hike with the intent to use my phone, a Nexus 5X, as my sole device for phtoagraphy. Within a couple weeks I decided I wanted something more. I ended up picking up a Sony RX100 Mark IV thanks to a friend finding one on sale at a Best Buy in New Hamshire (thanks, Dave!).

My Nexus was doing an average job, and is quick to the draw, but the Sony just blows it away as far as image quality and features. I added 8oz to my base weight with the Sony, but it is worth every ounce.

A shot taken with my Sony RX100. My mom said “That photo of the mountains on Instagram looks fake because it is so perfect, Jimmy.”

I still use my mobile phone to capture quick shots, but it is now mostly for uploading my pictures to Google Photos so I can free up space on my camera and phone.

I have editing software for my videos installed as well, one from Adobe and one from GoPro, but have choosen the easier route of just uploading raw videos to  my YouTube channel for now.

Changing out gear while on the trail

As some of you may know by now from previous blog posts, my initial gear didn’t always work out as expected, and I have replaced more than one item along the way.  I have shied away from most local outfitters except for small items, and instead like to order direct from the manufacturer or Amazon since I am a Prime member.

Doing research and making these purchases while on the trail has reduced the time it takes to get these important items and put them to good use. Amazon has been a savior where the manufacturer doesn’t have speedy shipping options. 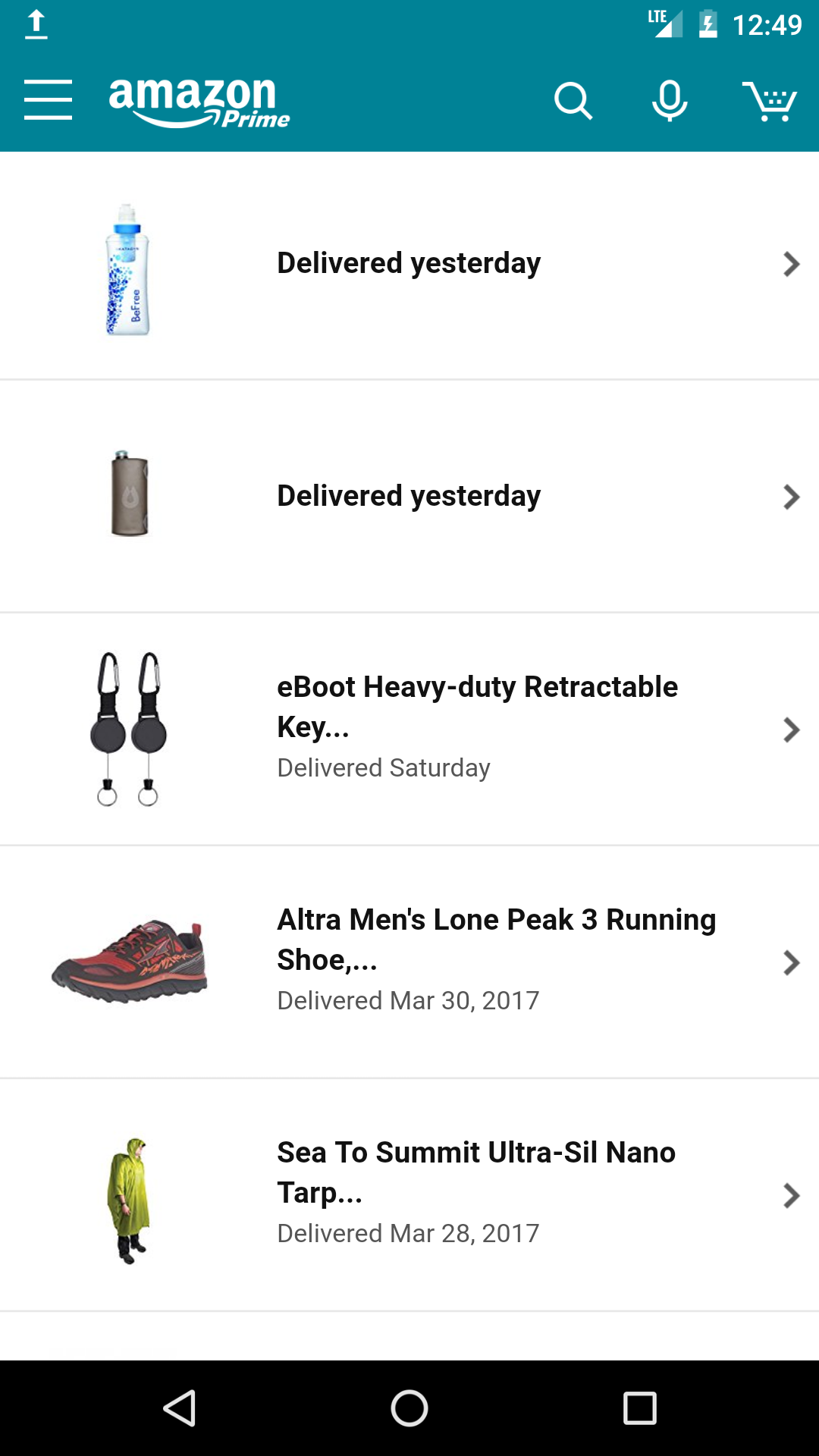 A few recent purchases. Some delivered to my Mom’s house, some to hostels along the trail.

I even found the shoes I love, Altra Lone Peak 3.0s for 25% off while browsing Amazon one day. Instant purchase. My mom is holding onto them until they are needed.

I’ve not only saved money by purchasing online instead of a local outfitter, but have not had to settle for what they have in stock. My tastes often differ from the local selection.

Don’t get me wrong; nature is great, and I spend plenty of time unplugged and enjoying it. But I also enjoy listening to music and podcasts while I walk, and watching TV episodes or reading a book in my tent.

I even purchased Rogue One on Google Play last week and really enjoyed watching that in my tent over several nights before falling asleep.

I started my trek with a dedicated MP3 player, but unfortunately lost the tiny device along the way. I use Google Play for music, but many out here use Spotify.  Either app being in offline mode, of course.

I use Pocket Casts for podcasts like Serial, Shittown, & Crimetown. And of course Audible for audiobooks. The ones I can’t find there are normally found on YouTube, which supports downloading offline as well.

Keeping a diary and missing my dog

I use Dairo to keep daily notes on my journey. It is a pretty cool app for that purpose, although I wish it had stronger sync, sharing, and export features. 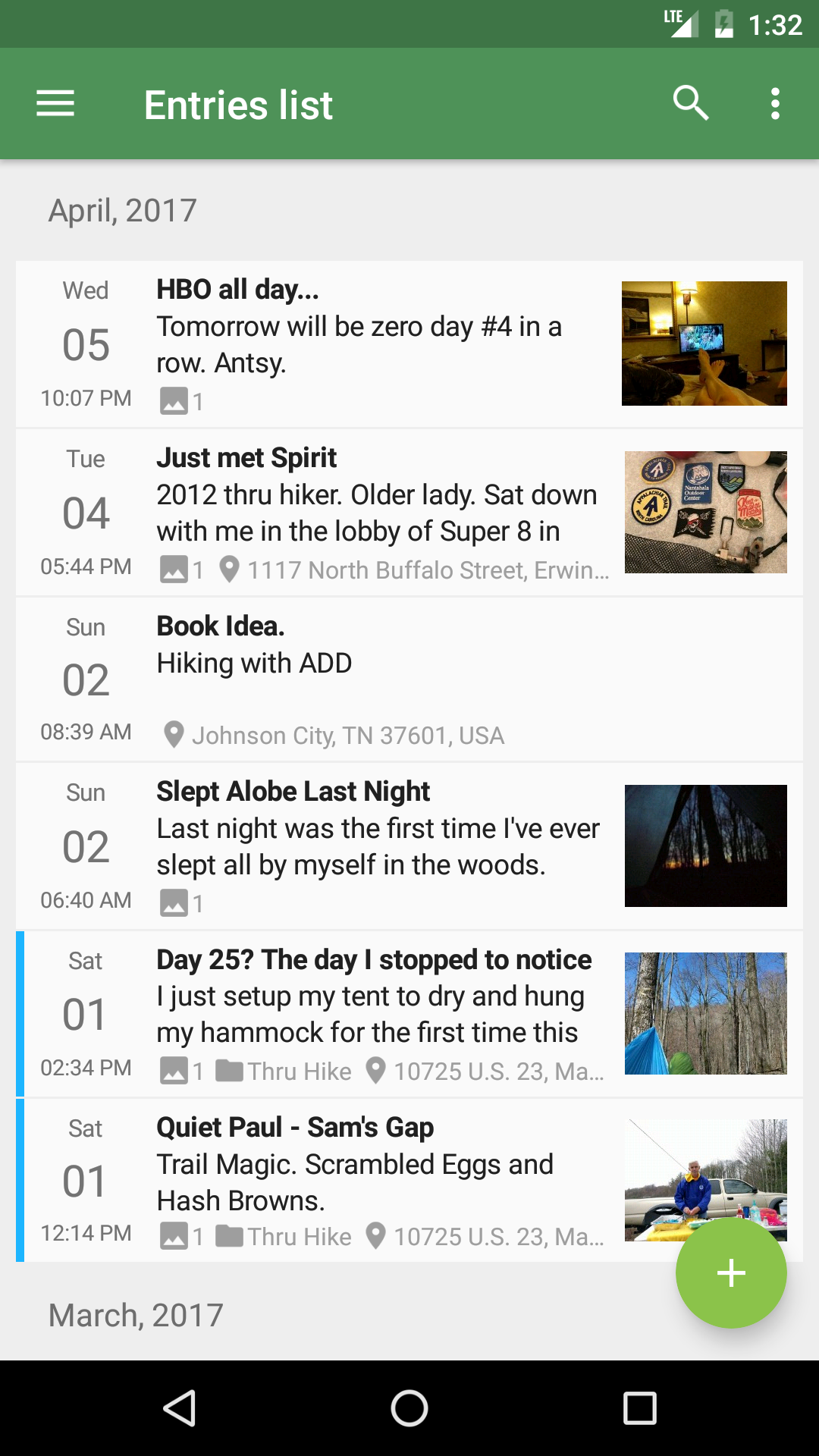 Some recent entries in the Dairo App on my phone. How does one pronounce “dairo”, anyways?

And I miss my dog, Willy, every minute of every day. I wish he was on this hike with me, but I know leaving him at home was the right call for many reasons. I like to look at his picture, which is my home screen. It doesn’t help subside my missing him, but reenforces the love I have for him. Seeing his picture helps keep me motivated to reach the end of the trail sooner than later. 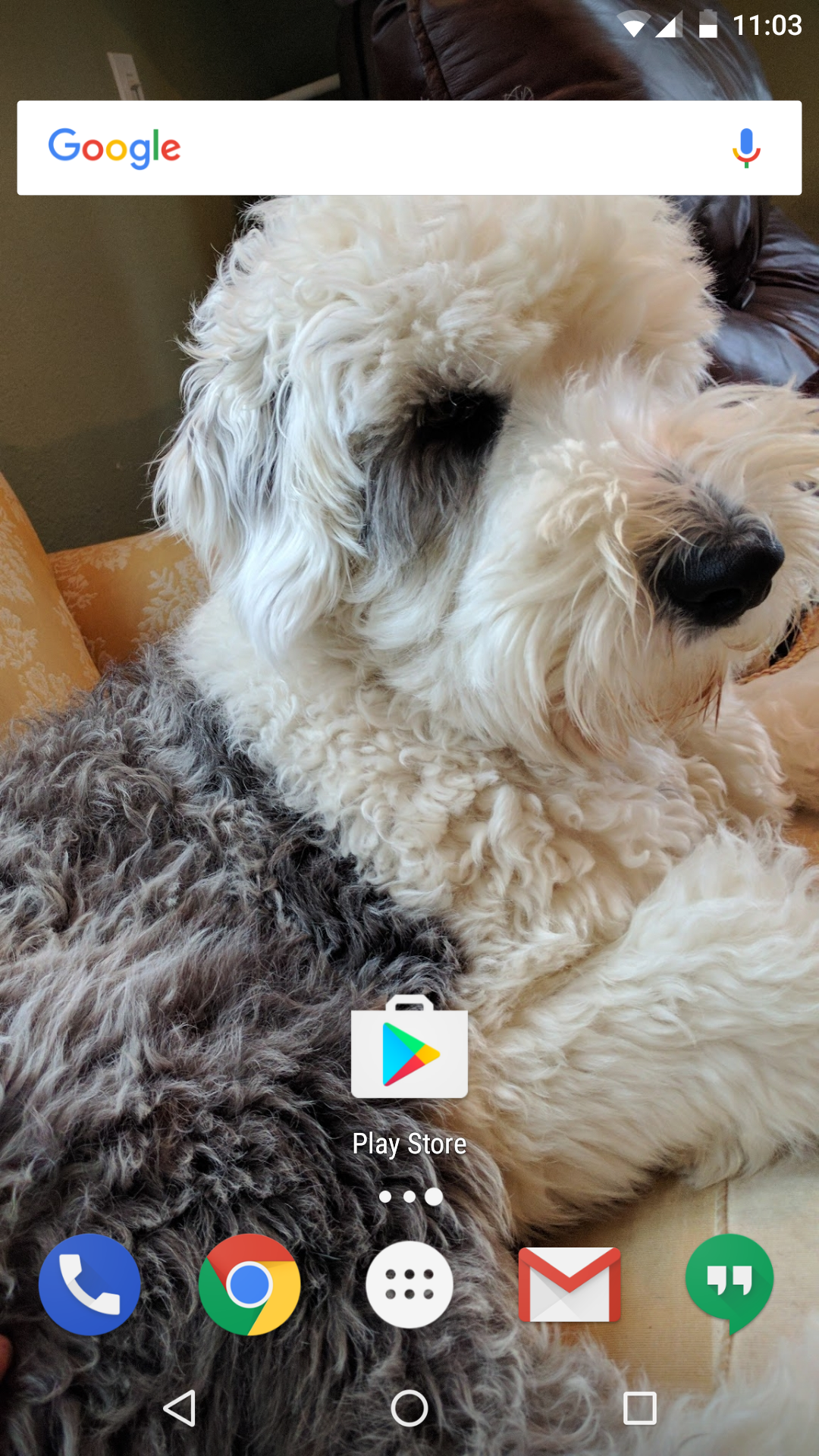 Willy, Will Bill, Ole’ Bill, Billy, Willy Boy, William Wallace, Bub – he answers to them all.

I’ll see you soon buddy. I just wish I could tell you as much.

The obvious reason to have a mobile phone

Calling home. Unlike most of the other things i have discussed here, you actually need a signal to complete this task. I started this walk with Google’s Project Fi, which runs off of Tmobile, Sprint, and US Cellular.

I soon learned that Verizon is king of these here mountains and decided to switch service providers while passing through Gatlinburg. I’ve had a more consistent and stronger mobile signal since, but it is still spotty. I do spend most of the time in airplane mode anyways, even if there is a signal.

Keeping up with trail friends via text and social network is nice, too. We are all going at our own speed out here and most that I have come across don’t bother with the journals at the shelters (just another way illness can spread) so texting and messaging on Facebook becomes more practicle.

Instagram is pretty sweet, too. You can follow me here if you like.  I try to do one photo or video per day with a brief text update.

The most useful piece of gear in my bag

I think I’ve made a pretty strong case for my phone being the most useful device I carry on the Appalachian Trail. I kinda wish it wasn’t the case, that I had completed this thru hike prior to the digital age, but that isn’t today’s reality.  I would be ignoring the most powerful piece of hiking gear available to me if I didn’t bring my mobile phone.

I just wish the battery lasted longer. I don’t enjoy carrying all the cords and power banks nessasary to feed the machine’s insatiable hunger.

Greetings fellow hikers! In brief, my name is Jim, I'm 39, and I am originally from Manassas, Virginia. I moved to San Francisco in my early 30s and now live in Truckee, California, which is just north of Lake Tahoe. I consider myself experienced at hiking and camping, but not an expert. I'll be attempting my thru hike with an ultralight setup, and in that category, I am a beginner. Join me as I figure out the nuances of thru hiking with as little as possible along this 2190.3 mile walk.