The Thru-Hiker’s Guide to Safe and Effective Hitchhiking

Hitchhiking is the easiest, most efficient way for thru-hikers to travel between town and the trail. After all, we don’t have cars and we often don’t have cell service to pre-arrange shuttles.

Besides, this is thru-hiking we’re talking about. Unexpected junk happens all the time, and at some point, you may find yourself at a road crossing and in need of a ride with little to no advance notice.

Hitching a ride is a great way to get around the trail corridor and meet new people. However, it can also be a little intimidating if you’ve never done it before. Following the below pointers will help you get rides quickly, easily, and safely. 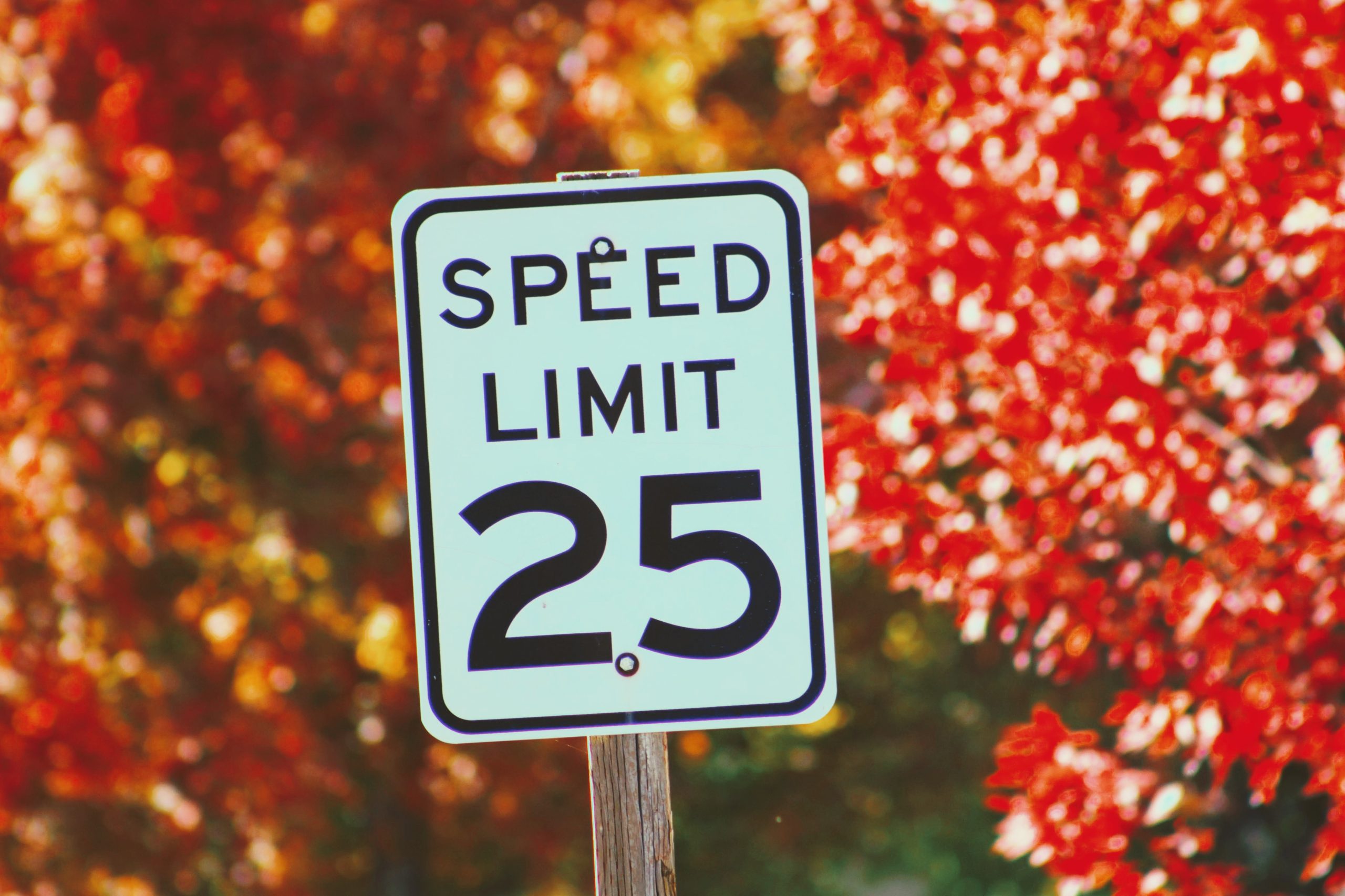 Photo by Joshua Hoehne on Unsplash.

No one’s going to pull over for you if they’re flying by at 60 miles per hour. Besides, hitching on a road that fast is dangerous. Target roads with speed limits less than 45 mph when possible. The slower the better. If you’re in town, position yourself near a stop sign or traffic light, where cars will have to slow down anyway and get a good look at you.

Similarly, you’ll have much better luck getting a ride if there’s a decent amount of traffic on the road. Most of the time, many cars will pass you by before one deigns to stop for you. If there are only a handful of cars going by, it’s likely going to take a long time before one decides to stop for you.

Stand someplace with good visibility and room to pull over. 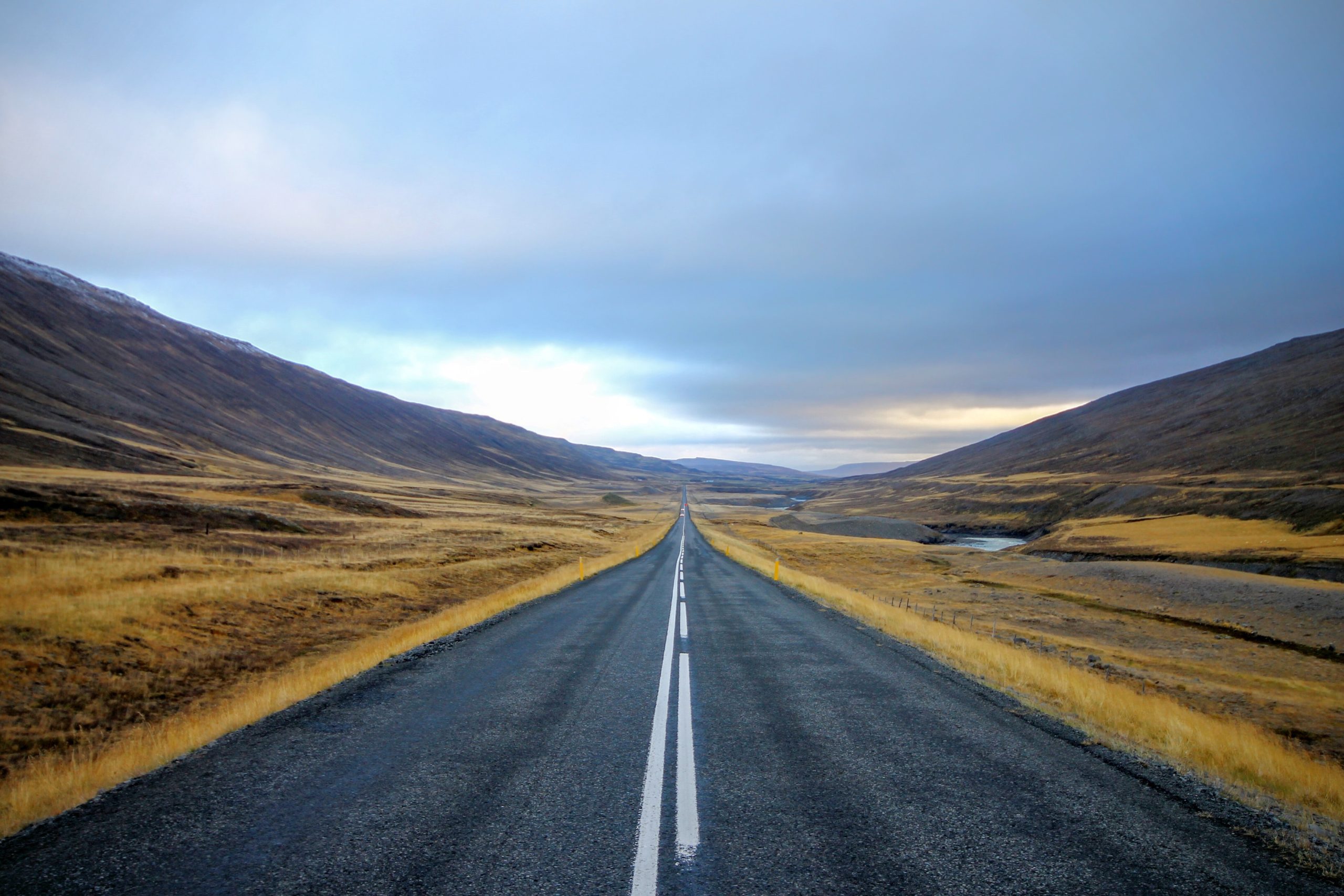 Photo by Matteo Paganelli on Unsplash.

Not only is it dangerous to stand on the side of a road with little or no shoulder, but it’s also highly unlikely anyone’s going to pull over for you, because if they can’t get their car all the way off the road it’s dangerous for them to stop, too.

Strategically place yourself someplace with a wide shoulder, a pullout, or a driveway so drivers have a chance to pull over for you.

Also, look for straightaways. If you’re on a curvy road with little visibility (again, this is kinda dangerous), drivers aren’t going to see you in time to stop for you. If they can see you hitching well before they get to you, they’ll have plenty of time to decide whether or not they want to stop.

Ask around in the parking lot first. 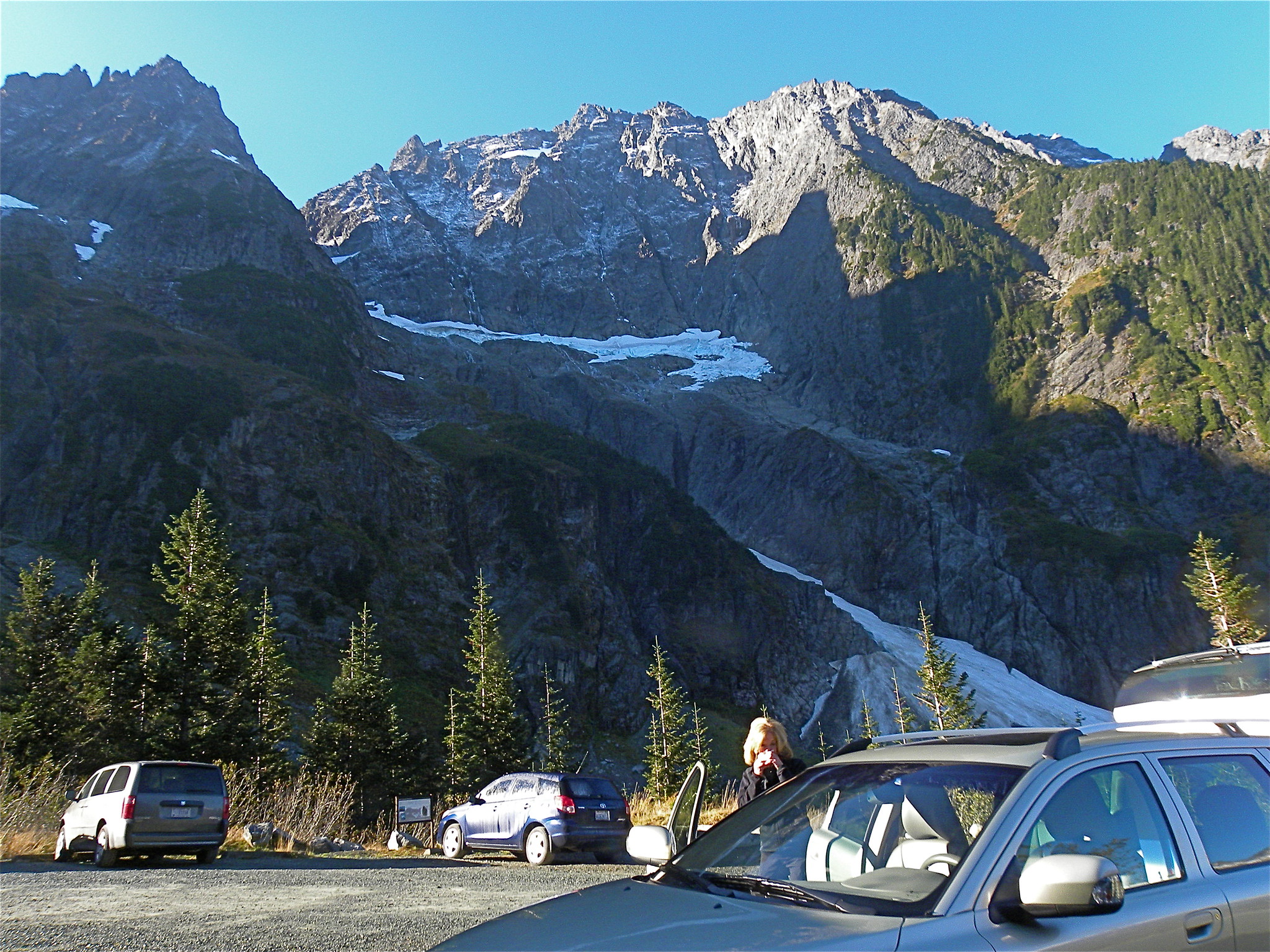 If you’re at a busy trailhead or in the parking lot of a grocery store, restaurant, or gas station, you can always ask people there if they have room in their car for you. It’s a lot easier to engage people who are outside their cars and standing still than people zooming by at 40 miles per hour, after all. Just don’t be weird about it.

Don’t be afraid to say no. 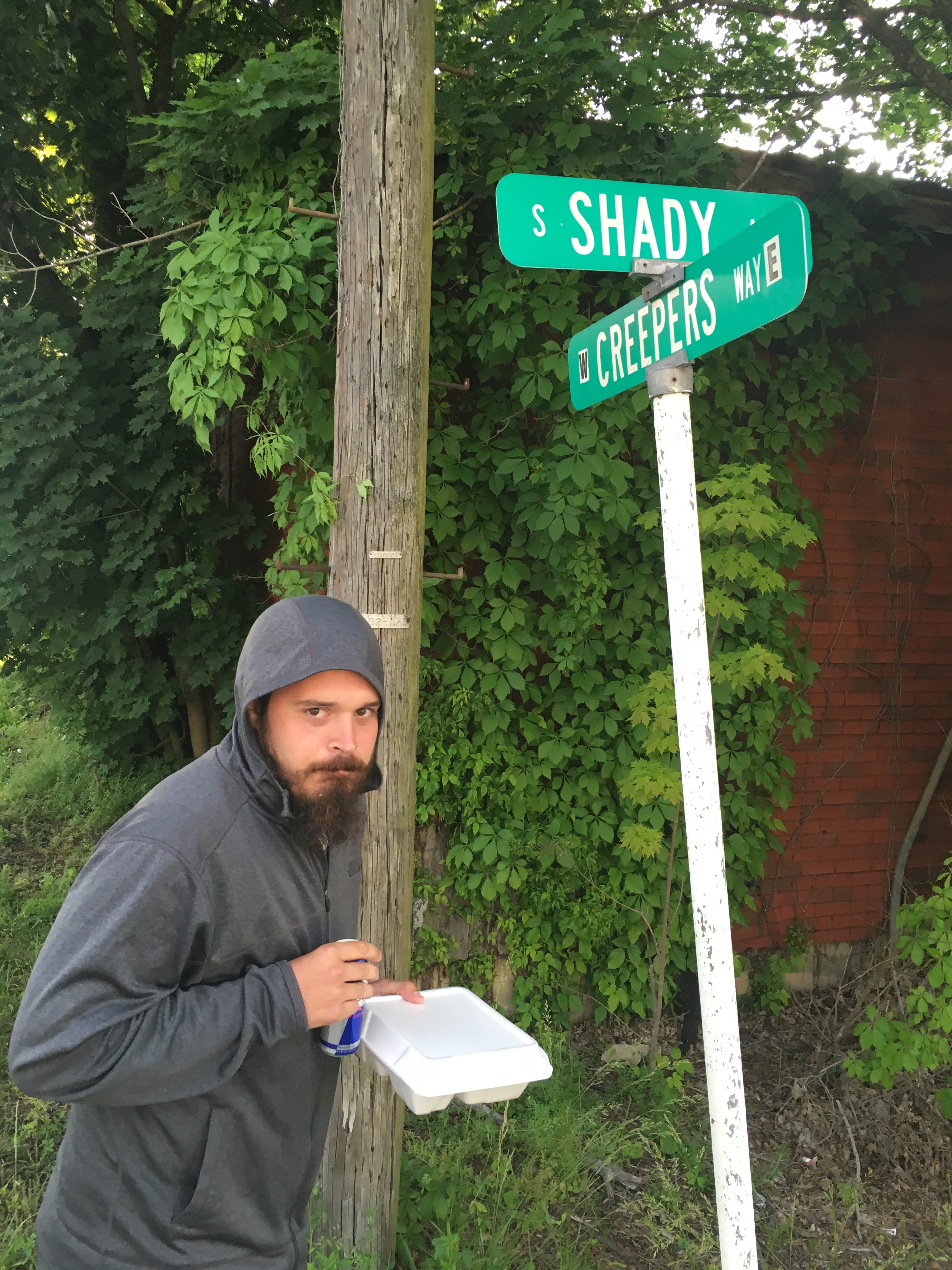 You don’t have to accept a ride from a shady creeper. Photo via.

Hitchhiking can be a fun, whimsical adventure, but also, you’re putting a lot of faith in a random stranger when you get in their car. This is especially true for solo women, but all hikers should approach potential rides with caution. After all, a drunk driver can still kill you even if you are a large, hairy man.

If someone offers you a ride and you feel uncomfortable about it for any reason, it’s OK to turn them down. Don’t be afraid of hurting someone’s feelings. Typically a simple “no, thanks,” will suffice. But if you’re worried about how they’ll react, it’s a good idea to have a ready-made excuse.

“Thanks, but I just decided I should wait for my friends to catch up so we can all go in together,” is my go-to, though I’ve never actually had to use it. “I just realized I left something important back in the woods, better go back and get it,” is another popular one. Be polite but firm.

You should also carry your phone, wallet, and any sort of weapon (like pepper spray) on your person even if your pack is in the trunk when you’re riding in someone’s car. 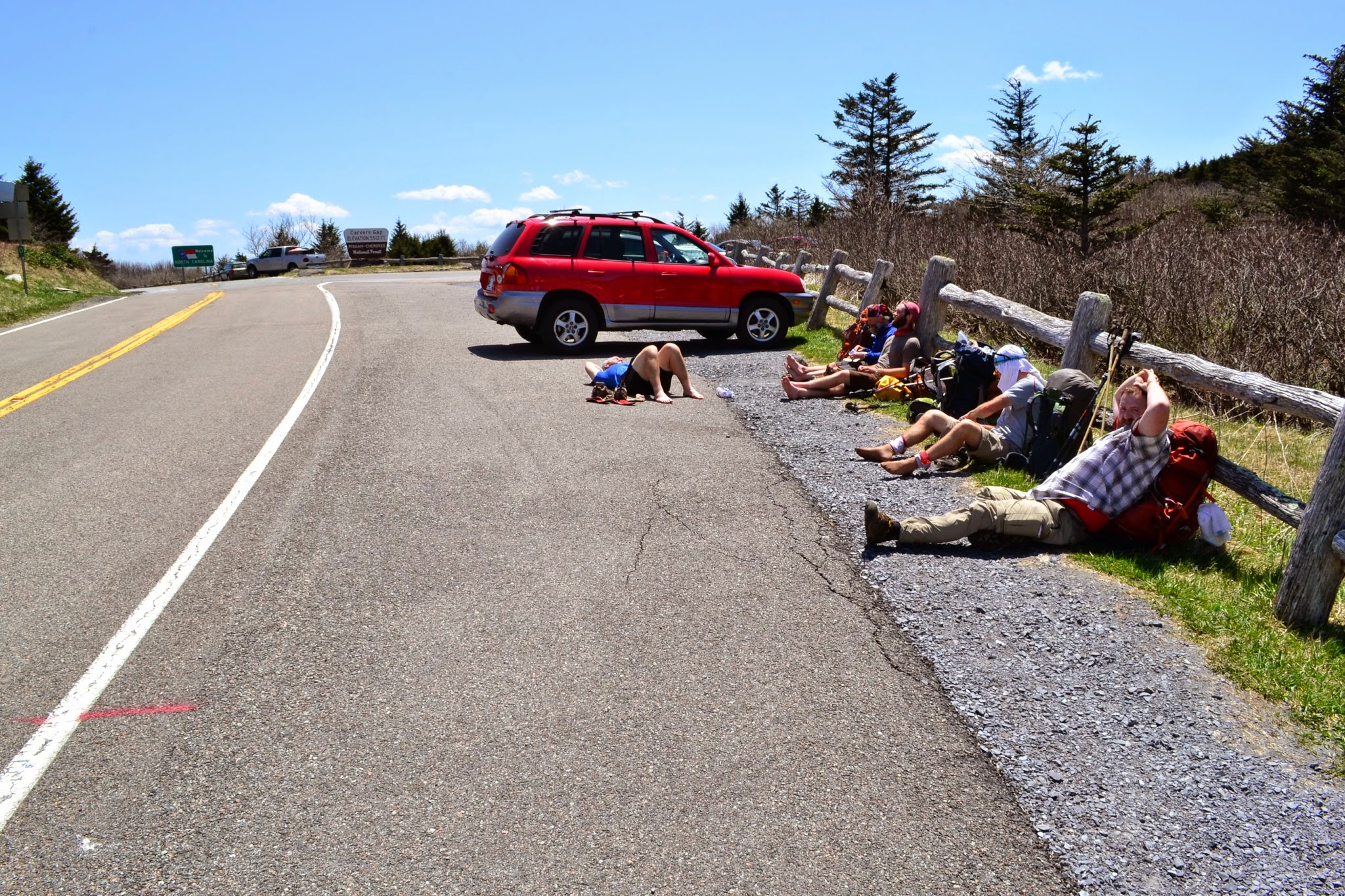 If you succeed in flagging down a car and can convince them to take one or two more people, great. But no one’s going to stop to pick up four or five hikers at the same time, so you’re doing everyone a favor by spreading out.

Alternative solution: I’ve occasionally seen groups of hikers take it in turn to hitch. One party stands out by the road and thumbs it, while all the other hikers wait further back on the trail. When the first group gets picked up, the next one takes their place, and so on. 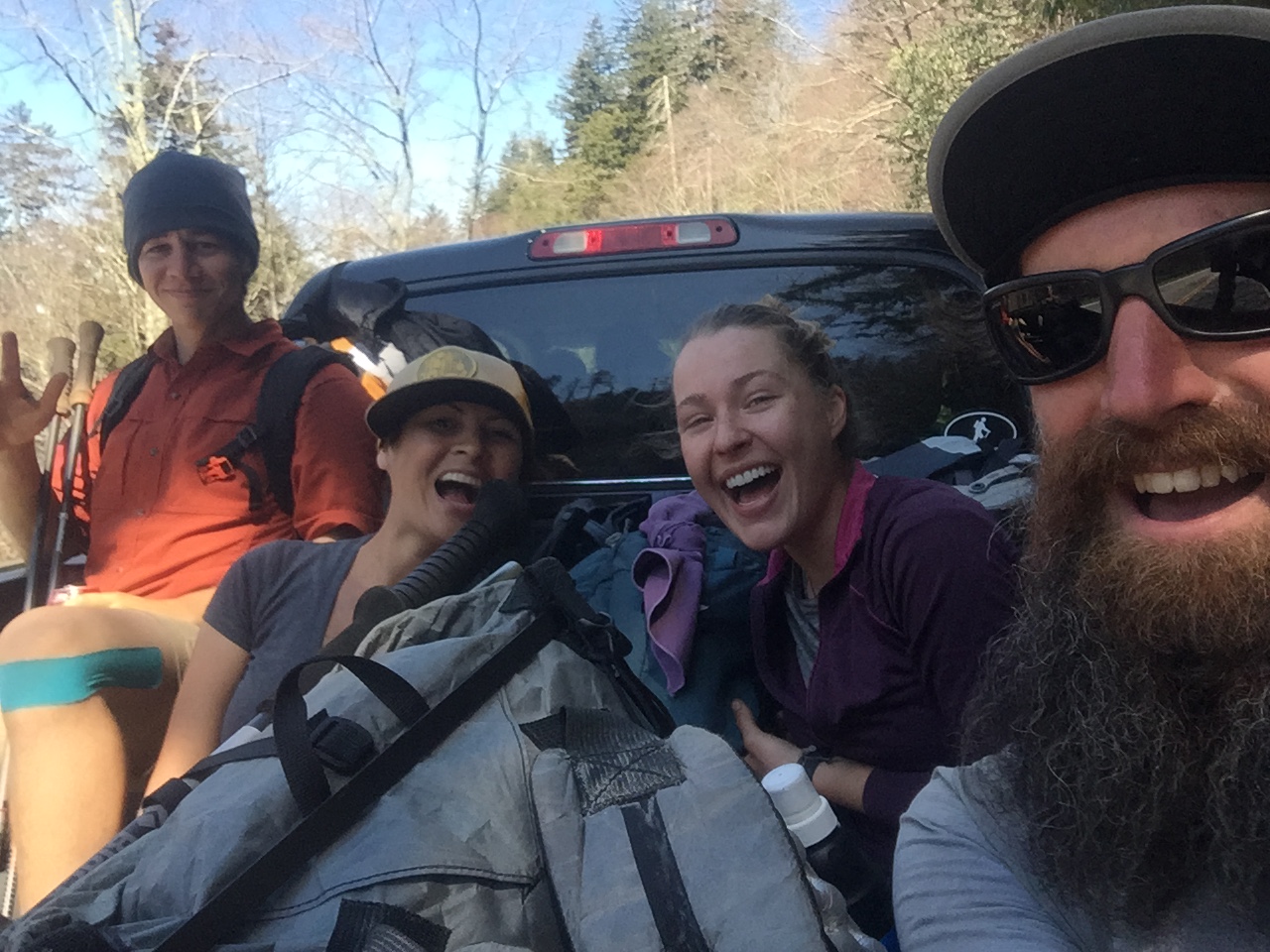 Guys, throwing your lot in with female hitchhikers will drastically improve your odds. Photo via.

Just as hikers worry about their safety getting in a stranger’s car, drivers worry about picking up strangers. Most people feel more comfortable with women and are more likely to pick them up. If you’re hitching in a group of two or three, any women in the group should be out front in the most visible position for this reason.

Regardless of gender, be as visible as possible. Don’t wear sunglasses or your mask while you’re hitching. Let people see your full face. Also, make sure your pack is visible as well—many people like picking up hikers specifically and want to hear about the journey. Keeping your pack nearby signifies that you’re a hiker and increases your odds of snagging a ride. 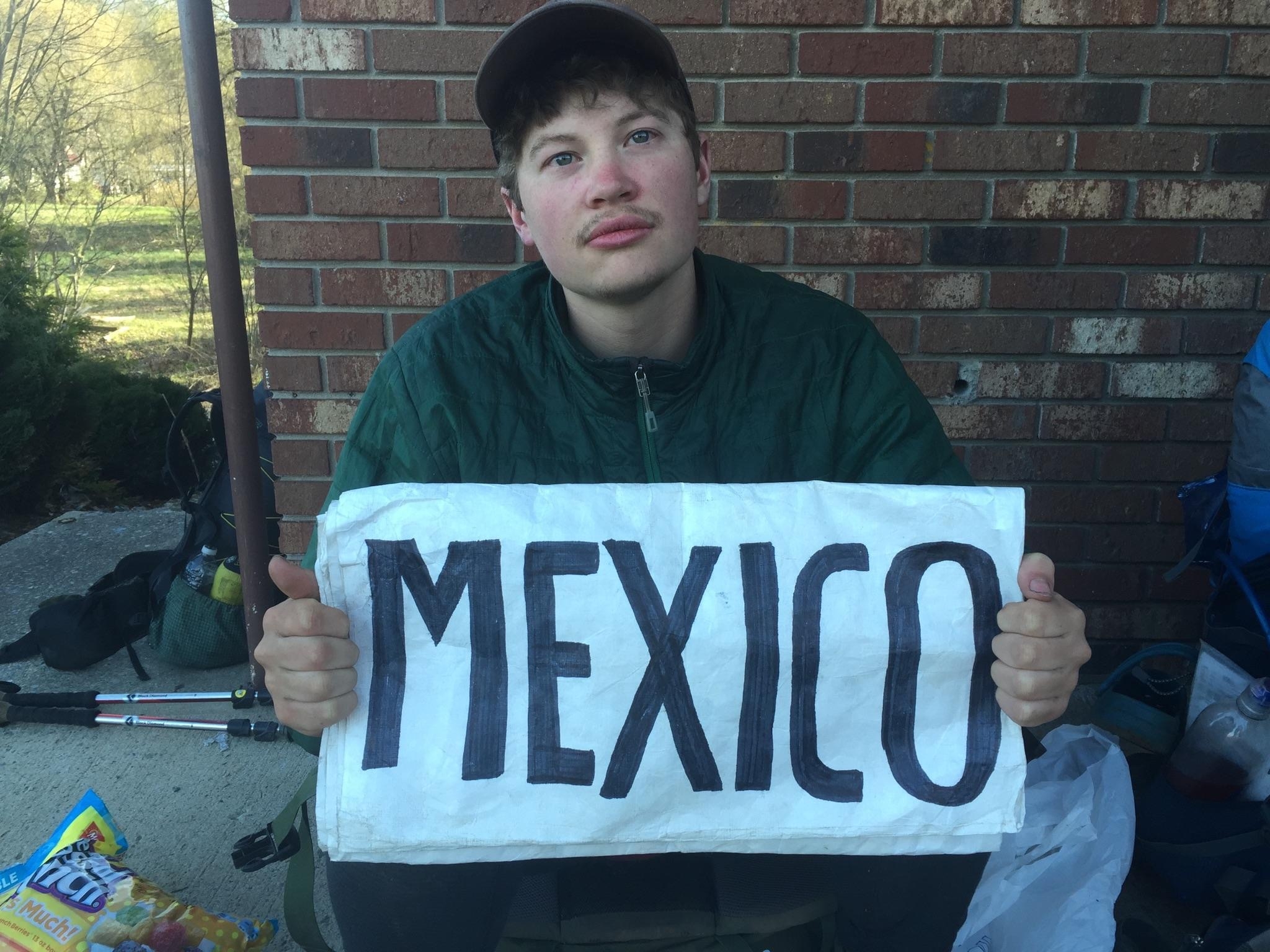 This usually isn’t necessary if you’re just going a few miles from trail to town. Locals are used to seeing thru-hikers. They understand that they’re just trying to get to the supermarket and the nearest all-you-can-eat buffet.

But if you’re trying to travel further (for instance, trying to get to an airport or bus station in the nearest city, etc.) it’s helpful to have a sign pointing to your destination. That way drivers know right away whether they’re headed in the direction you’re trying to go. That extra bit of data can help sway someone to stop.

This also comes into play in touristy areas, because out-of-towners are generally less likely to pick up hikers. They may not even know what thru-hikers are, and moreover, they’re probably not too familiar with the local area. But if you have a sign saying where you’re going, even some tourists may be able to help you out. 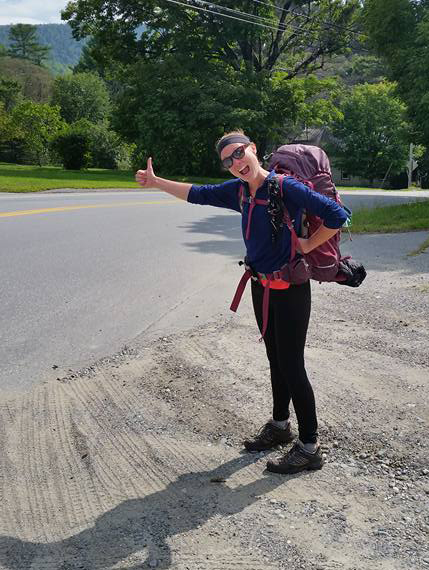 Sometimes you’ll get lucky and the first car to pass by will stop for you. Sometimes you’ll be stuck on the pavement for hours with your thumb out and a forced grin plastered to your face as indifferent vehicles whiz by. This sucks, but if you stick with it long enough, someone will eventually stop.

Hitch every vehicle that goes by. OK, maybe not motorcycles, but you know what I mean. No four-wheeled vehicle is off the table. You’ll never know if you don’t try, and the worst thing they can do is keep on driving.

Remember that you’re not entitled to a free ride. There’s no point getting hurt feelings every time someone chooses not to pick you up. Just hang in there and stay positive.

Be courteous to your driver. 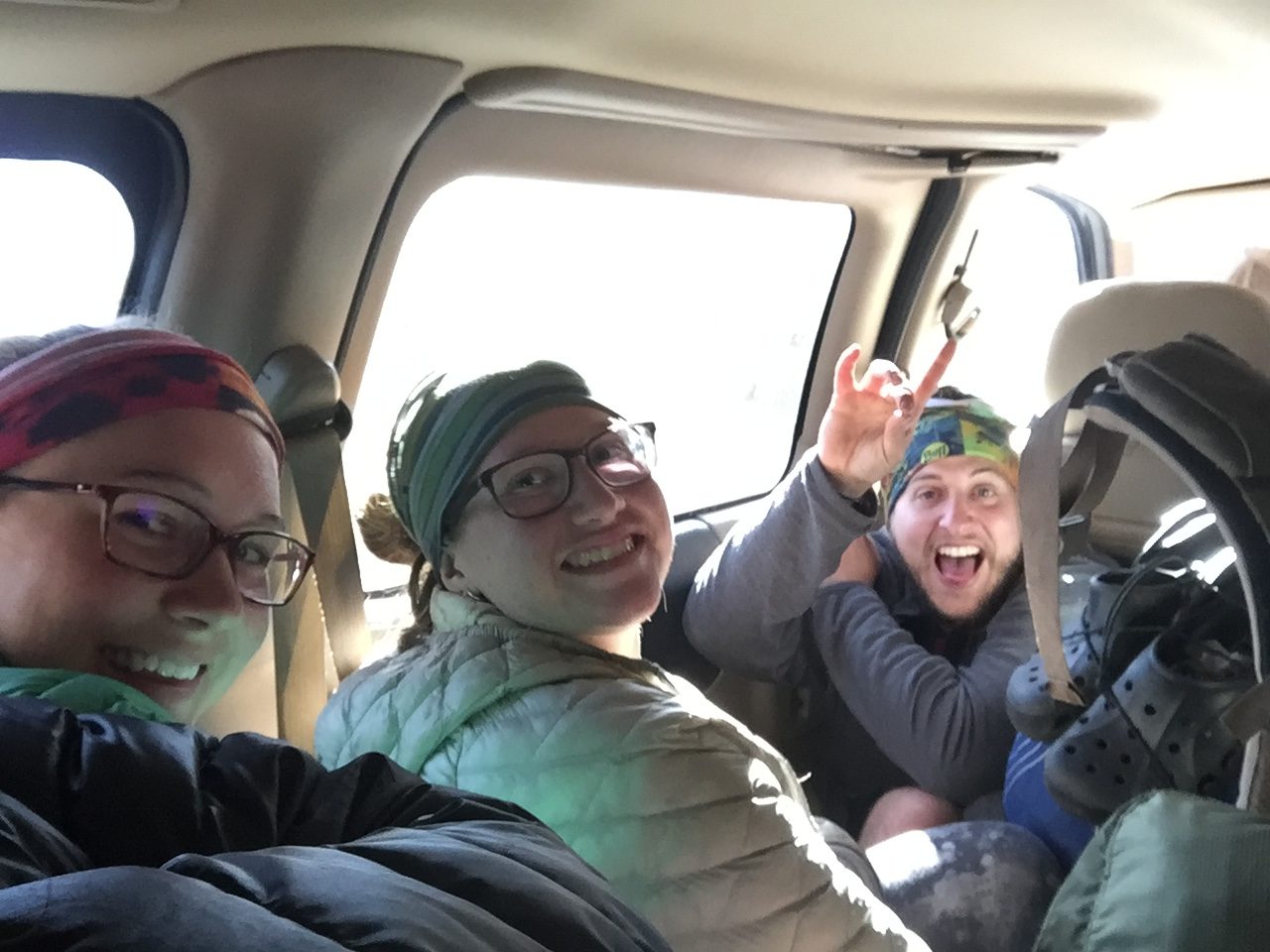 Again: drivers aren’t obligated to give you a ride anywhere. The generosity of the folks who go out of their way to help hitchhikers is a large part of what makes the activity so magical. Make sure to repay their kindness by being as courteous as possible.

Offer to ride with windows open so they don’t have to smell your hiker funk. If it’s been raining, shake the mud off your shoes before you get in the car and offer to sit on a tarp or towel to protect their upholstery. Offer to chip in for gas money, especially if it’s a long ride. Have your mask out and be ready to wear it if they ask.

And, of course, say thank you.

Make sure you know which way town is. 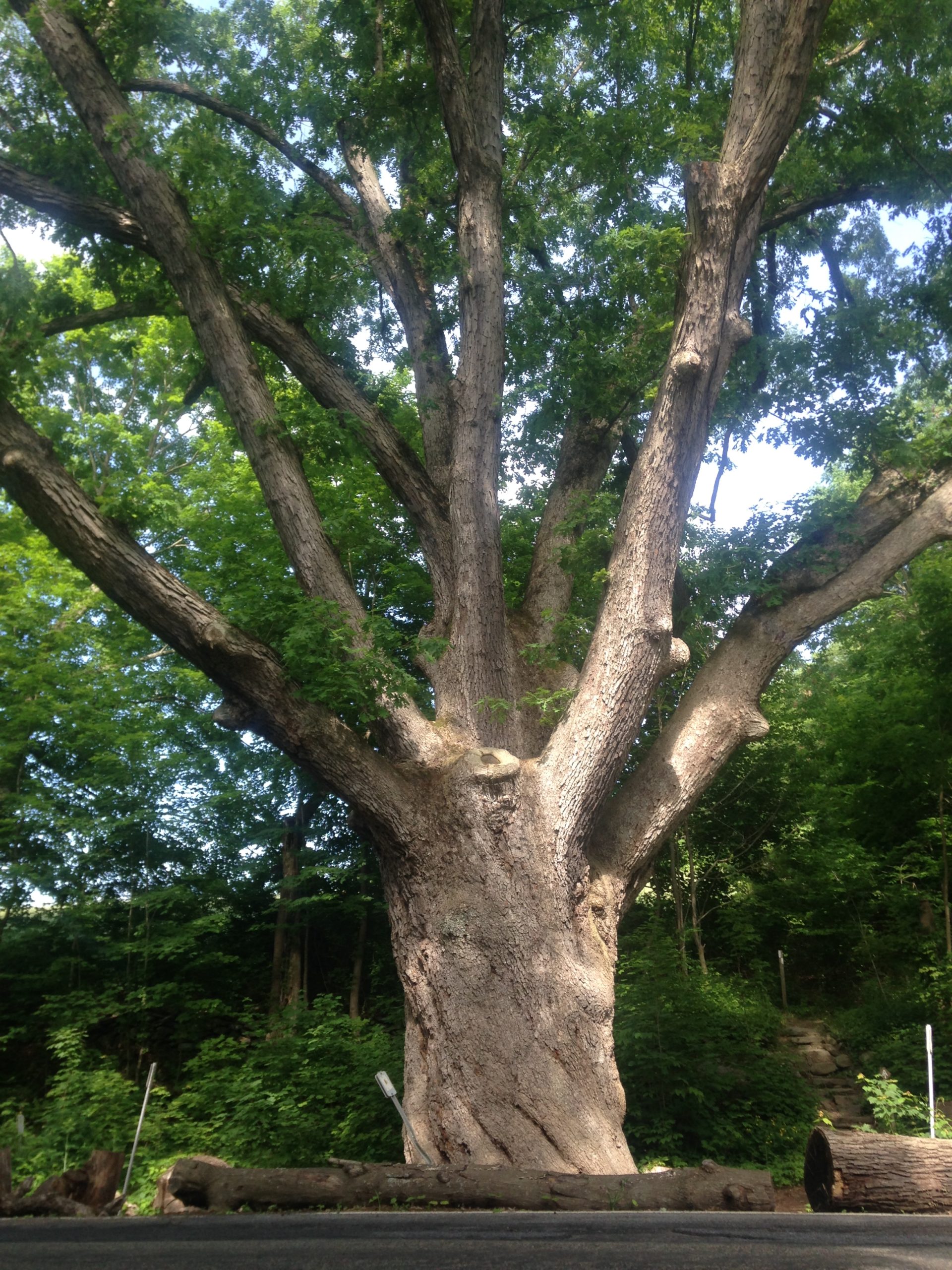 I took a wrong turn at the Dover Oak on the Appalachian Trail and ended up in the wrong town.

Once, in New York, I jumped in a car heading for town without questioning which town it was going to. Turns out they’re not all created equal. I ended up in not-the-right-place, managed to convince the driver to drop us off at the train station, bought a train ticket, the train got cancelled, and then a random taxi pulled into the virtually abandoned train station parking lot for no reason whatsoever and gave us a ride to the correct town. The whole situation was an utter farce from start to finish.

Moral of the story: when you reach a road crossing, don’t assume you know which way town is. Wandering around in the forest for days on end can be disorienting, after all. Check your map or guidebook and figure out which side of the road to stand on.

Hitchhiking is a major source of anxiety for first-time thru-hikers. Once you’re out there, though, the lure of delicious town food and a hot shower will probably help you overcome any last-minute jitters. It’s a convenient way to get to and from town and an excellent opportunity to meet new people.

And next time you see a thru-hiker hitchhiking in your off-trail life, earn yourself some good trail karma and give them a lift.