The Triple-Crown Everyone Should Be Talking About: Thru-hiking In A Warming Climate

On August 9, the UN’s Intergovernmental Panel on Climate Change (IPCC) released its latest report describing the causes and effects of human induced global warming.  This is the sixth iteration of the report and the effort to produce it was gargantuan, much larger than that of even the longest thru-hike.  It took scientists eight years to compile and combines the work of over 14,000 studies. 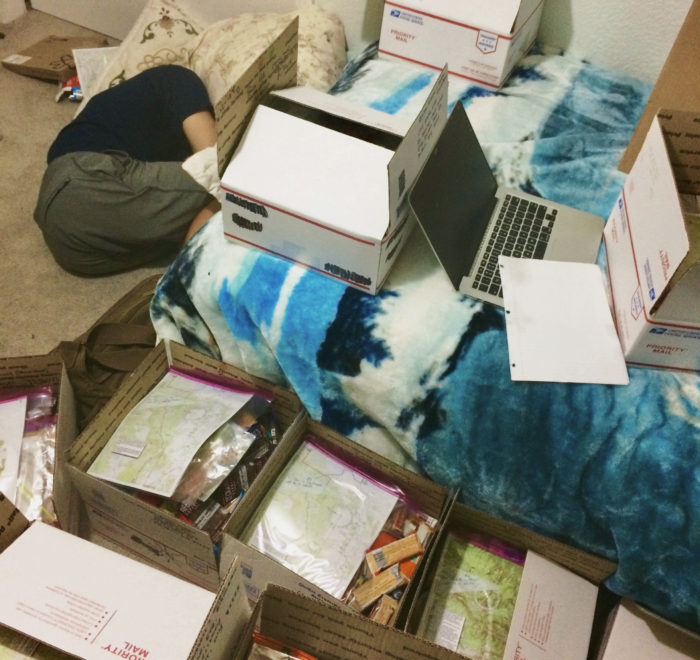 The IPCC’s report took much more effort to produce than my CDT resupply boxes. Photo: SpiceRack

The result is robust and comprehensive.  And what was the conclusion?  Reading between the lines of the tragically reserved language written by people who have never once exaggerated, I gathered that humanity is (almost) totally screwed.  We still have a shot at doing the right thing, but it’s going to take unprecedented levels of collaboration and selflessness, the likes of which the human race has never before been able to muster. 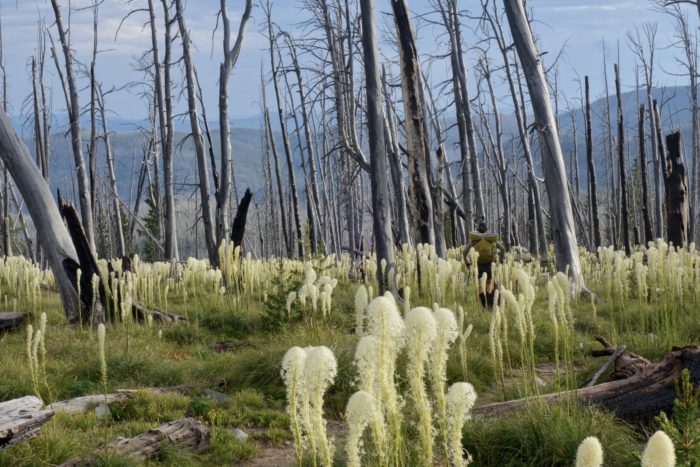 Severe weather and wildfires will increasingly change the landscape, like the fire that burned this forest, leaving a flowering meadow in its wake.

The bombshell packed in the over 4,000-page report isn’t any different from what scientists have been warning of for decades.  We have known that humanity is burning its way to a cliff of severe weather, wildfires, rising sea levels, mass extinction, drought, and famine to name a few.  Nope, the mechanisms of our destruction haven’t changed.  What the sixth report has recalibrated is the timeframe and severity of the aforementioned destruction.  That cliff is both closer and steeper than previously thought.

Read Next: How to Stay Safe While Hiking During Wildfire Season

How bad is it? 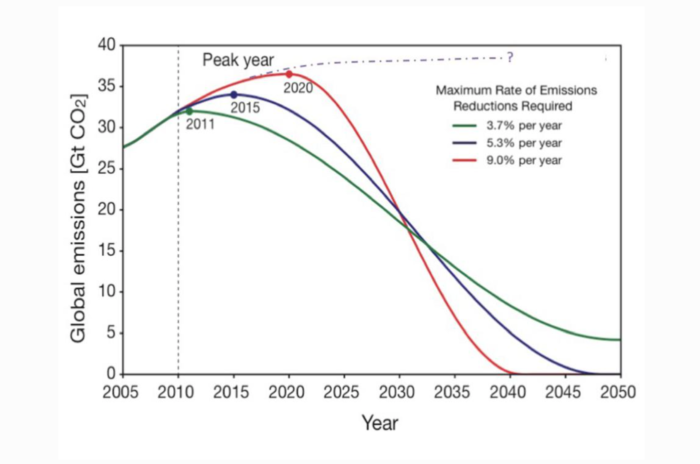 Our global carbon emissions continue to rise. If humanity hopes to keep global warming below 1.5°C, we will need to reduce emissions by over 9% every year, starting now. If we had started reducing them in 2011, a reduction of only 3.7% per year would have achieved this goal. The longer we wait, the worse it gets. Source: UN IPCC

I encourage you to read the short summary for yourself, and then dig deeper.  The Summary for Policymakers is a sobering read.  In short, global temperatures will continue to rise for decades even if human-produced carbon emissions are drastically reduced today.  It is likely that we will exceed the 1.5°C global increase targeted by the Paris Agreement, and staying below even the 2°C tipping point is unlikely given our current course of inaction.  Furthermore, “many changes due to past and future greenhouse gas emissions are irreversible for centuries to millennia…”  Summing up how increasing global temperatures impact climate,

“Many changes in the climate system become larger in direct relation to increasing global warming.  They include increases in the frequency and intensity of hot extremes, marine heatwaves, and heavy precipitation, agricultural and ecological droughts in some regions, and proportion of intense tropical cyclones…” 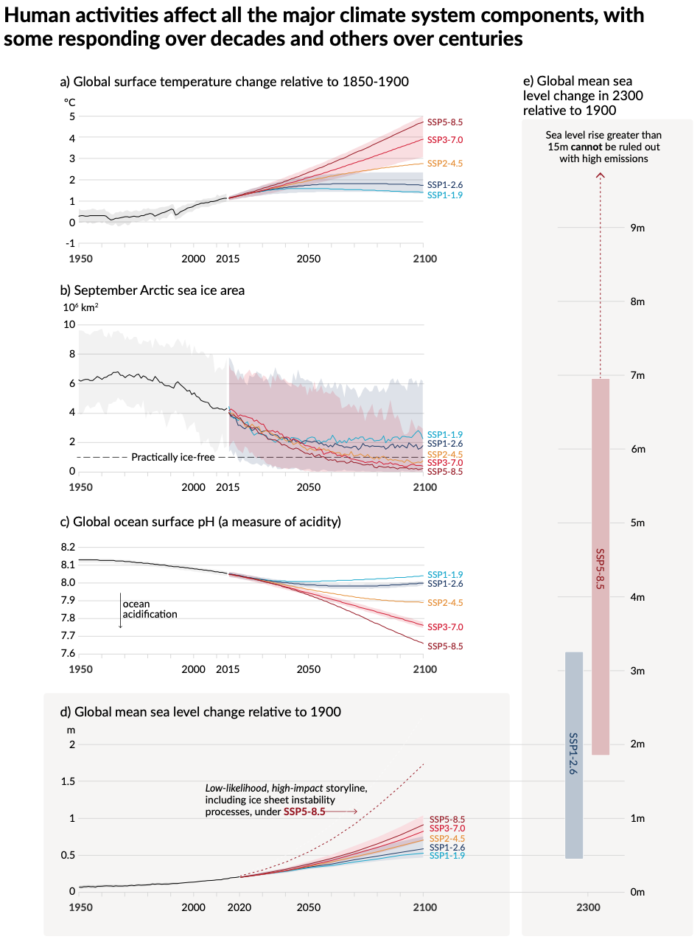 Sea level rise is an effect of global warming that is easy for me to visualize. This page out of the IPCC report takes it a step further. Source: UN IPCC

Pretty much, the warmer it gets, the less livable our planet becomes.  An effect of global warming that I find easy to visualize is sea level rise.  The report explains with high confidence that “sea level will rise by 2 to 3 meters if warming is limited to 1.5°C, 2 to 6 meters if limited to 2°C, and 19 to 22 meters with 5°C of warming…”  Even at the low end, 2-3 meters (6.5-9.8 feet) is a huge increase.

Hiking In A Warming Climate

We are already living in a world altered by climate change.  It’s obvious.  Increasingly these impacts are apparent on our beloved trails.  This year, the AT is experiencing flooding caused by juiced-up tropical storms.  Historic wildfires in the West fueled by massive, persistent drought have burned large sections of the PCT and covered much more in hazardous smoke.  And that’s just this year.  Over the past decade, storms have gotten more intense, and fires have grown in size and intensity. 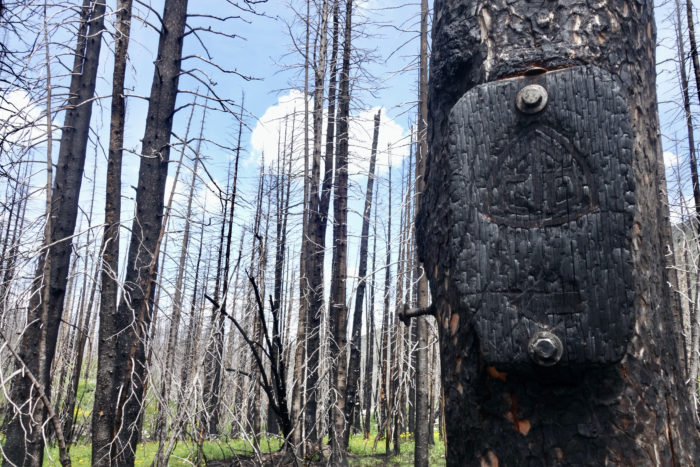 A charred trail crest on the CDT. Wildfire impacts on western trails have increased in recent years, in part due to climate change.

In an interview with SFGate, PCTA director of communications and marketing, Scott Wilkinson speculates that “it’s gotten to the point where it’s almost impossible to thru-hike every point of the trail.”  Direct threat from fire is of course something to consider on a thru-hike of the PCT, but so is smoke from distant fires and increasing distances between water sources.  Speculating further, if sea levels rise 10 feet (granted, this is by the year 2300), how much of the Florida Trail is going to be underwater?

Hey, thru-hikers, can you imagine a world where hiking the PCT, AT, or CDT in a single year is impossible?  That’s crazy.

Read Next: Wildfires, Reroutes, and Records: The Future of PCT FKTs

There is the myth that a frog in a pot of tepid water will remain there even as the water is brought to boil.  Hearing that as a kid, it struck me sad, but funny.  How could the frog be so oblivious and passive?  Well, not only is that untrue, but now I think to myself that so far, humanity is no better than the frog in that fictional scenario.  For all of our intelligence, ingenuity, and yummy foods, we are still metaphorically floating in the pot of water, (willingly) oblivious to our precarious position inside a warming globe.  However, maybe I’m giving us too much credit by comparing humanity to the frog.  We may have fast cars, a Dollar General in every trail town, and carbon fiber trekking poles, but at least the frog isn’t responsible for stoking the fire under the pot. 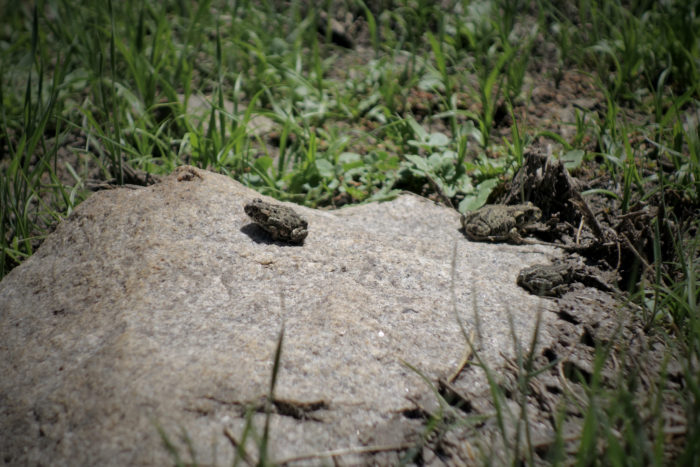 Harder to boil than they look.

In reality, a frog will notice the foreboding temperature rise and remove itself from the heating water.  Like the frog, we have identified with certainty that our collective action is altering the climate in dangerous and destabilizing ways.  Now we need to do something about it, and we can’t just get out of the pot.  It’s the only one we have and it’s surrounded by outer space.  Unfortunately, unlike the frog who has only itself to please, cooling down our pot will require a coordinated group effort, powered by the united will of billions of people.  We need to extend our compassion and empathy beyond our immediate friends, families, and communities.  It must spread across borders, across oceans, religions and cultures.  We are all in this together, for better or worse.

Humans, Don’t Be Afraid to Multitask

Humans are undoubtedly special, but we are also flawed.  As a collective we do amazing things, but as individuals we can be short-sighted and petty.  This is no surprise.  Humanity has never faced an existential threat quite like climate change, one that is exacerbated by decades of inaction, and so has avoided learning to look too deep into the future.  Instead we get caught up in our own lives with smaller, more immediate things to distract us (COVID-19, ever heard of it?).  I am as guilty of this as anyone. 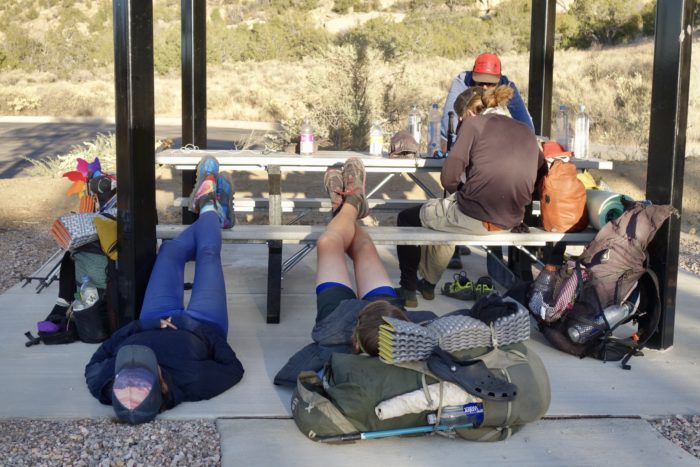 We can relax and contemplate climate change at the same time. Take that frogs!

Our house is burning down.  So why is it so hard to stop shopping on Amazon, or thinking about the next big hike?  Well, fortunately we can multitask, focusing on important issues as well as the fun stuff.  Celebrating birthdays and playing ping pong are still possible.  All we need to do is choose to care about the climate a little bit as well.

What do we do about it?

Like most problems that I like to ignore, there is no easy, or even obvious solution to climate change.  Often, it feels beyond my power as an individual to make a difference.  But each of us can make a difference.  And we need to.  In this research letter, the authors research and outline the most effective actions an individual can take to reduce their negative climate impacts.  They conclude that the top four actions are: having one fewer child, living car-free, avoiding airplane travel, and eating a plant-based diet. 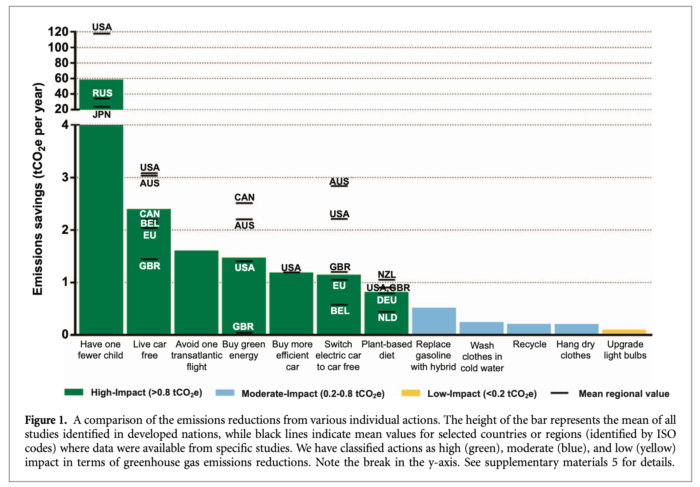 Look at the benefit of having one fewer child. 120 versus 2.5 for the next largest. Astounding! Chart via

Depending on where you live, living car-free might be impossible for now, but the other three are readily achievable for anyone serious about making a difference.

Other than that, I’ve heard that voting works, either with your dollar or at the ballot.

The Triple-Crown of Environmentalism

Fortunately for the hiking community, these lifestyle choices are easy to support from the trail: 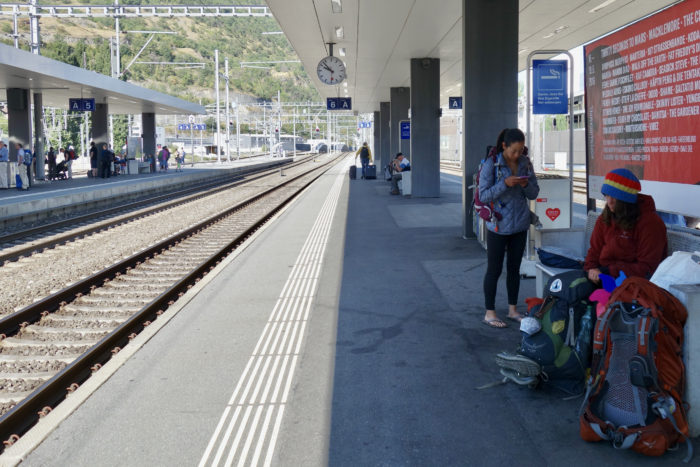 Trains are an environmentally friendly alternative to cars. More relaxing too.

Those are four impactful choices that align with hiking.  Go for the Triple-Crown by choosing three of them to focus on before, during, and after your next hike.

The good news is, hiking is never going out of style, and the trails of the world aren’t going anywhere.  However, what might change is how we hikers interact with them.  Continuous thru-hikes of the longest trails may become impossible to all but the speediest hikers.  Even then, keeping a continuous footpath may require significant and numerous detours.  Instead, section hikes or shorter thru-hikes will fill the void left by life-list mega thru-hikes (they’re already super popular now).  Weather and fire windows will shrink, but there will still be plenty of room for a month on the Colorado Trail or three weeks on the JMT. 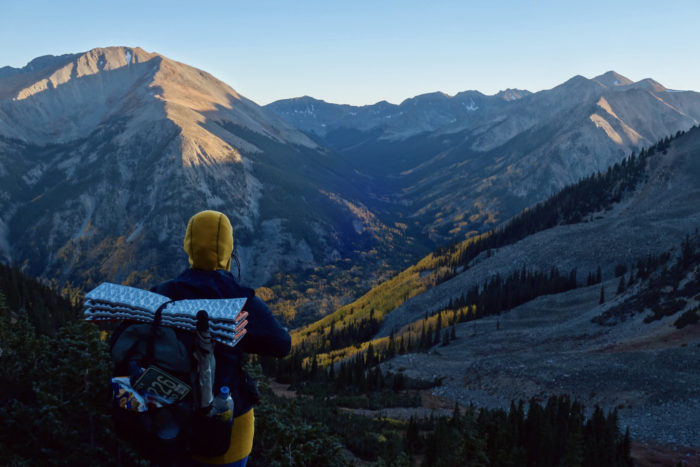 Hiking for even a short time brings me energy and resolve to stay hopeful.

For me, climate change doom and gloom comes in waves.  My puny human brain can only handle so much terror and guilt before I need to reset by getting outside, lest I become overwhelmed and useless.  Hopelessness is draining and unhelpful.  Being bummed out won’t help solve the climate issue.  Hiking helps me reconnect with the earth and remind myself why I care about the planet in the first place.  I return home energized to do better.

We Are All Environmentalists 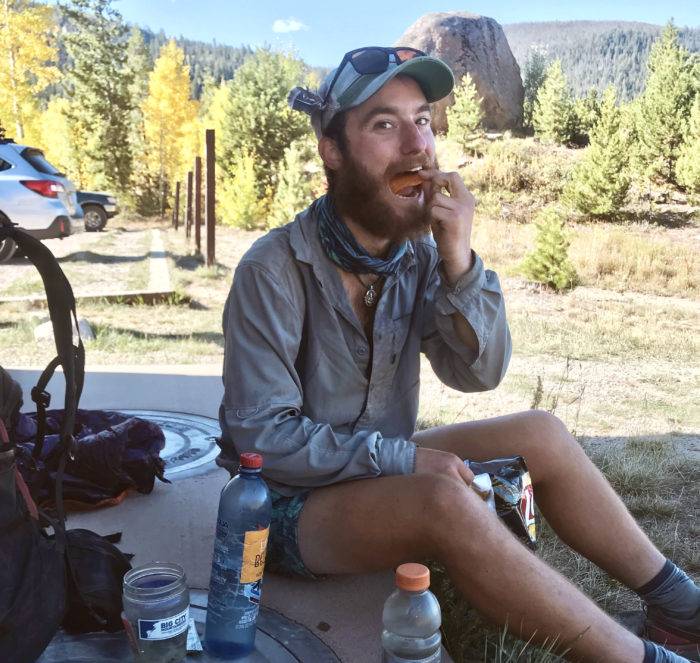 I’m eating Lays instead of granola, but I’m still an environmentalist. Photo: SpiceRack

Our home here on our pale blue dot is a beautiful one.  I think that we hikers understand this more than most.  Let us use our eyes and ears to notice the human-influenced changes to our beloved landscapes.  Let’s use our voices to keep them in the conversation.  Let’s use our actions to demonstrate how much we care.  You don’t need to quit your job and move to a granola economy to be an environmentalist.  All it takes is small actions and caring enough to learn more and do better.  I know that all of us are capable of this.  If thru-hiking has taught me anything it’s that big things are possible one step at a time.  That’s how we got into this mess, and it’s how we’ll get out.