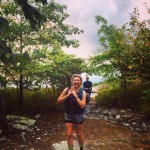 The Wild and Wonderful Whites

The Whites began with the great Mount Moosilauke. The “troop” I have been traveling with took the summit together one foggy day after a fun evening prior at Hikers Welcome, by far one of the best hostels on trail in my opinion. We ascended approximately five miles straight uphill to the summit, where winds up to 60 miles an hour tried to knock us off. Barely able to hangout long due to the wind, the troop quickly descended on to the steepest downhill on trail. The downhill is one mile but took over an hour for me to hike, being that one must cling onto metal and wood rebar in order not to fall. Moosilauke is a full day hike for many hikers, including my troop and myself.

The following day after Moosilauke, the troop had a fantastic idea to attempt a 17 mile slack pack day. Slack packing for those who don’t know is where you carry a lighter pack and leave the majority of your pack contents in the closest town. The troop split up into Team A and Team B to head out to the trail. I am a consistent Team B hiker, aka the slower paced team. Team B made the mistake of leaving about an hour after Team A and the slack pack turned into an overnight event. I quickly realized we would not be making our miles by dark, and Team B ended up sneaking into a hut to “stealth” camp. The huts in the Whites are more or less mini resorts for hiker tourists. They are overall not the biggest fans of hosting thru-hikers. However on this night they proved to be hospitable, and were able to give us overnight slack packers some blankets, I was very thankful. We finished our hike out in the morning and hitched straight to the local Mc Donald’s, before even retrieving our belongings and linking back up with Team A who had been able to complete the miles the prior night just before dark.

Franconia Ridge and the Presidentials did not disappoint. We were blessed overall with great weather. However one night after being turned away by two huts, the first of which we were too early for work for stay, the second we were too late, I woke up in a totally flooded out tent. I had been assured from the hut crew it would not rain, and that camping on the downhill past the hut would be good. After packing up all the wet belongings, I ended up sleeping on the hut porch anyways, it was the only option in order to stay warm enough with wet gear. Luckily the next day we were able to make it to a campground where we could dry our gear out.

Lake of the Clouds was by far the most hospitable hut. They hosted 20 of us for a work for stay. The next day we summited the Great Mount Washington. On the decent, my hiking partner and I got lost in the boulders adding an extra two hours to our travels that did not count towards our progression. The hut did not have room to host us that night, so the troop progressed on a steep off trail almost one mile downhill in the dark. If that wasn’t enough, the following morning was a boulder scramble all the way up and over and down Mount Madison.

These are some examples of how wild things got in the whites, but the beauty the entire time was remarkable. I could actually see where I had hiked from and where I would be hiking the next day. Having the troop around was wonderful for morale when I was feeling defeated or down.

The trail had many sketchy moments but overall was maintained quite well. There were many boardwalks crossing over swampy areas and ladders for assistance on many steep rocks. That being said, thru-hikers have to pay close attention to the trail in the White Mountains because they are far less white blazes and far more side trails than we are normally used to seeing. The Whites were the craziest hiking I have done in my life thus far, and inspired me to challenge myself to tougher climbs, and higher heights for the future. The wild moments, such as the overnight slack pack and the flooding, that were not always so funny at the times, will be some of the ones that the troop will remember and laugh at most.

Hi my name is Eliane, you can also call me Elle. I am from Frederick, Maryland and recently graduated college from the University of North Carolina Asheville. In Summer 2015, I served as the Visitor Service intern at ATC Headquarters in Harpers Ferry, WV. Here, my dream began to thru hike the trail and I will head NOBO in March 2016.