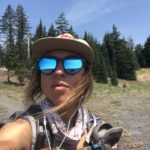 “The worst day on trail is better than the best day in town.”

Have you ever had a person, maybe a friend or a partner, that you just can’t seem to stay mad at? They frustrate you or annoy you but no matter what, any anger you might have had slips away when they tell you a joke or smile their smile or whatever it is that they do. In my case, it seems to be my dog that I can never stay mad at, and he definitely is catching on and becoming increasingly bolder (read: naughtier) because of it.

At any rate, I was walking along on my ninth day being on the Pacific Crest Trail, thinking about chips and guac and beer – all of which I’d been craving while hiking – when I saw an older section hiker heading north as I was heading south. I said, “Hey how’s it going?” and he replied with, “Oh, you know, the worst day on trail is better than the best day in town.”

I smiled, nodded, and kept moving, back to thinking about those things I wanted really badly from Leavenworth, the next town I’d be in. After about another mile or so, though, I realized that maybe he was right, and that the trail is something that I can’t stay mad at.

At this point, I have been walking south for 13 days. One look at my legs would tell you that the rumors about insane amounts of mosquitoes, blow downs (fallen trees that covered the trail), and overgrowth this year are true. A couple times per day I smash my shins and cut them open on a hidden rock or branch that I didn’t see because the brush is so gnarly, and when I stop to evaluate my new injury, I get swarmed by bugs and am forced to push on.

One day, I was so frustrated while navigating the aftermath of an avalanche, which had covered the trail with snow and fallen trees to the point where I got lost for about 15 minutes. When I pulled out Guthook to check my bearings, mosquitoes flew into my eyes and nose and chewed up my exposed arms and legs. That was the first day that the trail had led me close to tears, and I remember shouting out for no one to hear just because I felt like I couldn’t catch a break.

Another day, though, I was hiking along and it was a hot one. I was walking through a particularly overgrown section, where the ferns and other lower bushes would smack and whip your legs as you pushed through them. I remember thinking about how the smell of the moisture in the air and around the plants was almost suffocating; it was thick and I was out of water and hitting a low point in the day. I checked Guthook and saw that the nearest water was a mile, and it said it was going to be a creek. I almost rolled my eyes at the map, thinking about how it would probably barely be flowing and all I wanted was to rest and soak my feet and take a break.

I pushed on, and a mile later I came to what would be one of the most beautiful bodies of water on the trail. No bugs, waterfalls cascading down cliffs and into a giant valley below me, a suspension bridge above me, and the flattest sitting rock ever (half in sun half in shade!!). I could have cried, and was amazed at how the trail gave me exactly what I needed at that time.

Since I had that interaction with the section hiker, I’ve been trying really hard to look at the obstacles that the trail has presented me with this far as external factors from the PCT itself. Many times now, I’ll be trudging along, feeling hungry or tired, and I’ll turn a corner and catch a few that takes my breath away and reminds me why I’m there.

I’ve been trying to slow down (I’m a fast walker) and start each day with an intention; sometimes it’ll be taking time to swim in rivers and lakes, or to stop and write a post card or in my journal when I’m feeling like I have something to say in that moment, rather than waiting til camp. And some days I love the physicality of the trail, and want to do big miles to get to a cool campsite or over a big hill before going to sleep.

Mostly, though, I’ve been feeling really grateful for the trail, for letting me walk all day every day — just so that I can see where my legs will take me.

The hiker was headed for Stehekin and I am now further south, but I hope he enjoyed his town day(s) as much as I ended up enjoying my chips and guac and beer. As for whether a good day in town is better than a bad day on trail, I think I have a little more walking to do before I can fully be on board, but I think that’s the point of all this; by the end I’ll probably be saying the same thing to people just starting out, too.

Soon, my legs will hit trail again — probably sooner than his, but I’m sure he won’t be too far behind me. We’ll both be going different directions, but I’ll without a doubt be thinking about what he said when the next obstacle arises, and it’ll help me push on.

Howdyyyyy! I'm Rachel aka Sassafast and I'm a New England native who spends her time running, skiing, biking, kombucha brewing, and trying to tire out her dog. I walked from Washington to California on the Pacific Crest Trail before having to end my journey due to wildfire closures. Now, I’m headed northbound on the Colorado Trail 🤘🏼