This one time, at Fontana Village, back in early May, I was hanging out by myself in the lower level of the lodge when I heard the door open behind me, and a voice.

“You ain’t one-a them hackers, are you?” the voice said. I looked up as a 70-something man came around the sofa into my line of vision. He wore thick glasses, and white hair protruded from underneath a light gray cap with wings embroidered on the front.

“You hacking the whole thing?” He placed his palms carefully on the backrest of the sofa across from me and stood waiting, incredulity and delight already on his face. 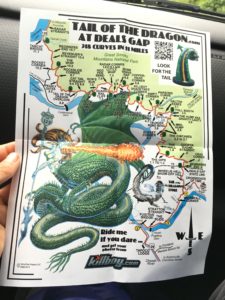 Paul and his buddies came up here often. He was a vet—had been a Green Beret—and lived now in Florida. He told me about the store at Deals Gap, along the Tail. He told me about “Killboy,” a photographer who camped out under a tent and snapped bikers coming around a curve, their jutted knees skating along just millimeters above the asphalt. He told me there was a “tree of shame” at the Deal’s Gap Motorcycle Resort, where bike parts dangled like Christmas ornaments, winking sunlight into the eyes of momentarily silenced visitors.

I told Paul I was taking a zero the next day to give the Smokies time to warm up and dry out from the cold wet spell of weather we’d been experiencing. I realized that I wasn’t trying to think of a way to end the conversation, which I would have been doing in my off-trail life, partly because I’m introverted and partly because off-trail life simply runs at a higher speed.

“You been up to Deals Gap?”

One feature of thru-hiking I wasn’t prepared for was the lack of there there in a lot of places where you stop for laundry, a shower, a night on clean sheets, and resupply. Fontana Village was one of these places. Coming down off the mountain we’d assumed public transportation, shops, restaurants. Instead there was a resort, a dam, and a marina. The resort had a couple of restaurants and cabins, a lodge, a general store, and coin-op laundry. The dam was run by TVA—Tennessee Valley Authority—and had a visitor center and a gift shop with some snacks, a soda machine, restrooms, and photo ops.

Paul had a pickup. “You want to ride up to Deals Gap with me tomorrow?” Although his friends would be out riding their bikes, he hadn’t brought his up for this visit.

And so the next day, after breakfast I made my way to room 131, where I found Paul fussing with a trailer behind his white truck. He put down his tools and invited me to hop in the cab.

Was this crazy, getting into the cab of a truck with a man I’d met just the night before? A man I knew next to nothing about, getting ready to ride who knew where? When I really thought about it, the only thing I could be certain of was that cell service would be uncertain.

Thinking these thoughts but getting a good, trustworthy vibe off of Paul, whose faded blue jeans and white athletic shoes gave him an aura of harmlessness, I hopped in. The inside of the cab was neat, and I apologized for the caked-on mud that immediately began to flake off and land on his floor.

Once we got out of Fontana Village and onto Route 28, the road was twisty, and Paul took the curves with great care. “I been riding these roads since 1969,” he said.

He said, “You want to see the dam first?”

We rode along and as we took the curves, items on the bench seat between us slid into me then slid back into him. We passed some awesome geology and he slowed down for me to capture the folds on film. He told me about a book he had read about a hiker (I’ve since forgotten the name), and I told him about Bill Bryson’s A Walk in the Woods. 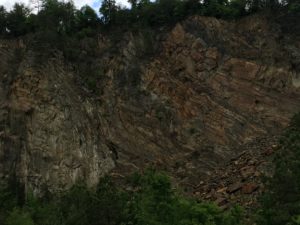 The dam, and Fontana Lake, were duly impressive. Paul told me about military exercises in which he and comrades had jumped from planes, landing in the frigid lake. I shuddered to think. We stood looking out over the water and he told me about his wife, an attorney who stubbornly hadn’t retired yet. 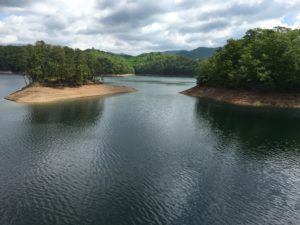 In the visitor’s center, I paused at a snack display. “You get you something,” Paul said when he spotted me. “Get you a couple somethings.” I selected a bag of chips, some peanut-butter crackers, and peanut M&Ms, tearing into them before we even checked out. I spotted Bryson’s book on the shelf and pointed it out to Paul. He looked up at me with blue twinkling eyes and pulled it down from the shelf, put it on the counter, and told the cashier I was walking from Georgia to Maine.

His book and our snacks paid for, he slid the book over to me on the counter and asked the cashier for a pen so I could sign it. I laughed and let this idea tickle me even as it embarrassed me; not only did I not write the book, I was just getting into the stage of my hike where I was recognizing the low probability that I would actually walk all 2,189 miles of the trail.

Paul looked at me expectantly and nudged the book a little closer to me, though, so I opened it up and wrote a thanks for the time together and the snacks, and signed it, “Notebook.”

What a guy, I thought. He is up here with his buddies and he just invites this perfectly random hiker to gallivant around the foothills of the Smokies with him. He conceded his friends found it odd that he was doing so, and I thought that my friends back home might find it strange to spend a day as I was, as well. But it seemed to be working for us.

Still munching happily on chips and M&Ms, I climbed back up in to the cab and felt something pressing into my left butt cheek. l leaned to the right and lifted up a towel to see what it was.

At the motorcycle resort, Paul insisted on paying for my coffee, and we walked up and down the parking lot, looking at the rows of bikes, and we marveled at the Tree of Shame. Paul said in the summer you couldn’t even squeeze another bike onto the parking lot; it would get so packed. We walked across the street to the Tail of the Dragon store where they sold and rented GoPros, and we perused the stickers you could buy and slap on your helmet or your bike. Then Paul took two folding chairs out of the bed of his pickup, and we sat under a rumpled, cloudy sky watching bikers pull in and out. Paul’s friends were due to come along shortly, he said. 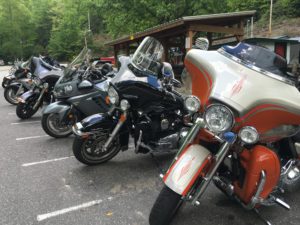 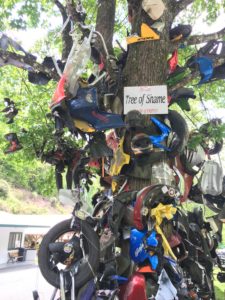 The fact I had been walking for three weeks meant my body needed not to be in motion, and I didn’t feel the urgency I typically feel at home to be productive or to use my time “well.” I also felt certain that hanging out in this manner with Paul was using my time well. It was simply connecting with a person, sharing and appreciating his universe. Enjoying and being immersed in motorcycle world, a subculture I have no prior experience with.

“I been riding these roads since 1969,” Paul said. I smiled. “You want something? You need to eat anything? A snack?”

Mostly it was cloudy and quite cool, but occasionally a ray of sun would hit us, and we’d hooray the warmth, close our eyes, and tip our heads backwards.

Paul’s friends didn’t show and didn’t show, and finally we got back in the pickup and he drove me back to the lodge.

After doing laundry, I went back to my room to journal. Out my window I could hear a lot of laughter and shenanigans outside Paul’s room, and I smiled and thought of joining them, but a clean bed, clean clothes, and vertical surface to lean against while journaling were just too good to leave.

After a little while I went to the lobby for wifi. I saw and overheard a group of guys describing the wreck one of them had had that afternoon, thanking god it was just the bike that had been destroyed. “It’s only a thing. I can replace that.” Later I learned these were Paul’s friends.

“Notebook?” I looked up, and a hiker said, “Are you Notebook?”

“I’m The Man,” he said. He and some other hikers had been hanging out down with Paul. “He kept asking where you were,” he said. Aw! “Well, we’re all going to meet in the restaurant for dinner at seven. You’re invited.”

I smiled, just so delighted at the simple feeling of being sought. Like, when in real life is it this easy to make friends? 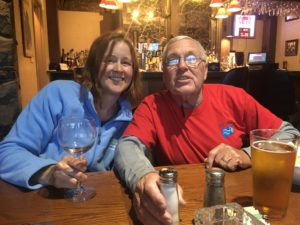 At seven I joined Paul and an enormous group of hikers in the restaurant for wine, ribeye, stories, laughs, and a breathtaking sunset out a massive plate glass window. If I get nothing else out of this attempted thru-hike, I realized I’ll know I spent a day with a kind, generous man and managed simply to enjoy it. 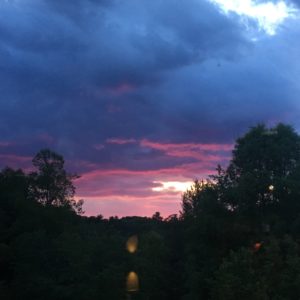 Looking back on it a few months later from a comfy sofa with a healing broken foot, I’m reminded of other trail moments that drove home the importance of that realization—those moments of pure and simple human connection. At the end of the day, they’re all that really matter; in fact, they’re all we have.