The Thru-Hiker’s Code of Conduct

Recently, the Baxter State Park Authority issued a letter to the Appalachian Trail Conservancy voicing concerns about the behavior of thru-hikers.  Instead of paraphrasing the letter, you can read the important sections for yourself below (click to enlarge). 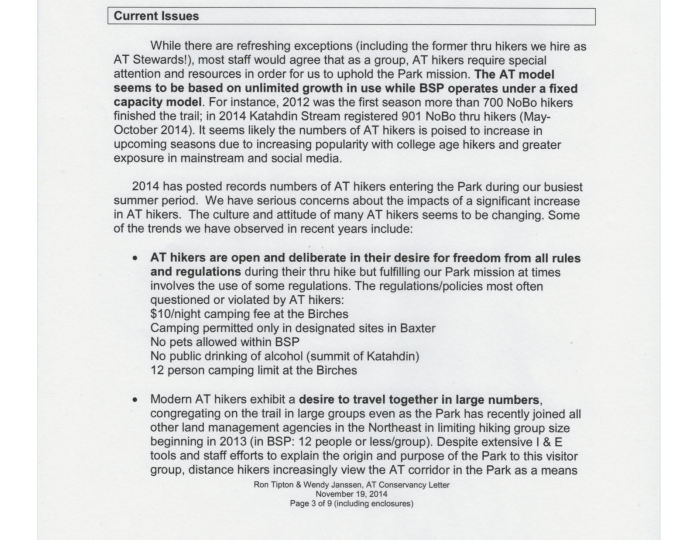 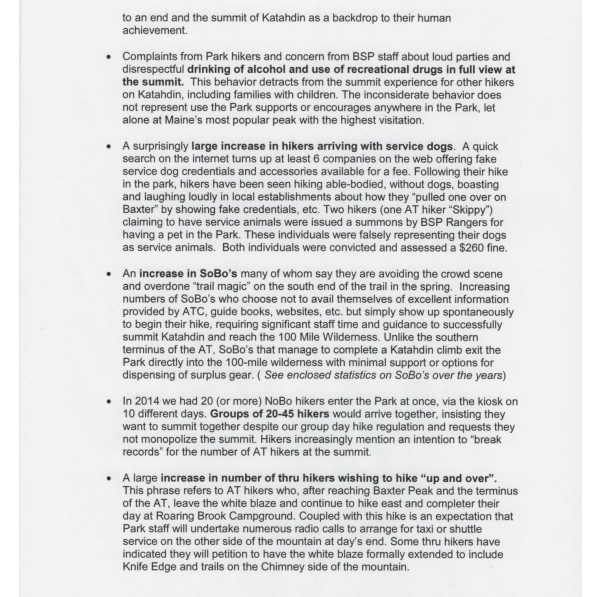 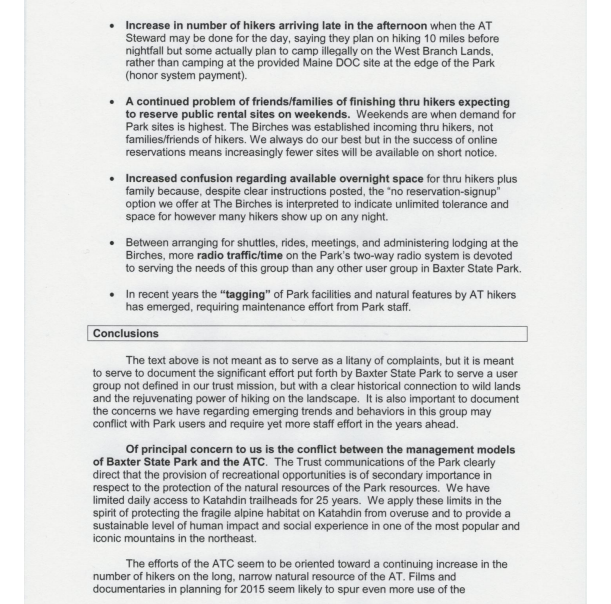 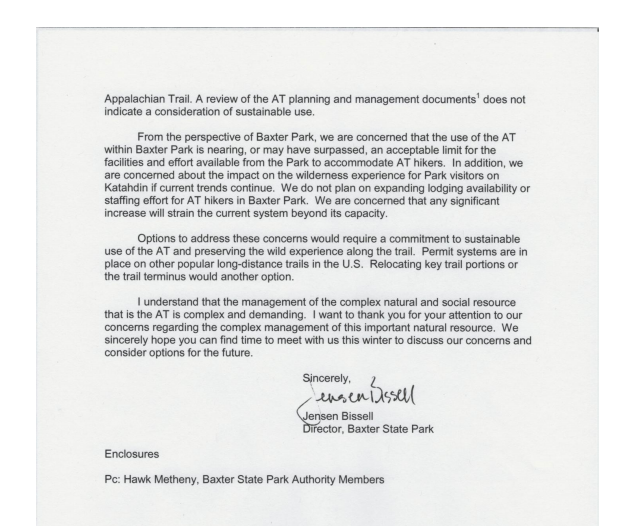 Some in the thru-hiking community have taken issue with the tone of this letter, as it appears that the few bad apples have spoiled the thru-hiking bunch in the eyes of the BSPA.  To those who are upset, I ask you to please drop your guard.  The thru-hiking community has nothing to gain from adding more animosity to the situation.  The BSPA’s goal is to preserve and maintain one of the country’s most beautiful parks.  Our sole focus should be on how we can support this very important mission, whilst doing our part to maintain Katahdin as the northern terminus of the Appalachian Trail- a reality that could very possible change.

There is no defense for the actions of those who blatantly disregard park regulations, however, I will say that during the year of my thru-hike (2011), I was unaware of many of the park’s rules, including the limit on group size while summiting Katahdin, the availability of campsites for friends and family, and a ban on alcohol.  As it just so happened, I summited with a rather modest sized group (I believe there were seven other thru-hikers) and I was met by no friends or family at the park, but this was a result of chance rather than design.  I did however drink a beer at the summit and thought nothing of it.

Since the release of this letter, I have spoken with several other thru-hikers who were also entirely unaware of these regulations and the unilateral friction amongst park staff and the thru-hiking community.  Park rules in the White Mountain National Forest and Great Smoky Mountain National Park are widely understood amongst thru-hikers, and I’d venture to guess that a lack of compliance is less of an issue because of it.

Regardless of who’s at fault, one thing is certain, there needs to be better public advocacy for BSPA’s rules.  It is the responsibility of hikers themselves to become familiar with these rules- but more importantly, it is the responsibility of those who have the bandwidth, including the ATC, AWOL’s website and Guide, White Blaze, and this site, amongst others, to ensure that we’re doing our part to promote these rules.  We will dedicate a separate article to outlining Baxter State Park’s rules; in the meantime future hikers should familiarize themselves here.

Despite the negative attention this letter has drawn, I am happy that it’s brought light to a problem, as that’s the first step in finding a solution.  Unfortunately, the problem that the BSPA has addressed is only the tip of the iceberg.

Although the vast majority of hikers I encountered during my thru-hike and since have been nothing but respectful of the AT and the culture that surrounds, it is the disrespectful minority who pose a very serious threat to the future of the Trail.

Most hiker-friendly businesses, especially hostels, make little to no profit.  Oftentimes, they exist to serve hikers because the majority of hikers brand the community with a positive reputation.  The majority of hikers are thoughtful, adventurous, selfless, funny, trustworthy, endearing, grateful, but above all, respectful.  They take nothing for granted, and appreciate every ounce of help that is offered along their journey.  Those who lend the helping hand recognize this, and their incentive for helping is merely the positive feelings that come in part with altruism.

As a result of increased exposure of long distance backpacking in the mainstream media, highlighted by a pair of major motion pictures- Wild and A Walk in the Woods– as well as sites like this one (and we unabashedly support people getting out into the mountains!), the popularity of thru-hiking, section-hiking, and overall use of these precious trails is on the rise. A very possible consequence of this is a rise in the uninformed and/or disrespectful minority of hikers.

The bad news: if the trend of entitled, disrespectful, and rule-breaking thru-hikers continues to grow- we risk losing the Appalachian Trail as we know it.  The hostels shut down, more businesses close their doors to thru-hikers, re-routes take us away from iconic Trail highlights, and above all, the ATC and other trail maintaining groups lose their ability to upkeep the trail at a pace to meet its growing demands.  In other words, we destroy the thing we love most.

The good news: we can prevent this from happening.

The following is not a shaming of past or present thru-hikers.  How you behaved on the Trail is irrelevant.  This is only about what needs to happen moving forward in order to preserve the Trail.

The following is a code of conduct for future thru-hikers, created by former thru-hikers (thank you Kenny, Carlie, Maggie, Madison, and Mariposa), those who have had their lives transformed by the trail for the better and want to see this unbelievably special opportunity remain accessible to all who wish to take part.  Most importantly, it is EVERYONE’s responsibility to ensure that this code of conduct is being upheld.  If you see someone deviating, doing or saying nothing makes you every bit as responsible.  If you see someone doing something wrong, speak up.  Their actions impact your ability to enjoy the trail moving forward. As fellow Appalachian Trials writer Maggie Wallace so eloquently put it, “I think the trail itself needs an advocate more than the hikers do right now.”  Be this advocate.

The Thru-Hiker’s Code of Conduct

Again, this Code of Conduct is not meant to be a holier than thou lecture.  I’m not claiming to have followed these guidelines 100% strictly during my thru-hike nor are the other thru-hikers who have offered input in its creation.  The point is, with growing numbers, future thru-hikers will need to be held to higher standards in order to maintain the AT that we all know and love.  The alternative, as the BSPA has already alluded to, could be dire.