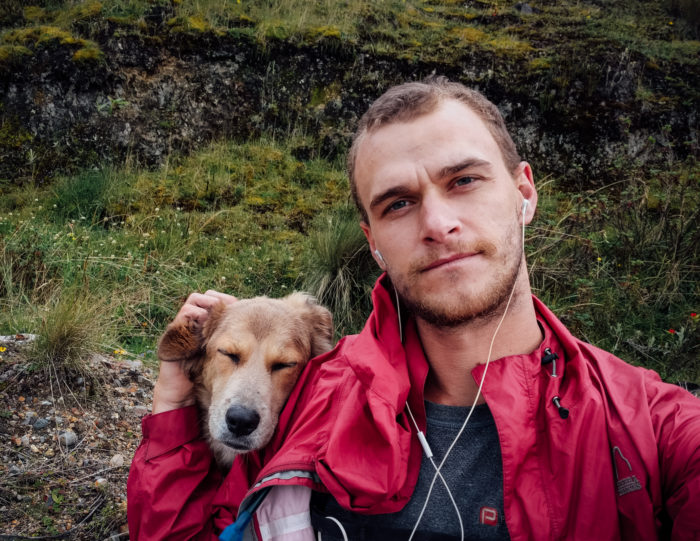 It all began more than half a lifetime ago when Turcich was 16 and his friend Anne Marie Lynch, 17, died in a jet ski accident.

“She went suddenly, randomly, and she was one of the nicest people I knew,” Turcich says while walking across the Midwest in early 2022. “I thought, if she can go like that, I can go like that.”

About a year later, he saw the famous scene from the movie Dead Poet’s Society — made in 1989, the year he was born — in which Robin Williams’ character says, “Carpe, carpe. Carpe diem. Seize the day, boys. Make your lives extraordinary.”

“OK, I thought, I’m definitely going to die,” he recalls. “I’m going to make the most of life, and what does that mean to me? It came down to adventure, to seeing the world. I wanted to use my body and understand the world, not just be a tourist, but see the world as it really is.” 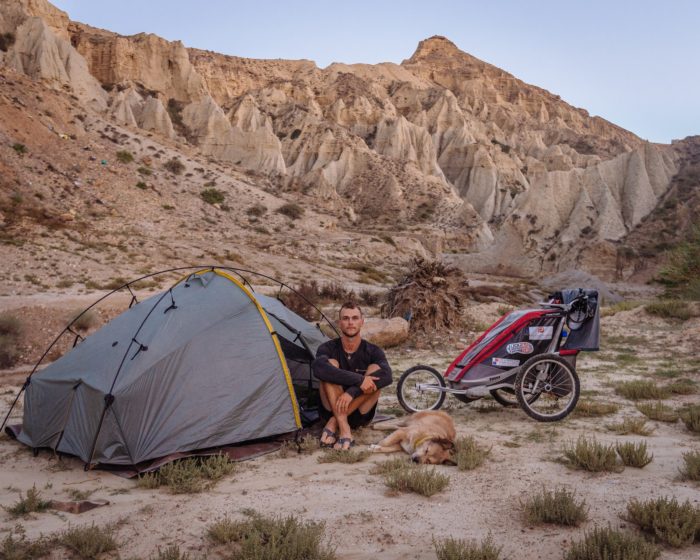 Exploring ways to make his dream come true, he learned about American Steven Newman, who walked around the world in the 1980s, and former British paratrooper Karl Bushby, who set out to do the same in 1998.

“That stuck in my head. It seemed to solve everything I wanted out of life,” Turcich says. He wasn’t seeking enlightenment or purpose: “It’s all right just to want to do something for the sake of doing it.”

He set out just before his 26th birthday. Until then, the only long-distance walk he’d done was 10 days on the Appalachian Trail. A friend made a custom wheeled cart and he started with 60 or 70 pounds of gear. But the cart was ungainly and heavy, and after breaking an axle, one of his sponsors, Philadelphia Signs, gave him a beefy Thule Chariot Cougar baby carriage.

“It’s hyper-engineered with shocks and sport tires, perfect for long-distance,” he says. “If you were thru-hiking, you could never have a cart like this, because of rocks and whatever else on trail. But it’s perfect for what I’m doing.” 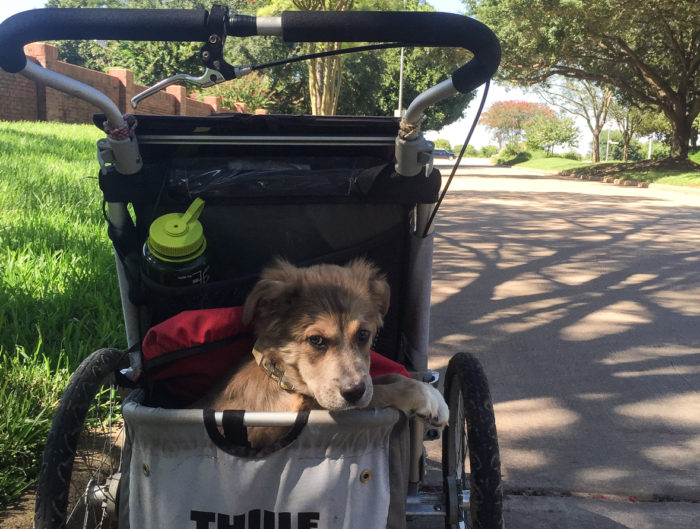 Baby Savannah in a fancy Thule Chariot Cougar baby carriage, which Tom Turcich used for most of his seven-year walk around the world. Courtesy Tom Turcich.

He quickly winnowed down his kit and got his food and resupply strategies dialed in.

“The way I started, in the U.S., allowed me to work out a lot of kinks — and I had a lot to work out!” he says. “One of the primary things was figuring out how much food and water I need. It’s something you have to have that lived experience to know how much your body is burning. If you don’t eat enough one day, the next day you’re paying for it and you have to shovel food in your face. But by the time I got to Mexico, I had been walking for four or five months and I knew what I was doing.”

As do all long-distance hikers and walkers, he suffered his share of aches and pains in his knees and ankles, cramps in calves and hamstrings, you name it. And like many hikers, he learned that cutting down on gear weight was an excellent way to reduce his suffering. 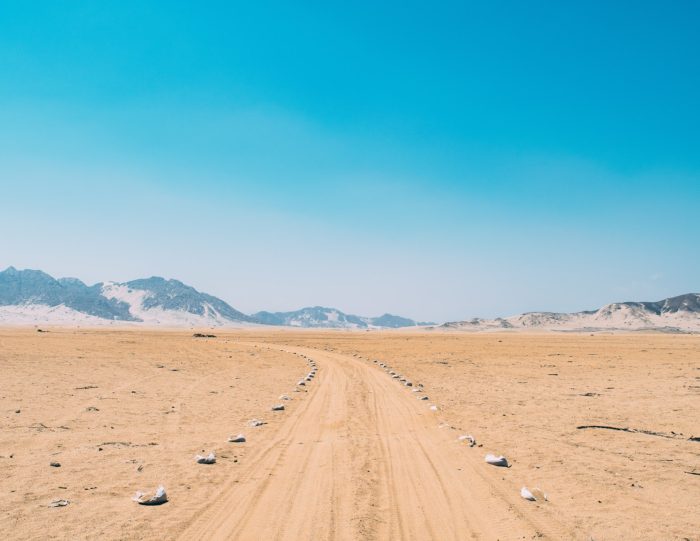 “I brought way too much in the beginning. I thought, ‘Why the hell am I pushing this up a hill?’ I started tossing this, tossing this, whittling the weight down,” he says.

But while he learned not to carry too much gear, he also didn’t skimp on comfort: “I think it would be really hard to walk around the world with just a backpack. The cart allows me to bring luxuries, a heavier tent, my laptop and camera. I don’t want to be ultralighting — that would drive me insane!”

Turcich always imagined making the journey alone. But after an unsettling encounter with a “creepy guy” in Georgia, he began researching whether he could have a dog in the countries he planned to visit. A dog, he figured, would alert him to approaching strangers and potential dangers.

About five months into his trek, he visited a shelter in Austin, Texas, where he adopted a puppy who had been found at the side of the road with a sibling. He named her Savannah.

While happy to have a companion, it took a couple of weeks for Savannah to lose her fear of traffic and cars. But other than that, and a single incident of sandal-chewing, she took to her new nomadic life as if she’d been born to it and has known no other life. 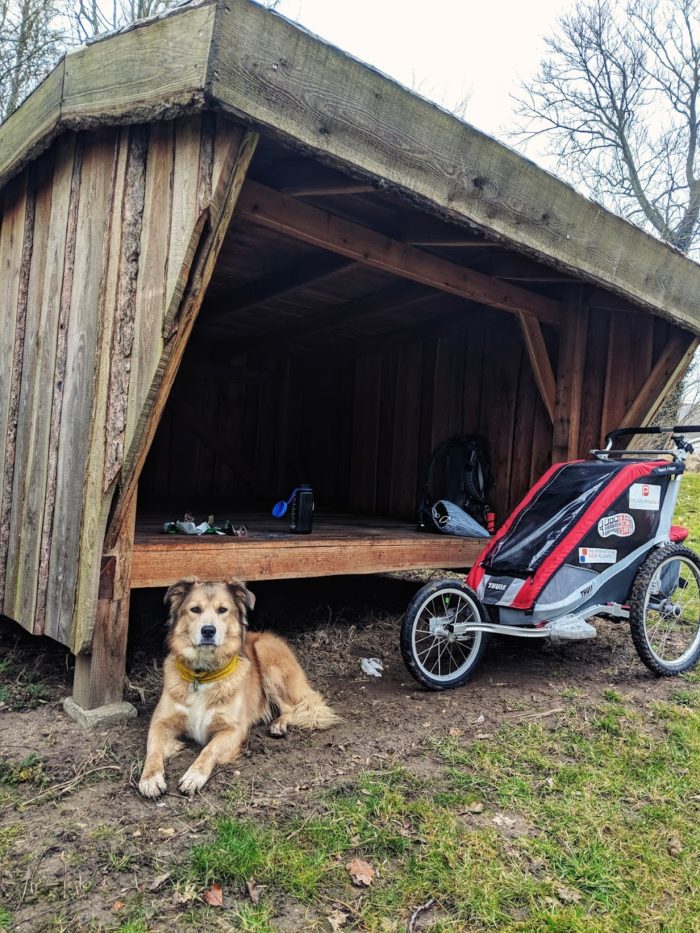 “She’s a good work dog, a little bit serious, but playful when it’s time to be playful,” Turcich says. “She is such a beast! I don’t know how she feels day today, but on days when I feel like shit, she’s going along, tail up. Maybe she’s feeling terrible too, but she’ll do 24 miles in snow, heat, mountains, every sort of terrain, and doesn’t complain.

“I’m madly in love with her. It’s moved well beyond affection and at this point it’s very profound respect for her. It’s almost like she’s my daughter,” he says.

From Texas, the duo crossed into Mexico, where locals feared for their lives because of the presence of violent drug gangs. In Honduras, Turcich clenched in fear when a man exited a truck wielding a machete and climbed to where he had pitched his tent. The man was looking for someone who had stolen a cow, and once he saw it was “just a gringo,” he left him alone.

In Guatemala, after pushing his heavy cart up a steep mountain, a local man invited him to stay at his home. He was awestruck when he caught his first glimpse of beautiful Lake Atitlan.

“Some call it the most beautiful lake in the world. When I saw it for the first time I thought, ‘Oh my god, this is insane.’ I knew it was coming, but I was not expecting that view,” he says, calling it one of his favorite places in seven years of walking. 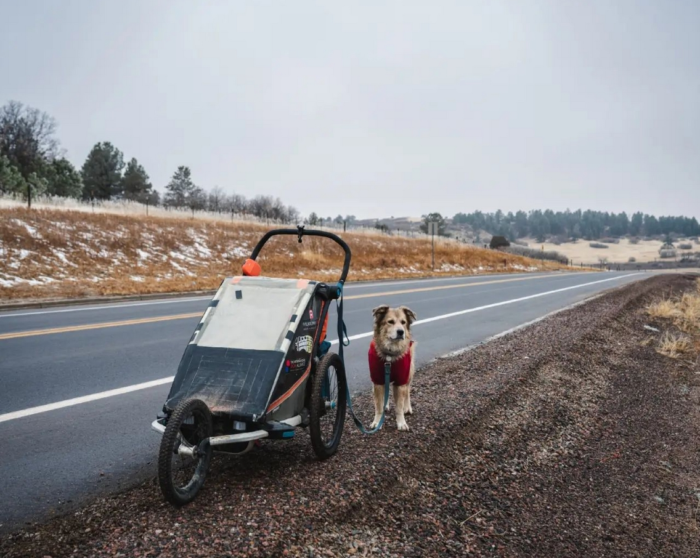 Tom Turcich’s dog Savannah in Colorado, where he took a brief holiday sojourn to stay with his sister. Courtesy Tom Turcich.

Turcich and Savannah pushed down the west coast of South America. Feeling uninspired while crossing the desert in Peru, he was anxious to reach Lima, where he planned to stay with a friend. “In a funk” at the end of one day, he came to a tiny restaurant, where there was a shrine to Bushby, whom Turcich had spoken to before leaving on his journey.

“There was an old man sitting there … He opens this book to a page with a note from Bushby in 1999,” he recalled. “It was exactly what I needed on that day. … I had to have that year and a half of walking for that moment to mean anything, and it was amazing.”

After visiting Antarctica, he “zig-zagged” through Europe, then skirted along the coasts of Morocco, Algeria, and Tunisia before crossing the Mediterranean to Italy (he chose not to walk through the Middle East and did not visit sub-Saharan Africa). He and Savannah then walked the Caucasus, crossing Georgia and Ukraine, then Uzbekistan and Kyrgyzstan. Finally, he returned to the United States and began walking from the West Coast. 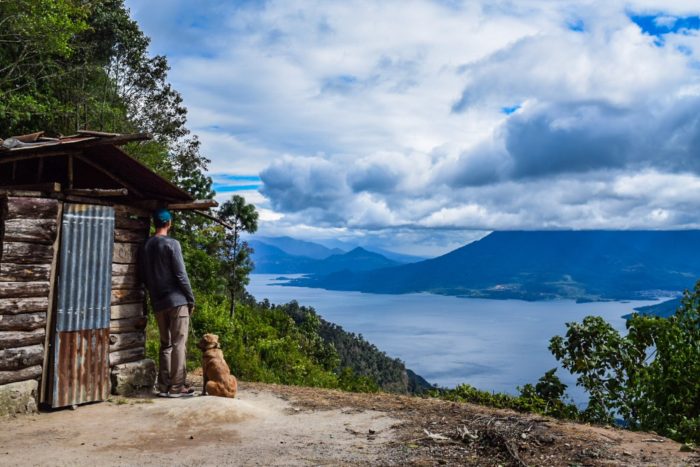 There are too many highlights to name a single peak experience, Turcich says. But he mentions celebrating his 30th birthday in Tuscany, where he ate at a Michelin-star restaurant and enjoyed a free upgrade at a nice hotel, and Georgia (the country, not the state), little known to most Americans.

“It surprised me the most,” he says. “I had no real expectations, but it’s an amazing country. The people were really interesting, the food was incredible, the style was impeccable, the wine was world-class. I was totally caught off guard by how great it was.”

But if he had to pick anywhere on his journey to be his new home, it would be Denmark or Germany, he says.

There were, as every long-distance hiker or walker knows, plenty of lowlights. Algeria was difficult because he was required to have a police escort for the entire 45 days he was in the country. And he suffered from a debilitating infection while walking in Scotland that caused him to lose 45 pounds and forced him first to London, then back home, to recover for seven months, including more than one hospital stay. 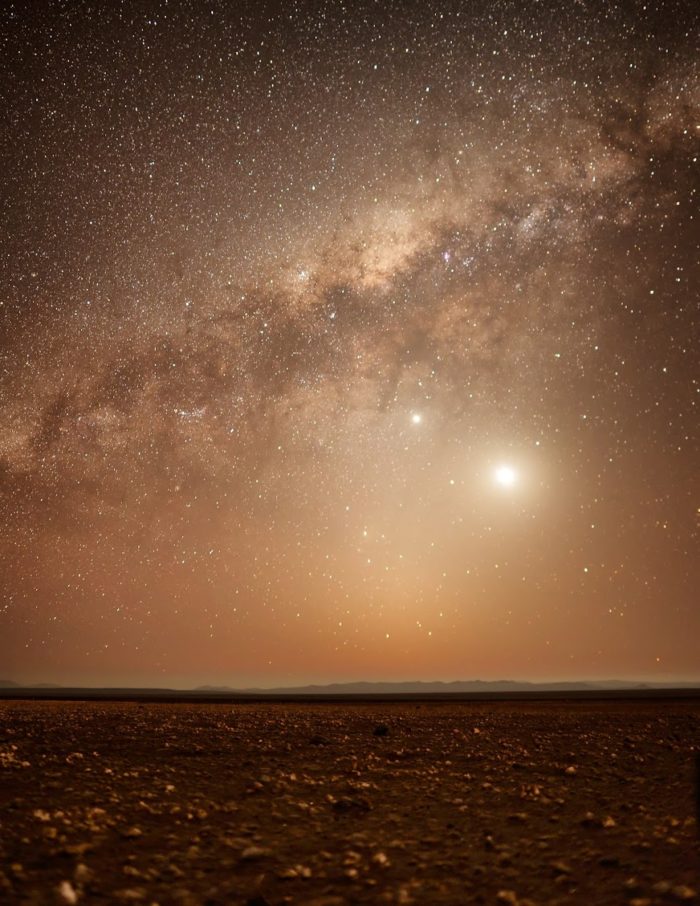 But overall, he approaches the end of his epic expedition with a sense of awe and wonder about the world and its peoples.

“I learned so many lessons about my understanding of the world, like just how much geography plays into the fate of any country. You travel so much, you see people are in general the same everywhere. What differentiates each country, the key variable is geography,” he says. “Geography is destiny.”

On a personal level, he became more comfortable with his limits.

“You walk 24 miles. You can keep going, but the next day, you’ll pay for it. You have to stop and be satisfied with what you’ve done and start again the next day,” Turcich says. “It’s a lesson you can apply to every aspect of your life: Do what you can today, put it aside, and start again tomorrow.” 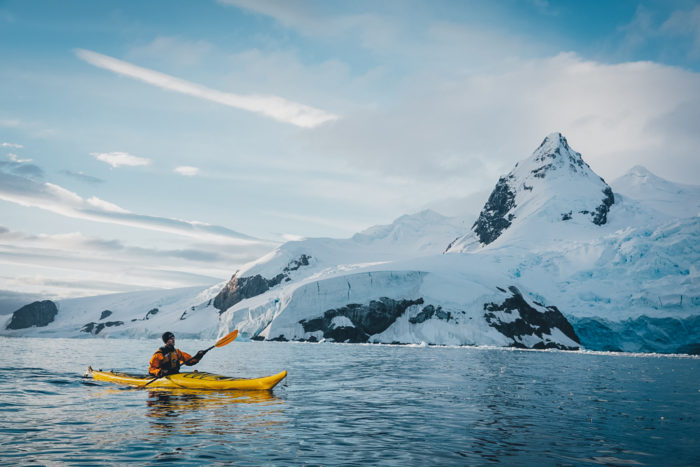 Turcich estimates he went through 40 pairs of Brooks Cascadia trail shoes, which he wore almost every day (though he bought a pair of winter boots to cross “insanely cold” Wyoming in November).

He paid for his journey by saving enough for two years, finding sponsors, starting a Patreon page, and picking up the occasional photography gig.

After a few weeks’ stay in Denver to “wait out the solstice with my sister,” he set out for the final leg in January. He and Savannah are now crossing the upper Midwest with less than 1,000 miles to go. Once they finish, Turcich plans to write a book.

He worries a little about how Savannah will respond to such a drastic shift in her daily life.

“I’ll take her out for a minimum of two hours a day, but I’ll always feel guilty. She can go sometimes eight hours a day and still not get tired; she can always go more, no matter what I do,” Turcich says. “She is my best friend and the ultimate walking companion.”