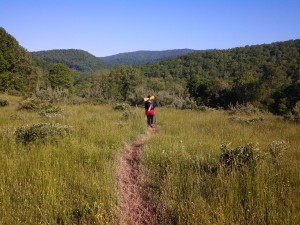 As hikers we spend so much time contemplating the trail, but so few of those thoughts focus on the work beneath our feet.  When I began hiking, I gave very little thought to how the trail came to be.  ‘Trail maintenance’ was a foreign concept to me.  I assumed that the trail’s origin was due to a symbiotic ‘chicken and egg’ relationship with hikers; Hiking creates the trail, and the trail leads to more hiking.  As I found out the hard way when I worked on a trail crew, I was completely wrong. 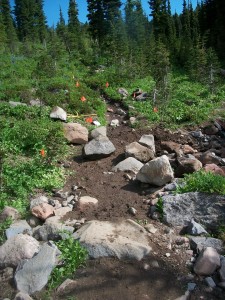 Actually, there is an endless tug of war game being played between trail workers and hikers (and I say this realizing that the two groups often wear each other’s labels).  Hikers erode the trail as they hike, causing it to literally move downhill.  This is known as ‘tread creep’ in the business (it would also make a great though probably undesirable trail name).  The trail sinks and the slight leaning angle of it (which is actually an intentional design to keep water off of the trail) sinks down so that water pools on the inside of the trail and creates muddy trail (known in the business as ‘Vermont’*). 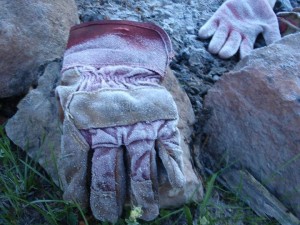 These frozen gloves were hilarious!!

Once enough complaints have filtered in, trail maintainers hike their very non-UL gear into the woods and re-cut the trail.  For a while, it is free of debris and mud.  The pounding of thousands of feet slowly reshapes it, year by year – until a line of hard hats appears again.  It is a balance, a cycle that repeats itself. 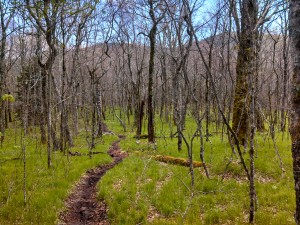 So really, the relationship between the trail and hikers is more like the chicken and Colonel Sanders.  They may seem to be working towards opposite ends, but they need each other to exist (I didn’t actually poll any chickens before making this analogy.)

You might be wondering what exactly trail maintainers do – what does the ‘maintenance’ part consist of?  Believe it or not, moving fallen trees and fighting overgrown bushes are not the most common tasks.  Trail maintainers work with water on the brain.  The goal is to imagine what the water will do and try to discourage it from staying.  So most work is water related. 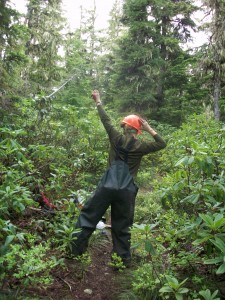 Except for the dancing. That doesn’t prevent water damage on trail.

The purpose of this article is to arm you with a trail work lexicon that you can bust out at the next dinner party, campfire, or hiker eating contest.

I’m a simple person.  I enjoy hobbies like climbing and trail building in part because, in a world of acronyms, the lexicon for these activities is extremely easy to grasp.  Almost all technical words that you learn are self-explanatory and actually sound like what they are (In climbing, a ‘crimp’ is a small hold, a ‘jug’ is a large hold, and a ‘book’ is a piece of rock that looks like a book.  It’s not too complicated.) 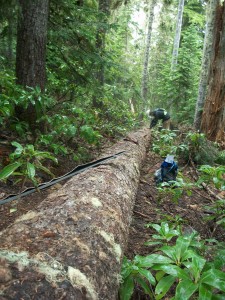 For instance, the technical expression for this tree that fell perfectly along the trail is known as ‘sucky’.

You won’t find too many exceptions to this rule as I highlight some important terms in trail building, so you should actually be able to retain all of it and wow your friends with your cool trail knowledge! (Or annoy them – whatever.) 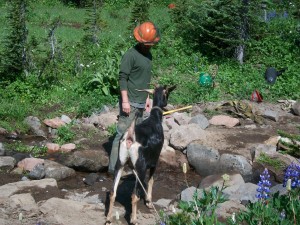 A goat asking a trail worker for passage.

Drainage Dip – Also a possible trail name, this is the most frequently seen design for managing water.  You will step over, step on, and, if you’re like me, pee on hundreds of these during your hiking experience.  They consist of an angled mound of hard packed dirt next to a depression extending off trail.  If you need something to take your mind off of your wet boots during a rainstorm (If any thru-hiker has managed NOT to hike in the rain, please tell me so I can write a book about your amazing phenomenon), you can watch sheets of water get redirected and funneled off trail by these clever ugly betties. 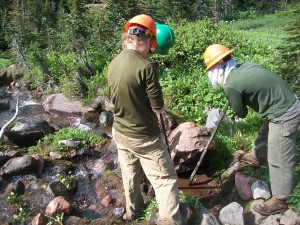 Who put this rock in the trail?  That’s right – that rock is not only intentional, it has a name.  Those big, square, flat-topped rocks set in the trail serve an important purpose beyond acting as a staircase.  Their primary purpose is actually also water control.  What you see as a hiker is usually only the tip of the iceberg – a good check step is set several feet deep and is totally impermeable not only to surface water but to the water that has sunk into the earth.  Without these ‘steps’ which appear to be exactly what they sound like, steep trails would become ravines and completely erode within a few years. 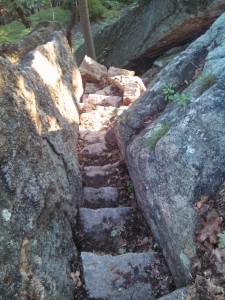 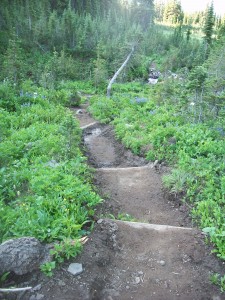 *Bonus word* Gargoyles – the ugly rocks you set on either side of a check step when there are gaps left over between the trail edges and the step.  They have to look ugly as sin so you won’t step on them – they aren’t set as well as the main rock.

Water Bar – Guess what this does?!  It keeps water off the trail!!  If you didn’t like repetition, I’m assuming you wouldn’t have chosen a hobby that involves putting one foot in front of the other for hours at a time.  Water Bars are basically reinforced drainage dips.  Instead of having a mound of dirt, there is a log, stripped of its bark and buried enough to be set, or immovable.  This redirects the water until the water has eroded the trail beneath it.  Then it becomes a fun obstacle on the trail that you get to leap over. 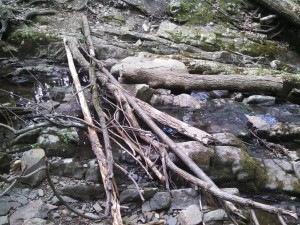 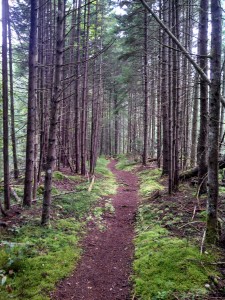 Turnpike – These are a lot of work but don’t look like it.  The unsung underdogs of the trail, turnpikes are a herculean effort to raise flat swampy sections of trail when all else has failed.  The stratified wedding cakes of the trail, they are comprised of a layer of large rocks, a layer of small rocks, a layer of crush, and several layers of hard packed earth all contained within well set logs stripped of their bark.  A good turnpike has moats to either side of it and a raised center that encourages water to flow off. 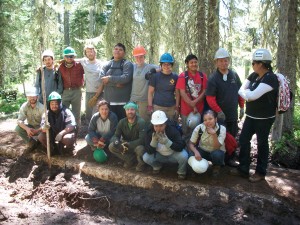 It can literally take a village to make one.

You won’t see a lot of these, but when you do, please take a moment of silence to appreciate the days of labor that went into raising the trail by a foot.  Of course if you do see one you’re probably in a swamp, so maybe just enjoy a moment of silence later behind your tent’s bug netting. 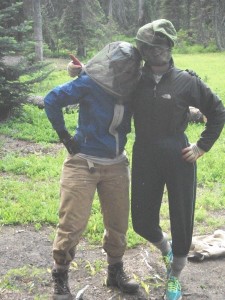 Well, those are the most common trail structures.  You’ll note a lot of other shadows of trail maintenance as you hike – the sawed off log ends, cleared brush, the ‘slough’ or organic gunk that gets removed from the upside of a trail, bog boards and bridges – but most of trail work is about not leaving a trace, or in other words, eliminating the obstacles. 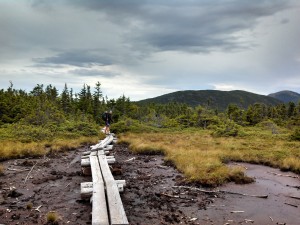 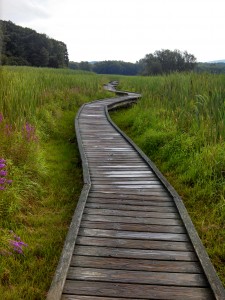 This is something to think about as you walk through the woods on a seemingly featureless stretch of trail.  Traces of trail work are like animal tracks – you don’t always see them, but you know the woods are full of life around you.  Enjoy looking for a new animal’s prints now! 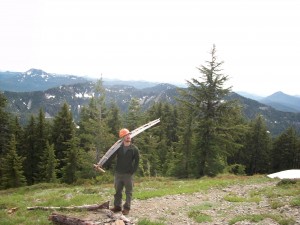