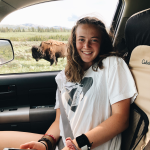 Trail Family #1 and The Best Worst Day EVER 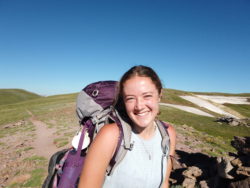 Mary and I didn’t know it on the morning of July 7th, but our hike was about to seriously change for the better. All we had to do was hike 15 miles into Leadville. Not hard, right?

It took us until 12:30 to complete 15 miles, and we stuck out our thumbs on the side of the road and quickly were picked up by a professional D.J. driving his cool camper van, who knew a bit about the Colorado Trail and wanted to help us out.

We got out at the pizza place where goldfish – who we’d met on the trail the night before – was eating pizza with some other hikers. Mary and I arrived and ordered and found ourselves at a table with Zen, Goldfish, No Worries, and a couple new hikers named Tetris and Weatherman. We all chatted and laughed about the hike so far, and ate an enormous amount of carbs: garlic bread and pizza.

Mary and I weren’t planning on staying the night in Leadville, but Tetris kept talking about her hostel and said there was two beds left in the girls dorm room. Mary and I were easily convinced and I called and snagged the two beds: $35 each at Inn the Clouds Hostel.

After pizza we walked and I got the biggest and yummiest espresso milkshake. It was a big group of us and we all weren’t staying in the same place, but we agreed to meet later up in the night to hang out.

Inn the Clouds Hostel was an amazing place with great vibes. There were clothes to put on for doing laundry (town clothes: so you can wash ALL your clothes at once), a hiker food-box for people to leave behind the stuff they don’t need, and a big ole’ kitchen with coffee always brewing. The bunk beds were cozy and incredibly comfortable. The hot water was never ending.

Mary and I did laundry, called our families, and took long showers. The whole hostel was filled with hikers and ultra-marathoners who were planning on racing in Leadville or who were hiking the Colorado Trail. 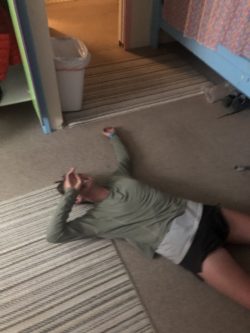 Picture: Mary resting with relief on the floor of the hostel

After my shower I walked upstairs and found everyone on the back patio socializing and drinking beers. All the people from Mountain High Pies had congregated back together and we were all laughing and telling stories from our first 8-10 days on the trail. Pinestick and Morrow showed up and joined us, and we all sat around enjoying the company of other hikers until hiker midnight (otherwise known as 9:30).

July 8th was the 10th day on the trail, and it was the worst day ever for me… and also the best.

My day started off rough when I realized I had lost my poles in town, and our shuttle was leaving in 20 minutes back to the trailhead. I ran around town back to every place from the day before but I couldn’t find my poles – my beautiful, new, expensive poles, so I gave up and ran back so I didn’t miss my ride.

In the shuttle with Mary and I were Tetris and Weatherman who had been walking together since Day 1. At first I was unsure if they wanted to stick with us, or if we should all let each other do our own things, but pretty quickly I realized that we all desire the same thing: camaraderie.

Since the beginning, Mary and I had pretty much been walking just us two, with occasional stints accompanied by Zen or Boyscout. Tetris and Weatherman had experienced the same thing, and we were all happy and relieved for new people to talk to to pass the time, and a bigger group to help with morale and variety. We all walked together, and we found out that Tetris was named Tetris on the AT because she was very meticulous with the way she packed her bag, and Weatherman was given his name the first week of the trail when we made Tetris wake up at 3 a.m. to out-walk a storm that was coming in (that same storm that Mary and I walked through with the EXTREMELY loud thunder crack).

Pretty quickly our friends Goldfish and No Worries caught up to us even though they had a later shuttle and we climbed about 10 miles before noon. Everyone had their own pace: Tetris took the climbs slow but steady, the boys ran up the hills, and I was somewhere in-between. 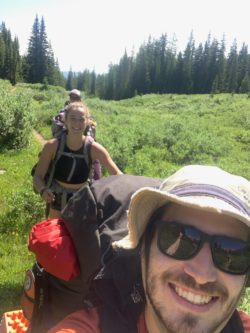 At the top of the climb just as we were descending I took a big step and immediately landed hard on my right ankle as it twisted in a bad way. Everyone saw it, and I had to limp my way for a few steps before I could walk it off, but I was a bit nervous about the damage I did. Not far after on a small step I felt my left ankle slip and rolled it mildly.

I walked that one off too.

For most of the day, Tetris, Weatherman and Goldfish had been talking about wanting to find trail names for both Mary and I. Neither of us had been named yet (despite Mary’s attempts to stick me with some BAD trail-names… I was not going to accept “chugs”). Somewhere around here a large bunch of teenagers walked past us in the opposite direction, all with matching gear. After we passed them we began a rather long discussion about what organization or group those teenagers belonged to, and I happened to throw out the one school I knew in Colorado: “I bet they are a part of the High Mountain Institute”.

A bit later we passed another group of kids with the same gear and we asked where they were from. One said, “High Mountain Institute” and I immediately exclaimed with enthusiasm, “I knew it!!!!” The next second, Goldfish threw his hands up into the air and said, “I got your trail name! Jeopardy!”

Goldfish and Weatherman gave me 5 minutes to decide whether I would accept it, and after some pondering and a bit of fear that I might get stuck with “chugs” like Mary was pushing, I accepted. From then on out I was referred to as “Jeopardy” by the gang, and that’s how I introduced myself to new hikers.

Around mile 13 we got to a trailhead and the guys wanted to walk to the reservoir that appeared not too far off the trail. Weatherman looked at the map and promised us it was only “0.2 miles off the trail” so we decided to walk off-trail on a road.

A mile later, we were still walking…

The lake was pretty far but was beautiful and cold and refreshing. I jumped in and after I came out and was drying on the rocks, I look down and saw the biggest pool of blood around my foot. Confused, I looked at the bottom of my foot and noticed I had a giant gash right on the pad of my foot: the worst place for a hiker.

That made two missing poles, two twisted ankles and a gashed foot for the day. It had been a rough day, but I kept my head up.

Luckily we were walking with a doctor: Tetris, and when she heard I had cut my foot she helped me clean it out with filtered water and bandages. When that was all settled we packed up, walked 1.2 back to the trailhead, and then walked six more miles up the steepest hill. It felt like an extremely long journey where we would never arrive.

We walked until 7 p.m. until we all found a campsite by the river. The mosquitos were so bad but we all cooked around a big tarp that someone brought and talked and laughed about all the crazy things that had happened that day, making jokes about only walking “.2”.

As we were cooking, Mary was eating and some food fell on the ground. Per usual, she picked up the food, yelled, “Leave No Trace”, wiped off the dirt, and ate it. Tetris – struck by inspiration – said, “I’ve got your trail name! It should be LNT!” (abbreviation for Leave No Trace). And so, in one day, Mary and I went from Mary and Ada to Jeopardy and LNT. And as Goldfish pointed out with excessive fervor, “Hey!!!!!! That rhymes!!!!!!”