Trail Magic – Love It or Hate It?

The Appalachian Trail Conservancy states: The term “trail magic” was coined by long-distance hikers to describe an unexpected occurrence that lifts a hiker’s spirits and inspires awe or gratitude. “Trail magic” may be as simple as being offered a candy bar by a passing hiker or spotting an elusive species of wildlife. The work of A.T. volunteers, who devote hundreds of thousands of hours to the A.T. every year to maintain and protect it, is sometimes considered the “ultimate trail magic.” 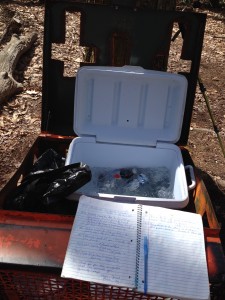 However, I have seen and heard many comments of individuals who believe Trail Magic should not be given to hikers; a view I most certainly cannot agree with. During my son and I’s hike of the Appalachian Trail last year we encountered several acts of Trail Magic, some as simple as a cooler with soda, a ride from Newfound Gap to Gatlinburg in terrible weather (in a new leather seated Merc), and people stopping us in the street to give verbal encouragement. But each act of magic was very much appreciated; I would go as far to say that some had a direct influence on the success of our hike. 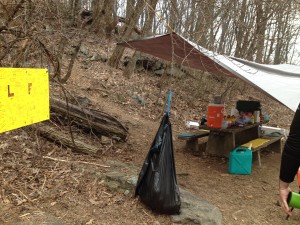 For instance, without Fresh Grounds Leap Frog Café in Woody’s Gap, I would not have made it through Georgia. His Trail Magic gave me much needed food, re-hydration and rest but just as important, I was given encouragement during a difficult time. At the same time I was afforded Trail Magic of slack packing over Blood Mountain so I could get to Mountain Crossing Outfitters and reduce my pack weight. Both acts of Trail Magic came at a time I needed them and were much appreciated.

From conversations with other hikers, we discovered that we encountered a lot less magic than others. In fact, I would find an empty cooler or miss roadside magic more than I encountered it. But when we did encounter it, it was often at the time I needed it most: Tired. Fed up. Injured and in need of assistance. Wet, cold and miserable. Or just ready to quit. 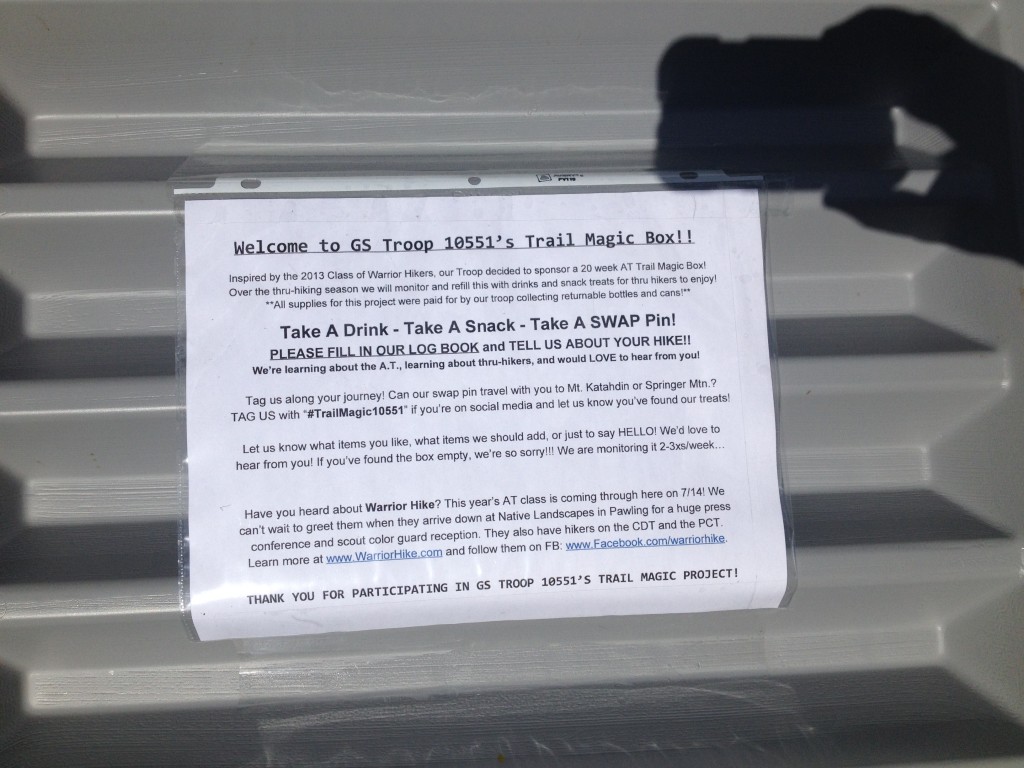 Would I of finished the trail without magic? There is a very good chance I would. Would I of had such an enjoyable and rewarding experience without it? NO. That’s for sure!

So why do some people believe that Trail Magic should not be part of the AT experience? I’ve seen several reasons:

Firstly, if you need magic to complete the trail you should not be on the trail in the first place. This is probably the only reason I see no logic in and just cannot see the justification behind the statement. Hiking the AT is a pastime, not a Special Forces selection course. However you make it from Springer to Katahdin, or reverse, is completely up to you. There are no rules which dictate pack weight, slack packing, or even direction. And therefore no rule states that you cannot accept Trail Magic; it would be a very sad day if there were.

Here are some quotes from a recent discussion on the subject on a forum post:

“have never seen anybody doin’ magic on the trail. just some shitty card tricks. the feeders oughta feed those in need. not hikers”

“trail magic just adds to the entitlement attitude that undermines the “adventure” of hiking the A.T.“

Secondly, the risk of mess and trash being left on the trail – something I never saw once. I am sure there are examples of messy Trail Magic, but my experience was always good. Being a Leave No Trace advocate I would of policed any issues at the time but really cannot recall needing to once.

Easter weekend I joined members of Greenville Outdoor Club South based out of Greenville, South Carolina on Max Patch to give Trail Magic to the Class of 2015. We had about 35 hikers pass through who were able to enjoy snacks, hot dogs and soda. For some, this was the first chance they had to receive anything outside of their packed food since entering the Smokies, certainly since Newfound Gap. It was clear by their reaction how appreciative and pleased they were. This interaction with the dreamers of this year truly helped me. 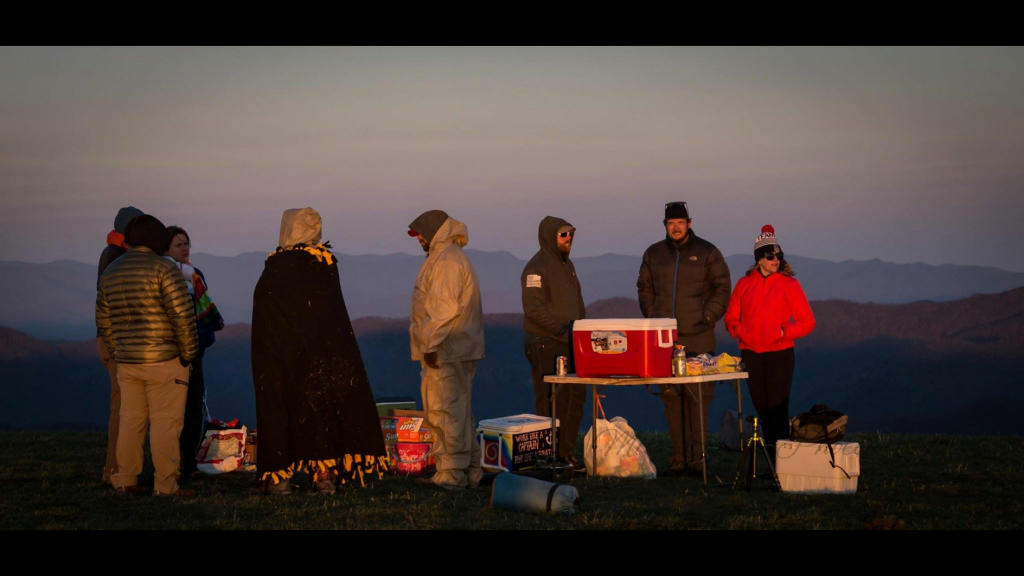 Trail Magic is not a one-way exchange that is only beneficial to the hikers. The Trail Magic on Max Patch helped me more than I could imagine, and I believe this is why people want to do Trail Magic – because it makes you feel good and fills a void that exists.

You see, post trail I have struggled to adjust back to ordinary life and longed to get back to the trail. A full-time return is not possible at the moment, so the only interaction I’ve had with the trail up until Easter weekend was hiking small portions again during the weekends of the winter months. The hikes have lacked something and haven’t fulfilled my need for the AT, which at first I didn’t understand. That was, until I did the trail magic and realized…it’s not the AT that I miss. The AT is a path, inanimate, man-made, and without emotion. Hiking it again, while enjoyable, did not fill the void I felt; why? Because it’s not just the trail I miss. It’s the community, the people, the strangers, that made you part of their community without question and judgment. It was that basic feeling of belonging to a community which, although sometimes never seen, existed and supported you along your way. The strangers that left a cooler by the trail, the maintainers that you never saw who fixed the path, the people who left little signs stating “Keep going, you are doing great” or “Keep on keeping on to Katahdin.” These people who don’t know you, and never would, but really hope you made it as far as you wanted to go.

Knowing that simple actions resulted in such positive reactions, I can see why people like to be Trail Angels or offer Trail Magic. 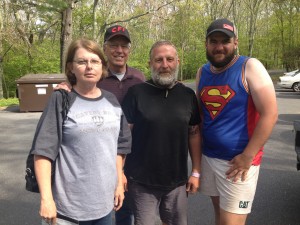 A couple give use a ride to resupply.

I remember, after about a month on the trail, overhearing my son talking with some other hikers. He was expressing his surprise, but also pleasure, in experiencing the level of humanity and support that surround the trail; how it had restored his hope in humanity and that good people did exist in the world. This was due to the interaction and actions of people who offered Trail Magic. That very moment made the trail worth the effort, as I saw a positive understanding from hiking the trail which my son had experienced.

So, the next time you receive Trail Magic, know that the person giving it is doing so for a reason: maybe they know someone hiking and want to contribute to the hike; maybe they wished they could hike and cannot but still want to be part of the experience; or maybe, like me, they are a former AT hiker and they are struggling with real life and need to talk “hiker talk” with some dreamers. Whatever the reason, Trail Magic works both ways and those giving the magic receive as much from hikers as the hikers receive from them.

For those wishing to offer Trail Magic the ATC provide a guide to help plan and execute.