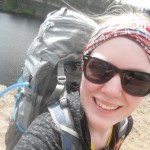 Trail Update #5: Getting Off Tropic

Story time: Once upon a time on the AT a few weeks ago, a friend (Tin Cup) ended up with a water leak in his pack. At the shelter that night, a sage and wise hiker (Bam-Bam) told him, “You need these little trials to remind you that you aren’t in control out here!”

Bam-Bam knows his stuff. He hiked the entire AT in 2001 and is getting ready for a PCT hike. The past two weeks have been a lesson in being out of control, and it’s a little painful.

Let’s examine the weather. When I last posted, the rain poured in Erwin, TN as Gandalf, Couscous, Grapenut, and I talked about plans for the next day. Couscous mentioned the possibility of camping in a mountaintop forest – he was jazzed on the idea of putting up his hammock in the forest!

The temperature dipped low enough to produce more snow at >4000′. Mother Nature didn’t care that I was mentally done hiking in snow a few weeks ago. Rude.

Gandalf and I left town one day before Grapenut and Couscous. Hint: be clever like them and do work-for-stay to save moolah! We parted ways with plans to meet up down the trail, knowing fully that they would catch up to us.

Walking in a Winter Wonderland

The hike out of Erwin was generally uphill, but less exhausting than I anticipated. Along the way, the skies cleared but the temperatures stayed cool. I hiked in a fleece pullover all day and stayed comfortable. 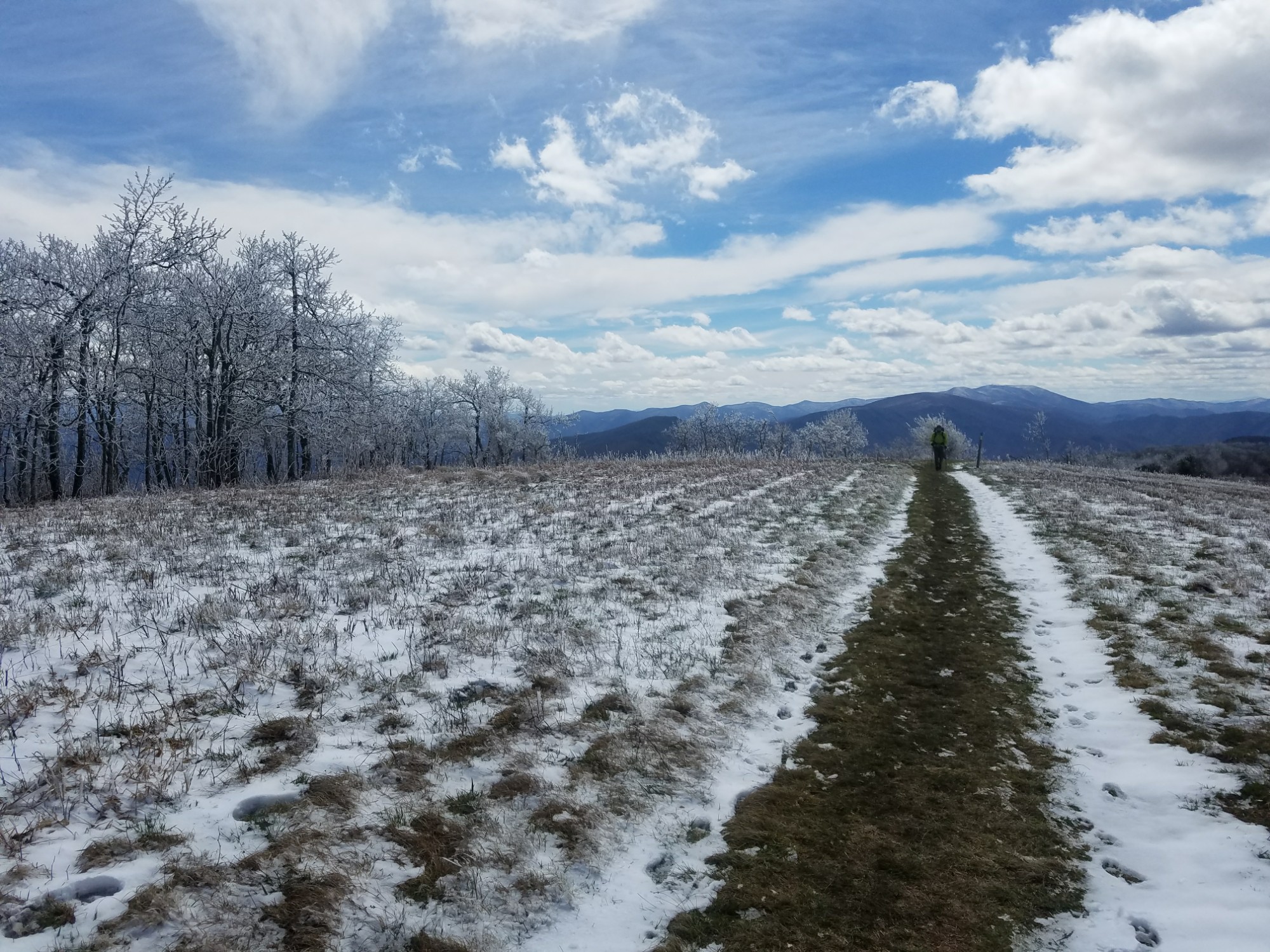 We walked through the appropriately named ‘dense spruce forest’ on top of Unaka Mountain. It was picturesque, windless, full of snow, and cold. 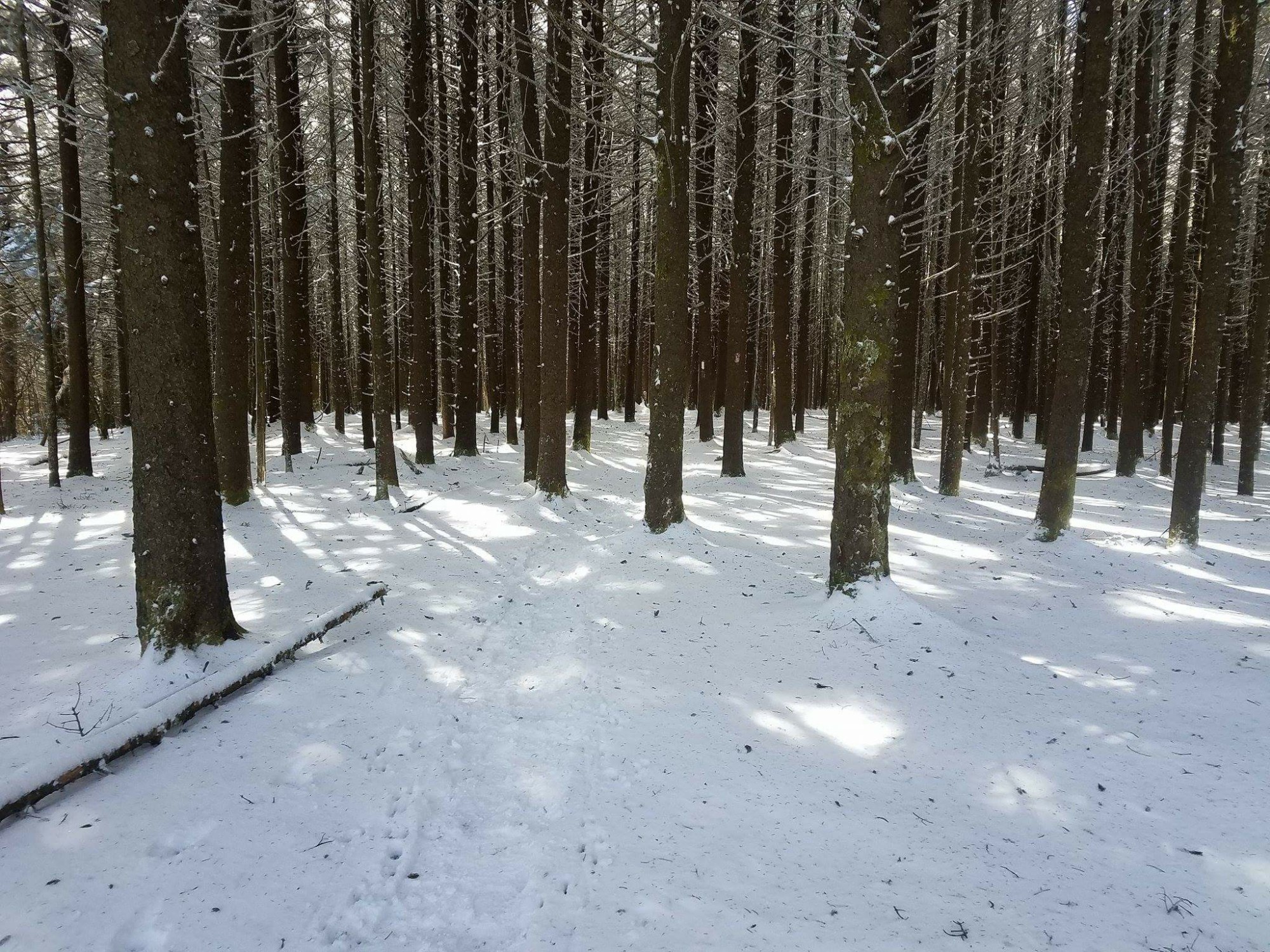 I imagine the hammock offerings here are quite good, but not so much for tents 🙂 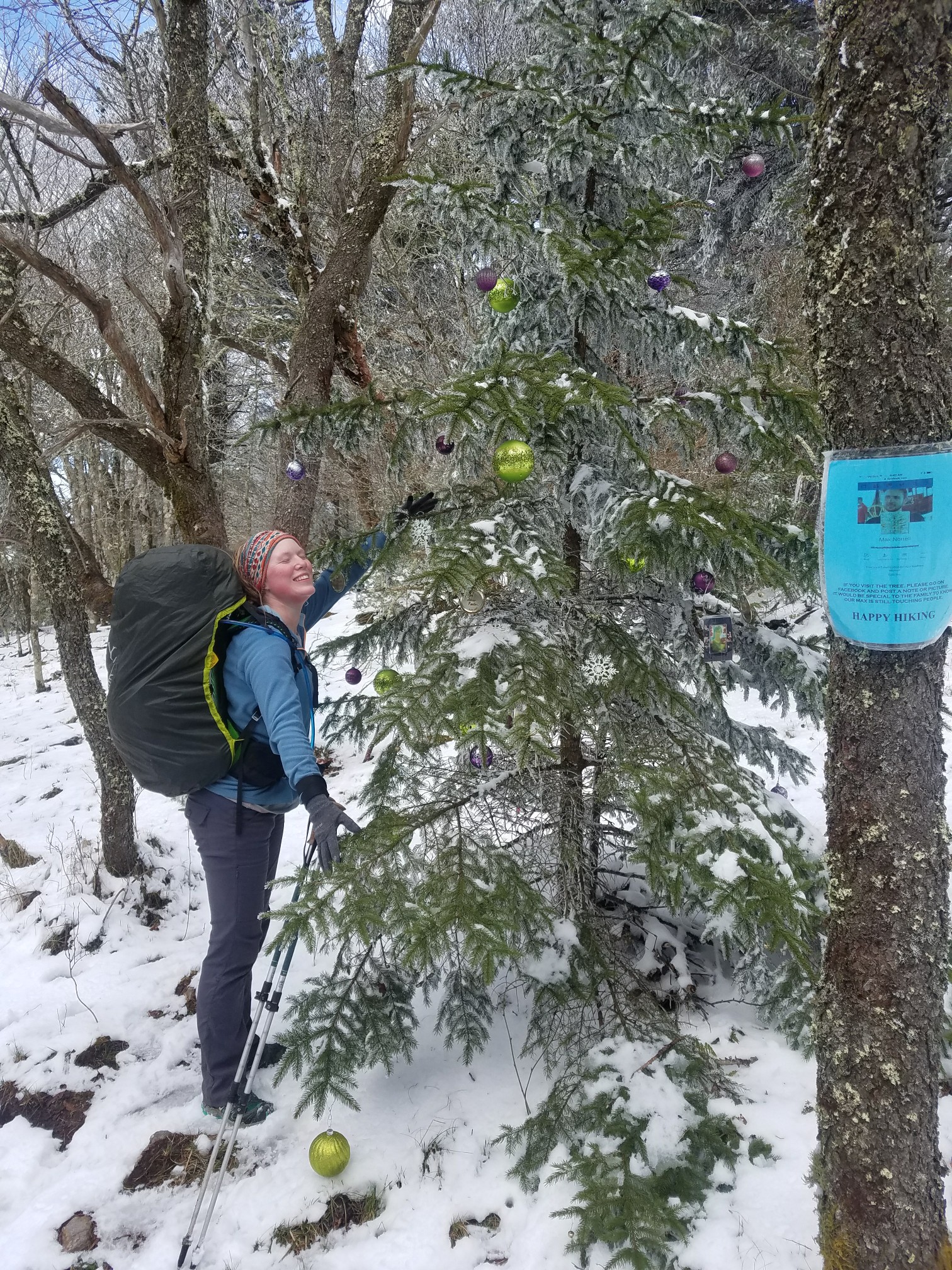 The Cherry Gap shelter was very busy and tons of tents were pitched on the ridge. Everyone settled down for what proved to be another sub-freezing night. With wind. Pro tip: eating 1300 calories worth of Cracker Barrel macaroni and cheese before bed will help keep you warm.

The morning came, the wind persisted, and my hands were numb (again). Gandalf was capital-G grumpy because of the cold. At lunchtime, it started to get a little less chilly. The trek up Roan Mountain turned warm enough that I was able to hike in just a t-shirt. 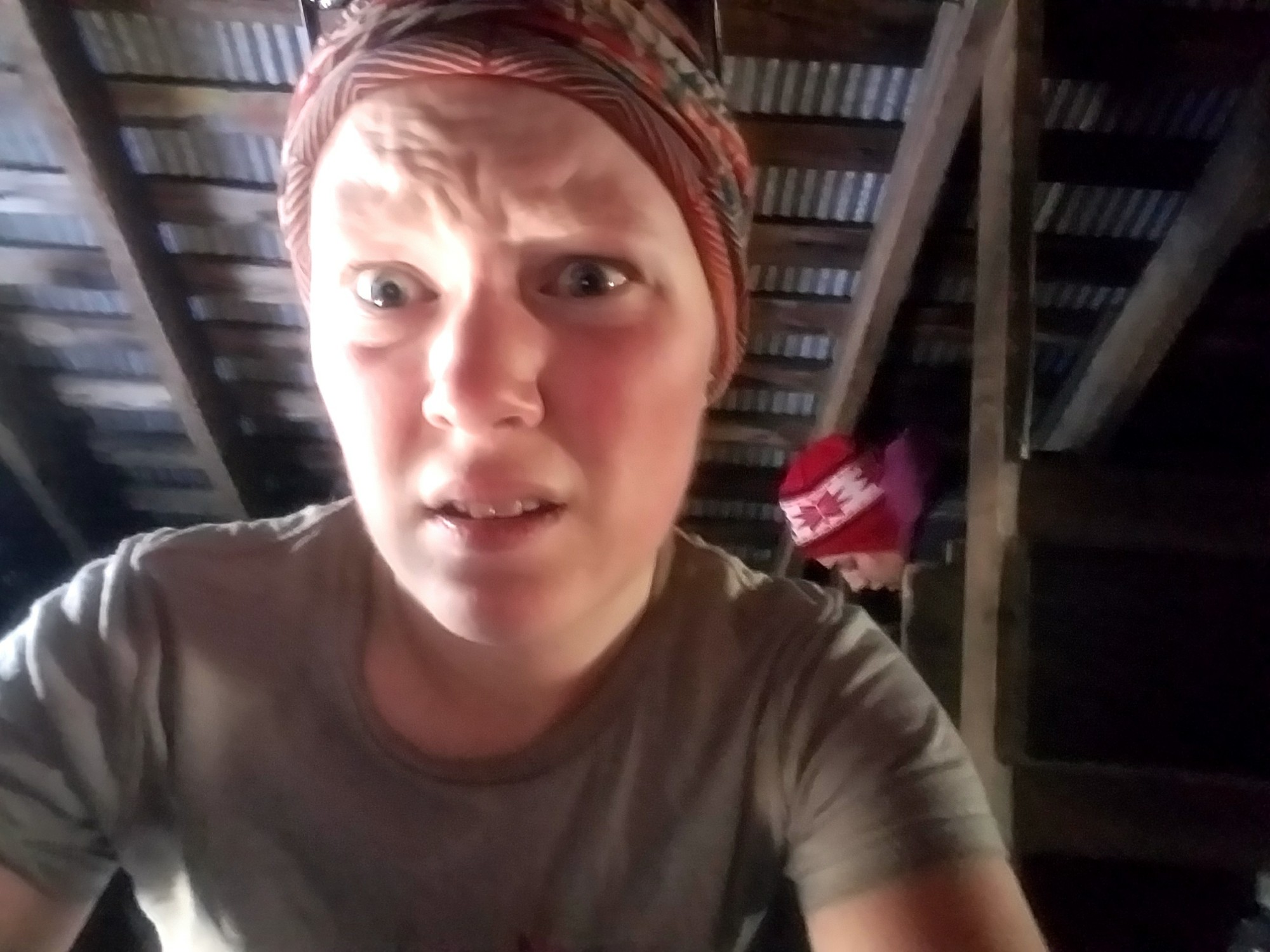 Does anyone else get the creeps at the Roan High Knob shelter?

Remember back when I said the weather was supposed to get good on the way to Damascus? I think that is about the time that it all started to fall apart.

After a brisk night at 6100′, I made an acquaintance. Initially, it was delightful. Then things got intense…this new acquaintance became an nuisance. I felt uncomfortable with the whole situation. I just wasn’t ready for things to move so quickly.

Plot twist – it was the sun. Queue the ominous music now.

Putting In Those Hours

Gandalf and I knew that Grapenut and Couscous would be on our tails. We decided to make them work hard in order to catch us! We put in several 20-23 mile days. We hiked at dawn, we hiked at dusk, we hiked at night. We hiked 100 miles in just over 5 days. 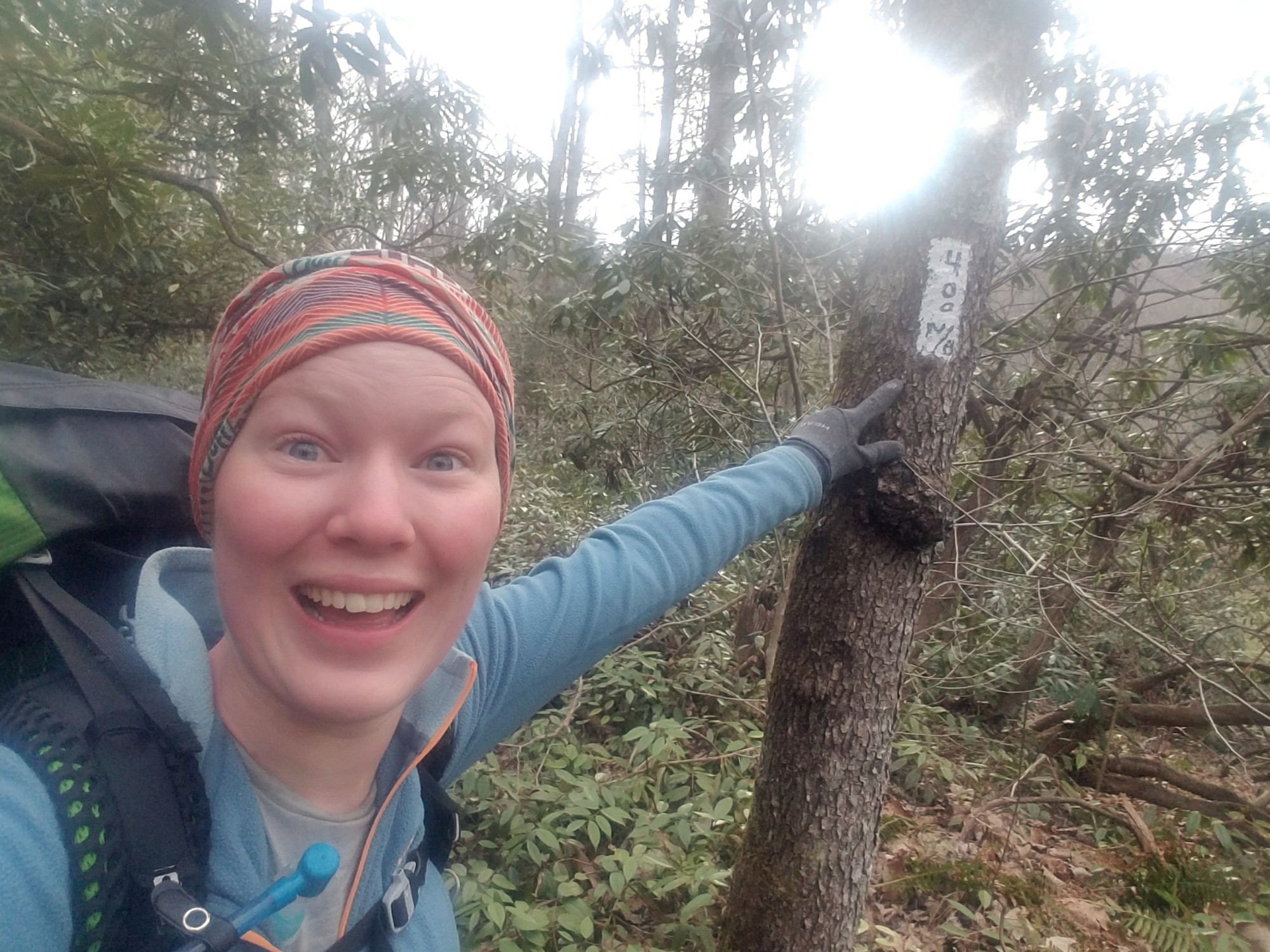 We tried to avoid hiking in the heat of the day. By the second day of ‘good’ weather (and basically every subsequent day), I was sweating buckets and feeling faint. I knew it was 85-90 degrees. Except it wasn’t…not even remotely close. Because the weather app on my phone said 71 degrees. Poo.

I couldn’t find enough shade, apply enough sunscreen, or drink enough water. Folks, I am a naturally pink person. I use SPF 50 at least. If I think about sunshine too much, I burn. Tanning doesn’t happen for my fair skin.

When I actually get hot, I go from pink to lobster-red. Strangers get all concerned and point out my coloring and ask “are you too hot?” Yes. The answer is always yes. And there isn’t a darn thing I can do to change that.

It is feast-or-famine out here, people. Five days ago, I had to move at all times to prevent shivering. Now, I desperately avoid movement because that makes the sweating worse. 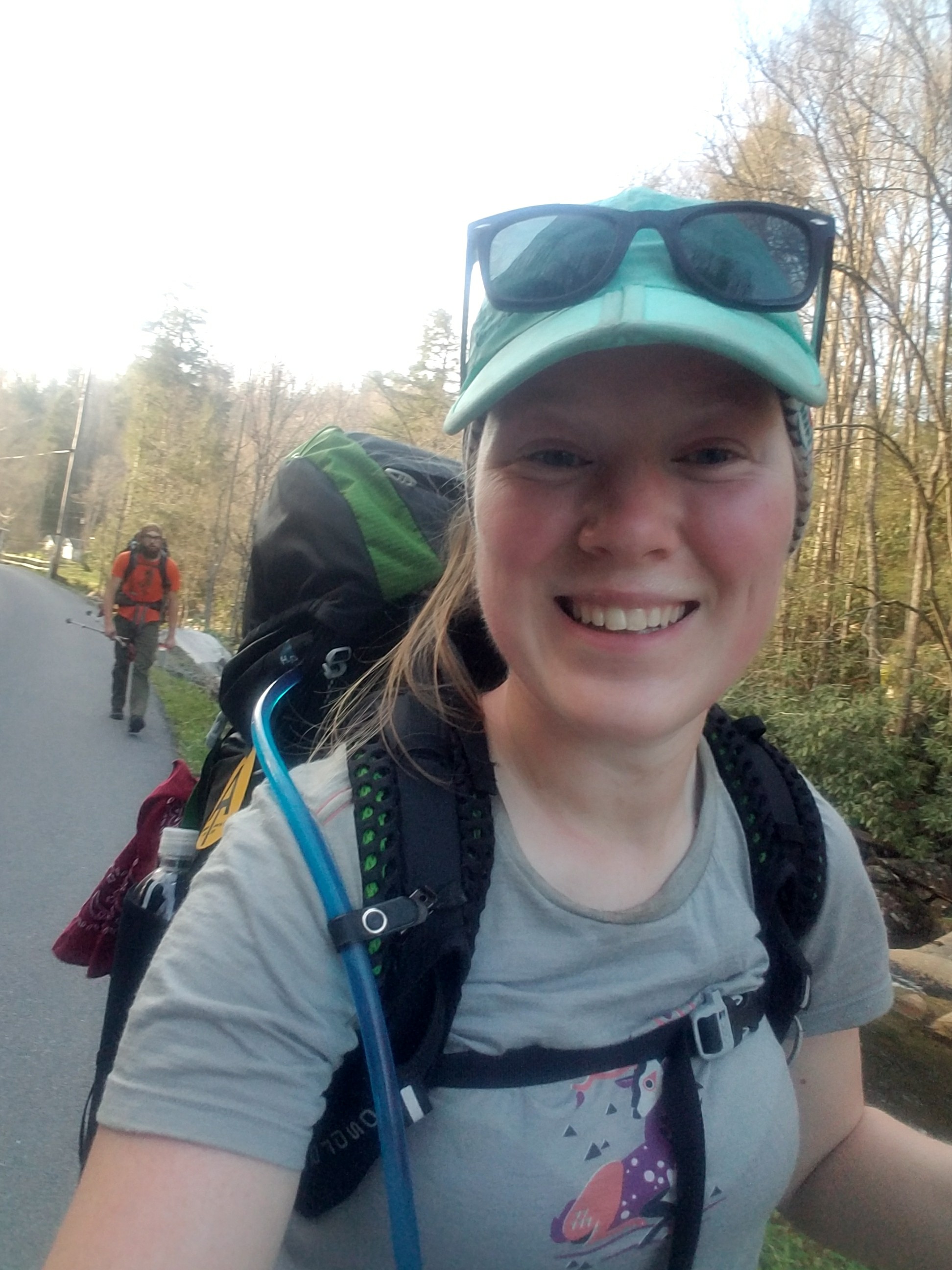 No, my face isn’t sunburnt (but my arms and neck weren’t so lucky)

Sometime in Tennessee, my lungs started doing this thing where they didn’t want to breathe. If I was walking uphill, even slightly, I felt like a fish out of water. It scared me, and it scared Gandalf. We slowed down, took extra breaks, and drank as much water as possible. None of it made much of a difference. To make matters worse, Gandalf and I weren’t getting any quality sleep.

On the way to the Vandeventer Shelter, I cried out, “Why do we always have to do the hard thing? Why is it always an uphill battle?” Gandalf remained characteristically stoic, never really letting on if he was having any difficulty. On the last mile to the shelter, I sobbed from exhaustion and discovered a new bodily phenomenon which I call ‘noodle legs.’ It was ugly. 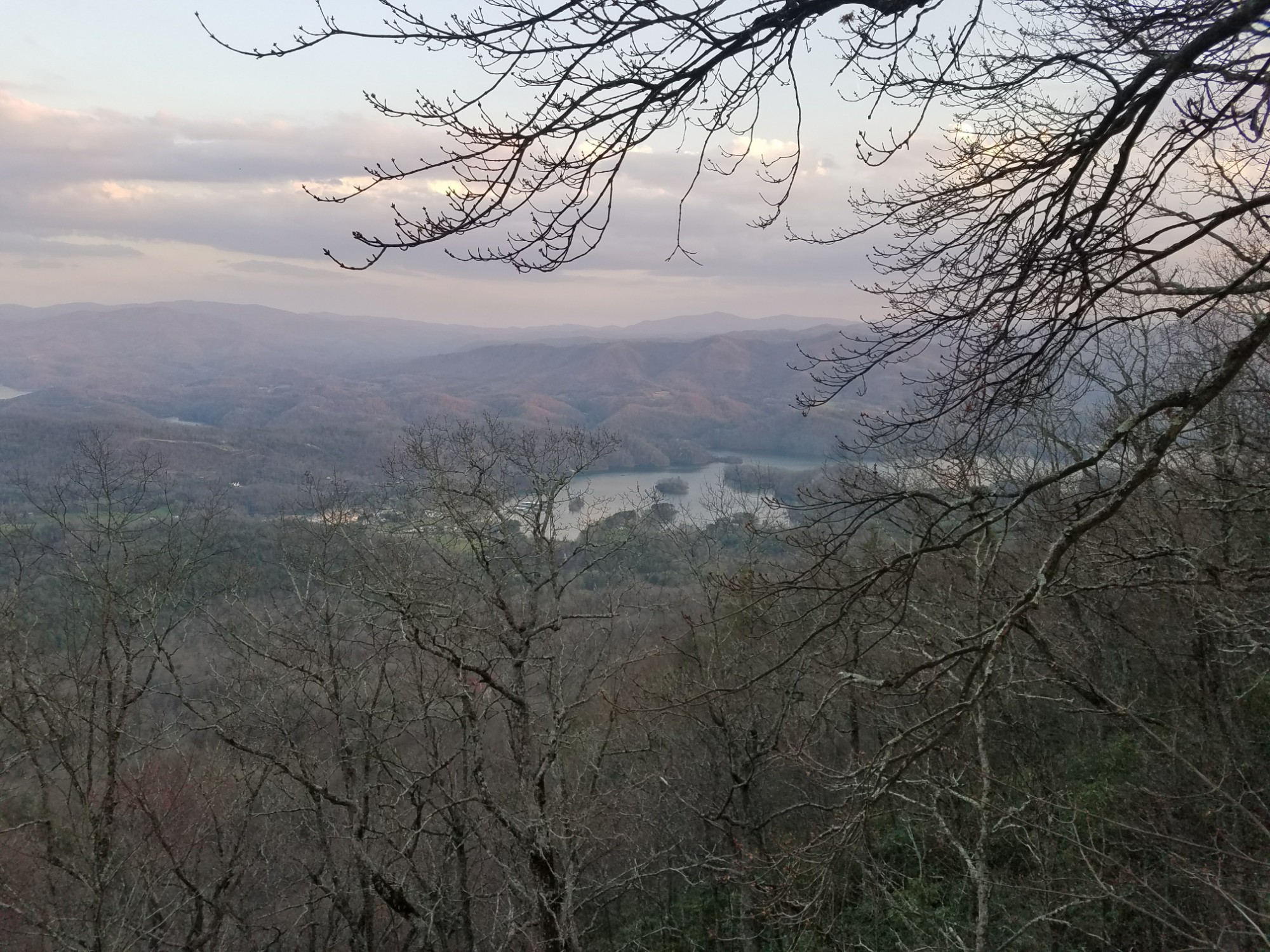 The view from Vandeventer Shelter

I slept as solidly as I could. I woke up refreshed and ready for the day. During a snack break, Gandalf told me how hot, tired, lonely, and homesick he was. He told me how much it hurt him to see me fall so often, gasp for air, and struggle with the fit of my pack.

He reminded me that life didn’t have to be so hard. We laughed and cried about everything. On a beautiful day in Tennessee, we made the hard decision to ‘hit the easy button’ and get off trail.

It Doesn’t Work That Way

No aspiring thru-hiker intends to voluntarily go off trail before summiting Katahdin. It sounds like an impossible decision to make. It wasn’t. It didn’t feel wrong. It felt peaceful. My mood improved, but my mental stamina went down the toilet. The cumulative aches and pains of six weeks crashed on me like a ton of bricks. My feet were ready to retire. 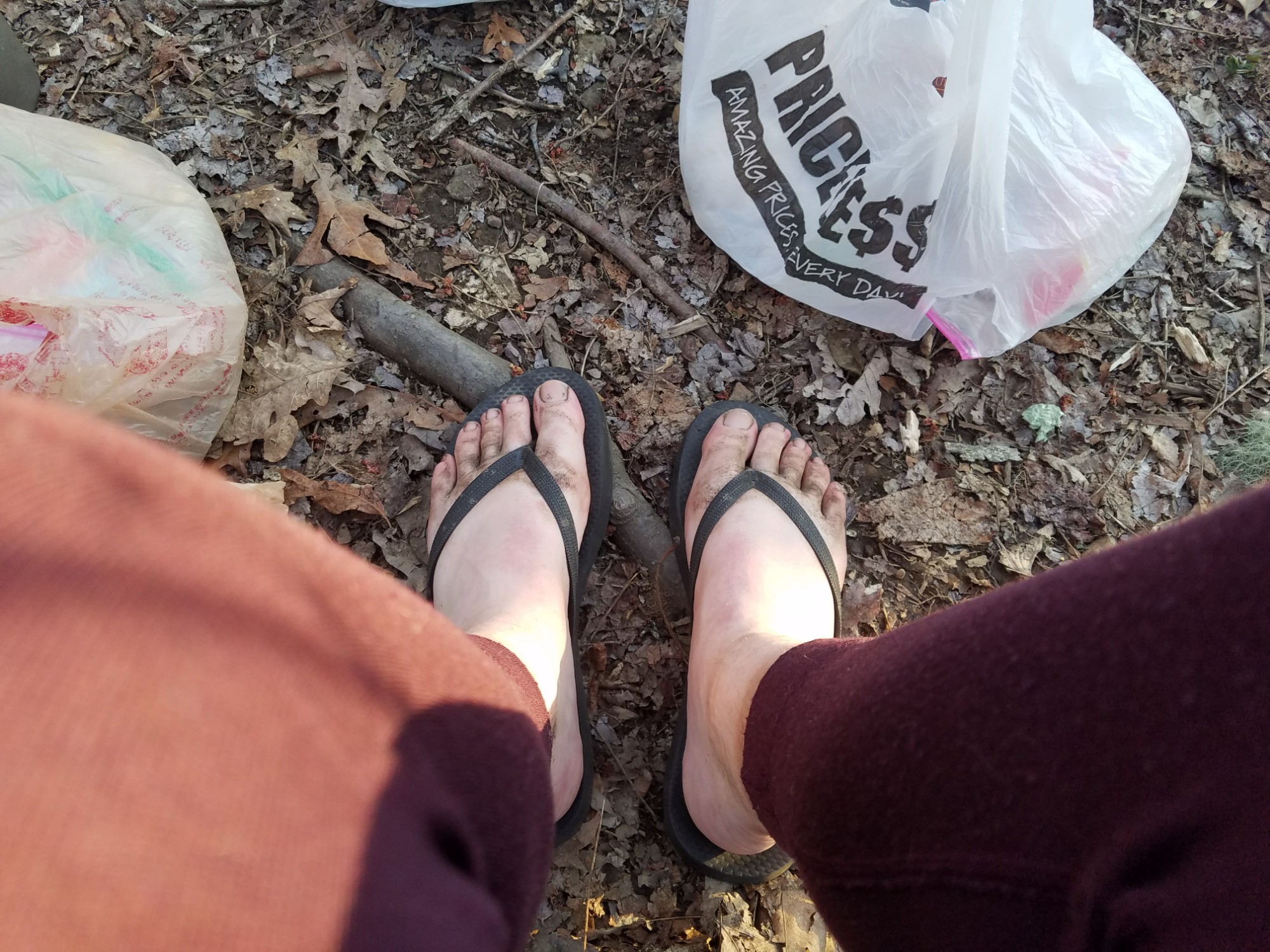 My ticket out of the woods

The funny thing about deciding to get off trail while sitting on a log near mile ~440 is that you are in the middle of the woods and town is 30 miles away. None of the roads are well-traveled, so hitching is out. My feet had to come out of their (brief) retirement.

At Least the Terrain is Good…

I heard so much about the trail into Damascus. Rumors include: “it’s flat!” “it’s easy!” “there are no big climbs!” These statements are relative. Were the last 30 miles easy? NO! None of the miles are easy. Were they easier than others? Sure, but that doesn’t make much of a difference when your body doesn’t want to be walking. 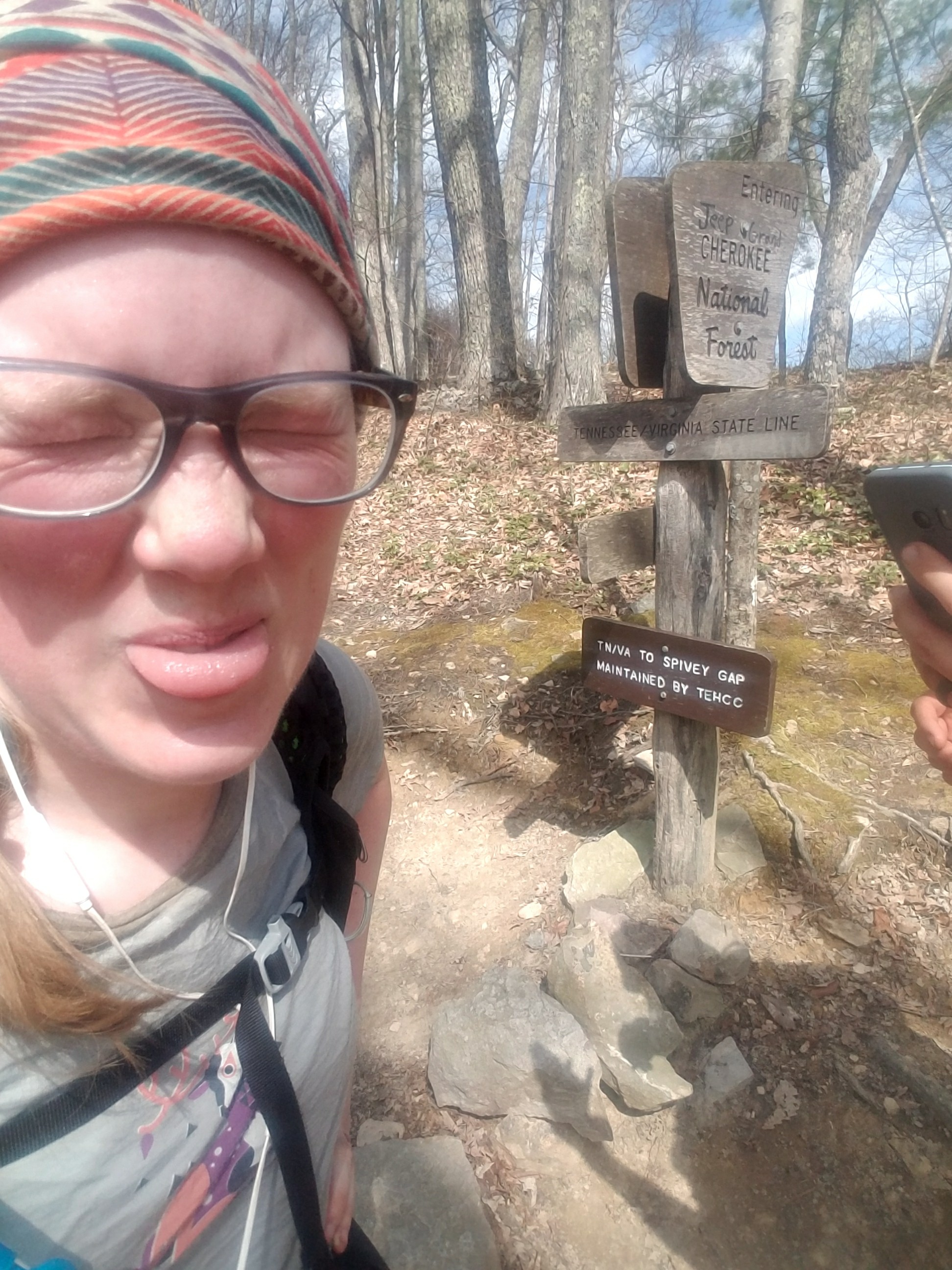 Sticking that tongue out at Tennessee!

Gandalf and I hoofed into Damascus, VA with a strange mixture of exhaustion, accomplishment, contentment, and sadness. Note: crossing state lines is still a happy and unbelievable moment! 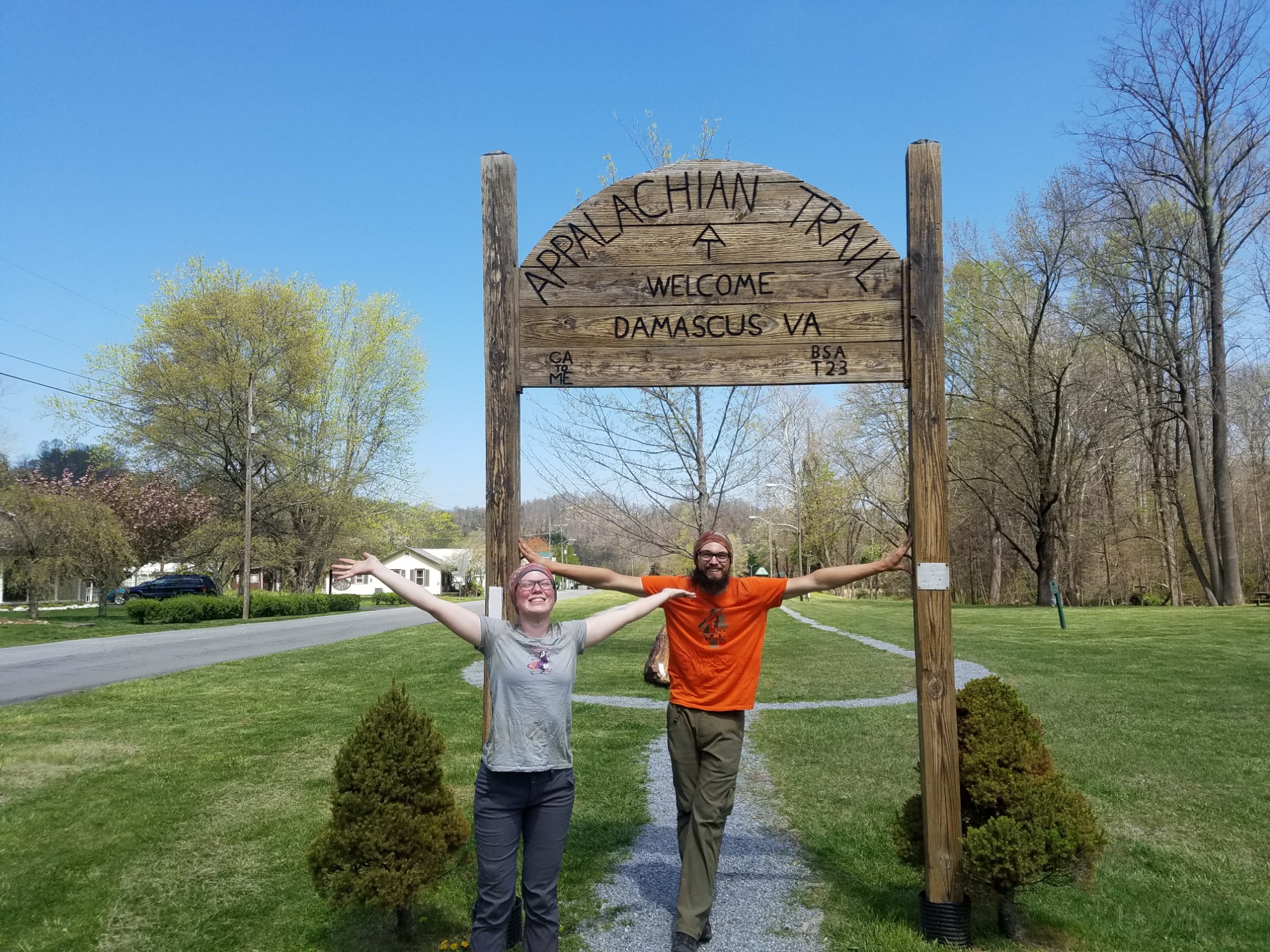 Three hours after we got to Damascus, Grapenut and Couscous caught up to us. They had been trailing us by less than half a day ever since Erwin! We broke the news to them and it broke my heart. After initial shock, they had nothing but genuine support for us.Why can’t hikers just be sucky lousy people? No one ever feels sad about leaving sucky lousy people. 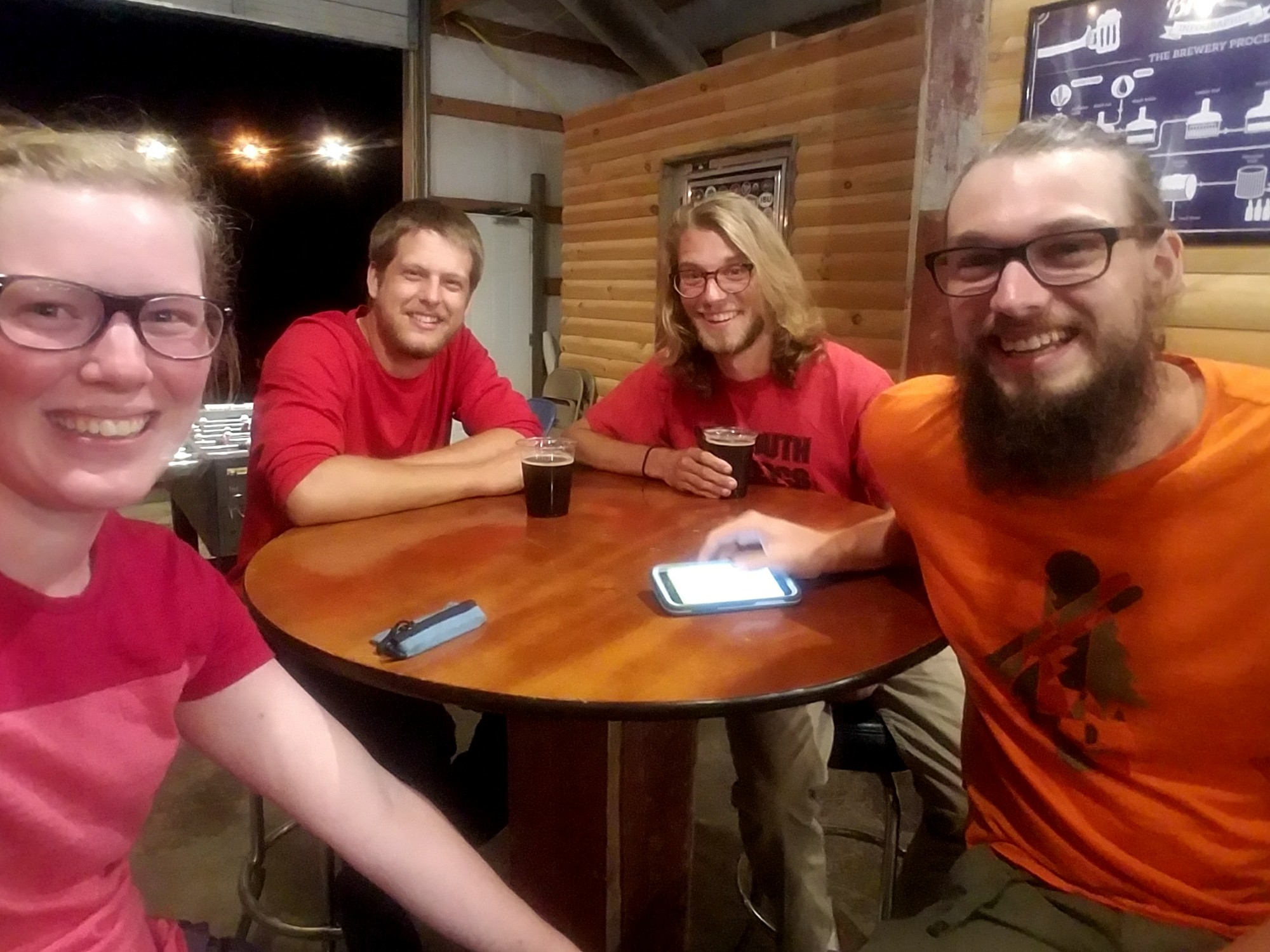 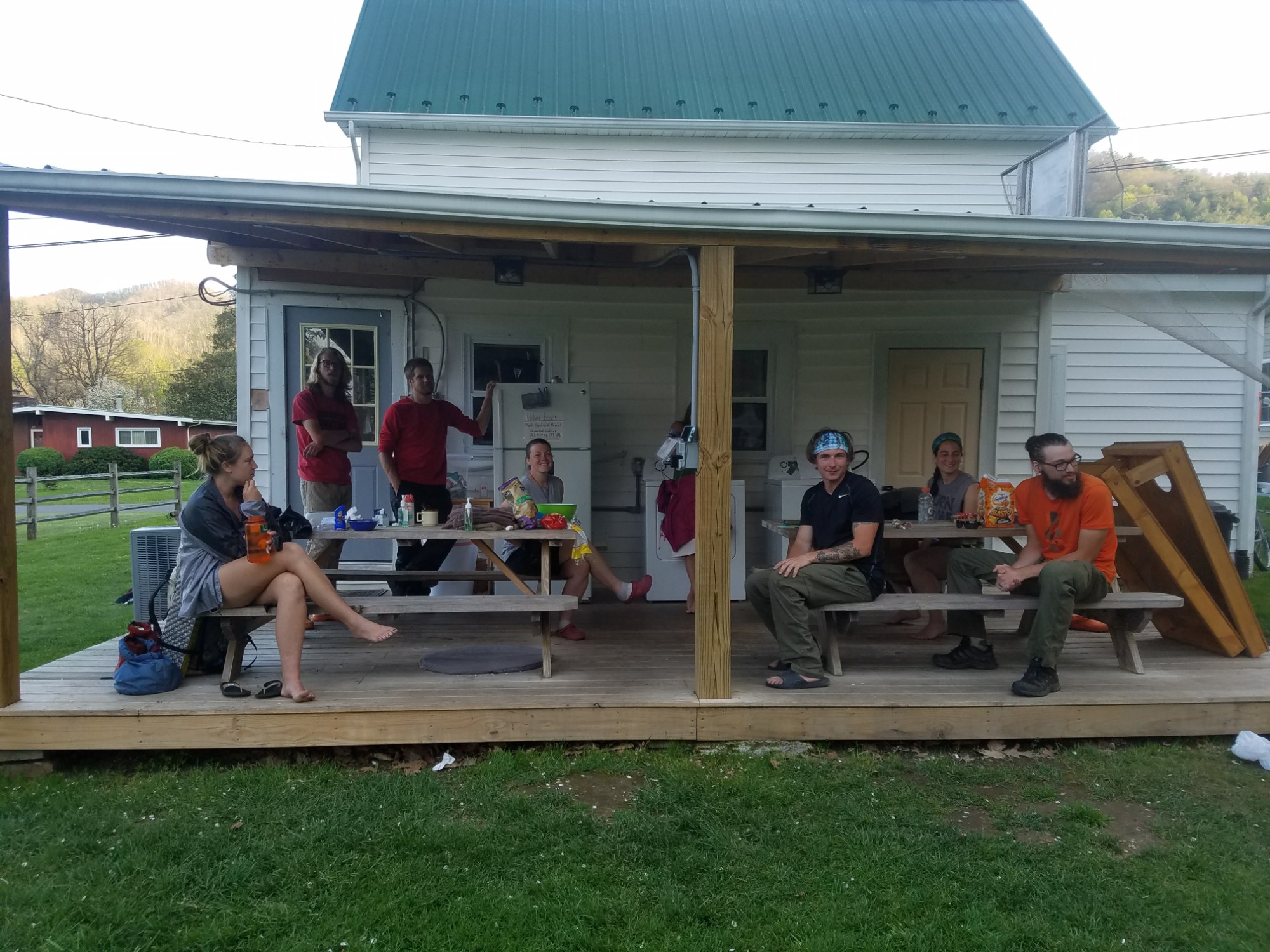 These people are awesome!

News got around fairly quickly. Mostly, other hikers were curious about our plans going forward. Will we section hike? Eh….maybe. Will we go home? Not right away. Well, then what will you do? Most likely, a cruise. Perhaps somewhere tropical (I can pack more sunscreen when I don’t have to carry it on my back). Eat. Sleep. Miss our trail family. Support them however we can. Keep adventuring. 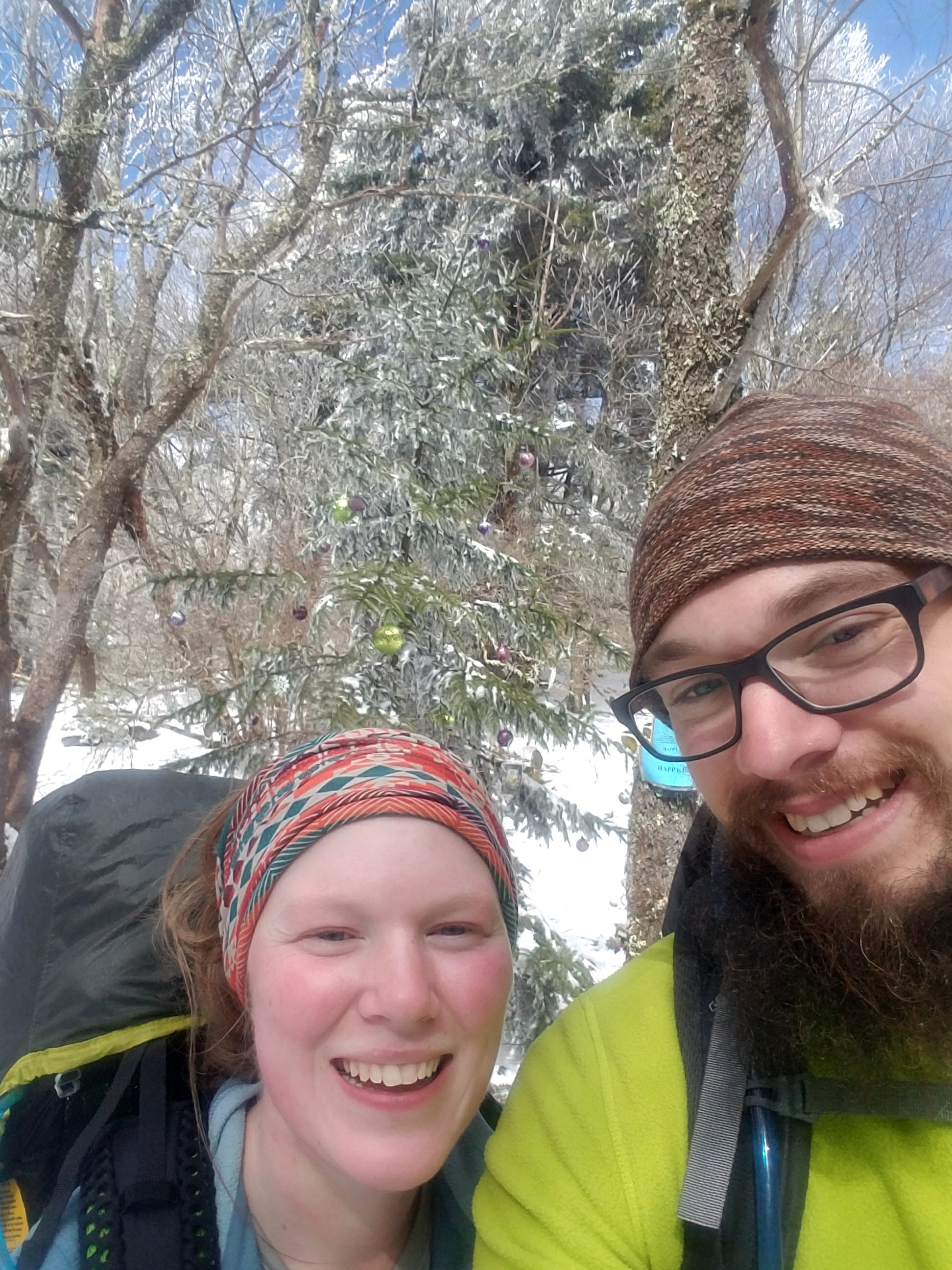 This is just the beginning!

Hey howdy! My husband and I will be starting our NOBO thru attempt in March of 2017. At present, I live in Washington state and I work as an occupational therapist. I am a lover of documentaries, peppermint everything, my sweet dog, and early bedtimes. Louise (our dog) is such a joy, but she won't be coming along with us. My wanderlust is the product of being raised in the military; I don't think I will ever see enough places or meet enough people. My husband had the hare-brained idea to hike the Appalachian Trail...I took that idea and ran with it. Follow along with our adventure! Happy hiking!