I had made it near the end of Segment Six, and Legs was meeting me with the camper for a resupply and rest at the trailhead. I was about four miles out when up ahead, I saw a HUGE dog trotting toward me. “FLYNN BOY! COME HERE!” I shouted about 40 feet down the trail. I could see his dopey face as he realized it was me coming out of the woods toward him. Flynn, our Great Dane, has a knack for running full sprint at a person and dodging at the last second, much to our amusement at the dog park; that is not what happened here. Flynn barreled right into me, nearly knocking me over. “Aww mister, I missed you too!” I cooed. Thru wasn’t far behind and promptly jumped into my lap as I lowered down to her. 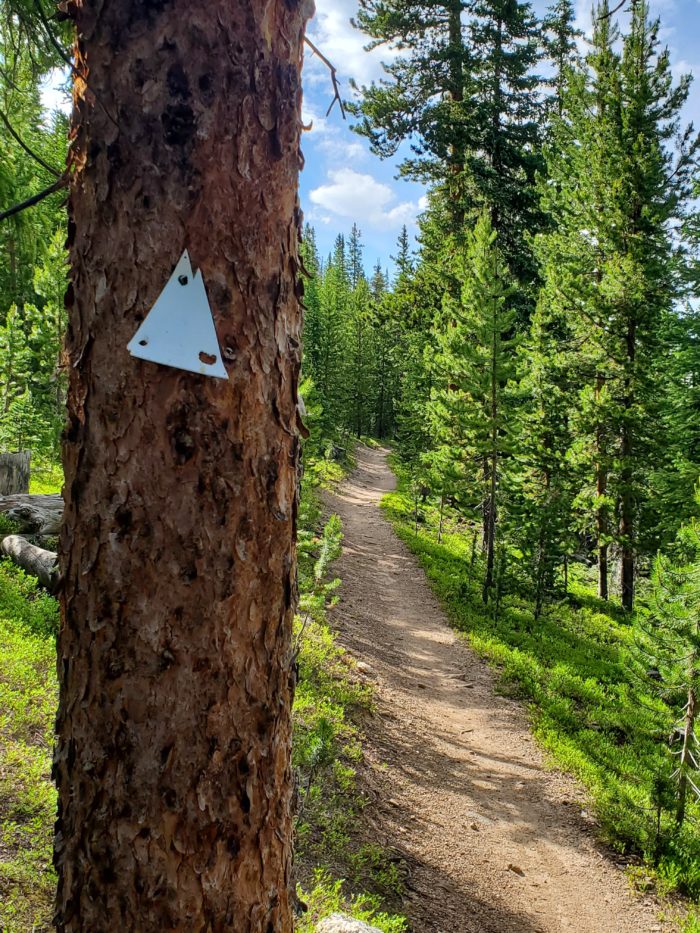 As Legs and I started hiking back with the pups, we ran into two hikers and their black lab. We exchanged some small talk as the dogs all formed a circle of butt-sniffing. “You know why they do that, right?” The man asked. “Sniff butts??” I asked. “Yeah! A long time ago when humans and their dogs were dancing around the fire, the dogs decided to try and dance like the humans. They got up on their back paws and bounced around, upright. Then, to be even more like us, they decided to take off their tails and leave them by the fire. After the dancing was all done, the humans hurried off to bed. The dogs were in such a rush, they grabbed whatever tail they could. Now they sniff each other’s tails in search of their own.” I tried to imagine Thru with Flynn’s tail. Or even funnier was Flynn with Thru’s. Either way, it was a perfect middle-of-the-woods story.

I had done my research about the larger climbs (those above 12,000 feet or so) and I wanted to adopt the rule most people use when climbing 14ers, which is to be off the summit by noon before the afternoon storms. I had been trapped on a ridge in a terrible storm slackpacking in the White Mountains and had no desire to ever go through that again, much less without a partner. I knew that I was already too far away from the summit of the climb to make it before noon, but I had heard only very sparse thunder and decided to hike until tree line and reevaluate then.

It was around 2 and I decided to risk it; there had been no thunder for 20 minutes and the sun was even starting to come out. But, I knew that in the four miles it would take me to reach treeline again the weather could drastically change on the ridge. Thankfully, the only unexpected visitor I had on the ridge wasn’t a storm; it was a family of marmots that were looking at me quizzically as if to say, “Wait… what are YOU doing up here?” One seemed to pose for me, overlooking their mountains and the human kingdom below.

During this segment, I finally felt strong. I had been holding back my miles for a few days at the beginning to avoid injury, but now I could feel my legs were OK. I finally adjusting to thru-hiking again. One of the main reasons I enjoy hiking solo is because I get self-conscious about all of the breaks I take, especially going uphill. It’s one of the main reasons I was OK hiking with Legs; he would power up the climbs and wait for me at the top. Then I could match his pace going downhill or when the trail was flat. Now, on the CT, I was finally taking fewer breaks and feeling the muscular endurance I was developing in my legs.

Of course, being on trail for more than a couple of days comes with some trade-offs. My toes were bright pink and swollen, the bottoms of my feet screaming after 20 miles. Something I hadn’t expected from the trail was the exposure to the sun, and I had a gnarly heat rash to prove it. The backs of both of my calves and the sides of my thighs were covered with red, swollen lumps and I could feel the skin on the back of my neck beginning to peel from sunburn. Despite the physical effects of being on trail all day, I still couldn’t have been happier every night when I laid down and wiggled my pack under my knees. The feeling of sticking to a routine and having a very straightforward goal for each day has given me a type of fulfillment I can’t find anywhere else.

This segment I got to slackpack, which means hiking without a full pack and usually requires a shuttle. I really needed a break from the incessant sun, and the trailhead locations made it easy for Legs to shuttle me. Because it was relatively low miles for a full day of hiking, I decided to take Thru with me. In the morning when Legs dropped us off, he gave us each a kiss and went on his way to run some errands. It took me about 30 seconds to realize I had let him leave without first filling my bottle with potable water; now I would have to filter.

Filtering water isn’t a problem. It’s the bugs that get you while you’re stopped that are the real annoyances. On the AT, Legs and I had mastered our technique of filtering water that resulted in the fewest bites. Legs would take both of our packs and run up trail about a quarter mile while I stayed at the source to fill up our Sawyer bags. Then I would run to catch up and we could filter farther away from the water where, theoretically, there are fewer bugs. This time it wasn’t Legs rushing me ahead, it was Thru spinning in circles, biting at the air filled with mosquitoes around her and softly “awoo-ing” in my direction as if to say, “OK Mom, let’s GO!”

When we got to our first snow crossing on the ridge, Thru was confused. I threw a soft snowball at her and it exploded across her snout. She then realized what it was and gleefully rolled on her back, wiggling in excitement. She handled the 13 miles well, and gobbled up her half of a meatball sub Legs had packed for lunch quicker than I had ever seen her eat anything before.