Travis Kauffman spoke publicly for the first time since his life-and-death encounter with a mountain lion in Colorado, describing in vivid detail how he wrestled with the cat before killing it.

Kauffman, with scars from the attack visible on his face and neck, spoke Thursday, Feb. 14, about trying to scare off the mountain lion before it lunged, then tumbling down a hill with the cat’s teeth locked onto his wrist. He stabbed it with sticks, repeatedly struck it on the head with a rock, and finally got on top of the cat and suffocated it.

His girlfriend, Annie Bierbower, sat by his side during the nearly hourlong press conference in Fort Collins organized by Colorado Parks and Wildlife.

Kauffman, 31, a resident of Fort Collins, said he began his trail run on Feb. 4 in Lorrey State Park, heading out for an anticipated 12-15 miles. About a quarter mile after taking a spur off the West Ridge Trail, he heard pine needles rustling. When he turned to look, he saw the juvenile mountain lion about ten feet away and felt his “heart sink into stomach.” 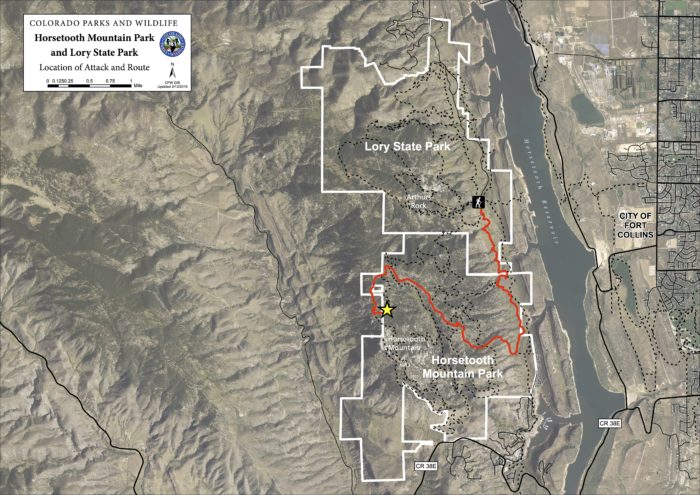 Kauffman began yelling and threw his hands into the air to appear as large as possible, but the cat continued approaching. It lunged forward and latched onto Kauffman’s right wrist, clawing his face and legs. “I was screaming the whole time,” Kauffman said. “As I tried to throw it off of me, we both left the trail tumbled off the slope to the south side of the trail.”

From there, Kauffman, who is five feet, ten inches, and 155 pounds,  said it was essentially a wrestling match. With his wrist still locked in the cat’s jaws, Kauffman was able to get his left knee to pin down the cat’s back legs. In the moment, Kauffman was able to recognize that getting a cat onto its back allows the hind legs to “go crazy,” and he was able to consider the subsequent potential for a tear to his own gut or groin. Kauffman grabbed at sticks, attempting to stab the lion in the throat. He was able to grasp onto a large rock with his left hand and get several blows to the back of the lion’s head. 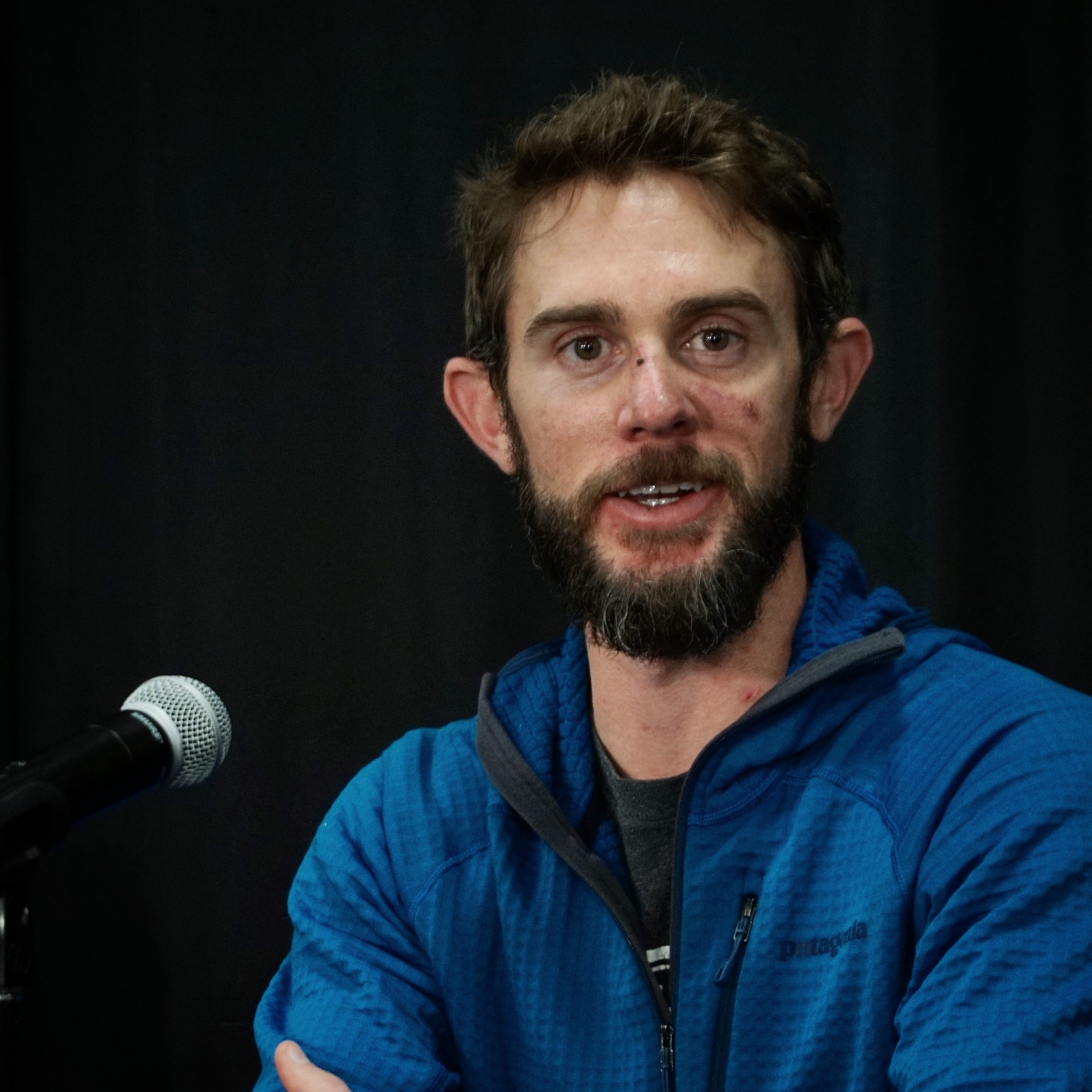 Using what he described as “bodyweight transition,” Kauffman threw his right leg onto the cat’s neck and stepped down, eventually suffocating the cat. Kauffman then ran back to the trail junction and headed down the north side of the trail system for three miles, toward a different trailhead from where he had started.

The run back was worrisome, he said. “The potential for ambush (by another mountain lion) was very much on my mind.”

He encountered another trail runner who accompanied him back to the trailhead. Kauffman was driven to the hospital, where he received more than 20 stitches for his cuts.

Kauffman began the press conference by asking, “Who is disappointed I’m not Chuck Norris?”

After laughter from the audience, he continued by thanking the medical workers at the hospital where he was treated.

He said that at one point during his struggle with the lion, “I didn’t think I was going to come out of it.”

“Luckily,” he continued, “I am able to spend Valentine’s Day with my girlfriend.”

Bierbower was asked if she was concerned about Kauffman receiving email marriage proposals or requests for dates.

“Nope, he won’t. Because I’ll be taking him on some dates,” she said to laughter.

Kauffman said he’ll continue to run on trails, but with a buddy, and might consider carrying a knife.

Would he write a book? he was asked.

“It’d probably be a pamphlet,” he replied to laughter. “It’s not very long.”

As for all the attention since the attack, Kauffman said, “It is weird… Weird to get fame that’s not earned.”

One of the last questions, the only one that seemed to give Kauffman pause, was what he had learned about himself.

“Oh, man,” he replied. “That’s the toughest question of the day.”

He’s a calm person, he said, and staying calm during a scary situation is probably what saved him.

Necropsy findings from Colorado Parks and Wildlife are consistent with Kauffman’s descriptions of the events. The mountain lion was estimated to be approximately 4-5 months old, and the weight at necropsy was 24 pounds, although estimated weight prior to scavenging was likely 35-40 pounds. The mountain lion was likely male, and necropsy findings included “blunt trauma to the head and petechial hemorrhages in the region of the larynx and trachea.”

Two juvenile lions that wildlife officials consider siblings to the one that attacked Kauffman were trapped and taken to rehabilitation facilities, and will eventually be released to the wild again.

Kauffman has no prior wrestling or martial arts experience, and has stated regret and sadness that the outcome of the incident ended with the death of the mountain lion. 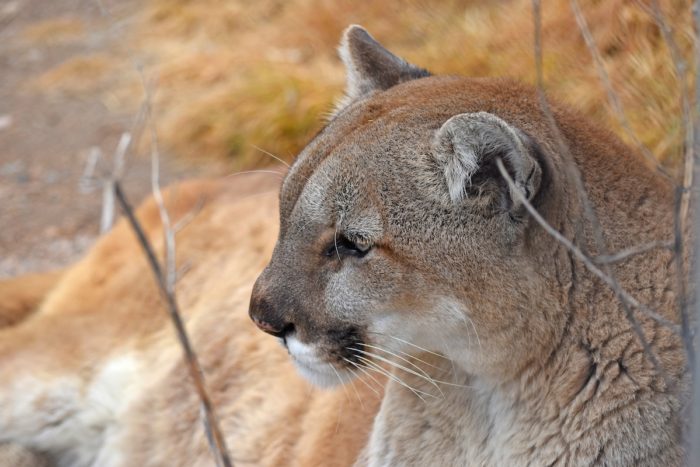 Mountain lion attacks are exceedingly rare, and the fact that this mountain lion attacked a human is likely indicative of the age and inexperience of the animal. Only 27 fatalities have been documented in North America, and just two in Colorado, over the last 100 years.

In the scenario that you cross paths with a cougar, under no circumstances should you turn your back and run, as this may trigger the cat’s chase instinct. Conversely, the best course of action is to back away slowly while looking as big and intimidating as possible, leaving the lion the opportunity to flee the scene. In the event that a mountain lion does attack, the correct course of action is to do whatever possible to fight back.  “The runner did everything he could to save his life. In the event of a lion attack you need to do anything in your power to fight back just as this gentleman did,” says Mark Leslie, Colorado Parks and Wildlife Northeast Region manager.