If you’re a hiker, chances are you have at least one or two spooky hiking stories. Most of us have felt that feeling of bottomless (if irrational) dread of things that go bump in the night. You know the one I mean—it’s a sensation all hikers know well. It’s late at night and you’re just starting to nod off when a stick breaks loudly in the dark woods near your tent. You jolt awake instantly, senses on high alert. Could the sound have just been a noisy squirrel carousing in the undergrowth? No, that’s not likely at all. It’s almost certainly something far more sinister, like a murderous bear, or perhaps aliens. Your doom is assured. You know this to be true, because reasons.

Spooky sounds and mysterious happenings have led to many a sleepless night (and subsequent grumpy morning) at camp, but at least they make good stories for when you get home. With Halloween right around the corner, we decided to celebrate by asking our readers to share their favorite spooky hiking stories from the trail. 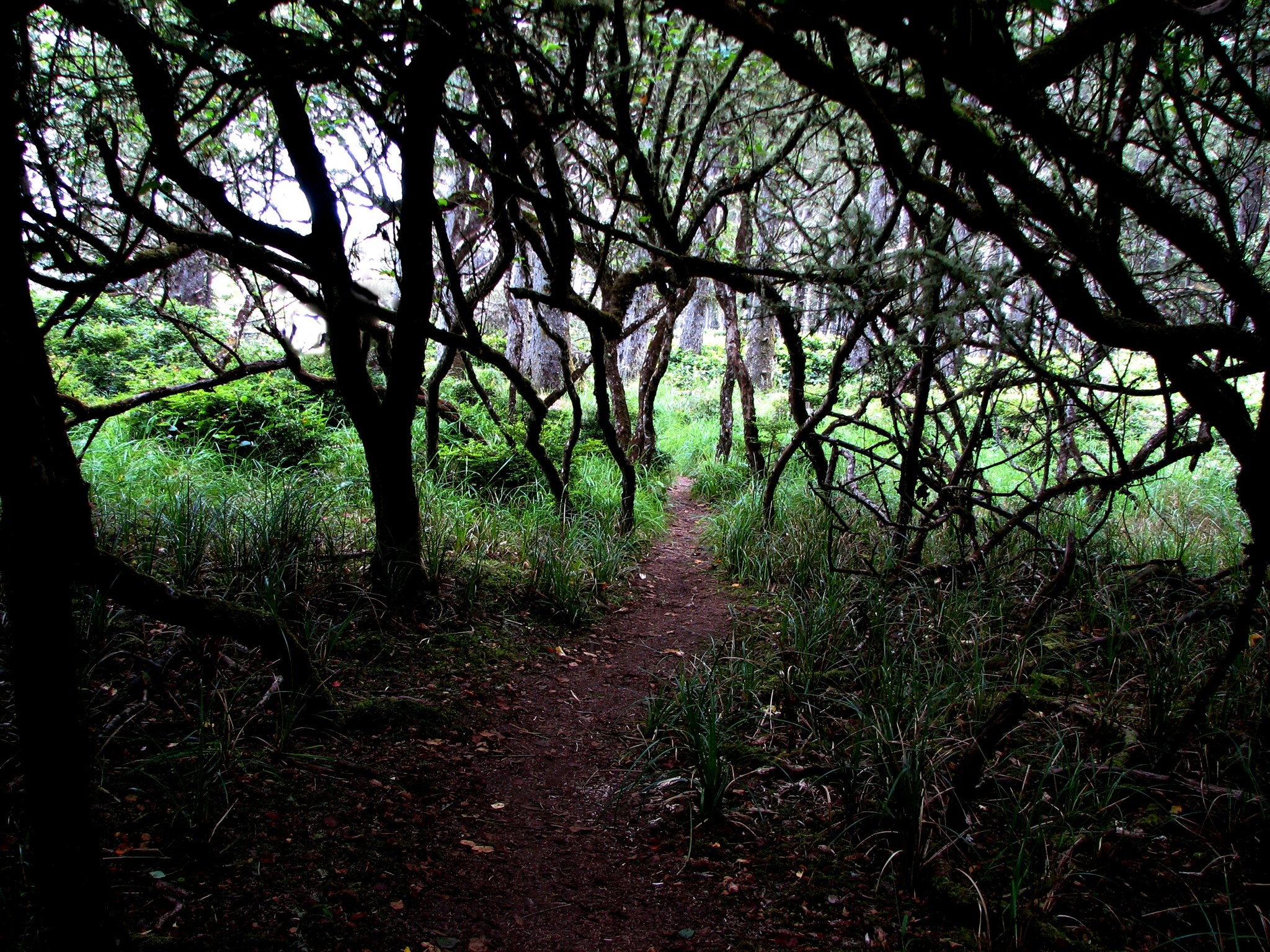 “In 2016, my friend CC and I spent the summer just right outside of Asheville as summer camp counselors. We had gotten really into hiking and backpacking this summer and decided to tackle the Art Loeb Trail. Well maybe it was poor planning or just the newness of it all, but we started at the wrong end of the trail. We were about 2.5 miles in when we finally decided we had started at the “finish.” So we made the decision to turn around and head back through the heavily wooded area.

As we started to ascend the switchbacks, we suddenly heard showtunes from a piano blasting throughout the woods. Having NO idea where it was coming from, we took off. We still laugh about it to this today and wonder who in the world had a piano in the middle of the woods and why.” —Olivia “Olive” Duhee 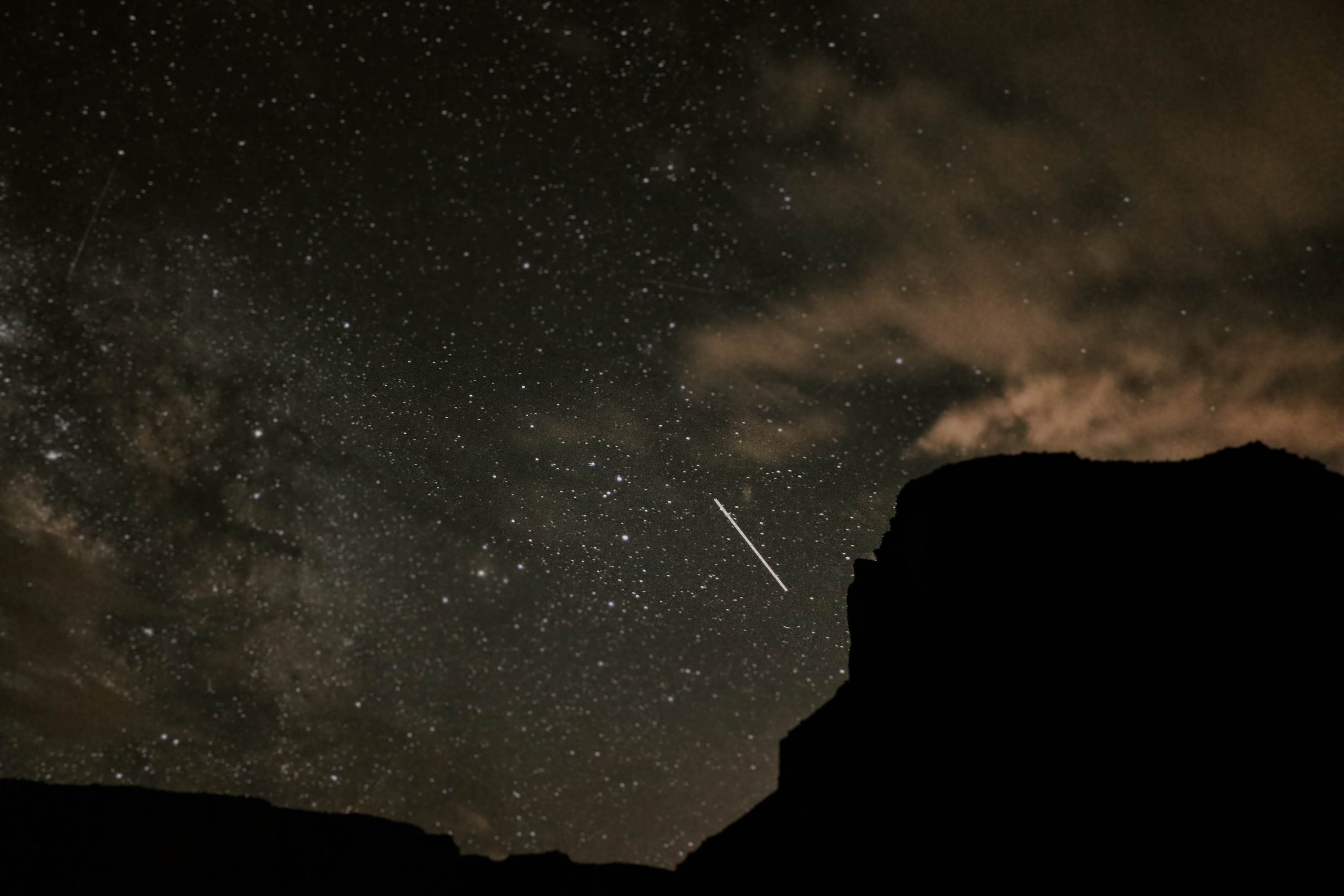 “My friends and I went on an overnight backpacking trip in Capitol Reef National Park on Memorial Day in 2019. We were in a canyon, totally alone, and had only passed a handful of other hikers earlier in the day… Despite the restricted sky view from inside the canyon, we were doing some stargazing.

Suddenly, a line of stars started moving across the sky. A line of stars does not sound spooky. But there were several—too many to be a normal orbiting satellite, moving too slowly to be meteors. but lacking any flashing lights indicating a normal airplane. After the lights passed over both canyon walls and went out of sight, confusion and hysteria took over. the main concern of my friends: WERE WE WITNESSING THE BEGINNING OF THE ALIEN INVASION? … I should mention that sobriety was… lacking at this time.

It wasn’t until months later we discovered the source of the stars: SpaceX’s satellite internet network known as Starlink… I can’t help but wonder if any other backcountry campers were scared shitless that night by what appeared to be an invading train of alien spaceships.”—Rachel 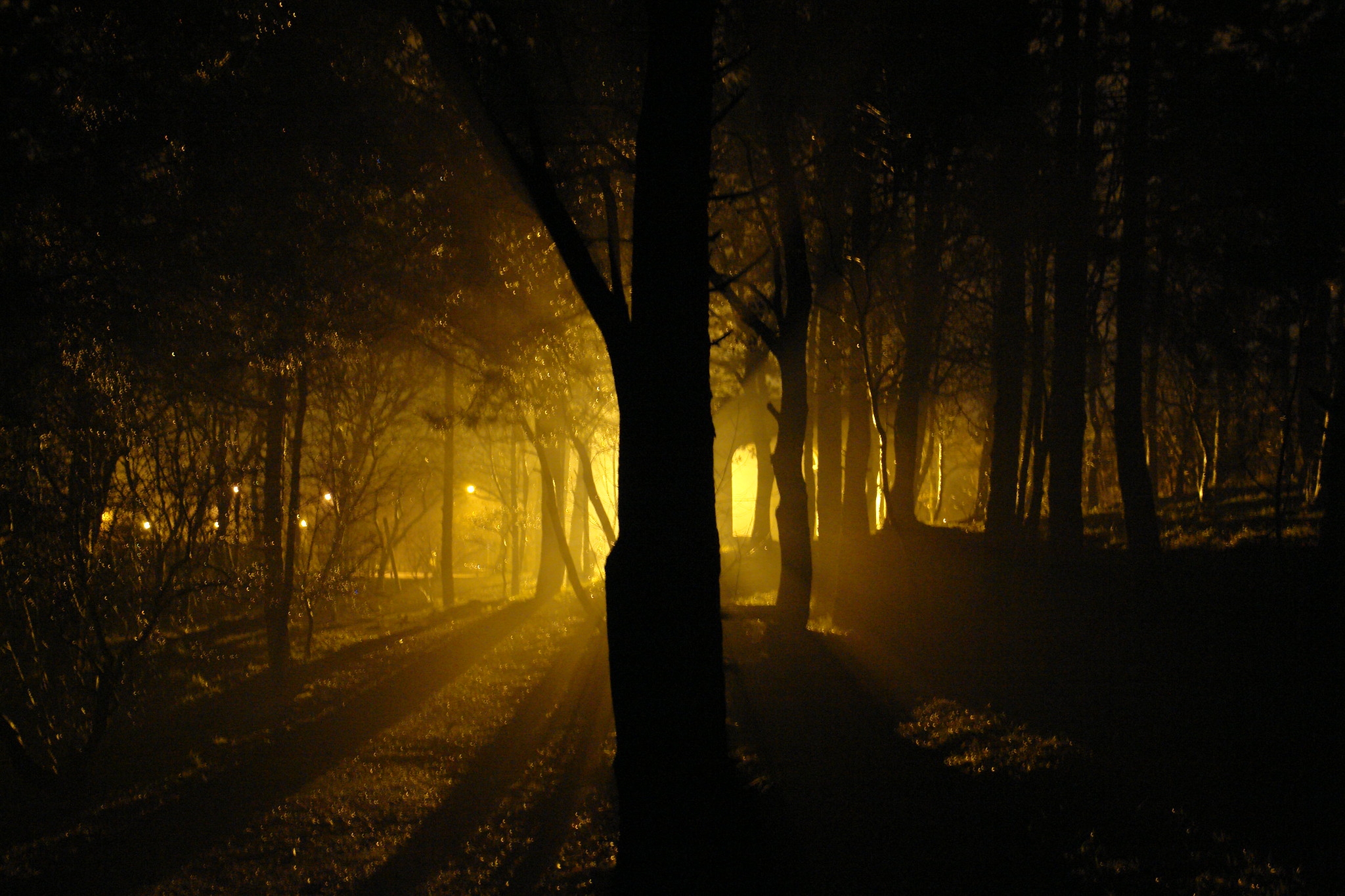 “It was a long, rainy, cold night… classic. I had just gotten into my tent for the night, snuggled with the best pooch in town. I knew I was only a mile from a long dirt road… so any noises or lights I just attributed to just that. You can just call them excuses.
I was laying there as I began to hear a few unnerving noises. Almost like the sound of rain on a raincoat… like someone was walking around my tent…

Not even five minutes later I see a flash of light at my tent… maybe someone just got to camp? I haven’t seen anyone though. But the lights continue… in a horizontal formation around my tent. Blinking from left to right, jumping to the other side of my tent, and doing another pattern of lights…. one at a time. In no specific pattern. Just in a horizontal line. I begin to get a bad gut feeling… I couldn’t help but imagine someone was circling my tent.

It was so odd though. The lights were perfectly shaped, the exact size and glow all around the tent. Same horizon line.
It had to be cars, right?!

As soon as I tried to convince myself otherwise, they appeared above my tent… again in perfect formation. ABOVE. There were barely any trees, no way there was light reflecting perfectly the same shape and glow as around my tent. It was that moment I panicked, covered my face with my sleeping bag and prayed… that whatever it was wouldn’t harm me.

I never found out what it was to this day. But I’ll leave it up to your interpretation. The consistent shape and glow of the light, in the exact same plane as each other. In weird patterns. Never lighting up at the same time. And sometimes going “backward.”

All I’m saying is I believe in aliens. And you should too.” —Sarah “Sniffles” Legg

The Hockey Stick and the Saddle 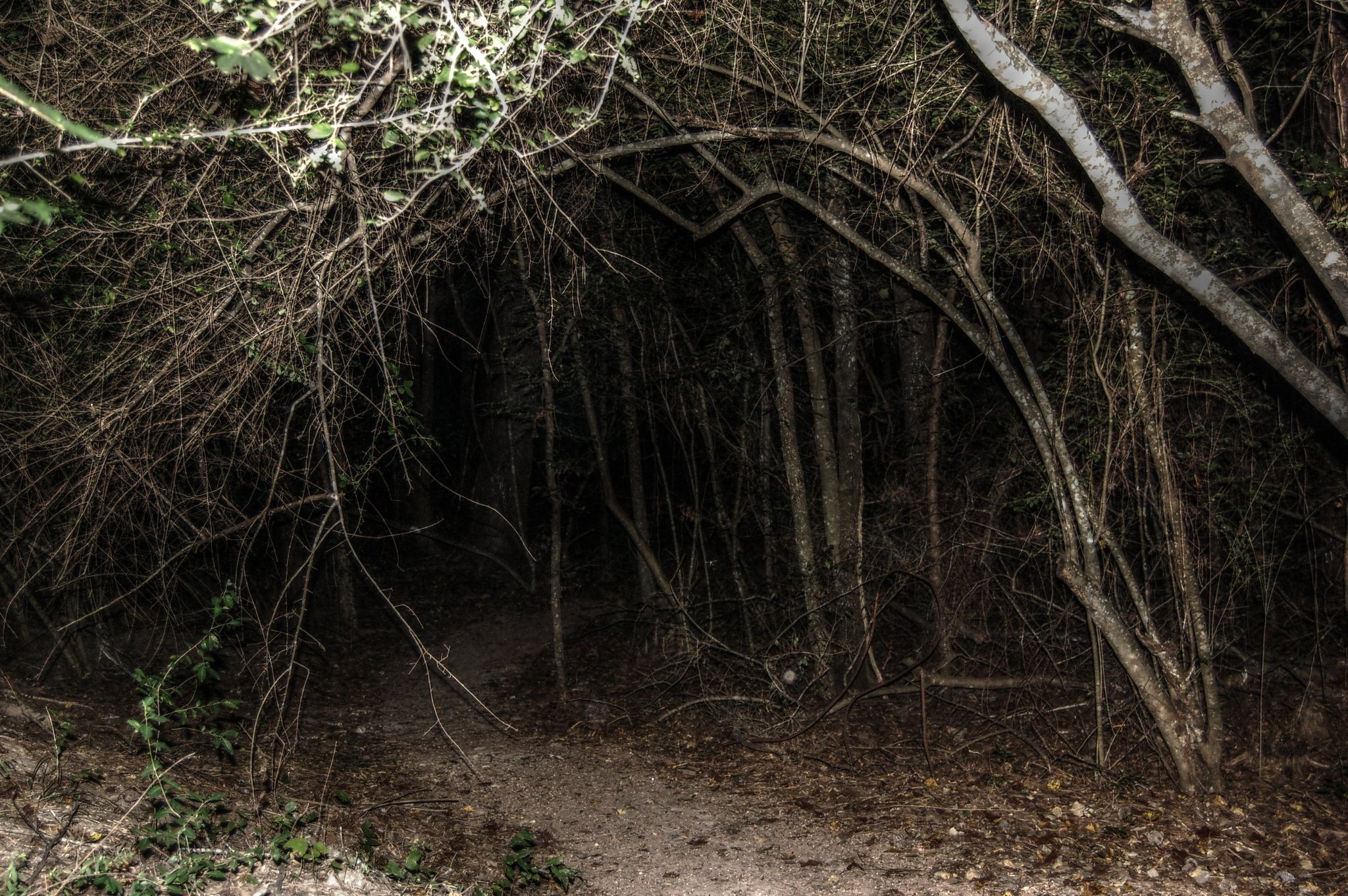 “… In 2019, I had just left my tramily at our lunch spot to head south from Goat Rocks. Throughout my PCT travels, a few places have given me a sort of look-behind-you vibe. This area certainly did. Once you leave the Sheep Lake area, you plunge into the woods. All of the weekend backpackers and day hikers are gone and you are on your own. I tend to snack as I hike, but something stopped me in my tracks… Affixed to the branches of two small trees was an aged saddle. I wondered for a bit how it got there and what happened to the horse and owner. Then I carried on.

Fast forward to this past summer. My friend Limbo and I were doing a self-supported section north through Goat Rocks. I noticed the woods feeling familiar and told her about the saddle. We both peered around for it and then eventually gave up. A few hours later we turned a bend and Limbo asked if we could stop for a snack break. As we demolished our Snickers, I looked up. There was the saddle.

Earlier that day we had seen a man hiking the opposite direction with a hockey stick. We would encounter him again soon after our snack break. He informed us he drove between and was piecing together the PCT. Limbo asked him if he knew about the saddle. He gave us a quizzical look. It definitely seemed plausible that the man drove between trailheads. But I wondered about him too. That part of the PCT will always give me a funny twilight zone feeling.”—Lisa “Roller” Lesko

The Ghostly Cries of a Lost Hiker 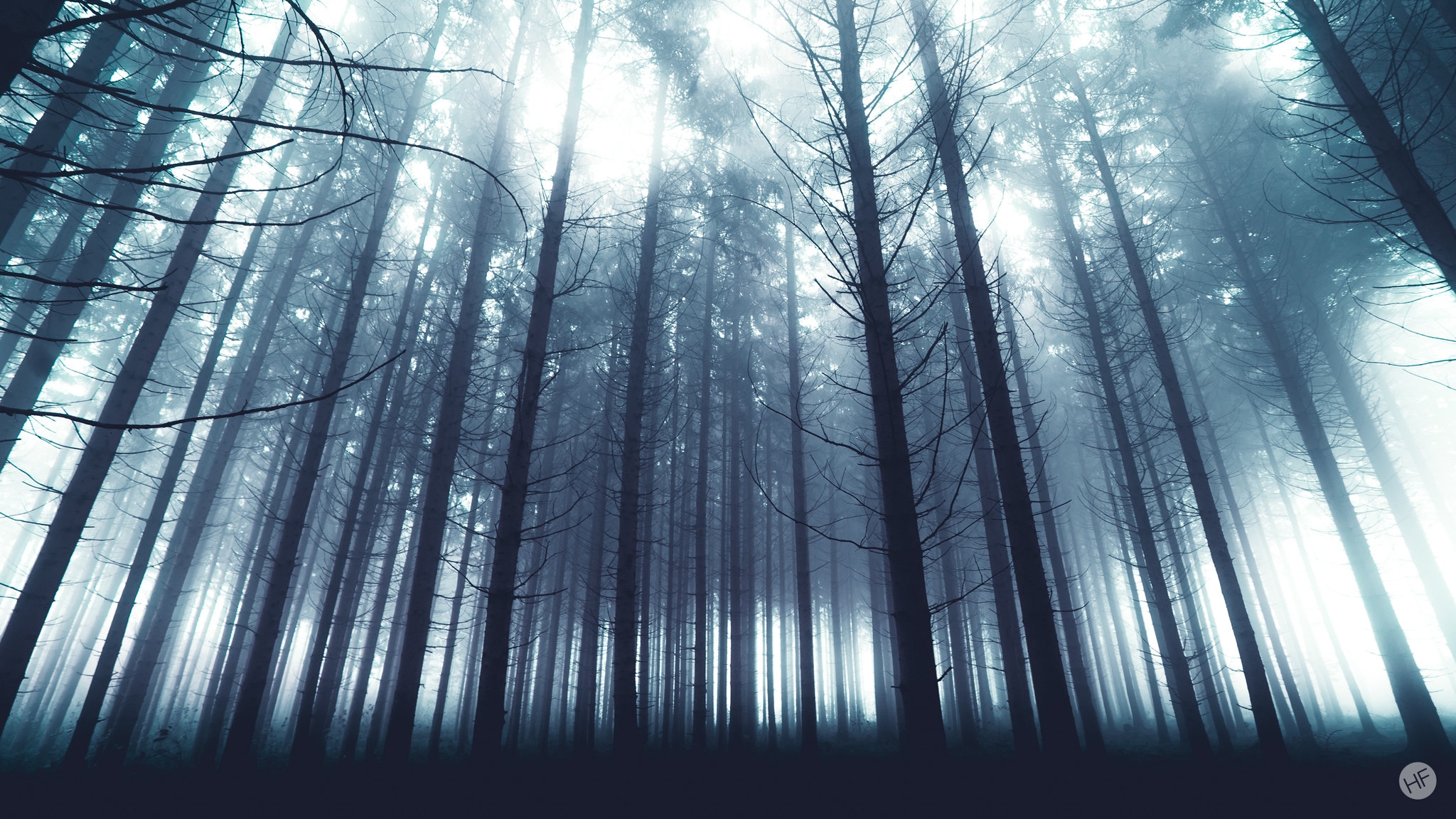 “…Went down to Wilson’s Creek Wilderness… for a weekend trip…

At some point at night, I awoke to the guy I was sharing the tent with crouched on the balls of his feet over me with his knife drawn. Immediately I thought I was about to be sacrificed to some odd religious backpacking ceremony. I was shit terrified and looked up at him as I assumed he was about to stab my heart and said, “Hey man, what’s going on?” … He whispered, “Listen!”

I was just like anything you say, bud. As long as you don’t murder me. So I listened. Then after five minutes that seemed like three hours I heard this super eerie call… I shot up, found my knife, and was on higher alert… The eerie voice that we could only assume was a crazed redneck or ghost kept getting closer… It got super close and we debated running into the woods… but decided silence was best inside our $30 bright blue Target tent. Slowly, after it seemed to linger just across from us, the voice moved away and kept hollering.

The next morning we woke up and had a hard time comprehending what we heard. Was that even real? …We packed up and started hiking. After a few miles, we came across an orange ribbon and message across the trail. The message was to a lost day hiker who never returned the day before. They suspected he was hungry and cold and wandering the area all night…

He was found and rescued that day. But we could have saved him the night before…”—Jeff “Long Legs” Fissel

The Carrot-Eating Ghost of the Whites 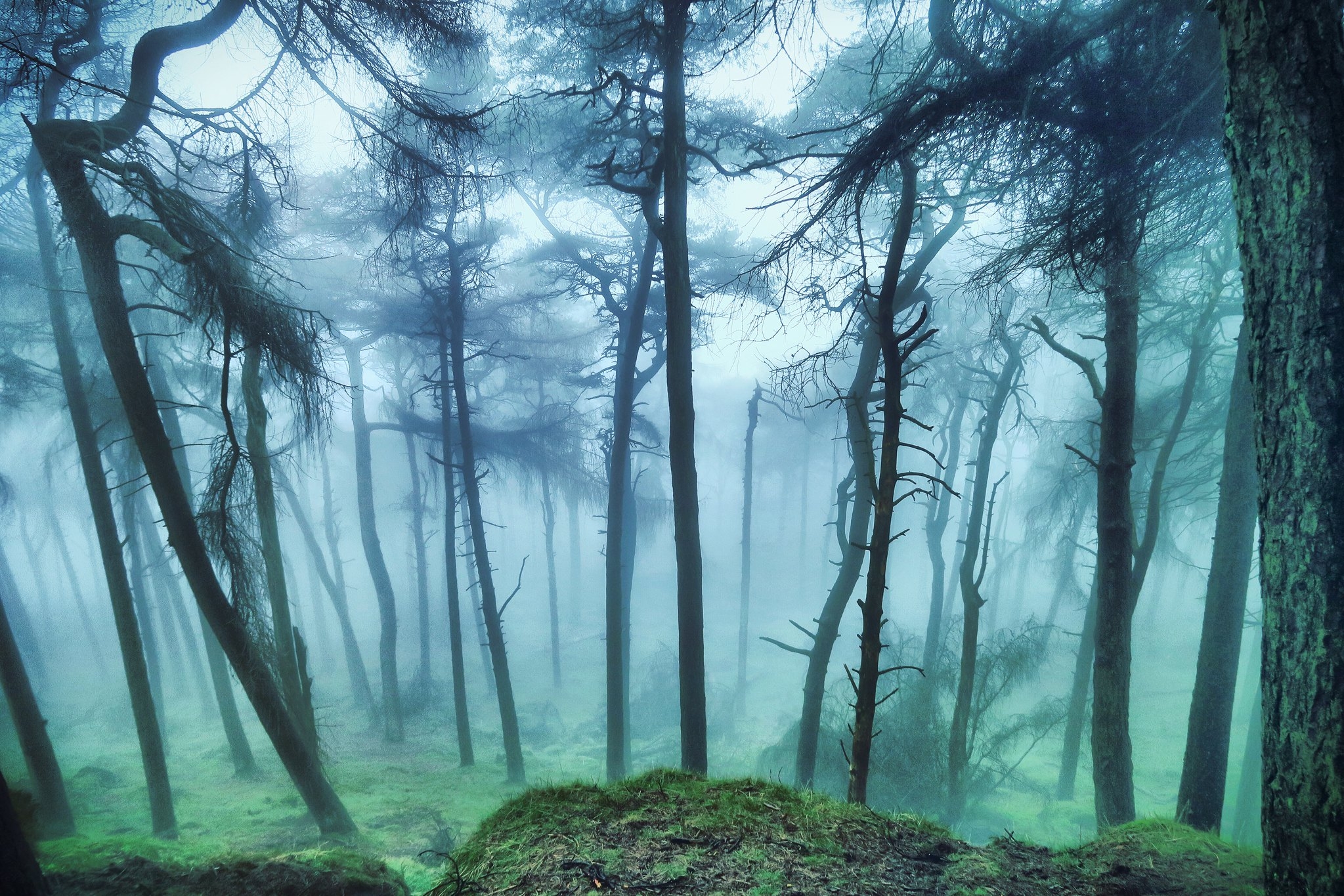 “A group of us were hiking the ridgeline between Lincoln and Lafayette on an abysmal rain-soaked, cold Spring day. It was a day unfit for man or moose up there, yet we were enjoying the time together above timberline. We hunkered down out of the wind and driving rain against the old stone fire tower foundation on Mt Lafayette to hydrate and eat quickly.

Out of nowhere a tall, slim hiker in a jean jacket emerged from the scrub and quietly sat down on the other end of the stone structure. He pulled a giant carrot out from inside his jean jacket and crunched it slowly. He said nothing. We all stared. He finished his carrot, stood, and returned from whence he came. We all agree that he was likely a White Mountain ghost to this day.”—Thomas Guertin 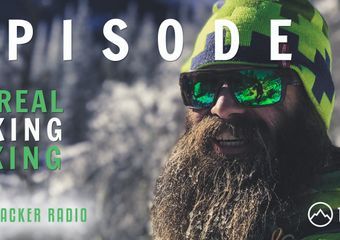 Backpacker Radio Episode #4: The Real Hiking Viking Pt II, Scariest Moments from the Trail, and Thru-Hiking NutritionFor Episode #4, we are again joined by our buddy, The Real Hiking Viking.  This time, instead of an interview, Jabba joins us as the third co-host of the show.  It does not disappoint.  Or maybe it does.  Who can…Read More 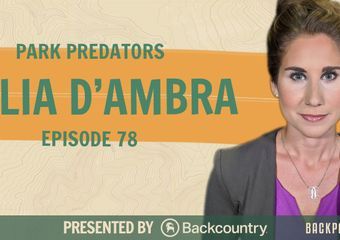 Backpacker Radio 78 | Delia D'Ambra of Park PredatorsIn today's episode of Backpacker Radio presented by The Trek, brought to you by Backcountry.com, we are joined by Delia D'ambra.  Delia is a full-time investigative journalist and the host of Park Predators, a podcast that details some of the…Read More
Featured image: Graphic design by Jacob Woods.
< Previous Post
Next Post >