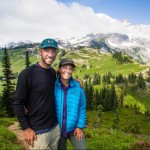 After all the rain yesterday, the stars came out last night and treated us to another show, Milky Way included. We awake at 6 am with the intention of having breakfast at 7 and hitting the trail earlier than normal. Today is a big day with lots of elevation gain and loss en route to a few key destinations—the Boz-Uchuk Lakes, an unnamed 3516 meter pass, and possible views of the snowy Tashtambek-Tor-Bashi Peak.

There are two key elements on this trek, so we have learned, that we cannot control. One is the weather; the other is what we are calling the K-factor. Our friendly guide and horseman combo, Urmat and Adis, operate on their own time, Kyrgyzstani time, or K-time, for short. There seems to be a national agreement that no serious endeavor begins before 9 am, preferably 10 am.

As we are on vacation, we should be OK with this, but as hikers we want to get going before it’s either too hot or the rain sets in, and as photographers we want to capture the good light of early morning. Alas, we cannot control the K-factor, and so breakfast arrives closer to 8 and, after helping to pack up camp, we depart at 9. 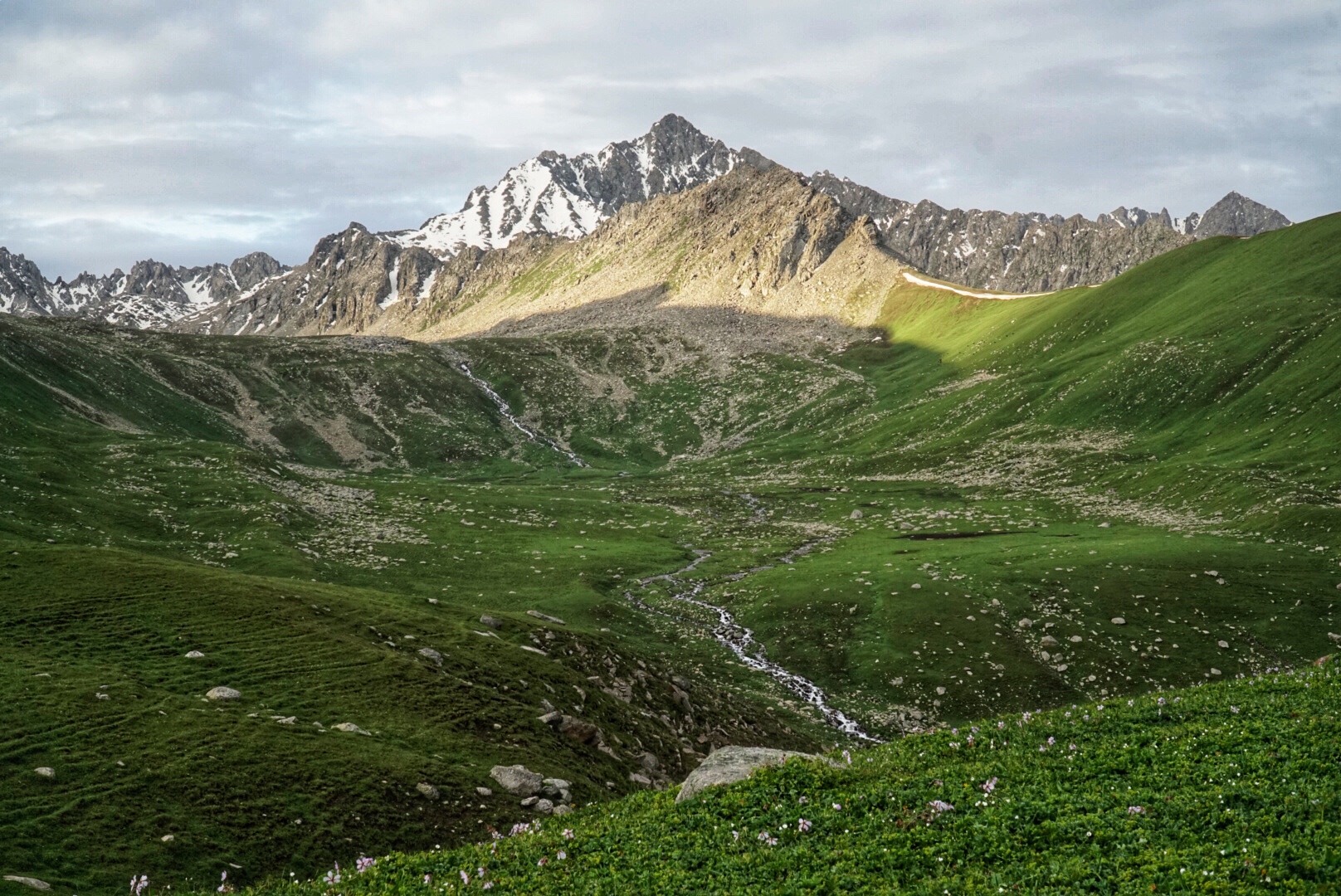 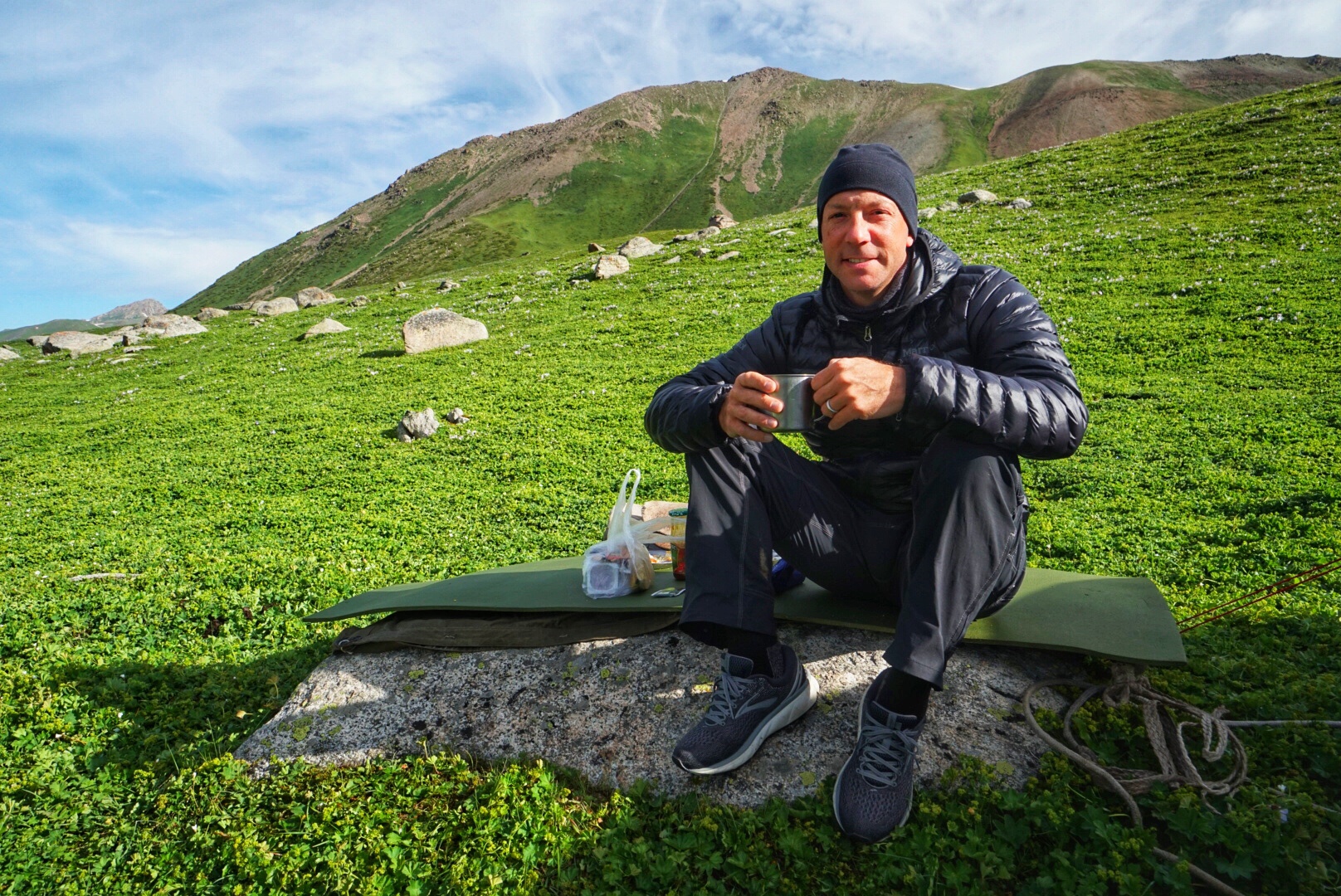 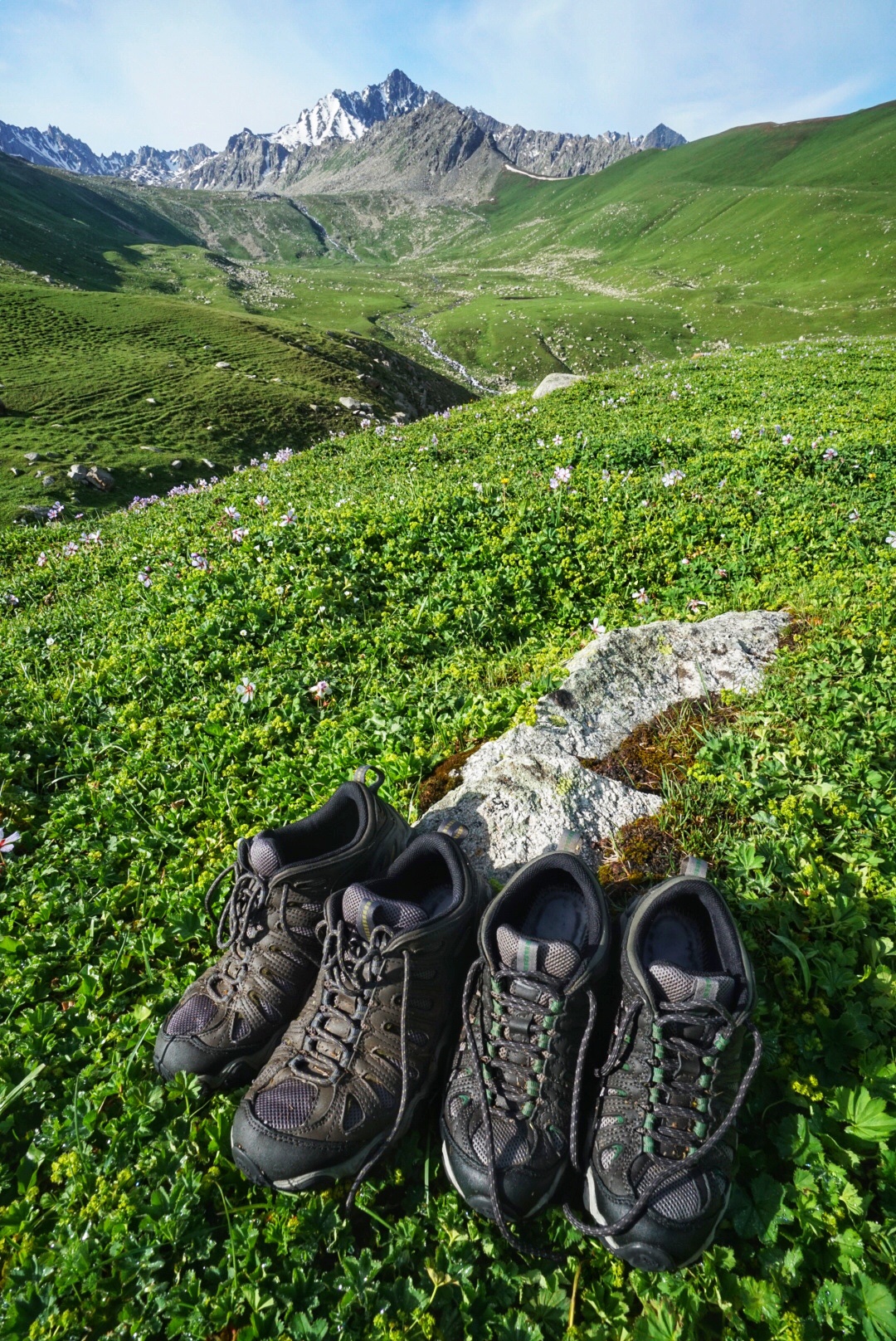 We are eager to get up to the Boz-Uchuk Lakes, the star attraction of this trek, and so we go ahead while Urmat and Adis load up Bob and walk him toward a meet up point.

We cross the river and climb up toward a high ridge. As we skirt the ridge, it looks and feels a bit like we are making our way across an intentionally terraced hillside. In reality, we are seeing dozens of paths used for centuries by the sheep, cows, and horses that pasture here. Today, it’s choose your own path! As long as we keep tracking up toward the moraine on the left we are fine. 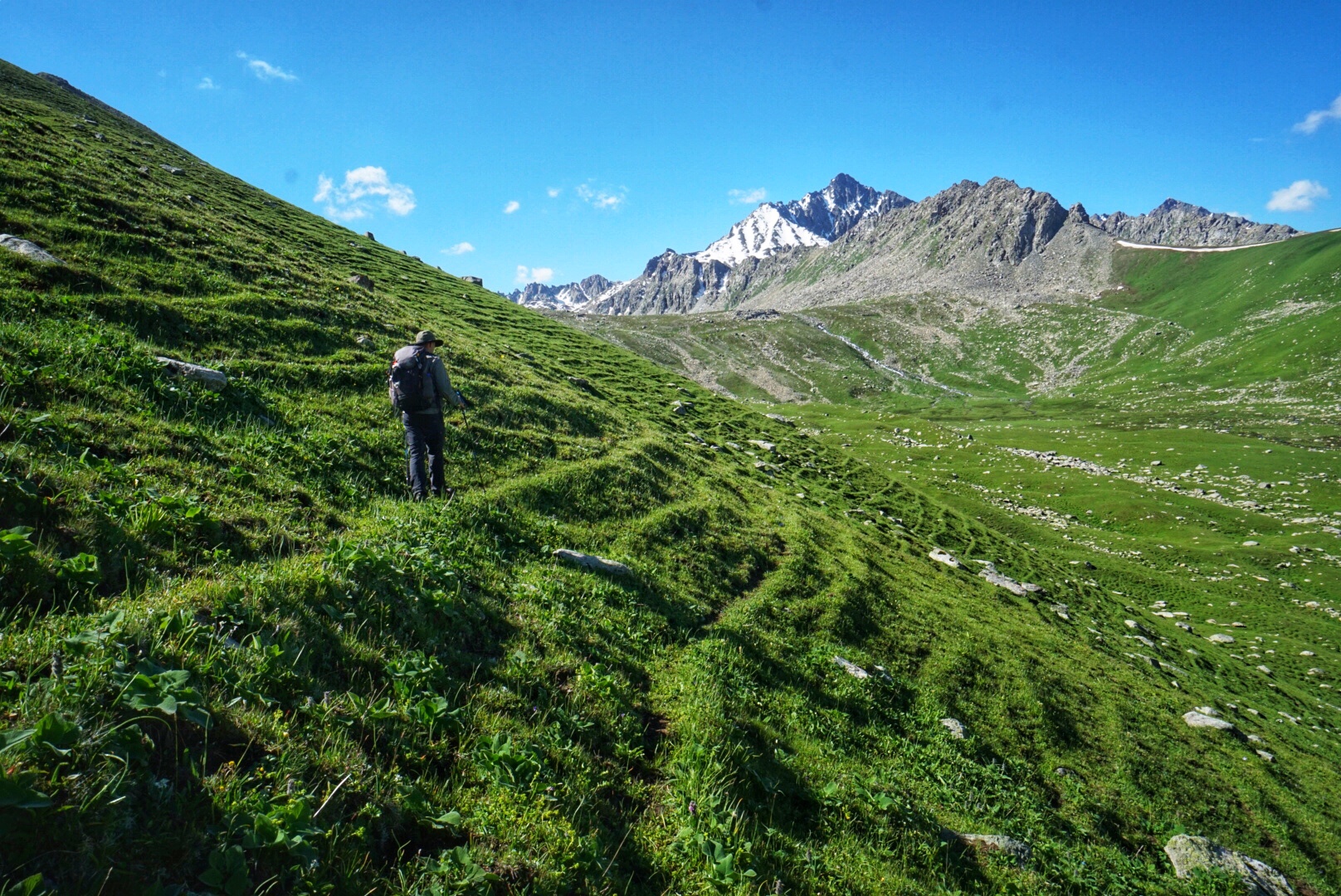 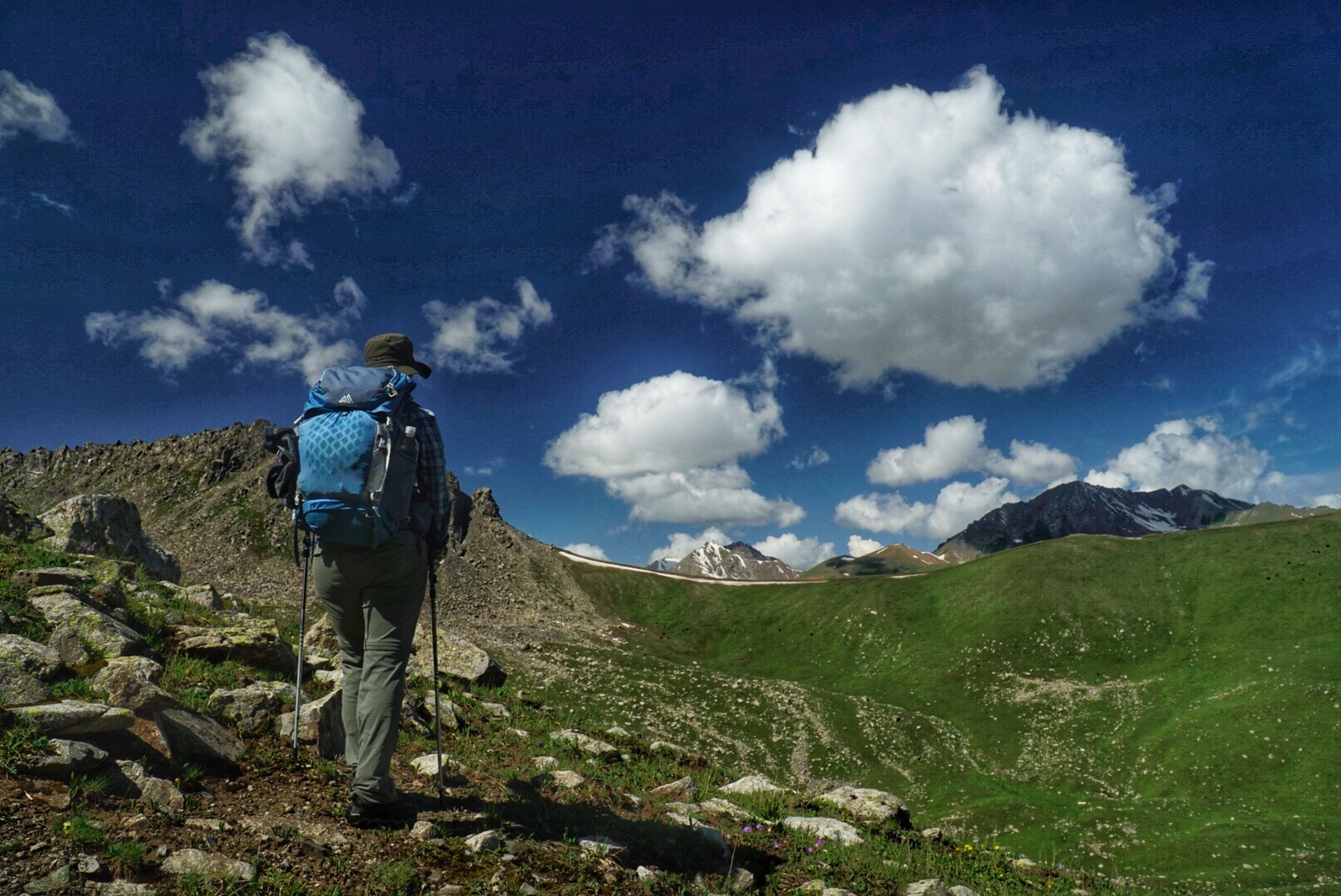 We make quick progress and soon arrive at the first of the two lakes. This one is fairly big and shaped like the number eight with a peninsula of land sticking out in the middle. We come in at the bottom of the eight, so to speak. From the shoreline, we can see a Slavonian grebe and its juvenile floating out in the middle. Behind is an impressive curtain of grey granite mountains streaked with snow. 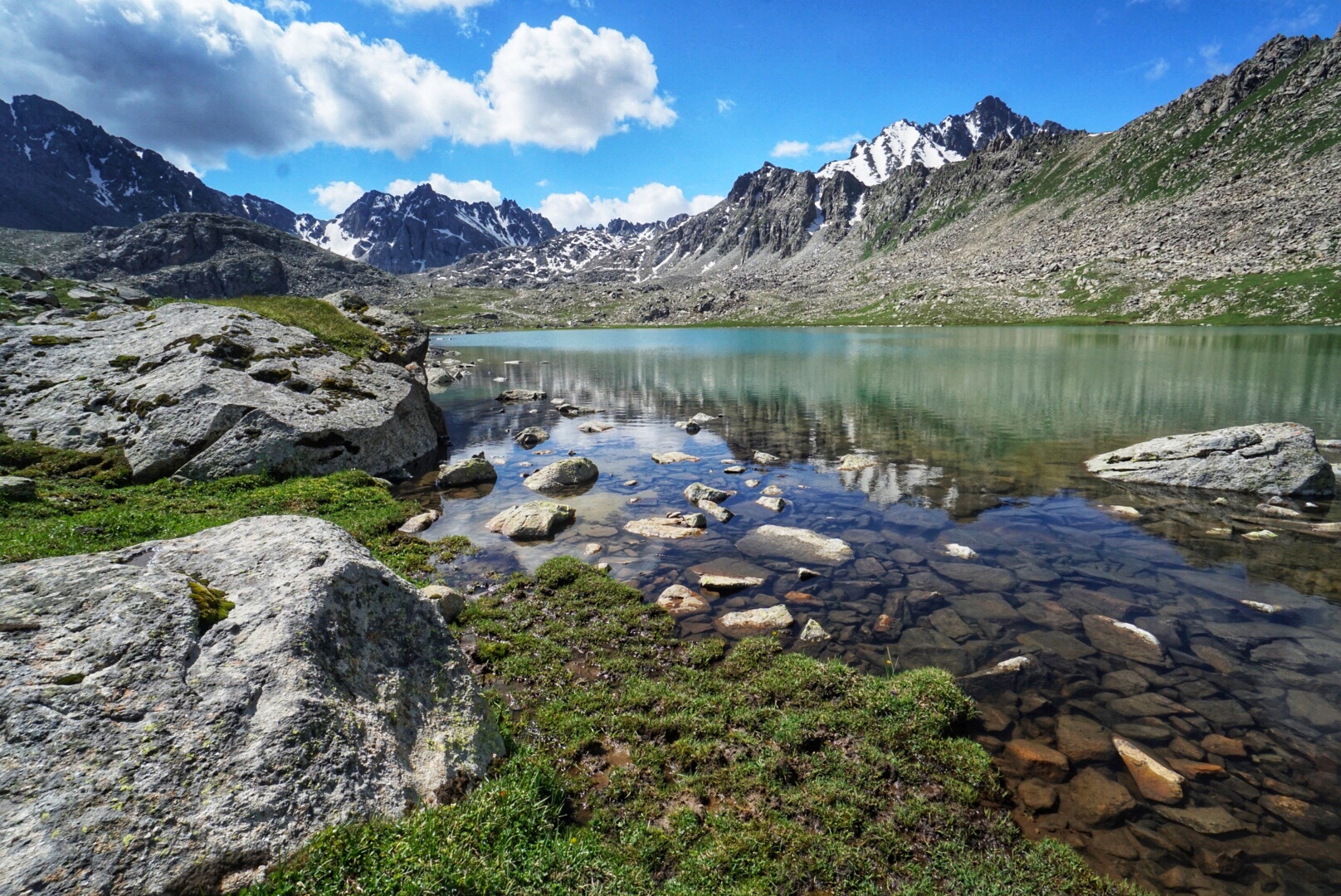 We drop our packs and go in search of a good reflection shot. We are in luck, as the wind has not picked up too much, and the sun is shining! Urmat has rejoined us by this time, and so we move around the left side of the lake exploring different angles. 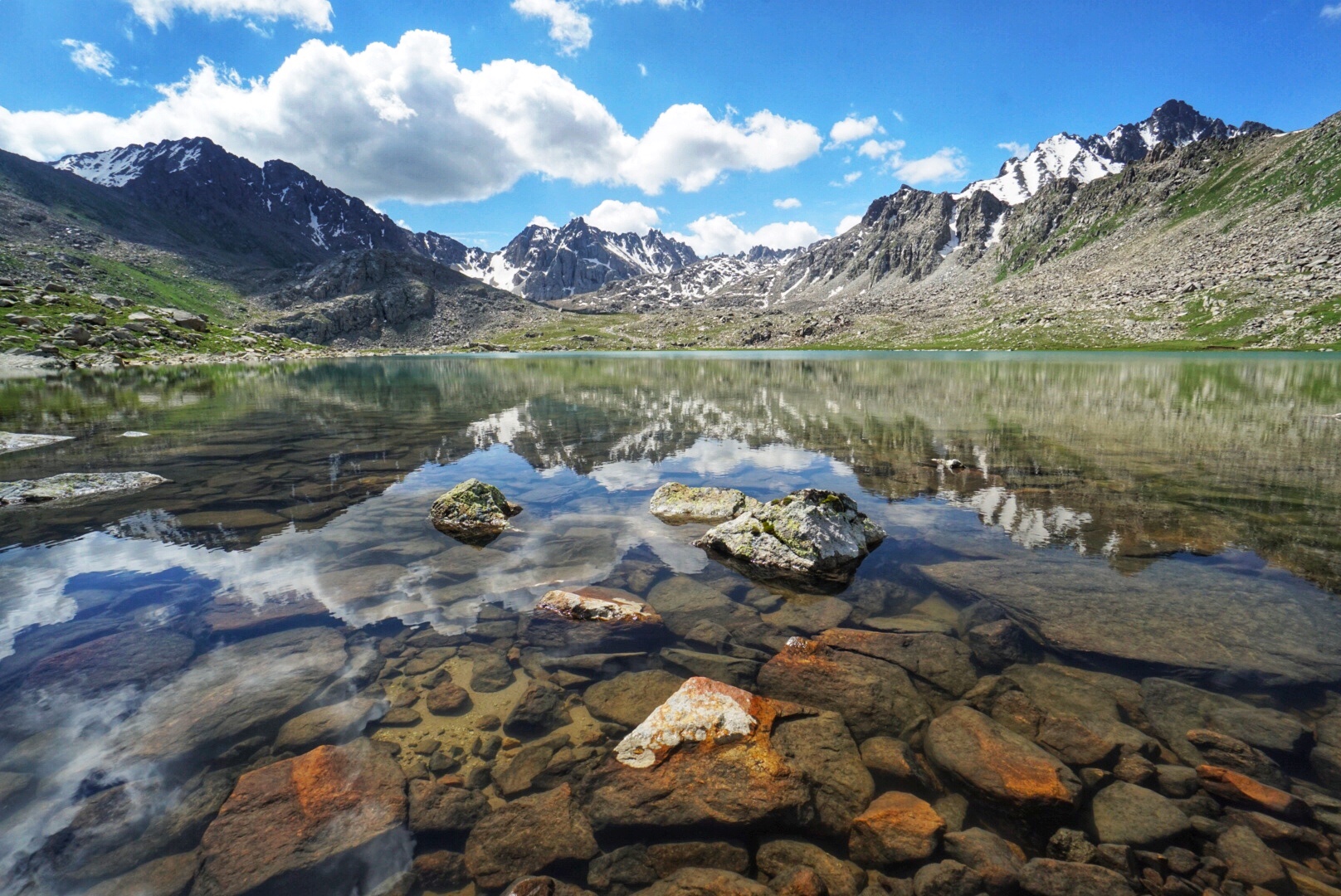 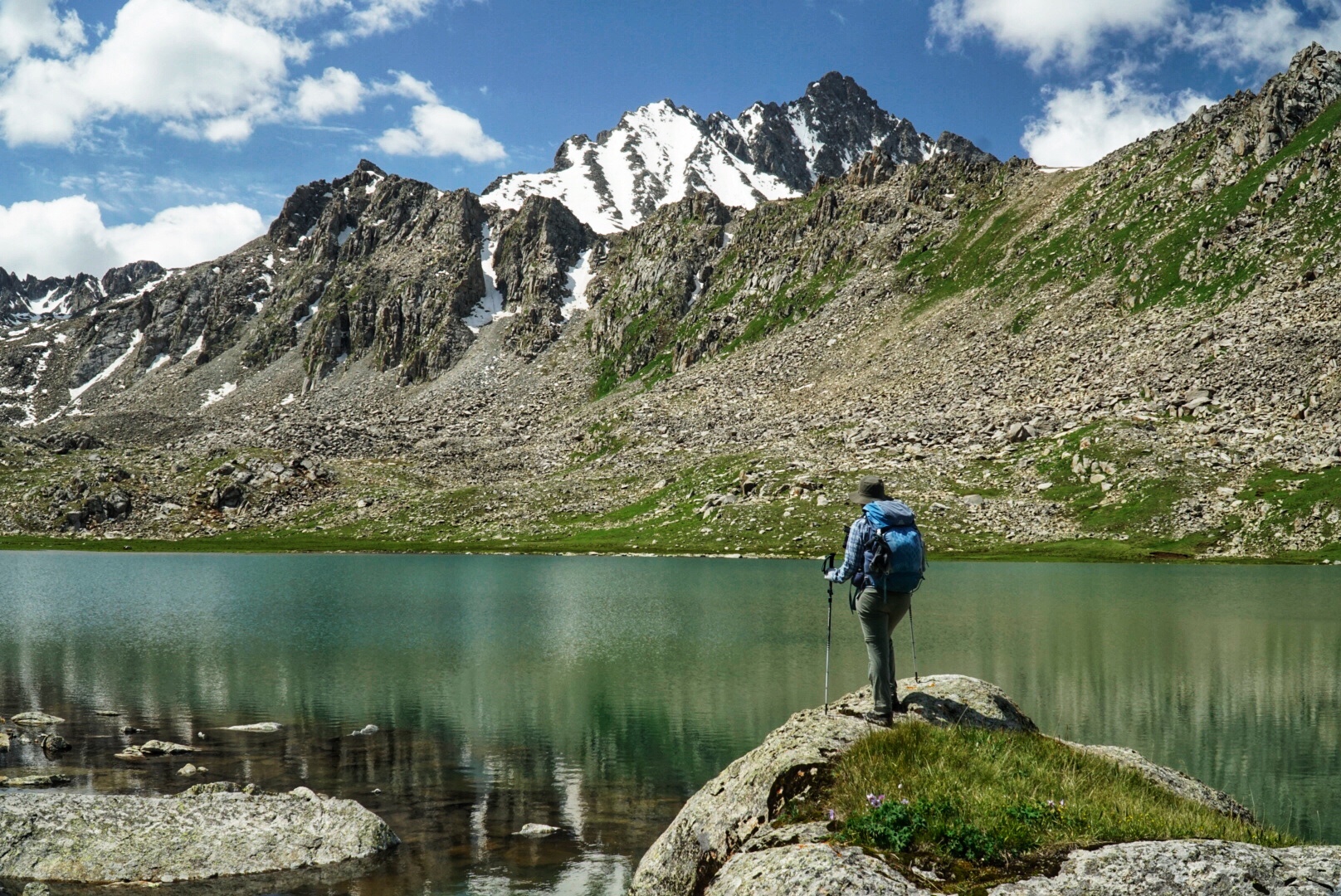 At the far end we spot a pair of Common redstarts flitting about among the rocks. We begin to climb again toward the second lake which is farther than we expect. As we crest the last ridge we see a blue lake, still half-covered in ice with a wall of rock towering above. Urmat grabs the binoculars and spots three mountain goats just before they disappear over the snow-covered ridge. 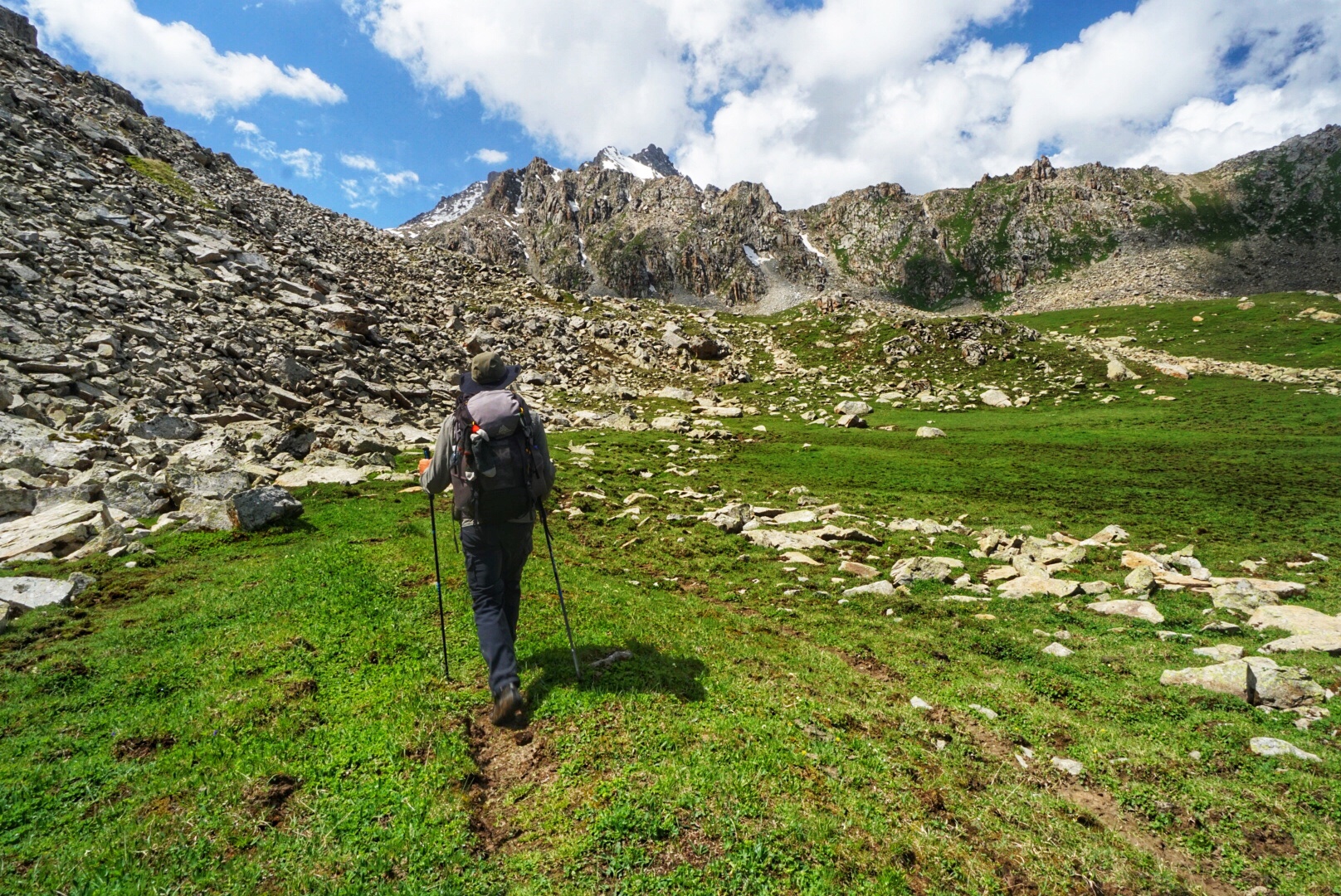 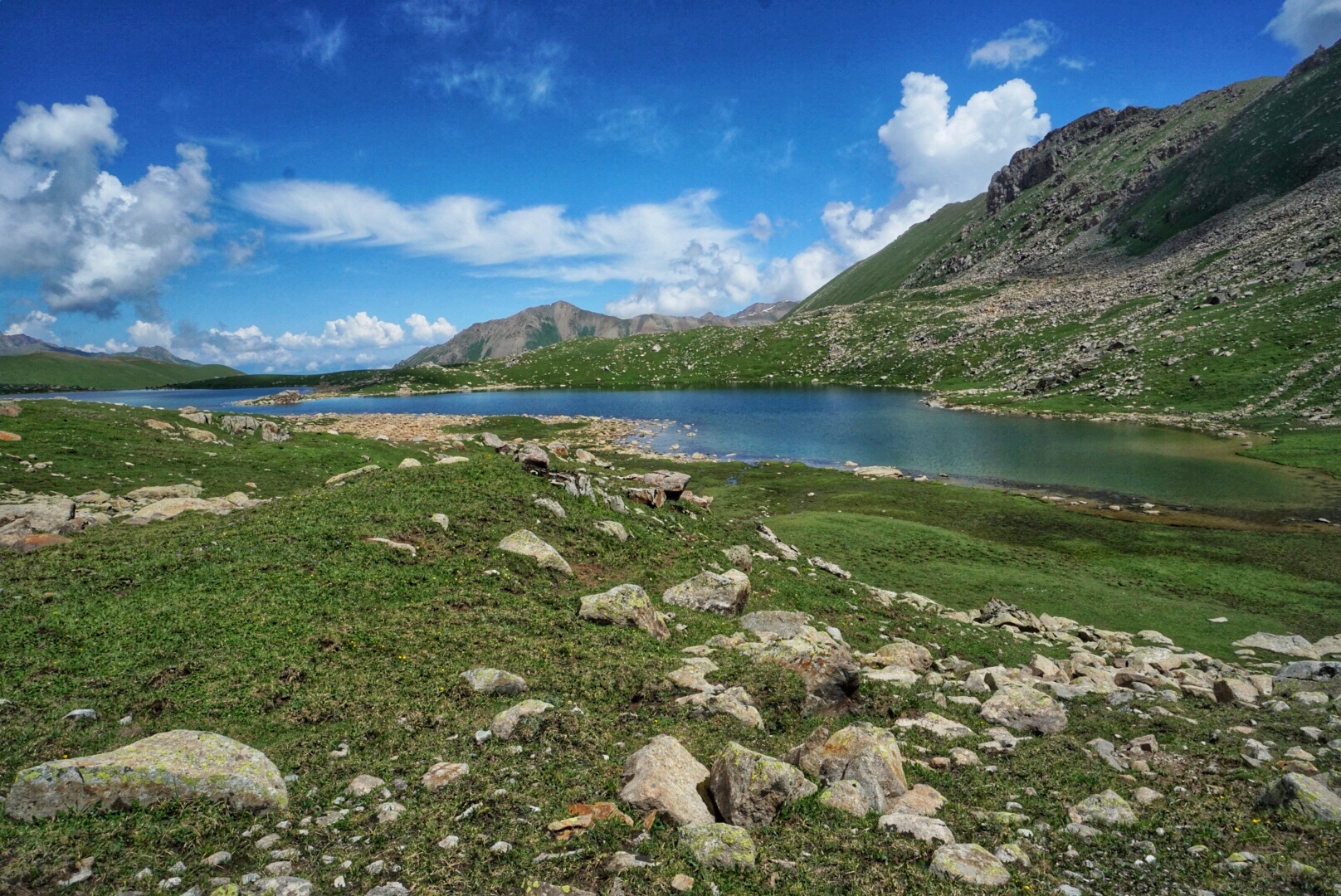 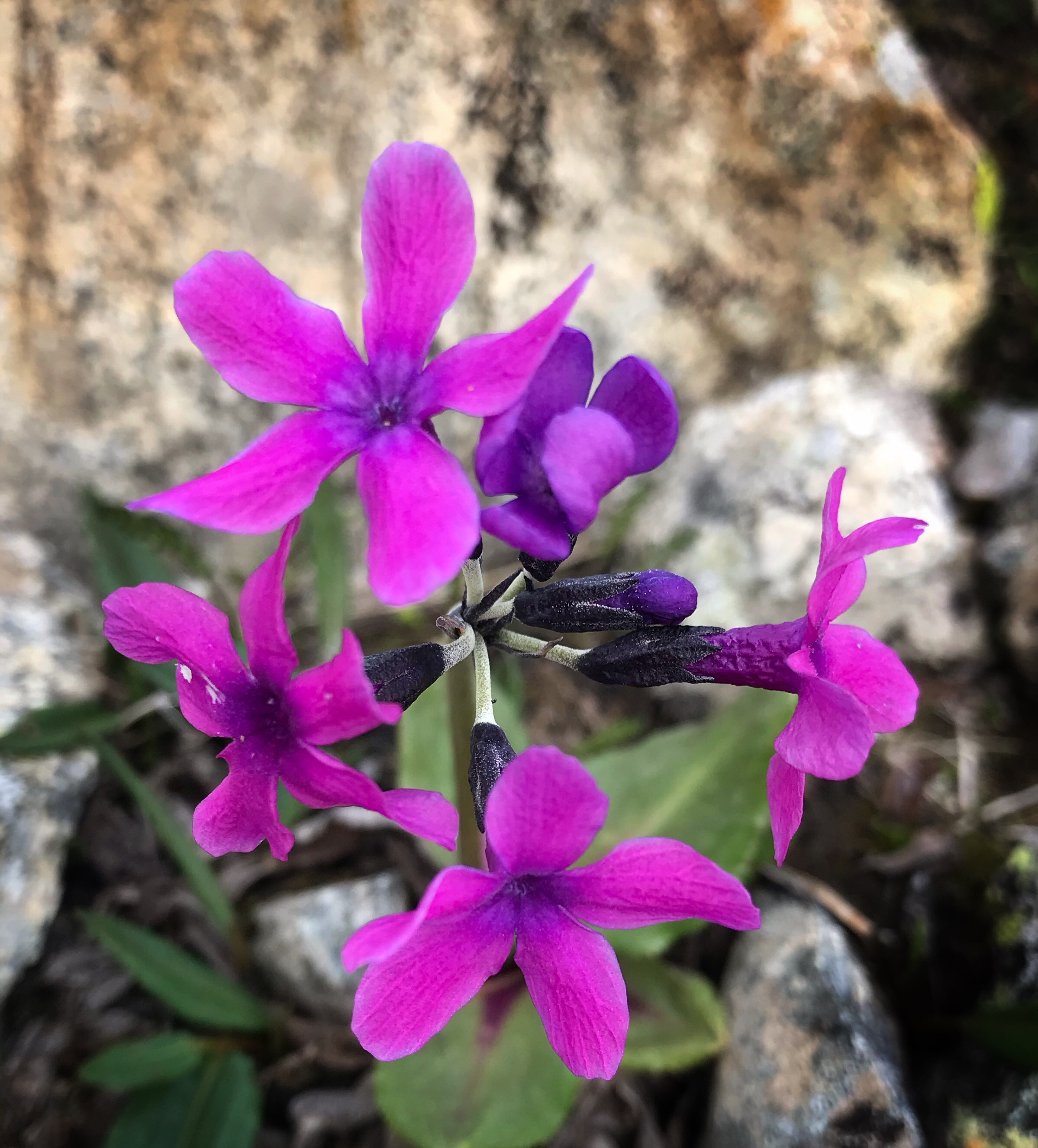 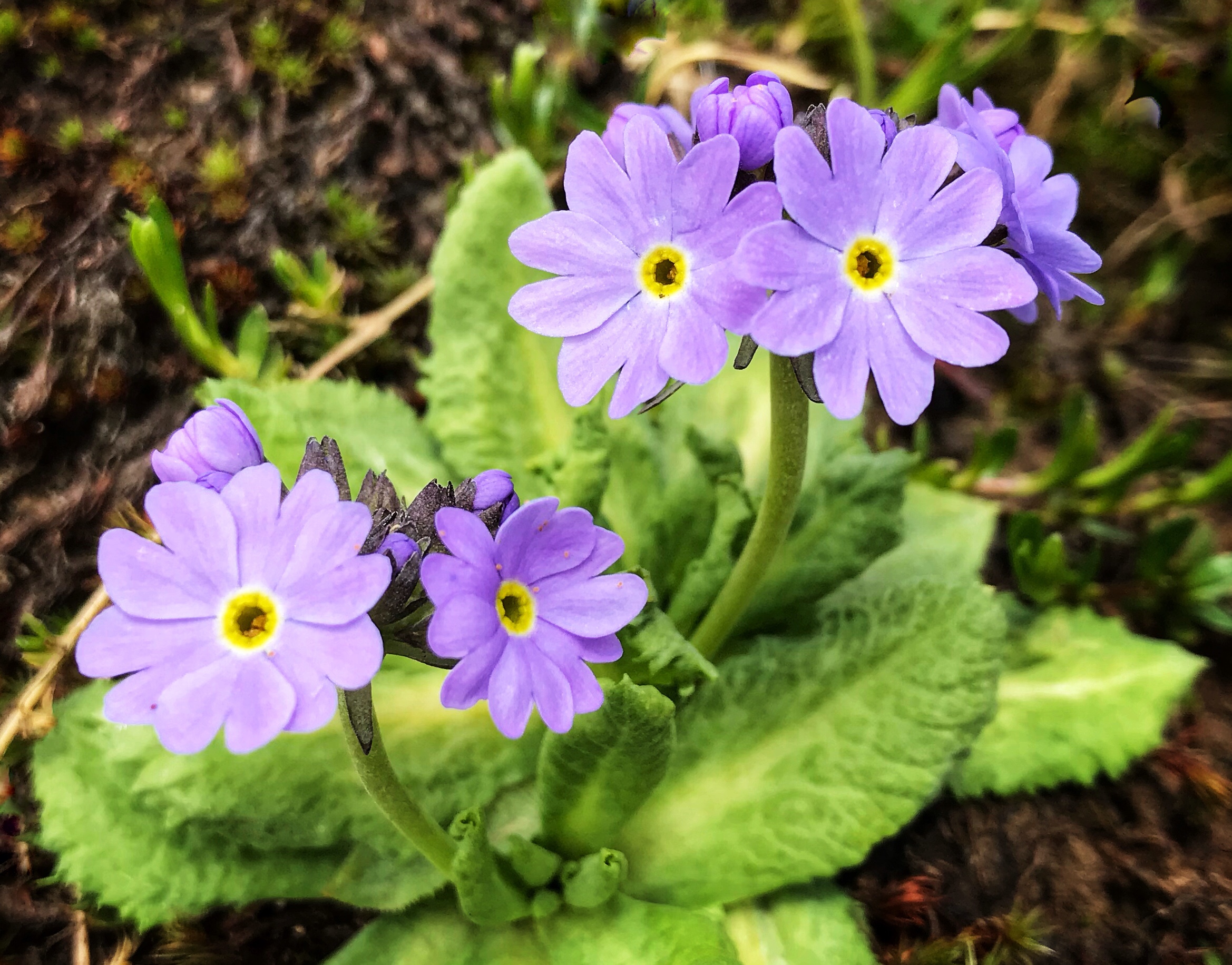 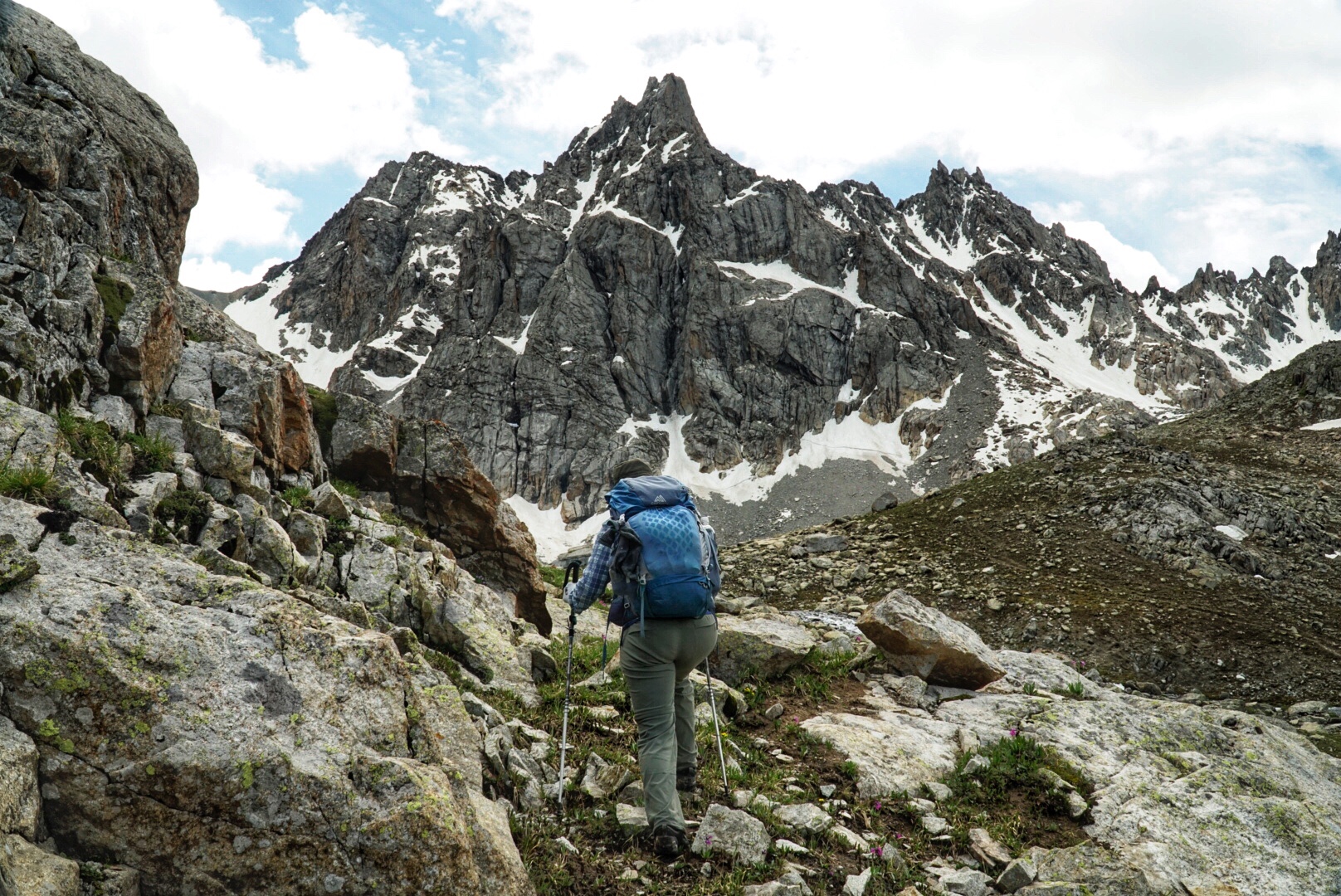 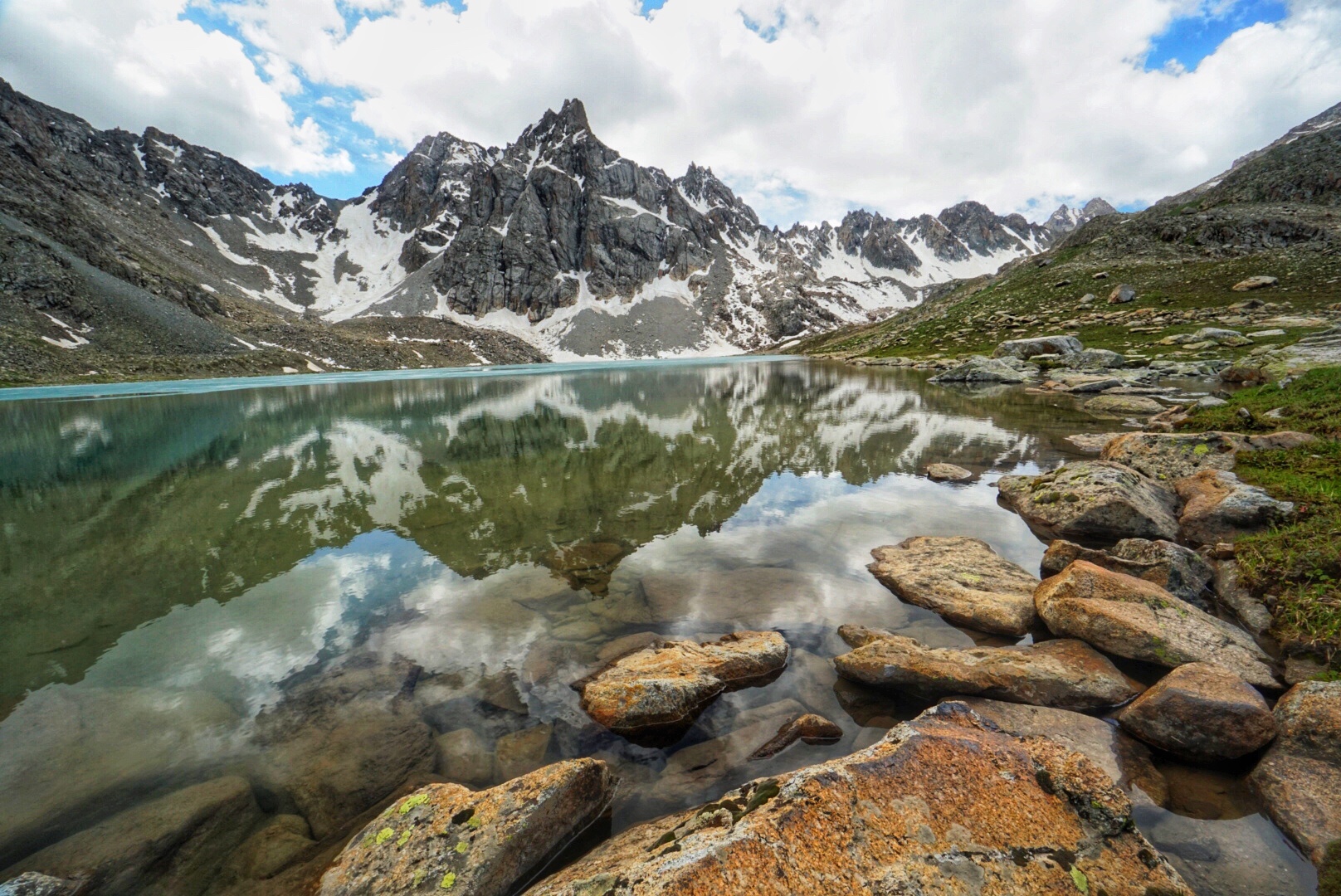 We play around here with the wide-angle lens, which is necessary to capture the magnitude of the scene. Down the lakeshore, there are curious ice structures right at the water’s edge which are melting and collapsing even as we photograph them. They add an interesting foreground element to the beautiful scene. 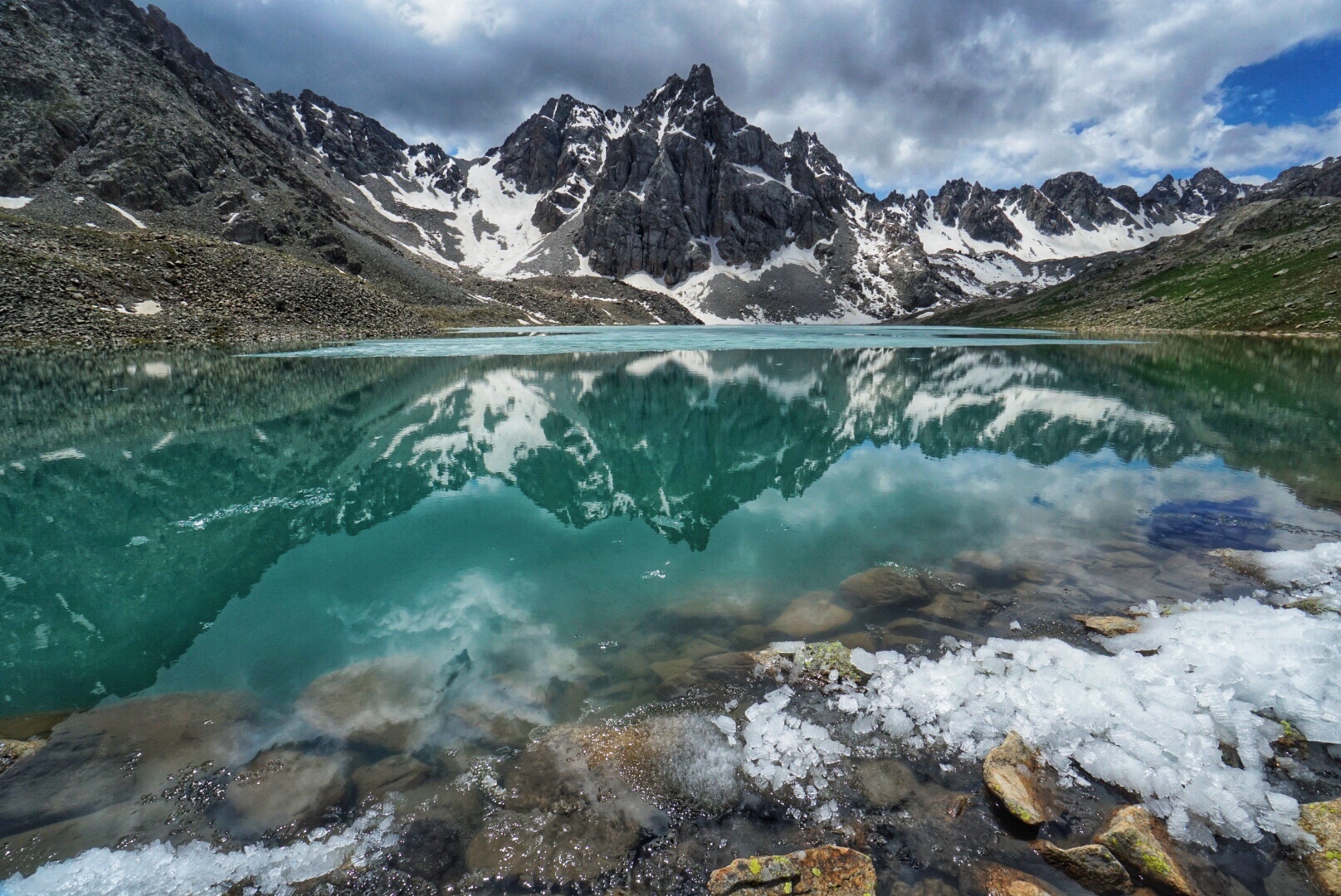 Once again the clouds are turning gray, and so we decide it’s best to move on. We follow the outlet stream down and work our way down past some small waterfalls. Then we complete the loop of the lower lake and begin to contour left around the hillside crossing a boulder field. We can hear the stream running below the rocks but cannot see the water.

Soon we are following a diagonal path that takes us up to a ridge where Adis and Bob are waiting. We stop here for lunch and admire the view in all directions. Never sure of the weather, we keep it short and keep moving. We still have a down-down-up-down to go before we reach camp for the night.

We descend fairly quickly several hundred feet following a well-worn switchback to the valley floor. We cross the valley and continue up a short rise before descending further still to a lower jailoo. There are a few horses grazing off in the distance but no sign of a horseman tending to them. We do spot a really cool sun dog.

Now comes the big climb of the day, up over one thousand feet to the unnamed pass at 11,100 feet. We manufacture switchbacks following animal paths, pausing occasionally for a brief rest. Urmat and Adis are always faster, and whenever we catch up to them, they are inevitably lounging in the grass. I decide it’s my turn to try this out and see what I’ve been missing.

A grumble of thunder and a wisp of gray cloud looming over the pass motivates us all to keep moving. Just before we reach the pass we catch our first glimpse of the snow-white peak of Tashtambek-Tor-Bashi peeking through. We reach the pass just in time to catch a better view before a wave of clouds begins to obscure the peak. Just then we feel the first rain drops, and by now, we know the drill. Away go the cameras and out comes the rain gear in record time. 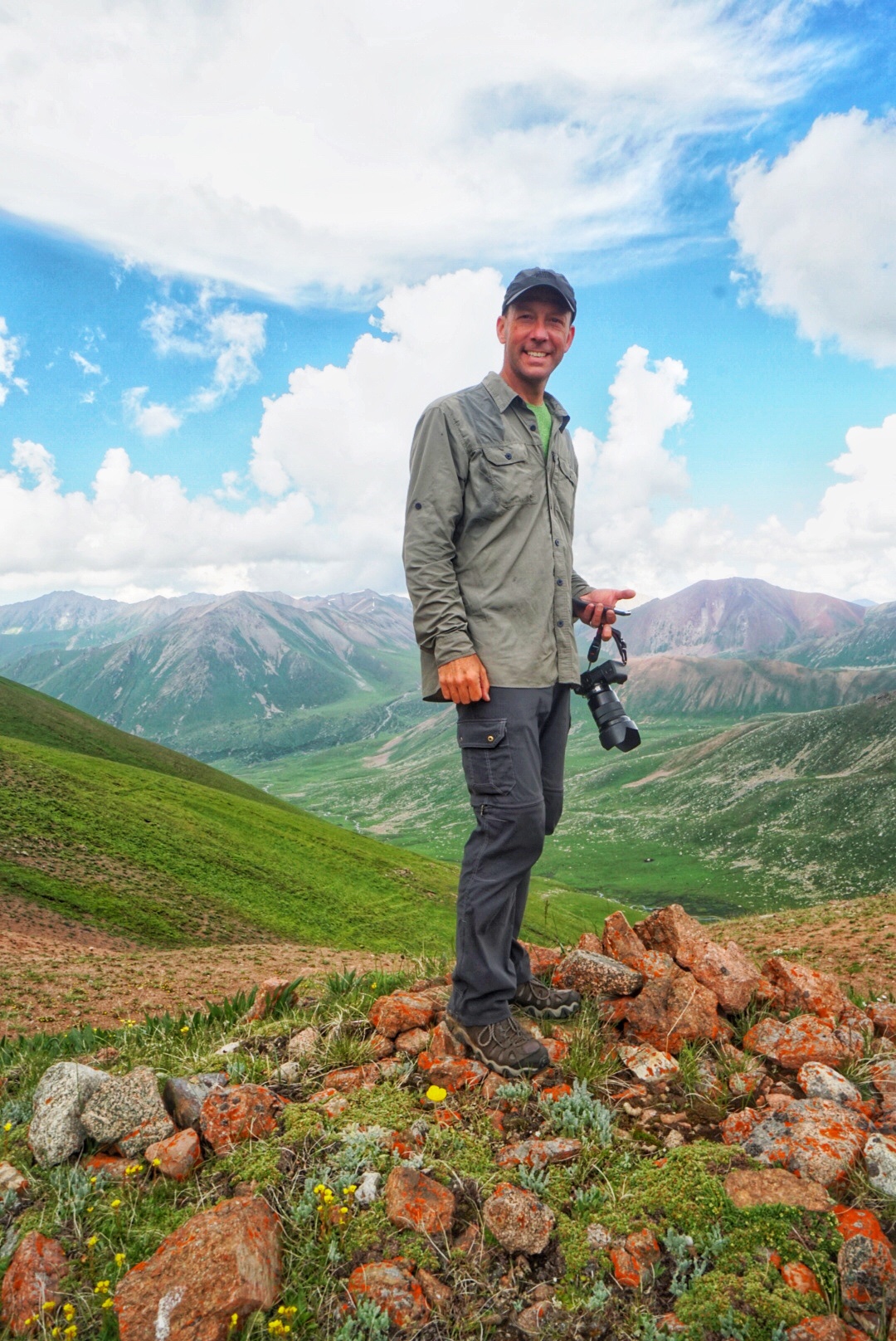 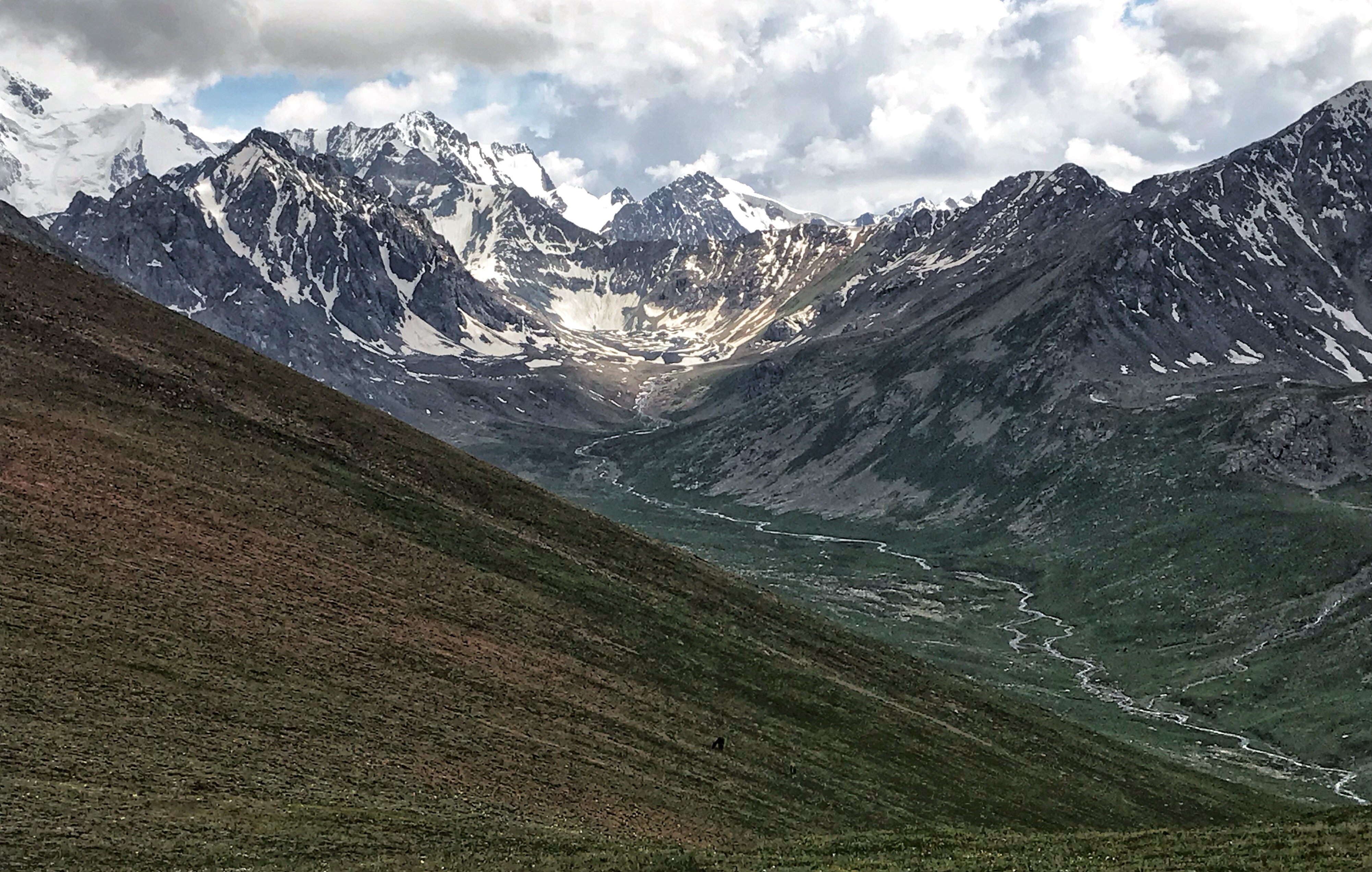 We start the march downhill following no real path and yet somehow finding “steps” down the mountain. As we do so we get lightly pelted by grauple. We are accustomed to the on-again-off-again weather which alternates between light rain and sunlight about every 10 minutes. Still, it’s a bit annoying to constantly adjust to stay either warm and dry or cool. 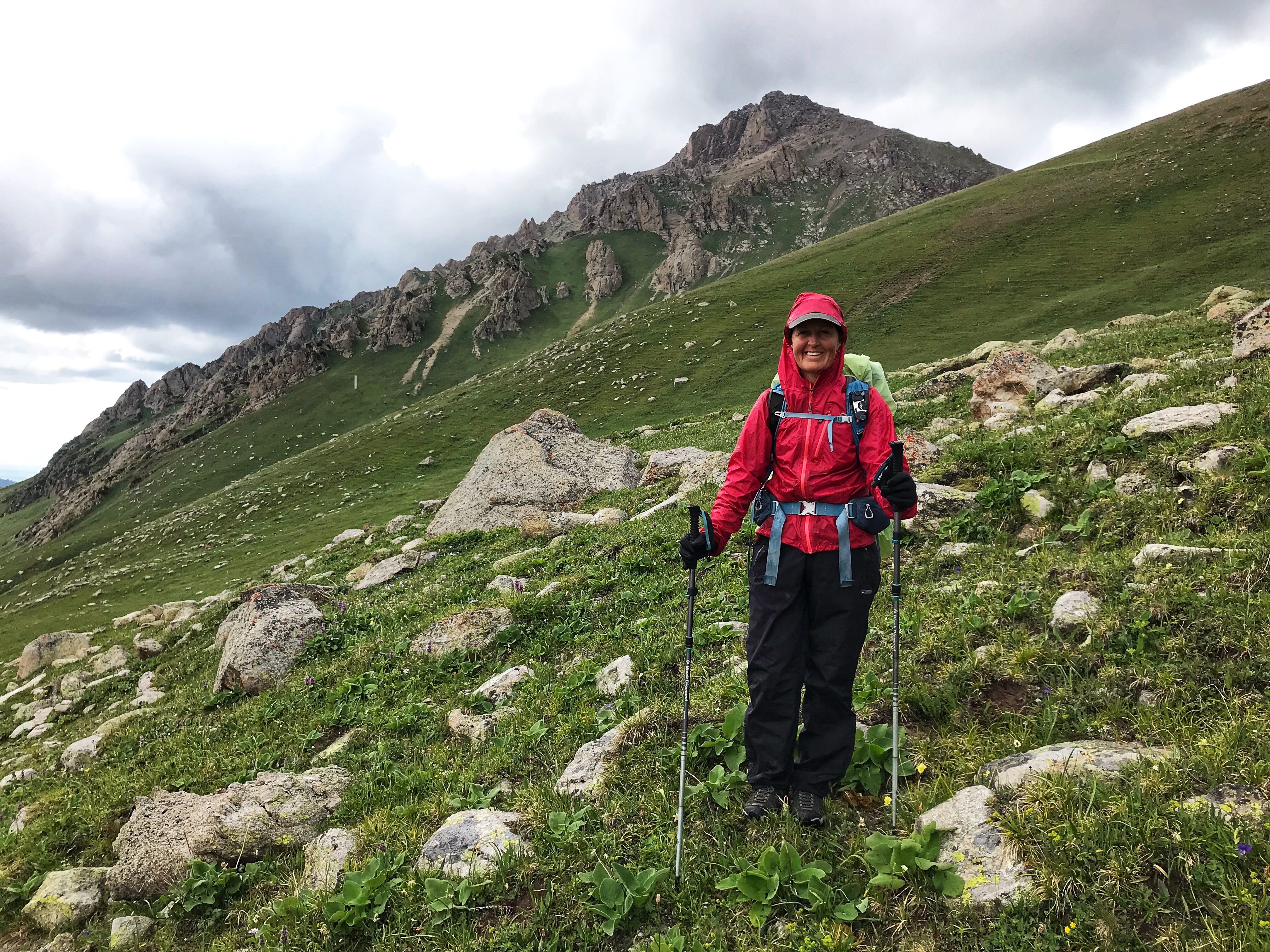 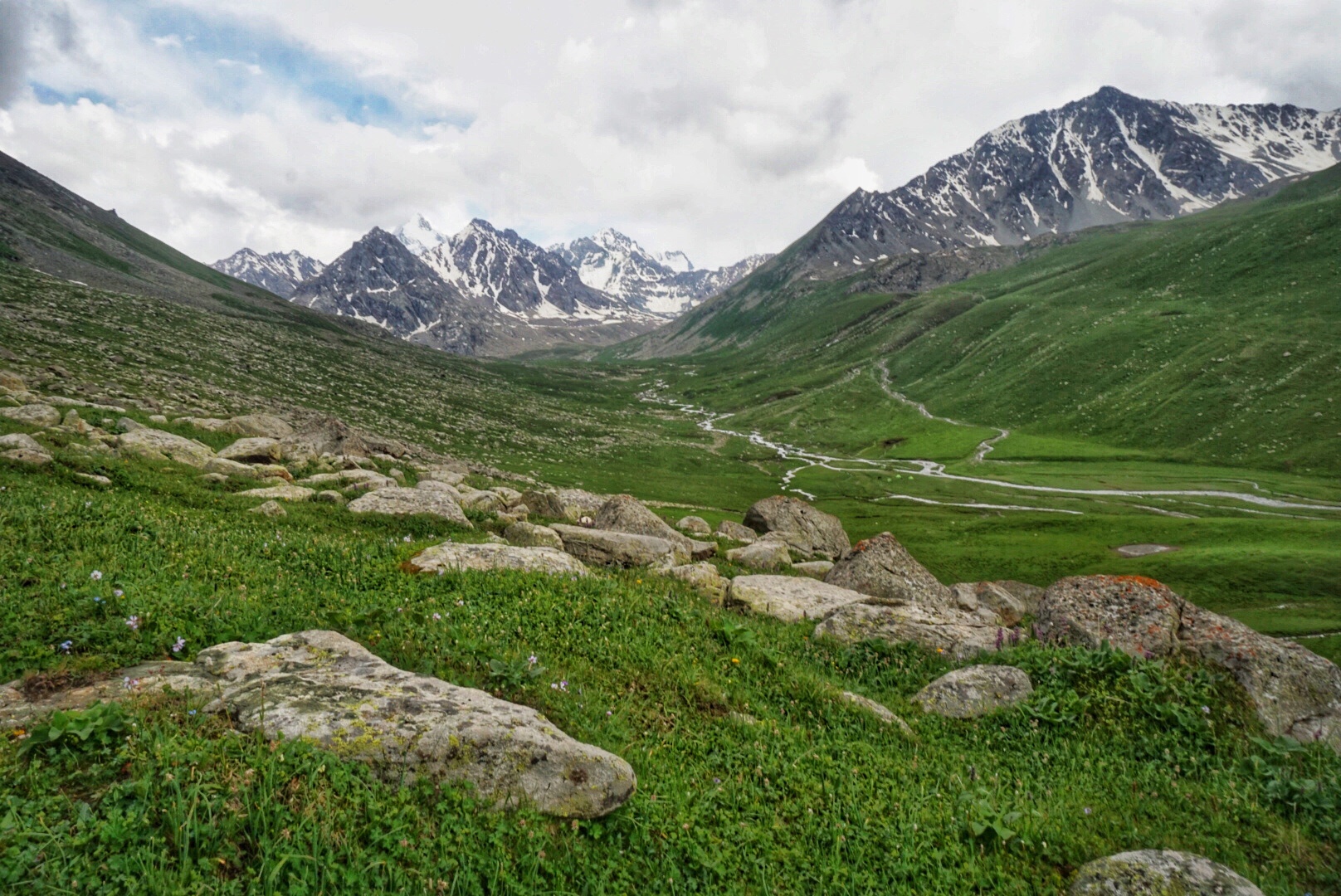 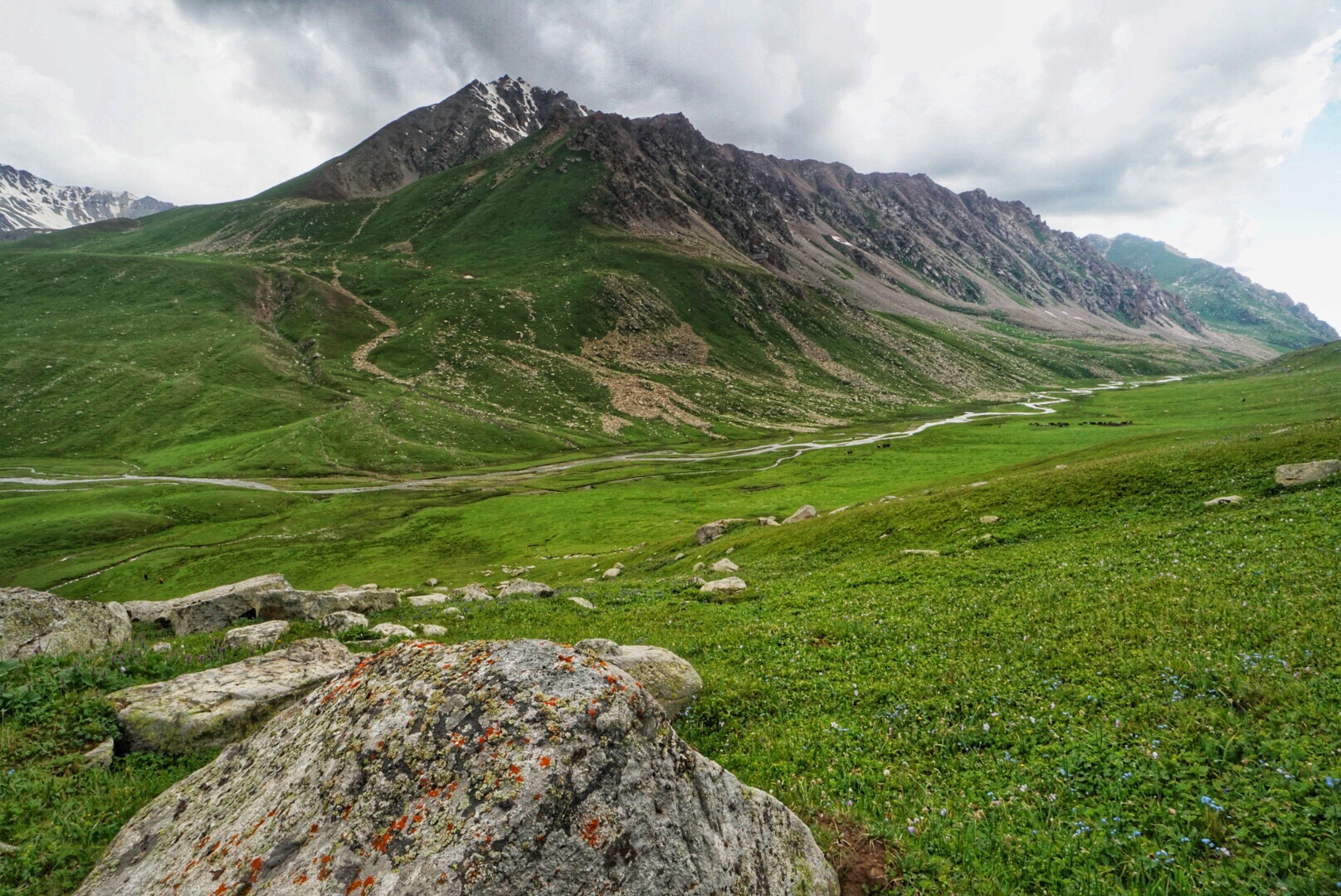 As we come down, we can see one lone tent and a single horse camped between two branches of the stream that comes down from the mountain. The scene is dramatic, with yet another curtain of mountains framing the end of the jailoo and the peak of Tashtambek rising behind them.

This seems like a tranquil place to spend our last night…until we spy a line of horse trekkers coming towards us from down the valley. We pick up the pace so that we can grab a suitable place to camp and pitch our three tents. Soon we find our spot atop a grassy knoll and pitch camp. Little do we know that a large group of approximately 25 horsetrekkers are arriving on their first night of a week-long journey from Jergez to Jety-Oguz.

After filtering water by the stream in the afternoon sunlight, we relax inside our tent with the flap open facing toward the mountain. As we write and watch the world go by, a steady stream of South Korean trekkers walks by and begins to join the growing number of tents and horses gathered between the streams. 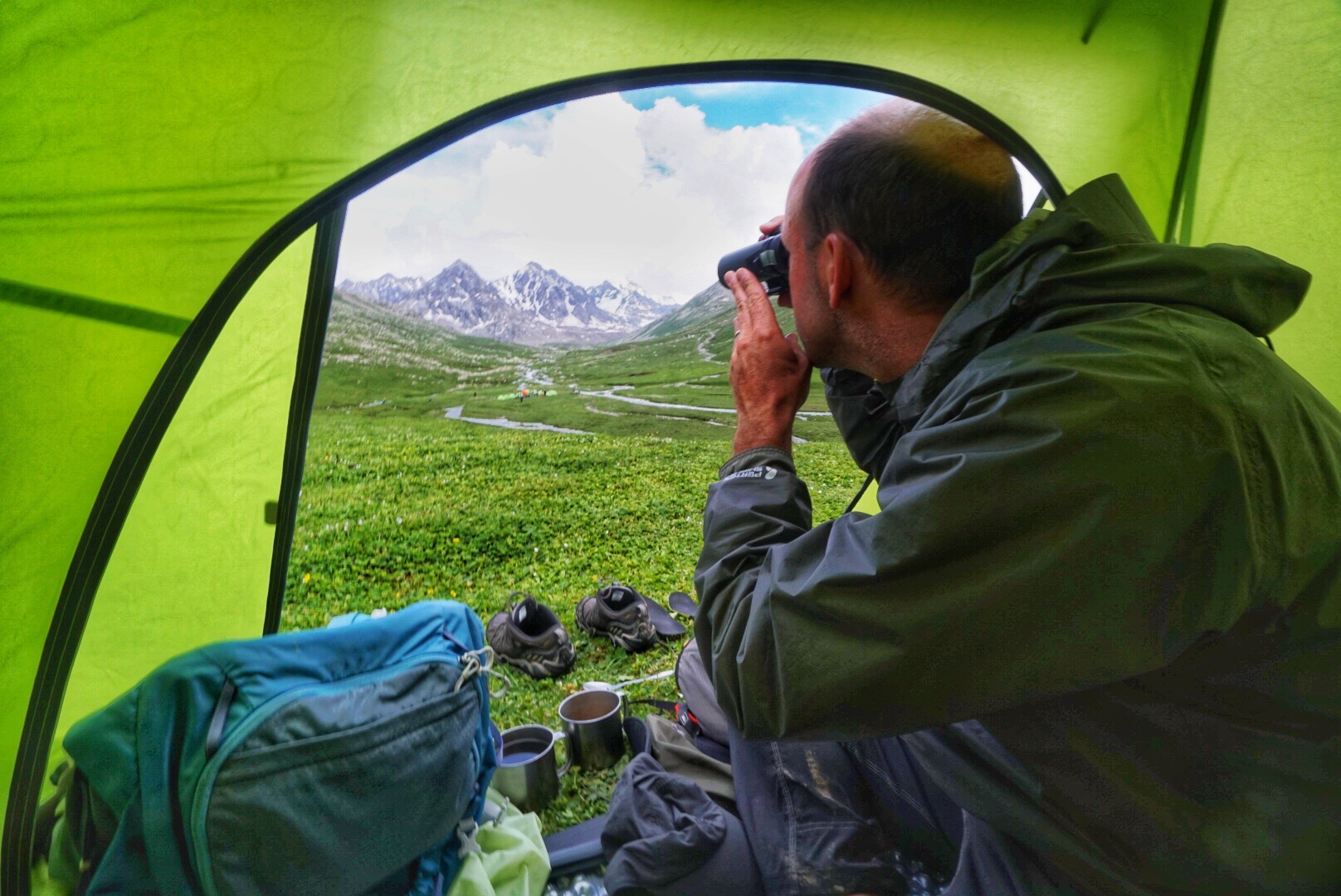 Several trekkers are confused about the route they should take and wander into our camp asking directions or thinking we belong to their camp. One after another more trekkers arrive; and one after another, more and more horses laden with gear and supplies follows after them.

Soon a small village has formed. There are at least 15 sleeping tents, two dining tents that resemble old army barracks and a cooking tent. It’s really quite a spectacle, especially since, until this moment, we have seen a total of 5 other trekkers on this route.

Dinner arrives and distracts us from the people watching. We step out of the tent to stretch our legs while we eat standing up. It’s our last night, and the boys have served us a meal fit for a horse. The potato onion lentil stew really hits the spot.

As we are sipping our tea, the sunset catches our attention. We grab our cameras, once again, and head for a prime vantage point. Over the course of 15 minutes, the sky turns golden red and lights up the mountains behind and to the right of us.

Down the valley, the clouds turn yellow and orange as the stream glows with color. It’s all over in no time, but we feel so fortunate to have caught another magical moment in the mountains. The gorgeous sunset was a fitting end to a day filled with magnificent scenery from start to finish.

Hi! We are Matt and Alison, two Chicago-based school teachers with an insatiable passion for hiking and photography. We spend our summers hiking all over the world and the school year planning our next big adventure! For the past dozen years, we have been on a mission to hike/trek/backpack the classic hikes of the world, documenting our journeys with countless photos of the gorgeous scenery and fascinating cultures we encounter along the way. We have written two books related to hiking, Plan & Go: The Wonderland Trail and Hiking Photography (Sandiburg Press).