48 hours of travel time, less than 6 hours of sleep, capped off with 13 miles of hiking.  What a whirlwind!  Where am I?  Is this real?  Certainly many moments have had extremely dreamlike qualities… but we’ll get to that.  Suffice it to say, I’m in it now, the adventure has truly begun!

Also their nesting areas and guardians.

The last time I traveled by airplane was the year that COVID spread around the planet.  The airports then were eerily quiet, security lines were practically non-existent, and safety protocols were mandatory and heavily enforced.  My, how times have changed!

Regulations have gotten a little easier, though entirely more confusing.  Summertime is just around the corner, schools are letting out, and after two years of encouraged isolation with social distancing people are ready to travel to visit loved ones or to see that far away place they’d been dreaming of.

Needless to say, each of the five airports I went through were swarming and every plane I flew in was packed like a can of sardines.  Security lines were long and tedious.  Six feet of social distancing was practically impossible and nearly forgotten it seemed, remembered only by the occasional faded stickers on the floor which were generally ignored.

I went through security checkpoints twice and one immigration checkpoint and not once was my COVID vaccination and negative PCR test documentation checked by an authority.  Masks were absolutely required inside the airplanes and theoretically they were at the airports as well but I saw many going about without. I’m still unsure whether the hours of frustration trying to procure QR codes for my vaccinations were worthwhile.  Time will tell in that regard since my travels and border crossings are far from over.

One of my other concerns, as mentioned in a previous post, was being able to get a couple key pieces of gear through in my bag which I had chosen to attempt to get through carry-on the entire way.  Particularly, I had a tent pole and snow-spikes that I knew could be contested by a TSA agent following protocol to the letter or just having a bad day.  My initial security check turned out to be the only time when my worries were founded.  They held my bag in the x-ray machine for notably longer than anyone else while another agent was called over.  A brief discussion occurred with some finger pointing and questionable glances towards me but when the bag finally emerged it came to me without the inquisitive agents and I was successfully on my way.  The tent pole had been heavily taped to the frame of the pack and the snowspikes were rolled up in the middle of my sleeping bag, packed tight in a stuff-sack, and buried under the rest of my gear.

Other than that my five airport experiences, four flights, and one train leg went relatively smoothly.  Two of the connections were only a half hour and I did find myself running to get to the gates due to slight delays, but I made it both times breathing heavily and certainly with elevated temperature… good thing they never laser scanned my forehead to check!

Immigration in Lisbon was insane but luckily I had many hours there to get through it.  There must have been 2,000 people or more and while they had ropes set up it was far from adequate.  The “line” where the ropes ended snaked for a quarter mile down one corridor and back, up a staircase and back down, and more.  Every time another airplane unloaded the passengers would arrive confused and many would crush up to where the ropes were, effectively cutting off the attempted line. 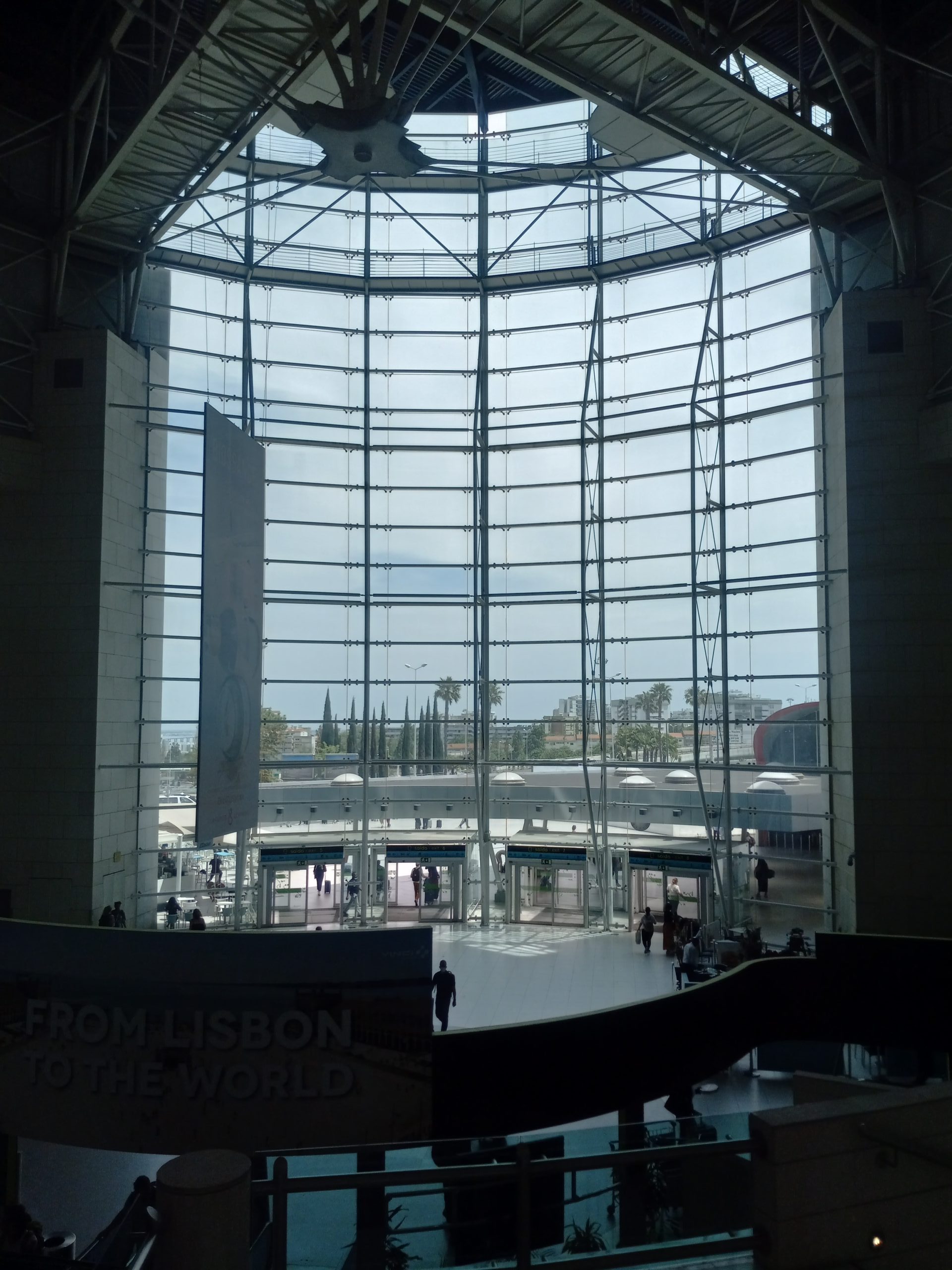 The flight to Paris put me in at 11pm.  Quick tip, break down a large bill in the country or area you’re traveling to early on the evening!  The smallest denomination I could get out of the ATM was €20 and at the late hour I arrived I could not find anyone or anywhere to break change for me (the bus I wanted to take was €1.90).  Eventually I came up with a solution which was to take a different, more expensive bus but one which I could by a ticket for from a machine with my plastic card.  This bus took me to a very closed down Denfert Rochereau station which turned out to be conveniently less than a mile from the train station where I needed to be for my early train.  So I hoofed it on over to see if I could find a place to sleep for a couple hours. 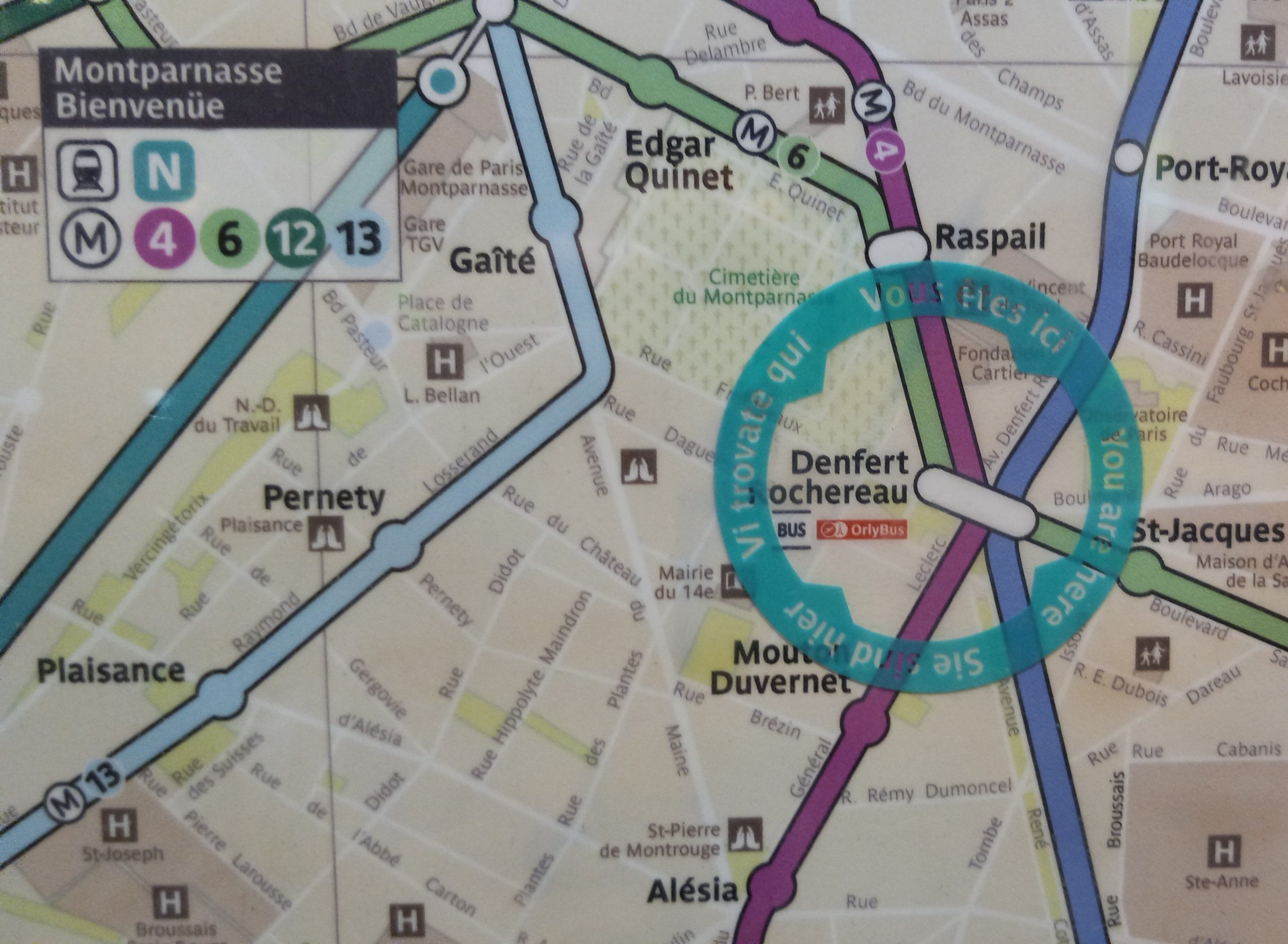 When I got to the Gare Montparnasse, located on a slight rise in the city, a beautiful sight greeted me.  Looming not too far away was the well lit icon of this romantic city,  the Eiffel Tower.  With four hours to kill I found myself pulled towards it like a moth drawn to a flame.

I had not yet acquired a SIM card so navigation was a little tricky (I only remembered my Gaia app later).  I thought I’d be okay just focusing on the giant tower that was my destination, but often I found it concealed by large, beautiful, old French apartment buildings.  Eventually I emerged in the parks that surround the area and from there it was no problem.

The gardens are in full bloom this time of year.  While I couldn’t properly see their beauty, I could certainly smell it.  In the daytime this area is almost always very crowded with tourist and local shwag merchants but at 3am the only people around were laughing lovers and tired drunks. I ate my last packed sandwich and stretched out in the grass, which was the first time I’d been able to go horizontal in over 36 hours.  A welcome respite to lay my head on my bag and feel the solid support of the Earth beneath me.  Restoration work is being done on the tower and I could see people with their headlamps repelling down the sides of the tower, what a job that would be!

For fear of falling soundly asleep and missing my morning train I only stayed for an hour or so then retraced my footsteps back to the Gare Montparnasse.  Round trip- 5.4 miles total. 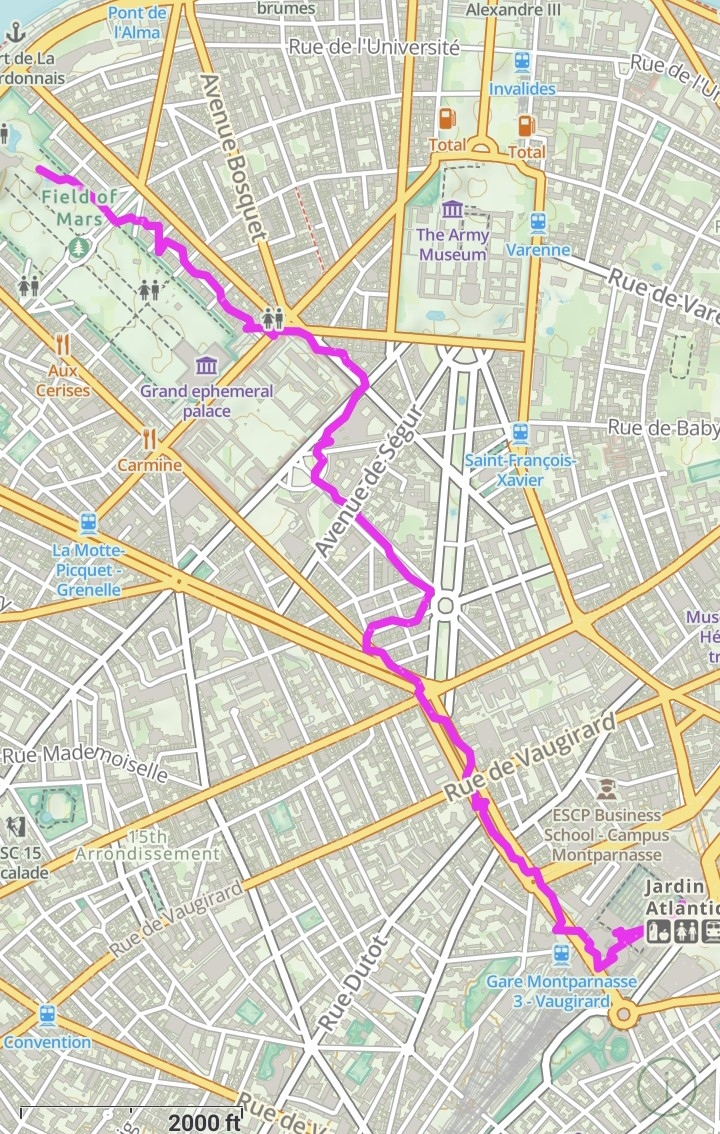 A Small Section of the GR34

Catching the train was no problem.  I had the foresight to look into getting to Hendaye, where I will begin the HRP in a couple weeks, and I’m glad I did because many of the trains were full and those that hadn’t yet reached capacity were getting expensive.

The train was direct and the final destination was where I was going so I had no problem finally catching a couple hours of uncomfortable sleep.  My body was at the breaking point so despite being cramped I passed out easily.

I awoke at the station and gathered myself for the short walk to Dinard where I would meet up with my extended family.  It was raining rather hard and so I steeled myself reasoning I’ll likely be doing a lot of rain walking in the not to distant future.  Of course it stopped after 20 minutes or so and in hindsight I realized I should have dipped into a café for a cup of coffee and a croissant. 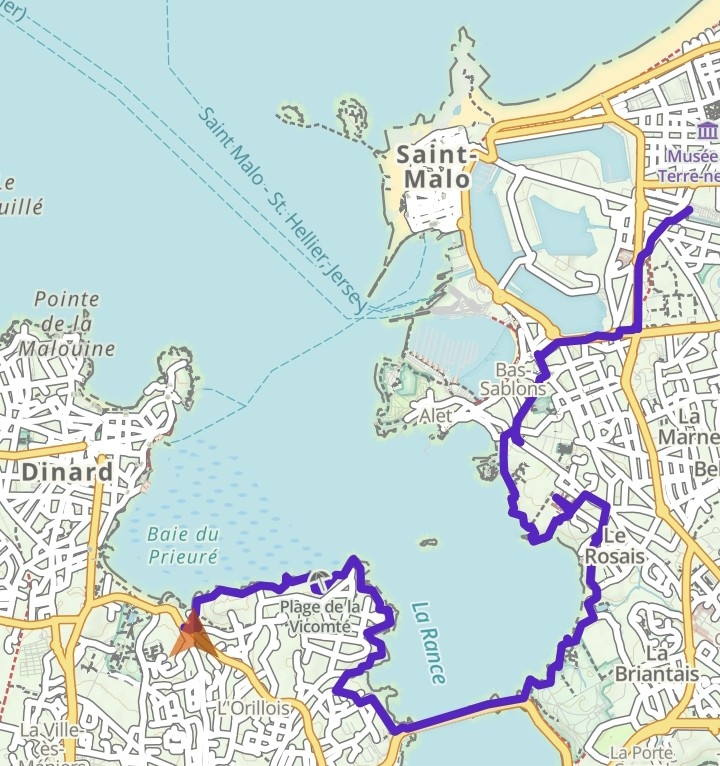 But I was on my way, and soon enough linked up with the GR34, a well-marked long distance trail that follows the entirety of the North coast of France.

The clouds burned off, the sun shone through, and the birds began singing loudly.  Most of the section I walked was wooded following the bluff above above rocket coast and blue Channel waters.  There are many steep rises and descents, quite slippery due to the recent rain.  Most have built in steps, simple log retainers, but caution is still advised.  Total milage on the GR34- 6.7 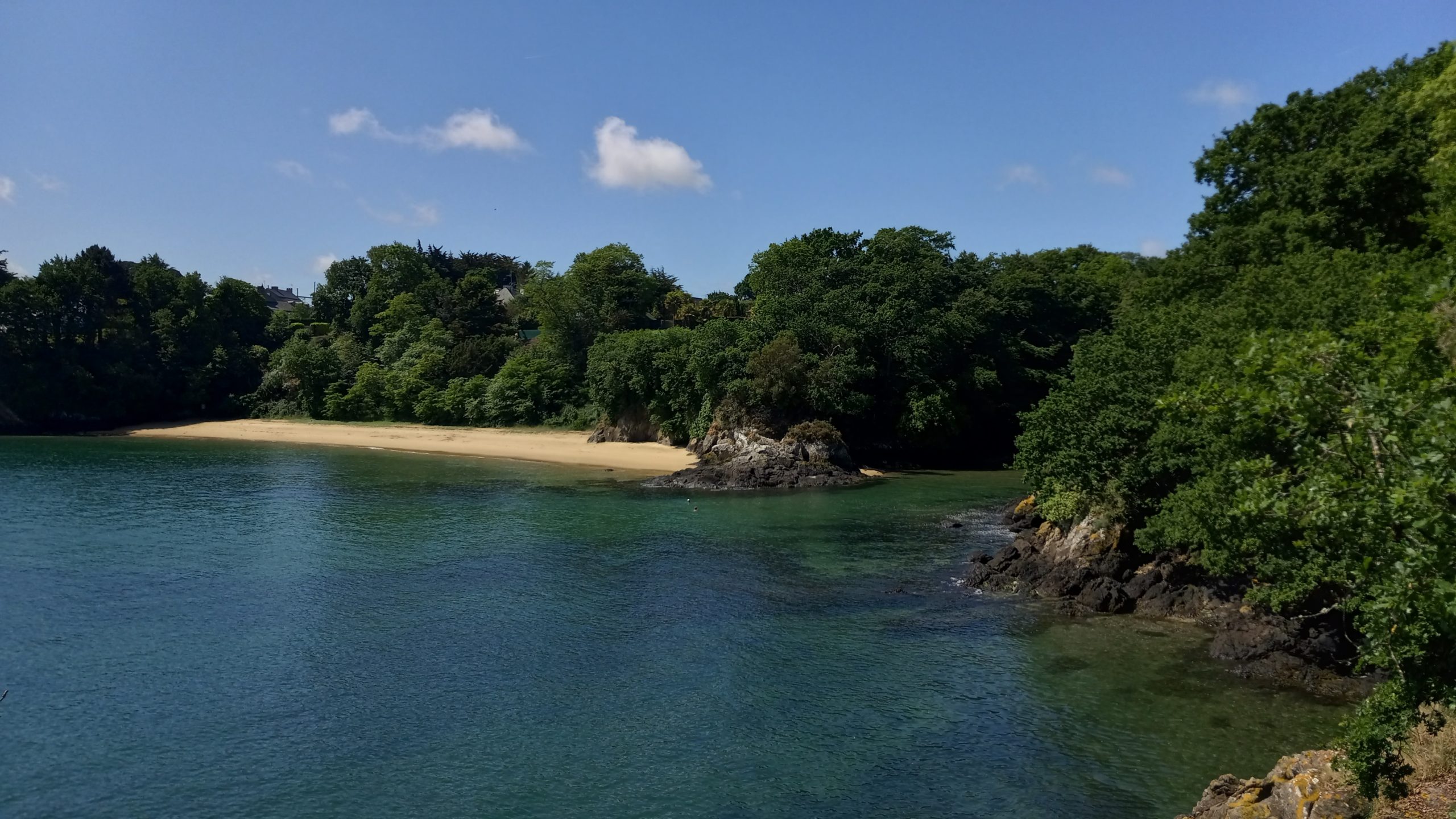 It was a lovely beginning to this adventure and a refreshing reunion with the land of my maternal ancestors.  I’ve settled in now with uncles aunts and cousins, been to the marché to stock up on veggies and stinky cheese, and am ready to relax for a little while before starting the first big leg of my long distance hiking in Europe this summer.

For more pictures of my first day here (Total Milage ~ 13.5) please visit my Instagram if you’re interested, the link is on my author page.  A bientot, bissous!